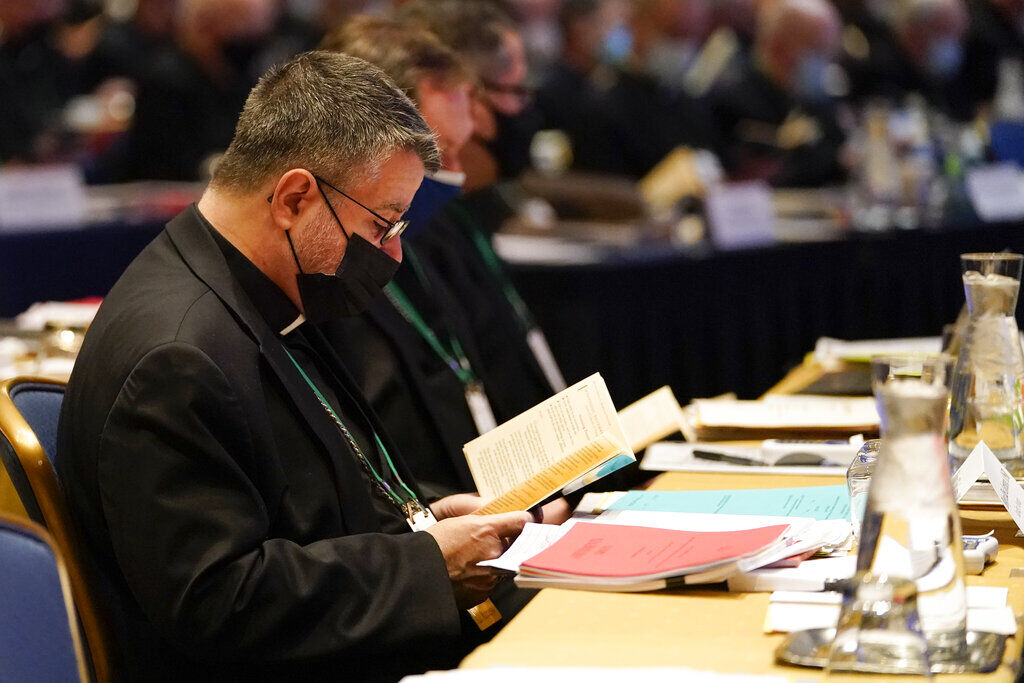 Bishop Elias Lorenzo, of the Roman Catholic Archdiocese of Newark, N.J., reads scripture during a morning prayer at the Fall General Assembly meeting of the United States Conference of Catholic Bishops, Wednesday, in Baltimore. 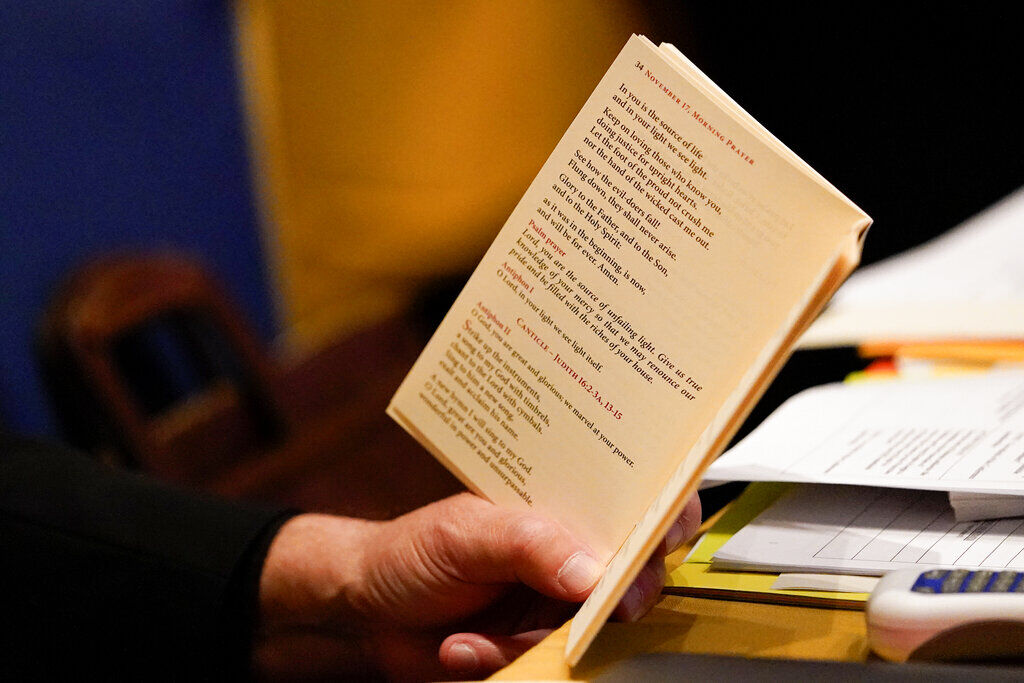 Bishop Manuel Cruz, of the Roman Catholic Archdiocese of Newark, N.J., reads scripture during a morning prayer at the Fall General Assembly meeting of the United States Conference of Catholic Bishops, Wednesday, in Baltimore. 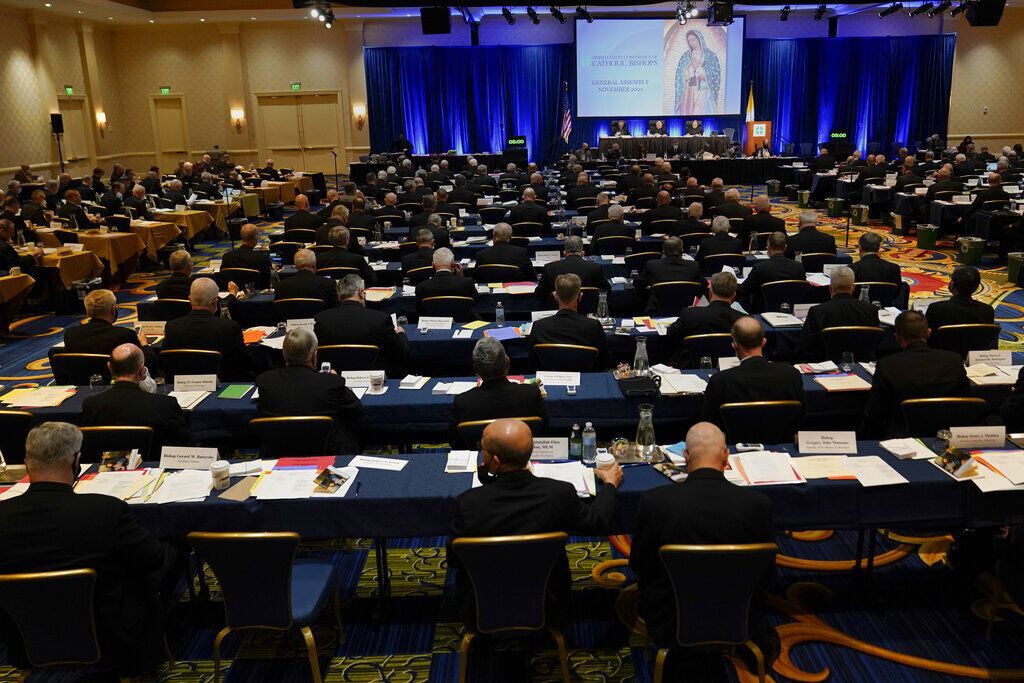 Bishop Elias Lorenzo, of the Roman Catholic Archdiocese of Newark, N.J., reads scripture during a morning prayer at the Fall General Assembly meeting of the United States Conference of Catholic Bishops, Wednesday, in Baltimore.

Bishop Manuel Cruz, of the Roman Catholic Archdiocese of Newark, N.J., reads scripture during a morning prayer at the Fall General Assembly meeting of the United States Conference of Catholic Bishops, Wednesday, in Baltimore.

BALTIMORE — U.S. Catholic bishops overwhelmingly approved a long-anticipated document on Communion on Wednesday that stops short of calling for withholding the sacrament from politicians such as President Joe Biden who support abortion rights but offers plenty of tacit justification for individual bishops to do so.

The U.S. Conference of Catholic Bishops’ first major statement on Communion in 15 years, “The Mystery of the Eucharist in the Life of the Church,” does not explicitly address the debate over elected officials, abortion and the sacrament that has surrounded the document over the past several months and partly inspired its creation in the first place.

Instead, it gives an overview of church teaching, emphasizing the centrality of the Eucharist in the faith and worship and in part reflecting concern among bishops that many Catholics don’t know or accept such teachings.

It was approved by a 222-8 vote at the conference’s fall assembly in Maryland after receiving only minor revisions in recent days by drafters on the bishops’ Committee on Doctrine.

Drafters added a reference to defending “the unborn” along with other vulnerable persons, such as immigrants, older adults and victims of racial injustice. They also bolstered the definition of “scandal” as weakening the resolve of other Catholics to follow church teachings.

The latter revision came in a passage reaffirming a 2006 statement saying it’s a scandal if a Catholic “in his or her personal or professional life were knowingly or obstinately to reject” the church’s doctrines or moral teachings.

The document does not identify Biden or other politicians by name, though it says at one point, “Lay people who exercise some form of public authority have a special responsibility to embody Church teaching.”

It calls on Catholics to examine their conscience and make sure they’re in harmony with church teachings, and says bishops have a “special responsibility” to respond to situations “that involve public actions at variance with the visible communion of the church and the moral law.”

Archbishop Joseph Naumann of Kansas City, Kansas, who chairs the Committee on Pro-Life Activities and whose work includes advocacy against abortion, took the document as affirming the importance of “our responsibility for the care of the souls of these politicians.”

Naumann, wearing a facemask with the words “REMEMBER The Unborn,” called for bishops to find common ground where politicians agree with the church’s vision for “the dignity of the human person.” But he also urged them “not to be afraid to fulfill our obligations to let them know how serious” it is to dissent from church teaching.

Bishop Joseph Strickland of Tyler, an outspoken critic of the president, asked colleagues to amend the document by quoting the church catechism and the Bible as saying anyone who creates scandal would be better off having a “millstone fastened around his neck and to be drowned in ... the sea.”

The proposal was met with silence when put to a voice vote and was not adopted.

The conference cannot dictate a blanket policy on denying Communion to politicians; each bishop has authority in his own diocese.

While some bishops have said they would deny the sacrament to Biden, the archbishop of Washington, Cardinal Wilton Gregory, has affirmed that the president is welcome to receive the sacrament there.

Biden has said that Pope Francis, too, told him in a recent private meeting in Rome to continue receiving Communion. While the Vatican has not confirmed that, Biden did subsequently go to Mass and receive Communion at a church in Rome — evidence that Francis did not forbid priests in the Diocese of Rome, which he oversees, from giving Communion to Biden.

The document highlights the centrality of the doctrine of transubstantiation, which says that when a priest celebrates Mass, the bread and wine is transformed into Jesus’ actual body and blood. It says Catholics can perceive this as a reality through faith, even though the elements appear to the senses to be bread and wine.

Some bishops have expressed concern over Catholics’ acceptance of the doctrine, citing a 2019 survey that found most church members don’t believe in transubstantiation. Other researchers have questioned that finding, however, saying that when survey questions are phrased differently, higher numbers of Catholics align with church teaching.

Auxiliary Bishop Andrew H. Cozzens of Saint Paul and Minneapolis, who is spearheading efforts to increase Eucharistic devotion, said the statistic that “convinced the bishops there was a crisis ... was the fact that 75 percent Catholics don’t go to Mass on Sunday. If people believed in the Eucharist, how could they possibly miss Mass on Sunday?”

The document also says the sacrament is central to church unity and worship and leads to “personal and moral transformation,” motivating believers to take care of vulnerable people and, in a broader sense, the environment.

Bishops began working on the document after Biden took office, with some citing “confusion” over the president presenting himself as a devout Catholic despite his political stance on abortion.

The Vatican repeatedly sent caution signals to the U.S. bishops as they prepared the document.

The papal ambassador to the United States, Archbishop Christophe Pierre, on Tuesday urged bishops to listen before they teach, even in situations where some want to clarify “confusion.” And earlier this year, the head of the Vatican’s doctrine office urged bishops to go slowly on the document, pursuing dialogue among themselves and with Catholic politicians.

Copyright 2021 The Associated Press. All rights reserved. This material may not be published, broadcast, rewritten or redistributed without permission.