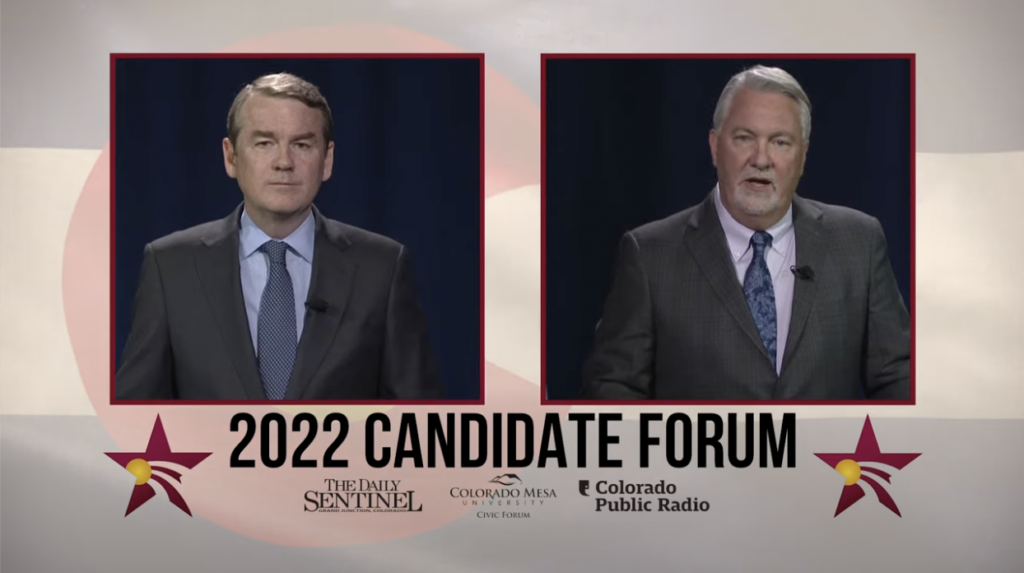 The race for Colorado’s U.S. Senate seat returned on Tuesday to the Western Slope, where incumbent Democratic Sen. Michael Bennet and Republican challenger Joe O’Dea debated the issues in a region significantly impacted by both the clean-energy transition and a historic megadrought fueled by climate change.

O’Dea, a first-time candidate and Denver construction CEO, returned again and again to a central theme of his campaign, stressing the need to reverse course on what he called a “war on energy.”

GET THE MORNING HEADLINES DELIVERED TO YOUR INBOX

Responding to a question on accommodating asylum seekers from Afghanistan, he told moderators, “We’ve got a foreign policy right now that doesn’t involve our energy.”

And when asked by moderator and CMU student Halima Behroz how the United States should help promote access to education for women and girls in developing countries, O’Dea pivoted again to the “price of diesel at over $5.50 a gallon,” which he said prevents the U.S. from helping “other countries with their issues.”

The last answer drew a rebuke from Bennet, who is seeking a third full term in the Senate in a challenging midterm election year for Democrats.

In the first of two televised debates ahead of the Nov. 8 election, both candidates cast themselves as pragmatic moderates who would reach across the aisle and represent Coloradans of all political stripes, including those rural parts of the state.

“I would put my record of bipartisanship and of civility up against any other member of the Senate,” said Bennet. “And if you send me back there, I’ll continue to do it.”

In a state that has trended increasingly Democratic in recent election years, Bennet has led O’Dea in polling by an average of more than 8 percentage points, according to elections analysis website FiveThirtyEight.

In his effort to pull off an upset win, O’Dea has pitched himself to voters as a moderate on social issues. He captured the GOP nomination in June with 55% of the vote in a head-to-head primary battle with far-right state Rep. Ron Hanks, who has repeatedly spread false conspiracy theories about the 2020 election.

“I believe that the party system we have here in the United States is broken — I think Sen. Bennet and I probably agree on that,” O’Dea said. “I won’t vote the party line.”

Bennet and O’Dea noted their common ground on a range of issues, including support for a path to citizenship for undocumented immigrants brought to the U.S. as children and other immigration reforms, as well as changes aimed at streamlining federal permitting for energy projects.

“We do need to get the permitting out of the way so we can raise wind, solar, we can raise nuclear, get all of those energies online so we can begin to replace fossil fuels,” O’Dea said. “But it’s not going to happen tomorrow.”

“We just passed the most important renewables bill in the history of the United States of America, and frankly on planet Earth,” Bennet said. “And Joe O’Dea has said over and over again that if he had been in Washington, he would’ve voted against that bill.”

Asked about the future of the energy industry on the Western Slope, where much of Colorado’s natural gas extraction takes place, Bennet promised “bright days ahead” and pledged continued support for gas production and export infrastructure.

“This country is going to lead the transition to renewable energy,” he said. “We’ve got to get to net-zero by 2050 — and even when we get there, we’re still going to be using fossil fuels.”

Fueled by climate change, a “megadrought” that has impacted the Colorado River Basin since 2000 has shattered records to become the region’s worst dry spell in at least 1,200 years. Rising atmospheric concentrations of greenhouse gasses have warmed much of the Western Slope by more than 4 degrees Fahrenheit above preindustrial averages.

Responding to a question about the renegotiation of the Colorado River Compact, the 1922 interstate agreement that governs use of water across the West, O’Dea said that further conservation efforts should be shouldered primarily by Lower Basin states like California.

“We’ve done our job, but the lower states have not,” O’Dea said. “We need to push back on California. We need a leader in there that’s going to hold California accountable and say, ‘Look, the water that you’re claiming as a right doesn’t exist.’”

Bennet again faulted O’Dea’s opposition to Democrats’ climate bill, which contained $4 billion for Western drought resiliency projects, and emphasized for the need for a “federal backstop” of funding to support local conservation and storage efforts across the river basin.

“One of the reasons I really want to go back to the Senate is to help lead the negotiations between the Upper Basin and the Lower Basin,” Bennet said. “The fate of the American West depends on our ability to do that. Our entire way of life, from agriculture to our ski resorts to our entire economy, depends on our getting this right.”