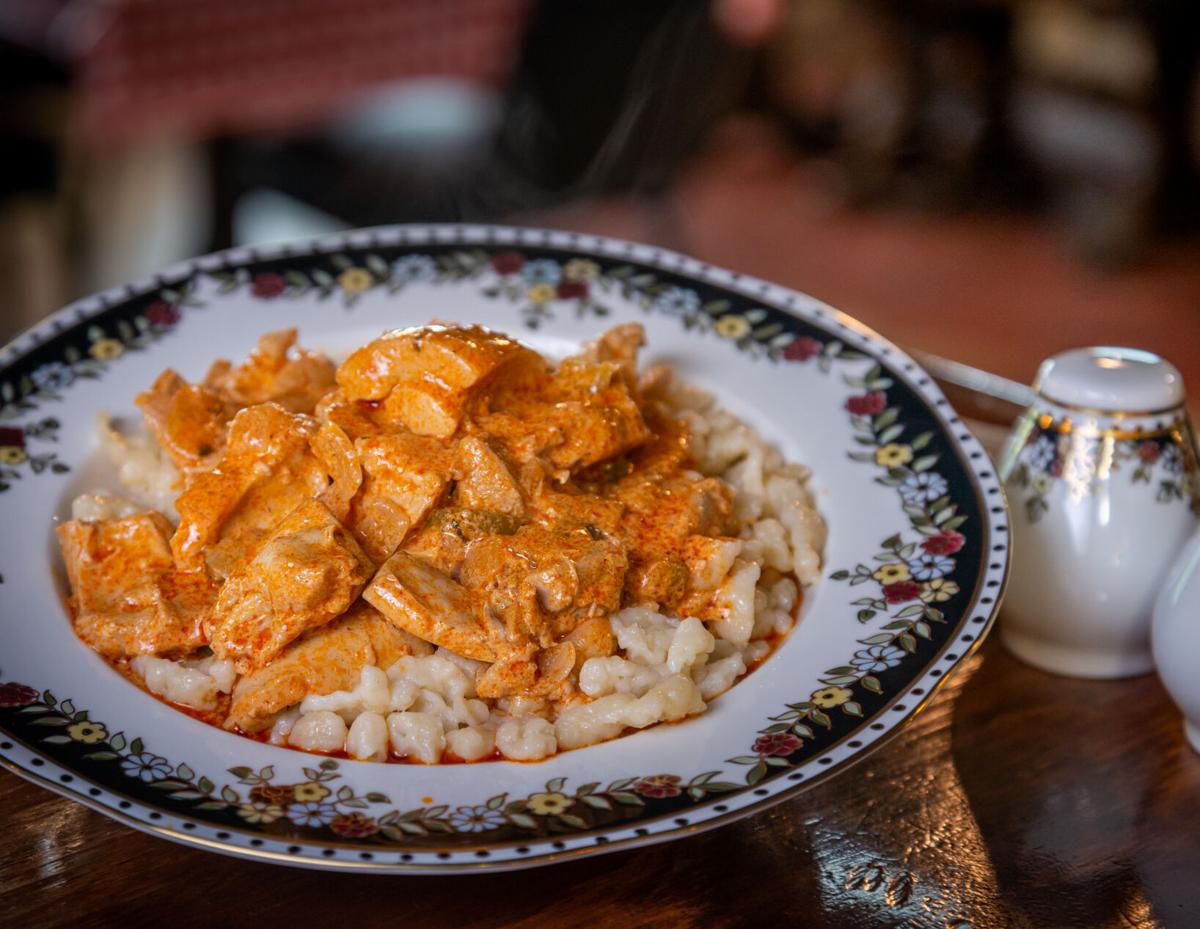 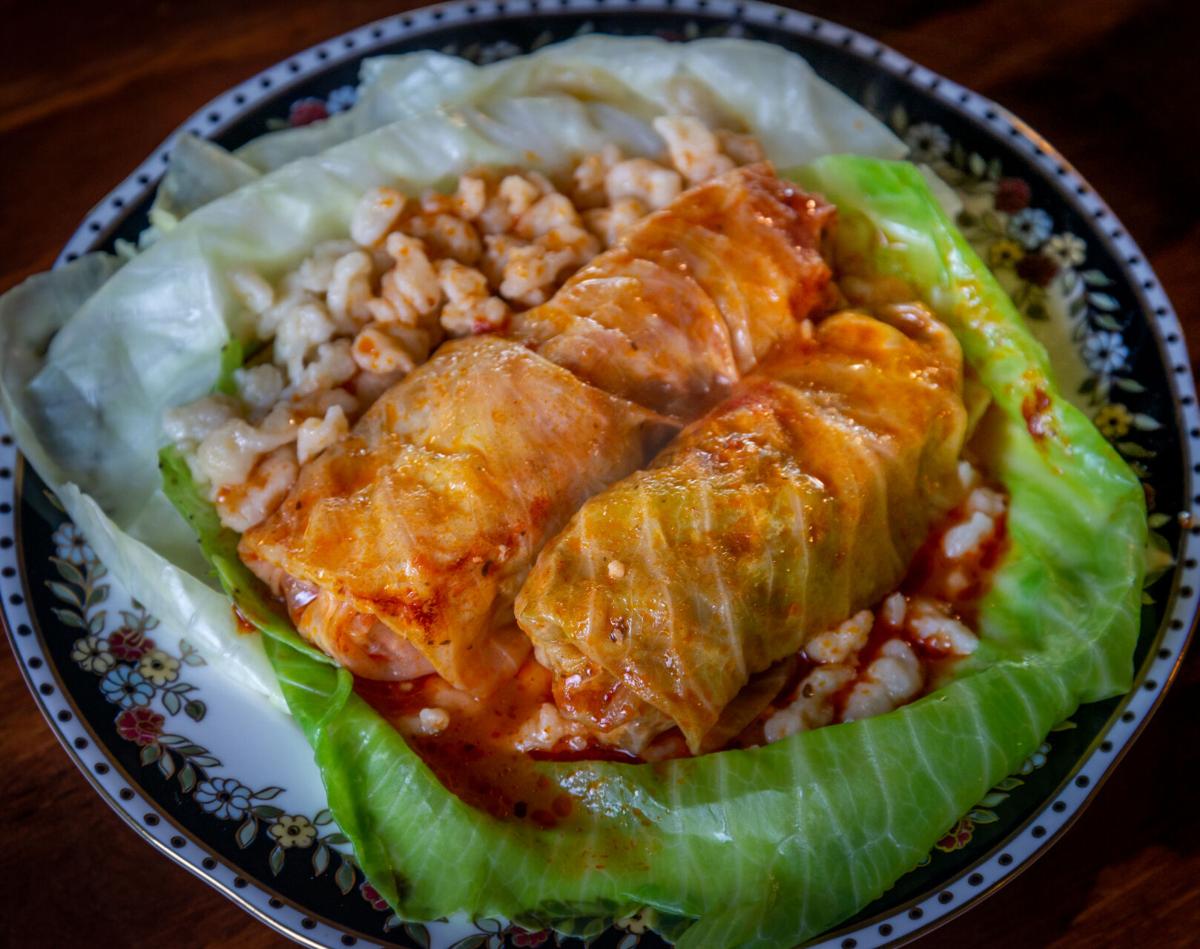 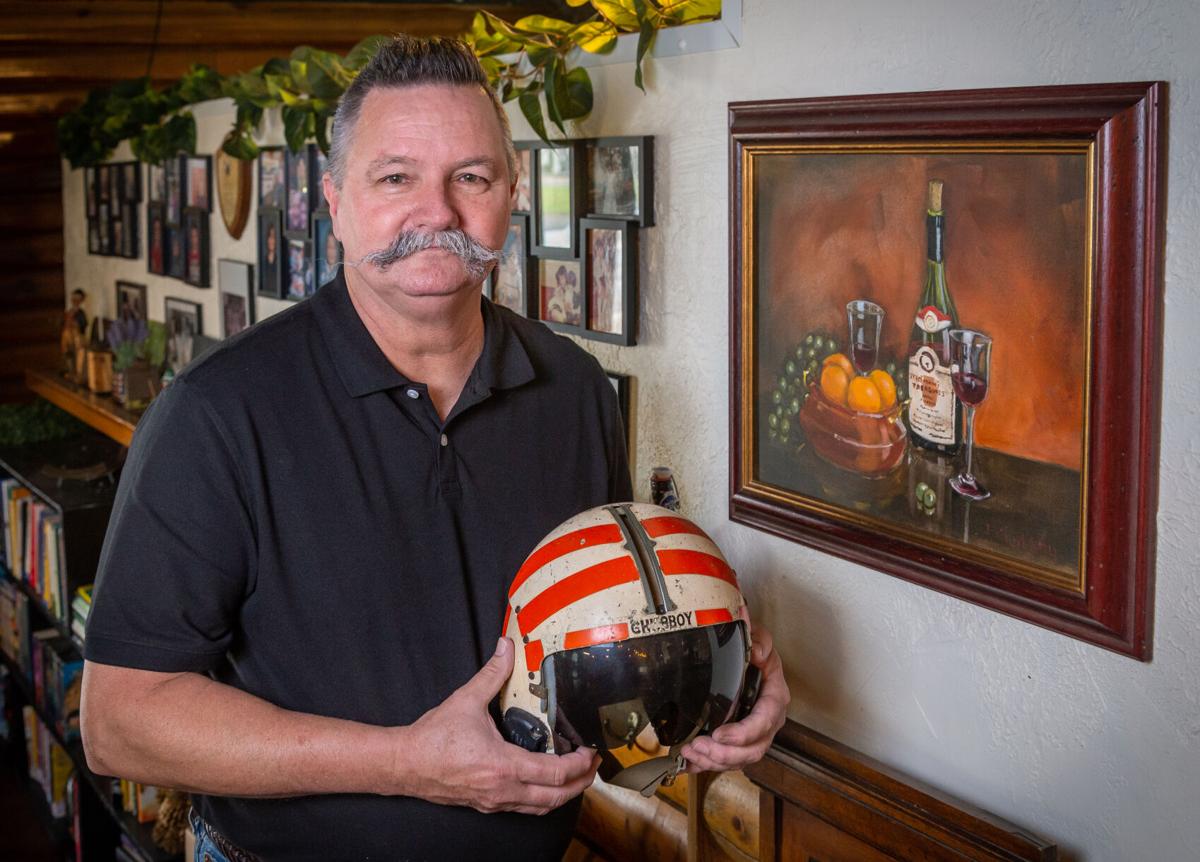 Owner Mike Chubboy poses with his father’s pilots helmet and a painting by his mother Tuesday, September 22, 2020, at Brigitta’s Hungarian Restaurant in Kilgore. (Les Hassell/News-Journal Photo) 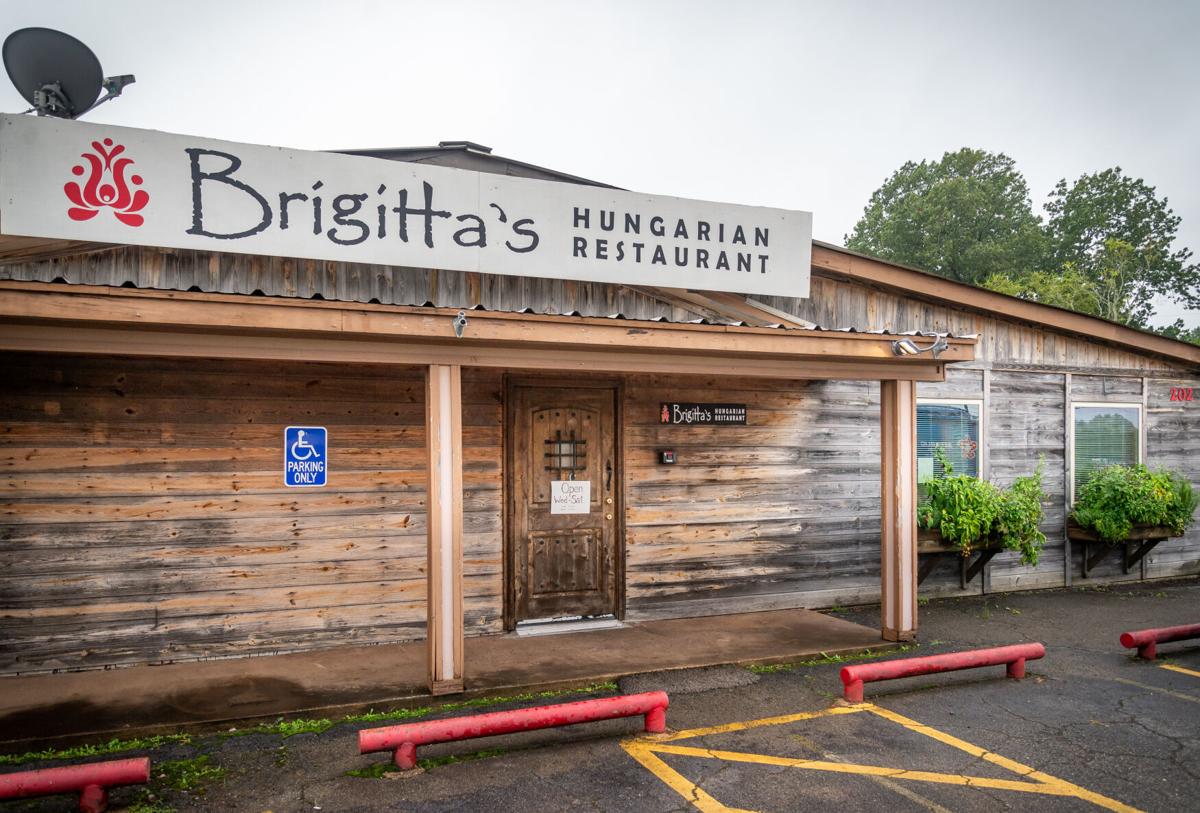 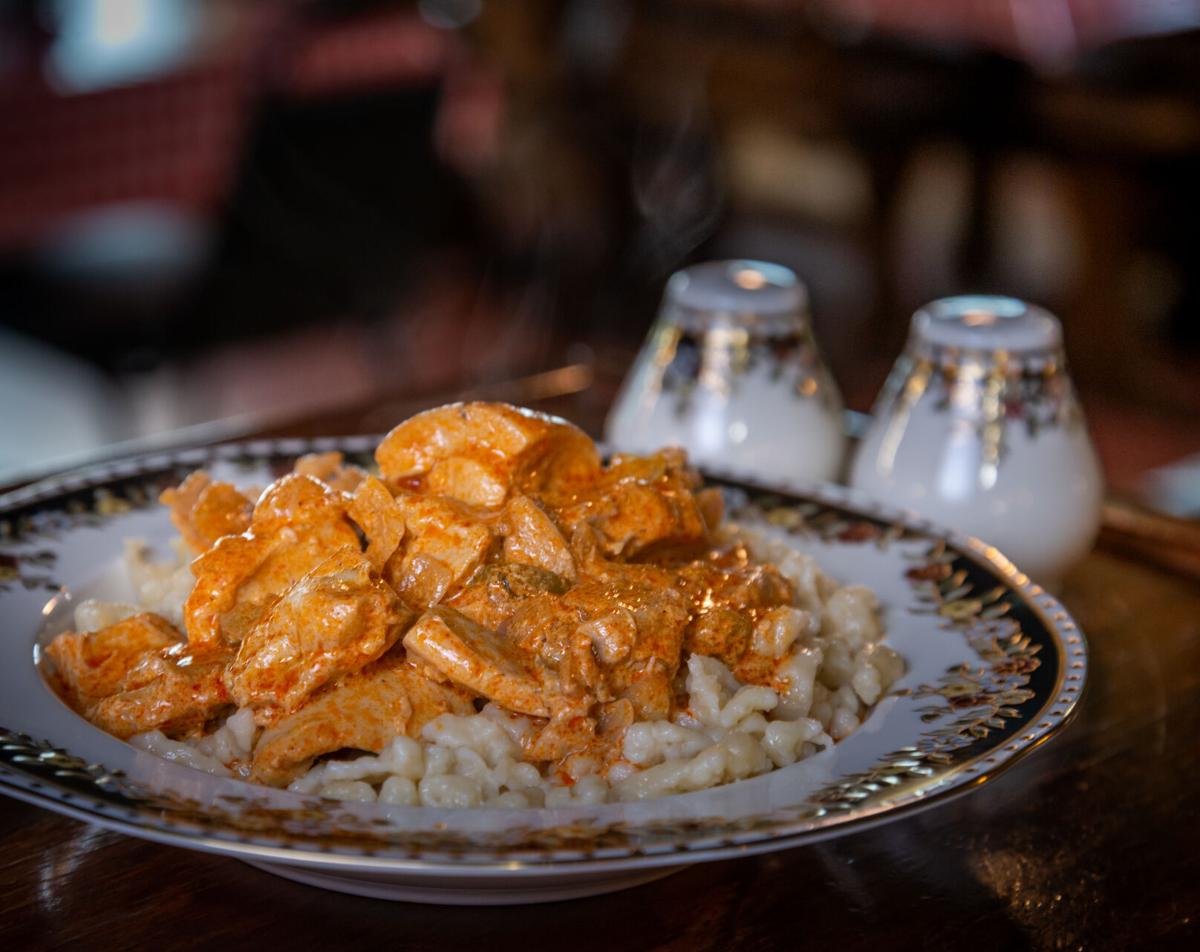 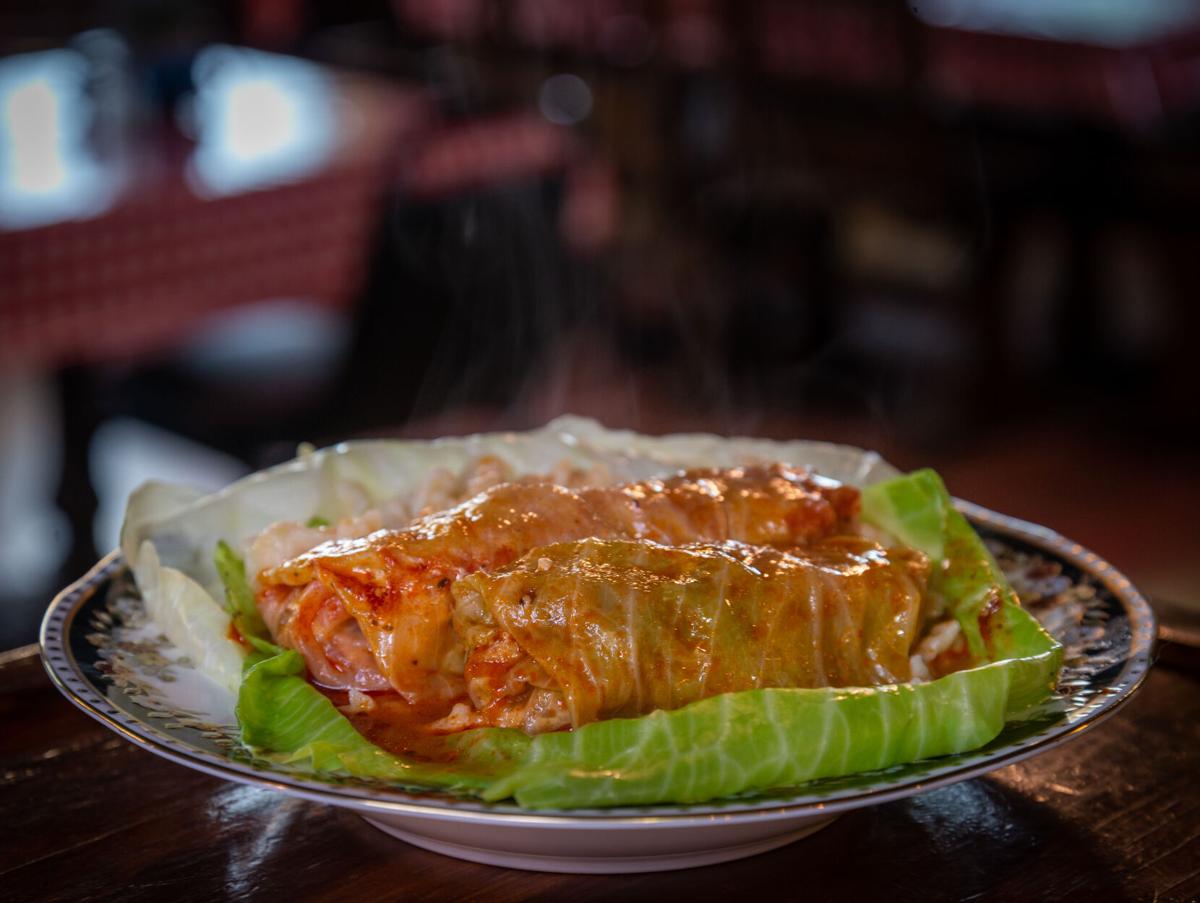 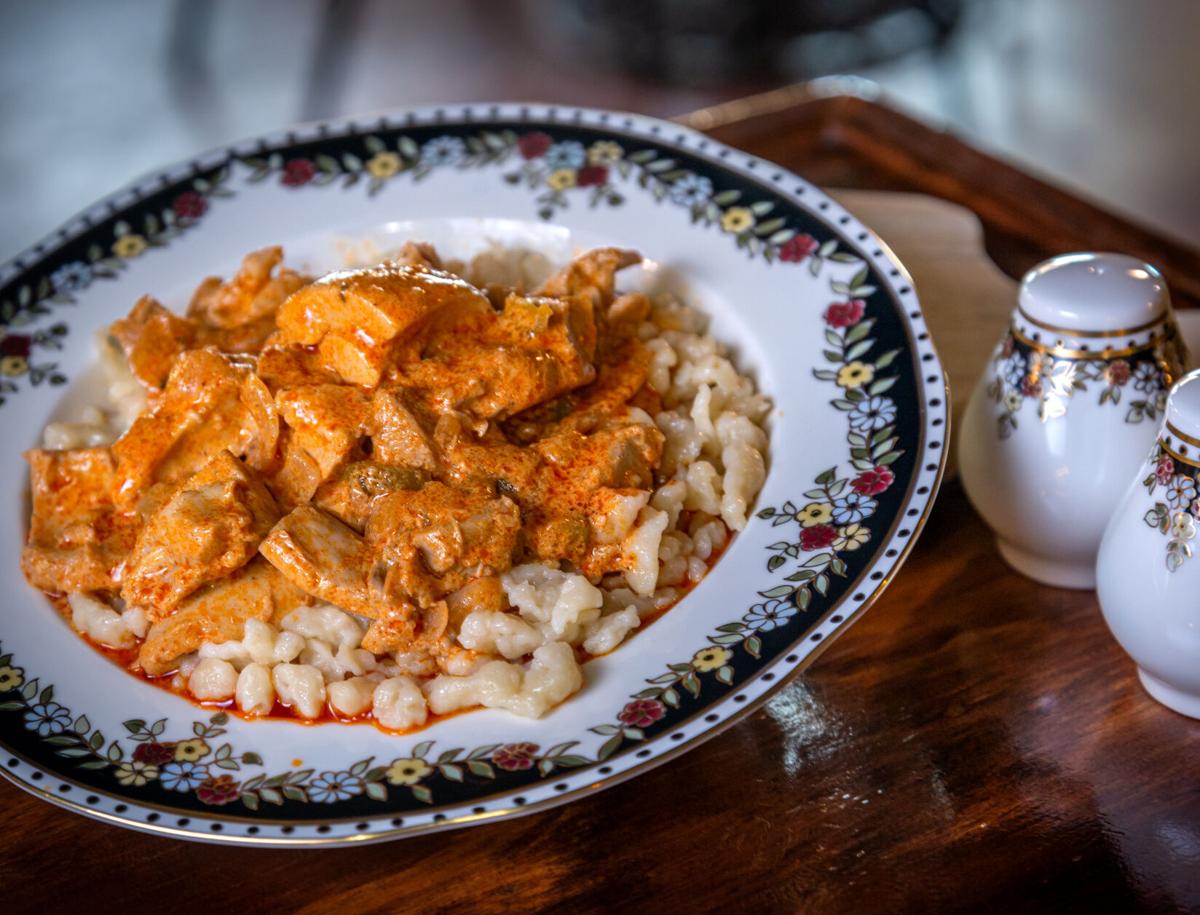 Owner Mike Chubboy poses with his father’s pilots helmet and a painting by his mother Tuesday, September 22, 2020, at Brigitta’s Hungarian Restaurant in Kilgore. (Les Hassell/News-Journal Photo)

Talking with Mike Csabai (more on that surname momentarily) is a little like attending a history seminar, one where the professor becomes so animated and passionate that you forget you’re hearing about events of almost 1,700 years ago.

You also almost forget you’re talking about a restaurant.

But for Mike, food and forefathers are as intrinsically linked as if they are one; and for him, they are.

Mike and his wife, Brigitta Gyfori, have owned and operated Brigitta’s Hungarian Restaurant on Texas 31 in Kilgore since 2017, after relocating to the Kilgore area from Colorado when the market for the high-end foreign furniture and antiquities Mike dealt in tanked. Brigitta is native Hungarian, hailing from the town of Godollo, just outside of Budapest. Mike spent time in Hungary, living there for years and travelling back to hunt through the enclaves for the one-of-a-kind treasures elite designers coveted.

Mike has always preserved his great-grandmother’s “singularly Hungarian” recipes, which his Scottish mother taught him as he was growing up. He tried taking a liberty – once – with one of the tried-and-true concoctions, handed down for generations, and never did it again.

“I dot my Is and cross my Ts with all of her recipes,” he said, laughing.

He never deviates from the way his great-grandmother made her schnitzel, although he does offer a pork tenderloin version served with a perfectly cooked sunny-side up egg on top. The whites are set, but the yolks are runny, melting into the crisp breading on the pork to create a perfect bite.

He also doesn’t try to change the cabbage rolls.

“I make them every day now,” he said. “When we don’t have them on the menu, you can see the disappointment on people’s faces; they deflate right before your eyes.”

The two dishes are in a constant “tug of war” for customer favorite, although they get a run for their money from one of the paprikash dishes (chicken, beef or pork) or the warm cherry strudel, made with homemade cream cheese that oozes into every bite.

However, it really wasn’t until COVID struck that Mike took a deep dive into the family’s history and its link to the food he cooks every day.

This is where he gets passionate, explaining that the Americanized version of his last name, Chubboy, is the easier-to-spell version of Csabai, pronounced Chob-aye-ee. The name was passed down directly from Attila the Hun, whose youngest son, Prince Csabai, didn’t die on the battlefields of what we know as the Transylvania area of the region like his older brothers did.

“I’m really not sure if the story is a myth or the truth,” Mike laughed, “But my correspondence with a Hungarian professor of history and my own research shows it to be the truth.”

Truth or not, at the end of the day, the reason the restaurant is beloved by locals and Hungarian ex-pats alike, is the focus on food and family. The couples’ twin 14-year-olds are often found helping their parents in the restaurant as well.

“Family, pure, plain and simple, is the reason we are here,” Mike said.

Longview musician Jeffrey Odom and his family are faithful patrons of the quaint, rustic eatery, where you can listen to Hungarian radio straight from Budapest or read one of the many history books on the shelves.

“The owners are the reasons we go, well besides the amazing food,” Odom said. “They are the sweetest people. They don’t only bring the Hungarian flavor to East Texas, they educate the clientele on the Hungarian culture which only enhances the experience. It’s a must-have experience, you will not be disappointed.”

“We get take-out from time to time and have eaten in the restaurant a couple of times as well,” he said. “Owners are super friendly and make everything from scratch. Always delicious.”

Mike and Brigitta have been working on establishing their line of frozen prepared foods, “Brigitta’s Hungarian Deliveries.”

In addition, Mike enjoys “breaking the rules” with dishes such as salmon strudel, which features melt-in-your-mouth salmon with spinach and portabella mushrooms, “smothered” in feta cheese and baked in a crisp, flaky phyllo dough.

He also makes his own Hungarian and German style bratwurst sausages from scratch, using no additions or preservatives, that almost need to come with their own warning label.

“These are so juicy they will spit at you,” he joked.

“Food doesn’t have to be complicated,” he said. “I always just think, ‘What can I do to make it stand out and make sure it’s superior on someone’s palate.’”