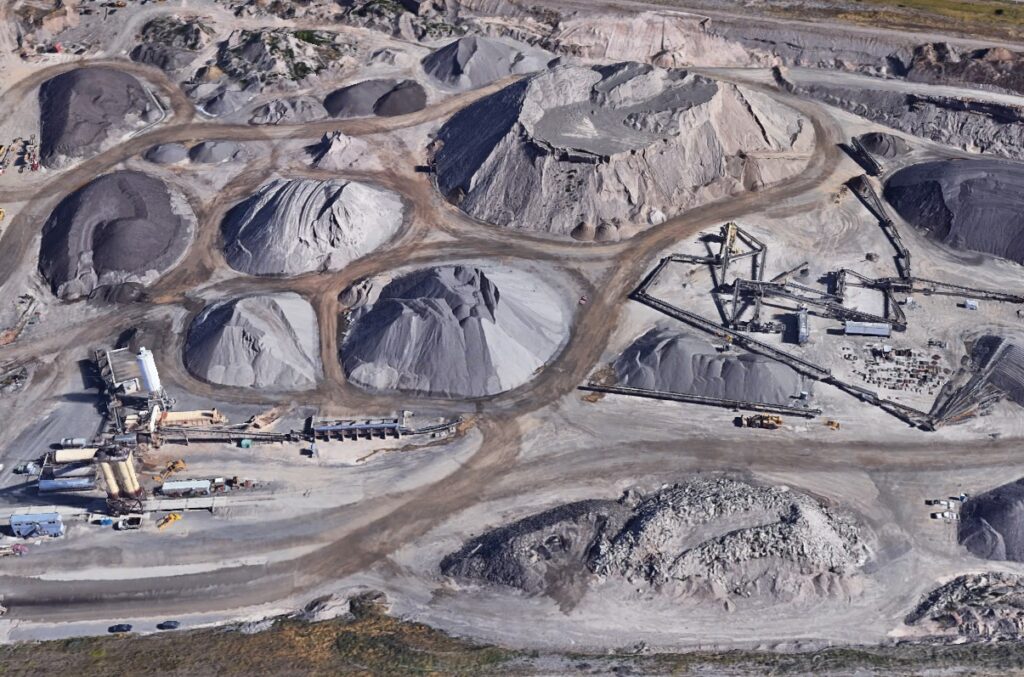 A Google Earth image from a sand and gravel operation in Missoula (Google Earth).

On three separate occasions during a public hearing on Monday, the Montana Department of Environmental Quality reminded nearly three dozen residents that it didn’t pass House Bill 599, which changed open-cut mining rules, it was just trying to follow the law passed by the 2020 Legislature and signed into law by Gov. Greg Gianforte.

Every person who spoke during the nearly two-hour public comment period blasted the department for violating the Montana Constitution and not living up to its mission to protect the environment and the public’s right to participate in the decision-making process.

HB599 radically changed the way the state’s top environmental agency handled open-cut mining operations, often gravel pits and asphalt operations. It reduced the number of people who had to be notified, layered on rules that treated renters differently than those who live in owner-occupied dwellings, and also only requires notice for residents living within a half-mile. The permitting process was split from one to three different entities, which would handle the different portions of the permitting process, while greatly reducing the amount of time the agencies had to review a permit. The law also changed how and who must notify the public, and changed rules about how sites could operate, including allowing the mining operations to operate even throughout the night. The new law also lessened protections for water and wildfire.

Rep. Steve Gunderson, R-Libby, who sponsored the bill, previously told the Daily Montanan that new law was meant to only affect “high-and-dry” operations – those in higher elevations that didn’t come near water and didn’t have residential property nearby. However, DEQ officials point out that the bill’s language said nothing about a carve-out for just “high-and-dry” properties.

As soon as the meeting concluded Monday, the Daily Montanan submitted a list of six questions to the Governor’s Office, inquiring about his support of the legislation. A spokesperson for Gianforte sent the following in response:

“The administration is implementing the law, which is within the legislature’s purview to amend,” said Brooke Stroyke, Gianforte’s press secretary.

A longer list of questions, including the possibility of amending the law next year, was earlier sent to Gunderson, but the Daily Montanan received no response by press time.

As much as residents spoke about their concerns for property protection and the environment, including groundwater contamination, at least half of the conversation focused on how portions of the legislation also thwarted what residents believe are rights protected by the state’s constitution.

They believe HB599 violates Montanans’ rights to a clean environment as well as their right to public participation at the decision-making process.

Many said they were contemplating lawsuits to challenge the laws and protect their property rights, saying that the state has a responsibility to keep itself out of court.

“I feel as if we’re at the forefront of protecting those rights,” said Archie Harper, a Helena Valley resident, who helped put together a citizens coalition to keep a gravel operation out of his neighborhood. “This is an appeal to the Montana Legislature to follow the 1972 Constitution.”

Another residents group, Friends of the Jocko in Arlee, have formed to oppose a new gravel operation there that was permitted using the new provisions of HB599.

Residents from the Arlee area said the new mine operator failed to notify them, even when it should have, and said residents banded together by going house to house to inform the neighborhood about the proposed gravel pit.

“But there’s been no oversight, no recourse and no way to rectify the right of the public to meaningfully participate,” said Jim Coefield, president of the Friends of the Jocko.

Coefield suggested that the DEQ require itself to respond to public comment before issuing a permit, something not required by HB599, state officials have said previously to the Daily Montanan.

Joseph Lamire of Arlee said that despite living right across the street from the proposed gravel operation, he never received a notice.

“You know how I found out about it?” he asked. “It was on the front page of the Missoulian. There were no notices and nothing posted.”

Mandi Taylor, a member of a group opposed to a gravel pit operation in Shepherd, said that the DEQ is now “aiding and abetting” bad operators.

“How are we going to have confidence that due diligence has been done? We need you to protect agriculture and protect our state resources,” Taylor said.

Youpa Stein, who lives in the Jocko Valley, told the DEQ that it should be the department required to send out notices, inform the public and have proof that it was done. She said that has not been the case with the new operation that is moving forward under the new rules.

“When you talked about who gave input on these new rules, I did not hear residents on that list, just those who stand to make money off it,” said Doug Olson. “The citizen stakeholders should have a voice, and you have knee-capped us with no voice on this topic.”

While the DEQ and Gunderson have traded blame back and forth, both have previously acknowledged limitations and challenges. However, many during the testimony on Monday urged the department to go back and rewrite the rules again, using the power it has to curb the law.

“What is left out of this rule is just as important as what is in it,” said Montana Environmental Information Center legislative director Anne Hedges. “The state’s acquiescence in this case is reminiscent of the Copper Kings. That everyone on this call so far has criticized the DEQ’s interpretation of the law should give the department pause.”

She said the DEQ is now bragging about how quickly it’s issuing permits, raising questions by her group as to whether adequate resources have been given to evaluating the proposals.

Because three different segments of Montana government are now responsible for the single decision to allow an open-cut operation, she believes the public never has the proper chance to evaluate the mining proposal.

Kurt Vause, a professional civil engineer, said that new rules that allow for changes in the law to reclamation and changes to permit go against the DEQ’s mission statement.

“This is putting lipstick on a pig,” he said. “And it’s inconsistent with the stated mission on the DEQ website.”

Deb Dumontier, who lives within a half-mile of the proposed Arlee gravel pit, said that the DEQ and the state have not considered what happens when some of the land is tribal land. Her grandmother was one of the original Salish land allotment grants.

Citizens even pushed back during the hearing that if the DEQ was powerless to change the law, then it should be pushing back because of its overall mission.

“This is going to bring a lot of lawsuits and more costs to the taxpayers,” said Mary Stranahan. “It think it should be relayed to the Legislature that you’re going to have a lot of problems.”

Originally published on dailymontanan.com, part of the TownNews Content Exchange.