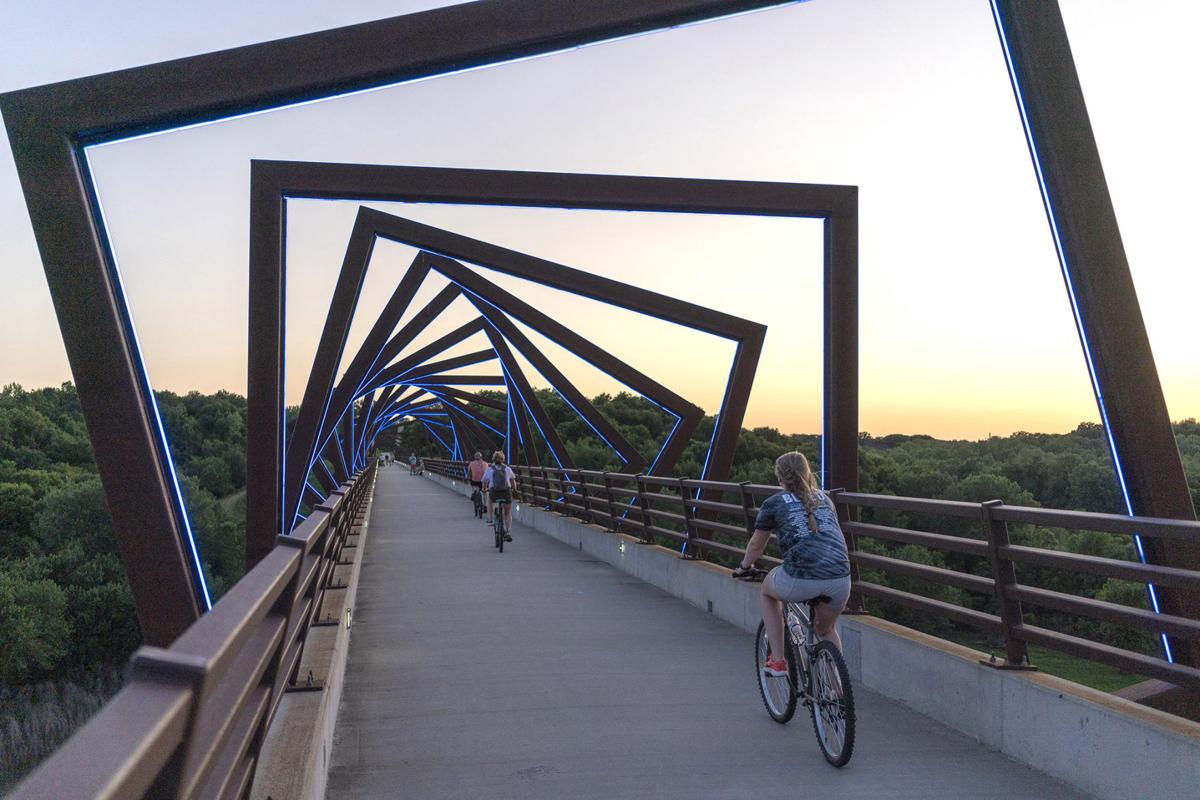 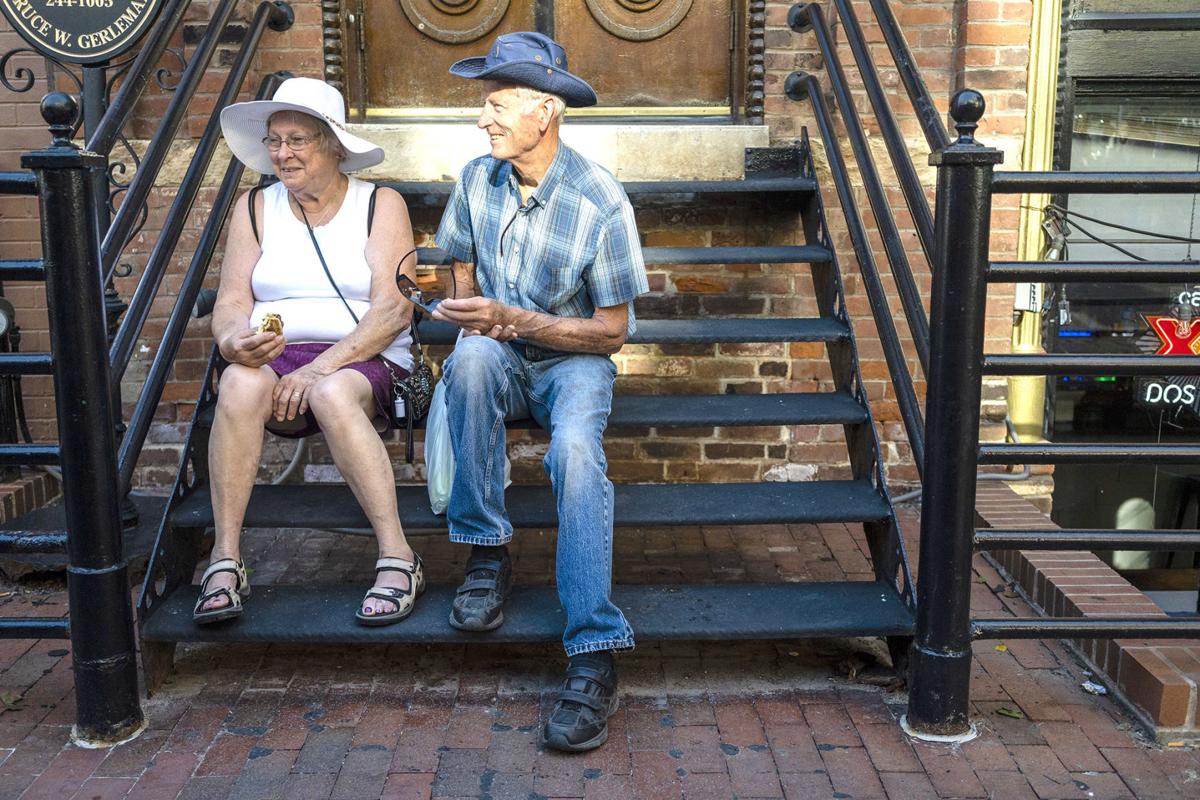 Ron Wheeler of Murray, Iowa, and Margaret Richardson of Moravia, Iowa, sit on a set of stairs during the Downtown Farmers Market in Des Moines, Iowa. 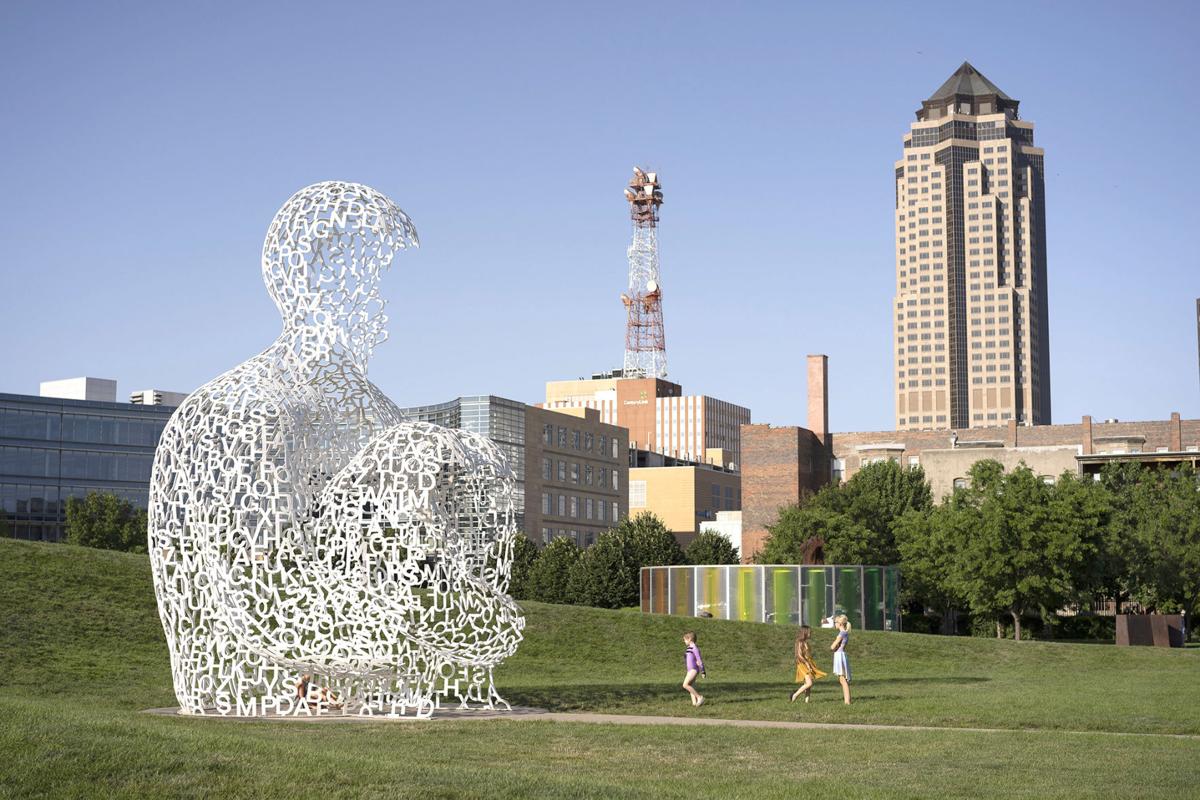 The John and Mary Pappajohn Sculpture Park, part of the Des Moines Art Center, has works by 24 artists. 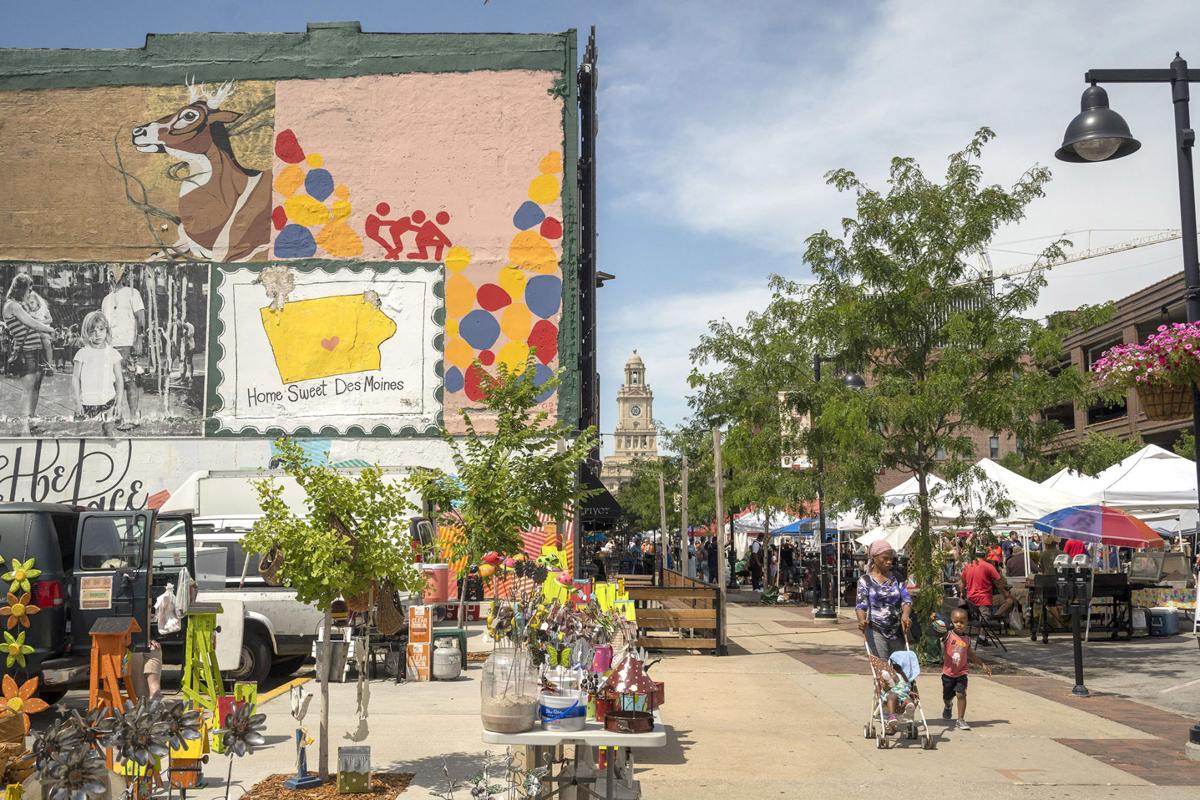 The Downtown Farmers Market in Des Moines, Iowa, attracts up to 40,000 people each weekend through October.

Ron Wheeler of Murray, Iowa, and Margaret Richardson of Moravia, Iowa, sit on a set of stairs during the Downtown Farmers Market in Des Moines, Iowa.

The John and Mary Pappajohn Sculpture Park, part of the Des Moines Art Center, has works by 24 artists.

The Downtown Farmers Market in Des Moines, Iowa, attracts up to 40,000 people each weekend through October.

I didn’t exactly go to Des Moines, Iowa, expecting cornfields, but I didn’t want to miss them, either. One night in the capital city this summer, I drove 30 minutes northeast of Des Moines and joined a weekly bike ride in the rural town of Maxwell. Our small group pedaled along quiet farm roads, past corn and soybean fields and over idyllic rolling hills, just as I had pictured. A small plane buzzed overhead, playfully looping and rolling, and I slowed to see grazing cows and a small cemetery. We finished our ride as the fiery sun set. Only then was I ready for the big city.

Des Moines, or DSM to locals, is a laid-back, easily navigable city with an impressive network of bike trails, one of the most beautiful and interesting capitol buildings I’ve toured and an emerging food and cocktail scene. Locals I met were kind and welcoming, probably more informed about presidential candidates than many of my Washington, D.C., neighbors and proud to host the country’s first caucuses during election season. Next year, the city will unveil the largest skate park in the country (with an 80-foot-long, totally skatable “WOW” sculpture) and host its first Ironman competition. It also plans to create a white-water destination on the river with a surfing simulator for extreme paddlers.

Des Moines is on the move. Go now, while it still enjoys the charms and convenience of a small town. Go before winter hits. Go while there’s still corn.

The colder the winter in a city, the more joyful the summer market-goers. I haven’t substantiated this claim, but in Des Moines, folks are downright gleeful about the Downtown Farmers Market, which attracts 25,000 to 40,000 people each weekend through October with 300 vendors, live music, street performers and a bike valet. The Saturday market, criticized by some for selling too much nonlocal produce and Wisconsin cheeses, still sells plenty of Iowa sweet corn, local jam and hot sauce. But the scene itself is the biggest draw. Go for people-watching, and eat your way through the market (pupusas, juices) or hit a nearby brunch spot.

If you’re fired up for the 2020 Olympic Games but don’t have the coin for Tokyo, preview the competition at the Drake Relays. Track and field is to Iowa what college football is to the South, and nowhere are the contests more exciting than around the blue oval at Drake Stadium.

Driving into town with the majestic five-domed Iowa State Capitol on the horizon, I thought I was approaching a kingdom. Come to find out, this kingdom is magical, with free parking and free temporary tattoos. On a tour, I learned that the ornate building was completed in 1886, constructed over 15 years by day laborers. It originally housed all three branches of government and was built without electricity — which was thought to be a fad. The gold leaf on the dome, the guide told us, is as thin as ash. The highlight was a marble-walled, five-level law library with white wrought iron railings, spiral staircases and a spectacular view of downtown. It houses more than 100,000 books, including titles on the state’s railroad, prairie plants and baseball. When the secretary of state is in town, he invites visitors into his office to see his model car collection and the Iowa constitution.

The avocado toast craze has hit Des Moines, and judging from the orders at St. Kilda, locals are all in. The small, two-year-old cafe offers breakfast, lunch, coffee and cocktails with full table service. It looks a little Brooklyn, with its industrial vibe, and tastes a little Aussie, with fresh, colorful and creatively blended ingredients. The avo toast rocks charred corn and tomato salsa, the salmon and eggs come with roasted zucchini, and the stone fruit and fresh burrata salad is as good as summer gets.

I loved Hello, Marjorie even before I learned it was named after one of the owner’s grandmothers, who drank sloe gin by the glass and smoked cigarettes by the pack. My own 99-year-old Grandma Marjorie enjoys her cocktails and would feel right at home amid the bar’s mid-century mod furniture. Located in the former Des Moines Register building and designed to look like your great aunt’s house (gold velvet curtains, brass clock collection), Hello, Marjorie is the city’s go-to cocktail bar. Liquor is stored in mirrored cabinets, and the 10-item cocktail menu includes the Editor’s Note, a riff on an Old-Fashioned, and the Dinner Party, a tequila drink with mascarpone cream cheese. Tuesdays, old fashioneds, martinis and Manhattans are $6. Get a selfie by the giant neon Jack Kerouac quote, “The prettiest girls in the world live in Des Moines.” For other themed watering holes, try El Bait Shop, with hundreds of craft beers on tap; Iowa Tap Room, which specializes in Iowa beers; and High Life Lounge, a doppelganger of your ‘60s rec room, where patrons inexplicably enjoy Spam and egg sandwiches with Miller High Life and Schlitz.

“Locals’ palates are getting more adventurous,” said Joe Tripp, co-owner and chef at Harbinger, and that’s good news for the rest of us. The popular Ingersoll neighborhood dinner and brunch spot is the anti-meat-and-potatoes restaurant, focusing on Southeast Asian flavors and vegetable-based small plates like steamed buns (also available with pork or chicken), locally grown shiitake mushroom tempura, buckwheat, kale and popped groats tarts and Hakurei turnips with local chevre. Tripp, a four-time James Beard Award nominee who ran the kitchen at Alba, shops at the Downtown Farmers Market and preserves massive amounts of produce so winter diners can enjoy treats like fermented ramps and strawberry relish. Nearby: Cheese Bar, dive bar Greenwood Lounge and Eatery A, the city’s best happy hour if you dig pizza and wine.

If you love greasy spoon diners, politics and servers who call you “Sweetie,” Waveland Cafe will make your ticker tick just a little faster.

Men who hate shopping, Fontenelle Supply Co. may turn you. Built by guys who blog about camping and motorcycle trips and made for guys who appreciate well-made (read: pricey) items that they’ll never KonMari out of their lives, the shop opened three years ago with an in-house custom leather shop. The owners craft leather wallets and totes with a lifetime guarantee and make their own candles (in Marlboro Man scents like whiskey and leather, timber and coffee). You can also find Japanese selvage denim, Filson shirts and jackets, work boots that look like they’ll last a generation, safety glasses for hazardous manly activities, restored and hand-sharpened vintage axes and motorcycle helmets. For more moto and vintage, visit Dream Company on Ingersoll.

Valley Junction in West Des Moines has been down on its luck in recent years, but the buzz and lure of new retailers and restaurants is making this eight-block shopping strip DSM’s Comeback Kid. Once known for its dozens of antique and vintage shops, the compact neighborhood (about five miles west of downtown) still has some old-school survivors, like Atomic Garage (polyester pants, disco dresses and go-go boots) and sister shop A OK Antiques (jukebox, mid-century furniture). And there’s new blood. In June, designer John Bosley, formerly with Raygun, opened Bozz Prints (posters, shirts, mugs); home and gift shop

If you can’t find a fun gift here, you might need new friends.

Popularized by HGTV’s “West End Salvage” reality show, West End Architectural Salvage is a treasure-hunter’s paradise, with inventory from across the nation and four floors of fabulous finds. On the ground floor, grab coffee (or a Bloody Mary, if it’s that kind of morning). Strolling around the century-old building, you’ll find an old amusement park car and carousel animal, a barrel of old yardsticks, vintage metal lockers, Underwood and Smith Corona typewriters, stained glass, a metal cowboy bathtub, old motel signs, a bench from the Des Moines airport, tin ceiling tiles and doors, license plates, a bench made from the back door of a flatbed truck and window grates from an Iowa jail. You’ll also find beautiful tables made from reclaimed barn lumber. At the nearby Art Terrarium, sidle up to the potting bar to make your own succulent garden.

Going first class was never so affordable. Des Lux Hotel, a downtown boutique property in a century-old building a block from the sculpture park, is a local favorite because of the martinis and a guest favorite because, well, who doesn’t like a little class? Along with a grand piano and a wall of mismatched mirrors, the common area features a gorgeous lounge with blue velvet bar chairs and a repurposed stained glass communal table. In the lobby bathrooms, you’ll find gold swan faucet handles and gold peacock wallpaper. Amenities include a sauna, steam room and hot tub, a 3,000-square foot gym and 51 uniquely decorated rooms. Complementary made-to-order breakfast and a free airport/East Village shuttle are also available. All this, starting at $189. Guests often dine nearby at some of the city’s most upscale restaurants, including 801 Chophouse, one of Iowa’s top steak houses, and Proof, considered the foodiest restaurant in town.

Revel Hotel opened this summer in Urbandale, about 15 minutes west of downtown and within walking distance of the 500-acre Living History Farms, an interactive outdoor museum focusing on Midwestern rural life experiences. The 112-room hotel, part of Hilton’s Tapestry Collection, plays up the farm theme with tasteful modern farm murals, large black-and-white cowboy photos and lobby pillows with pig and horse faces. Revel’s restaurant has a pool table and a full bar with local beers on tap. Its gym should satisfy iron-pumpers, rowers and yogis alike. Rooms start at $174. Next door is its sister property, Hotel Renovo, a little family and budget-friendlier, with a pool, weekly live music and a small lobby bar.

Bike, run, walk or skip across the High Trestle Trail Bridge, about 30 minutes north of downtown. At 13 stories above the Des Moines River, the half-mile, award-winning bridge is one of the tallest trail bridges in the world. But the main attraction is the display of 41 artistic steel frames rising over the path, lit a brilliant blue starting at sunset. The 25-mile trail runs through five towns; rent bikes at Pingora Outdoors, 50 feet off the trail in Ankeny, or Trailside Rentals in Madrid (pronounced MADrid), a block from the trail and a few miles from the bridge. Also in Madrid, hit the Filling Station for shakes and malts and Flat Tire Lounge in a Quonset hut for beer; Firetrucker Brewery is a cyclist-friendly spot in Ankeny. Iowa’s bike trail system is robust, and social cycling is legendary here, thanks in part to RAGBRAI, the week-long summer ride across the state. Join the masses on a smaller scale, pedaling eight miles south of Des Moines on the Great Western Trail to Cumming Tap for Taco Tuesday.