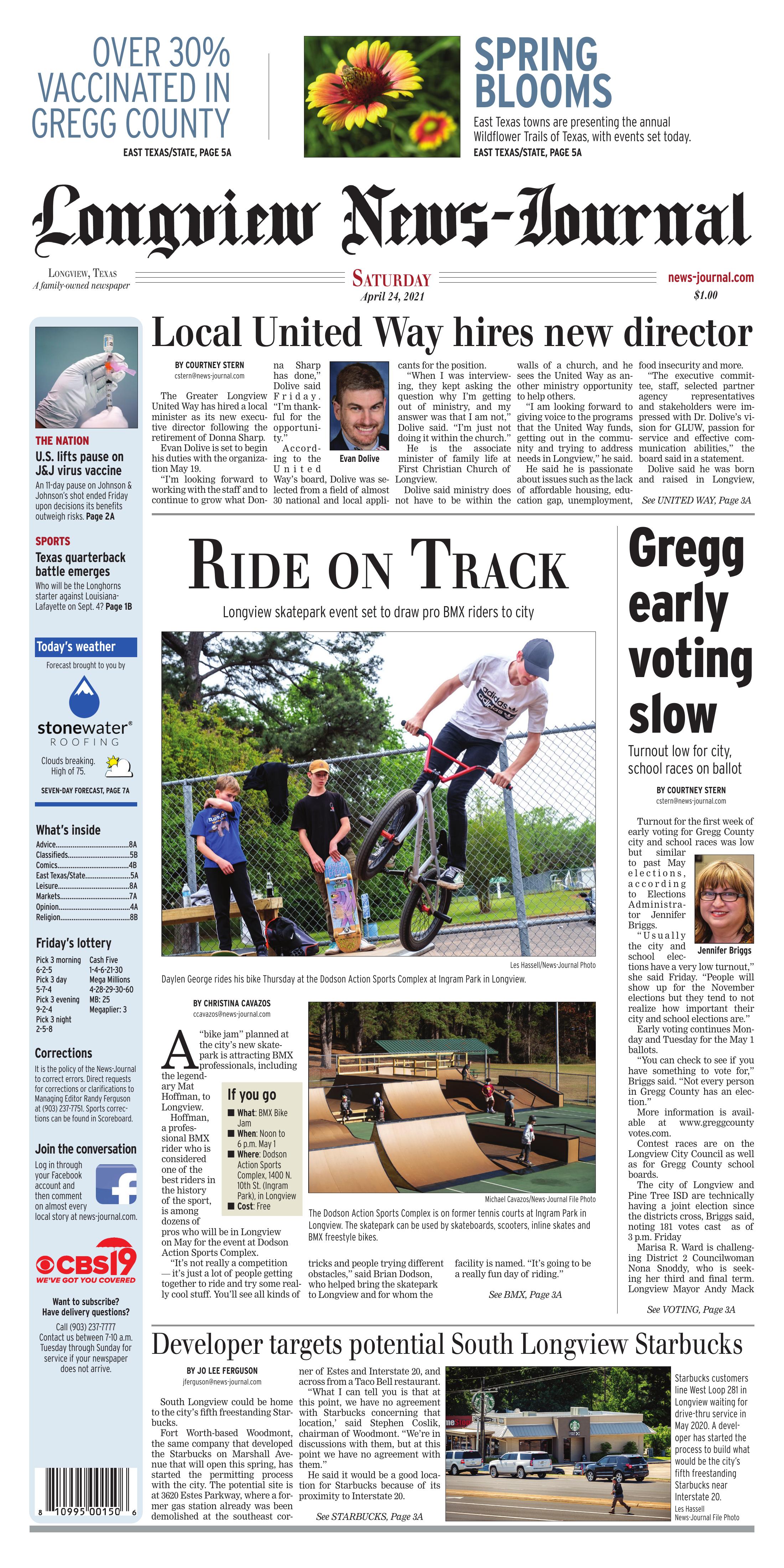 The Greater Longview United Way has hired a local minister as its new executive director following the retirement of Donna Sharp.

Evan Dolive is set to begin his duties with the organization May 19.

“I’m looking forward to working with the staff and to continue to grow what Donna Sharp has done,” Dolive said Friday. “I’m thankful for the opportunity.”

According to the United Way’s board, Dolive was selected from a field of almost 30 national and local applicants for the position.

“When I was interviewing, they kept asking the question why I’m getting out of ministry, and my answer was that I am not,” Dolive said. “I’m just not doing it within the church.”

He is the associate minister of family life at First Christian Church of Longview.

Dolive said ministry does not have to be within the walls of a church, and he sees the United Way as another ministry opportunity to help others.

“I am looking forward to giving voice to the programs that the United Way funds, getting out in the community and trying to address needs in Longview,” he said.

He said he is passionate about issues such as the lack of affordable housing, education gap, unemployment, food insecurity and more.

“The executive committee, staff, selected partner agency representatives and stakeholders were impressed with Dr. Dolive’s vision for GLUW, passion for service and effective communication abilities,” the board said in a statement.

Dolive said he was born and raised in Longview, attended Tatum High School and later went to Stephen F. State Austin University. He is just finishing his doctor of ministry at Texas Christian University.

“I’ve been back in Longview for the past six years,” he said, with his wife and children. “We’re really invested in East Texas.”

The United Way just wrapped up its 2020-21 fundraising campaign and is preparing for the next fundraising effort. The organization announced Thursday during a drive-thru celebration that the campaign raised more than $1.042 million, surpassing its goal.

“She so values GLUW and our community that she has agreed to support Dr. Dolive during this transition period,” the board said in its statement. “Although we will miss her, Donna has more than earned the right to spend more time with loved ones. Please join us as we extend our warmest wishes for her future.”

The Dodson Action Sports Complex is on former tennis courts at Ingram Park in Longview. The skatepark can be used by skateboards, scooters, inline skates and BMX freestyle bikes.

A “bike jam” planned at the city’s new skatepark is attracting BMX professionals, including the legendary Mat Hoffman, to Longview.

Hoffman, a professional BMX rider who is considered one of the best riders in the history of the sport, is among dozens of pros who will be in Longview on May for the event at Dodson Action Sports Complex.

“It’s not really a competition — it’s just a lot of people getting together to ride and try some really cool stuff. You’ll see all kinds of tricks and people trying different obstacles,” said Brian Dodson, who helped bring the skatepark to Longview and for whom the facility is named. “It’s going to be a really fun day of riding.”

The Legends League BMX Jam is set noon to 6 p.m. May 1 at the complex, which is at Longview’s Ingram Park. The event is open to anyone who rides, though Dodson said the event is mainly geared for professional riders to come showcase their talents. He said riders are coming from across Texas and from surrounding states.

“There’s going to be some pretty serious riding going on,” Dodson said. “There will be stuff that people in this area have never seen before. We have guys coming who have participated in the X Games.”

Pro riders Morgan Wade, who lives in Tyler and who helped design Longview’s skatepark, and Cory Berglar, from New Jersey, will compete against each other in what Dodson said will be an “epic” Game of Bike. The Game of Bike will be the highlight of the Legends League BMX Jam and is planned to start shortly after the jam opens, Dodson said.

“These guys are legends in the BMX community, and they’ve created some beef with each other on social media that’s leading up to this ride. It’s all in good fun, but it’s really amped up the BMX world on social media,” Dodson said. “They’ll battle each other, per se, at the jam and we have people coming from all over the country to see this.”

The Game of Bike is similar to what many people may know as the Game of Horse in basketball. “Horse” is a freestyle basketball game in which players take turns shooting hoops from different locations; if someone makes a shot but everyone else misses, those people get a letter toward spelling out the word horse. Once a person spells horse, he or she is out of the match; the last player standing wins.

The Game of Bike operates very similarly, Dodson explained. In that event, Wade and Berglar will take turns riding each against each other, performing tricks. They’ll try the same tricks, and if one of them doesn’t land a trick, he will get a letter toward spelling “bike.” Whoever spells bike first is out, and the other is declared the winner of the bragging rights.

Meanwhile those who attend will also have the chance to see Hoffman, a household name for any BMX fan. Dodson described Hoffman as being “the Tony Hawk of BMX,” and said BMX riders from all generations know his name. Hoffman will serve as the judge of the jam and be there to meet the community.

As dozens of people travel from across the country to Longview, they’re booking hotels and will be eating and shopping in town during the weekend, contributing to the city’s economy.

From an initial fundraiser in June 2018, it took about 15 months to raise the approximately $80,000 to build Dodson Action Sports Complex. Dodson raised $40,000 toward the skatepark and the city contributed a matching $40,000. The skatepark opened to the public in December.

While Dodson said he knew the skatepark could possibly draw professionals to Longview, this event has come about much quicker than he anticipated.

“To see it come to life and to see it happening right now is really, really cool,” he said. “There are at least 10 parks in the DFW area that each cost $1 million to build. These guys could be riding at those parks, but they would rather come to Longview, Texas, because of the way our park is built. I hope we give people a reason to come here and a reason to remember us. It’s going to be so cool to see so many people come to our little town.”

Starbucks customers line West Loop 281 in Longview waiting for drive-thru service in May 2020. A developer has started the process to build what would be the city’s fifth freestanding Starbucks near Interstate 20.

A developer is targeting a possible Starbucks at 3620 Estes Parkway, where a former gas station already was been demolished at the southeast corner of Estes and Interstate 20, and across from a Taco Bell restaurant.

South Longview could be home to the city’s fifth freestanding Starbucks.

Fort Worth-based Woodmont, the same company that developed the Starbucks on Marshall Avenue that will open this spring, has started the permitting process with the city. The potential site is at 3620 Estes Parkway, where a former gas station already was been demolished at the southeast corner of Estes and Interstate 20, and across from a Taco Bell restaurant.

He said it would be a good location for Starbucks because of its proximity to Interstate 20.

“A lot of people are south of Estes. Estes acts as a courier of traffic,” for the population south of the interstate, Coslik said.

“I think that’s awesome. We always get to the finish line, but we’re just not able to to capture it,” she said. “This would be amazing for that to occur.”

A national brand such as Starbucks would enhance efforts to revitalize South Longview and that corridor. It will be a catalyst for other businesses, too, she said.

“Starbucks would be a welcome business to South Longview. We have a lot of coffee drinkers,” Snoddy said, laughing.

District 3 Councilman Wray Wade, who represents the area where the Starbucks might locate, wasn’t immediately available for comment Friday.

Longview has freestanding Starbucks locations on West Loop 281 and on North Eastman Road. Another location is in the planning stages for Gilmer Road at Toler Road.

Starbucks also has a store inside Target, also on North Eastman Road.

Turnout for the first week of early voting for Gregg County city and school races was low but similar to past May elections, according to Elections Administrator Jennifer Briggs.

Early voting continues Monday and Tuesday for the May 1 ballots.

“You can check to see if you have something to vote for,” Briggs said. “Not every person in Gregg County has an election.”

More information is available at www.greggcountyvotes.com.

Contest races are on the Longview City Council as well as for Gregg County school boards.

The city of Longview and Pine Tree ISD are technically having a joint election since the districts cross, Briggs said, noting 181 votes cast as of 3 p.m. Friday

Temple “Tem” Carpenter III and Jeremiah Hunter are vying for the District 1 council seat after Councilman Ed Moore chose not to run for reelection. Former District 1 Councilman John Sims previously filed to run but has since withdrawn, although his name remains on the ballot.

In Kilgore, Mayor Ronnie Spradlin has filed for reelection and will run unopposed. Place 2 Councilman Harvey McClendon, who also is the city’s mayor pro tem, will be running against Brandon Bigos.

The Kilgore voting location had 80 votes cast as of Friday afternoon, Briggs said.

Briggs said 133 votes had been cast for a Longview board race as of Friday afternoon.

Tiffany Angus and Dr. Samir Germanwala are running to seek the Longview ISD Place 3 seat that was vacated after Chris Mack’s resignation in November. Trustees Michael Tubb and Troy Simmons also are up for reelection and are running unopposed.

In Pine Tree ISD, Drew Seidel and Rob Woods have filed to run for the open Place 2 spot, which was vacated by Kerri Daugbjerg.

Two women seeking election in May to the Longview City Council are focused on making improvements to the city’s southwest district.

Accountability is one of the key issues cited by two candidates on the May ballot for Longview’s District 1 City Council seat.

Early voting for May 1 city and school elections begins Monday and continues through April 27.