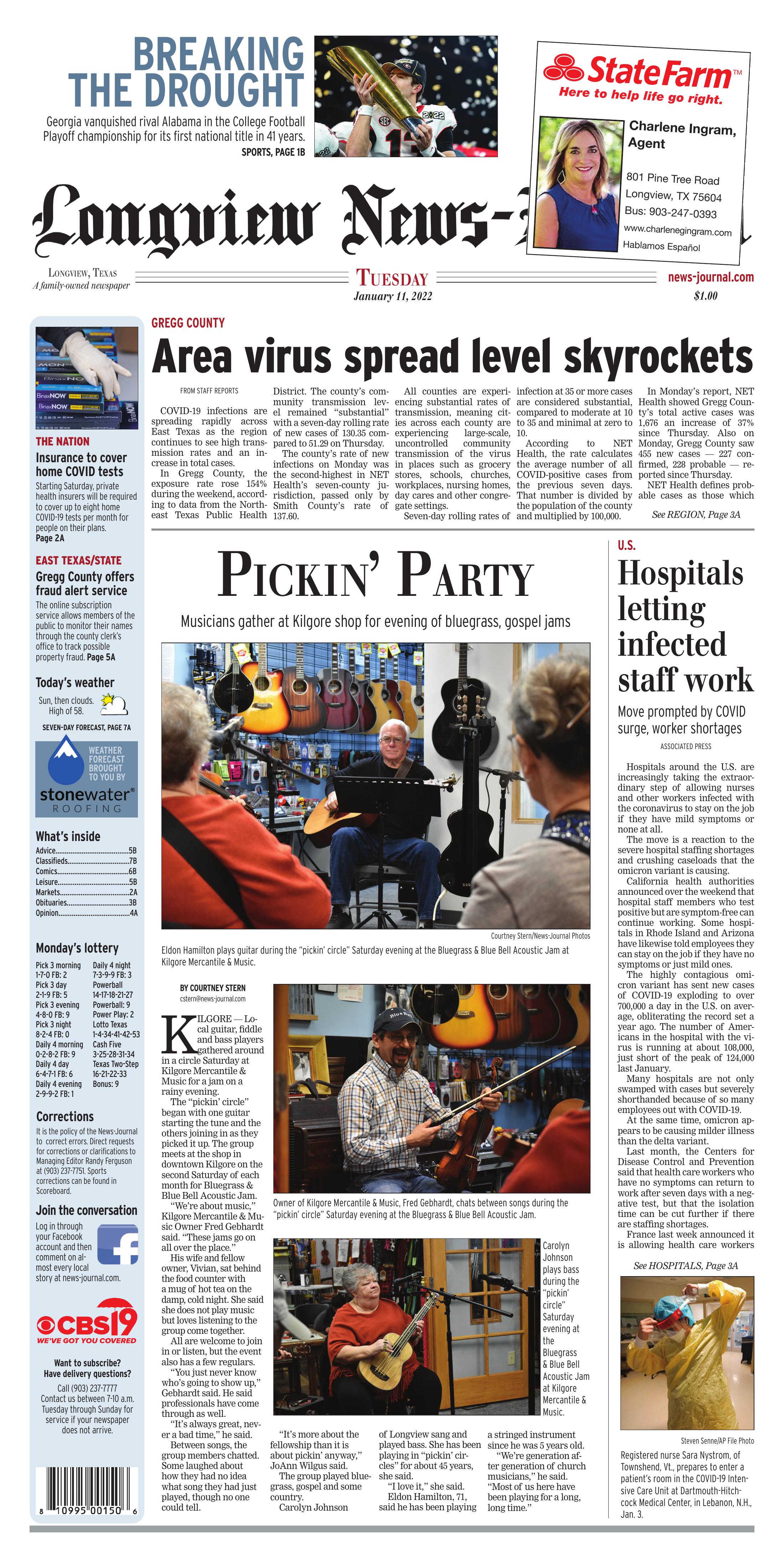 Cars move in a line as people wait to get a drive-thru COVID-19 test at Christus Good Shepherd’s NorthPark facility in Longview.

COVID-19 infections are spreading rapidly across East Texas as the region continues to see high transmission rates and an increase in total cases.

In Gregg County, the exposure rate rose 154% during the weekend, according to data from the Northeast Texas Public Health District. The county’s community transmission level remained “substantial” with a seven-day rolling rate of new cases of 130.35 compared to 51.29 on Thursday.

The county’s rate of new infections on Monday was the second-highest in NET Health’s seven-county jurisdiction, passed only by Smith County’s rate of 137.60.

All counties are experiencing substantial rates of transmission, meaning cities across each county are experiencing large-scale, uncontrolled community transmission of the virus in places such as grocery stores, schools, churches, workplaces, nursing homes, day cares and other congregate settings.

Seven-day rolling rates of infection at 35 or more cases are considered substantial, compared to moderate at 10 to 35 and minimal at zero to 10.

According to NET Health, the rate calculates the average number of all COVID-positive cases from the previous seven days. That number is divided by the population of the county and multiplied by 100,000. 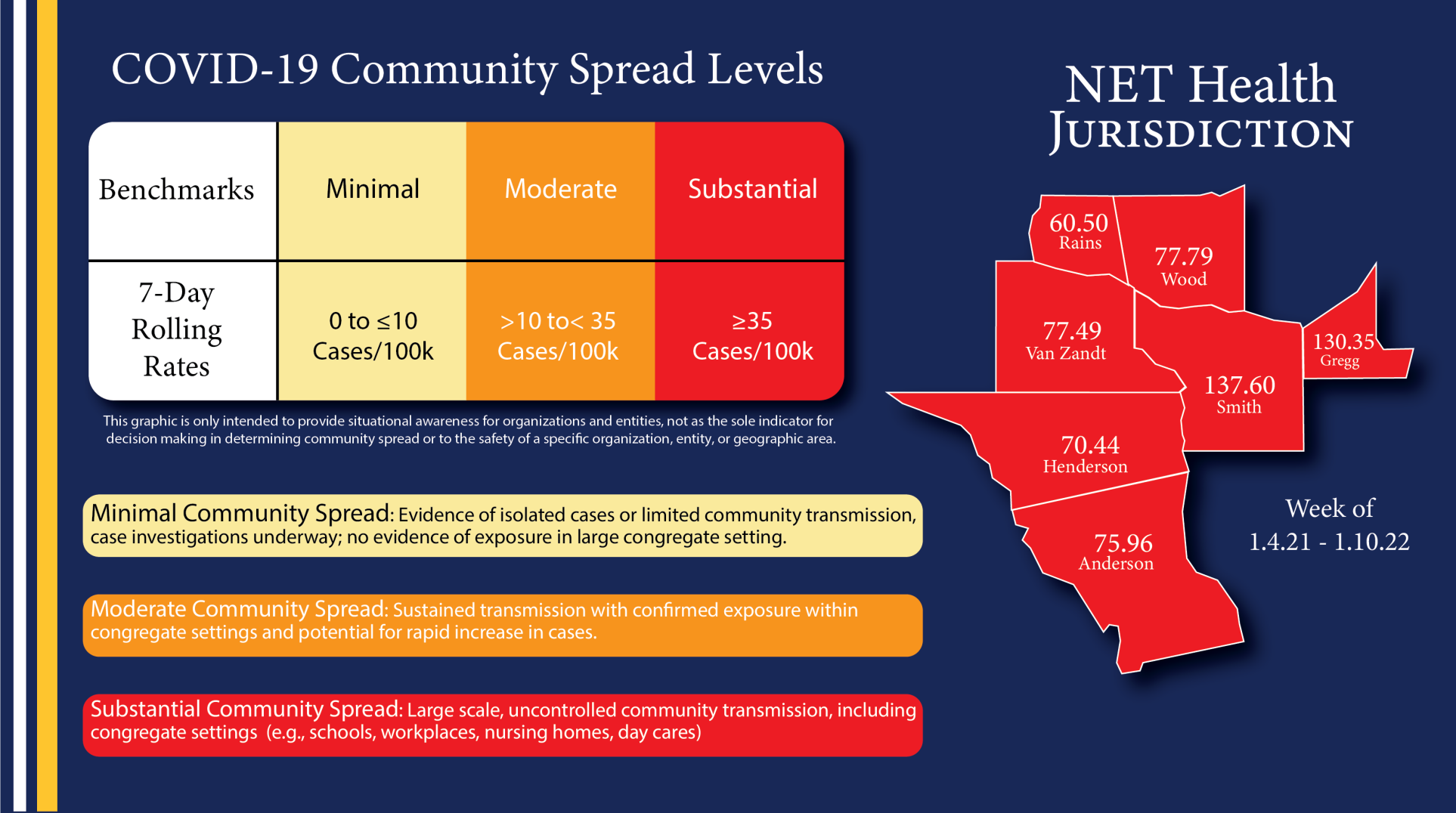 NET Health defines probable cases as those which are attributed to patients who have received positive antigen tests, until the individual has been administered a Polymerase Chain Reaction (PCR) test. If a person’s PCR laboratory result is positive, that becomes a confirmed case.

In Longview on Monday, the line for drive-thru COVID-19 testing at Christus Good Shepherd’s NorthPark facility stretched onto Hawkins Parkway. Gregg County Health Authority Dr. Lewis Browne this past week said half of the people who have presented in the county for testing and receiving a positive result. 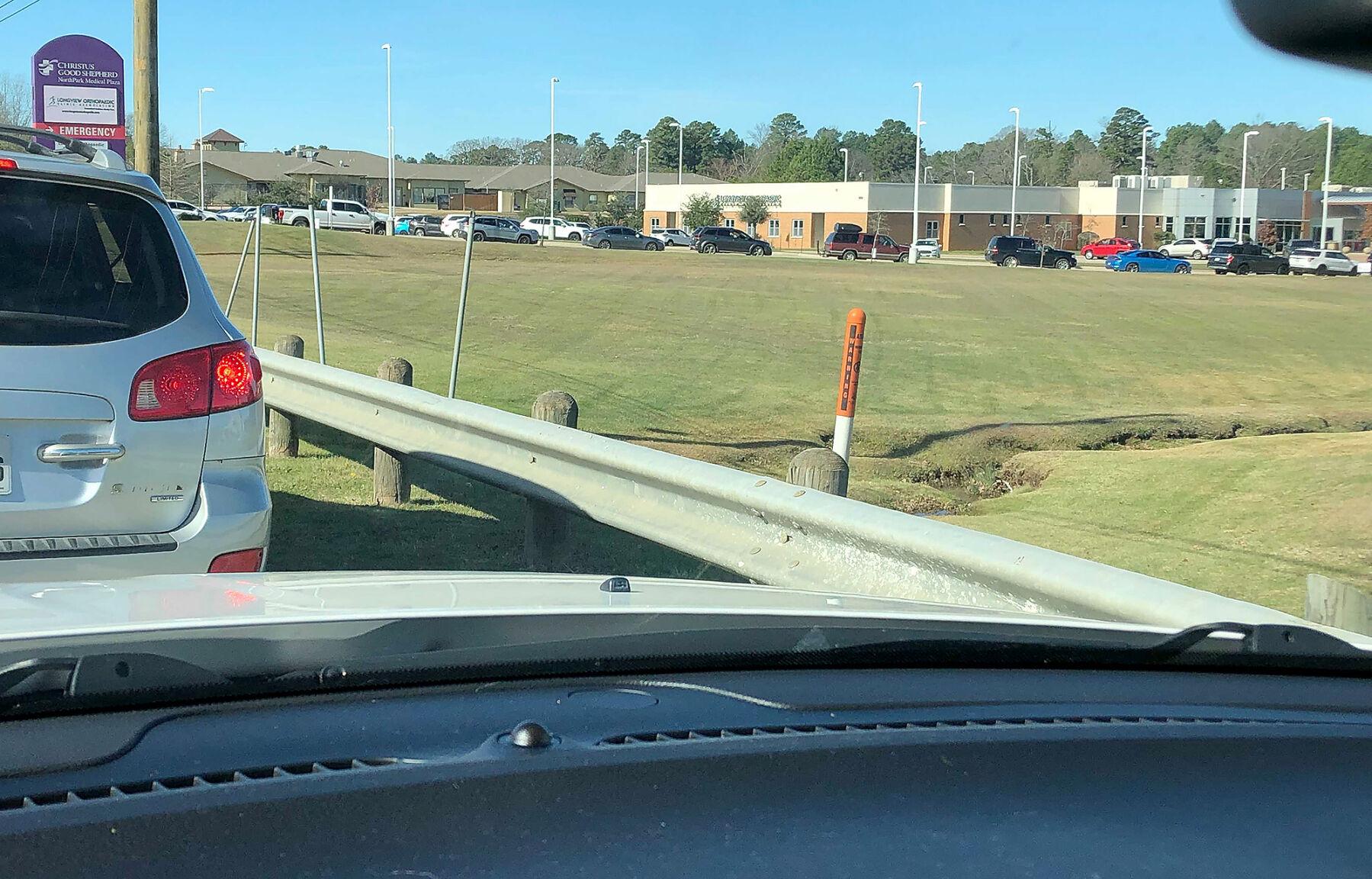 A line of cars on Monday stretches to Hawkins Parkway in Longview as people wait to get a drive-thru COVID-19 test at Christus Good Shepherd's NorthPark facility in Longview.

He also said the demand for COVID-19 tests has been stressing local emergency rooms.

NET Health on Monday reported no active cases of COVID-19 in the Gregg County Jail. In Smith County, 41 jail inmates had an active diagnosis of COVID-19. The Smith County Jail last week announced it suspended visitation due to the recent uptick in cases.

There have been 21,264 total COVID-19 cases in Gregg County since the pandemic began and 19,303 total recoveries, according to NET Health.

Smith County has seen 986 new cases — 405 confirmed and 581 probable — reported since Thursday. There were 3,846 active cases in the county.

Henderson County had 199 new cases — 132 confirmed, 67 probable — reported since Thursday. There were 707 total active cases within the county.

Van Zandt County had 174 new cases — 87 confirmed, 87 probable — reported since Thursday. There were 550 total active cases within the county.

Anderson County had 156 new cases — 33 confirmed, 123 probable — reported since Thursday. There were 521 total active cases within the county.

Wood County had 155 new cases — 80 confirmed, 75 probable — reported since Thursday. There were 417 total active cases within the county.

Rains County had 33 new cases — 15 confirmed, 18 probable — reported since Thursday and there wer 81 total active cases within the county.

Local guitar, fiddle and bass players gathered around in a circle Saturday at Kilgore Mercantile & Music for a jam on a rainy evening.

Local guitar, fiddle and bass players gathered around in a circle Saturday at Kilgore Mercantile & Music for a jam on a rainy evening.

KILGORE — Local guitar, fiddle and bass players gathered around in a circle Saturday at Kilgore Mercantile & Music for a jam on a rainy evening.

The “pickin’ circle” began with one guitar starting the tune and the others joining in as they picked it up. The group meets at the shop in downtown Kilgore on the second Saturday of each month for Bluegrass & Blue Bell Acoustic Jam.

“We’re about music,” Kilgore Mercantile & Music Owner Fred Gebhardt said. “These jams go on all over the place.”

His wife and fellow owner, Vivian, sat behind the food counter with a mug of hot tea on the damp, cold night. She said she does not play music but loves listening to the group come together.

All are welcome to join in or listen, but the event also has a few regulars.

“You just never know who’s going to show up,” Gebhardt said. He said professionals have come through as well.

Between songs, the group members chatted. Some laughed about how they had no idea what song they had just played, though no one could tell.

“It’s more about the fellowship than it is about pickin’ anyway,” JoAnn Wilgus said.

The group played bluegrass, gospel and some country.

Carolyn Johnson of Longview sang and played bass. She has been playing in “pickin’ circles” for about 45 years, she said.

Eldon Hamilton, 71, said he has been playing a stringed instrument since he was 5 years old.

“We’re generation after generation of church musicians,” he said. “Most of us here have been playing for a long, long time.”

Registered nurse Sara Nystrom, of Townshend, Vt., prepares to enter a patient’s room in the COVID-19 Intensive Care Unit at Dartmouth-Hitchcock Medical Center, in Lebanon, N.H., Jan. 3. The omicron variant has caused a surge of new cases of COVID-19 in the U.S. and many hospitals are not only swamped with cases but severely shorthanded because of so many employees out with COVID-19.

Hospitals around the U.S. are increasingly taking the extraordinary step of allowing nurses and other workers infected with the coronavirus to stay on the job if they have mild symptoms or none at all.

The move is a reaction to the severe hospital staffing shortages and crushing caseloads that the omicron variant is causing.

California health authorities announced over the weekend that hospital staff members who test positive but are symptom-free can continue working. Some hospitals in Rhode Island and Arizona have likewise told employees they can stay on the job if they have no symptoms or just mild ones.

The highly contagious omicron variant has sent new cases of COVID-19 exploding to over 700,000 a day in the U.S. on average, obliterating the record set a year ago. The number of Americans in the hospital with the virus is running at about 108,000, just short of the peak of 124,000 last January.

Many hospitals are not only swamped with cases but severely shorthanded because of so many employees out with COVID-19.

At the same time, omicron appears to be causing milder illness than the delta variant.

Last month, the Centers for Disease Control and Prevention said that health care workers who have no symptoms can return to work after seven days with a negative test, but that the isolation time can be cut further if there are staffing shortages.

France last week announced it is allowing health care workers with mild or no symptoms to keep treating patients rather than isolate.

In the Phoenix area, Dignity Health, a major hospital operator, sent a memo to staff members saying those infected with the virus who feel well enough to work may request clearance from their managers to go back to caring for patients.

“We are doing everything we can to ensure our employees can safely return to work while protecting our patients and staff from the transmissibility of COVID-19,” Dignity Health said in a statement.

In California, the Department of Public Health said the new policy was prompted by “critical staffing shortages.” It asked hospitals to make every attempt to fill openings by bringing in employees from outside staffing agencies.

Also, infected workers will be required to wear extra-protective N95 masks and should be assigned to treat other COVID-19-positive patients, the department said.

“We did not ask for this guidance, and we don’t have any information on whether hospitals will adopt this approach or not,” said Jan Emerson-Shea, a spokesperson for the California Hospital Association. “But what we do know is that hospitals are expecting many more patients in the coming days than they’re going to be able to care for with the current resources.”

Emerson-Shea said many hospital workers have been exposed to the virus, and are either sick or caring for family members who are.

The 100,000-member California Nurses Association came out against the decision and warned it will lead to more infections.

Gov. Gavin Newsom and other state health leaders “are putting the needs of health care corporations before the safety of patients and workers,” Cathy Kennedy, the association’s president, said in a statement. “We want to care for our patients and see them get better — not potentially infect them.”

Earlier this month in Rhode Island, a state psychiatric hospital and a rehabilitation center allowed staff who tested positive for COVID-19 but were asymptomatic to work.

At Miami’s Jackson Memorial Hospital, chief medical officer Dr. Hany Atallah said they are not yet at the breaking point and that workers who test positive are staying away for five days. “We still have to be very careful to prevent spread in the hospital,” he said.

Kevin Cho Tipton, a nurse at Jackson Memorial, said he understands why hospitals are eager to have employees come back after five days of isolation. Yet he worries about the potential risk, especially for patients at higher risk of infection, such as those receiving transplants.

“Yes, Omicron is less deadly, but we still don’t know much,” he said.

Click and hold your mouse button on the page to select the area you wish to save or print. You can click and drag the clipping box to move it or click and drag in the bottom right corner to resize it. When you're happy with your selection, click the checkmark icon next to the clipping area to continue.