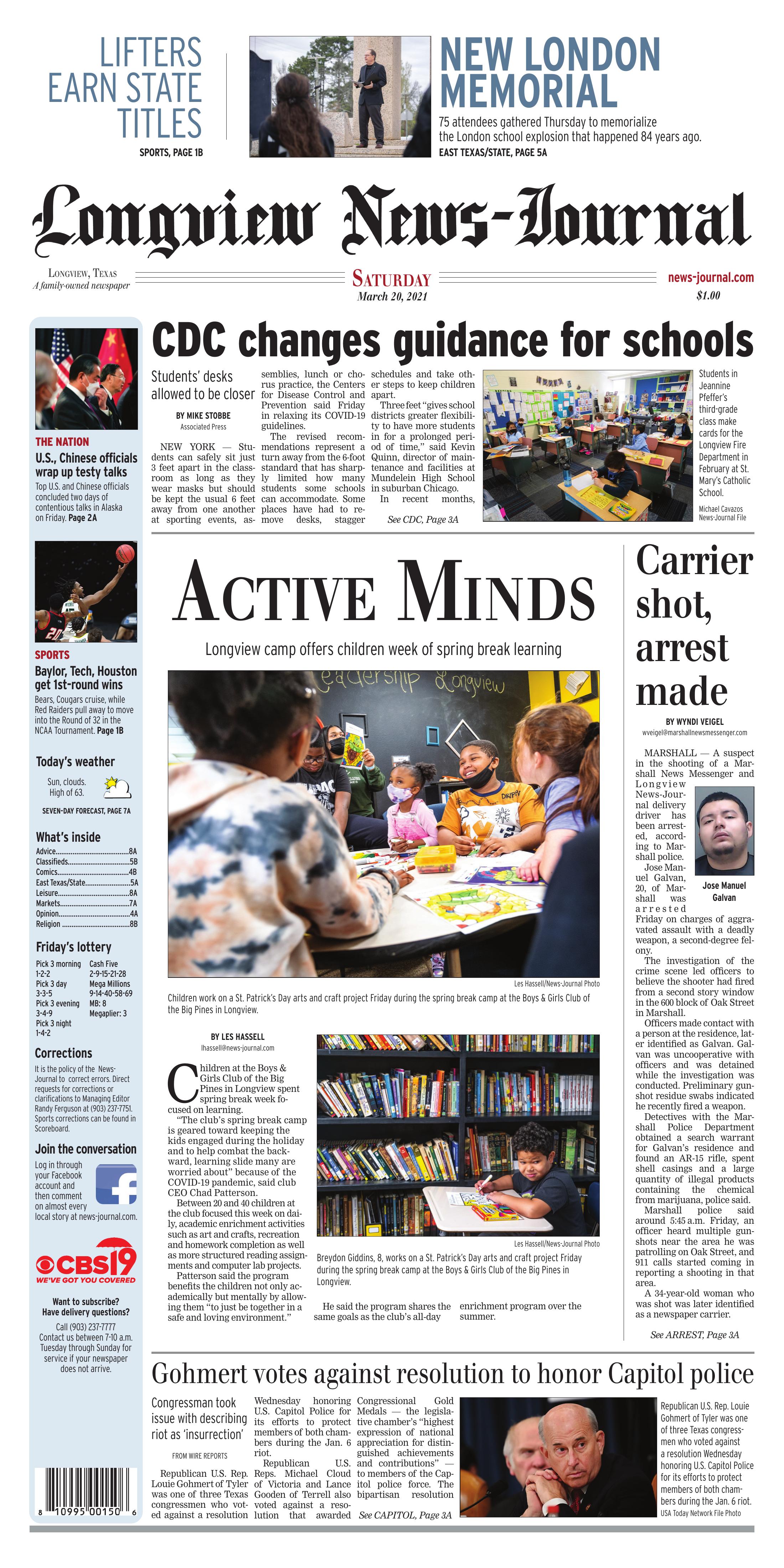 Children work on a St. Patrick’s Day arts and craft project Friday during the spring break camp at the Boys & Girls Club of the Big Pines in Longview.

Breydon Giddins, 8, works on a St. Patrick’s Day arts and craft project Friday during the spring break camp at the Boys & Girls Club of the Big Pines in Longview.

Children at the Boys & Girls Club of the Big Pines in Longview spent spring break week focused on learning.

“The club’s spring break camp is geared toward keeping the kids engaged during the holiday and to help combat the backward, learning slide many are worried about” because of the COVID-19 pandemic, said club CEO Chad Patterson.

Between 20 and 40 children at the club focused this week on daily, academic enrichment activities such as art and crafts, recreation and homework completion as well as more structured reading assignments and computer lab projects.

Patterson said the program benefits the children not only academically but mentally by allowing them “to just be together in a safe and loving environment.”

He said the program shares the same goals as the club’s all-day enrichment program over the summer.

Republican U.S. Reps. Michael Cloud of Victoria and Lance Gooden of Terrell also voted against a resolution that awarded Congressional Gold Medals — the legislative chamber’s “highest expression of national appreciation for distinguished achievements and contributions” — to members of the Capitol police force. The bipartisan resolution passed 413-12.

Politico reported that allies in Congress of former President Donald Trump tried “to scrub references to the insurrection” from the resolution.

Before the vote, Gohmert had circulated his own resolution that did not mention the attack and sought to distance the deaths of Officers Brian Sicknick and Jeffrey Smith from the date of Jan. 6 because they both died in the following days. Authorities recently charged two suspected rioters for assaulting Sicknick with a chemical spray, but it remains unknown if that exposure caused his death. Smith died by suicide several days later.

Democratic House Speaker Nancy Pelosi’s bill “does not honor anyone, but rather seeks to drive a narrative that isn’t substantiated by known facts,” he said. “We absolutely do want to show our gratitude and respect for the U.S. Capitol Police, so I removed the speaker’s false and politicized narrative in order to arrive at legislation that truly honors those who selflessly serve us in Congress.”

Cloud said his disagreement was with other language used in the resolution.

“I have always stood by and supported our brave law enforcement and still do but this bill was not truly about that despite its name,” he said in a statement. “Instead of simply being about honoring the Capitol Police who bravely protected the Capitol on January 6th, Speaker Pelosi included damaging language that unnecessarily weighs down the bill. The text refers to the Capitol as the temple of democracy — simply put, it’s not a temple and Congress should not refer to it as one. The federal government is not a god. “

Gooden did not immediately respond to a request for comment.

Republican U.S. Reps. Jodey Arrington of Lubbock and Kevin Brady of the Woodlands did not vote, but 30 other House members from Texas, including Democrats and Republicans, backed the resolution.

The resolution designating the honor was sponsored by Pelosi.

The legislation stated that “on January 6, 2021, a mob of insurrectionists forced its way into the U.S. Capitol building and congressional office buildings and engaged in acts of vandalism, looting and violently attacked Capitol Police officers.”

MARSHALL — A suspect in the shooting of a Marshall News Messenger and Longview News-Journal delivery driver has been arrested, according to Marshall police.

Jose Manuel Galvan, 20, of Marshall was arrested Friday on charges of aggravated assault with a deadly weapon, a second-degree felony.

The investigation of the crime scene led officers to believe the shooter had fired from a second story window in the 600 block of Oak Street in Marshall.

Officers made contact with a person at the residence, later identified as Galvan. Galvan was uncooperative with officers and was detained while the investigation was conducted. Preliminary gunshot residue swabs indicated he recently fired a weapon.

Detectives with the Marshall Police Department obtained a search warrant for Galvan’s residence and found an AR-15 rifle, spent shell casings and a large quantity of illegal products containing the chemical from marijuana, police said.

Marshall police said around 5:45 a.m. Friday, an officer heard multiple gunshots near the area he was patrolling on Oak Street, and 911 calls started coming in reporting a shooting in that area.

A 34-year-old woman who was shot was later identified as a newspaper carrier.

Roberta Carlisle said she was home with her daughter and heard six shots from her bedroom window, which woke her up Friday morning. She then walked to the window to look outside, seeing a mass of other neighbors gathering around the newspaper carrier’s vehicle parked outside of Carlisle’s home.

According to Steven Briggs, the regional director of circulation for the newspapers, the carrier was shot in the back, and the bullet went through her. She was able to get to her car but then dropped to her knees and called her husband, who called 911. She also called 911.

Nearby residents who called 911 reported a woman screaming.

“She always wants to help customers, and this one had a special request to have the paper thrown under the partially-opened garage door to protect the paper from the elements,” Briggs said. “She was walking back (to her vehicle) when it happened.”

Briggs said he could not believe “this happened to someone throwing newspapers” and described the victim as an exceptional worker who has several jobs.

“She works multiple jobs including assistant manager at a convenience store,” he said. “Sometimes she gets off her one job and goes right to work throwing newspapers. She works hard and makes sure her customers are taken care of. If there is ever an issue, she takes care of it.”

Police did not comment on a possible motive in the shooting or whether the carrier was targeted.