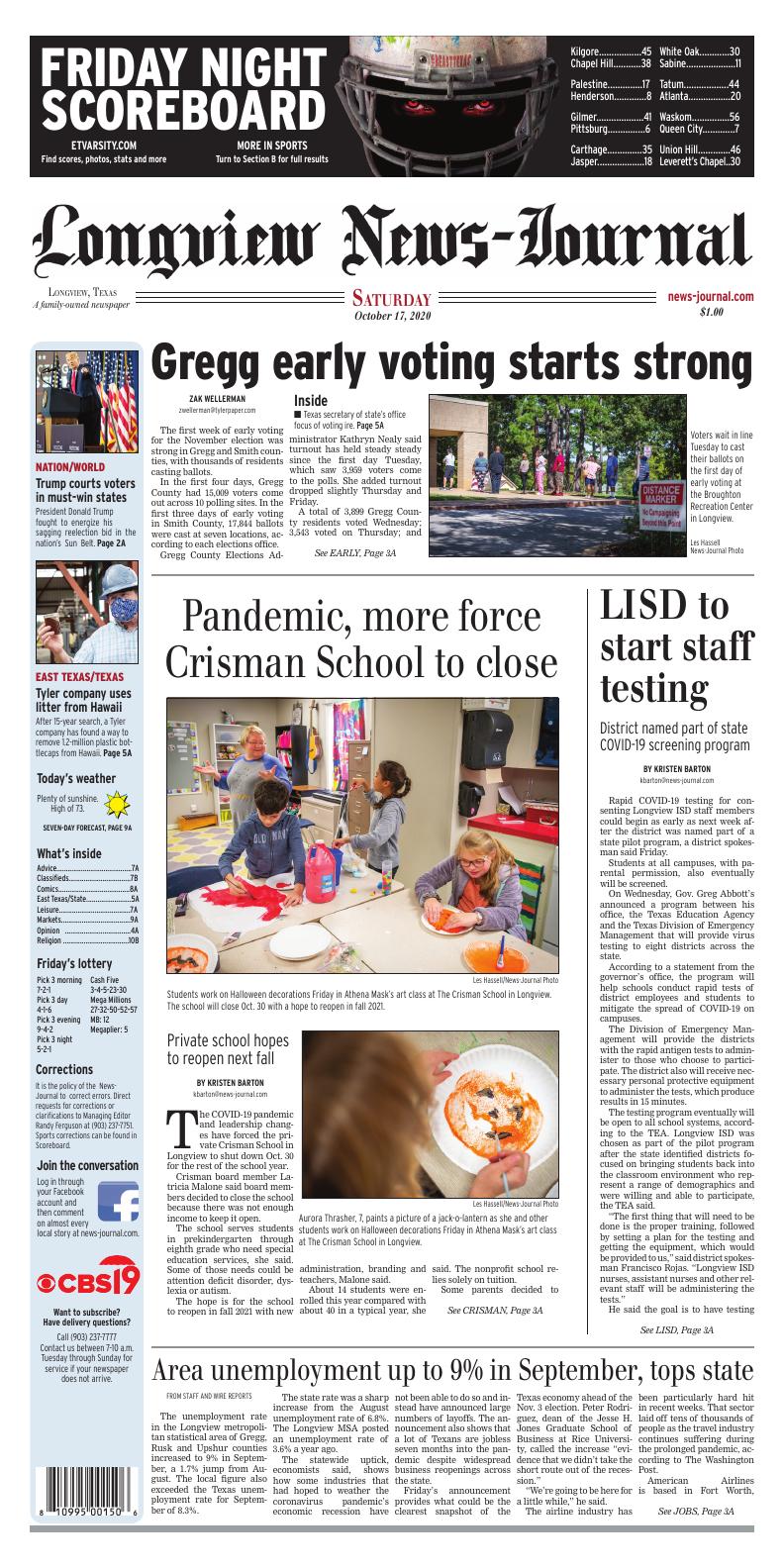 Voters wait in line Tuesday to cast their ballots on the first day of early voting at the Broughton Recreation Center in Longview.

The first week of early voting for the November election was strong in Gregg and Smith counties, with thousands of residents casting ballots.

In the first four days, Gregg County had 15,009 voters come out across 10 polling sites. In the first three days of early voting in Smith County, 17,844 ballots were cast at seven locations, according to each elections office.

There has been an average of 400 people per voting location each day, according to the Gregg County Elections Office.

“If we did not have those 10 locations, the lines would have been horrendous,” she said.

She strongly encouraged residents to take advantage of the extra locations and the extra week to cast an early ballot.

For those who haven’t voted, Nealy said they should come in the second week of early voting rather than the last.

“Take advantage of the second week. Whatever you do, don’t wait until Election Day,” she said.

She added people should learn which county they’re registered to vote in before coming to the polls.

The Judson Community Center was consistently been the busiest polling place all week in Gregg County, while Elderville Community Center dropped slightly after having a big turnout as a new early voting location, Nealy said.

She added one rumor going around is that a ballot becomes ineffective if it has a mark on it; however, the voting clerk must sign any paper ballot.

Another rumor is that votes by mail will not be counted, which is incorrect.

“If you voted and mailed your own ballot, it is safe and secure,” Nealy said. “The post office has been doing excellent job getting ballots to us in a timely manner.”

Nealy added that 99% of voters come into polling sites with masks and that, when offered gloves, 90% of people have chosen to wear them.

Social distancing markings are used at the voting sites, and election officials use hand sanitizer and wipes to clean surfaces, she said.

There have been one or two incidents of poll workers requesting people to remove political-themed clothing, but the voters ended up removing the items without confrontation, Nealy said, noting most voters have been polite and kind.

Nealy explained that three workers and three machines in early voting are normal for Gregg County, and this also helps limit the number of people coming in the building for COVID-19 safety precautions.

Students work on Halloween decorations Friday in Athena Mask’s art class at The Crisman School in Longview. The school will close Oct. 30 with a hope to reopen in fall 2021.

Aurora Thrasher, 7, paints a picture of a jack-o-lantern as she and other students work on Halloween decorations Friday in Athena Mask’s art class at The Crisman School in Longview. The school will close Oct. 30 with a hope to reopen in fall 2021.

Aurora Thrasher, 7, cuts out a jack-o-lantern she painted as she and other students work on Halloween decorations Friday in Athena Mask’s art at The Crisman School in Longview. The school will close Oct. 30 with a hope to reopen in fall 2021.

The COVID-19 pandemic and leadership changes have forced the private Crisman School in Longview to shut down Oct. 30 for the rest of the school year.

Crisman board member Latricia Malone said board members decided to close the school because there was not enough income to keep it open.

The school serves students in prekindergarten through eighth grade who need special education services, she said. Some of those needs could be attention deficit disorder, dyslexia or autism.

The hope is for the school to reopen in fall 2021 with new administration, branding and teachers, Malone said.

About 14 students were enrolled this year compared with about 40 in a typical year, she said. The nonprofit school relies solely on tuition.

Some parents decided to homeschool or send their children elsewhere because they could not afford tuition during the COVID-19 pandemic, Malone said.

A leadership change also caused issues for the school, she added. Former Head of School Laura Lea Blanks, who had been at Crisman for about 10 years, resigned in September.

“That left the teachers to run the school, which had some difficulties,” she said. “Someone needs to oversee the day-to-day activities. If (the school) reopened in the fall, it would be with a new head of school.”

One of the children at the school is Malone’s daughter, Landri, 9, who has attended Crisman since she was 4.

Landri has some ADD and sensory sensitivities, Malone said. Being in classes that have only about eight to 10 students helped Landri perform better in school.

“That’s why she thrived in that environment, because there were limited distractions and she had a specialized teacher that could help her to learn just by spending more one-on-one time with her,” Malone said. “They make revisions to the modalities of teaching and learning so these kids are not so overwhelmed as in the public school system.”

Crisman celebrated its golden anniversary in 2019. The school was founded in 1969 by Jo Nan Johnson as The Windmere School, and the campus within Winterfield United Methodist Church moved to its home on Eastman Road in 1983.

The 9-acre campus and building were donations of board member O. Wayne Crisman, who became the namesake of Crisman Preparatory School, which was officially renamed The Crisman School.

“Crisman teaches twice-exceptional students with asynchronous development to be successful academically, socially and emotionally,” Blanks said in a May 2019 News-Journal story. “Our children are brilliant. ... One of the things we say is, every child is smart in their own way, but if you judge a fish by its ability to climb a tree, he will spend his whole life thinking he’s a failure.”

The unemployment rate in the Longview metropolitan statistical area of Gregg, Rusk and Upshur counties increased to 9% in September, a 1.7% jump from August. The local figure also exceeded the Texas unemployment rate for September of 8.3%.

The statewide uptick, economists said, shows how some industries that had hoped to weather the coronavirus pandemic’s economic recession have not been able to do so and instead have announced large numbers of layoffs. The announcement also shows that a lot of Texans are jobless seven months into the pandemic despite widespread business reopenings across the state.

Friday’s announcement provides what could be the clearest snapshot of the Texas economy ahead of the Nov. 3 election. Peter Rodriguez, dean of the Jesse H. Jones Graduate School of Business at Rice University, called the increase “evidence that we didn’t take the short route out of the recession.”

“We’re going to be here for a little while,” he said.

The airline industry has been particularly hard hit in recent weeks. That sector laid off tens of thousands of people as the travel industry continues suffering during the prolonged pandemic, according to The Washington Post.

“What we saw with companies like the airlines and others is happening throughout the economy,” Rodriguez told The Texas Tribune. “Airlines held out in hope for more rapid recovery. But as that hope faded, a lot of them cut back more and made tough choices.”

The U.S. Department of Labor is expected to release the state-by-state unemployment rates Tuesday. A spokesperson for the workforce commission said next week’s release from the labor department will also show Texas’ unemployment rate in September was 8.3%.

Rapid COVID-19 testing for consenting Longview ISD staff members could begin as early as next week after the district was named part of a state pilot program, a district spokesman said Friday.

Students at all campuses, with parental permission, also eventually will be screened.

On Wednesday, Gov. Greg Abbott’s announced a program between his office, the Texas Education Agency and the Texas Division of Emergency Management that will provide virus testing to eight districts across the state.

According to a statement from the governor’s office, the program will help schools conduct rapid tests of district employees and students to mitigate the spread of COVID-19 on campuses.

The Division of Emergency Management will provide the districts with the rapid antigen tests to administer to those who choose to participate. The district also will receive necessary personal protective equipment to administer the tests, which produce results in 15 minutes.

The testing program eventually will be open to all school systems, according to the TEA. Longview ISD was chosen as part of the pilot program after the state identified districts focused on bringing students back into the classroom environment who represent a range of demographics and were willing and able to participate, the TEA said.

“The first thing that will need to be done is the proper training, followed by setting a plan for the testing and getting the equipment, which would be provided to us,” said district spokesman Francisco Rojas. “Longview ISD nurses, assistant nurses and other relevant staff will be administering the tests.”

He said the goal is to have testing available Monday through Friday, but the district has not been informed how long the screenings will continue as part of the state program.

For parental consent, Rojas said forms will be filled out and signed by parents or guardians per student, not family, for every time a student gets tested.

“If a parent at first doesn’t want their child to be tested but changes their mind, they will need to fill out a new form,” he said.

If a student or staff member tests positive, he or she will be sent home and will need to quarantine, Rojas said. That person then will be allowed back on campus with a doctor’s note or other type of documentation from an authorized testing location stating a new COVID-19 test was negative.

Students and staff may return to a campus after at least 10 days have passed since symptoms first appeared, Rojas said.

When Longview ISD first started discussing districtwide COVID-19 testing, it was in partnership with the company US MedTest. It was still unclear Friday what taking part in the state program means for that partnership.

The district began a two-week trial run of virus testing Oct. 7 at Longview High School with US MedTest.

Board President Ginia Northcutt declined to comment on the state program Wednesday, saying it had not been presented to trustees.

When asked about why the state program was not presented to the Longview ISD board, Rojas said, “The district administration has remained in dialogue with the board about testing for some time now. As information is received, it is shared with the board as well as the public.” 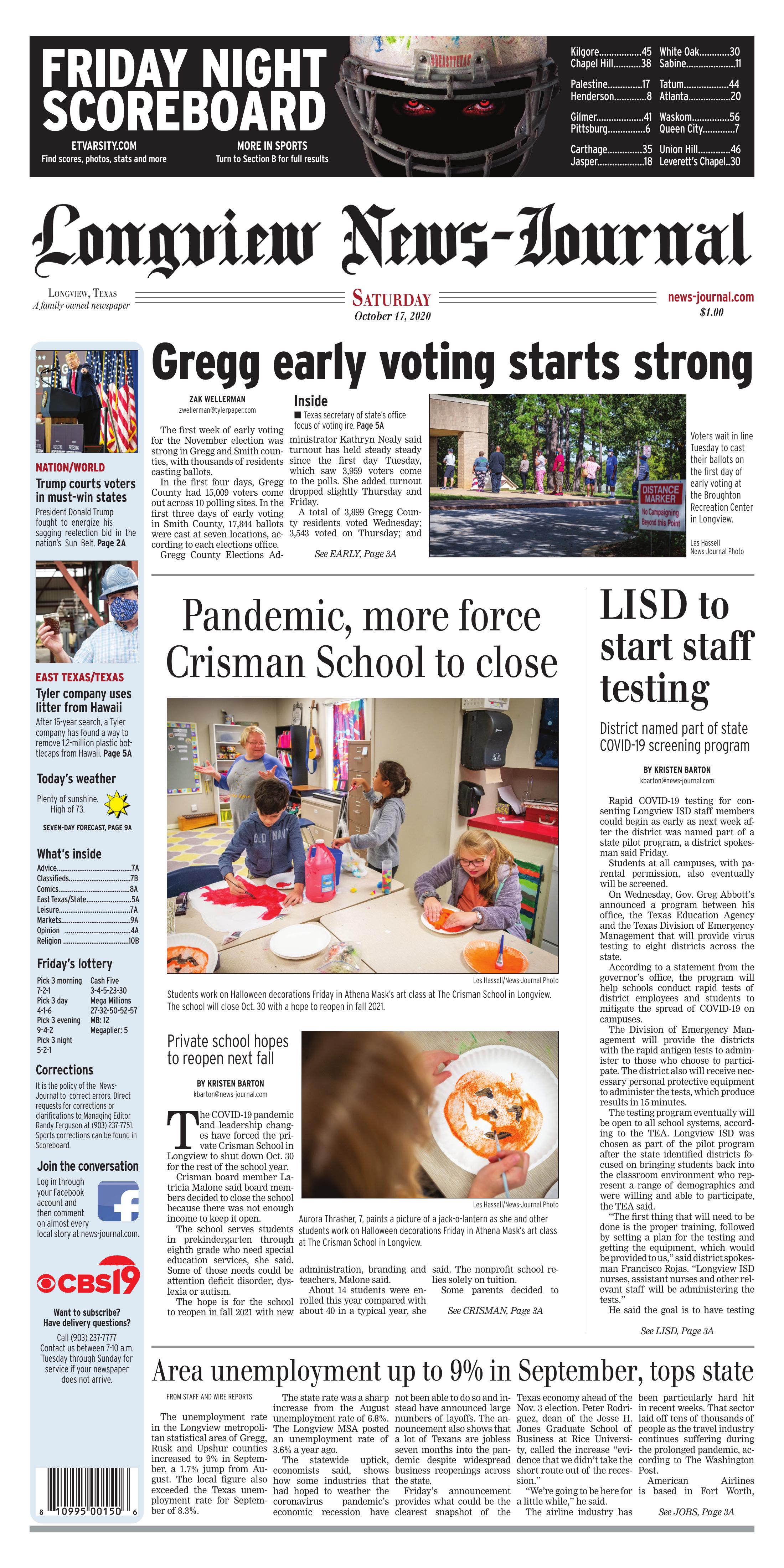