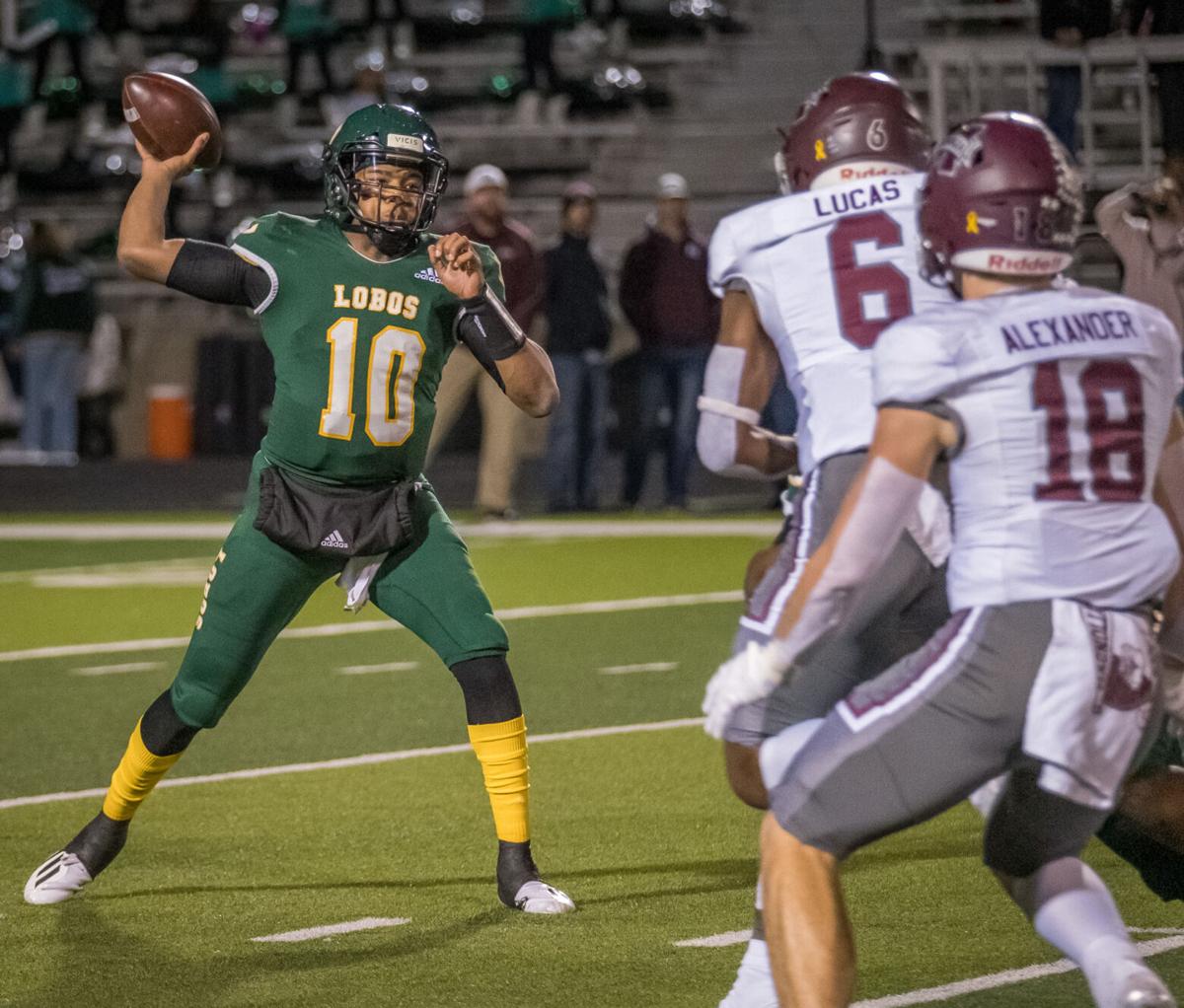 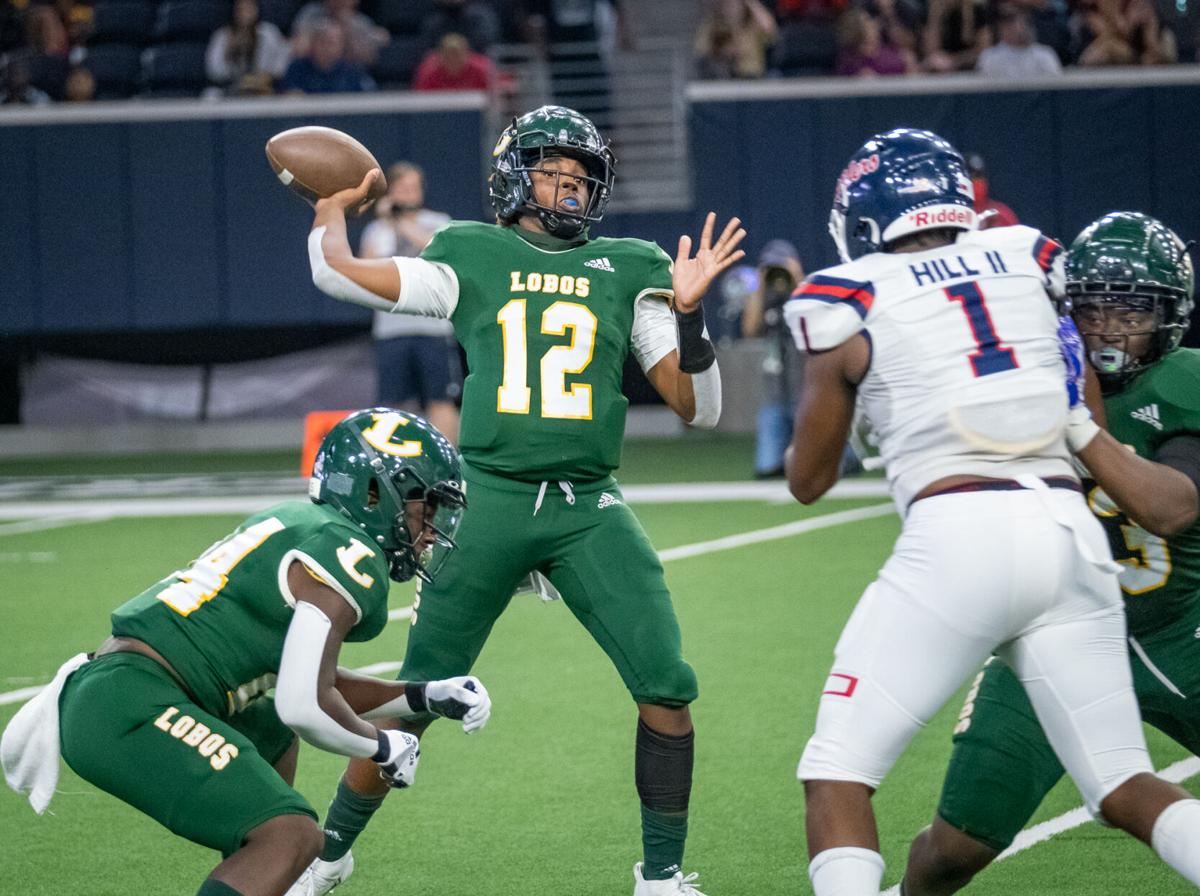 Longview’s Jordan Allen looks for a receiver during an Aug. 28 game against Denton Ryan in Frisco.

Longview’s Jordan Allen looks for a receiver during an Aug. 28 game against Denton Ryan in Frisco.

Longview knew it had two quality options at the quarterback position before the 2021 high school football season began, and the Lobos have leaned on the men under center throughout the campaign to reach the area round of the Class 5A Division I postseason.

One of those players is Jordan Allen, a junior. The other is senior Joshua Thomas, who transferred from Jefferson High School.

“Jordan has a great grasp of our offense and what we’re doing schematically, and the understanding of where to go with the ball or the run checks,” said Longview athletic director and head football coach John King. “Josh has gotten much better with that as well.”

“Josh may have the stronger arm of the two, but Jordan can throw the ball effectively for us as well,” he continued. “So, they both bring great things to our team, and we don’t have to tailor the needs or skill sets of one of the quarterbacks. We can run our offense with both guys.”

Allen was familiar with Longview’s system from his past seasons with the program, and leaned on his past experience to help lead Longview to a 7-3 record before the postseason. He earned 1,158 passing yards, 101 rushing yards, 11 passing touchdowns and eight rushing touchdowns during his 10-game regular season experience.

“The main thing I take out of the [quarterback] battle is having somebody to compete with daily,” said Allen. “I feel like me as a player, I do better when I have competition.”

Thomas suffered a mid-season injury and missed four district games, but recovered and returned to the field in time for his team’s playoff run. He has shined in his time on the field, as evident by his 665 passing yards, 384 rushing yards, eight rushing touchdowns and five passing touchdowns in his seven game appearances this season.

“I was training and rehabbing to get back into the groove of everything,” said Thomas. “Coach [Deirdre] Scotter got me back as quick as possible, and I’m thankful for that.”

He made some early noise with his five-of-six passing performance for 166 yards and two touchdowns, and seven carries for 61 yards and a score in Longview’s 46-20 win against rival Tyler Legacy on Sept. 10. Then, he threw for 99 yards and a touchdown, and carried the ball nine times for 38 yards in the Lobos’ 24-21 win against three-time defending Arkansas 7A state champion Bryant on Sept. 17.

When Thomas returned from his injury, he came up big with two critical late season performances. He didn’t start Longview’s 49-0 win against rival Tyler on Nov. 5, but played most of the contest and helped his team clinch both the second playoff seed from District 7-5A Division I and a home game in the opening round of the postseason. He completed four of his five passes for 124 yards, and carried the ball 11 times for 66 yards and a trio of touchdowns.

That earned him the start in Longview’s bi-district playoff game against Magnolia on Nov. 12. He made the most of the opportunity, and led the Lobos to a 45-24 win. He finished the outing with 198 yards and two touchdowns on an 11-of-16 passing performance, and also recorded 168 yards and three scores on 16 carries to add another week to his team’s season.

“It was like any other moment,” Thomas said of his playoff start last week. “Just go out there, do what I can do, and have fun. I was really happy.”

Regardless of how long Longview’s 2021 playoff run lasts, King expects both quarterbacks to continue to play a role in the Lobos’ success.

“I’m not going to tell you that they’re both going to play or have equal snaps, but they both have a very important role on this football team,” said King.

Longview will even be in good hands next season after Thomas graduates in the spring. Allen has earned valuable experience during his junior high school football season in 2021, and will be better prepared for his enhanced leadership role as a senior in 2022.