Skip to main content
You are the owner of this article.
Edit Article Add New Article
You have permission to edit this article.
Edit
Welcome, Guest
Home
Sports
Schools
Best Preps
The Zone
Columns
Photo Galleries
Pro
Player of the Week
1 of 2 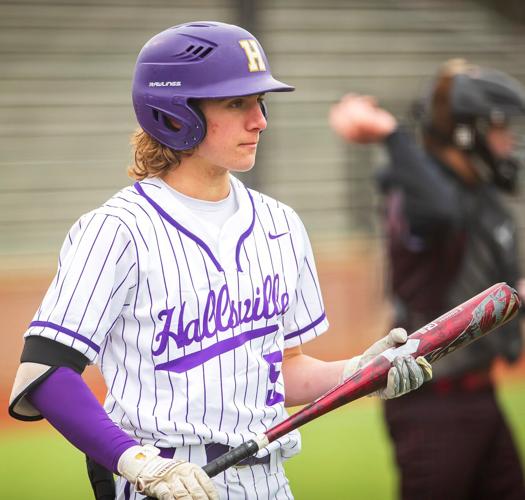 Hallsville’s Sawyer Dunagan waits his turn to bat against Rusk in a game earlier this season at Mike Carter Field in Tyler. Dunagan had three hits and four RBI on Monday to help lead the Bobcats past Huntsville and into the second round of the Class 5A playoffs.

Hallsville’s Sawyer Dunagan waits his turn to bat against Rusk in a game earlier this season at Mike Carter Field in Tyler. Dunagan had three hits and four RBI on Monday to help lead the Bobcats past Huntsville and into the second round of the Class 5A playoffs.

LUFKIN — Sawyer Dunagan drove in four runs, Matt Houston capped a big series with three more hits and the Hallsville Bobcats advanced to the area round of the Class 5A playoffs with a 15-0 blowout win over Huntsville on Monday in the finale of a bi-district series.

Hallsville won the opener of the series at home (5-4), but fell 7-5 on Saturday in Huntsville to force a third-and-deciding game.

The finale was never in doubt.

The Bobcats scored twice in the top of the first, added three in the second, one in the third, two in the fifth and then erupted for seven in the sixth to turn things into a rout.

Hallsville moves on to face Cleburne in the area playoffs. That series is set to begin at 7 p.m. on Thursday in Hallsville, switching to Cleburne Friday for a 4 p.m. contest and moving to Whitehouse for a 2 p.m. battle if a third game is needed.

Cleburne opened the playoffs with a sweep (6-1, 4-1) of Highland Park.

Houston, who finished the series 5-for-9 with a double, triple and seven RBI, led off Monday’s game with a triple and courtesy runner Jack Holladay scored on an Logan Jones single. Jones later came home on Ethan Miller’s single for a quick 2-0 lead.

In the second, a walk, error and bunt put a man on third and Houston drove him in with a sacrifice fly. Dunagan followed with a two-out, two-run single, and the Bobcats enjoyed a 5-0 cushion.

Carson Blakeley reached on an error in the third and scored on a single by Carter Rogas, and the Bobcats got RBI singles from Rogas and Houston in the fifth for an 8-0 lead before blowing things wide open in the sixth.

A walk and hit batsman put two men aboard, and Ethan Miller followed with an RBI double. The rest of the runs came on a two-run single by Blakeley, RBI singles from Rogas and Houston and a two-run double by Dunagan.

Grayson Werth worked five innings on the mound for the pitching win. He struck out three and walked two, scattering five hits. Blake Cox struck out two in a scoreless inning of work.