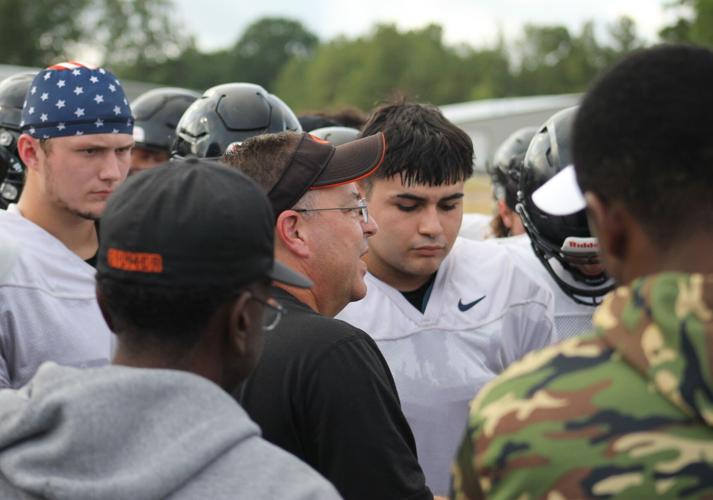 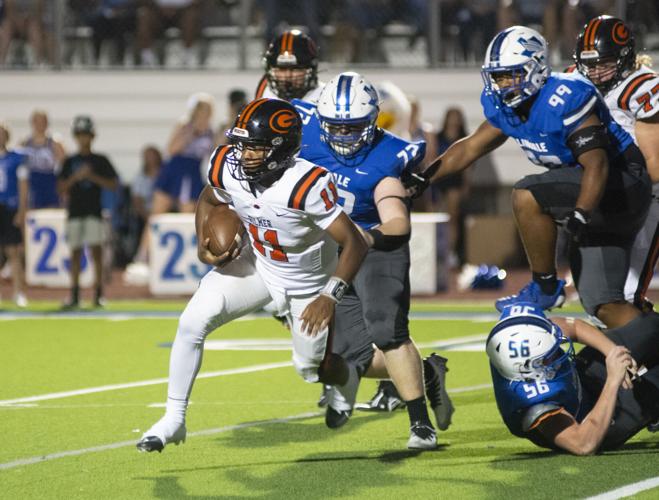 Gilmer quarterback Cadon Tennison looks for room as the Lindale Eagle defense works to make a stop on Friday at Eagle Stadium.

Gilmer quarterback Cadon Tennison looks for room as the Lindale Eagle defense works to make a stop on Friday at Eagle Stadium.

The halfway point of the 2022 Texas high school football season is quickly approaching, and Gilmer has still hung on to its status as one of the state’s best teams.

The Buckeyes are off and running after their second straight 4-0 season start, but their latest launchpad feels different because it’s the result of quality wins against a quartet of Class 4A Division I programs that advanced to the 2021 University Interscholastic League postseason.

“I would say the schedule was tougher overall,” Gilmer athletic director and head football coach Alan Metzel said of the early season competition that his team has already faced and overcome in 2022. “We’ve had to play teams that were ranked in the big school top 10 and 15, so that has been pretty daunting.”

Gilmer wouldn’t have reached a string of success like that without all the players who have stepped into the roles that were previously held by the former team starters-turned-school graduates of the Buckeyes’ run to the 2020 and 2021 Class 4A Division II state runner-up finishes.

“I think we’re starting to find out who we are and who the leaders are,” Metzel said of this year’s Gilmer football team. “Coming in, it was definitely a different feel. We are replacing eight offensive starters, including the quarterback. The offensive line, four out of five guys there we’ve had to replace. Seniors are beginning to step up and assert themselves. You got Brayden Seymour, who has stepped in at center. He’s not a big guy, but he is battling and really leading up there on the offensive line.”

“[Sophomore] Cadon [Tennison] is growing as a quarterback, he’s making more plays, and he’s feeling more comfortable in difficult situations,” he added. “[Junior] wide receiver Ta’Erik Tate has become a big-play threat for us this year, and [junior] running back Will Henderson had seven carries for 170 yards and two touchdowns [on Friday night]. Those guys are really coming into their own, and they’re now the guys who are going to make plays.”

Things seem to be falling into place for Gilmer again, but the state’s second-ranked Class 4A Division II team needs to remain focused on the road ahead during the back-to-back bye weeks that wrap up its September schedule if it wants to reach its late season aspirations.

The Buckeyes will also be expected to work on important areas of their game during the two-week stretch because their return to gameday action will begin with a front-loaded District 7-4A Division II schedule. They will travel to play a fellow East Texas juggernaut and the current Class 4A Division II fourth-ranked Pleasant Grove at Hawk Stadium on Oct. 7 before they host a fellow perennial power and current undefeated team in Liberty-Eylau a week later on Oct. 14.

“We’ve had a grind for four weeks in a row, and it’s probably a good time to catch our breath,” Metzel said of his team’s break. “This week, we’ll use it more as an off week. We’ll practice, but it’ll be a scaled back version. That second week, we’re going to treat it like we had a game. We’ll ramp it up, and it’ll be very competitive as we prepare for district [play].”