You have permission to edit this article.
Edit
Welcome, Guest
Home
Sports
Schools
Stats
The Zone
Columns
Photo Galleries
Pro
Player of the Week
1 of 5 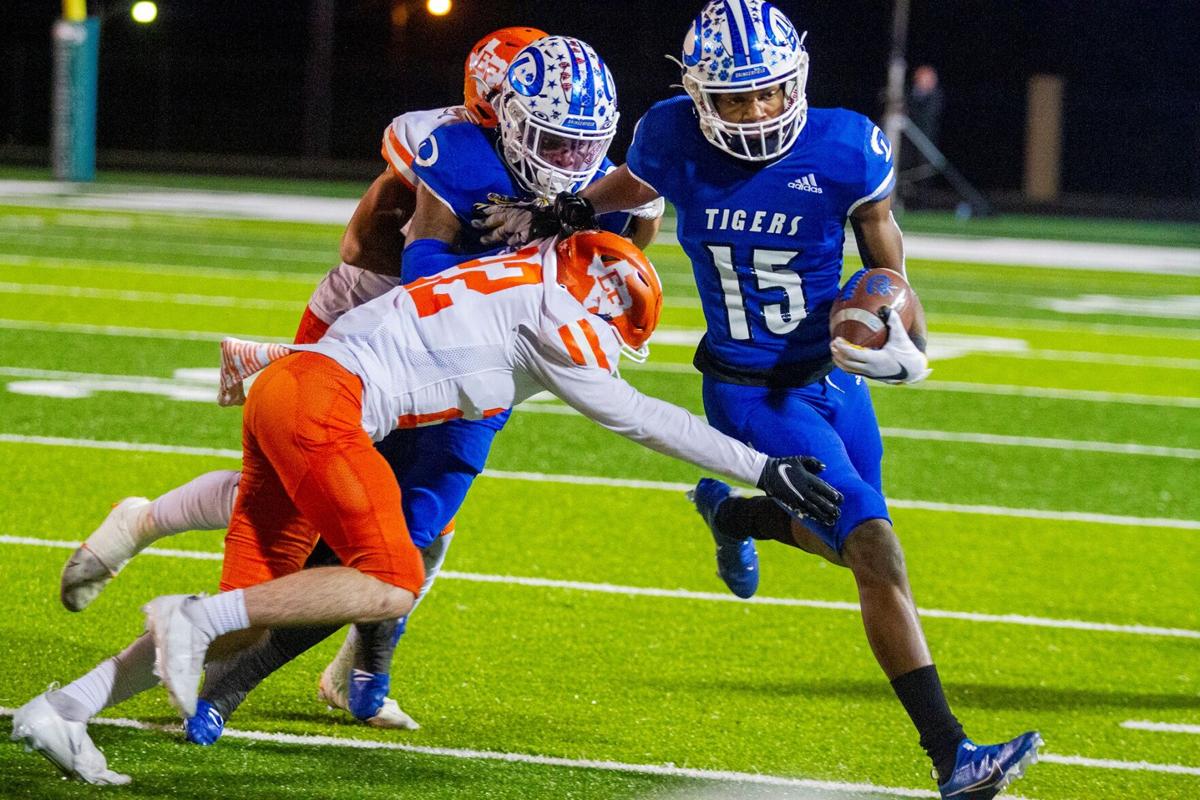 Dangerfield wide receiver CJ Gilbert heads to the sideline after catching a pass against Elysian Fields on Friday at Eagle Stadium in Tatum. 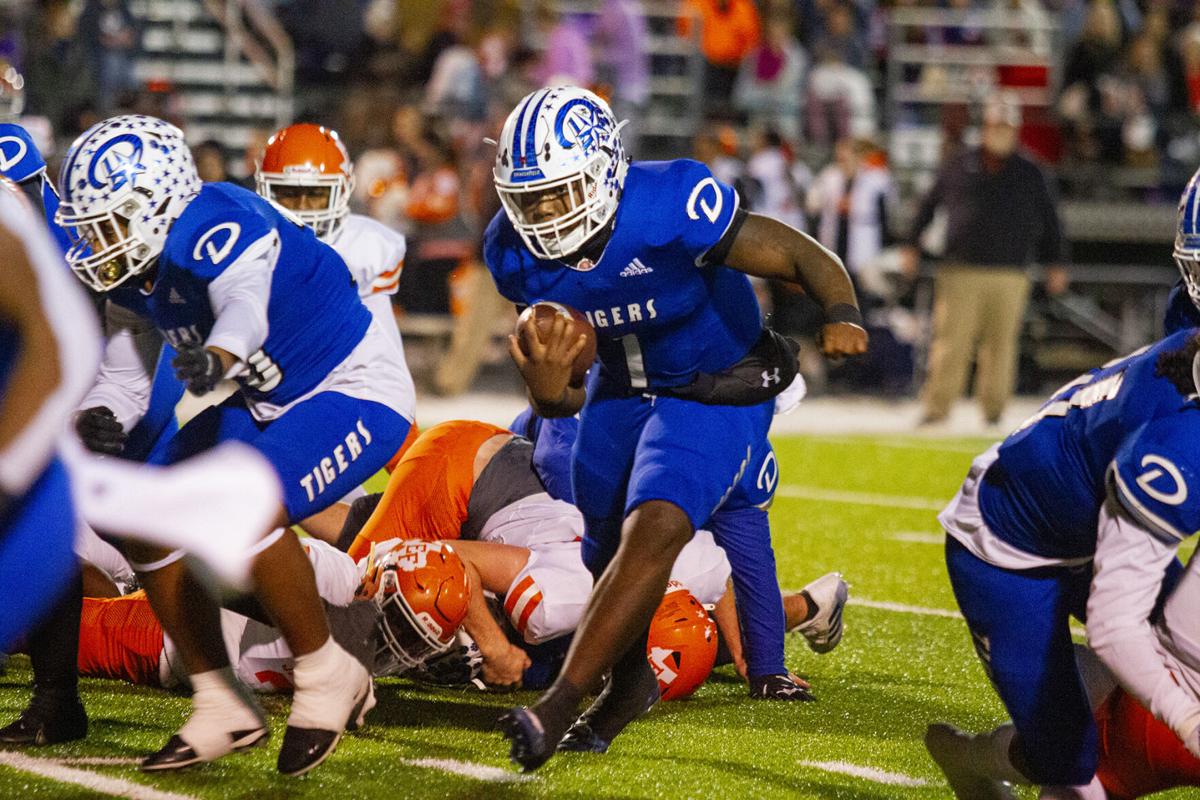 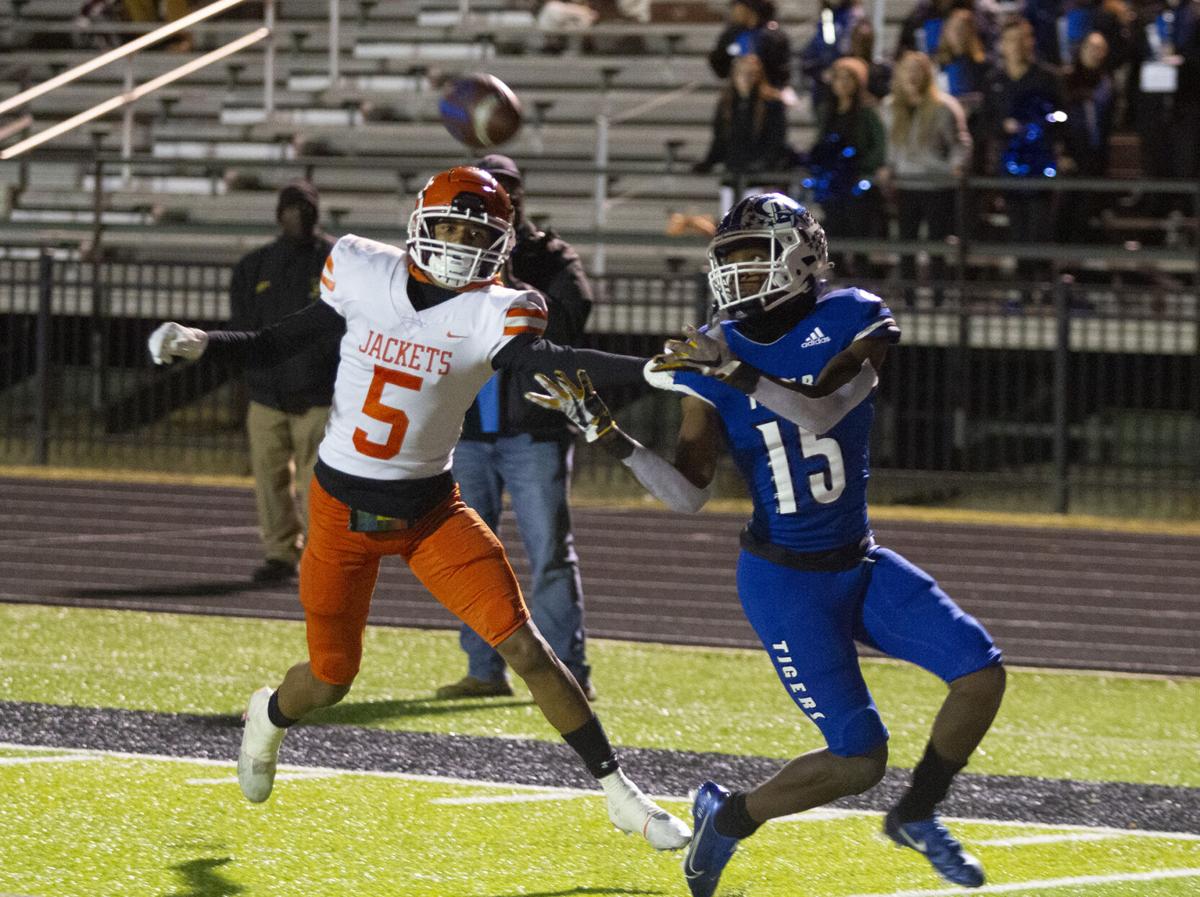 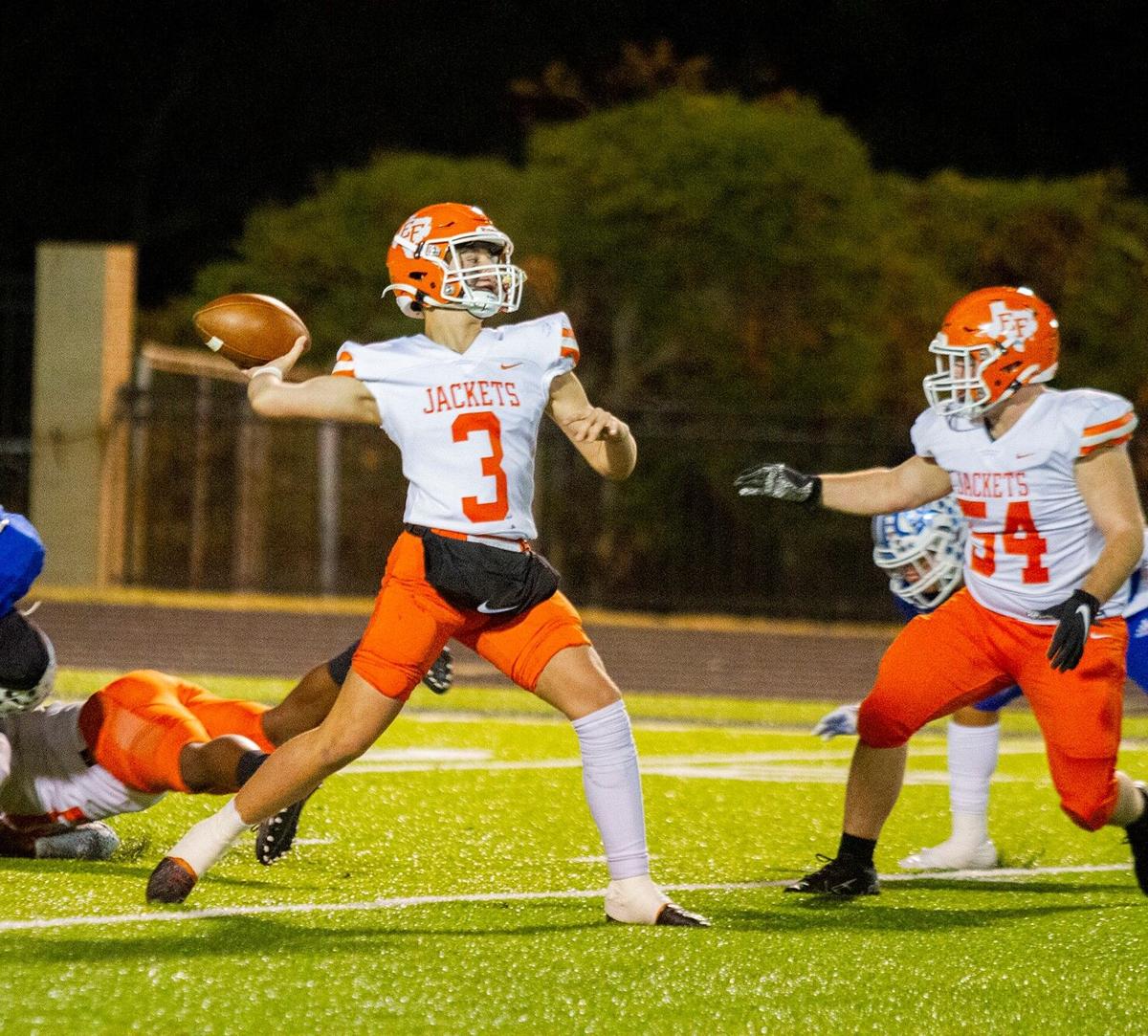 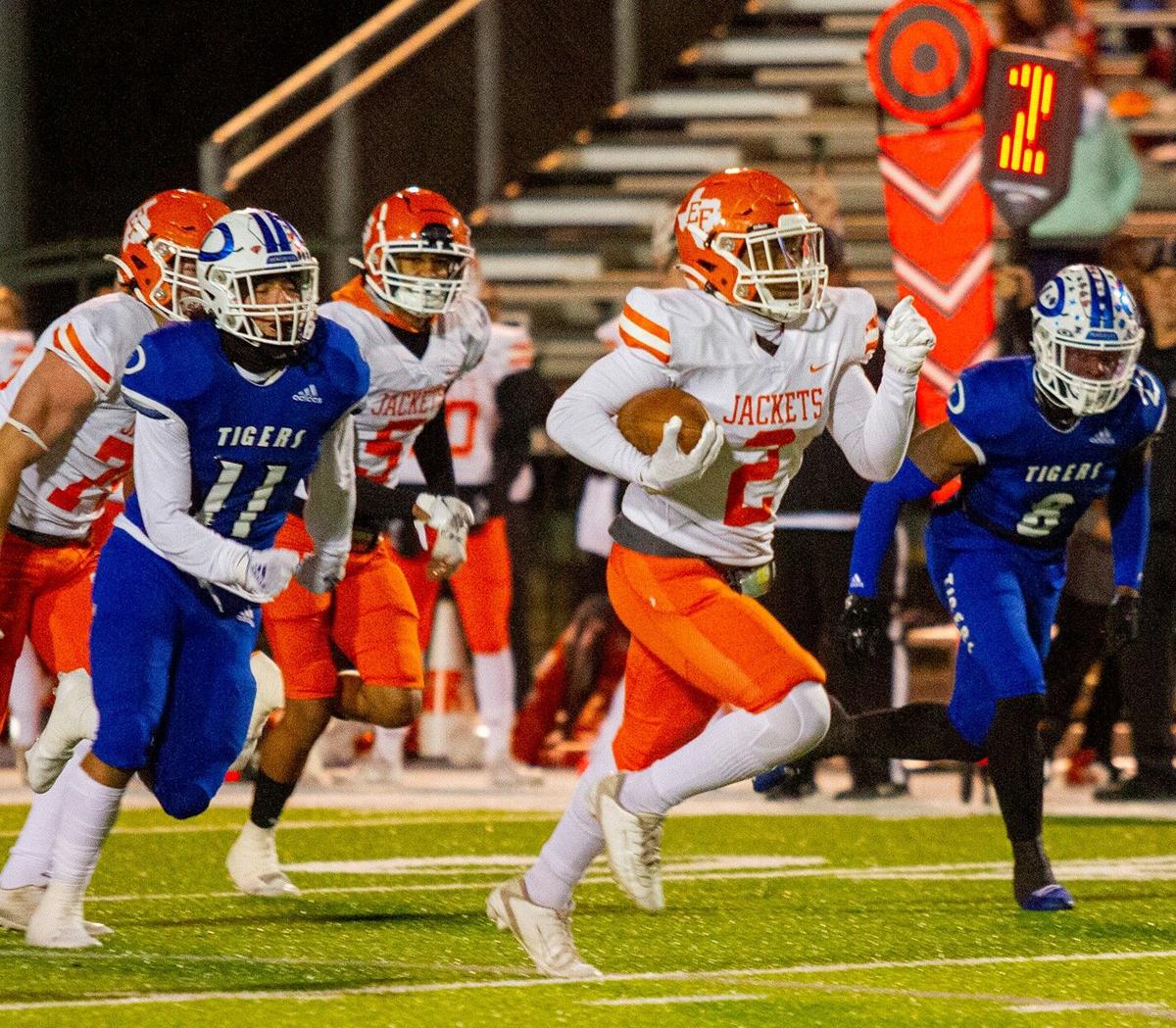 Elysian Fields running back Dravian Rather finds room to run against the Dangerfield defense on Friday, November 19, 2021 during the playoff football game at Eagle Stadium in Tatum. (Courtney Case/News-Journal Photo)

Dangerfield wide receiver CJ Gilbert heads to the sideline after catching a pass against Elysian Fields on Friday at Eagle Stadium in Tatum.

Elysian Fields running back Dravian Rather finds room to run against the Dangerfield defense on Friday, November 19, 2021 during the playoff football game at Eagle Stadium in Tatum. (Courtney Case/News-Journal Photo)

TATUM – Daingerfield used a quick-strike, video-game offense led by quarterback Dee Lewis, running back Dcorian Wright and an army of fleet receivers on the way to a 56-16 victory over Elysian Fields in a Class 3A Division 2 playoff game here in Eagle Stadium Friday night.

The win sends Daingerfield (10-2) into the third round of the playoffs next week, while EF’s season comes to a close at 9-3. The Yellow Jackets entered the game having handed the Tigers one of their two losses in a 44-28 victory earlier this season in Daingerfield.

But Friday’s game was a different story altogether, with Lewis spearheading a Tiger offense that racked up 607 total yards. The attack was also extremely balanced, with 297 yards on the ground and another 310 yards in the air. Lewis and his army of receivers – led by CJ Gilbert and Aeryn Hampton put on an aerial show that overwhelmed the Jacket secondary. Lewis finished 11-of-26 for 276 yards and six touchdowns and averaged just over 25 yards per completion.

Gilbert was his main target, hauling in eight catches for 206 yards and five scores, with Hampton averaging 52 yards on two catches, both of which were touchdowns.

Wright controlled the game on the ground, finishing with 247 yards on 26 carries and one touchdown.

For Elysian Fields, the Jackets were led by Dravian Rather’s 91 yards on 20 carries, with one touchdown.

The Jackets stayed close in the first quarter, forging a 14-14 tie entering the second quarter thanks to a couple of big plays of their own. But a 20-0 Daingerfield run in the second quarter gave the Tigers the momentum they needed to pull away and avenge the early season loss.

Daingerfield’s onslaught of big plays in the second quarter kept the Elysian Fields defense on its heels. The Tigers finished the first half with a whopping 414 yards of total offense on the way to a 34-14 lead at halftime.

The Tigers started the scoring in the first quarter, as Gilbert broke free on a 65-yard catch-and-run from Lewis for a 6-0 lead. Elysian Fields answered, however, on its fourth play after the kick when Rather scampered nearly untouched for a 55-yard scoring run. Following Jace Greenslate’s extra point, the Jackets owned a 7-6 lead with just 2:09 having elapsed in the game.

Daingerfield regained the lead on its next possession as Lewis hit Gilbert again on a 30-yard touchdown pass on a fourth-and-20 play. Lewis powered in the two-point conversion and the Tigers led 14-7.

The teams traded a couple of possessions each before Elysian Fields struck again with another big play. On first down from the Jacket 20 following a Daingerfield punt, Lawson Swank connected with Braden Manning on a wide receiver screen. Manning sprinted up the EF sideline and broke free for an 80-yard scoring play, and the game was tied at 14-14 following Greenslate’s extra point with seven seconds left in a wild opening stanza.

Daingerfield then began making its move in the second quarter. Wright broke free from 37 yards out to give the Tigers the lead again at 20-14, and then Lewis hit Hampton from 63 yards out and Daingerfield had a 28-14 lead following the two-point conversion pass to Gilbert with 9:45 left in the half.

EF’s defense stiffened and kept the Tigers within striking distance, but Daingerfield wasn’t done as the half drew to a close. Facing a third-and-8 from his own 11 with under a minute remaining, Wright scampered up the middle and sprinted 81 yards down to the EF 8. Two plays later, Lewis and Gilbert hooked up from three yards out for their third touchdown connection of the first two quarters, with 23 seconds left, and Daingerfield had a comfortable 34-14 lead as the teams went to the locker room.