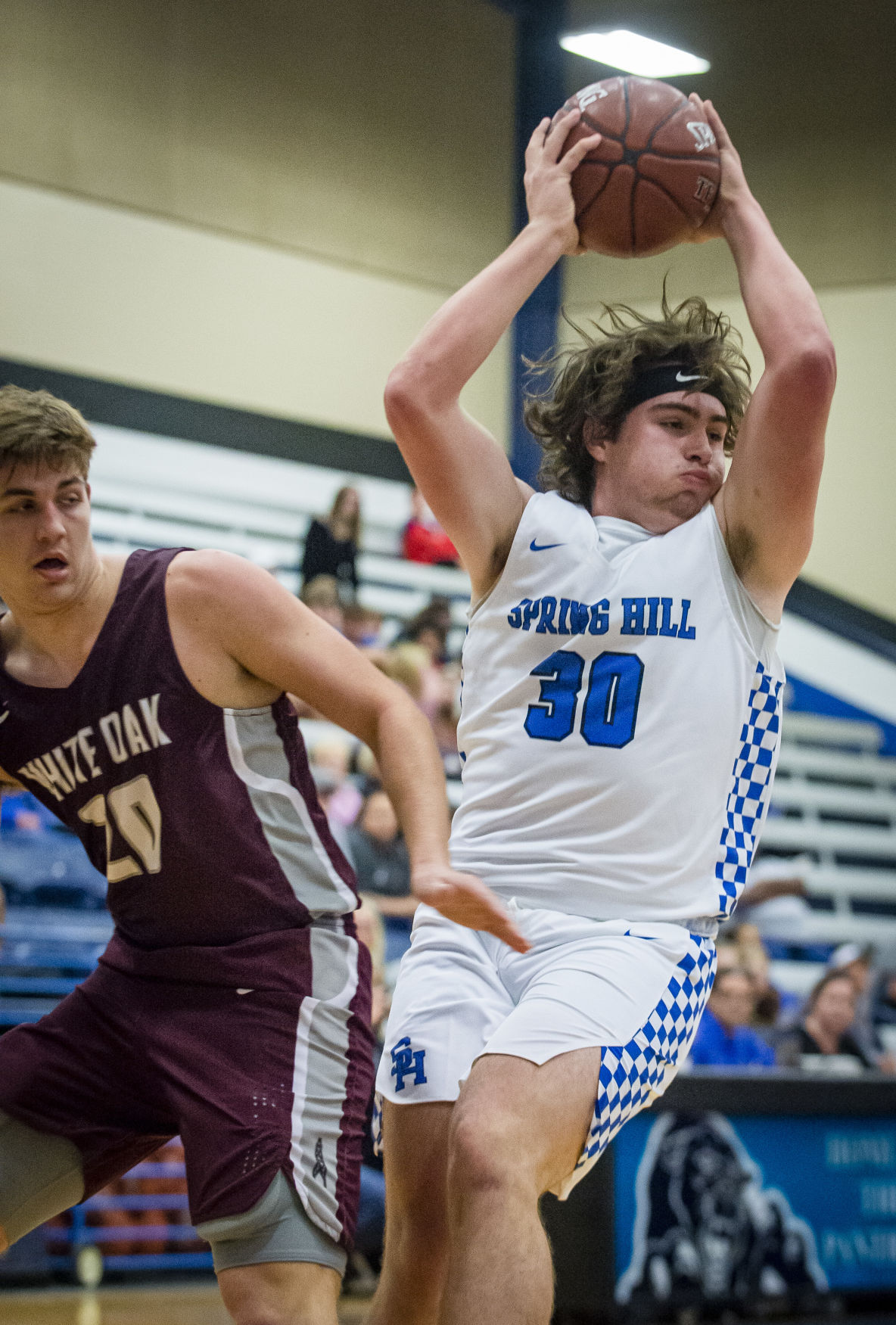 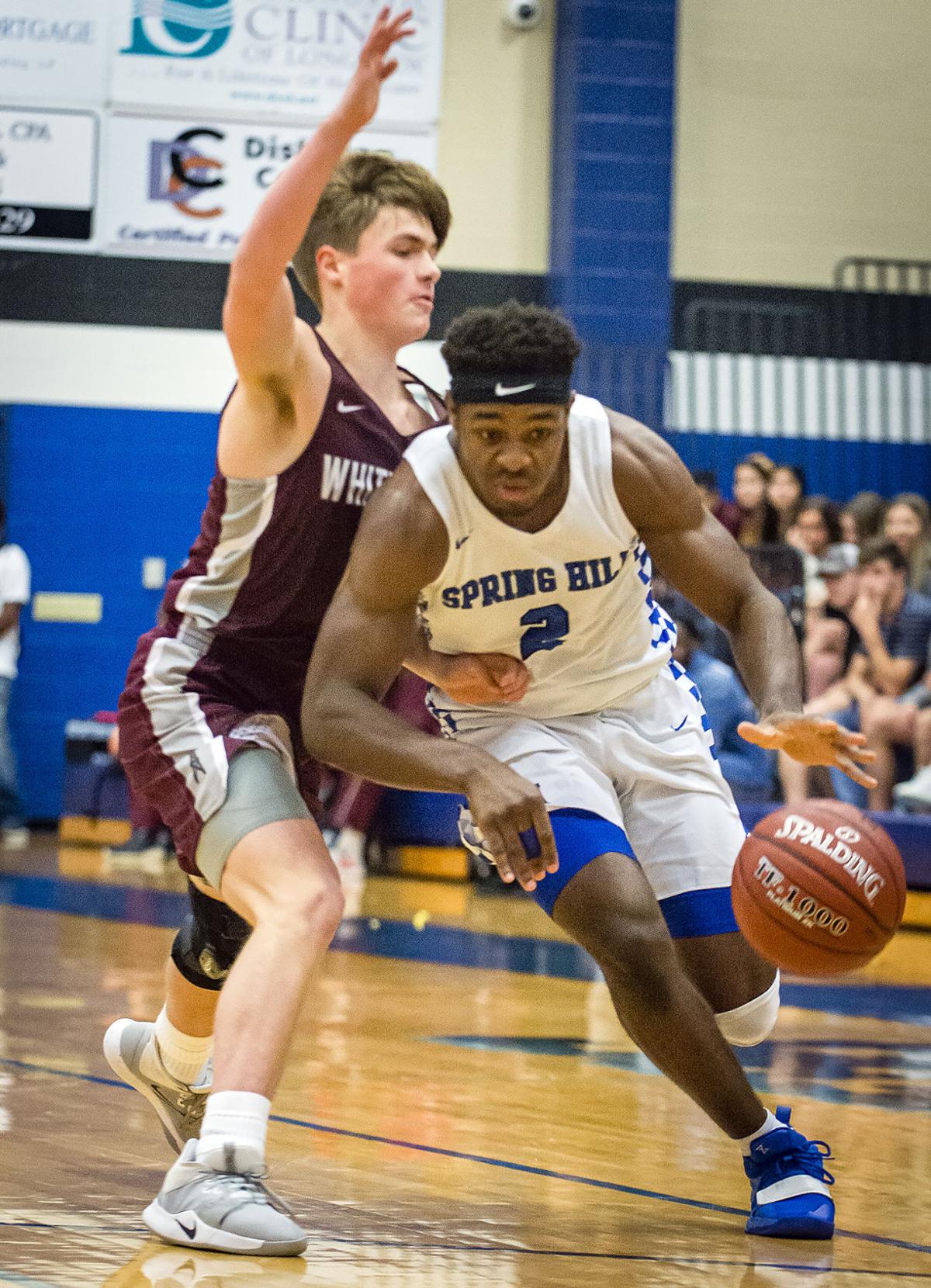 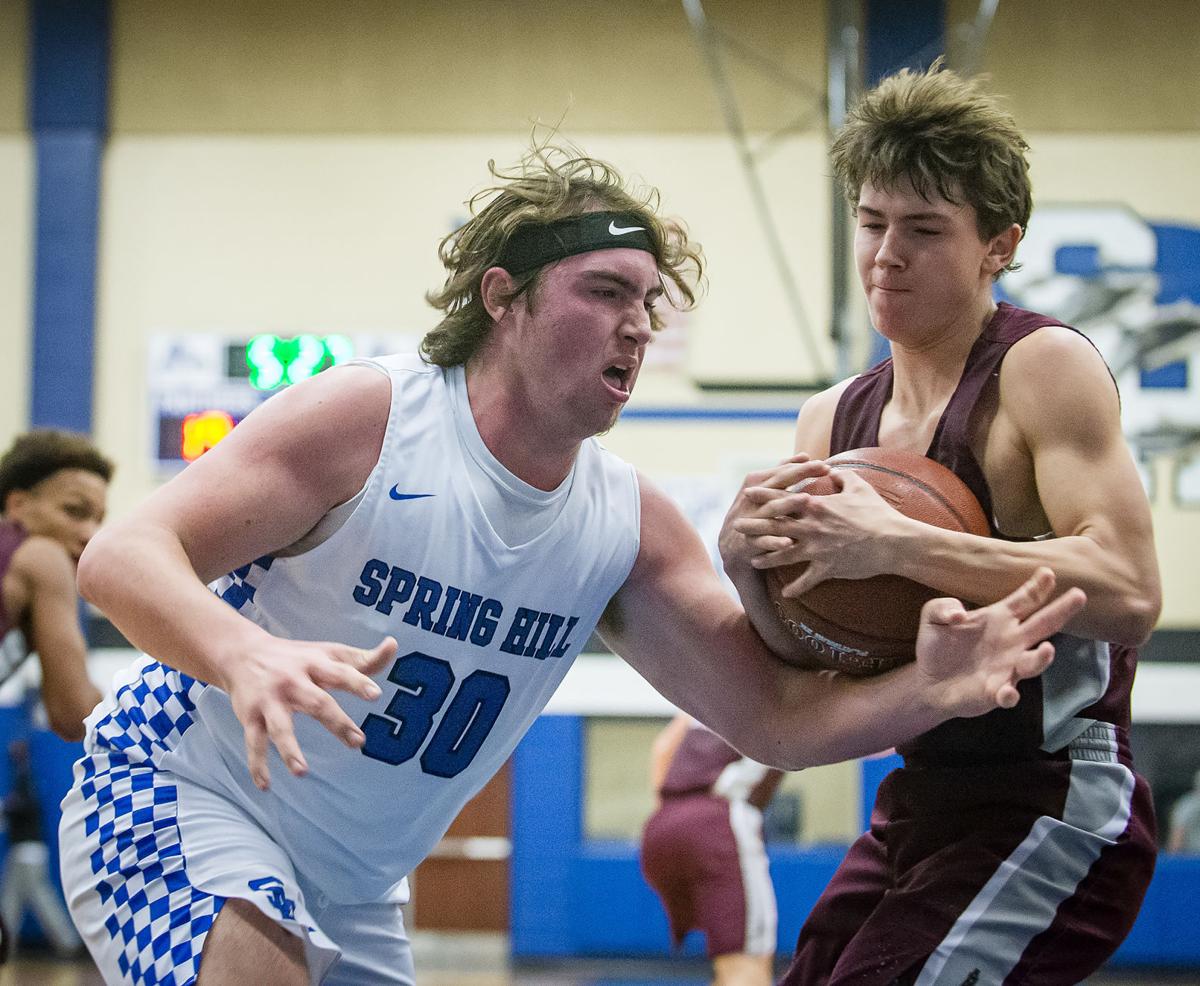 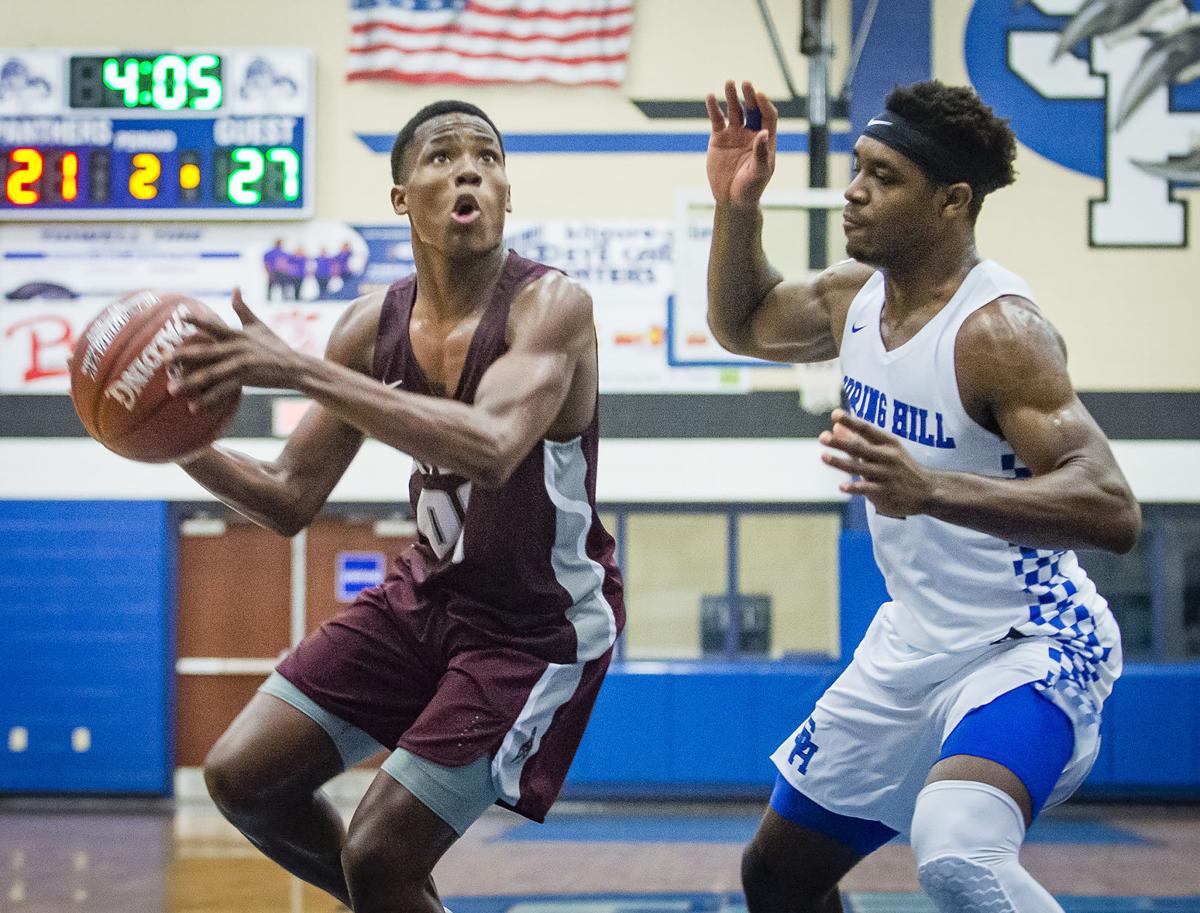 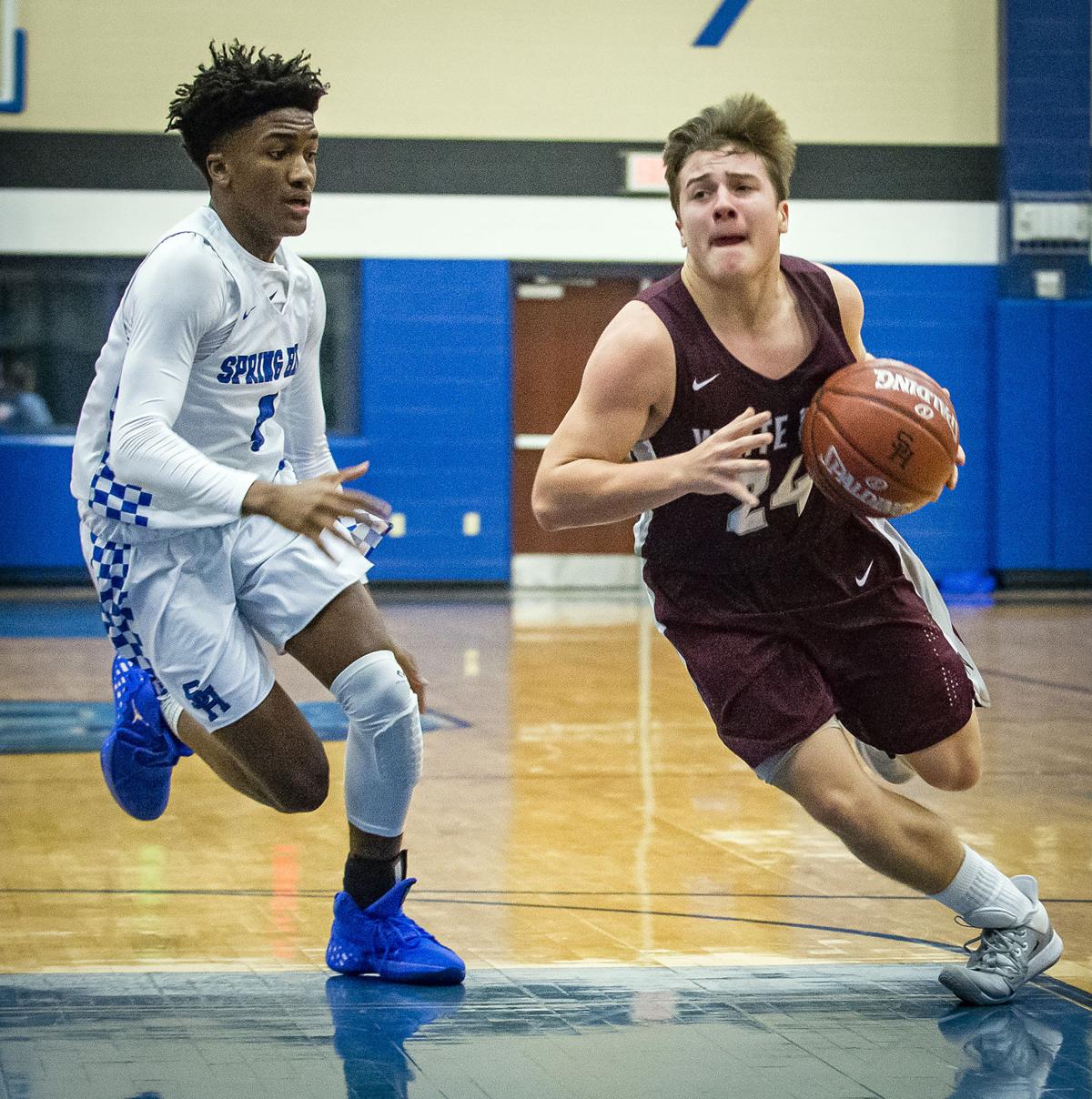 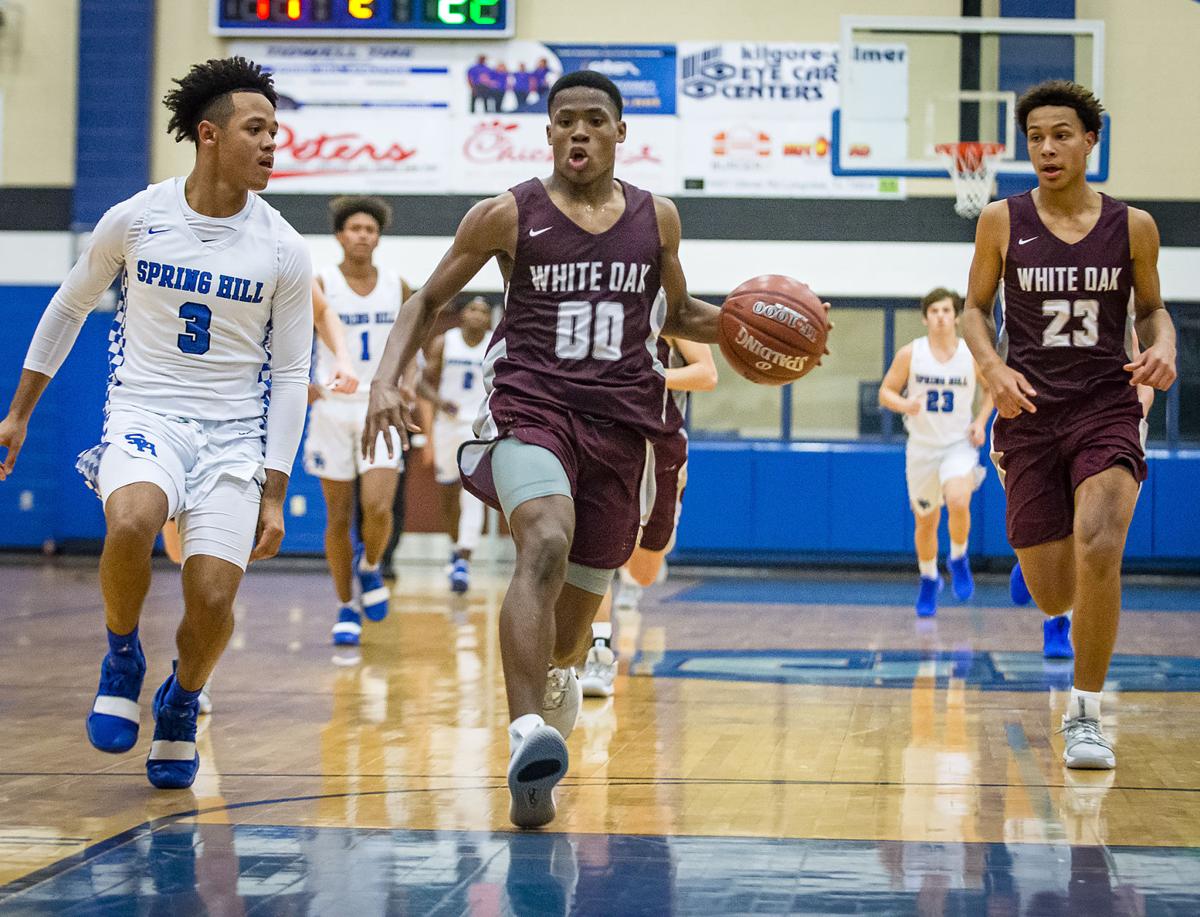 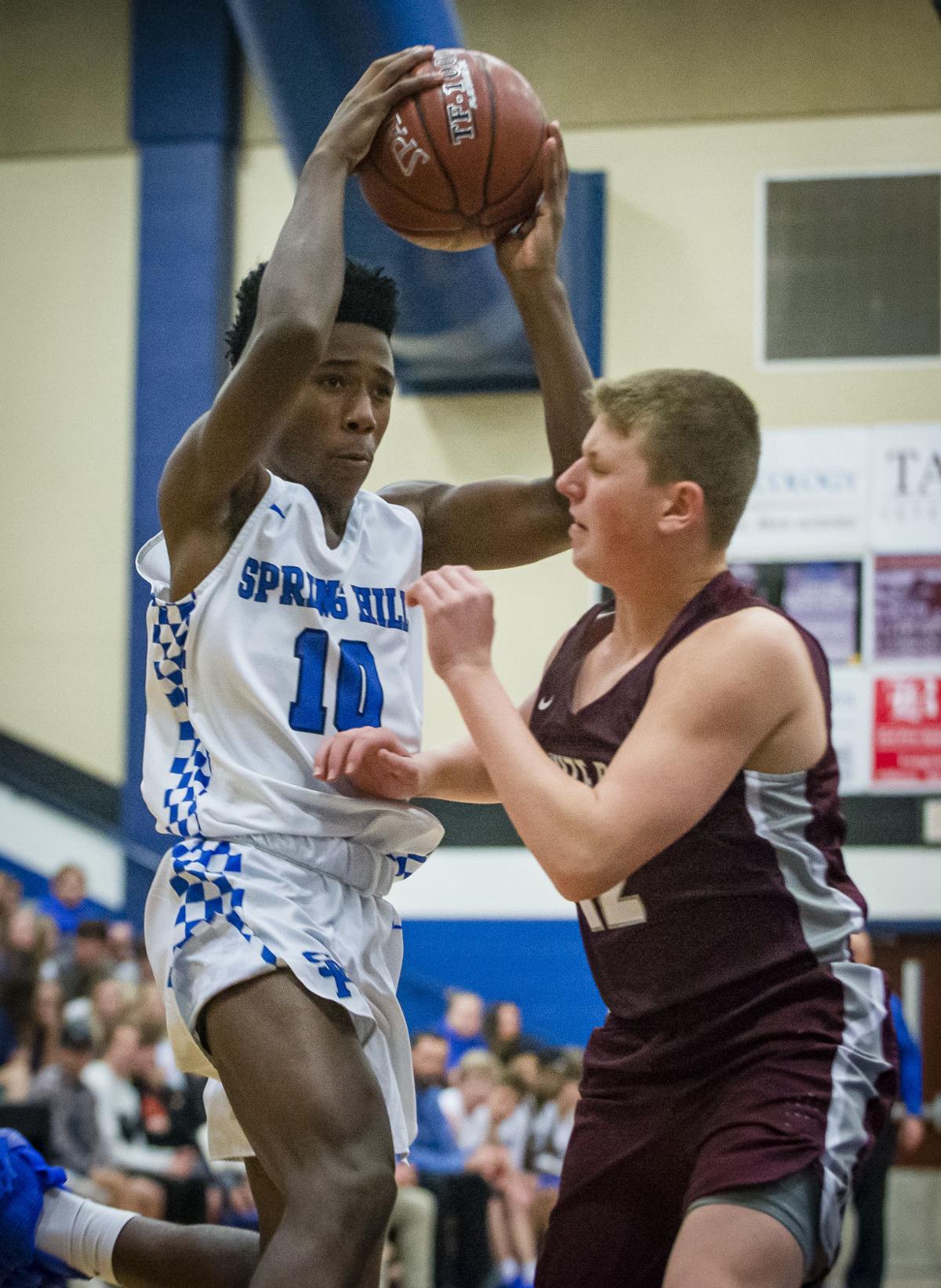 Spring Hill’s Curtis Crowe draws a foul as he takes a shot at the basket during Tuesday’s November 26, 2019 game against White Oak. (Les Hassell/News-Journal Photo) 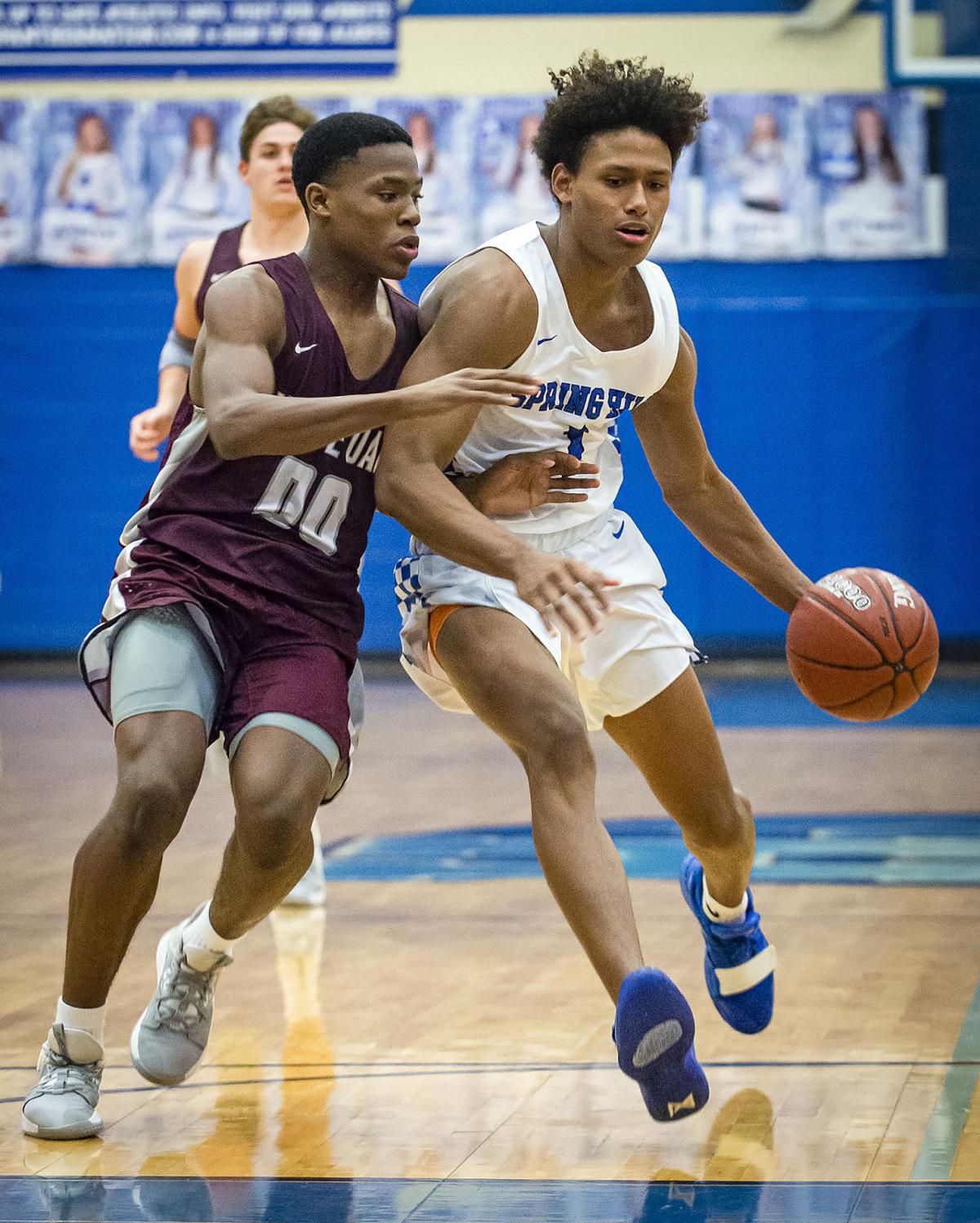 Spring Hill’s Curtis Crowe draws a foul as he takes a shot at the basket during Tuesday’s November 26, 2019 game against White Oak. (Les Hassell/News-Journal Photo)

Opening the season against a rival made the switch from the football field to the basketball court an easy transition for the Spring Hill Panthers.

After reaching the second round of the football postseason for the first time since 2004, the Panthers hit the court and opened the season with a big win.

Behind a balanced night and an explosive third quarter, Spring Hill knocked off White Oak, 69-51, on Tuesday night at Panther Gymnasium.

All five of Spring Hill’s starters made the switch and had one practice under their belt on Monday.

“It’s awesome for my kids to come out here and compete and compete hard,” Spring Hill head coach Tim Ender said. “To play against White Oak, it’s a game they look forward to every year and it’s a great battle.

“It didn’t take much to make the switch coming into tonight. They really enjoyed themselves during football season and now they’re ready to compete on the court.”

Aaron Collier turned in a big first-half for the Panthers as they knocked the rust off, nearly recording a double-double with a number of putbacks down low. He completed the feat early in the season half and led with 15-points and 12 rebounds for the Panthers, who trailed 18-12 after the first quarter and 31-29 at halftime.

It must’ve been a big halftime speech from Ender as the Panthers came out in the third quarter and outscored White Oak (0-2), 20-3.

“We had to pick up the intensity,” Ender said. “We weren’t battling hard enough in the first half.”

Sophomore Jay Rockwell finished with 12 points and nine rebounds for the Panthers, who out-shot the Roughnecks 65-47 overall and led on rebounds, 39-22.

It was a balanced night scoring-wise for White Oak, who had five players with at least six points, led by nine from Landon Anderson and Gavin Badil. Adrian Mumphrey followed with eight.

Anderson had three of White Oak’s seven 3-pointers. The Roughnecks shot 7-of-22 from beyond the arc while Spring Hill went 3-of-19 but finished 26-of-46 from 2-point range.

Anderson connected on his first three off an assist from Mumphrey to put White Oak up six, 16-10, a margin they carried into the second quarter.

Mumphrey had a pair of buckets early in the second quarter to stretch White Oak’s lead to a game-high nine. Collier the had his second of four first-half putbacks, including back-to-back offensive boards, as Spring Hill chipped into the lead.

Curtis Crowe found Collier down low and Rockwell went coast-to-coast off a rebound to make it a two-point game, 31-29, at halftime.

Then the Panthers went off.

Milam had six points, Jones connected from deep and Spring Hill took advantage of six turnovers and 1-of-8 shooting overall in a dominant third quarter. Milam had back-to-back putbacks around a Crowe steal for a 49-34 Spring Hill lead.

Crowe then went bucket-to-bucket to give Spring Hill a game-high 57-37 lead with 5:50 left.

Anderson and the Roughnecks then cut into the lead with three-straight from deep before Panthers closed out the win at the free-throw line.

The Lady Panthers cranked up the intensity in the second half as well to open action on Tuesday, pulling away from a one-point lead at halftime for a 41-28 win over Waskom.

J’Dee Stovall went 8-for-10 from the free-throw line and Ashlee Blake had a game-high 17 points for the Lady Panthers, who move to 5-3 on the season.

Stovall finished with 10 points overall for Spring Hill, who shot 22 times from the stripe in the second half. Stovall and Zailey McGee led with nine rebounds, where the Lady Panthers had a 42-32 advantage overall. McGee, a sophomore, chipped in six points.

Peyton Borens had four steals as both teams committed 21 turnovers with Spring Hill coming away with eight steals in the second half.

For Waskom, Skyie Middlebrook led with 10 points and Daejhunae Feaster six for the Lady Wildcats, who drop to 2-3. Destiny Beaty and Maria Cabrera had six rebounds and Makayla Beaty had two assists and three steals.