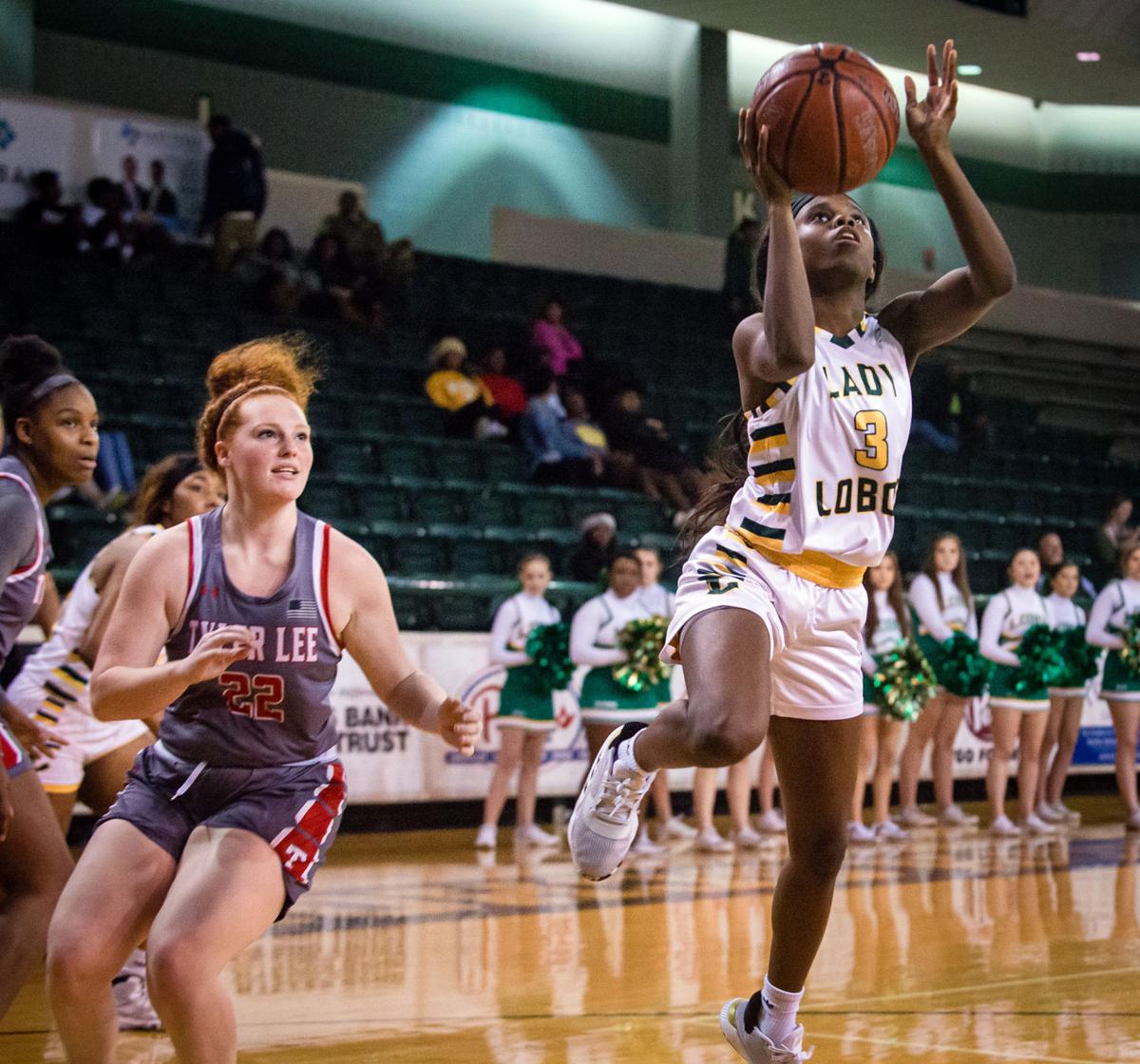 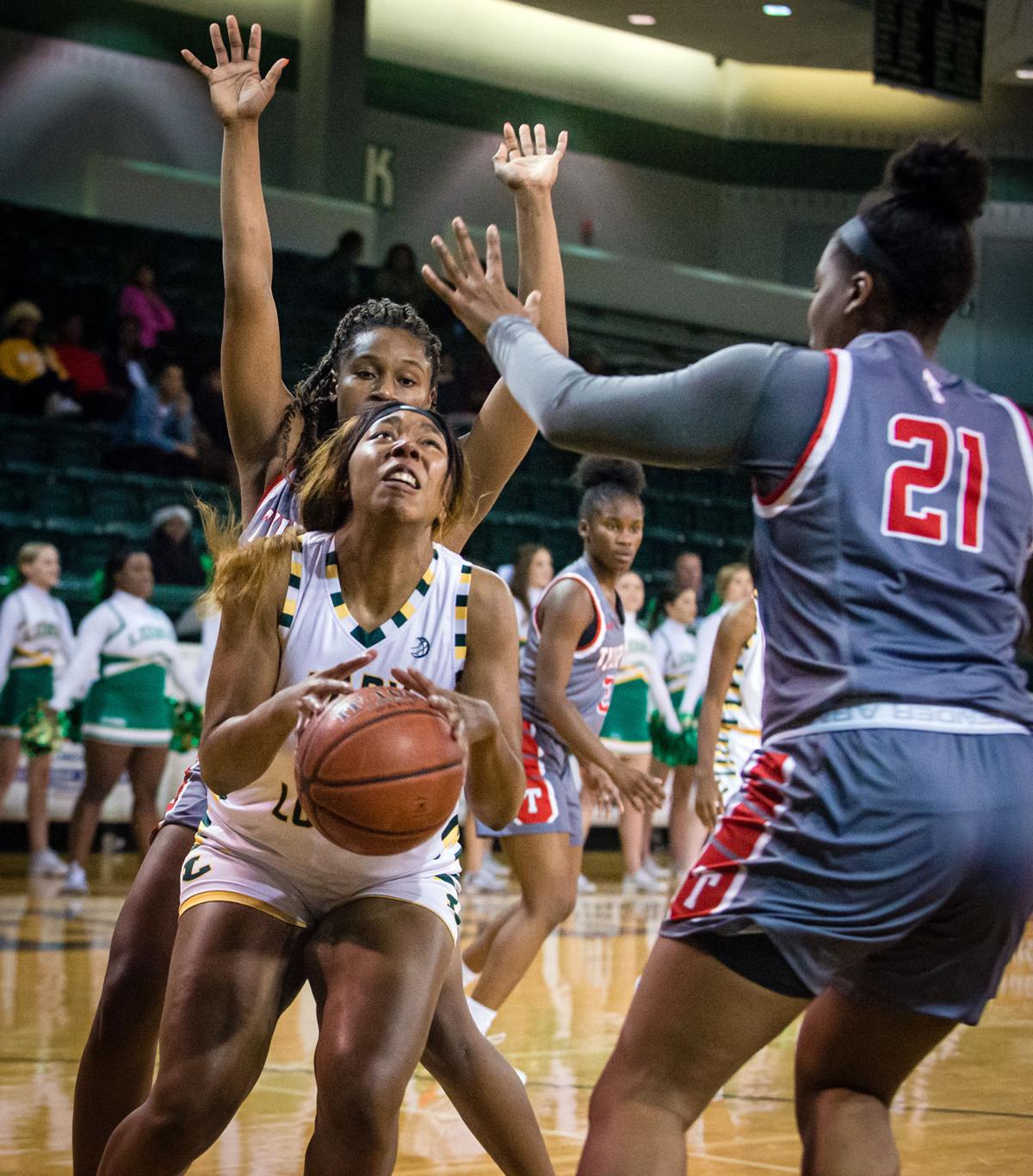 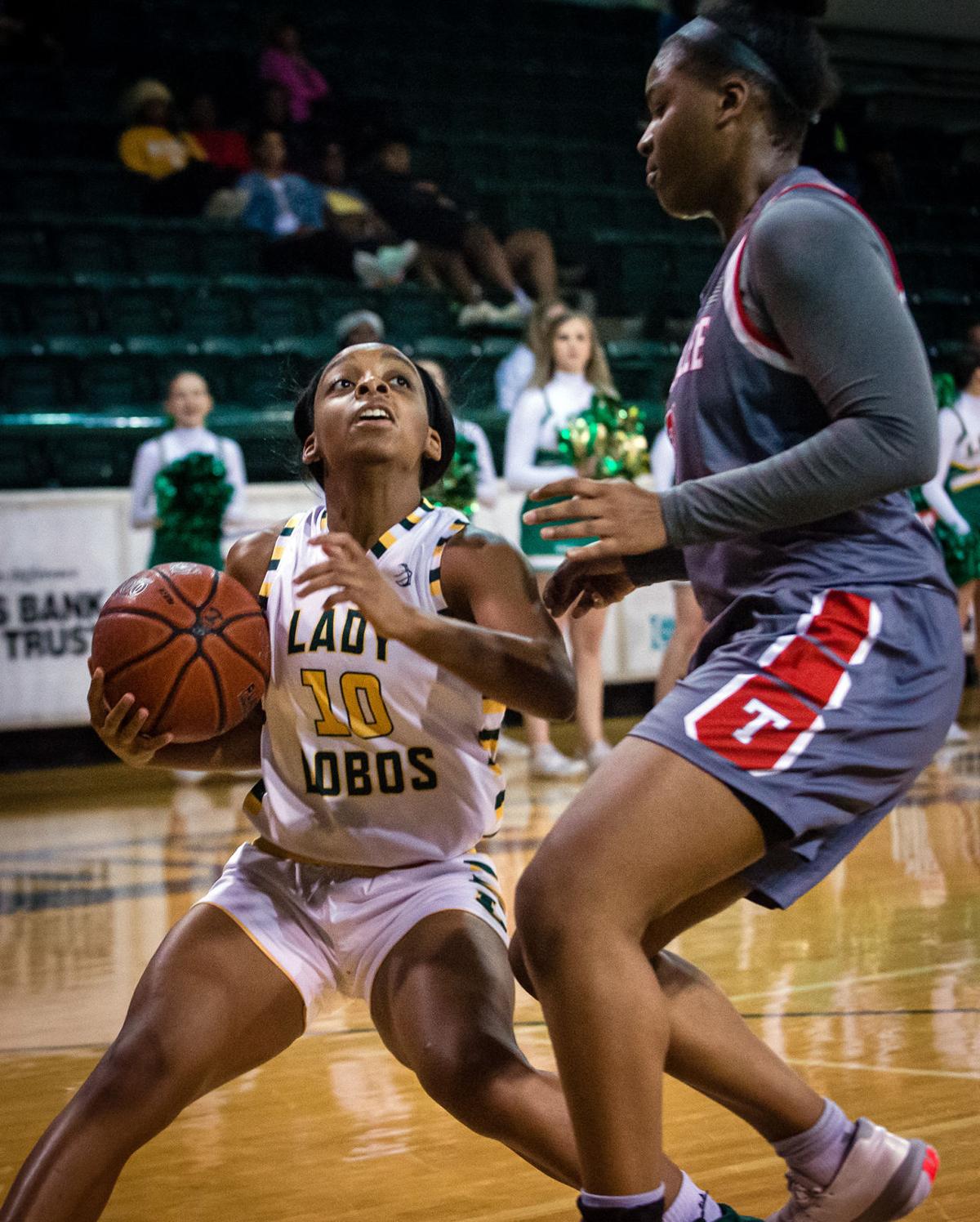 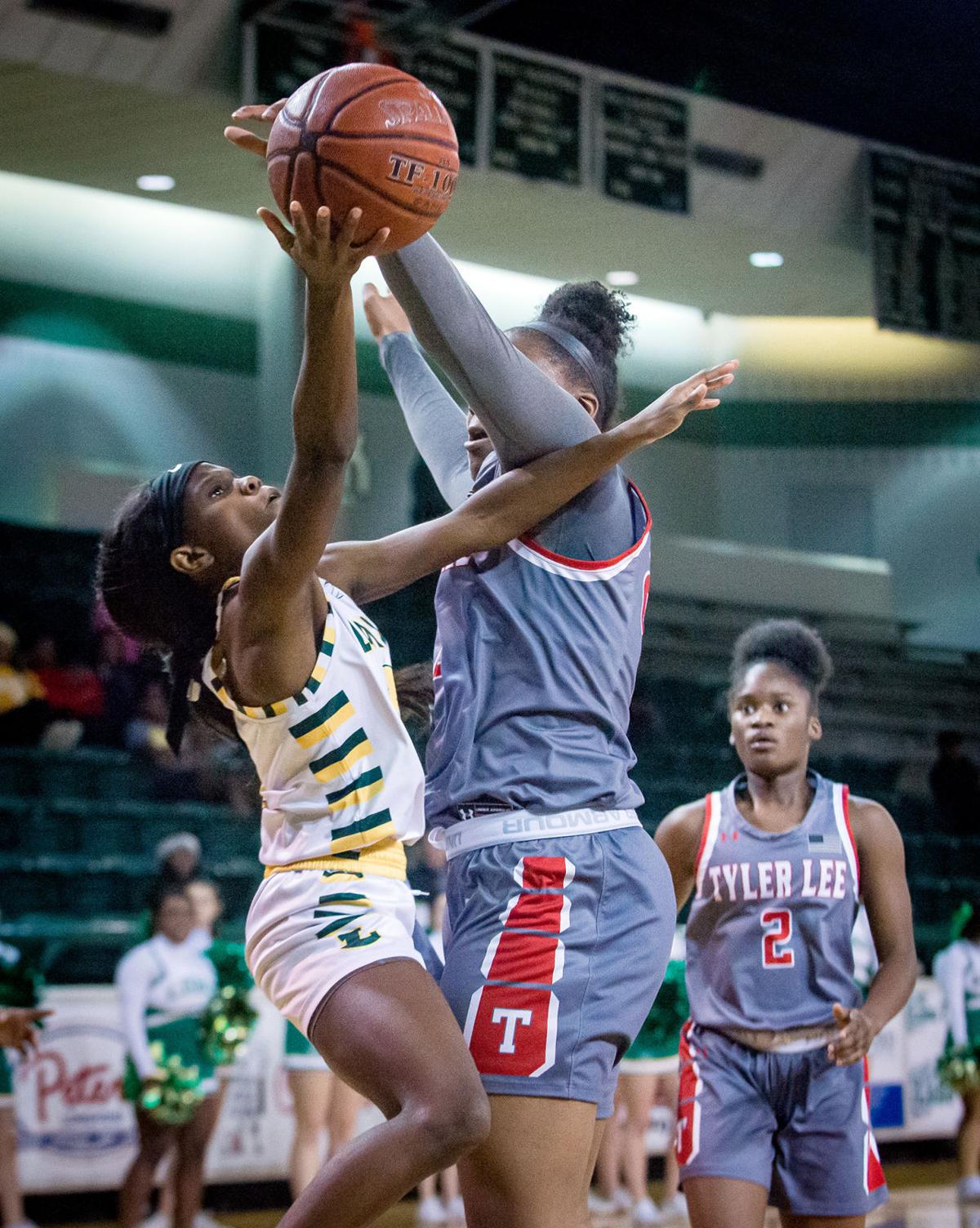 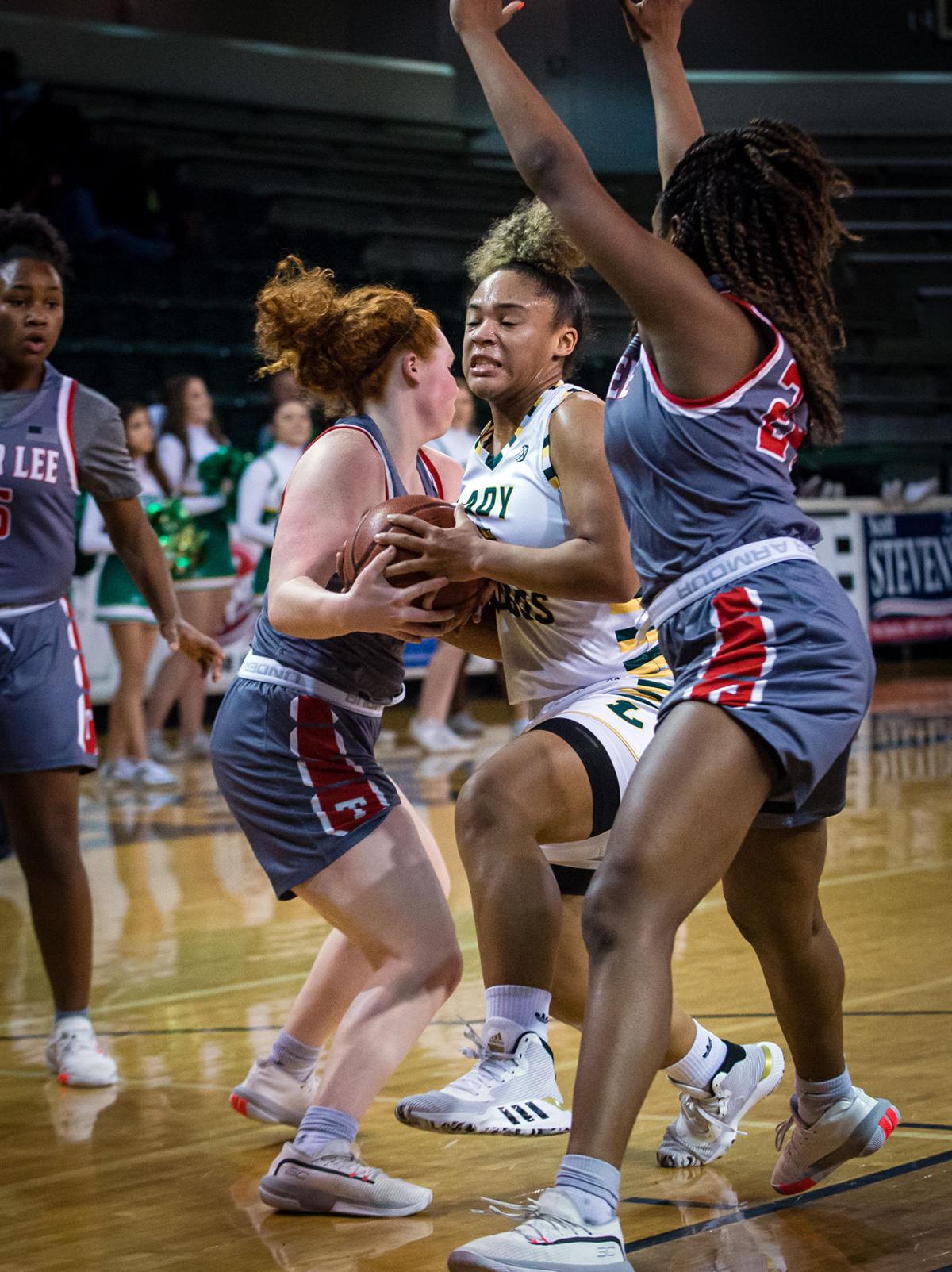 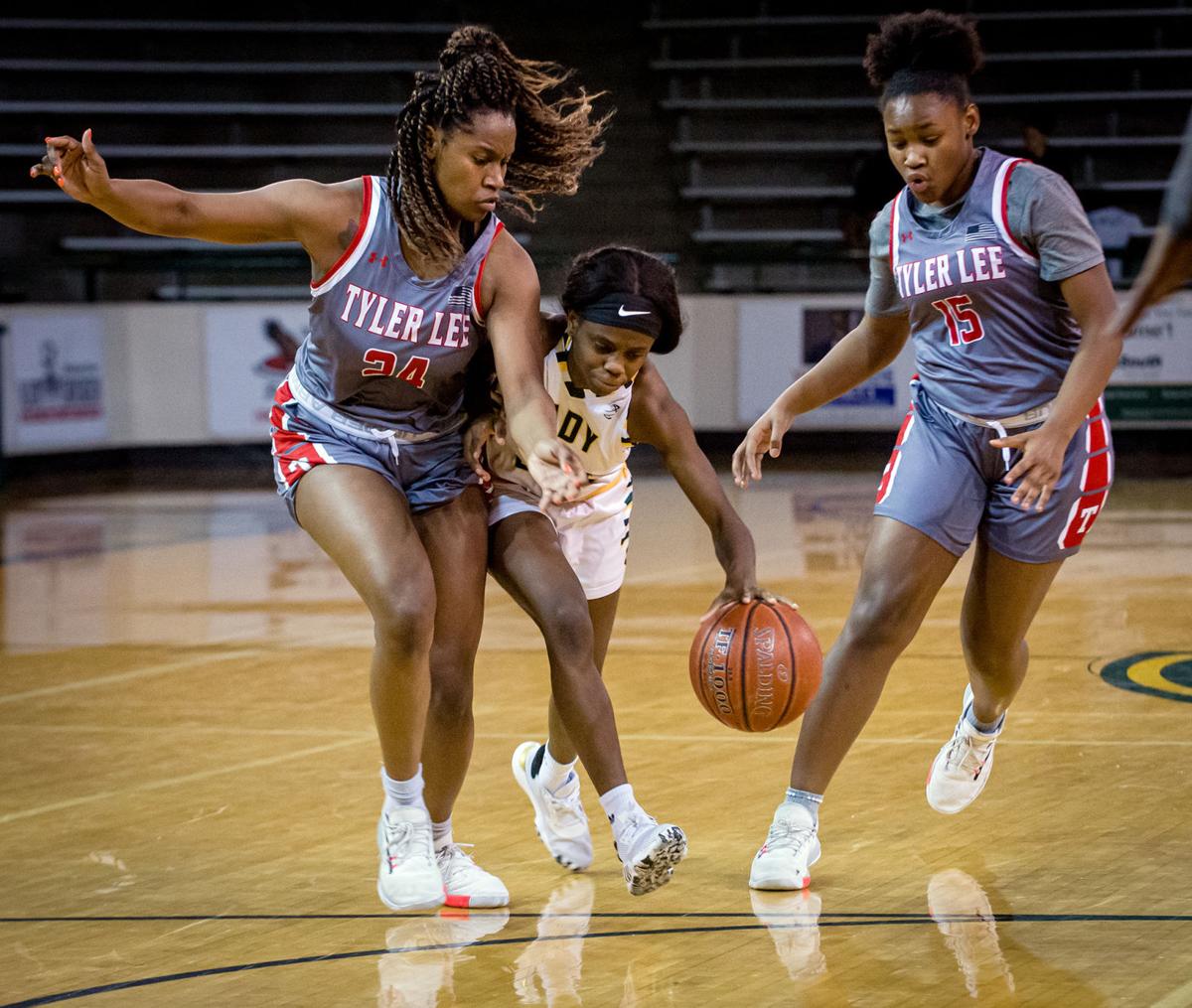 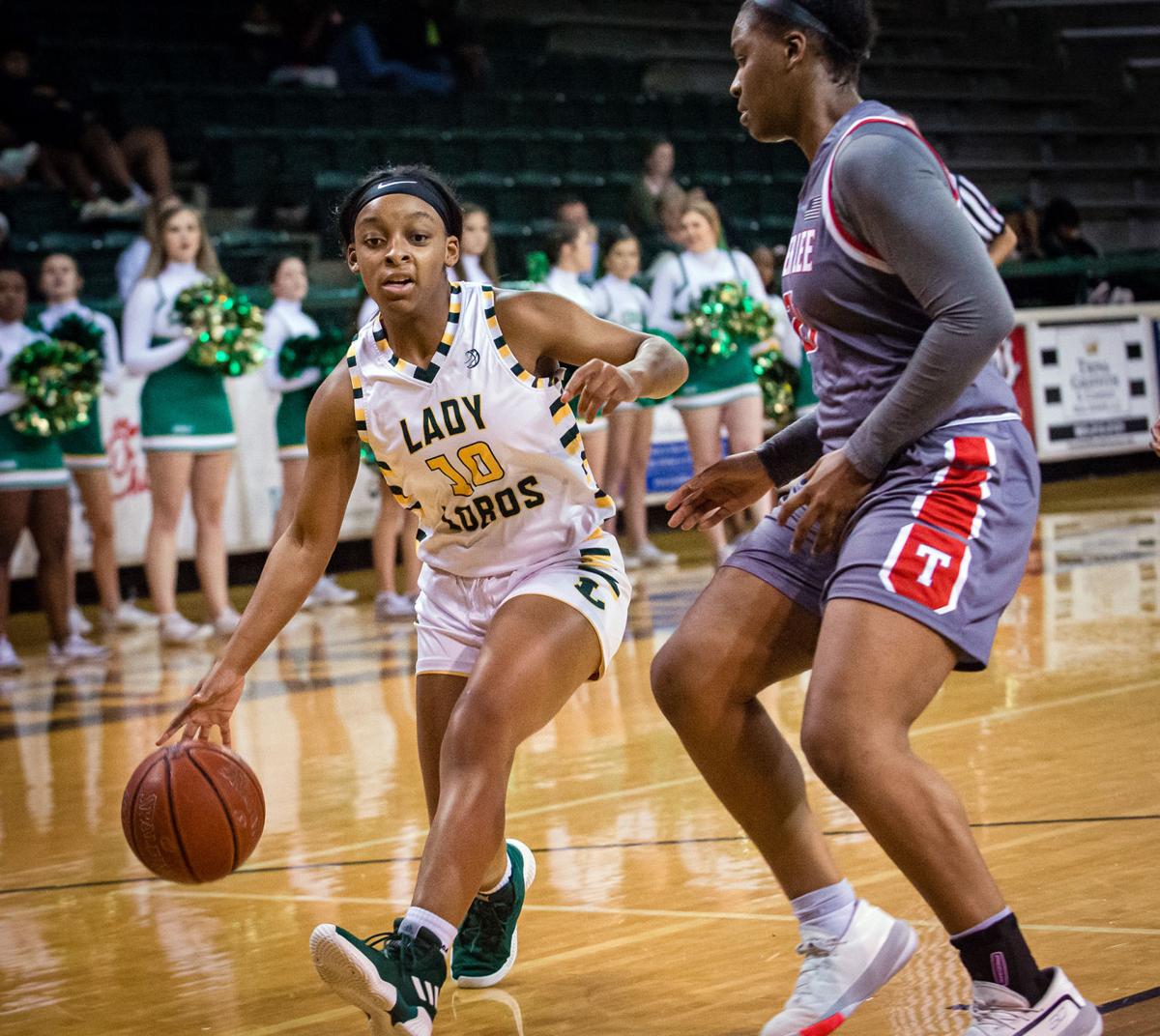 Longview’s Jordan McLain brings the ball down the court during Tuesday’s game against Tyler Lee. 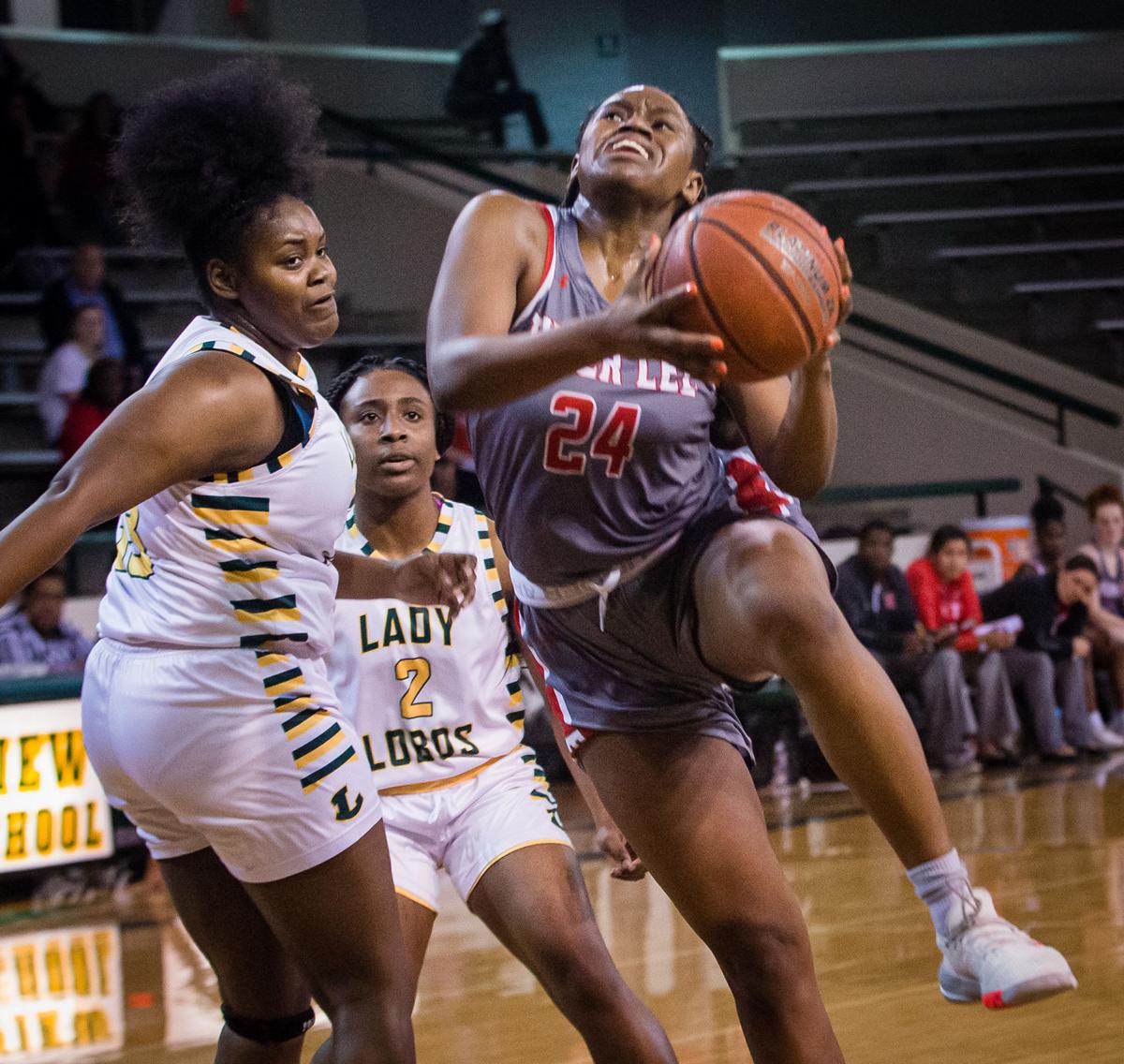 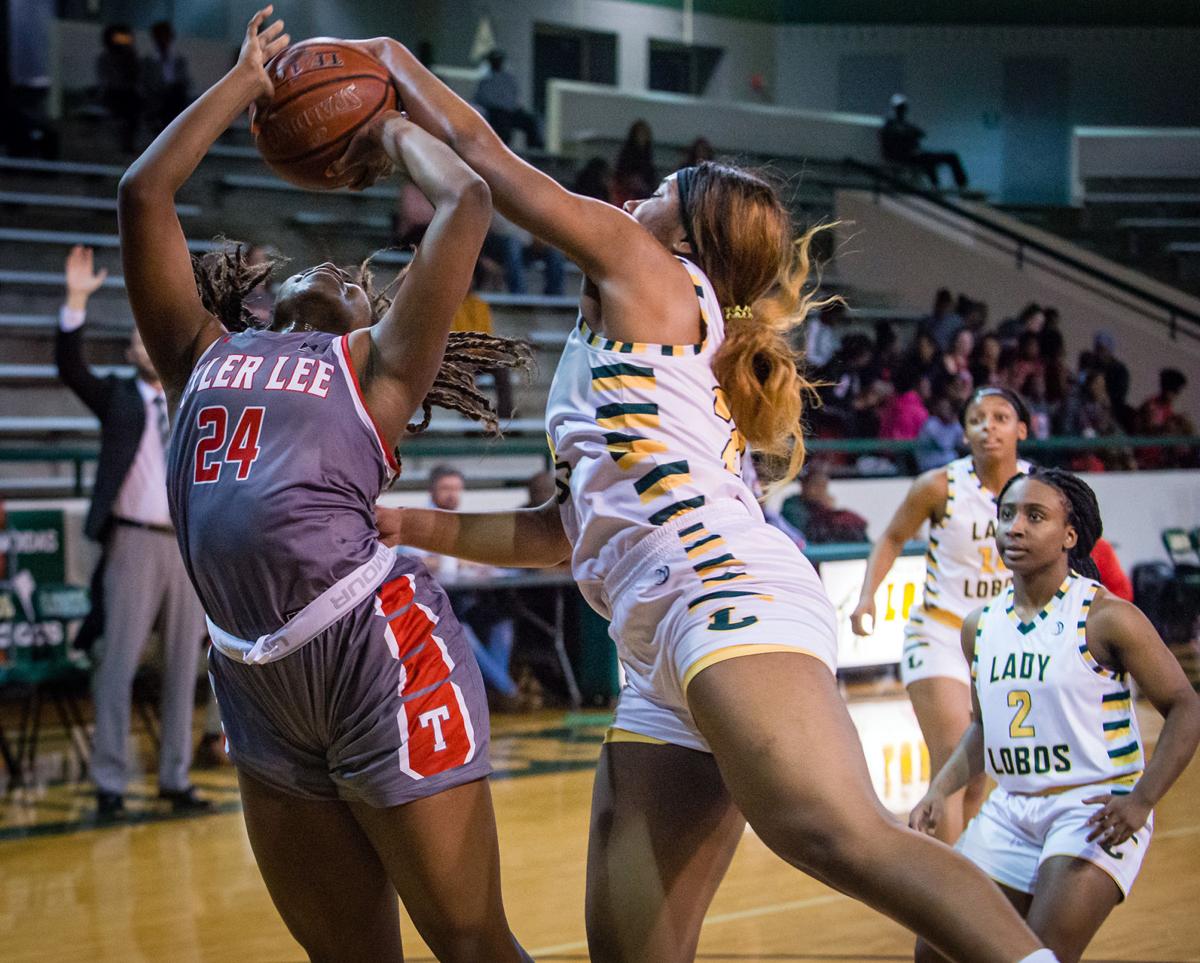 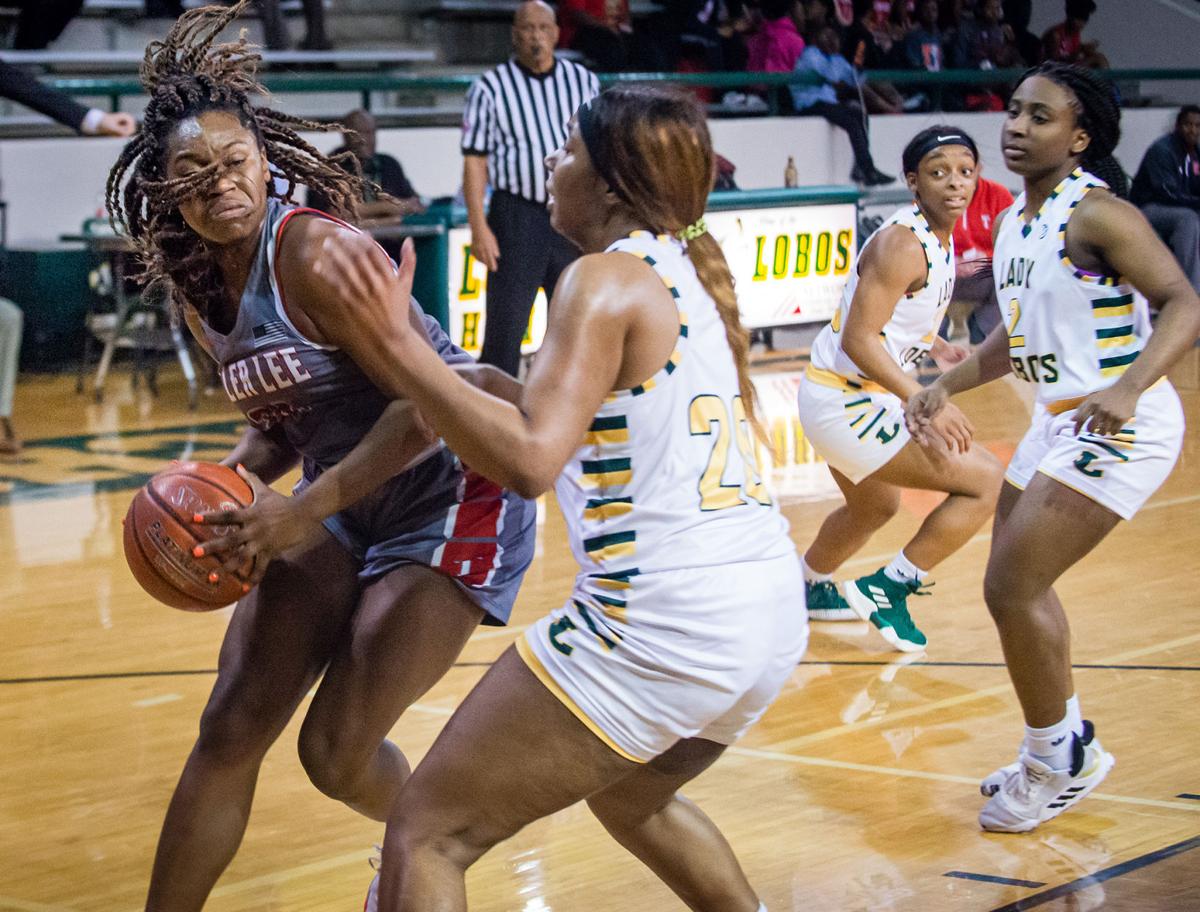 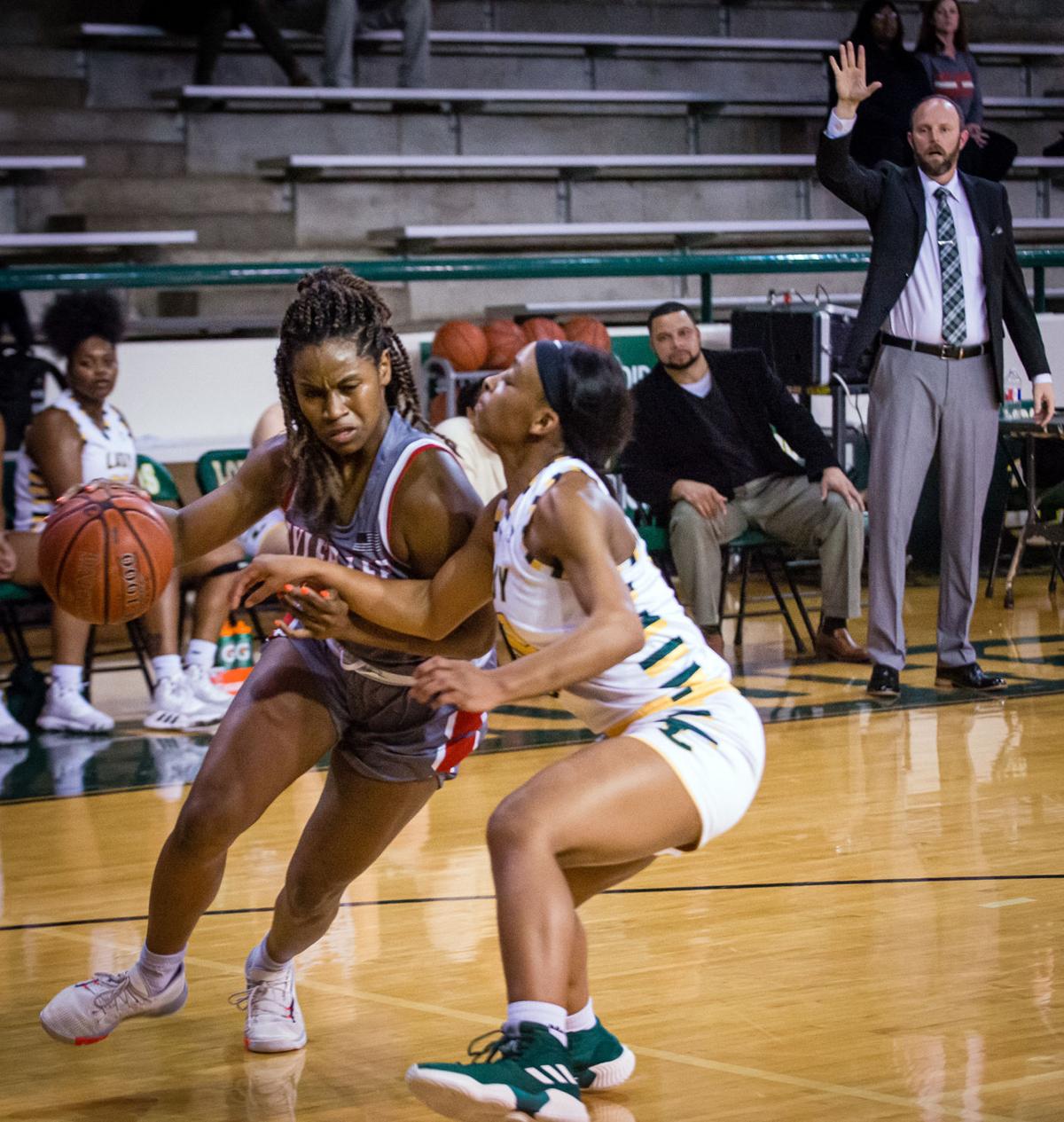 Longview’s Jordan McLain brings the ball down the court during Tuesday’s game against Tyler Lee.

Longview was able to cling to a lead throughout the first half.

In the second half, however, Alyssia Thorne took over for Tyler Lee.

Thorne dropped eight points in a 16-point third quarter for the Lady Raiders, who bounced back from their first District 11-6A loss with a 37-28 win over the Lady Lobos on Tuesday at Lobo Coliseum.

Lee, who fell to Rockwall this past weekend, moves to 19-6 overall on the season and 4-1. Longview, whose skid hits seven games, including four-straight district contests, now sits at 1-3 in 11-6A.

Thorne finished with a game-high 21 points for the Lady Raiders, who tied things up four times before taking the lead for good midway through the third quarter. The senior added six rebounds and two assists.

TCU commit Aaliyah Morgan, who on Tuesday was named and McDonald’s All-American nominee, followed with 10 points, six coming in the third quarter where the Lady Raiders outscored Longview, 16-4. She added a team-high seven rebounds.

For Longview in the loss, Meshia Shead led with nine points, followed by seven from Madison Pippins, who added five assists. Miah Colbert had five points and seven rebounds for the Lady Lobos, who drop to 10-14 overall.

Lee shot 50 percent inside the arc and the Lady Lobos went 33 percent.

Ten of the total 12 points came from the free-throw line in the second quarter, which included a 2:55 scoring drought both ways. The Lady Lobos grabbed the lead with 1:29 left in the first quarter and built a five-point lead.

Lee tied things up at 12-all early in the second on a free throw on the only bucket of the quarter and the Lady Lobos went 6-of-10 from the stripe the rest of the way, including a pair from Pippins for an 18-15 Longview lead at halftime.

Morgan had an assist from Thorne, Kei’Azia Brice answered for Longview off an assist from Pippins and Thorne followed with a putback for a 20-20 tie.

The Lady Raider duo finished with nine of 11 points in an 11-2 run from there, including a dagger three from Thorne with 2:15 left. Lee took a 31-22 lead into the fourth quarter.

Threes from Jordan McClain and Shead cut the deficit to seven points but the Lady Lobos, hampered by 14 turnovers, went cold in the final three minutes of action.

Longview closes out the first run through 11-6A at Mesquite on Friday while Lee hosts Mesquite Horn.