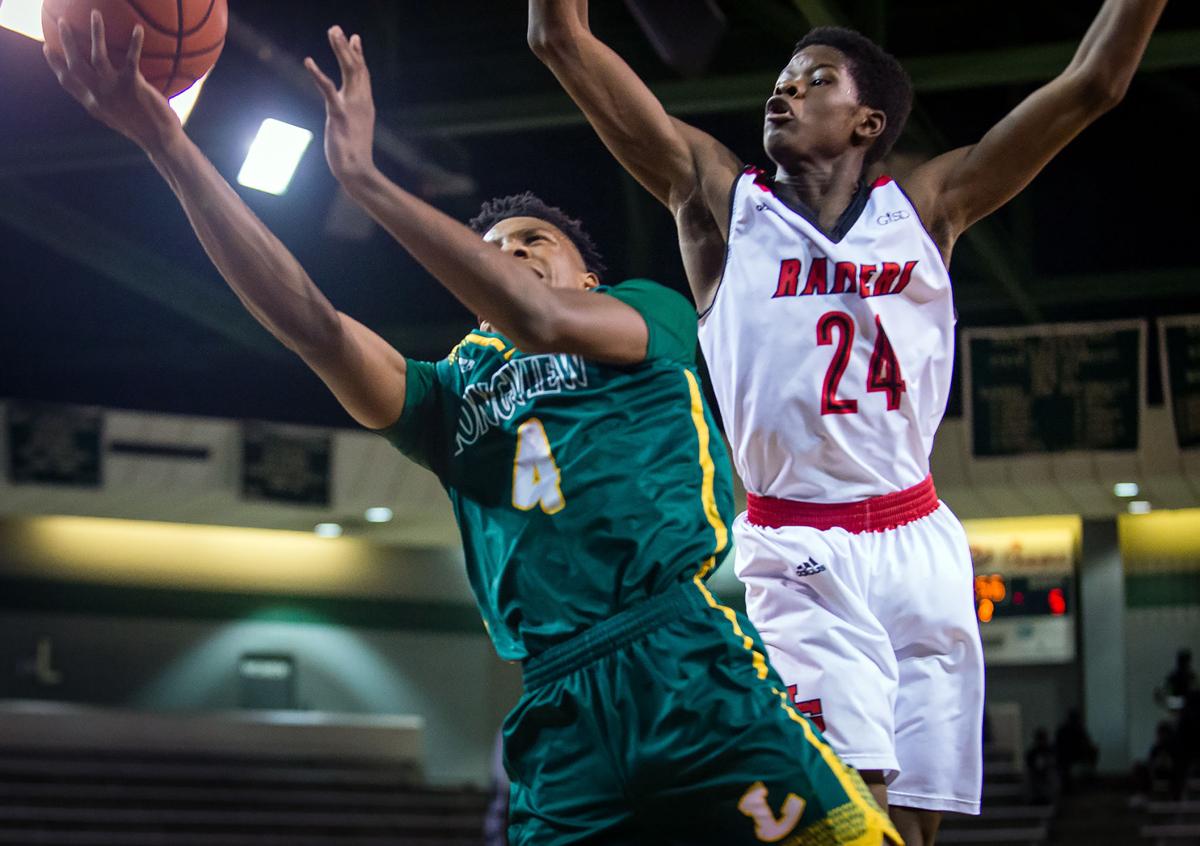 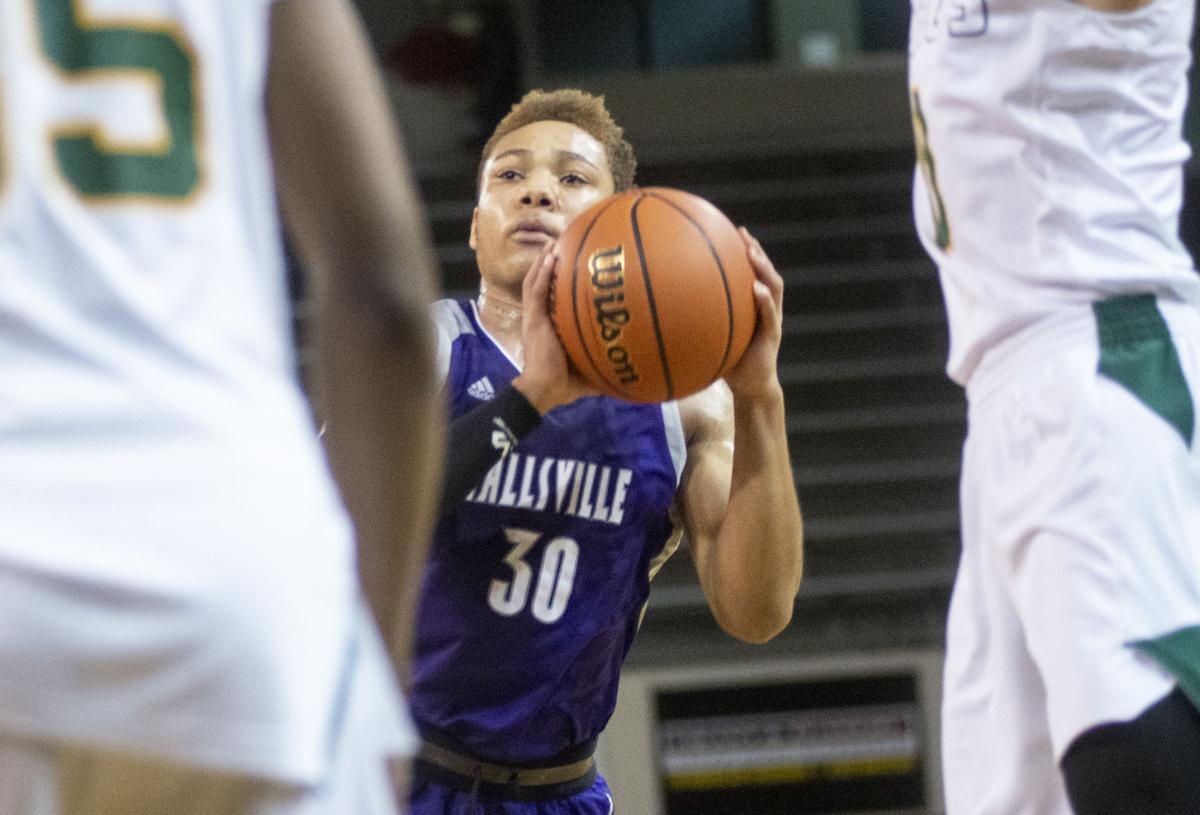 Benjamin Samples makes a move to the basket for Hallsville in a game against Longview.

Benjamin Samples makes a move to the basket for Hallsville in a game against Longview.

You can count on: “The kids will compete and play hard.” - Newton

Needs work: “All new faces. Need to continue to mesh together.” - Newton

Did you know: Newton has a career coaching record of 397-235 … Hale started every game for the Lobos last season as a freshman, earning district Newcomer of the Year honors … Liebengood helped lead Trinity School of Texas to a TAPPS state championship last season, averaging 25.5 points, 7.7 rebounds, 2.9 assists and 3.2 steals per game. He scored in double figures against every public school team the Titans played, including 34 against Mineola, 28 against New Diana, 40 against DeKalb and 21 against Harmony

You can count on: “We are going to play the full 32 minutes. We play hard and will get after you.” - Shaver

Needs work: “Experience for the players coming up from JV last year. We had a great JV team, but now we will need to contribute on the varsity team.” - Shaver

You can count on: “The Bobcats hope to use strong depth and leadership as a catalyst for an exciting 2020-21 campaign. Samples and Locario provide experience as fourth-year varsity players, and Benson, Ruff, Sheffield, Trenton Smith and Zachar Florence also have a year of varsity experience. Luke Cheatham, Jake Hall and Conner Smith also saw limited varsity action last season and look ready to be solid contributors.” - Walker

Needs work: “We must rebound well as a team.” - Walker

You can count on: “We have depth and will play hard.” - Carson

Did you know: Carson has 776 career coaching wins … The Mavericks shared the district championship last season

Did you know: The Tigers will have no returning seniors or starters from last year's varsity squad until the end of football season ... Texas High defeated current district member Marshall in bi-district play last season, and then lost to Lancaster in the area playoffs

You can count on: “We will play hard, smart defense and should be able to shoot the ball from outside pretty well.” - Lewis

You can count on: “We have three returning starters, and should be a little more deep coming off the bench.” - Coleman

You can count on: “Our guys will play hard and play fast.” - Francis

Did you know: Henderson went 11-1 in district play last season and won its first outright district title in more than 30 years

You can count on: “Young team with strong offensive fundamentals and perimeter shooting.” - Grotemat

Needs work: “Young team must learn to defend at a high level. Preseason injuries are also a concern.” - Grotemat

Did you know: Grotemat is 221-164 as a head coach, including a 53-44 mark at Lindale … Assistant coach Spencer Terry was named the TABC Assistant Coach of the Year last season

You can count on: “We have a lot of experience coming back from back-to-back district championship teams.” - Tucker

Needs work: “Due to our always-late start because of our late runs in football, we have a short time to develop team chemistry. From a coaching standpoint, we have a very short time to figure out what rotations work the best. That is always the most challenging part.” - Tucker

Did you know: Every player on the Bulldog rosters also plays football

You can count on: “My team will play extremely hard and with a lot of senior leadership that will be needed throughout the season.” - Bradley

Needs work: “We need to focus on us and to have each other’s backs no matter what.” - Bradley

Did you know: Owen McCown and Aiden McCown are the sons of former NFL quarterback Josh McCown

You can count on: “The Riders will hang their hat on tough, solid team defense.” - Harrison

Needs work: “Although we will have several seniors, we will need to establish team unity.” - Harrison

You can count on: “We will play hard and defend.” - Johnson

Needs work: “Shooting, because many play football and will take some time to get going. But we will be pretty good this year.” - Johnson

You can count on: “We will play hard and grow on both ends of the floor as the season progresses.” - Bedford

Did you know: The Pirates lost to North Lamar in a tiebreaker for the fourth playoff spot in the district last season

You can count on: "Our team will hang their hats on being very active and aggressive on defense as well as getting good shots and being efficient on offense." Girley

Did you know: Liberty-Eylau's gymnasium is called the Radar Dome after former superintendent Don Radar

Did you know: Pobuda was averaging 10 points and 10 rebounds per game before suffering an ankle injury in the third district game and missing the next nine games … The Cardinals were 9-5 in district play last season

You can count on: “We have an experienced varsity team with eight players who logged varsity minutes last year, and four returning starters. We have solid inside and outside scoring ability. My guys will play fundamental basketball.” - Cloud

Needs work: “We must fully commit to playing a tougher brand of basketball on both ends of the court.” - Cloud

Did you know: Cloud, starting his fifth year at White Oak, has a career coaching record of 96-88

You can count on: “I think our execution on offense and defense will be at a very high level since these guys are getting into year two of having the same system.” - Herring

Needs work: “We have a lot of young guys playing key roles on varsity, so it will take time for them to adjust from middle school basksetball.” - Herring

Did you know: Herring is also the girl’s varsity basketball coach at New Diana

You can count on: “Defense will keep us in games.” - Lopez

You can count on: “We will be athletic and play hard. We will also be in the second year of the system, and the kids will be more comfortable.” - Hlavaty

Needs work: “Offense. We are lostover 60% of our points from last season due to graduation. We will be sophomore heavy with those guys expected to contribute even more to the scoring output this season.” Hlavaty

Did you know: West Rusk faced – and defeated – a team from Australia last season

You can count on: “We will show up every day and work to get better. They will play hard at all times and get after people on defense.” - Waldrop

Needs work: “We must get better on the defensive glass.” - Waldrop

Did you know: Waskom had won nine total games in the three previous seasons before winning 16 times last year … The Wildcats lost to Arp – a district rival this year – in the opening round of last season’s playoffs

You can count on: “I think we will be hungrier this year. Last year we were young and coming off a regional tournament as freshmen. I think the loss to Troup (regional quarterfinals) really hurt. Nothing like pain for motivation.” - Carr

Needs work: “Almost all of our kids are football players, and I believe we will be getting a late start. They are having a good season in football.” - Carr

Did you know: Tatum is the only school in the United States with two players in the NHSF record book top 10 3-point shooters – Jaime Bradley with 171 and Robbie Rockwell with 168

You can count on: “Playing hard and hustle.” - Whitaker

Needs work: “We don’t have a lot of size, so rebounding will be the key.” - Whitaker

Did you know: Whitaker was girls coach at Harmony for 13 years. He has also been football coach and athletic director and superintendent at Harmony before retiring and then getting back into coaching for the last five seasons

You can count on: “Experience and leadership.” - Steadman

Did you know: The team’s assistant coach is 2019 Mineola graduate Jaylon Harper

You can count on: “We will be able to shoot the ball pretty well this year.” - Dubois

Needs work: “We need to find some depth.” - Dubois

Did you know: Dubois is in his first year at Elkhart … The Elks will play six teams ranked in the preseason top 25

You can count on: “As a young team, I feel very confident we will continue to improve as the season progresses.” - Strong

Needs work: “With all of last year’s varsity players graduating, we will need some younger guys to step up and take a leadership role.” - Strong

You can count on: “The Bearcats will play tough defense every night.” - Ender

Needs work: “We will need to learn the offensive system fast.” - Ender

You can count on: “We are senior heavy. We have a few guys that have played varsity basketball since they were freshmen, so the leadership is there and they bring it every day.” - Wilson

Needs work: “We have to have a few guys step up and handle the ball better, and the shot selection needs to be a little better.” - Wilson

Did you know: Coach Wilson played basketball at Martin’s Mill

You can count on: “Most of our success depends on making it through football fully healthy. If we can do that, e will have a really good chance to complete for a playoff spot. With the hiring of coach Rigdon, we have added some desperately needed scoring with his sons, Matthew and Griffin, who were both 1A all-state performers last year. Pairing them with returning starters Brett Roland and Carlos DeLeon makes the Indians primed to make a run at a district title.” - Roland

You can count on: "An athletic team that brings the intensity." - Bunn

Needs work: "Learning a new system and how they need to play." - Bunn

Did you know: Bunn is a 2014 Beckville High School graduate

You can count on: “Tough defense.” - Powers

Did you know: The Titans finished with a 20-4 record last season and won the TAPPS Class A state championship

You can count on: “our group will be young, energetic and scrappy.” - Holland

You can count on: “We will play fast-paced basketball and will be strong defensively.” Kaunitz

Needs work: “Our boys are young and are still developing both skills and basketball IQ.” - Kaunitz