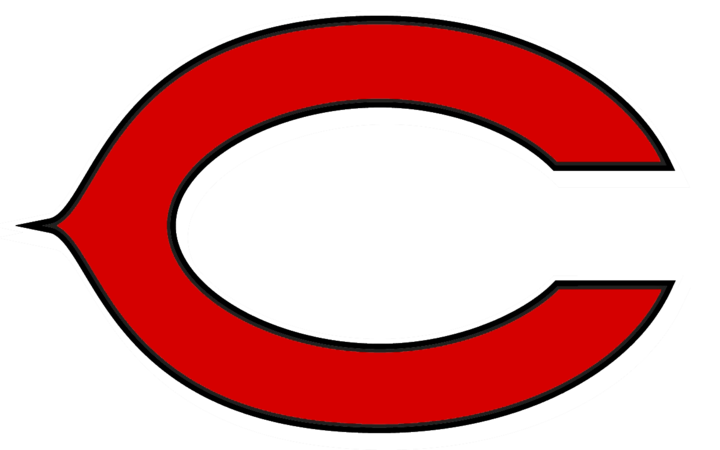 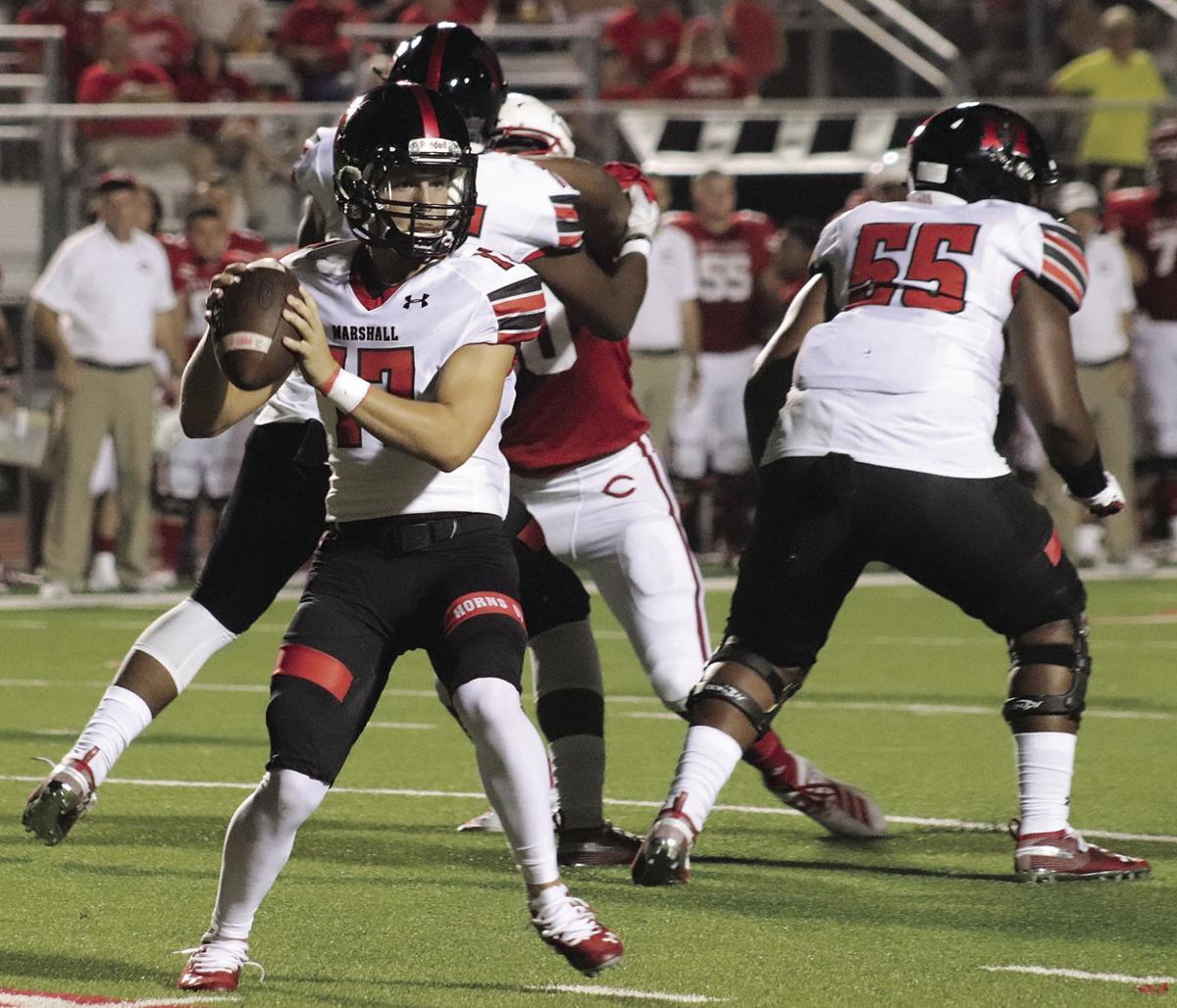 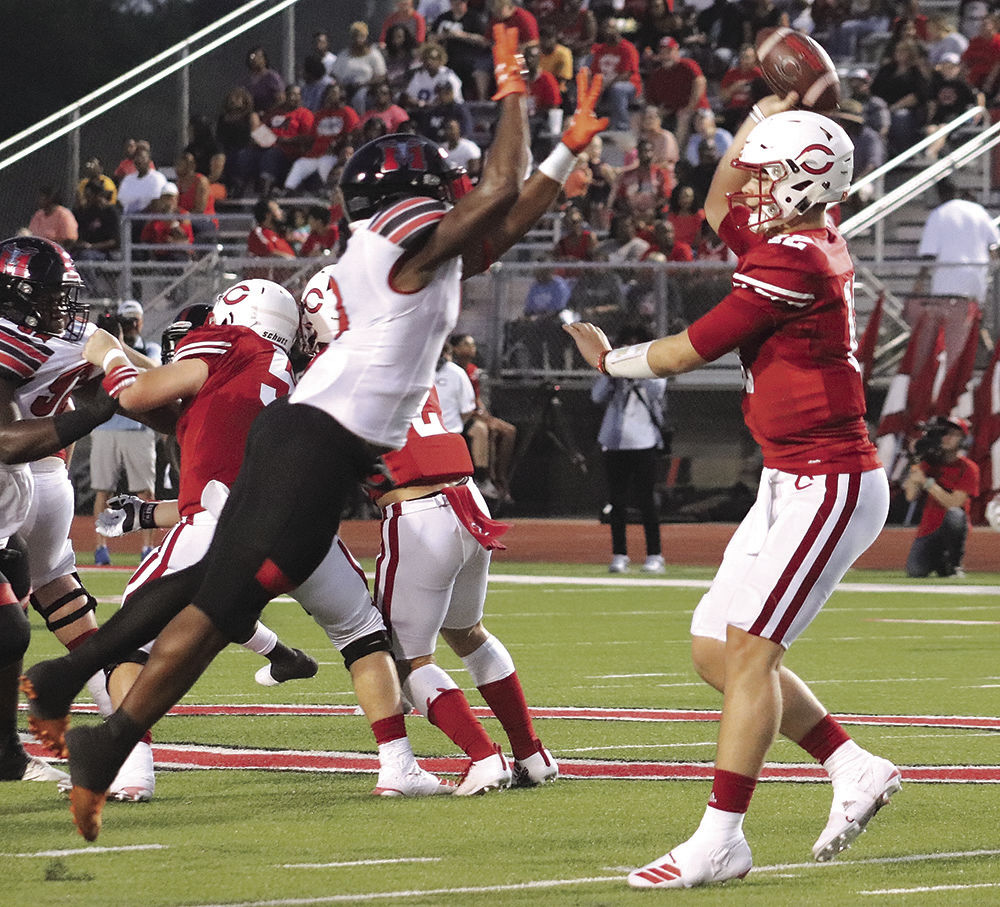 CARTHAGE — The Marshall Mavericks forced the Carthage Bulldogs to do something Friday night they hadn’t done yet in 2019 and rarely did in 2018.

They forced a punt.

But it was the only time the Bulldogs failed to get points in the first half as they turned a couple of blocked punts in the second half into touchdowns on the way to a comfortable 38-6 win in Bulldog Stadium.

Carthage, ranked No. 2 in the #bEASTTexas Fabulous 15 poll, is now 3-0 on the season and will entertain Gilmer next week. The Mavericks, who are 14th in the same poll and in danger of dropping out, falls to 0-3.

Apparently Carthage coach Scott Surratt felt a fourth-and-23 from his own 37 was a little too far to try for.

So the Bulldogs lined up in the shotgun — quarterback Kai Horton was a little deeper than usual — and he pooch kicked it. It good a good roll and ended up a 51-yarder to put the Mavericks back at their own 12.

Carthage held a slim 7-6 lead at the time thanks to a 28-yard touchdown pass to a wide-open Craig McNew on the first possession of the game.

It was the first of a 5-TD night for Horton as he was 20-29-0 for 238 yards. It was the second straight week he has thrown for five touchdowns.

The Mavs came right back with DeMarcus Williams going up and over a Bulldog defensive back to make a catch and then raced the final 20 yards for a 65-yard touchdown.

The bad snap and hold on the PAT kick may have been foreshadowing on the Marshall kicking game the rest of the night.

Carthage came back with Horton connecting with Kelvontay Dixon on a 9-yard touchdown pass where he went over two defensive back to make the catch and the score.

The Dawgs went up 17-6 at the half on a 33-yard Brennan Phillips field goal.

Carthage probably could have blocked punts the whole night, but only went for it twice.

The first time occurred midway through the third period and the Bulldogs took over at the 31. A 16-yard run by Dixon and an unsportsmanlike conduct penalty against the Mavs put the ball at the 7.

Horton hooked up with Kel Williams from there to put the Bulldogs up 24-6.

After Carthage took over at the 33, Horton went for it all on the first play, but Dixon was interfered with in the end zone.

Two play later Horton and Dixon connected from the 8.

The Mavs put together a drive that got them into the Red Zone, but a sack by Rayvon Ingram at the 20 ended the threat.

Two plays later Horton threw it as far as he could and Dixon caught it in stride for a 69-yard touchdown pass and the ballgame.