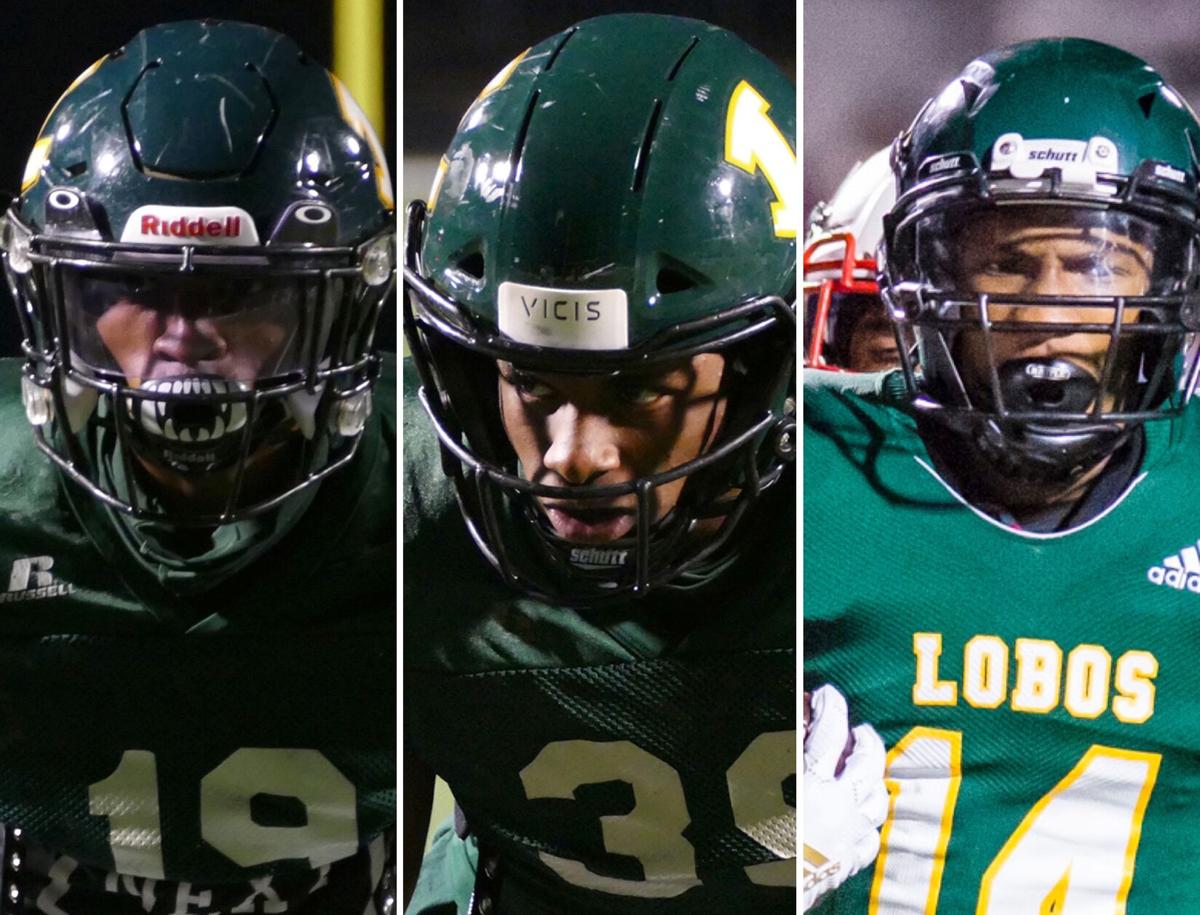 Brothers Tyree, Laqualon and Jalen Hale have come up big for the Lobos this season. 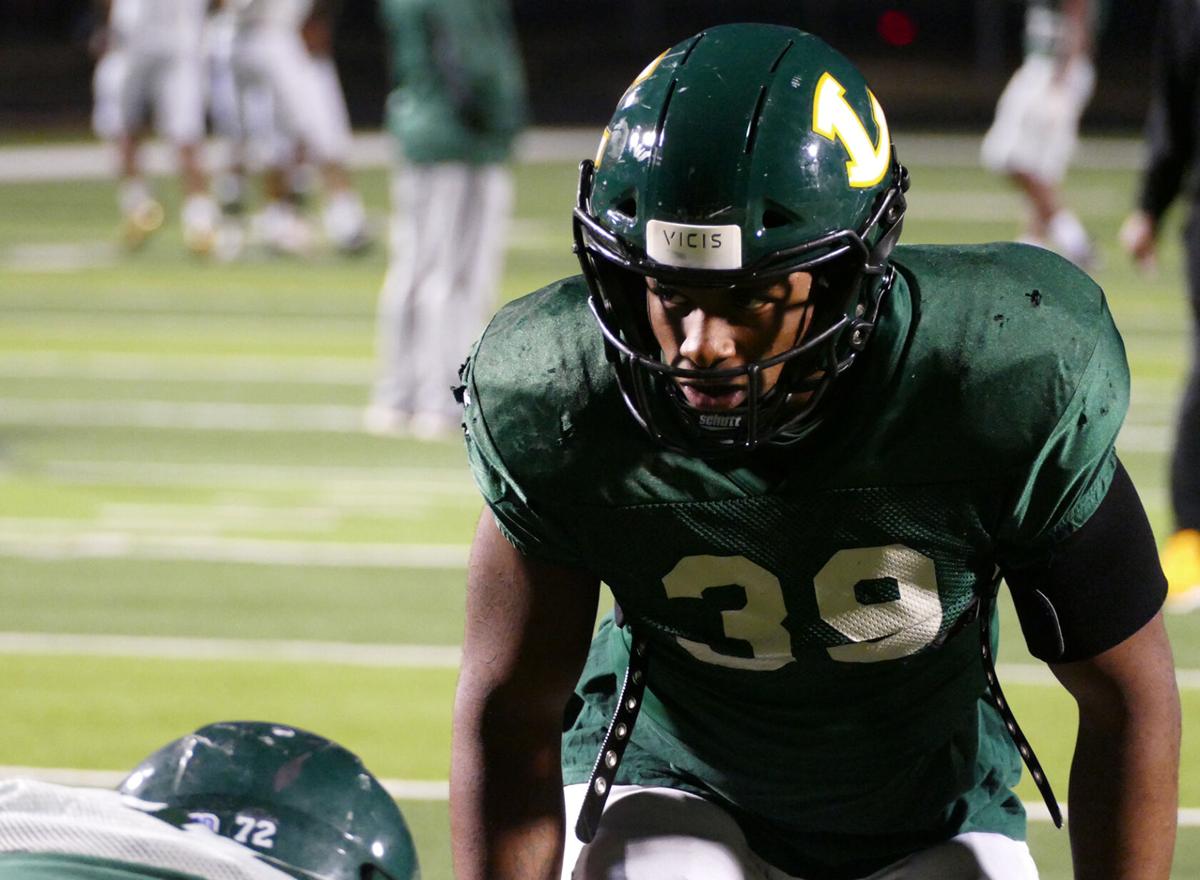 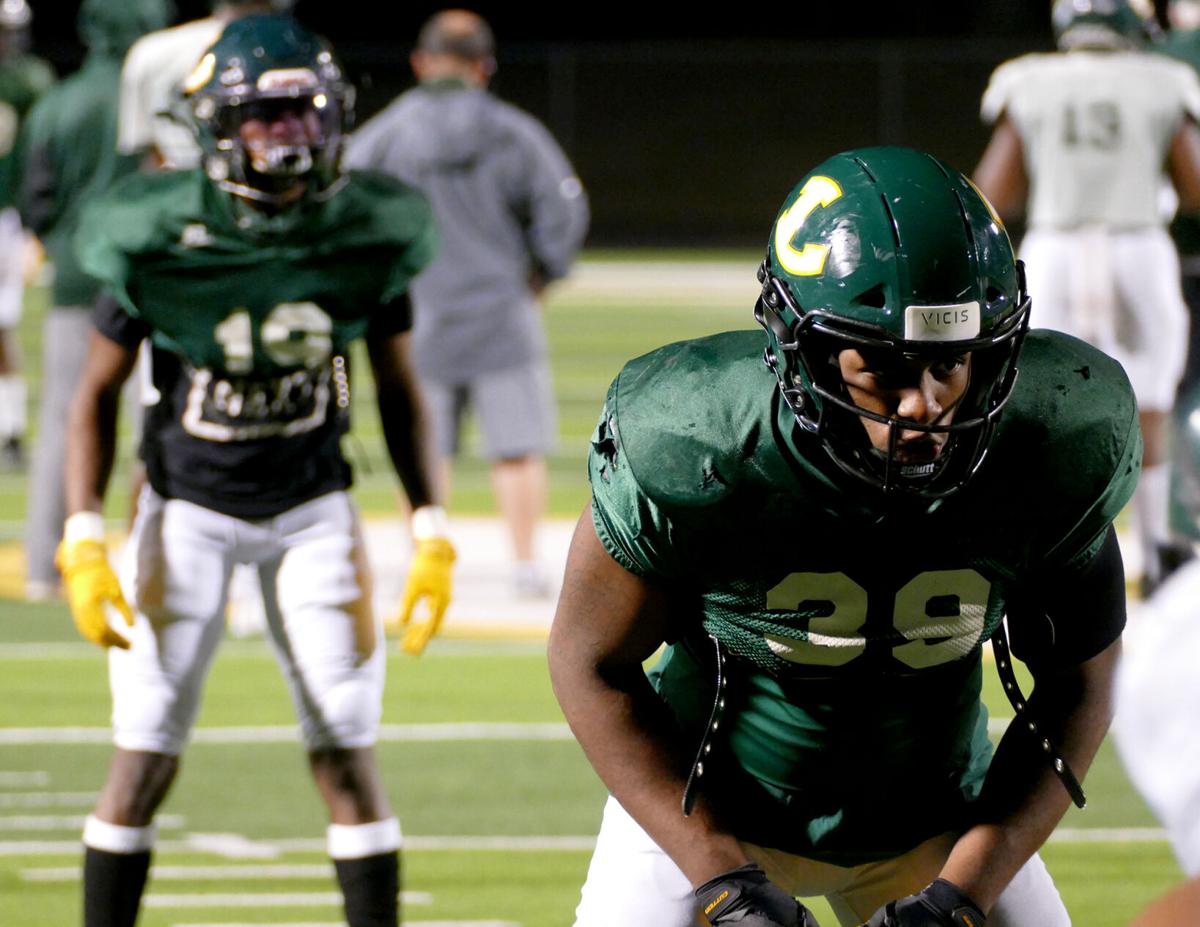 Laqualon Hale (39) and Tyree Hale line up during practice at Lobo Stadium. 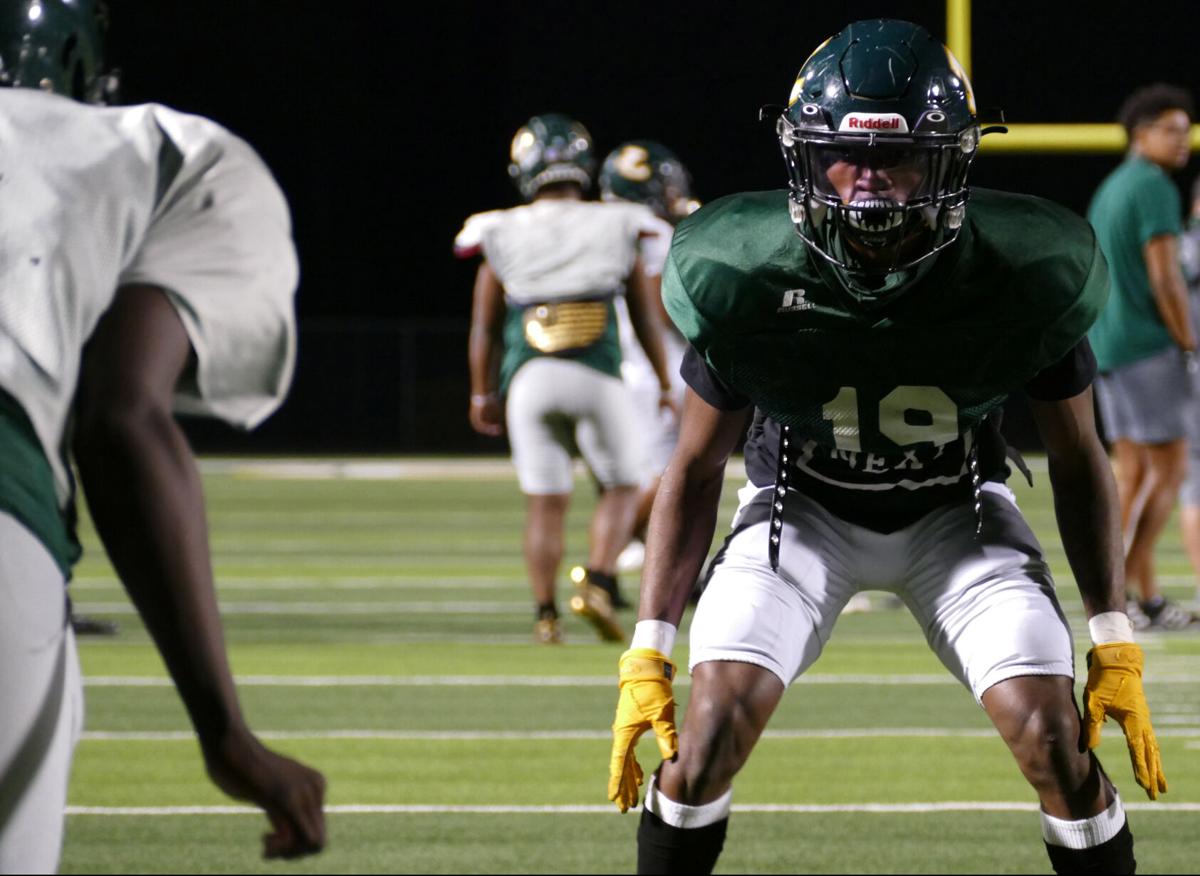 Longview safety Tyree Hale gets set before a play during practice at Lobo Stadium. 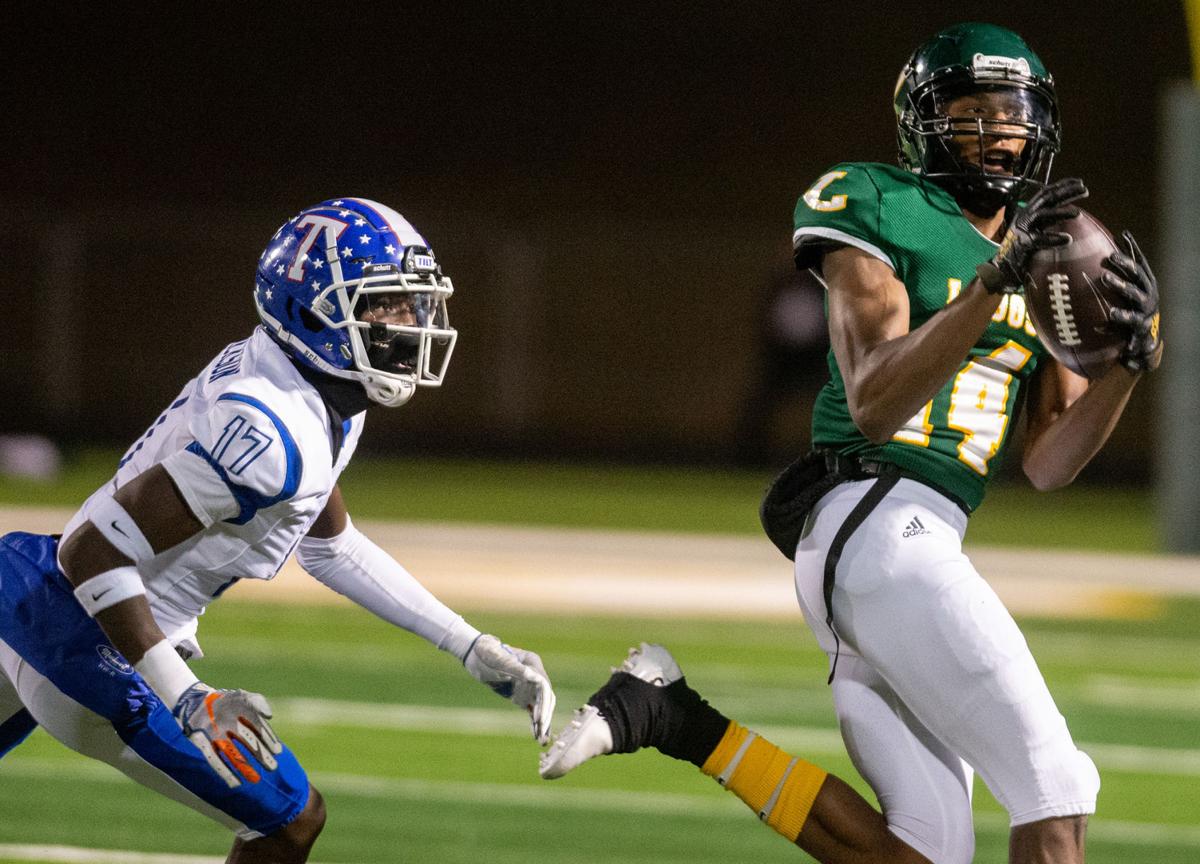 Jalen Hale makes a catch for Longview, on Friday November 15, 2019, during their 6A bi-district playoff game with Temple at Lobo Stadium. (Michael Cavazos/News-Journal Photo) 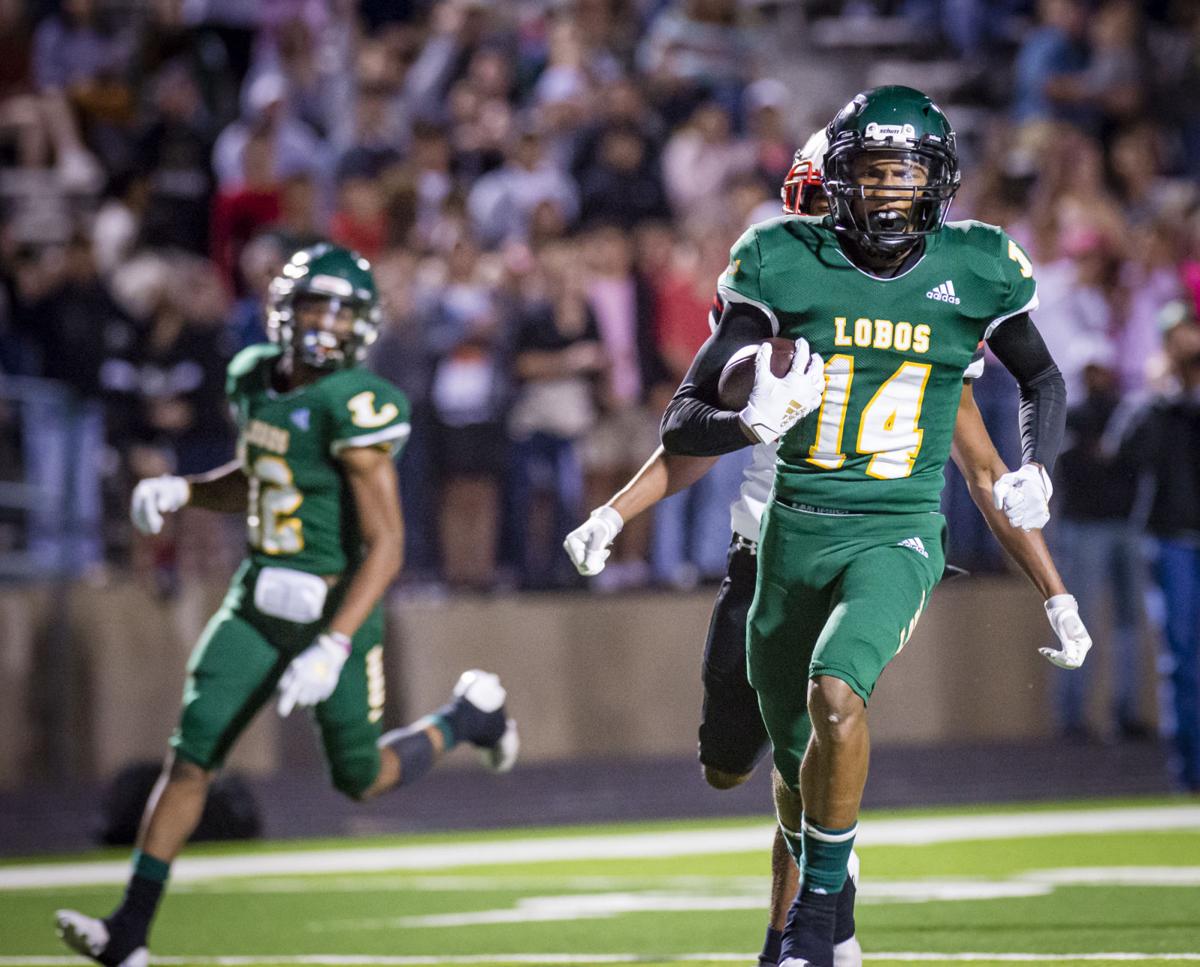 Longview’s Jalen Hale scores a touchdown in 2019 at Lobo Stadium. 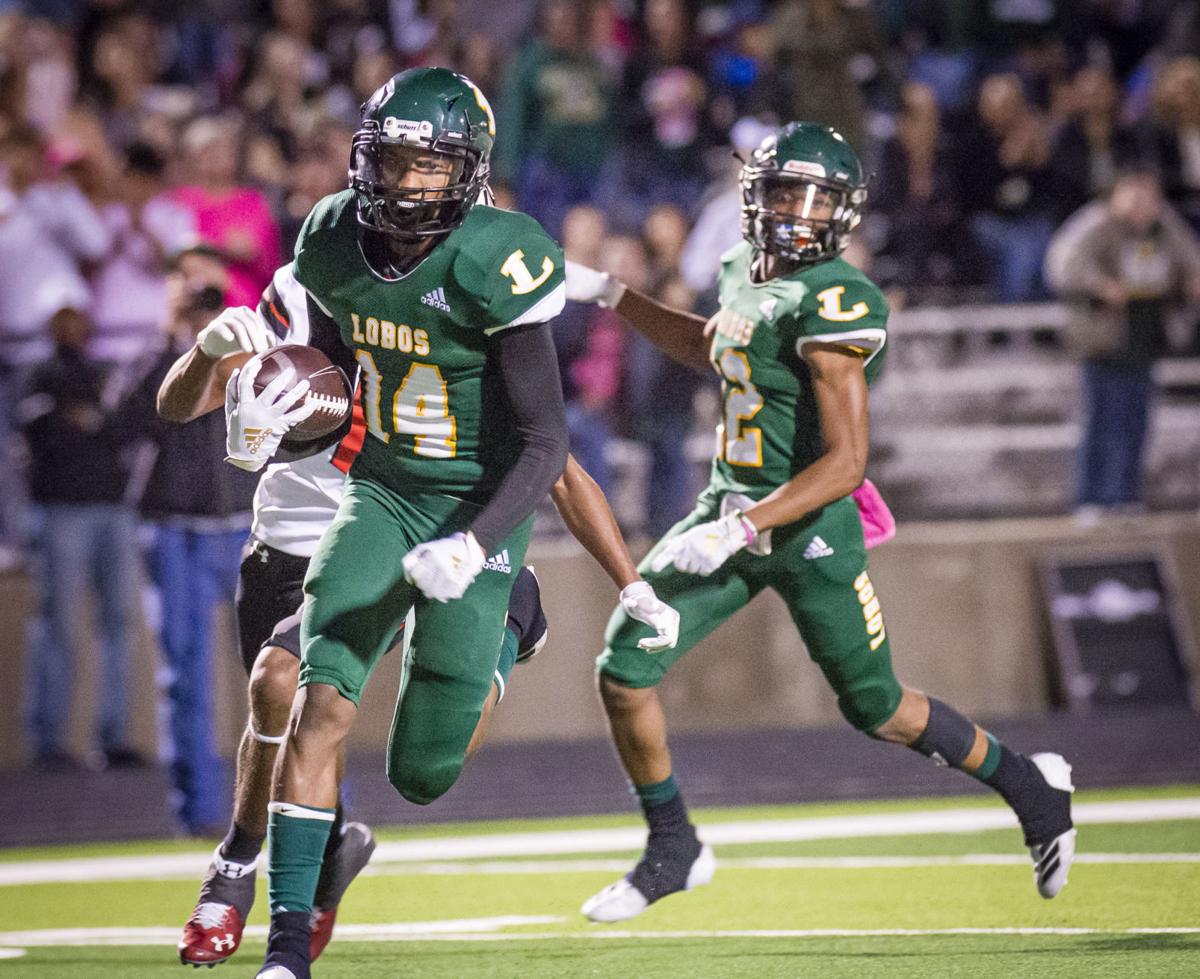 Brothers Tyree, Laqualon and Jalen Hale have come up big for the Lobos this season.

Laqualon Hale (39) and Tyree Hale line up during practice at Lobo Stadium.

Longview safety Tyree Hale gets set before a play during practice at Lobo Stadium.

Jalen Hale makes a catch for Longview, on Friday November 15, 2019, during their 6A bi-district playoff game with Temple at Lobo Stadium. (Michael Cavazos/News-Journal Photo)

Longview’s Jalen Hale scores a touchdown in 2019 at Lobo Stadium.

Jalen Hale got called up as a freshman at Longview, something that hasn’t happened in a long time in Lobo football, and was admittedly nervous.

That’s until he stepped on the field.

Waiting for him were his two older brothers, Tyree at safety and Laqualon at linebacker, and from then on, like they did growing up, they pushed one another.

It’s worked out well for the trio of Hales that suit up for the Lobos.

“I was nervous,” Jalen, now a sophomore, said. “But when I touched the field with them, it felt right.

All three have been major contributors for the Lobos over the past two seasons. Tyree and Laqualon are returning starters that saw time on the field as sophomores and leaders for the Lobo defense. Little brother Jalen quickly emerged as a go-to target at wide receiver.

“It’s a unique thing, for sure,” Longview head coach John King said. “We’ve had plenty of brothers come through the program but three at the same time and for two years, that’s special.

“They’re three talented players and hard workers. They all bring something different to the table but most importantly, you can count on them. That accountability starts at the house in making sure they’re doing right in the classroom, at workouts or on the field.”

This season, Laqualon leads the Lobo defense with 69 tackles to go with six tackles for loss, two sacks and a forced fumble. Tyree, at safety, has 46 tackles, a team-high four interceptions and three passes broken up. Jalen is the leading receiver with 33 catches for 552 yards and eight touchdowns.

“Tyree is a leader in the secondary and plays with a lot of heart, grit and intelligence with a high level of awareness,” King said. “Laqualon is very strong, physical and has progressed so much since playing varsity football as sophomore. Jalen is an explosive receiver with so much talent and potential.

“They’ve all found their calling on the field.”

They came up pushing one another in every way possible.

Laqualon added: “And some baseball, too.”

“We get a long pretty good but we’re competing every time in everything,” Tyree added. “Everything.”

Tyree and Laqualon came through the program with players like Jephaniah Lister and Tyshawn Taylor ahead of them at their respective positions and learned a long the way.

“I learned to work hard every day and just be a dog when you out there,” Tyree said. “I learned to make sure that everyone is getting better every day.”

“He’s a special talent and he’s the benefactor of growing up with older brothers — you have to learn how to compete, whether it’s the driveway, the yard or the field. You always see it with the younger ones, they come in a little more advanced because they had to go play with the older guys.”

Tyree said that the Lobo defense, which has 23 takeways and held opponents to three yards per carry this season, has improved each step of the way.

“I feel like this defense is good but we can be even better,” he said. “Game by game, take the good, fix the bad and move on. That’s what we’ve done this season.”

It’s that mentality that he hopes people remember the Hale name at Longview to go with some big hits and big catches.

“The mentality that we played with,” Tyree said. “And that we worked hard every day.”