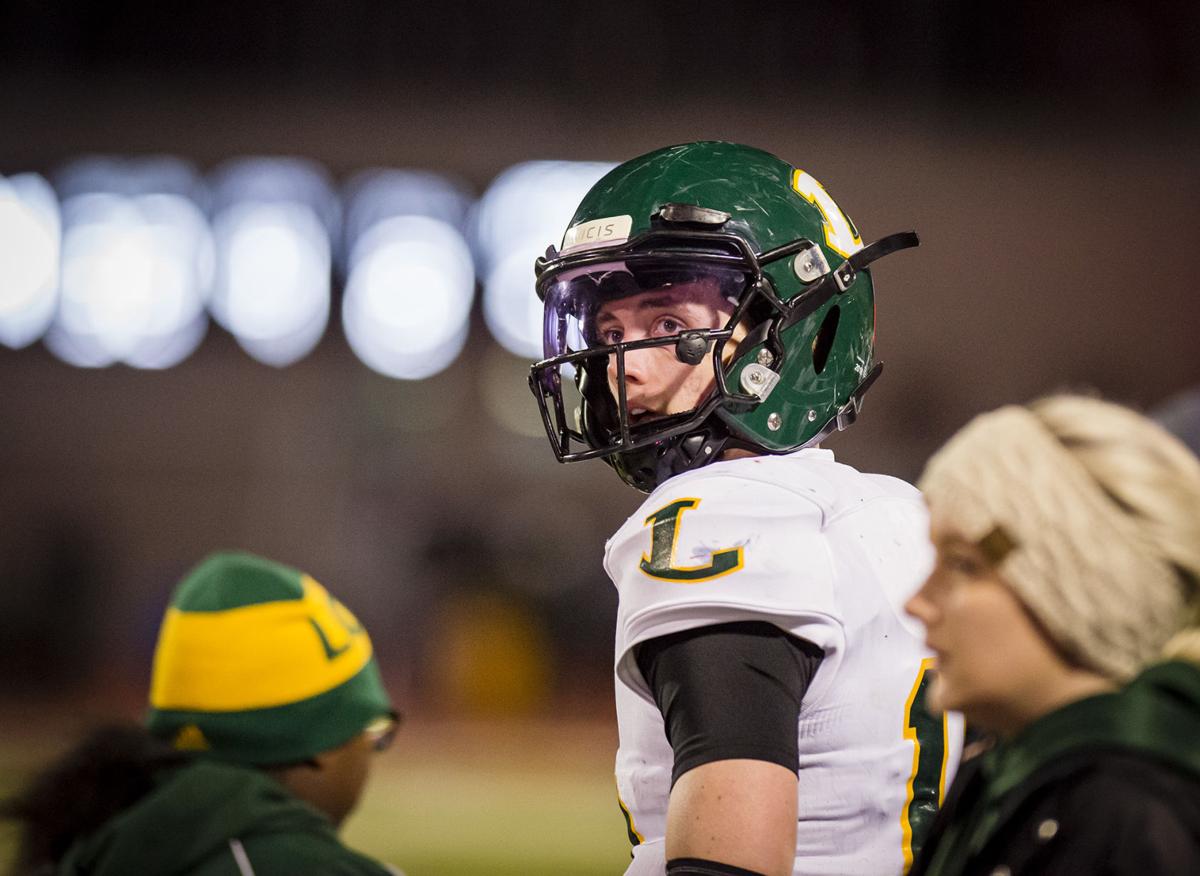 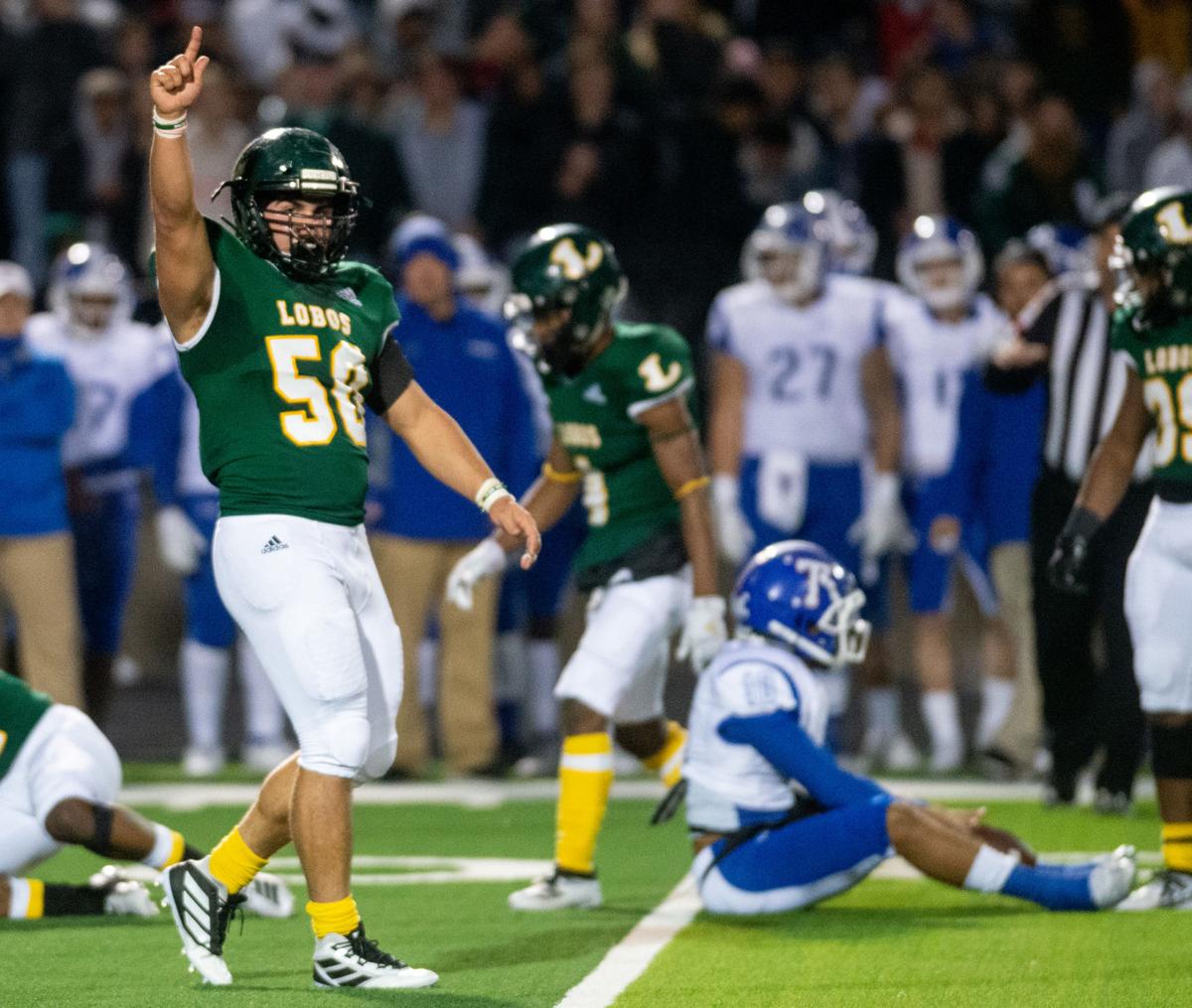 Temple vs Longview during their 6A bi-district playoff game, on Friday November 15, 2019, at Lobo Stadium. (Michael Cavazos/News-Journal Photo)

Temple vs Longview during their 6A bi-district playoff game, on Friday November 15, 2019, at Lobo Stadium. (Michael Cavazos/News-Journal Photo)

Turning the page to a new chapter was never going to be easy, win or lose.

It was going to come to an end, no matter what the finale was going to be. That’s football and that’s life, a message that coaches deliver to their team when the end inevitably comes.

The most recent chapter in a storied history for the Longview Lobos was one hell of a run, no matter how you look at it.

It came to a screeching halt for the Lobos in the second round of the playoffs this season. A shocking end, yes, but it won’t derail what they just accomplished.

The Lobos just won 40 games over the past three seasons and rattled off 27-straight wins, a run that will forever stand out in 110 years of Lobo football.

Oh yeah, the 2018 Class 6A, Division II state championship is in that run as well. Expectations were sky-high entering 2019 season even in a place where winning is expected.

”I thought they handled it well with everything surrounding this team coming into the season,” Longview head coach John King said. “I’ve seen teams that have had an early exit before and they came back the next season with a chip on their shoulder.

”These kids, this season, they kind of had that chip on their shoulder just due to the fact that they were the defending state champions with the expectations of doing it again while knowing they were going to get everyone’s best shot. It was unfamiliar territory for us but we went back to work the first chance we had, the first opportunity, and we didn’t miss an opportunity to get better. That’s the mindset of the program. That carried us throughout the year and enabled us to do the things we did.”

In 2019, it was the Lobo defense that led the charge. The numbers put up by this unit were staggering: 10 points allowed per game, 2,389 total yards and holding opponents to below their season average week-in and week-out.

”We had 11 guys over there that really enjoyed playing the game together, whatever 11 were on the field,” King said. “They played with a frenzy, played extremely hard and took a lot of pride in doing their assignments and holding teams to as few of yards and points as possible.

“It became a challenge for them. They gave us a chance a lot of times when we spit-and-sputtered on offense and a lot of times, they won the game for us.”

Offensively, the Lobos had challenges to overcome with a new offensive line and to find the 2019 identity.

”It’s a unit that had some struggles early on but overall, they all got better and we found an identity,” King said. “It wasn’t as explosive as it was the year before but we had a different group of kids and we had to be a different style of offense that gave us a chance to win.

“You look back on it and everyone cane say that the offense wasn’t as good as it was before. Well, we just averaged 43 points a game and 450-something yards.

”Overall, all things included, there were great team victories each week, no matter how we had to get it done.”

The goodbyes, particularly to this graduating class, were never going to be easy.

”It’s all part of turning the page and it’s always tough to say goodbye,” King said. “There were unsung heroes and you think about the guys this year and the way they played, guys like Drew Beltran (27 tackles for loss, 11 sacks) and the year he had, Parker Cox, a three-year starter, Tim Polk got his first chance to start and the pride he had in it. You had to just drop a few names because you could go on and on,” King said, his voice fading.

“Tyshawn Taylor (119 tackles, 19 TFL, seven sacks), the kind of football player he was the past couple of years. Big Sawyer (Goram-Welch), Jhailon Braden, guys that have been a part of this for a long time.

”They all did it the right way, competed in practice and had a lot of pride about them.”

Then there’s the quarterback.

”When you throw your own son in the mix, it makes the goodbyes even worse,” King said of Haynes. “Not many people get to coach their kids and get to enjoy the success that we had with him at quarterback. It’s far from all on him, the good and the bad. Just for him to be part of it, to watch the way he loved playing with his teammates and playing for Longview. Not everyone gets to enjoy that as a coach.

”I’m going to miss them coming through that door, I know that.”

”It’s not easy and it’s a tough pill to swallow for these seniors and those that came before and after them after what they’ve meant to this program and the joy they’ve brought Lobo Nation with this three-year run. You hate to see it end the way it did, we were hoping for along playoff run but it didn’t happen. This is Texas high school football. To say you just won 40 games and lost three, that rarely happens in high school football. And they got that ring.”

As this decade — one that included two trips to the state semifinal, one quarterfinal, three third-round appearances and that ring — and chapter comes to an end, it’s time to reflect, celebrate and turn the page.

”Turn the page, that’s what we started on Sunday as we get these underclassmen ready to start the offseason the first chance we get,” King said, the 2020 depth chart on his computer screen just over his shoulder. “It’s been the best three-year run in program that will be tough to match but, by God, we’re going to try.”

You can’t prepare for finales. That’s football and that’s life.

”You can’t be ready for the end, no matter how it comes to a close,” King said. “You work, you grow, you fight and leave it all on the line and, hopefully, when it comes to an end you just try to find the right words.

”It’s the things you teach them throughout the year, to handle the good and the bad and not let the moments define you in football and in life. It’s an emotional thing, the game of football.”