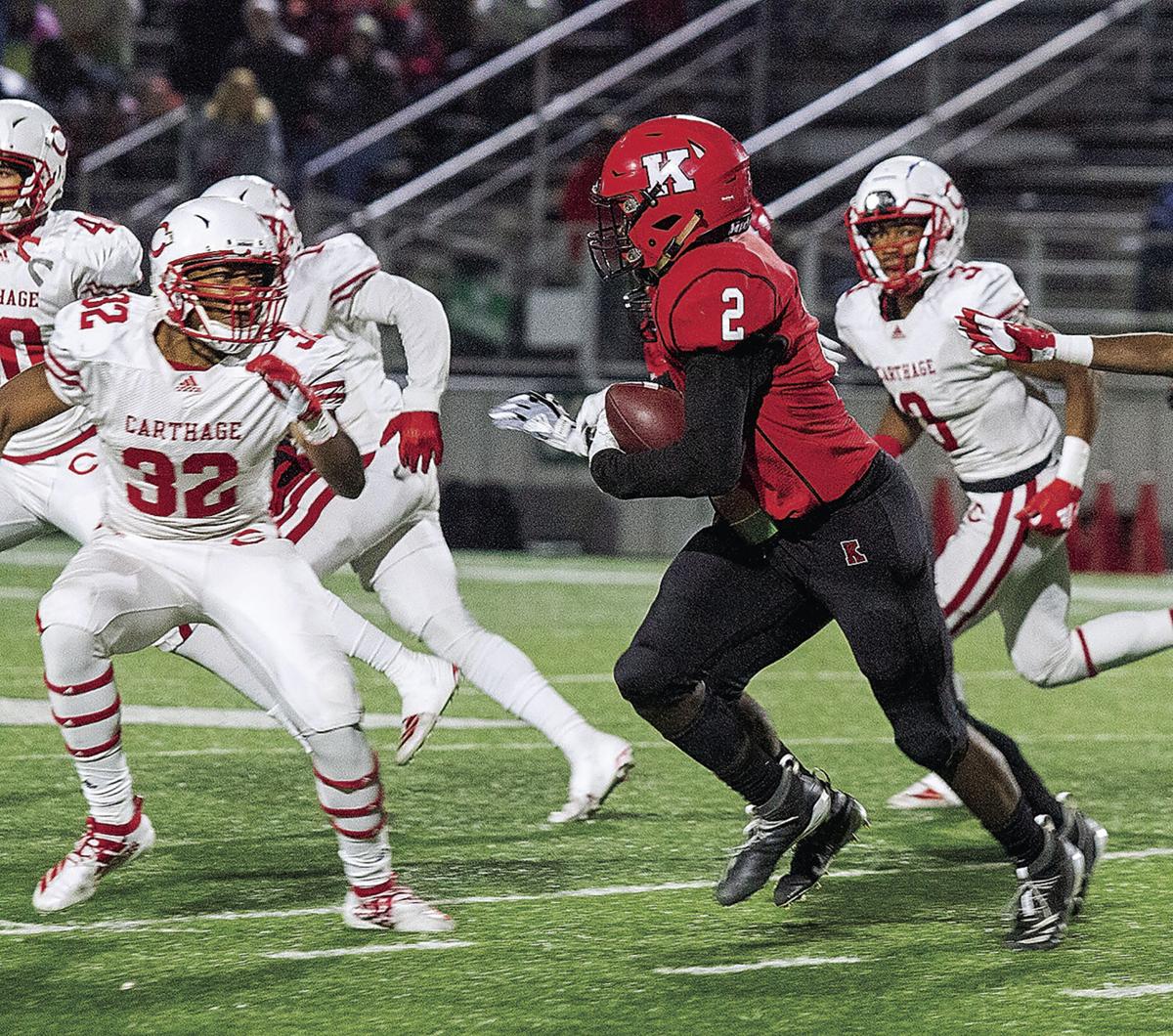 Kilgore's Donovan Adkins runs with the ball during a 2019 game against Carthage. 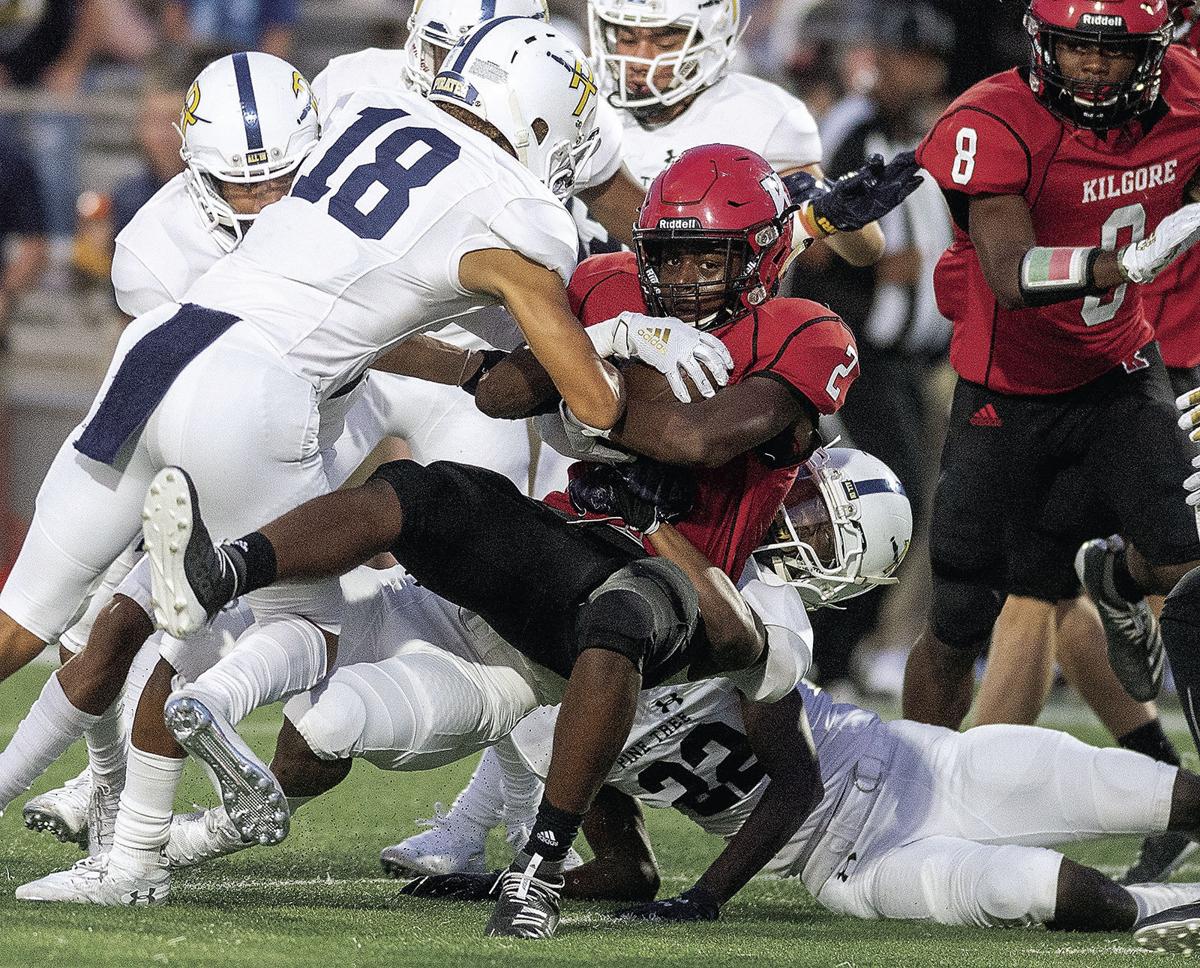 Kilgore's Donovan Adkins is wrapped up as he runs with the ball during a 2019 game against Pine Tree.

Kilgore's Donovan Adkins runs with the ball during a 2019 game against Carthage.

Kilgore's Donovan Adkins is wrapped up as he runs with the ball during a 2019 game against Pine Tree.

The multi-talented dual athlete for the Kilgore Bulldogs took part this past weekend in the Blue-Grey All-American Combine at AT&T Stadium in Arlington.

Adkins was able to use the one-day event as sort of a job fair in order to spark the interest in college football coaches across the state.

The senior-to-be earned a Top Performance medal for having recorded the best mark in the broad jump. Adkins also competed in the 40-yard dash, bench press, a shuttle run and had a sit down interview.

"It was a tremendous four-hour experience. I met lots of people and made some new friends. I learned some new techniques through different drills. It was great," said Adkins, who is also a standout in baseball and came back to play club ball the very same day as the combine.

Adkins is one of those players that seldom comes off the field. He starts at corner on defense, sees ample time at receiver on offense and is a key contributor on special teams for the Bulldogs.

"I take pride in what I do on the field and try to be great in everything. I start at a corner on defense, but I feel like my impact is made on the offensive side," Adkins said. "We have a lot of young, undiscovered talent on offense and that allows me to concentrate more on the defensive side."

Adkins, who currently holds offers from Louisiana College and Texas Southern University, believes the exposure he received at this past Saturday's combine will work to his favor.

"Donovan is a big player for us on both sides of the ball and on special teams," said Kilgore head football coach Mike Wood. "Going into his senior year, he's gonna be a part of everything we do. I know he's on a lot of school's radars and he's gonna find a good place to play."

As a sophomore in 2018, Adkins totaled 64 tackles with one pick. This past fall he tallied 57 stops with five interceptions, five passes defended, two forced fumbles and a couple blocked kicks. Adkins can also provide a spark on offense as his 23 receptions for 340 yards and four touchdowns will attest.

"Defensively he's the type of corner that can match up with the other team's best receiver. That's a big upside for him with his athletic ability," Wood explained. "Offensively we'll use him in a number of positions. He'll play some receiver and some Wildcat quarterback. He's a kid that's developed and worked real hard in the weight room."

Kilgore is scheduled to scrimmage at Gilmer on Aug. 14 and return home to R.E.St. John Memorial Stadium on Aug. 21 for a scrimmage against Carthage. The Bulldogs will be on the road at Nacogdoches on Aug. 28 for their 2020 regular season opener.