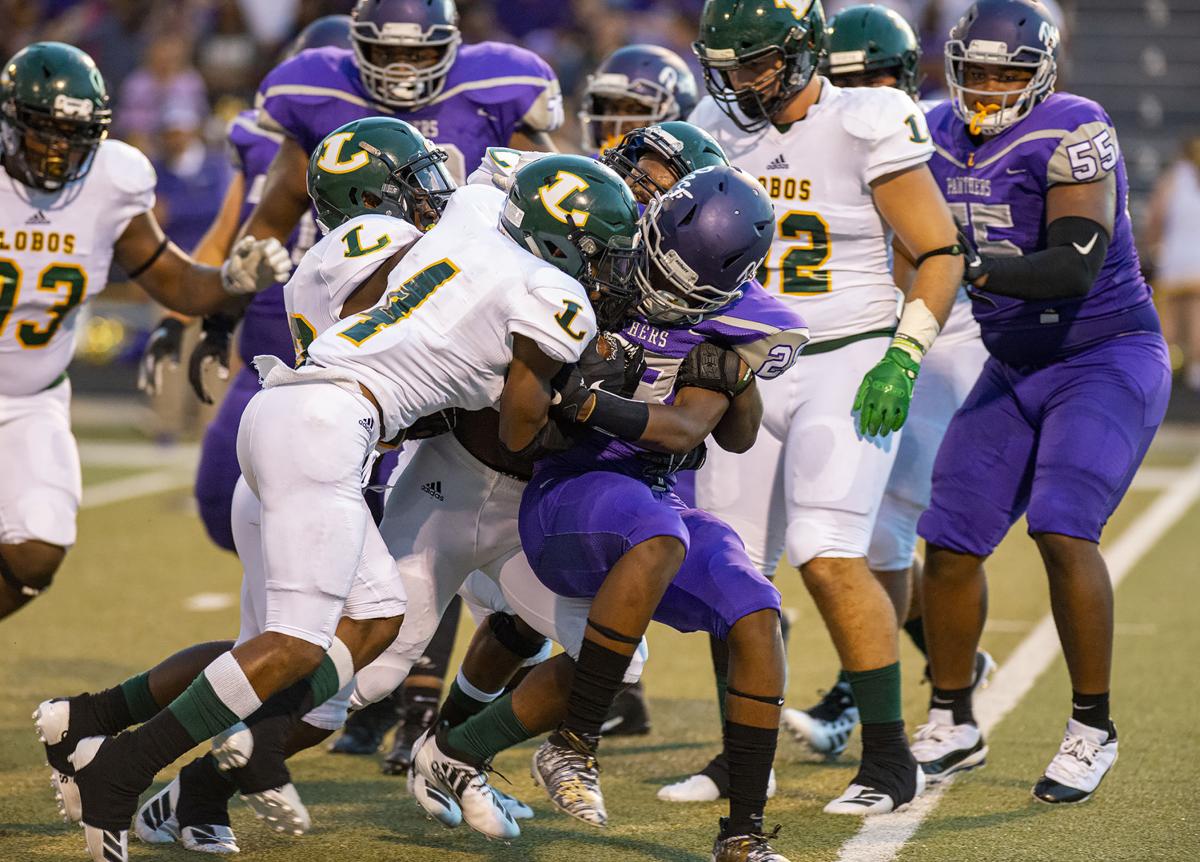 Longview’s Malik Cannon and other defenders stop a Lufkin ball carrier on Friday at Abe Martin Stadium in Lufkin. 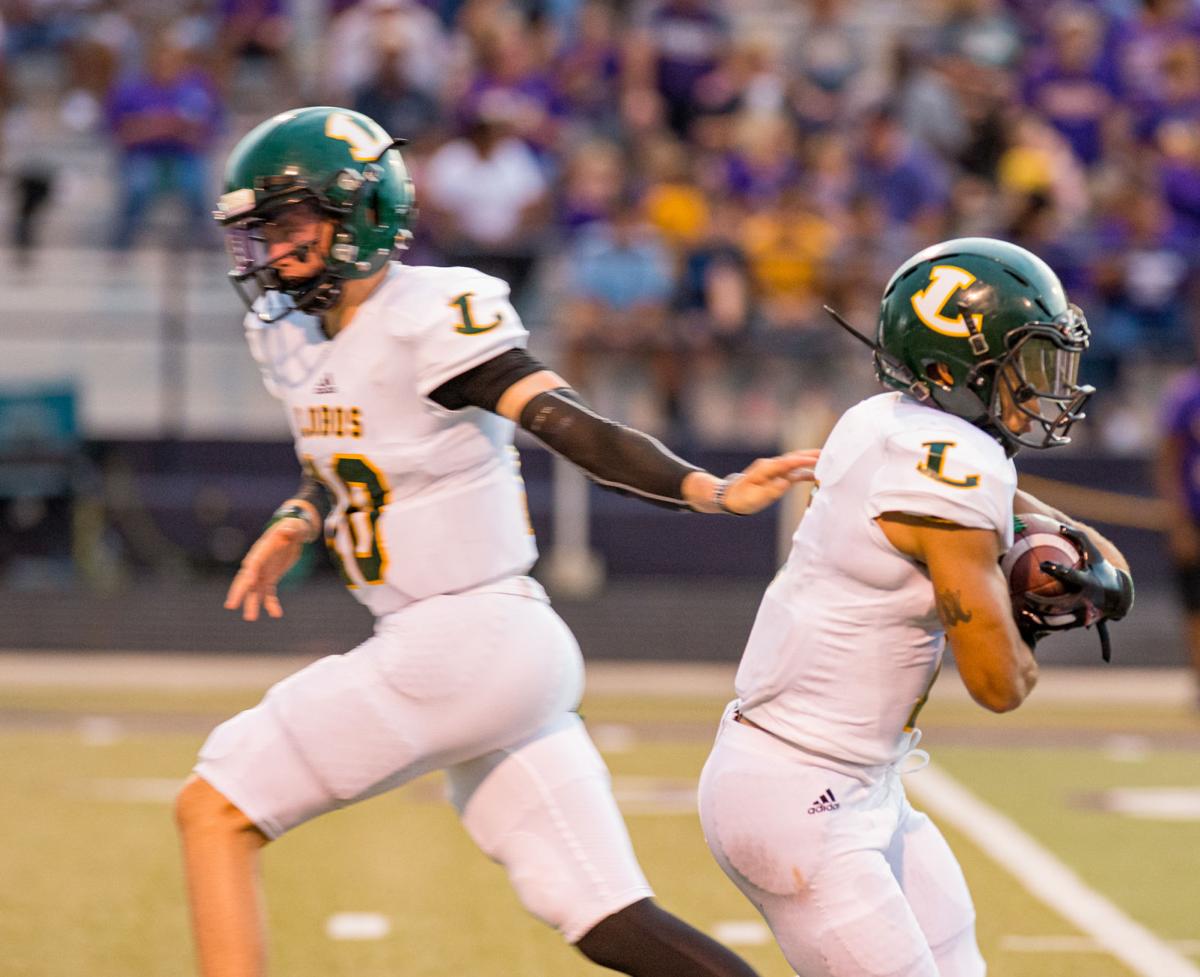 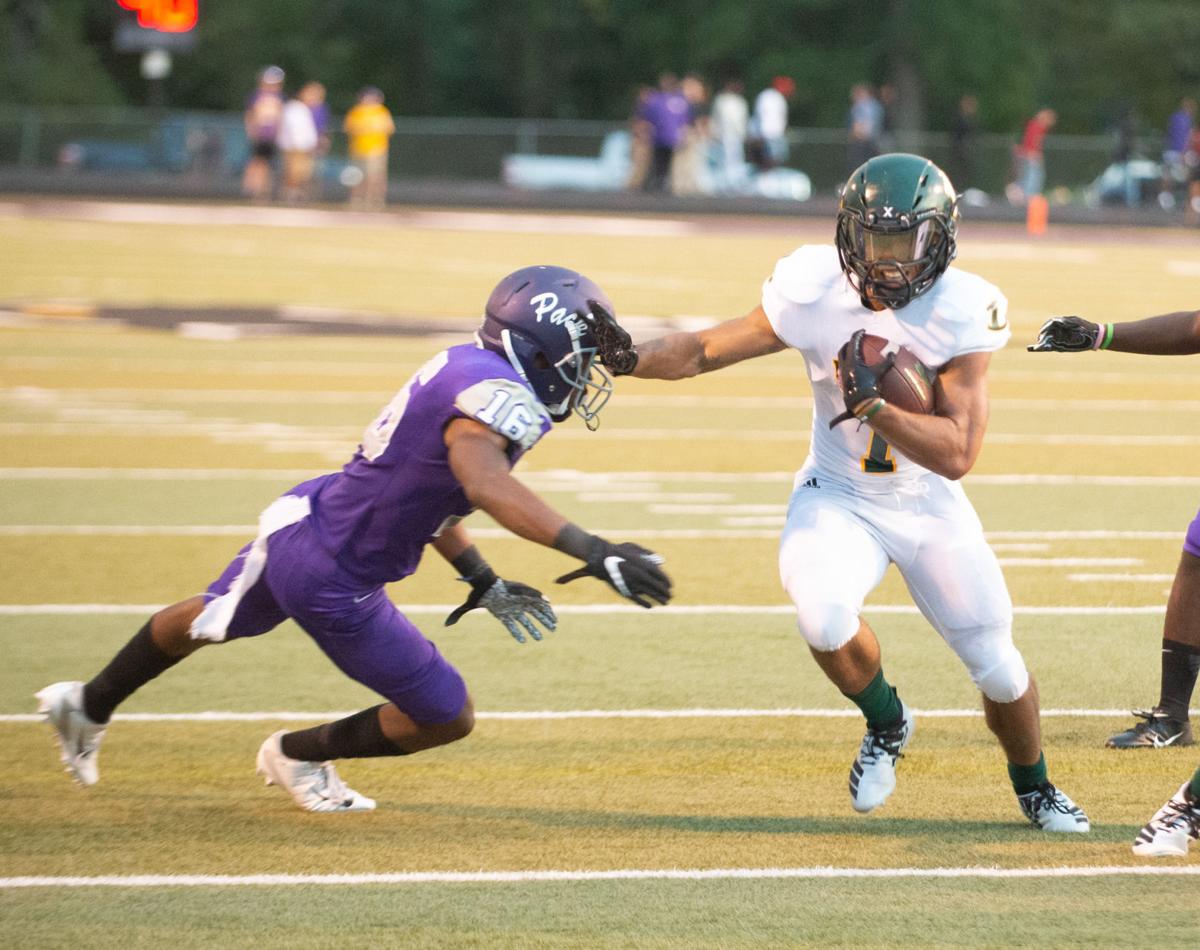 Longview’s Malik Cannon and other defenders stop a Lufkin ball carrier on Friday at Abe Martin Stadium in Lufkin.

For the first time this season and the only time in its non-district schedule, Longview will break in the new turf at Lobo Stadium this Friday against the Marshall Mavericks.

Longview returns home for homecoming, Green Out and, most importantly for Lobo head coach John King, a chance to improve and keep building.

“We better enjoy it because it will be a little while before we’re back home,” King said Monday, following Longview’s season-opening win over Lufkin on Friday. “There will be a lot of excitement with everything going on and it’s good for all the programs here at the school.

“We’ve got to improve, get prepared for a ballgame and do our part to add to the excitement of the night as well.”

Friday’s season opener was filled with ups-and-downs and responses to the roller-coaster night that comes with Week 1 and, in particular, in Lufkin.

“It looked like a typical Week 1 ballgame, a lot of mistakes and a lot of big plays,” King said. “I thought this football team gave great effort for four quarters, particularly on the defensive side with big play after big play when it mattered most.

“Abe Martin Stadium is a difficult place for kids to grow up and mature on the field and I feel like we did that for the most part but we’re going to have to clean some thing sup. We didn’t play too particularly well in some areas. There were bright spots but way too many mistakes. Like I told the kids, the mistakes we made might be bad enough to not be able to overcome to win in Week 2 and they’re dang sure bad enough not to win down the road. It’s going to come down to how quickly we can get those mistakes cleaned up and play a lot better football as a whole.”

Offensively, closing drives was an issue for the Lobos, who rolled up 471 total yards and had a 63-50 advantage in snaps. Longview finished with 188 rushing yards on 27 carries, an area King said must improve going forward.

“I would say probably about a B grade,” King said. “We had some missed opportunities and really had a chance to get control of the game in the first half and we didn’t do that.”

The Lobos spread the ball through the air with six receivers coming down with a catch in 36 pass attempts from quarterback Haynes King, who was picked off twice.

“It was a good night for our receivers, a group that all do things a little differently,” King said. “They caught the ball well for the most part when it was there and blocked well. We’ve got some new faces out there and the season guys like Kaden Kearbey and Kyas Moore played well and played unselfish football.”

Defensively, the Lobos had six players turn in at least six tackles, led by senior linebacker Tyshawn Taylor, who had a team-high and career-high 14 stops. The Lobo defense came away with back-to-back stops in the fourth quarter to seal the 24-21 win.

“Solid start from that side of the ball but I think they would all say that there is plenty of work to be done,” King said. “Big plays when it mattered most.”

Monday’s Labor Day practice was full of the high-intensity work that has come so far this fall. King said there were ‘bumps and bruises’ but no one is expected to miss playing time.

“We can’t feel like the effort we gave and the execution we had is good enough to win in the next few weeks,” King said. “Take it for what it is: Week 1. Both teams made a bunch of mistakes. The teams that eliminate those mistakes are the ones that start playing and winning at a high level.”

Meanwhile, Marshall waited out a two-hour-plus rain delay in its season opener against Tyler Lee, a District 11-6A opponent for the Lobos. The Red Raiders finished with two rushers with over 100 yards in a 27-20 win.

Marshall finished with 388 yards of total offense and four turnovers.

“Offensively, they’re very athletic with big-play capability in the skills spots,” King said of Marshall. “Defensively, they’ve got a ton of speed in the secondary. I’ve been very impressed with their defensive line, especially the two inside guys. They’re hard to move and played well the other night.”

The 109th meeting between Longview and Marshall is set for a 7:30 p.m. kickoff on Friday at Lobo Stadium.