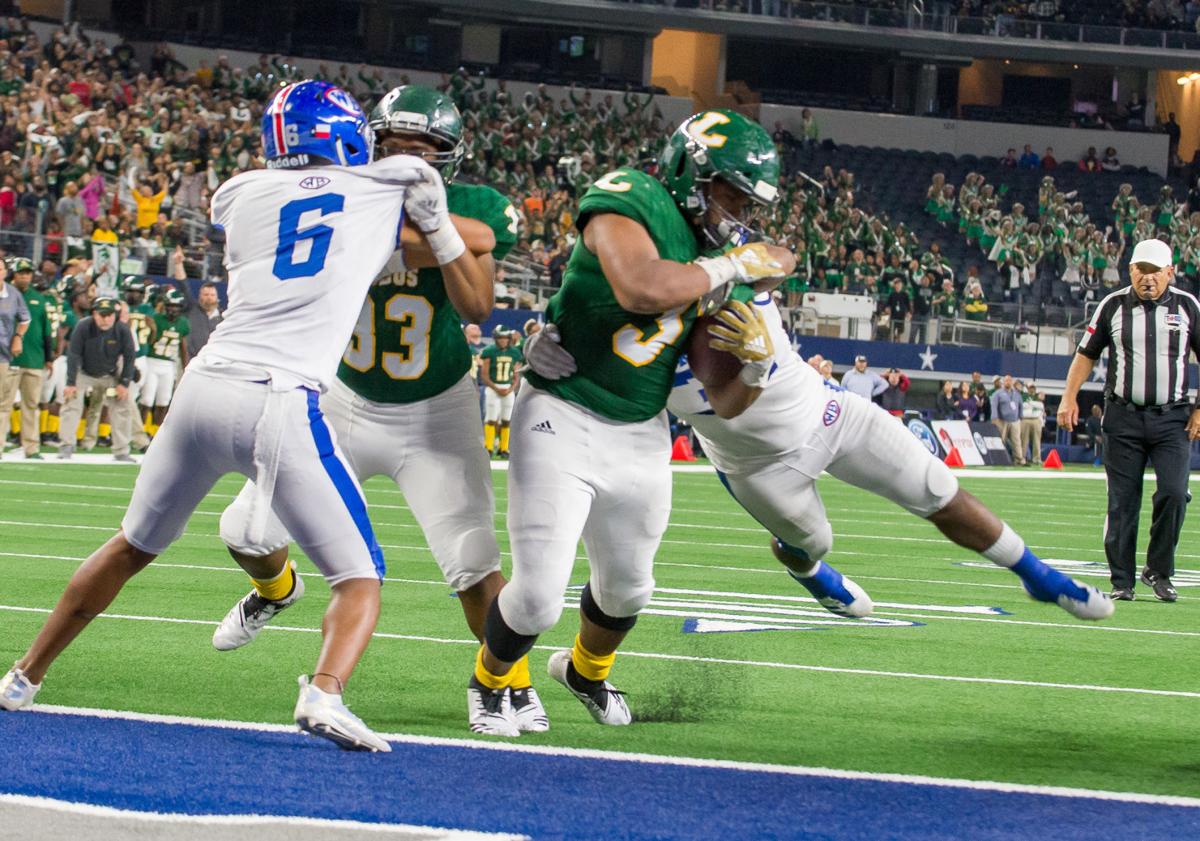 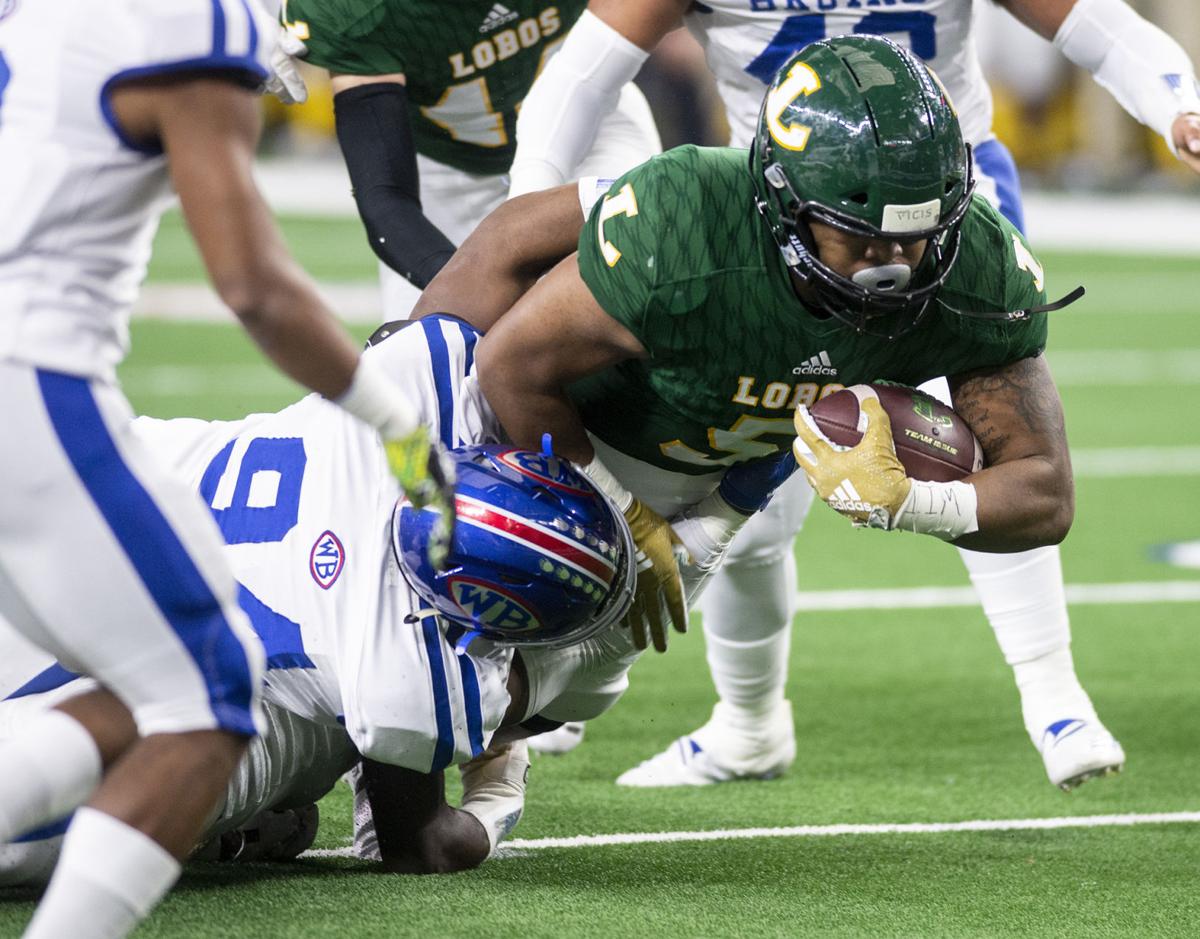 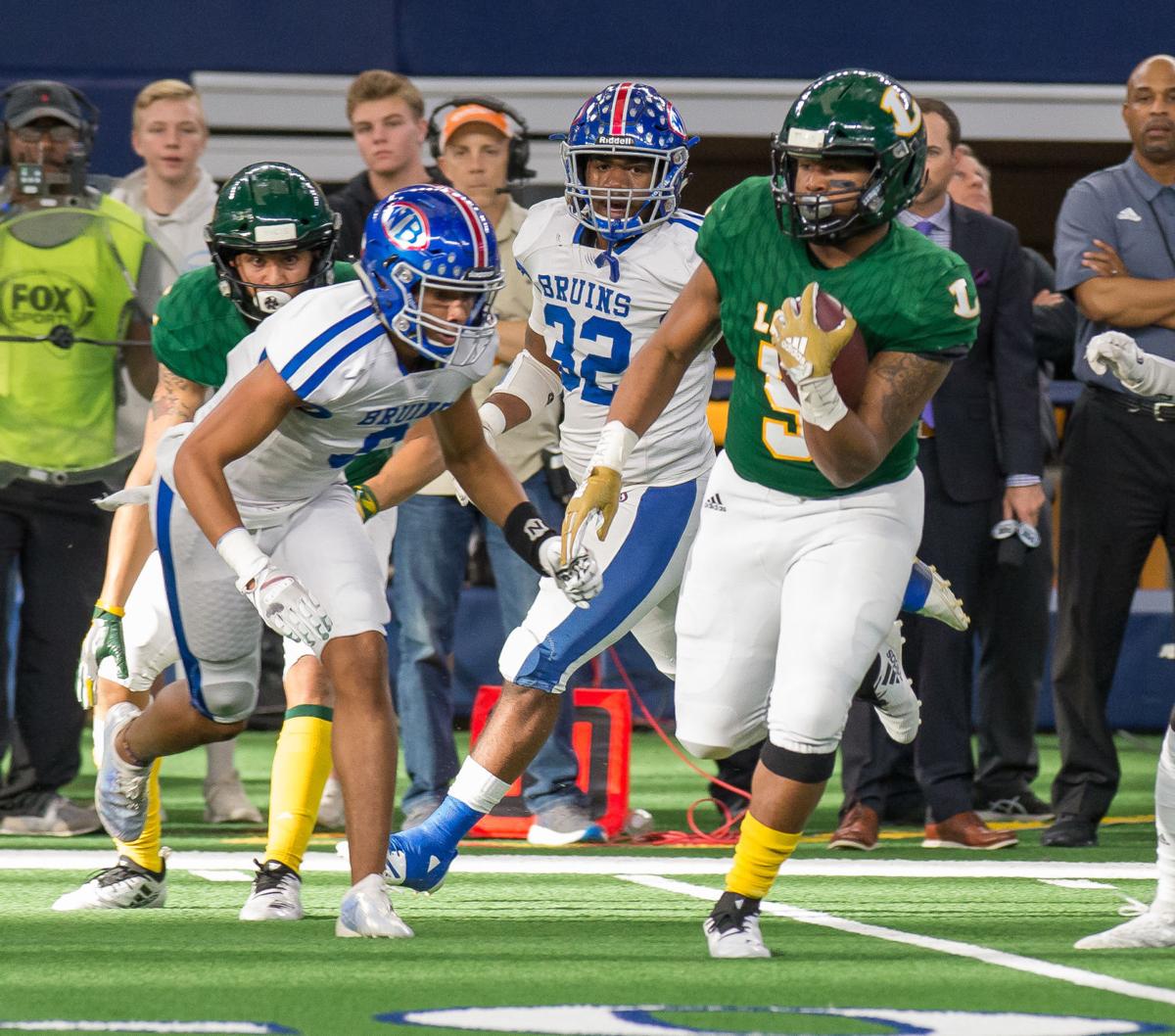 Longview's Jessie Anderson picks up a first down and puts the Lobos in scoring position during Saturday’s December 22, 2018, state championship game against Beaumont West Brook in Arlington. 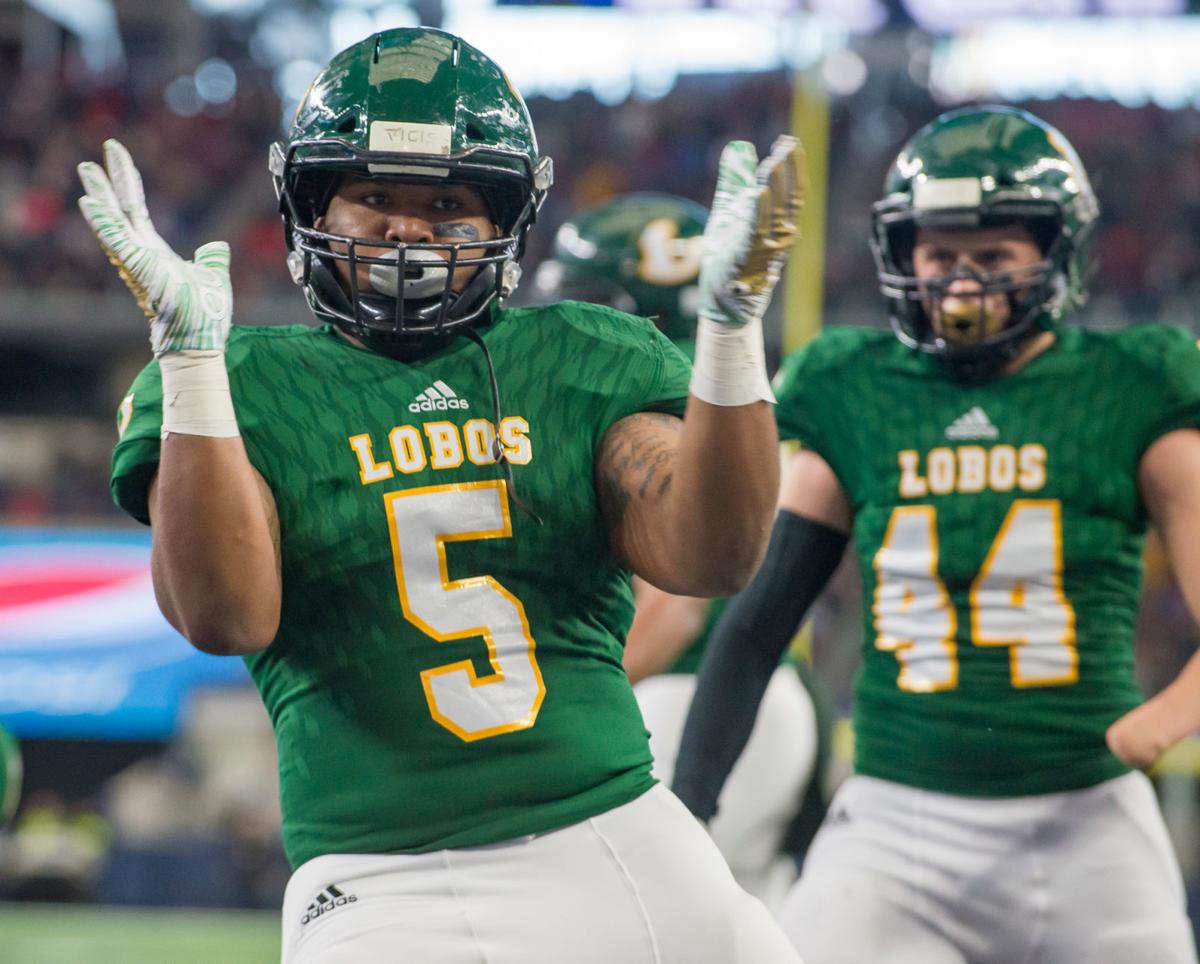 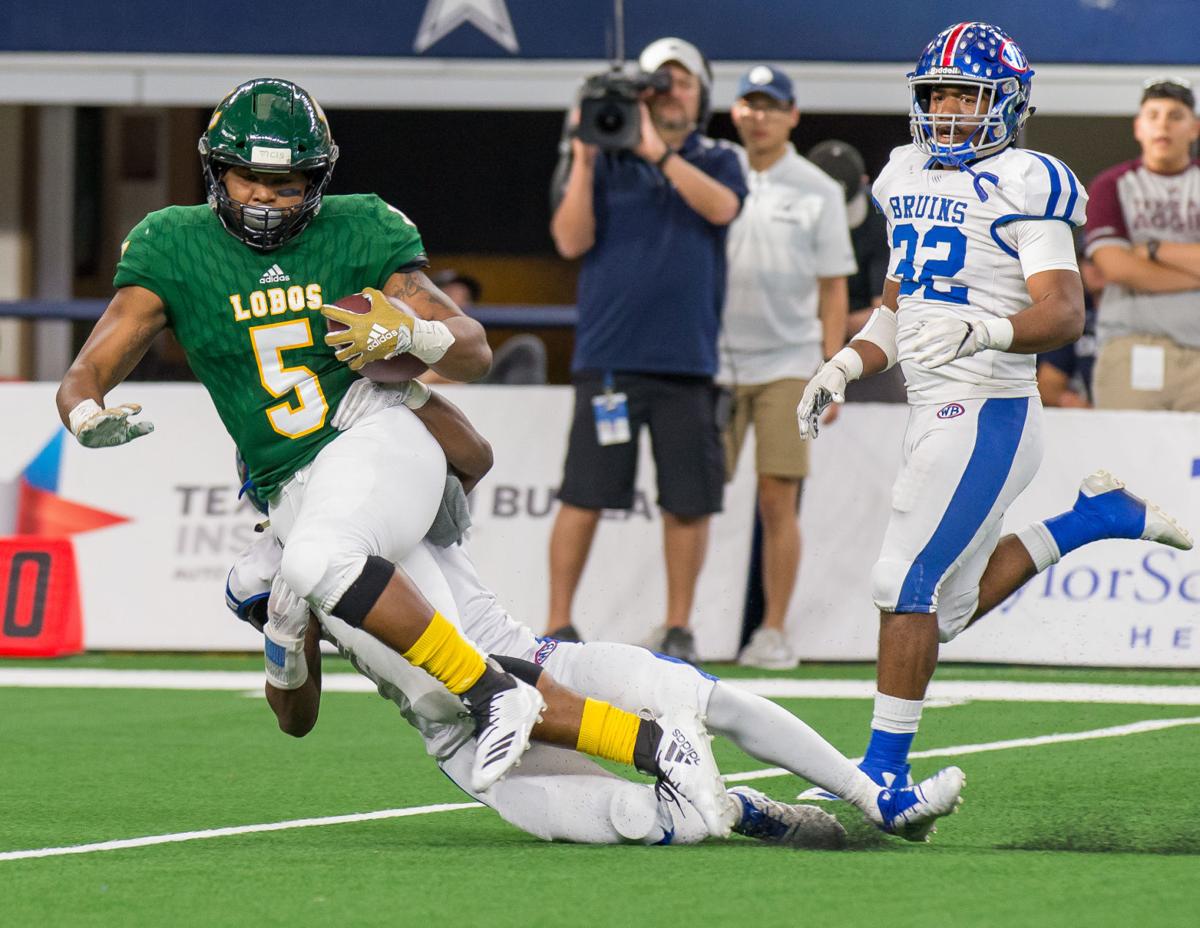 Longview's Jessie Anderson picks up a first down and puts the Lobos in scoring position during Saturday’s December 22, 2018, state championship game against Beaumont West Brook in Arlington.

ARLINGTON — Jessie Anderson was quick to deflect praise when asked what it meant to score a touchdown that will be talked about for ages.

Anderson, a record-setting senior fullback, crossed over from two yards out with 4:42 left in the game to give his Longview Lobos a 35-34 lead.

The lead would stand as Beaumont West Brook turned the ball over on the ensuing possession and Longview was able to run out the final 3:38 for the school’s first football state title in 81 years.

Anderson, who also scored the game’s first TD, fittingly put a cap on Longview’s remarkable run to the top of the mountain. When the Lobos needed to get physical, they had to look no further than No. 5. While his numbers weren’t spectacular — he finished with 35 yards on 10 touches — make no mistake. Anderson’s efforts were game-changing.

“Honestly, I knew I had the weight of the city on my back. I didn’t want to let my team down. So I had to find a way to get into the end zone,” Anderson said in reference to what proved to be the Lobos’ game-winning score.

Finding his way into the end zone hasn’t been much a problem for the 5-10, 225-pound senior. With Saturday’s scores, Anderson finishes the year with 26 rushing and two receiving touchdowns, which breaks the school records of 27 total touchdowns shared by Vondrell McGee in 2004 and Tyler McCray in 2008.

It was Anderson that got the call early and often in the third quarter as the Lobos came out staring a 28-20 deficit in the face.

“We couldn’t do this without Jessie. He’s a real physical back, but people don’t know how much speed he has,” said Lobo junior QB and Offensive MVP Haynes King.

Anderson showed off that speed midway of the first quarter when he pulled in a pass and ran 41 yards. That big play set up the first Lobo touchdown by Anderson from three yards out three plays later.

“They felt like I was the guy that could get us through that hole and drive us over the hump. With me knowing that my city was on my back, I just had to do what I could and keep pushing forward and fight for every yard. I don’t like to be in the limelight, but when my team is calling I’m gonna do whatever it takes.”

Henry: They all bleed Lobo Green

Longview's journey is more than a 16-0 season that brought home the first state title in 81 years with a 35-34 win over Beaumont West Brook in the Class 6A, Division II title on Saturday night at AT&T Stadium.