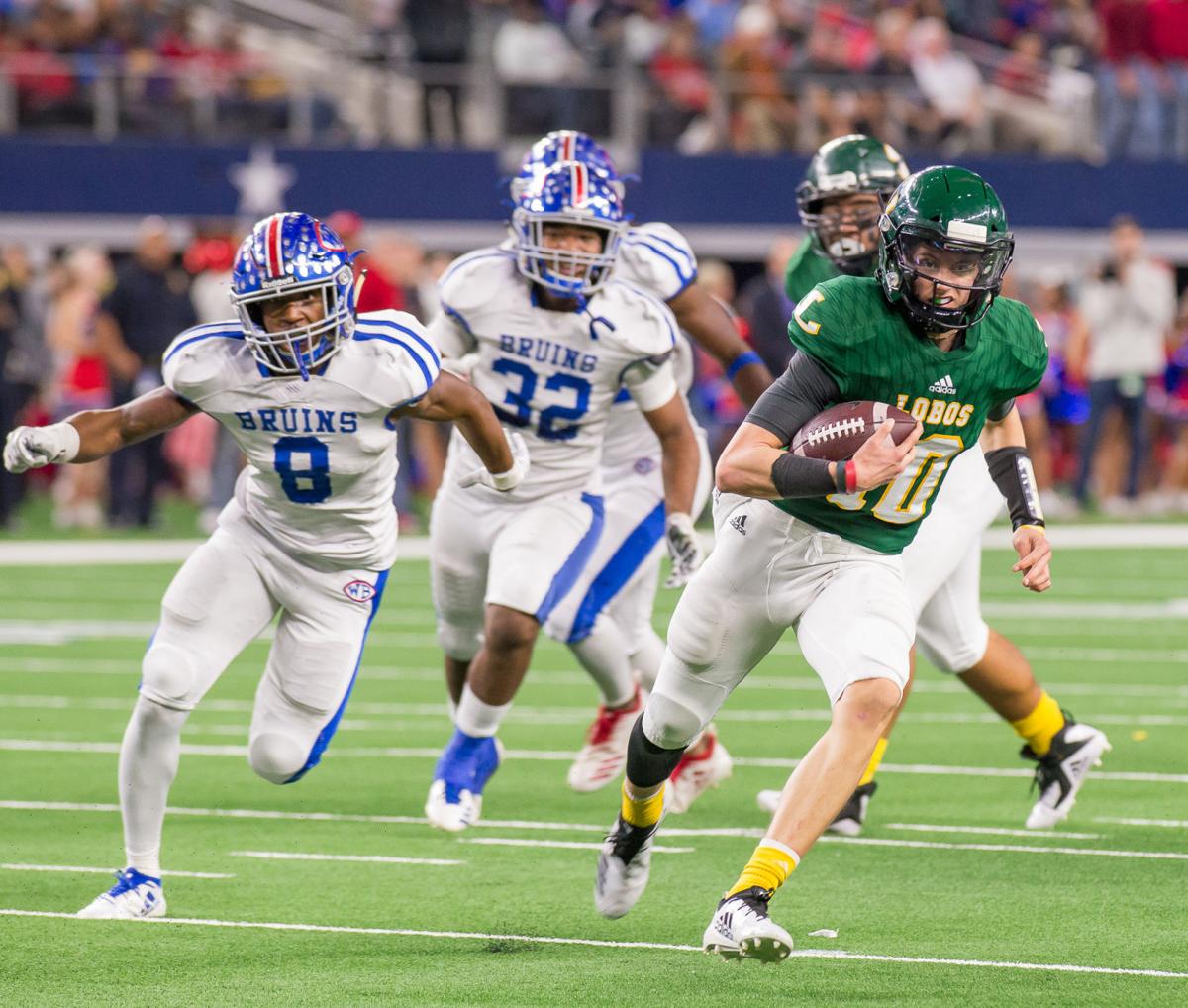 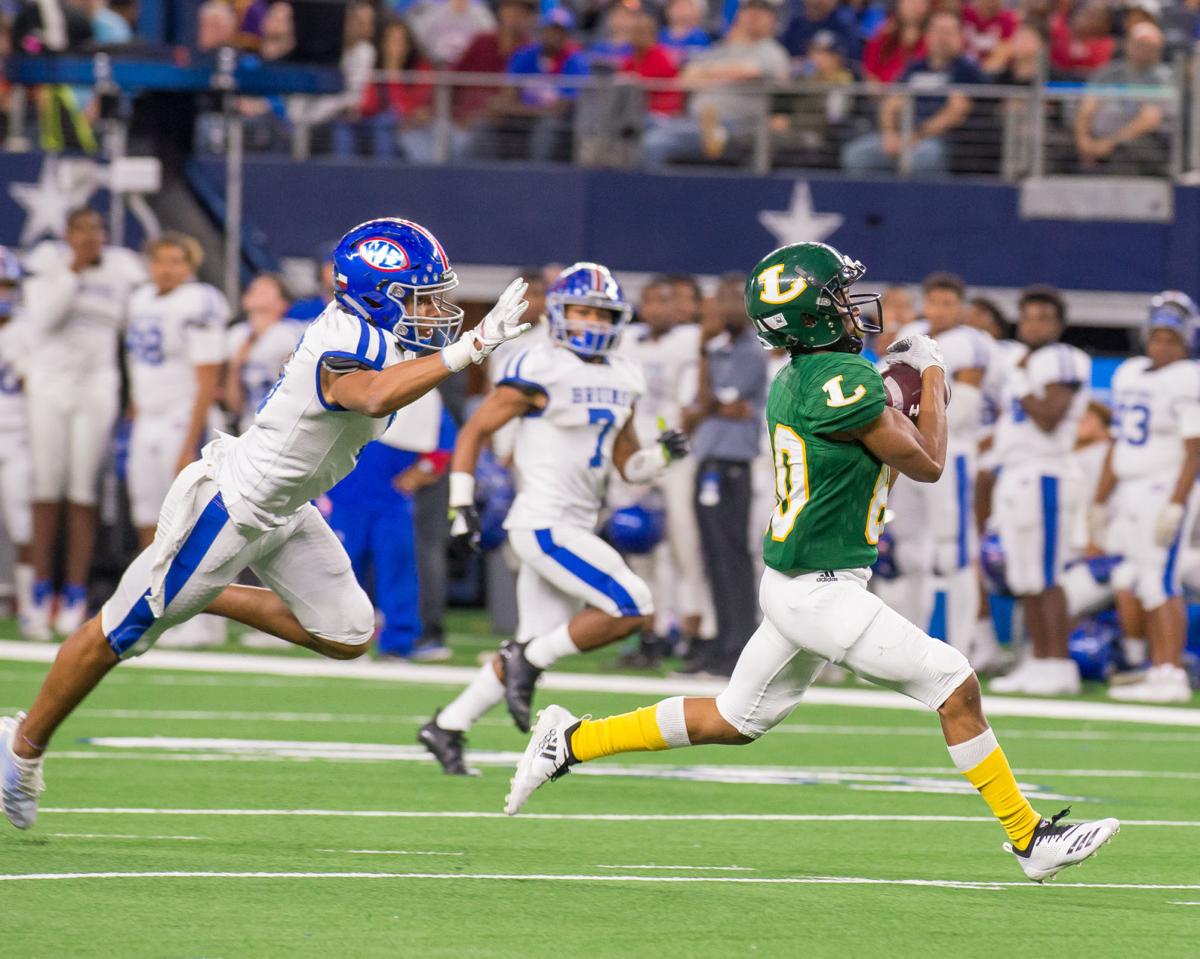 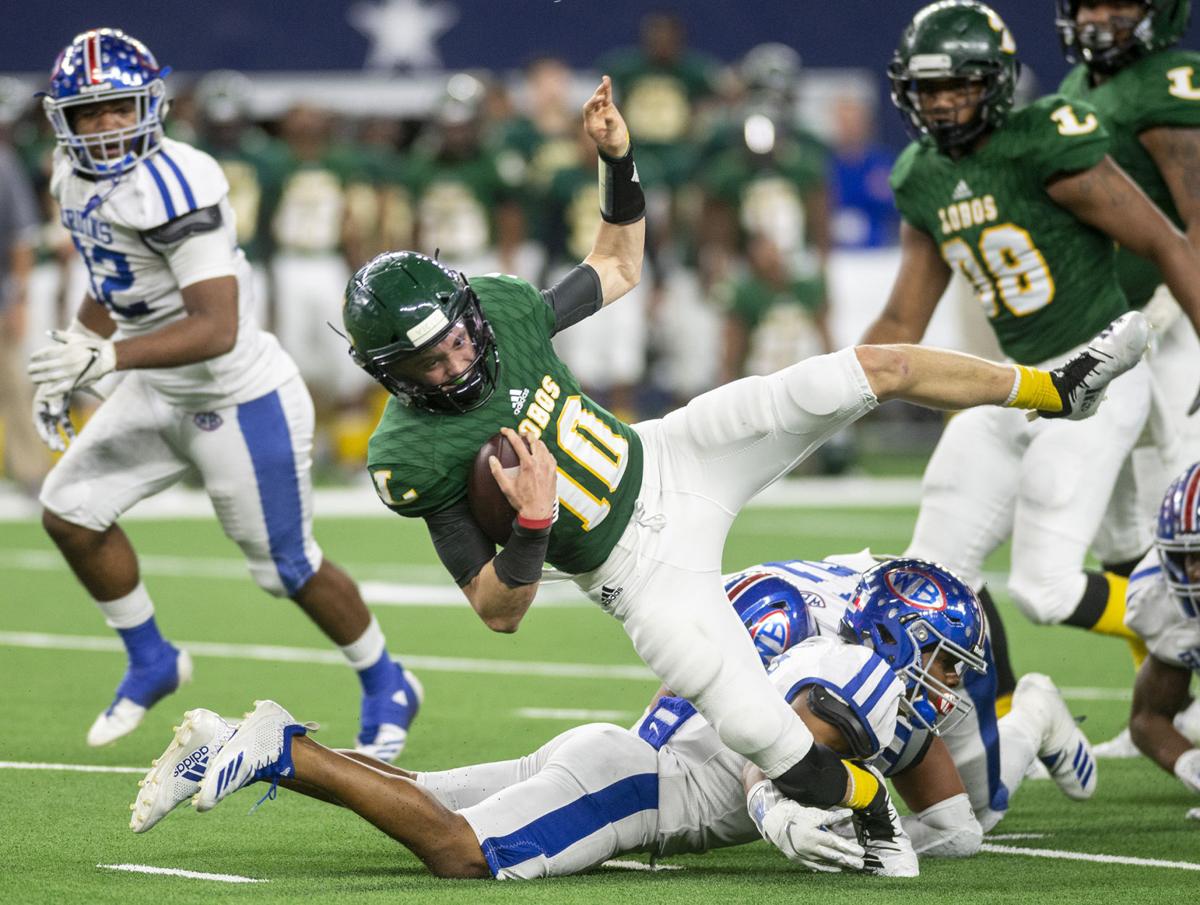 ARLINGTON — With their backs to the wall, the Longview Lobos came up with an offensive drive for the ages.

It was Longview’s 11th series and proved to be the game-winning march in their 35-34 thriller over Beaumont West Brook in the Class 6A DII state championship game Saturday afternoon at AT&T Stadium.

Haynes King, who threw for 423 yards and two TDs and rushed for 65 yards and a score to earn Offensive MVP honors, never had a bigger completion than his 54-yarder to Kyas Moore late in the fourth quarter. The connection carried to the West Brook 11 and set the table for Jessie Anderson’s second rushing touchdown when he bulled in from two yards out at 4:42 of the fourth quarter.

Longview got a huge defensive stop on the ensuing series and the Lobos 12th offensive possession would be their favorite from the victory formation. Keilyn Williams’ 26-yard run assured the Lobos their first state championship in 81 years as King was able to take a knee and exhaust the clock.

A botched point after by West Brook left the Bruins holding a 34-26 lead with 11:34 to go in regulation. This good fortune kept Longview in a one possession contest with the bulk of the quarter to play.

Longview’s 10th possession appeared headed for the bank when King and Kamden Perry, as they’d done all afternoon, connected on a 40-yard play-action pass on the first snap. Anderson ripped off a 12-yard run following the big pass play and the Lobos had moved inside the Bruin 20 in two snaps.

After Longview moved inside the five, a false start moved the ball back to the 11. King was just a tad high on his third down pass to Jhailon Braden and the Lobos settled for a 28-yard JK Martin field goal, cutting the Bruin lead to 34-29 with 8:17 to play in the fourth.

The Lobos pulled within two on their ninth offensive series on as Kaden Kearbey, who had hauled in a 40-yard score in the first half, pulled in a 36-yard comeback that carried to the Bruin 25. King on a straight draw zigged and zagged his way to the end zone as Longview cut the deficit to 28-26 with 3:43 to go. Anderson appeared to have tied the game with the subsequent two-point attempt, but a booth review overruled the call on the field. It was the second such replay review to that point in the game. Score one for the Lobos and one for the Bruins.

This seemed to give the Lobos life after moving 76 yards in five plays and only using 1:40 of the third period to score.

Longview took the second half kick and moved methodically with Anderson getting the call three of the first five snaps. Junior wideout Jayden Williams pulled in a pass from King to move the sticks after Anderson went for nine on first down. King teamed with Kamden Perry for 24 yards and as the ball crossed midfield.

The Bruin defense stiffened and the Lobos were turned away on downs as King’s four-yard scramble came up five yards short on fourth down.

The Lobos had seven first half possessions and were three of five on third downs conversions with 279 yards, 10 first downs and one costly turnover. Average starting possession for Longview was its own 24 yard line and the Lobos possessed the ball for 10:35 of the first 24 minutes.

After failing on their first third down conversion of the afternoon, the Lobos moved the chains twice successfully in their second series, including Anderson’s 3-yard second-effort surge off left guard for a TD. Anderson played a huge part in Longview’s initial convert three plays prior.

King smartly picked up a blitz off the left edge on third and seven and made West Brook pay dearly when Anderson took a pass in the flats and raced 41 yards down the sideline to the Bruin 11.

The second Lobo score came lightning quick as King rolled to his right and found his favorite target Perry, who used a stiff arm on West Brook DB Jarek Brooks and loped 77 yards down the sideline for a TD. Perry dove the final three yards to paydirt and prompted booth replay review. The call stood and Longview took a 13-7 late in the first quarter.

West Brook rose up to stone Longview on its fourth time with the ball. A play-action pass attempt from King to Perry resulted in a 15-yard pass interference. The Lobos were turned away when Anderson took a pass in the flats on third and nine and was stopped after a three-yard gain.

King and Perry made good on a couple of 21-yard pitch and catches on the fifth Lobo possession. The first connection drew a 15-yard face mask on Brooks, who would get his redemption on the heels of Perry’s second 21-yard catch.

After gathering the ball in inside the Bruin 10, Perry attempted to get a few extra yards. Brooks came up to make the tackle and literally swiped the ball from Perry’s grasp as the drive ended in a Lobo turnover.

A defensive stop late gave the Lobo offense a chance to score before the half and they promptly cashed in. King hit Perry on a quick out for 19 yards and Kearbey hauled in a 40-yard rainbow for six on the next snap. West Brook focused double coverage on Perry and Kearbey took full advantage of the opportunity.

ET Football: Lobo defense comes up with big stop when it had to

If you find yourself at the house on the couch and need some thrilling, dramatic and emotional entertainment tonight, then you're in luck.