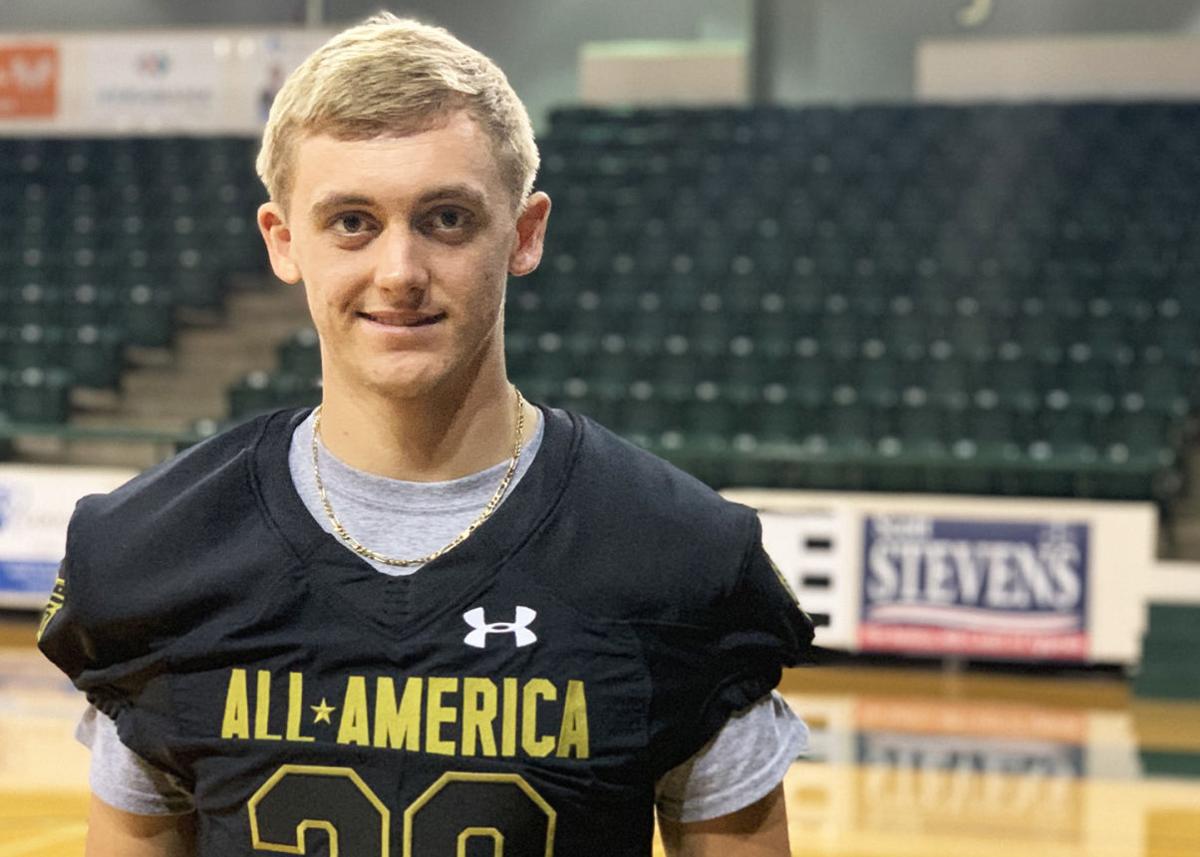 Longview quarterback Haynes King poses for a photo at Lobo Coliseum during a jersey presentation for his selection to the Under Armour All-America Game. 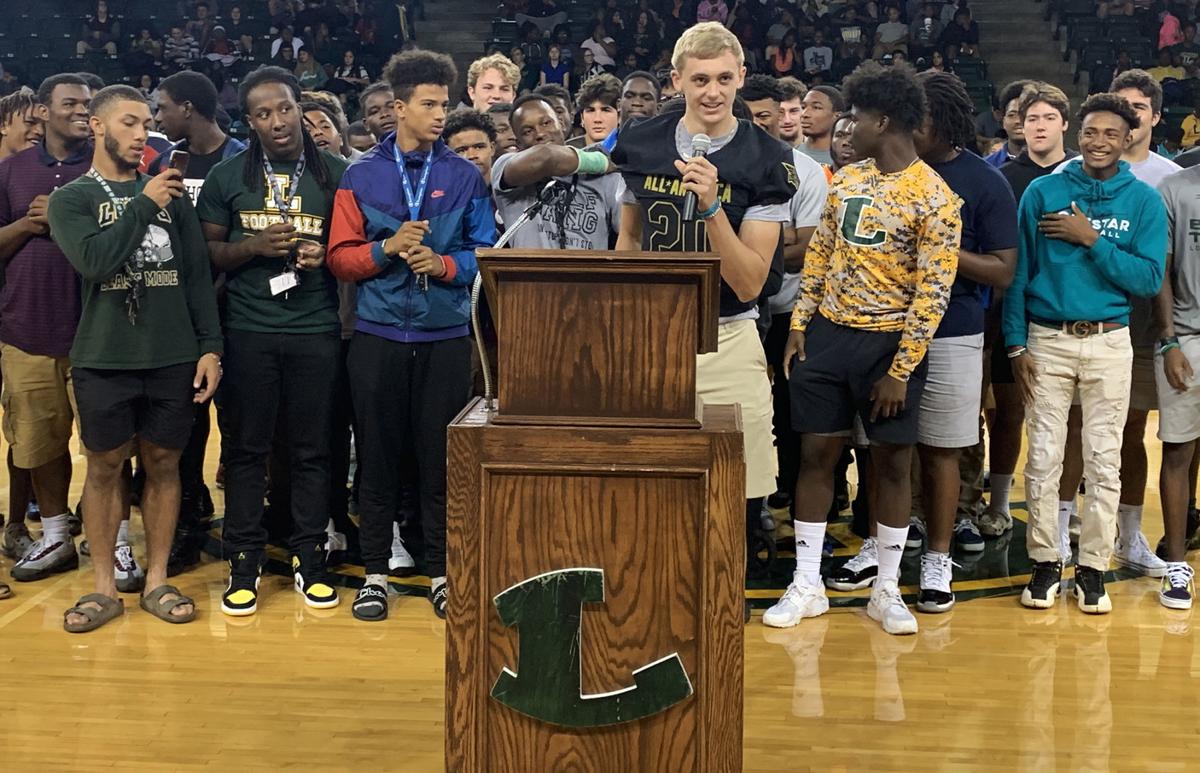 Longview quarterback Haynes King speaks during a jersey presentation for his selection to the Under Armour All-American game on Thursday at Lobo Coliseum. 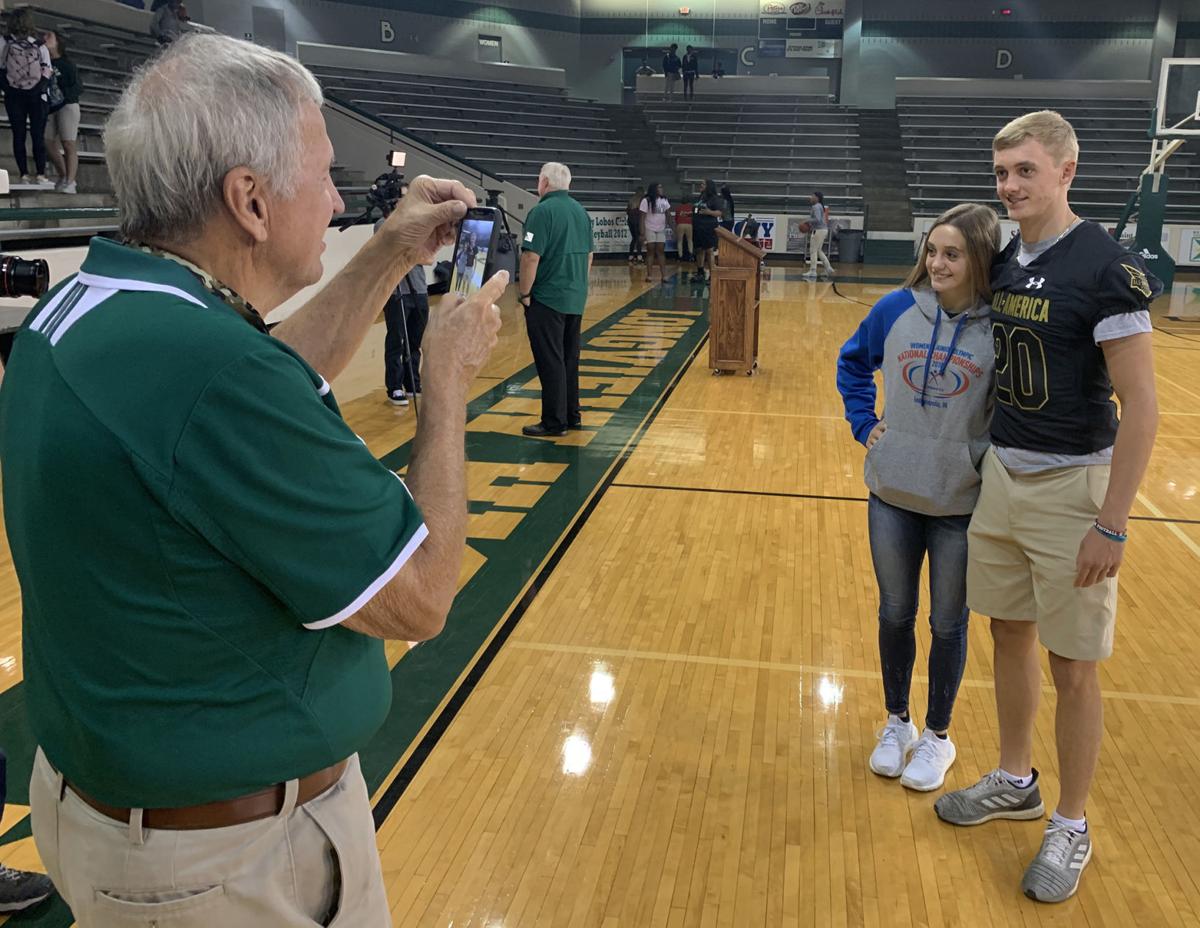 Wayne King takes a photo of his grandchildren, Longview quarterback Haynes King and sister Steelie King, during a jersey presentation for his selection to the Under Armour All-American game on Thursday at Lobo Coliseum.

Longview quarterback Haynes King poses for a photo at Lobo Coliseum during a jersey presentation for his selection to the Under Armour All-America Game.

Longview quarterback Haynes King speaks during a jersey presentation for his selection to the Under Armour All-American game on Thursday at Lobo Coliseum.

Wayne King takes a photo of his grandchildren, Longview quarterback Haynes King and sister Steelie King, during a jersey presentation for his selection to the Under Armour All-American game on Thursday at Lobo Coliseum.

Less than five minutes after being presented with his jersey commemorating his selection to the 2020 Under Armour All-America Game, King and his teammates raced over the hill from Lobo Coliseum and hit the field at Lobo Stadium for practice.

“Being surrounded by my teammates is everything,” King said. “I really wouldn’t be here without all of them.

“Just growing up watching all of the All-American games on TV, to actually be a part of it is really special.”

The little things was the focus of Thursday’s open-week practice. Those were the things that it was going to take for the defending state champion Lobos. At 5-0 on the year, the words potential and improvement were used.

“I think this team has the potential to be great,” King said. “Through this open week, we’ve worked on being more consistent with the little things.

“Those are the things that lead to great things and as long as we can keep working on that and our discipline, we have the chance to keep improving as a team.”

Longview is out to a 5-0 start on the year and holds the state’s longest active win streak. Backed by solid start from the Lobo defense, the offense has had its up and downs at times.

“We had a few questions coming into the year and we probably tried to do too much, too early,” King said. “At the end of the day, there are a lot of ways to win a football game and we’re figuring that out.

Through it all from December 2018 until now, the Lobos have gone about it in the spotlight. From King’s participation in the Elite 11 over the summer to his decision to commit to Texas A&M to the cameras of ESPN against John Tyler to Dave Campbell’s being in town for a feature on the team, it’s been a matter of focus for the Lobos.

“I think we’ve handled it all well,” King said. “This team is focused on what is front of us right now, not about last year, not about later this year.

“That comes back to discipline. Our coaches preach that, to have the discipline to not get into all of that where it gets the best of you. As long as we keep doing that, we’ll keep improving. (Longview strength) Coach (Cade) Carnett always talks about handling adversity and have you’ve got to embrace the hard times and the good times. You’ve got to embrace it but not let it affect you.”

King recently moved to 31-1 as the starting quarterback for the Lobos in a 49-3 win over Rockwall to open District 11-6A action. The Aggie commit finished with a career-high six touchdowns, including five rushing scores. King finished with 93 yards on six carries, giving him 1,000 career rushing yards and a 8.8 yard-per-carry mark.

King is 52-of-98 for 608 yards with three touchdowns this season and has 210 rushing yards and seven touchdowns.

The 2020 Under Armour All-America Game is set for Thursday, Jan. 2, 2020, at Camping World Stadium in Orlando, Fla. and will be televised live on ESPN2, marking the last game as a high school player and the last game with his father, John, on the sidelines as a coach.

Longview resumes the 2019 season on Oct. 11 at Mesquite Horn.