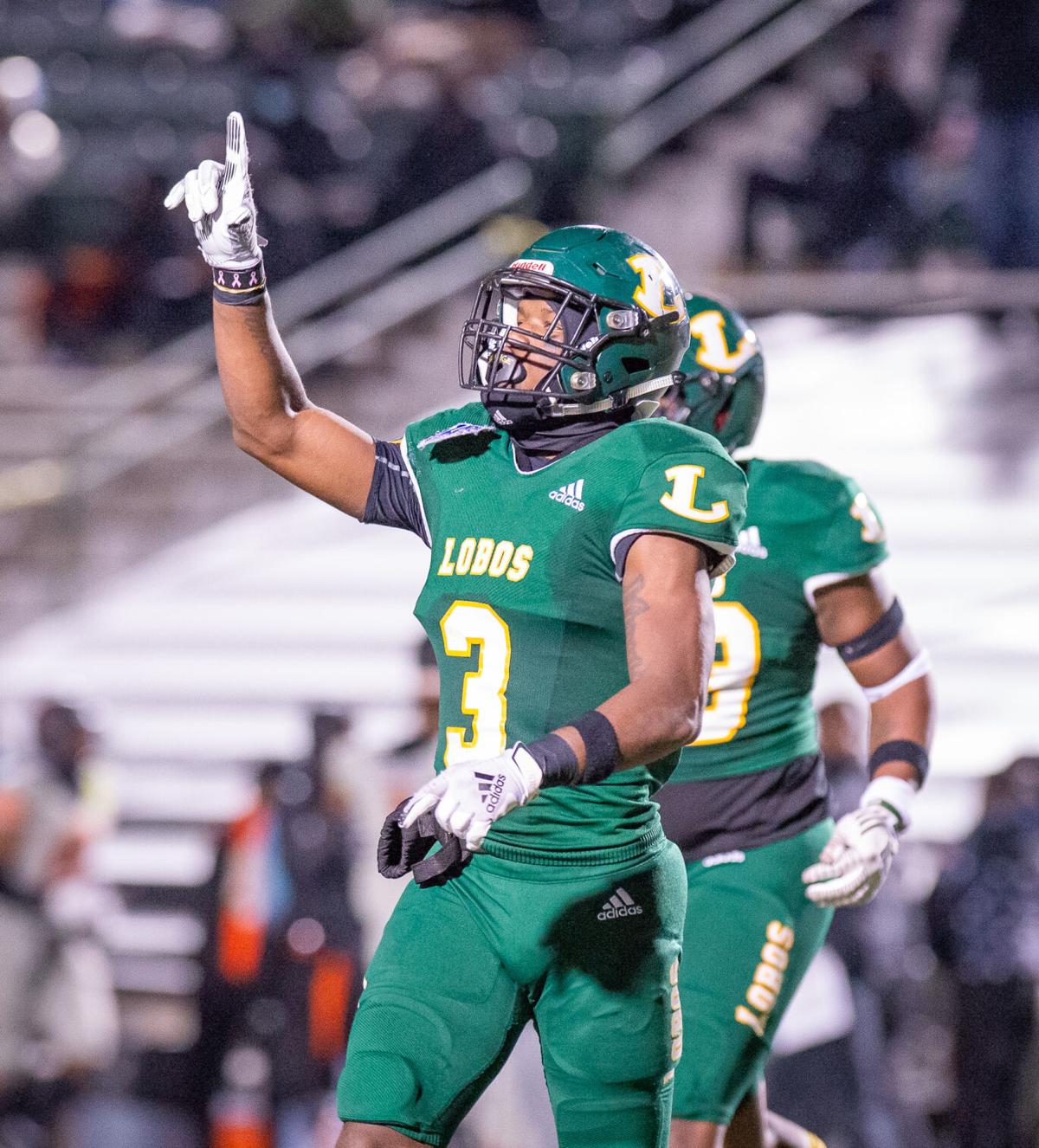 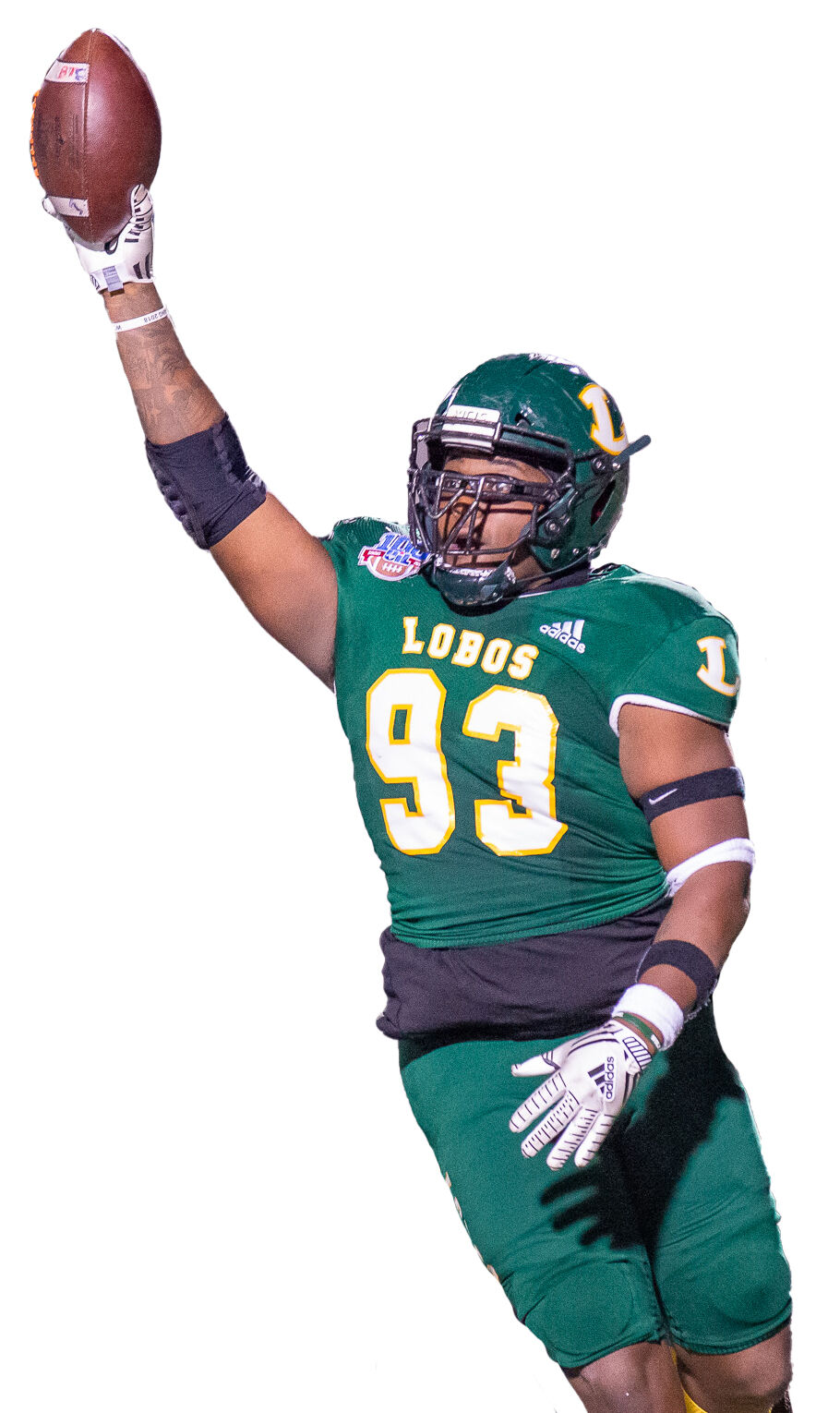 RIGHT: Longview’s Joe Jones recovers a fumble against Lancaster on Friday in Mesquite.

RIGHT: Longview’s Joe Jones recovers a fumble against Lancaster on Friday in Mesquite.

Someone called them underdogs last week and whether that played a factor or not, the Lobos delivered a prototypical playoff performance in all three phases.

Behind a big night defensively, the Lobo offense got going and the kicking game was solid in a big win over No. 3 Lancaster in the area round.

“You talk about the things it takes to win a playoff game — big plays at the right time, taking advantage of opportunities, limited mistakes — and we were able to do all of those things,” Longview head coach John King said. “We took advantage of their mistakes, we were able to run the ball with some tough yards, were solid in the kicking game and the defense played well.

“Great team effort and that’s how you win a playoff game against a good opponent.”

And now, both that underdog role and needing a crisp showing all over the field is amplified as the Lobos (9-2) began work on its next opponent in No. 1 Denton Ryan, who checks into Saturday’s Class 5A, Division I, Region II semifinal at 11-0. Kickoff is set for 2 p.m. at Memorial Stadium in Mesquite.

“We’re playing a team that’s ranked No. 1 for a reason,” King said. “They’ve dominated their opponents and beat Martin, who is still in the playoffs in 6A. They beat Guyer, who is still alive. Those are impressive wins and they did it convincingly. We’ve got our hands full.”

Ryan checks in with a star-studded roster, led by 247Sports 5-star Ja’Tavion Sanders, a Texas signee, and 4-star Billy Bowman, who joined a long list of Raiders to ink on early signing day.

The Raiders come in averaging 49.1 points and 526.7 yards per game, including 293.6 passing from Memphis commit Seth Henigan, the son of Ryan head coach Dave Henigan.

“It starts with the quarterback, a coaches kid, and of course, Sanders and Bowman, who are great talents,” King said. “They’ve gotten better running the ball lately and that’s helped them too.

“When they’re balanced and running the ball, it’ll definitely keep you honest. They’re going to throw the smoke screen and bubbles. Defensively, just solid with two linebackers that are probably tops in the state.”

Longview running back Kaden Meredith turned in his fourth consecutive 100-yard night on the ground against Lancaster and his two touchdowns gives him 27 total this season, one behind the school record of 28 from Jessie Anderson, according to Lobo football historian Bill Simpson of LoboHistory.com

Defensively, the Lobos were in a frenzy behind a strong night from the defensive line. Jahkamian Carr finished with 11 tackles, four tackles for loss and three sacks to lead a unit that went for 20 tackles, seven tackles for loss, four sacks, two forced fumbles, three fumble recoveries and a defensive score, collectively.

“They’re playing well together and having fun, that’s what you’re supposed to do,” King said of his defense. “It’s not one guy, it’s 11 that are swarming to the ball. It’s one of those things where you don’t put your best 11 players out there, you put your best 11 as a group and that’s what we have. We’ve got different roles, different roles and are playing 17 guys defensively pretty regularly.”

It’ll take a little bit of everything in a big third-round showdown and a solid week of practice over Christmas, a new wrinkle for 6A/5A teams still alive in the postseason this week.

“It’s a good time and fun time to be practicing,” King said. “We’re working and there’s work to be done — the kids definitely understand that — but you want it to be fun. We need the best week of practices that we’ve had to get ready.

“Then we’ll go play the game.”