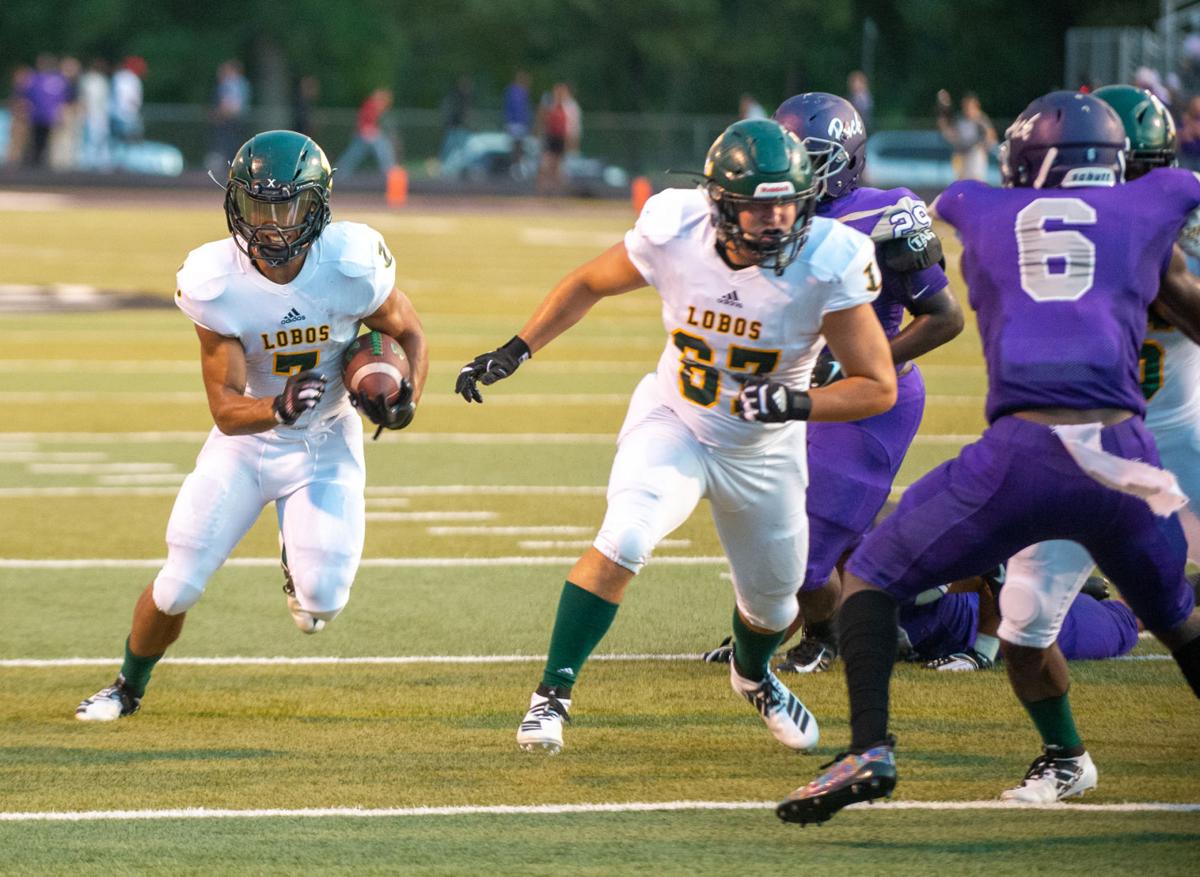 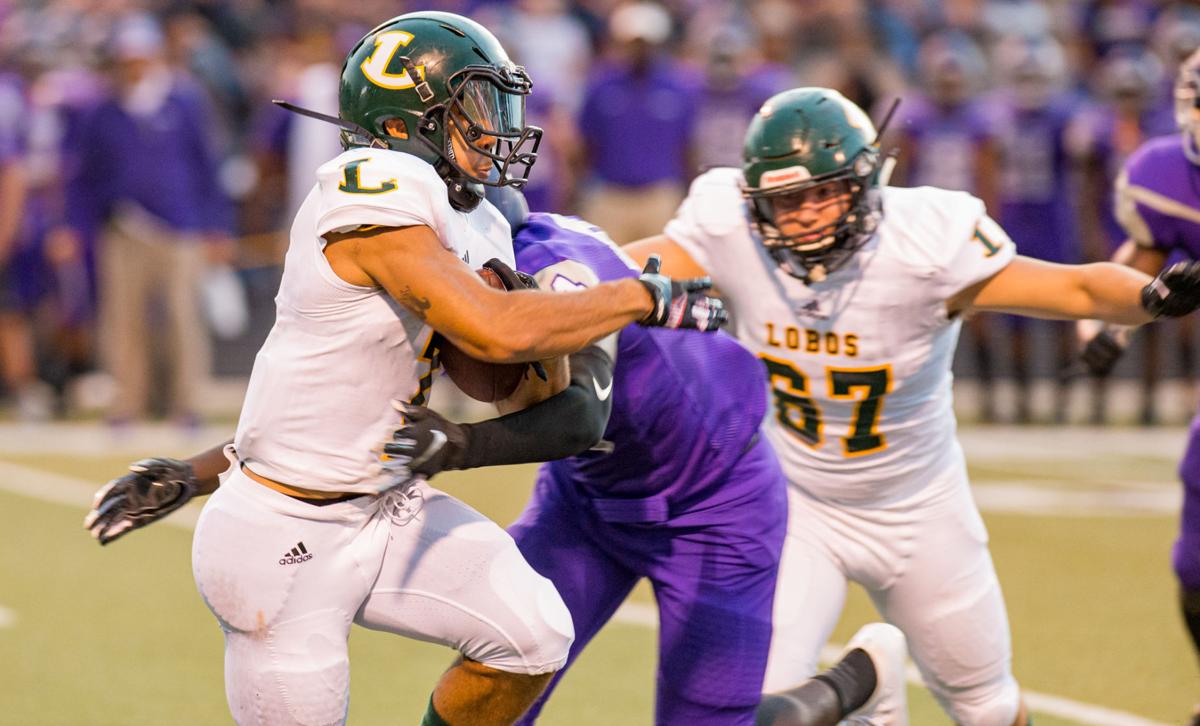 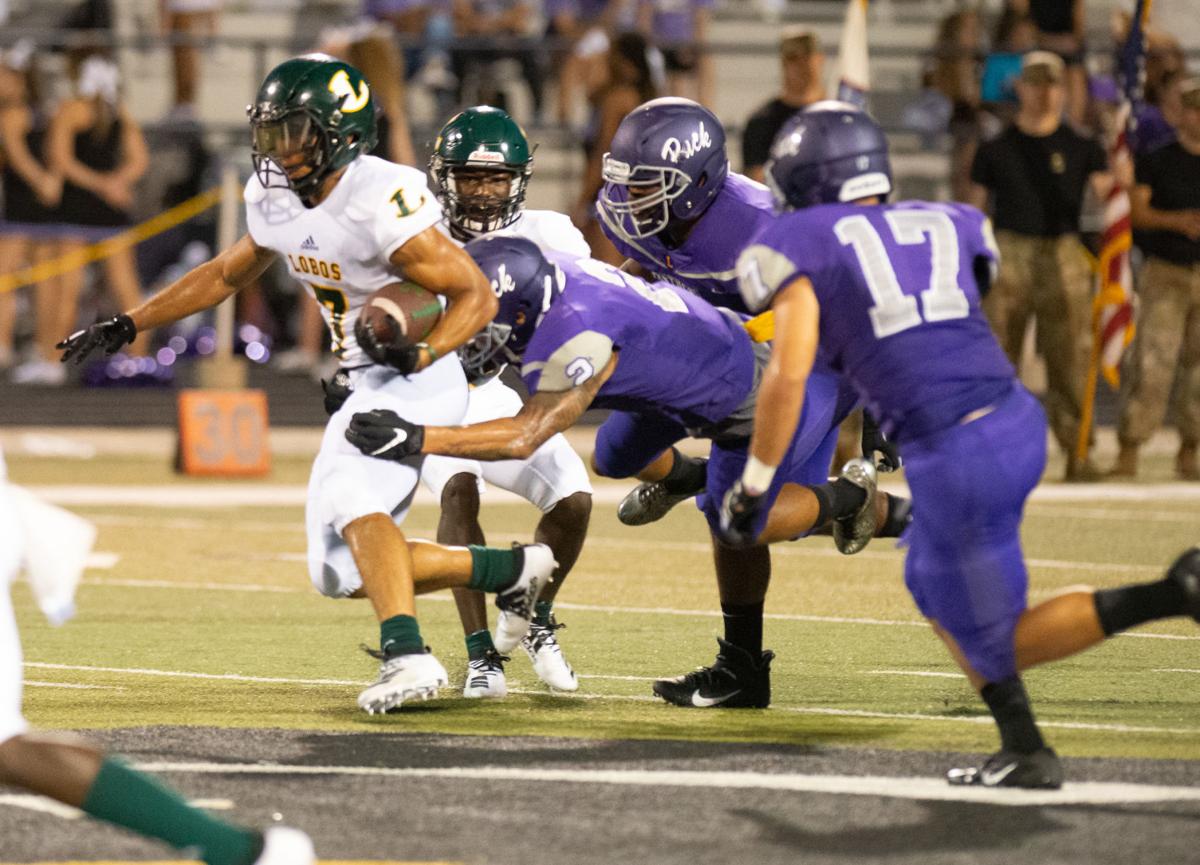 Longview’s Kaden Meredith runs against Lufkin in August 2019 at Abe Martin Stadium in Lufkin. The Lobos open the postseason against the Panthers at 7:30 p.m. Friday at Lobo Stadium. See all of the playoff pairings on Page 2B.

Longview’s Kaden Meredith runs against Lufkin in August 2019 at Abe Martin Stadium in Lufkin. The Lobos open the postseason against the Panthers at 7:30 p.m. Friday at Lobo Stadium. See all of the playoff pairings on Page 2B.

John King ended Monday’s practice going through some history, both the highlights and lowlights, from the numerous times the Lobos and Lufkin Panthers have squared off.

While King had a long list of things to speak on, a few key components, no matter the magnitude of any particular game, always remained the same.

“Twenty-five times in 18 years, that’s a long history, some good and some bad,” King said. “I say it every time and it’s still so true, these are two programs, two towns that mirror each other. Tough East Texas kids, proud communities and two programs that have had winning traditions for a long time.

So here it goes again, Longview against Lufkin to open the Class 5A, Division I playoffs at 7:30 p.m. Friday night at Lobo Stadium. It’s the fourth postseason meeting in the past six years between the two teams and 84th meeting overall.

Familiarity runs deep and with it comes respect, King said.

“It’s been an intense rivalry but there has been a lot of respect both sides, win or lose, because of how hard our kids compete and the way they play the game,” King said. “Of course we talk football but from middle school on up, it’s been a deal where our kids have competed against Lufkin whether it’s football, basketball, volleyball, track, whatever, where it’s been a mainstay year-in and year-out.

“We’ve tried to take care of each other when it comes to scheduling because we know how tough that can be. It’s always been an agreement that we’ve had and that dates back to Pat Collins and John Outlaw. We’ve carried that on, Todd Quick and I, since we both took over.”

No. 84 was originally set to be a non-district game this season before the Panthers were placed in a nine-team district and the scheduling didn’t work out. The two teams didn’t play in the regular season in 2004 but met in the postseason. In 2005, they scrimmaged.

One win came via forfeit to Cleveland and the Panthers closed out the regular season with convincing wins over Caney Creek and Waller.

“They had a rash on injuries, some inexperience at spots and had to replace key players on both lines,” King said. “They bring in a three-year starter at quarterback in Jordan Moore, who started against us in a TV game as a sophomore in 2018, and he’s matured into a seasoned veteran, a guy that can run it, throw it and an experienced leader. They’ve asked him to do a lot more throughout the season, particularly after losing a Division I running back.

“You watch them in that first game against Legacy and then over the past few weeks and they’ve come miles. They’re believing in the process and they’re so much better than they were 10 weeks ago. I think Coach Quick can say the same about us.”

King went back to the history of the series and another anecdote that rings true in that none of those numbers really matter in this one.

“This is nothing new.”

■ TICKETS: General admission tickets will on sale to the public from 8 a.m. to 4:30 p.m. Wednesday and Thursday at the LHS Athletic Office and on Friday from 8 a.m. to noon. Tickets sales are credit card only.

ET Football: It's a prize fight in the first round as the Lobos host Lufkin