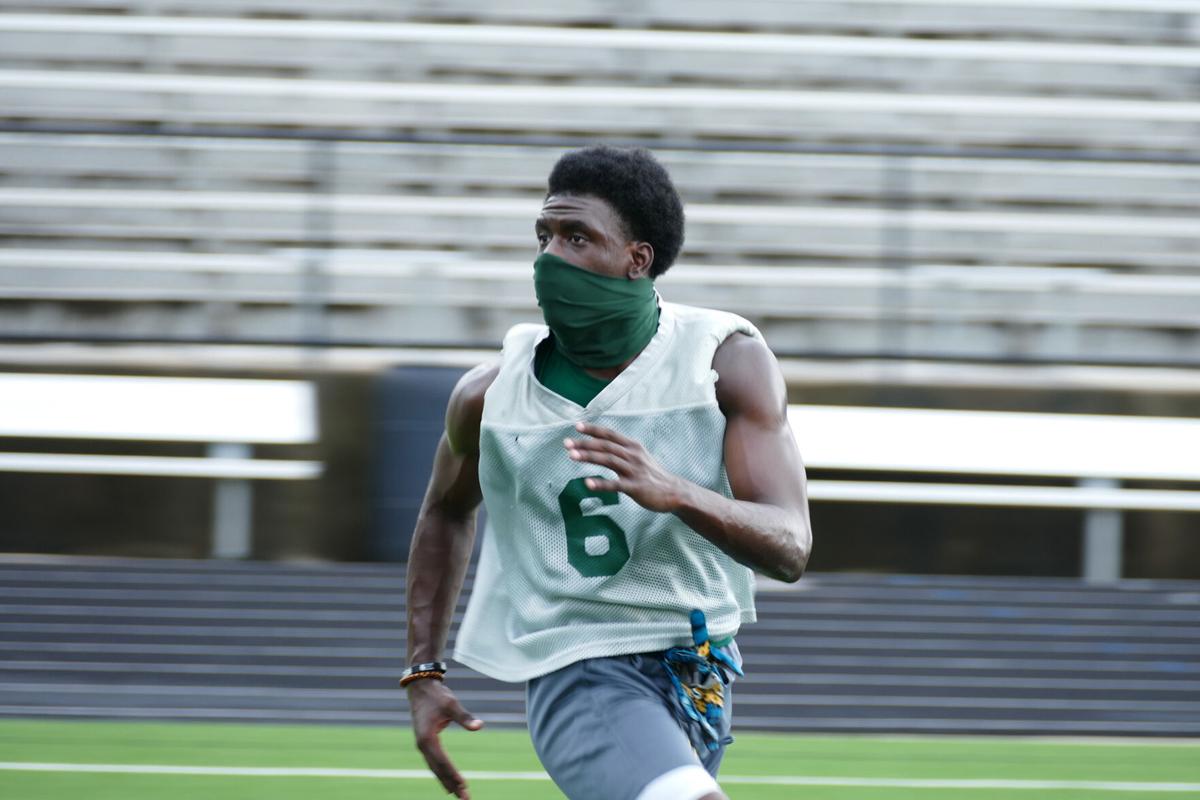 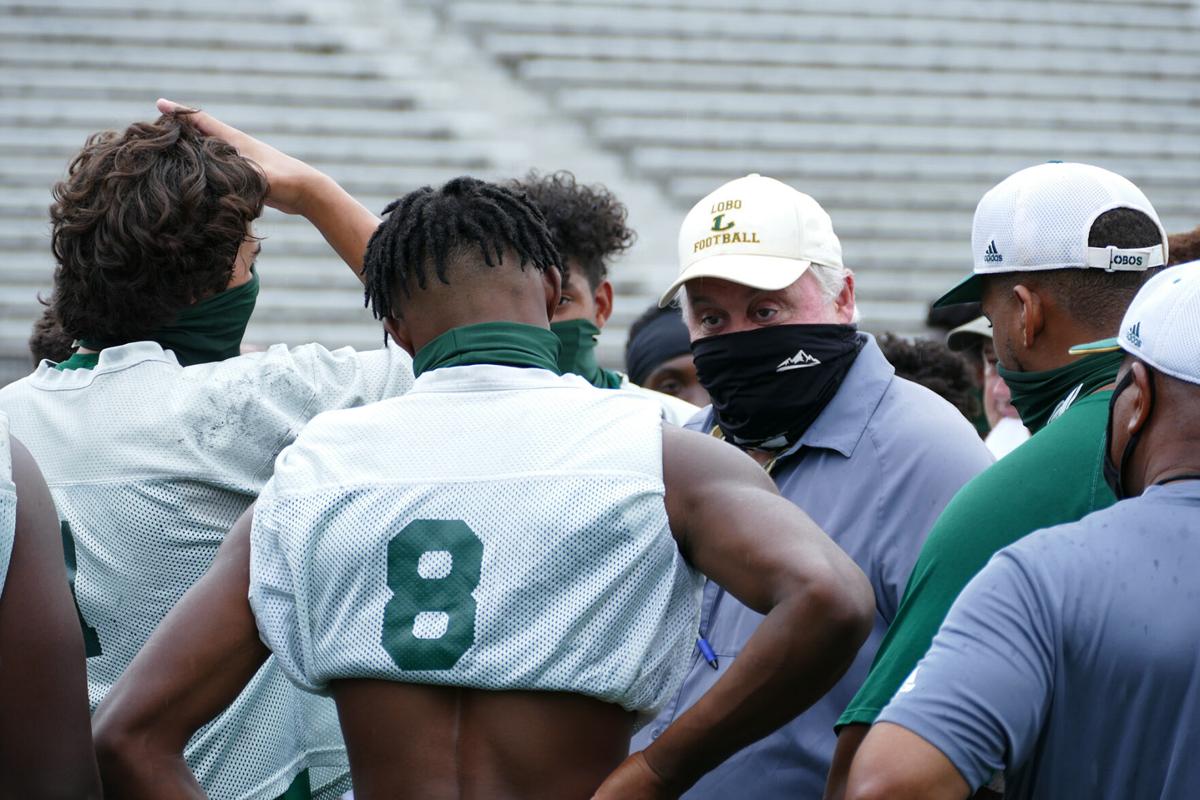 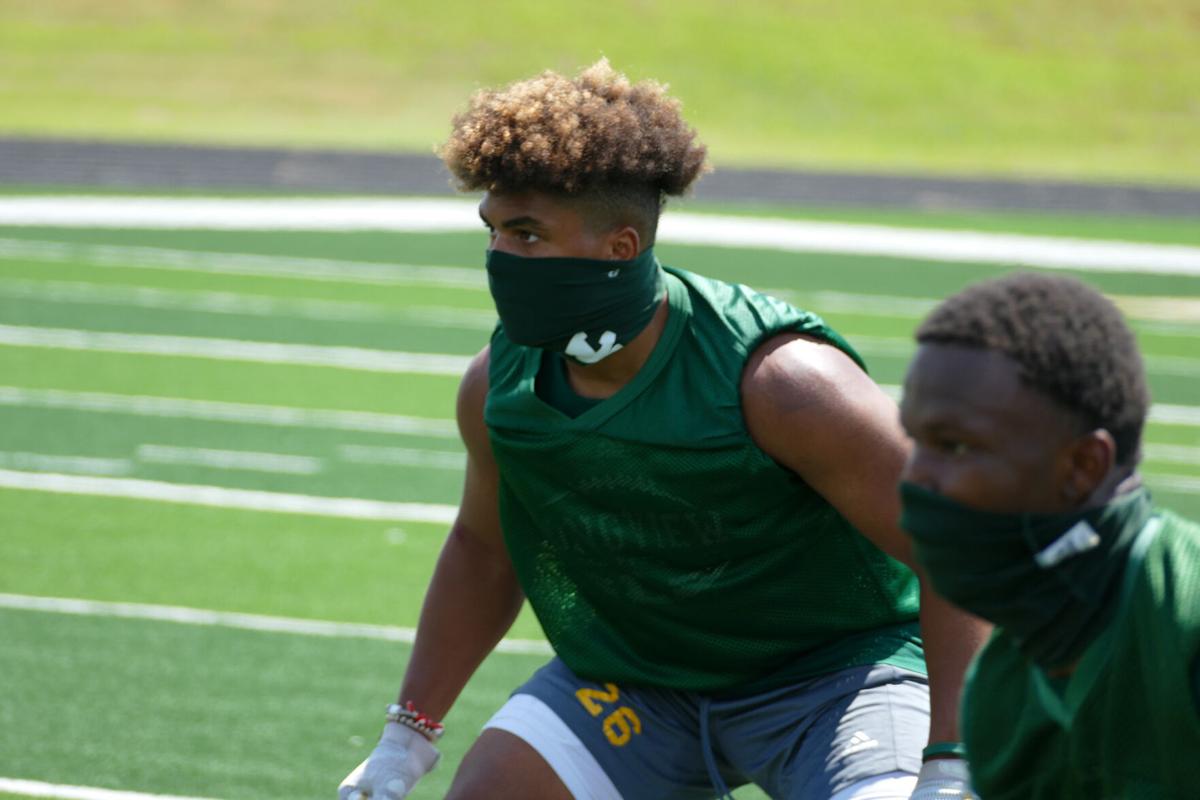 Longview linebackers Devan Isaac, left, and Kybrien Jackson-Jamerson line up during a drill at Lobo Stadium. 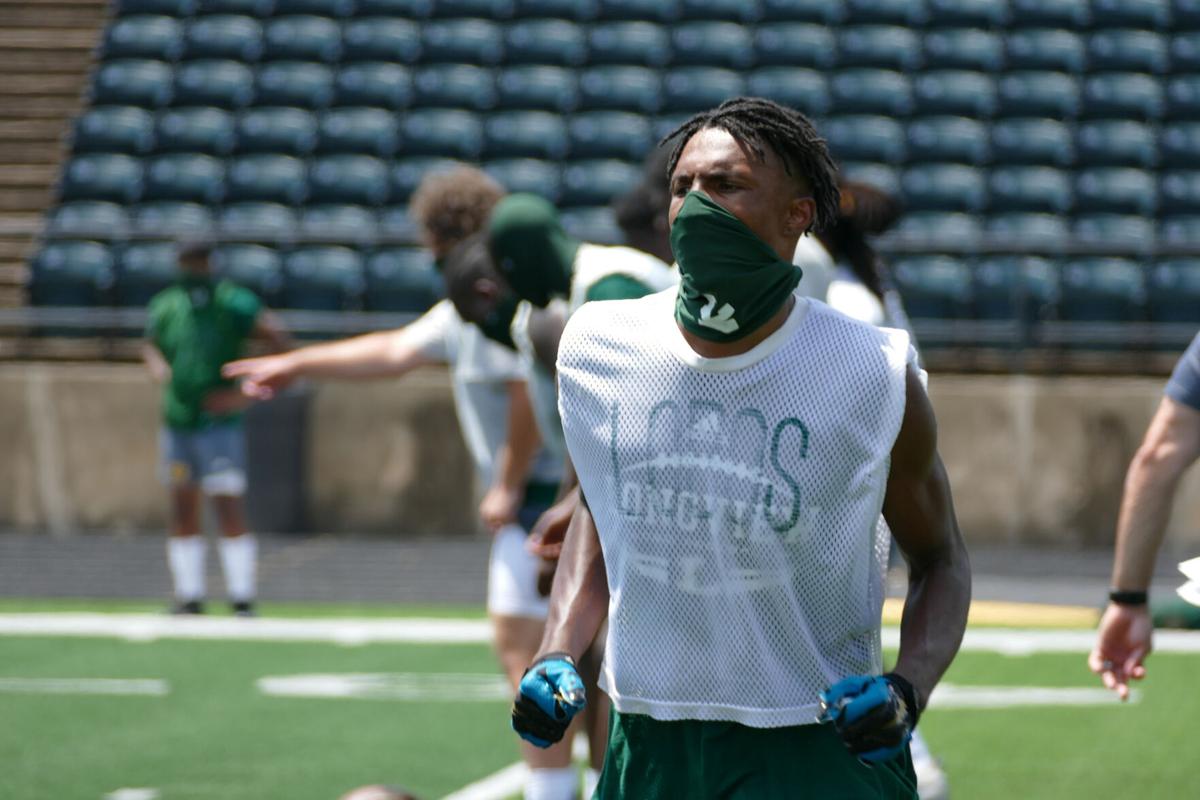 Longview receiver Jalen Hale gets ready to run a route at Lobo Stadium.

Longview linebackers Devan Isaac, left, and Kybrien Jackson-Jamerson line up during a drill at Lobo Stadium.

Longview receiver Jalen Hale gets ready to run a route at Lobo Stadium.

Energy and anticipation was high. Fox Sports Southwest was in town shooting promotional material. Lobo head coach John King was ready to answer some questions on the offensive and defensive lines.

It was the typical week before practice in a number of ways and different in so many others.

Longview, along with Class 6A and 5A programs across the state, take a step toward normal on Monday as preseason practice officially after a month-plus delay due to the coronavirus pandemic.

“I hope they’re excited on Monday,” King said. “There’s usually a lot of excitement and I hope that’s true this year. They’ve earned that right to be excited.

“We were ready to get started then got pushed back but there’s been good energy and good work being accomplished.”

After 13 weeks away, the Lobos came back to begin workouts on June 8 and, a few weeks later, added a limited amount of football skill work to the mix. Now, on Sept. 7, practice officially begins, ending months of workouts and guidelines.

It’s tested everything — the usual of strength and conditioning, the skill work, the retention — and, even more so, patience heading into Monday.

“Patience has been tested with everything we’ve had to do since June 8, you’ve had to learn a whole new level of patience,” King said. “Patience has been key. They had to wait to start practice and the season while seeing all these other teams play and get their game stats and accomplishments in the paper.

A positive difference this year?

Longview begins practice with two weeks of work before its season-opening date live on FSSW against Temple at AT&T Stadium in Arlington with plenty of questions to answer.

“Competition everywhere,” King said. “The least amount of competition will be on who will be the starting tailback.

“Everything else is wide open.”

Kaden Meredith leads the charge back on offense for the Lobos, who are building on some experience in almost every other area of the unit. Some being the key word.

Tavion Sterling is back on the offensive and King said plenty of others have been in the mix. He said five players have worked at center, both to see who will be the starter and to be ready to replace any player going out with illness, which has added another thing to consider during the COVID-19 pandemic.

“There’s some good, young talent to go with those guys too,” King said. “I feel like we’ve got a pretty good bunch and by the time it’s all said and done, they could have the chance to be one of the better groups we’ve had as a whole.”

Now who will get the ball to them is the main question as Longview enters the post-Haynes King era at quarterback.

It’s been a heavy rotation of five-to-six players, another area of competition to be the starter and to be ready to fill in at a moments notice. Senior Otarvio Buchanan joins underclassmen in sophomores Landyn Grant and Jordan Allen as well as junior Isaiah Harris in the mix.

“We’re going to continue to evaluate,” King said. “We’ve got some guys that we’re rolling in and there’s guys that are also working at another position.

“We’re going to do what’s best for the team. They’ve had positive attitudes and have done a good job of encouraging one another. There’s a number of factors and it’s not always the ‘wow’ factor, it’s a matter of making the smart decision and managing the game too.”

Speed highlights the Lobo defense, which returns experience at a few levels, Joe Jones up front and Kybrien Jackson-Jamerso and Laqualon Hale, along with Devan Isaac, at linebacker and Tyree Hale and Shannon Jackson at safety.

Antonio Onofre and Spencer Powell are both going to be ‘big assets’ to the Lobo special teams, King said.

The biggest difference this fall is the looming one, the pandemic, and safety will be at the forefront of every aspect of the season.

Longview will transition from wearing face coverings in practice to a splash guard that covers the mouth, nose and eyes in their helmets.

Lobo Stadium will be limited in capacity — roughly 2,900 of the stadium’s 10,000 seats, including the hill, will have fans. Social distancing measures will be strictly enforced, the district announced this past week.

All tickets will be general admission and those left over after performing students and their parents have had the chance to buy tickets — King estimated roughly 1,000 — will be sold on Wednesday. The games will be streamed online at www.lisd.org/lobovideo.

There will be added measures on the field of play.

“We’ve been wearing masks on the field and now will switch to the splash shield and they will wear their helmet the whole time, unless they need a breather and have to step well away from the crowd,” King said. “It’s a safety measure between us and our opponent and between ourselves on the field.

“Watching some of those games on TV, it didn’t seem like it was important to some people but it’s going to be important to us.”

The University Interscholastic League this past week announced that adhering to the set guidelines and protocols is ‘critical’ and that sanctions will come down if those rules are not enforced and followed.

“Regardless of what you think about what they’ve laid out as a plan — whether it’s the mask, the social distancing, the capacity — it doesn’t matter and that’s what we’re going to follow. They told us that we’re going to play but this is what we have to do to play. We knew the rules when we started and, by God, let’s follow them.”

Things are the same in a number of ways. Football is back and the excitement, nervousness and unknowns that comes with it are evident and, in 2020 fashion, are amplified.

But, even among the differences heading into a new season, the message remains the same.

“It’s the world we’re in right now and we’ve got to do what it takes,” King said. “All of the normal feelings are amplified. Things aren’t convenient, they’re not comfortable, they’re not what we’re used to doing but it’s what we’ve got to do. That’s football and that’s life.