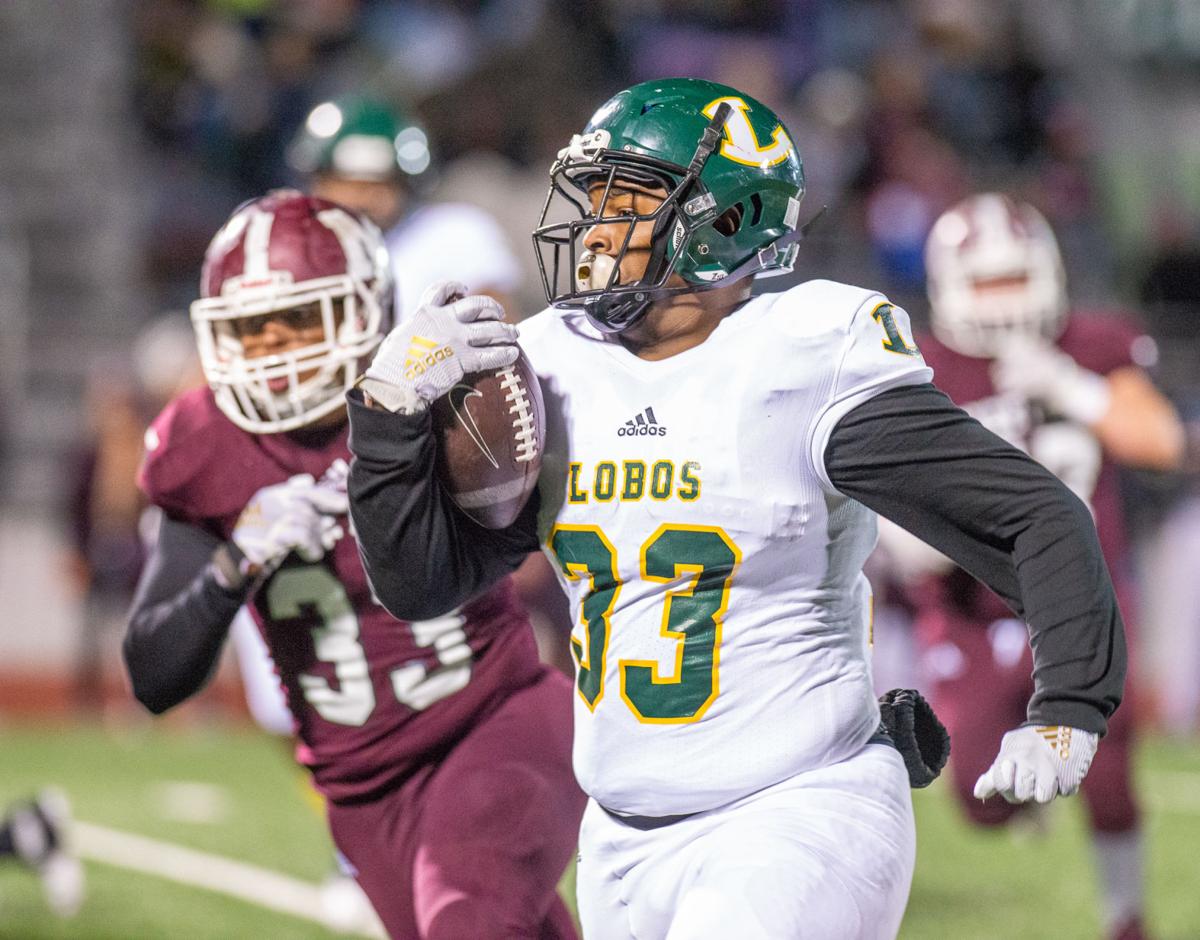 Longview's Kevin Jones charges down the field for a touchdown during Friday's November 8, 2019 game against Mesquite. (Les Hassell/News-Journal Photo) 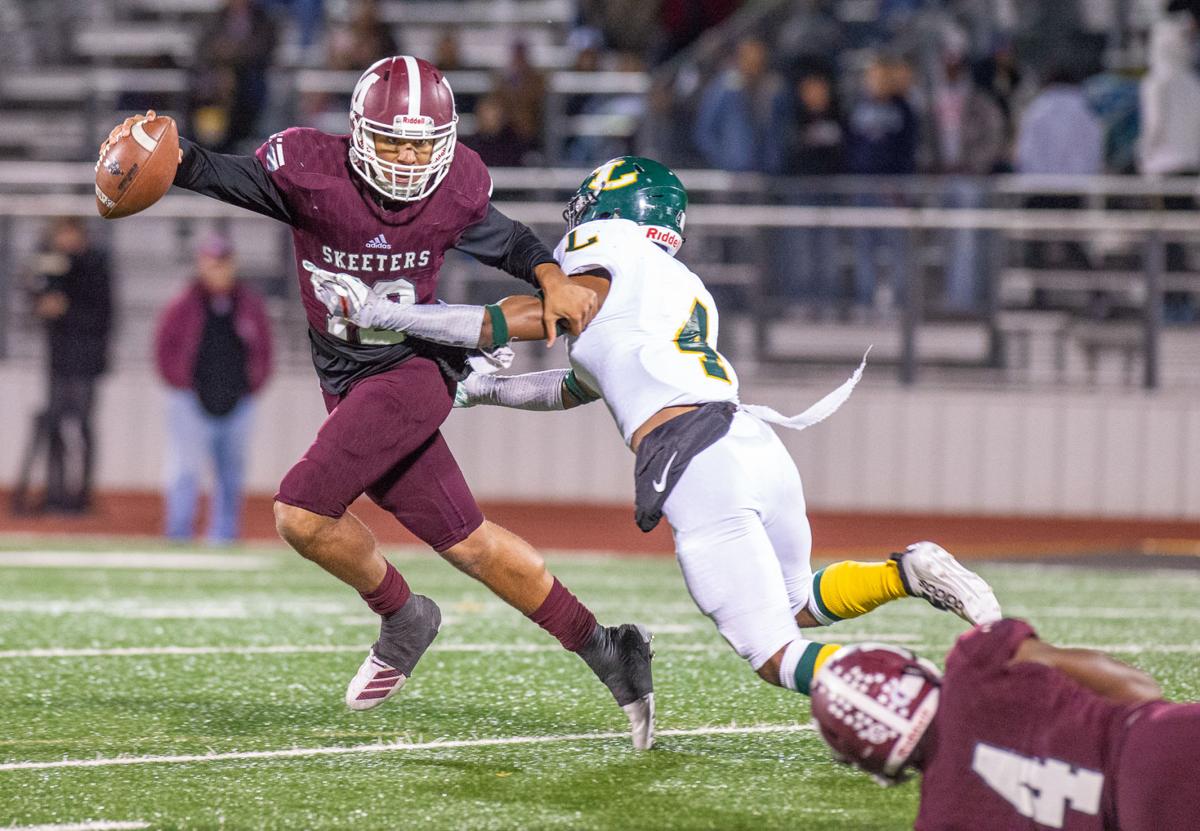 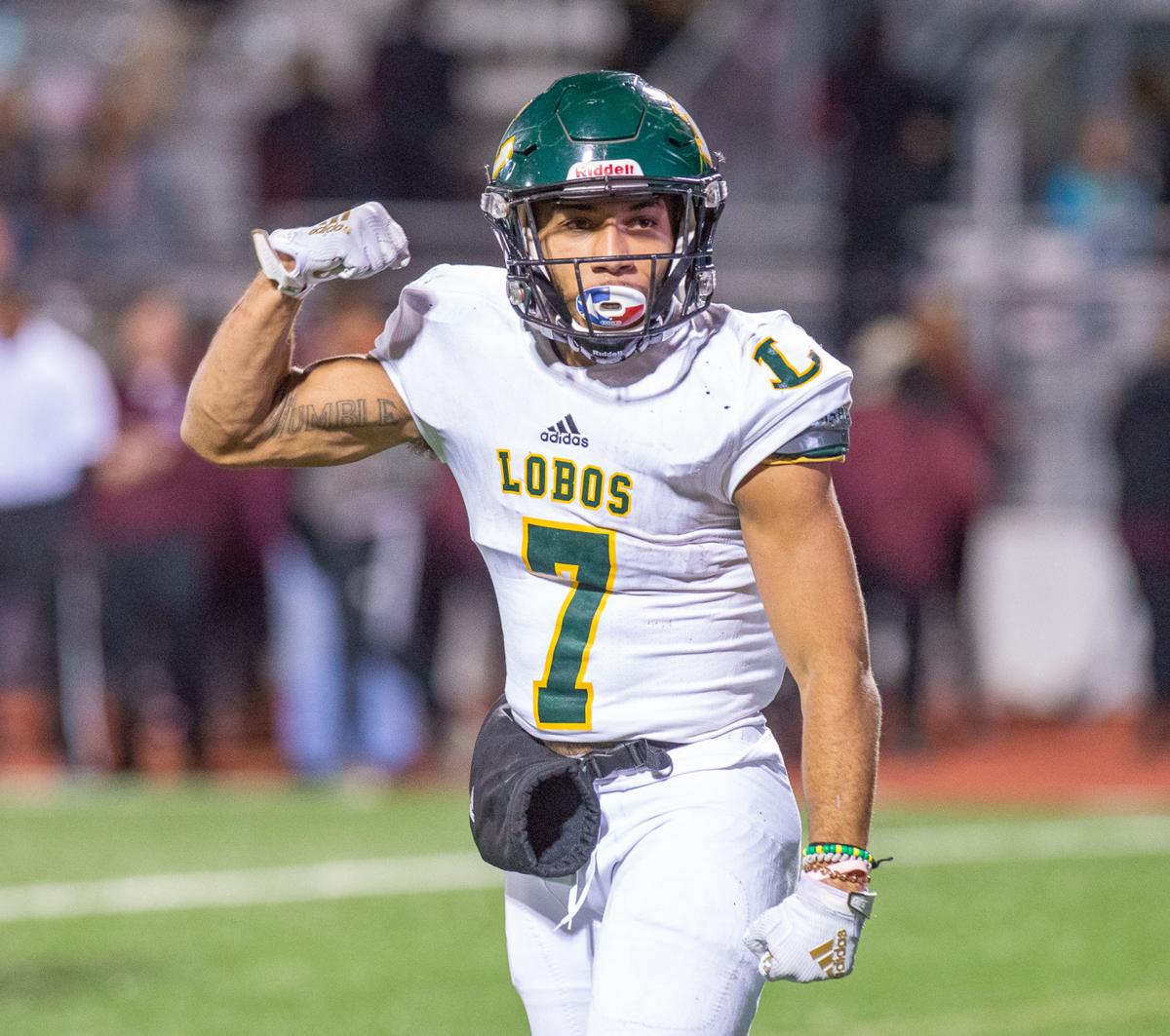 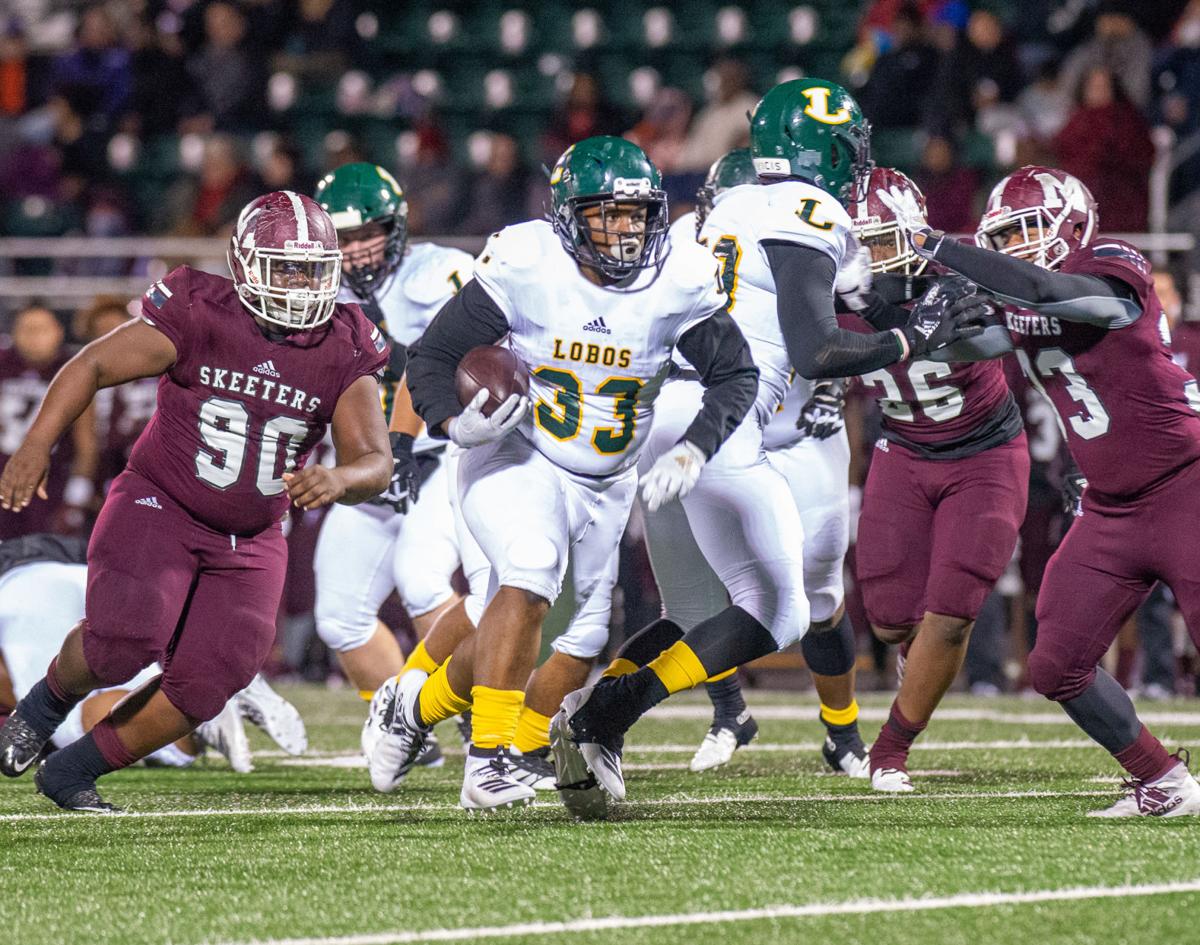 Longview’s Kevin Jones breaks through the line of scrimmage for his second touchdown of the night Friday against Mesquite. 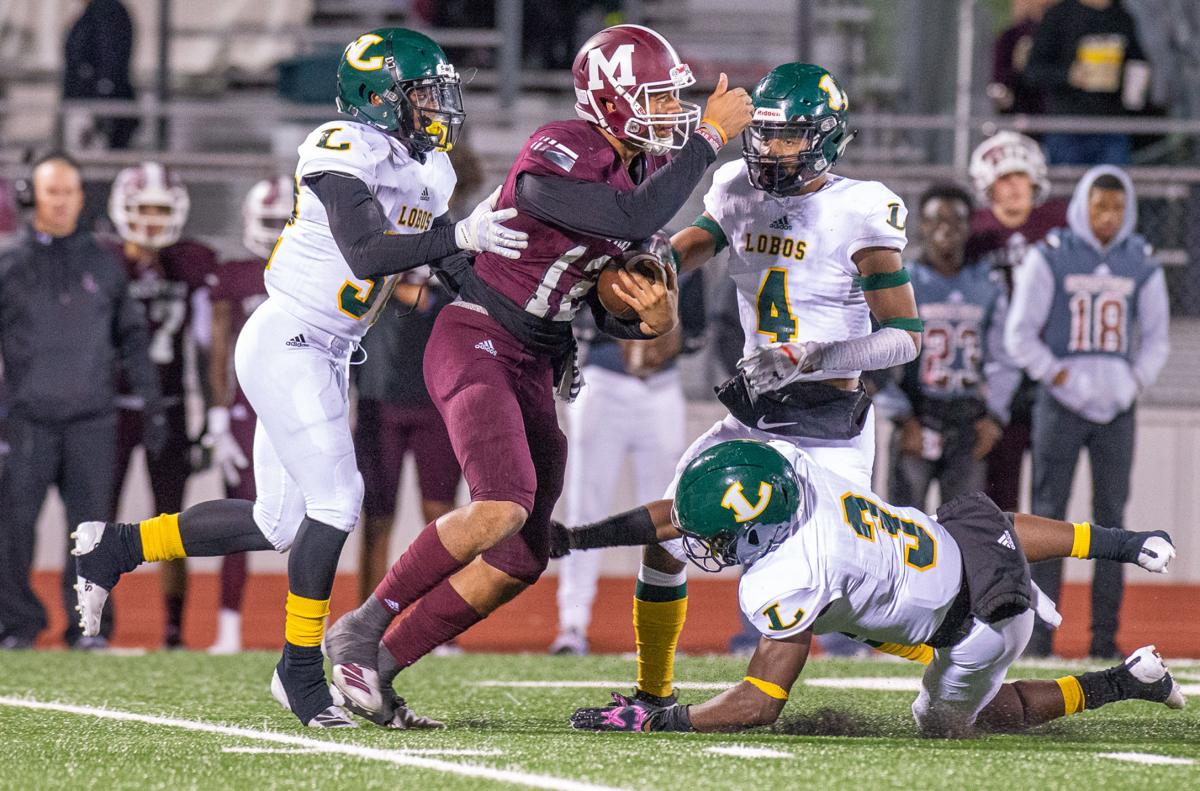 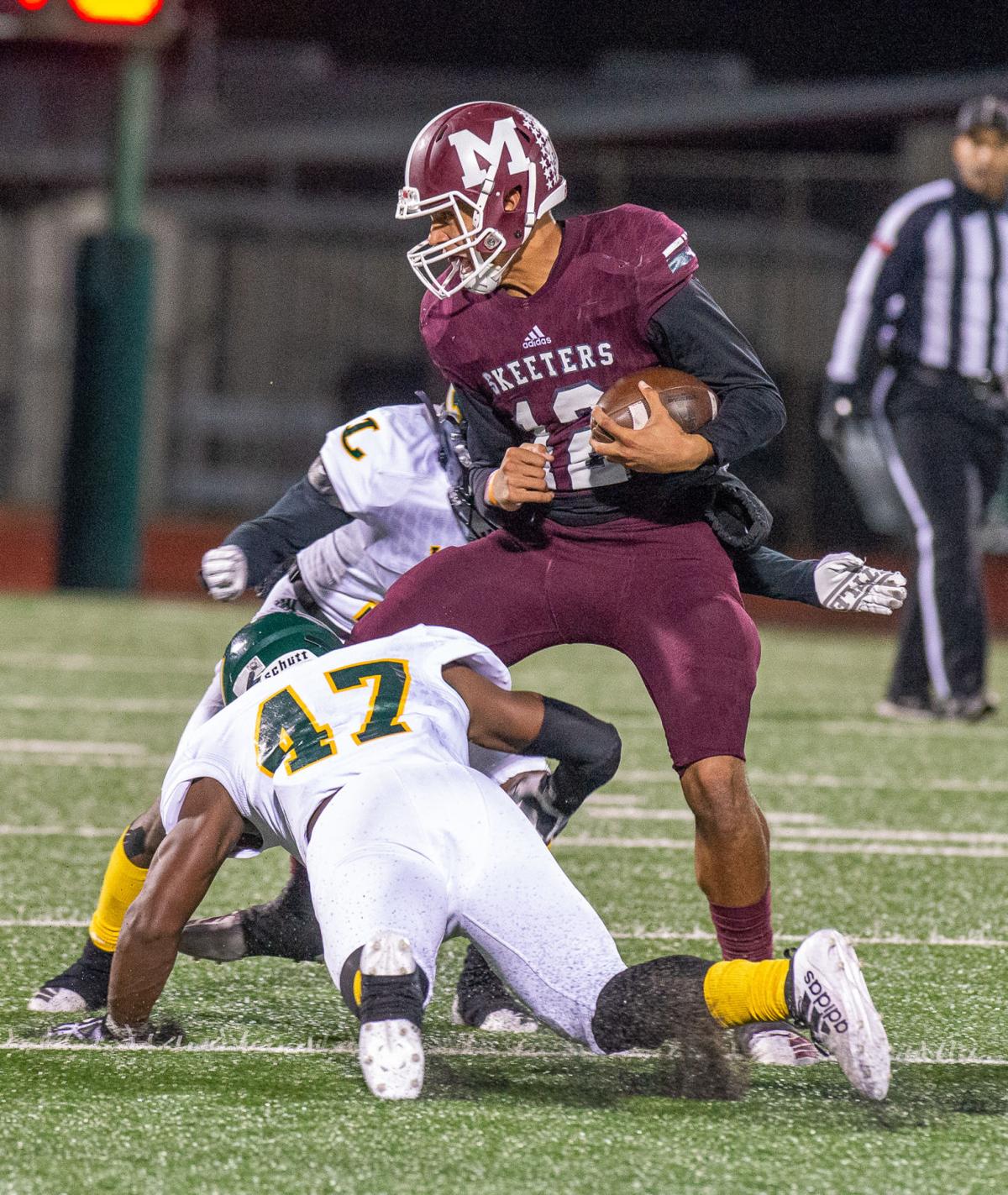 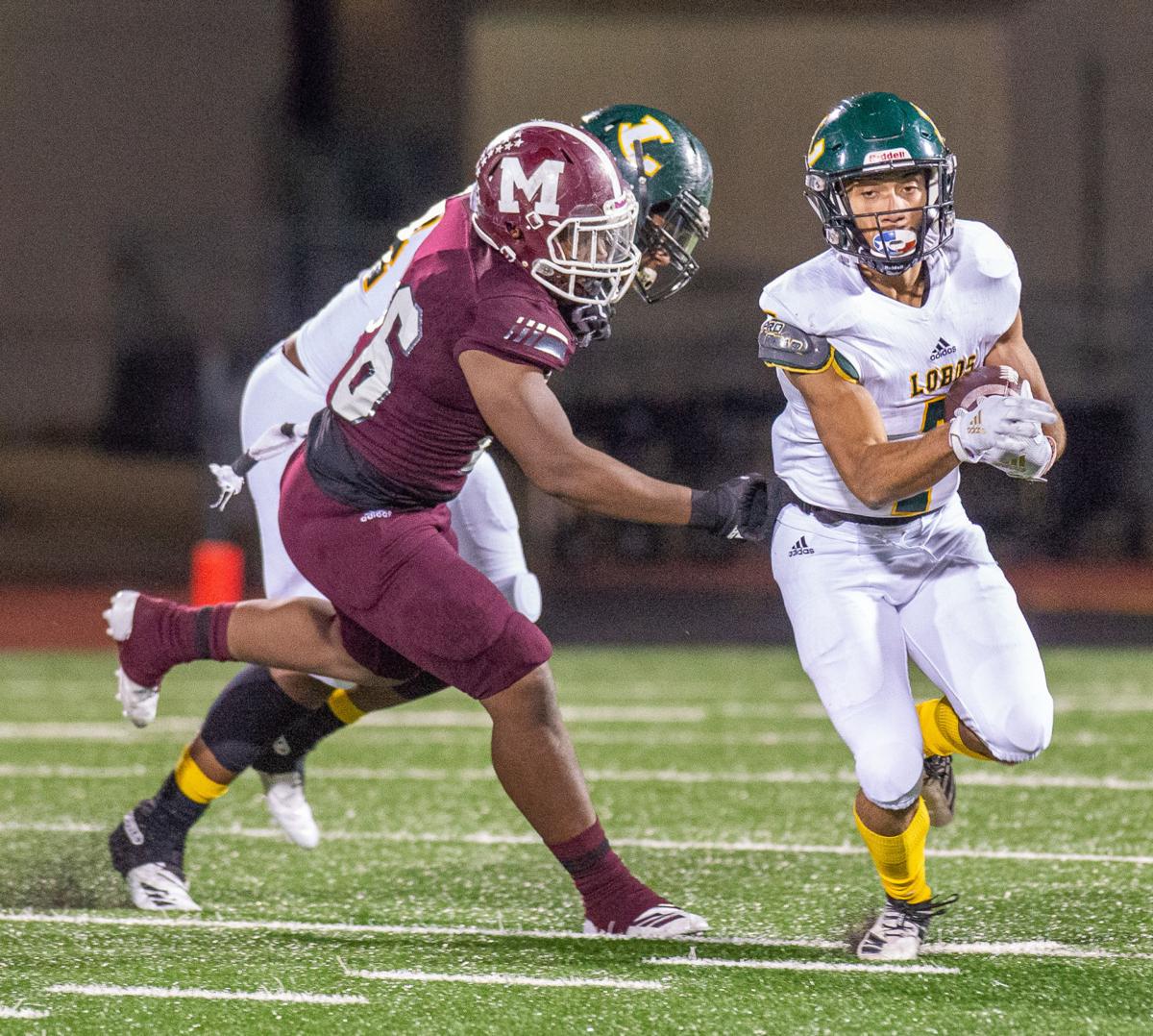 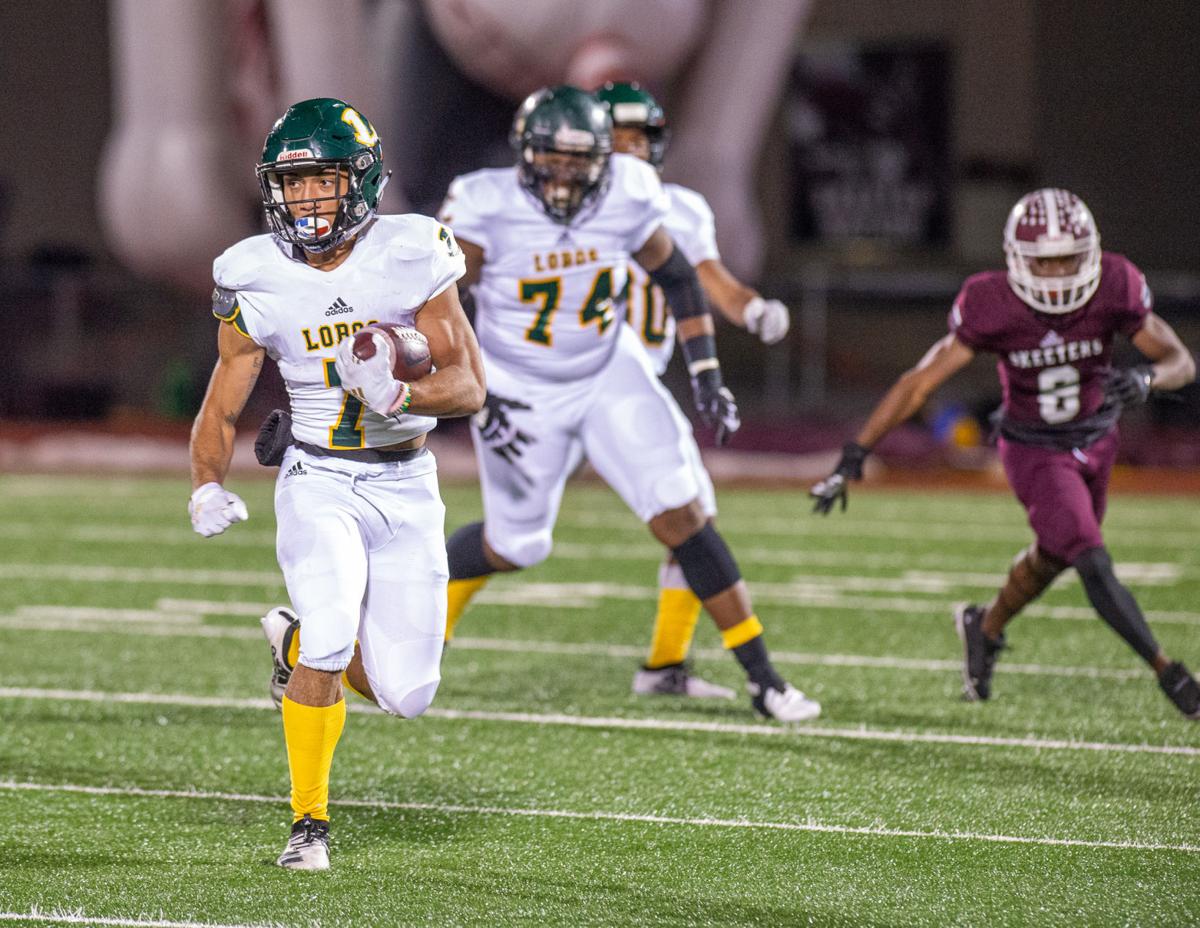 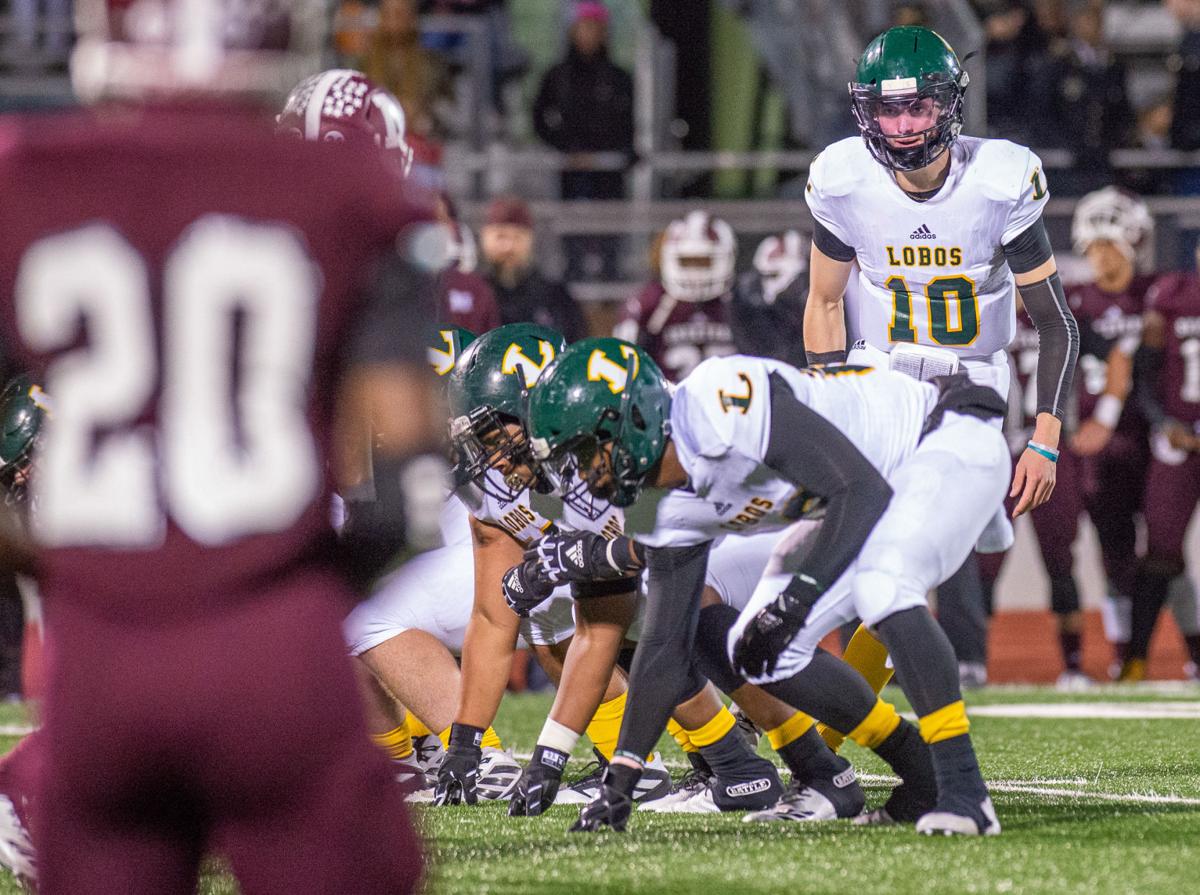 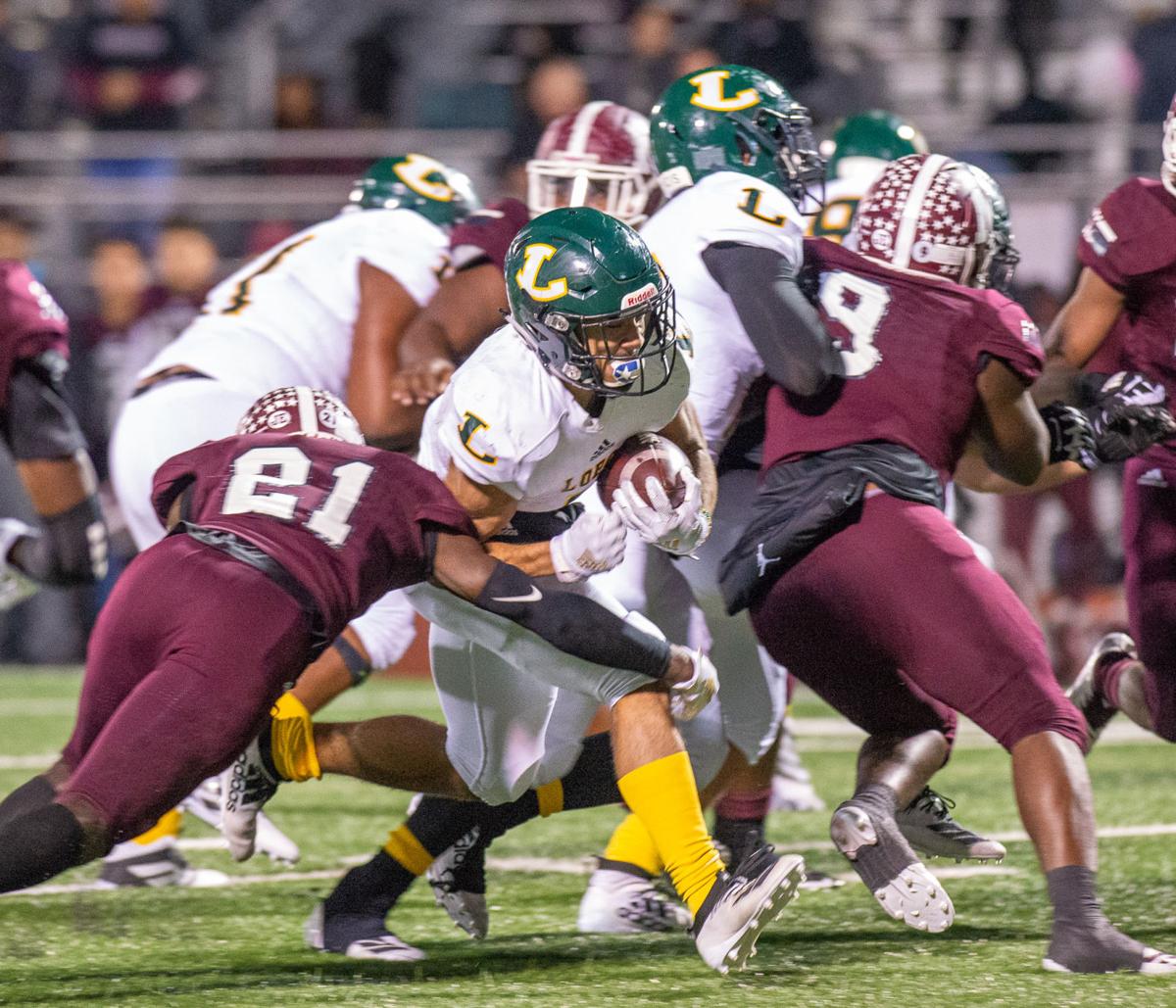 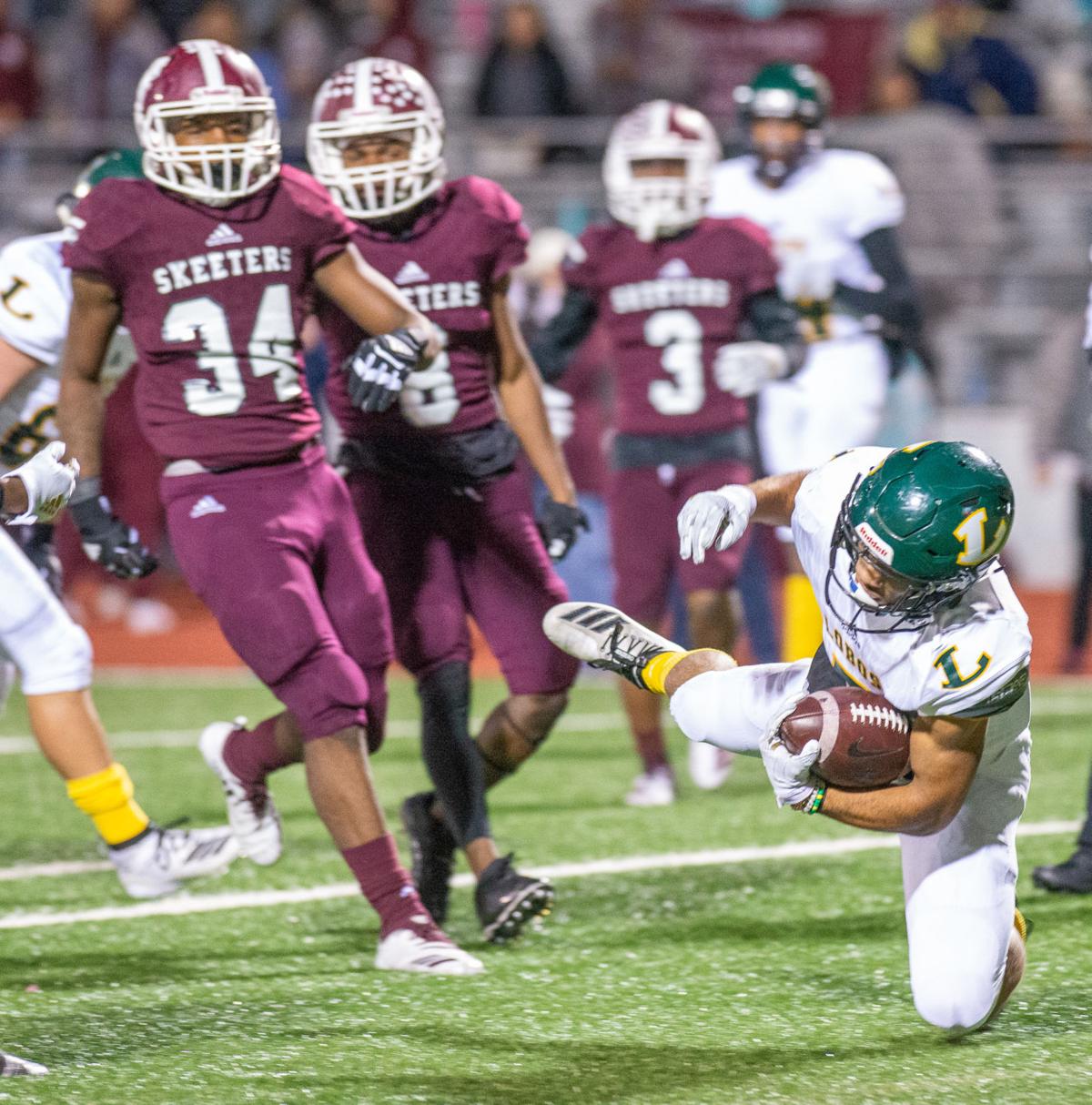 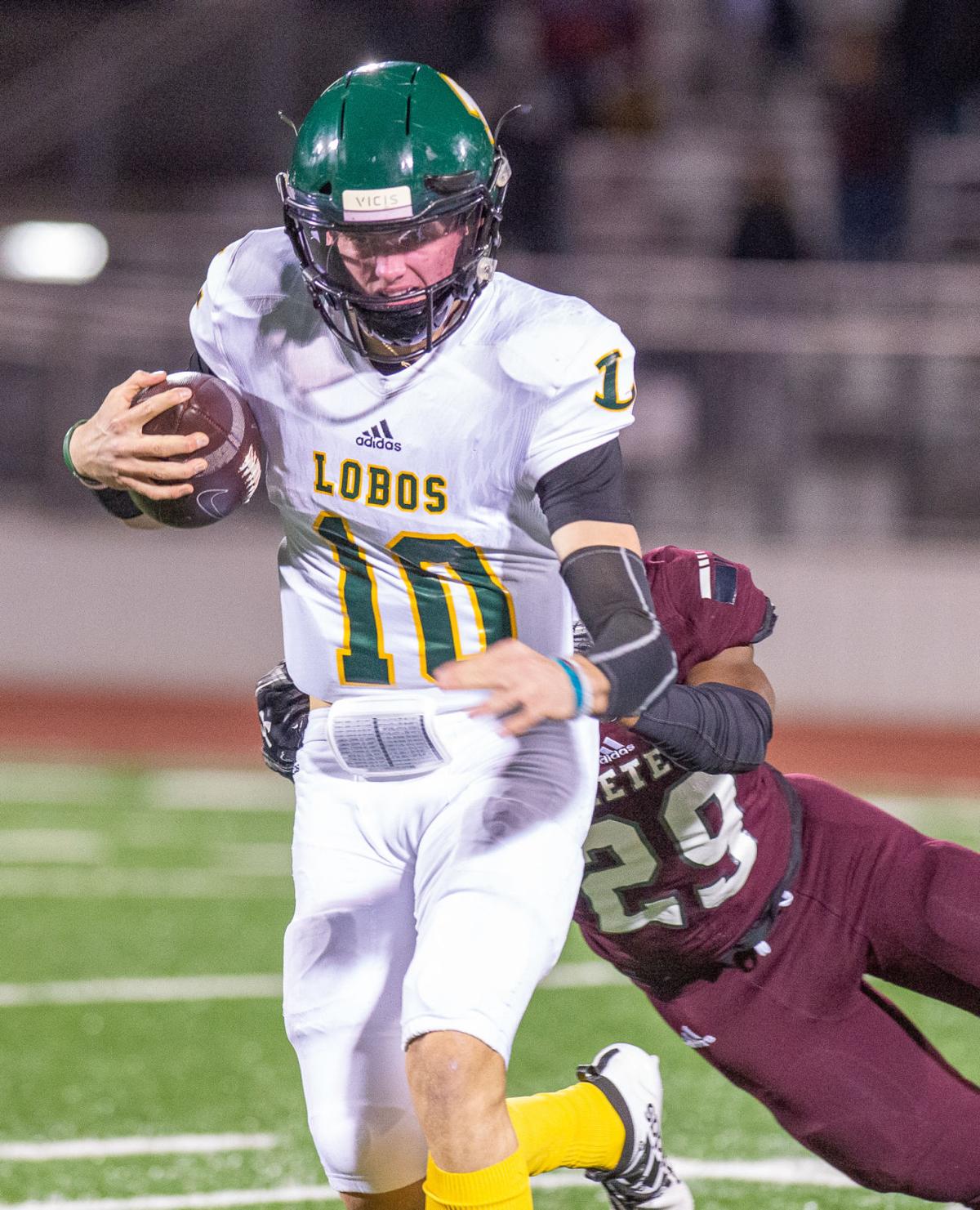 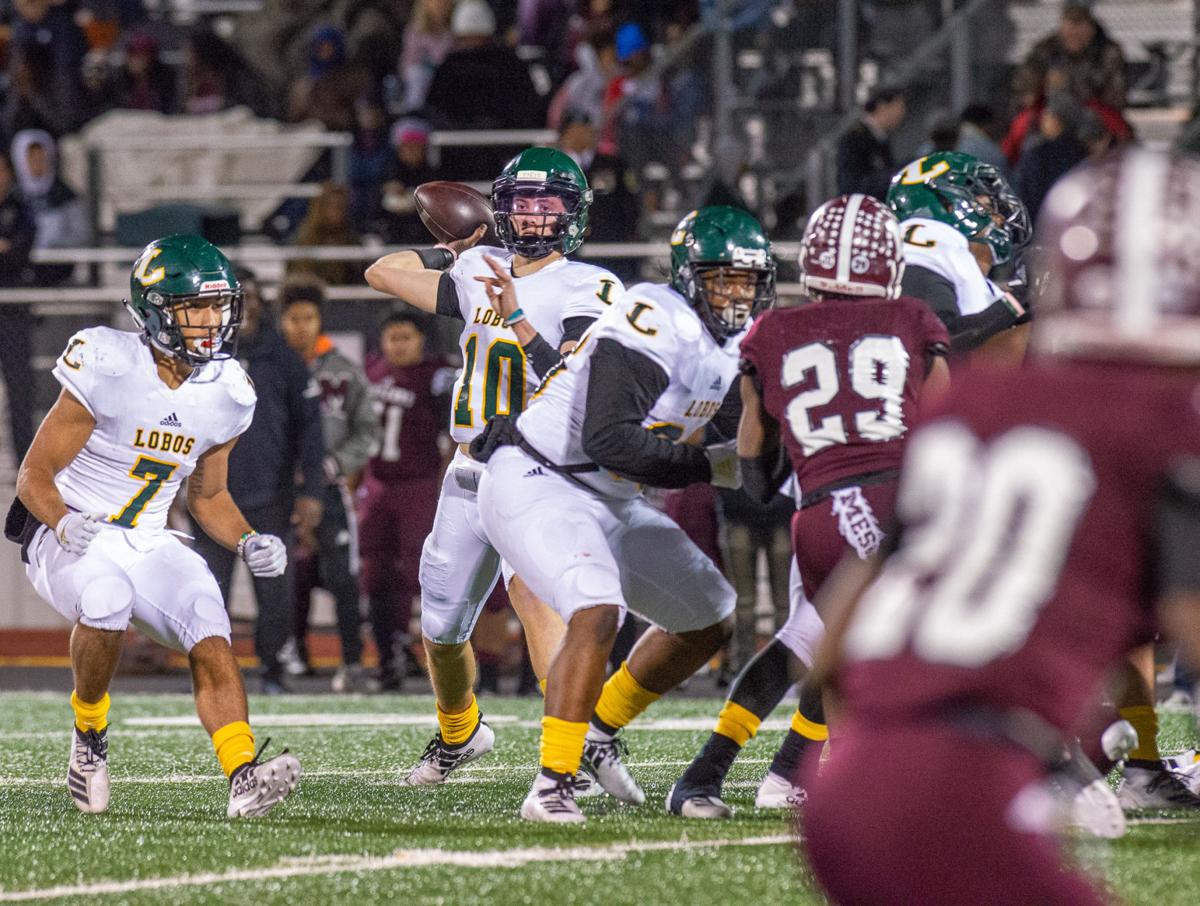 Longview's Kevin Jones charges down the field for a touchdown during Friday's November 8, 2019 game against Mesquite. (Les Hassell/News-Journal Photo)

Longview’s Kevin Jones breaks through the line of scrimmage for his second touchdown of the night Friday against Mesquite.

MESQUITE — Longview has completed the first part of its title defense.

Behind a big night on the ground and a strong showing from the defense, Longview completed back-to-back undefeated regular seasons with a 49-14 win over Mesquite on Friday night at Hanby Stadium.

With the win, the 2019 Lobos wrap up the regular season with a 10-0 mark — the 11th perfect regular season in school history — and claim the District 11-6A crown with a 6-0 run through the league. It’s the 40th district title for Longview.

“Those things mean something around here,” Longview head coach John King said. “It’s been a difficult season and we got everyone’s best shot coming off last season and all the expectations of our football team.

“For our kids to go out and do it with a new ball club, new players, it grew from Week 1 to Week 11 now. We’ve been in some tough ballgames and we dominated some too.”

Part two of the season will be against Temple, who the Lobos will host in a Class 6A, Division II, Region II bi-district playoff at 7:30 p.m. Friday at Lobo Stadium.

Longview’s defense led the charge throughout, finishing the regular season with 85 points allowed and, with two against Mesquite, 29 shutout quarters.

The Lobos held the Skeeters, who take the third seed out of 11-6A, to 216 yards of offense, forced three turnovers and had a defensive touchdown in the second-straight game.

Kaden Meredith turned in a three-touchdown night on 19 carries for 162 yards. Kevin Jones added 48 yards on four carries with two touchdowns, in a 322-yard rushing night for the Lobos. Haynes King added the sixth rushing score on a one-yard blast to finished with 62 yards.

Malik Cannon led the charge defensively with a bone-crunching hit in the second quarter that was scooped by Cedric Smith and returned 78 yards to the house to put Longview up 28-7 at halftime. Drew Beltran and Tyshawn Taylor

Tyree Hale picked off a pass and recovered a fumble for the Lobo defense, which held Mesquite (7-3, 3-3) to 99 rushing yards on 33 carries, the eight sub-100-yard rushing game of the season for opponents.

Mesquite finished with a pair of passing touchdowns from Minnesota-bound Dylan McGill, who hit JaTravion Rudd for 40 yards and JaDarion Smith on a 35-yard score.

Defense was strong both ways to start with Mesquite punting on its first possession followed by back-to-back turnovers on downs between the two teams.

King connected with Kyas Moore, who finished with three catches for 73 yards, on a 39-yard strike, setting up Jones’ first of two touchdowns from 23 yards. The bull fullback trucked a tackle at the goal line on fourth down to put Longview up 7-0 late in the first quarter.

Hale the picked off a pass, setting up a 58-yard march from the Lobos, highlighted by a 13-yard catch from Kaden Kearbey and 23-yard snag from Moore. Meredith recorded his first score on a six-yard run.

Mesquite got on the board with Rudd’s touchdown haul and the Lobos, after a long kickoff return from Shannon Jackson, answered with Jones’ second for a 21-7 lead.

The Lobo defense forced a three-and-out before the Skeeters’ Reggie Reese picked off a pass on a tipped ball. Meredith was there for the tackle to save a pick six.

Five plays later, Cannon made a bead on McGill and delivered a big blow. Smith was there for the 78-yard scoop-and-score for a 28-7 Lobo lead at halftime.

Meredith had 55 yards on three carries with his second touchdown to open the second half after another long return from Jackson.

McGill and Mesquite answered with a long drive. Meredith and King, around Mesquite’s third lost fumble, capped the 49-14 win and 10-0 regular season.