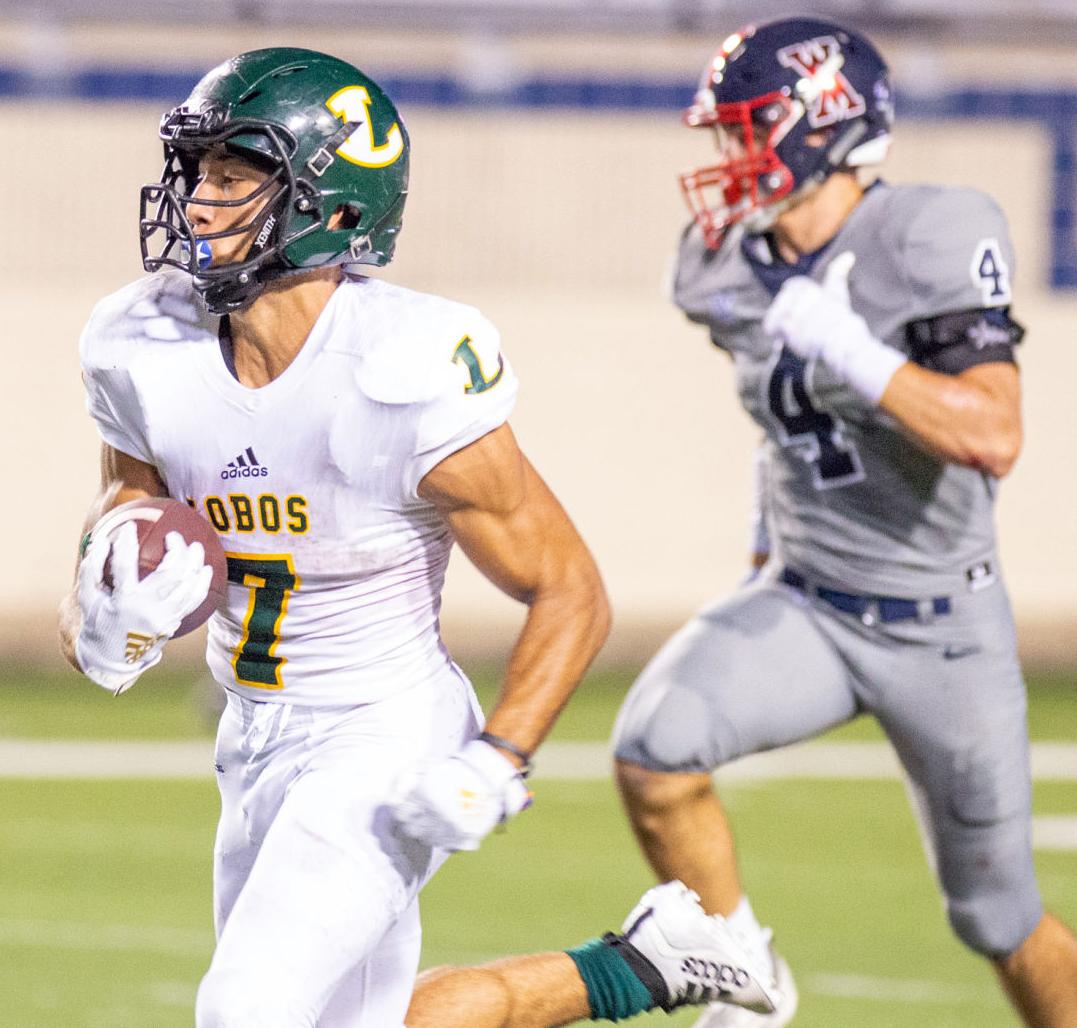 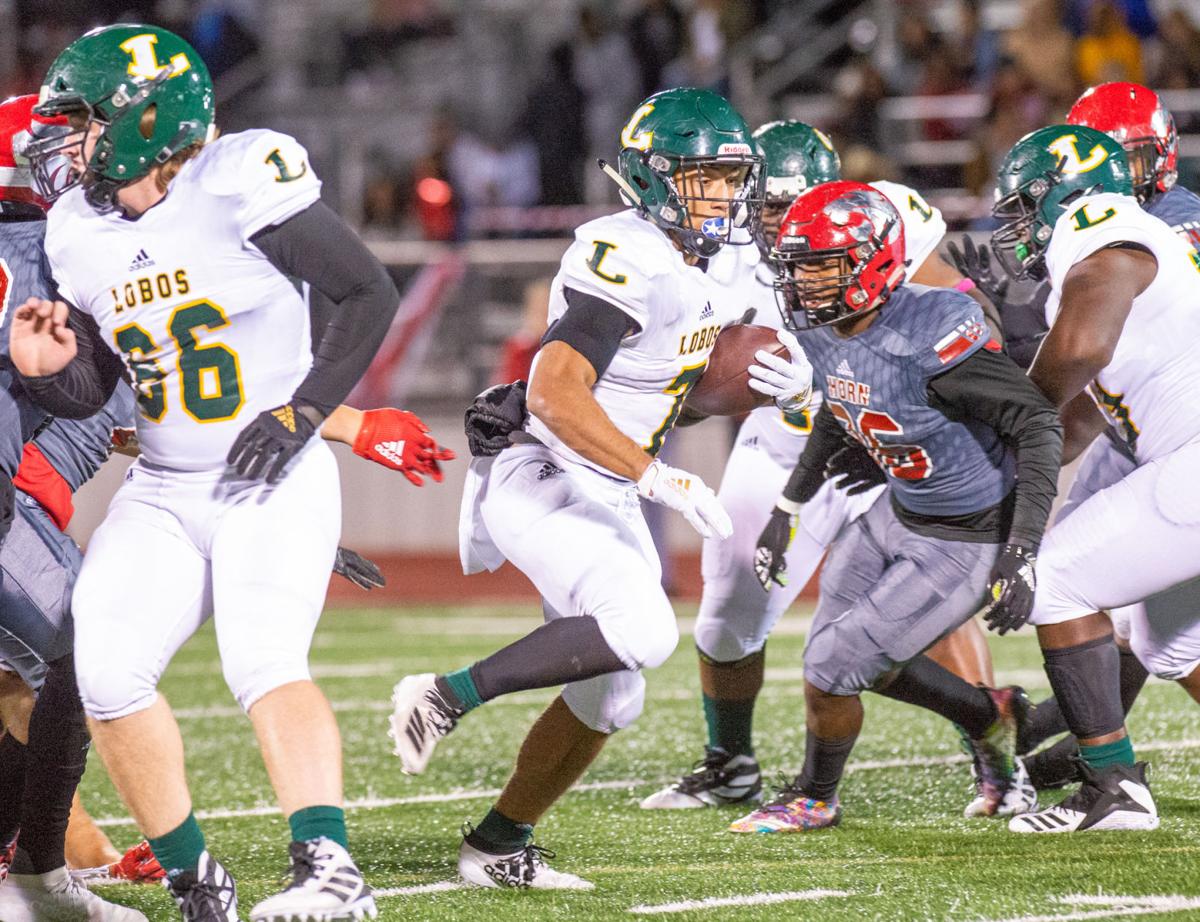 Longview’s Parker Cox (66) blocks as running back Kaden Meredith hits a hole against Mesquite Horn this past Friday in Mesquite. 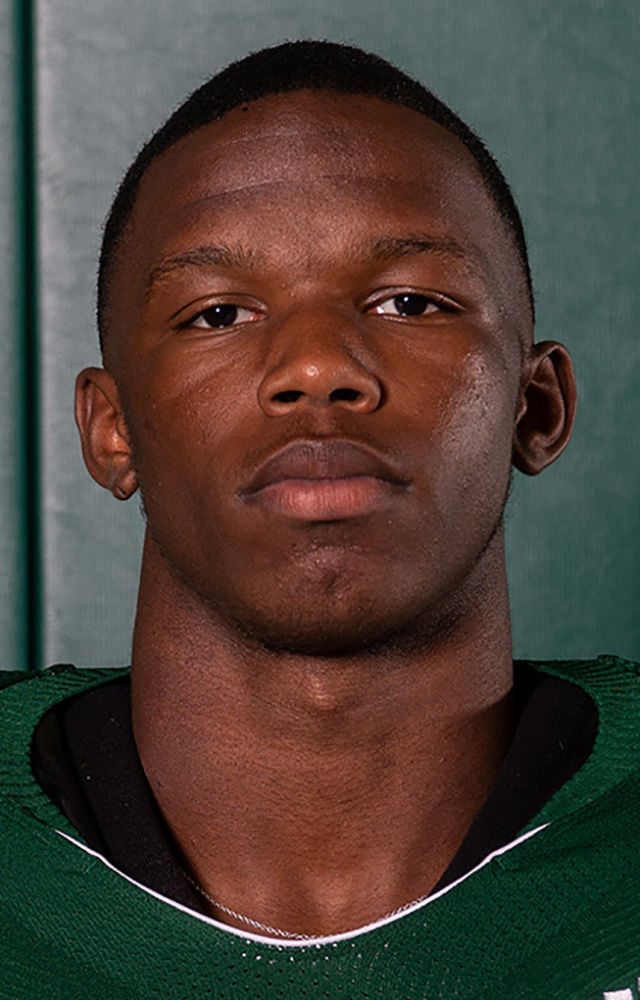 Longview’s Parker Cox (66) blocks as running back Kaden Meredith hits a hole against Mesquite Horn this past Friday in Mesquite.

With a new classification, a new district and a new team overall coming in, this spring was set to be a crucial one in terms of questions to be answered and work to be done for the Longview Lobo football team.

The beginning of a “new era” for Lobo football, like every other team in Texas high school football, has been put on hold due to the coronavirus, which wiped out spring practice and has teams eyeing a potential return to practice in August.

“We’ve got a brand new football team moving forward that didn’t have spring practice and will be out close to 14 weeks without a regimented workout plan,” King said this past week. “It’s going to be totally different. There are some questions that we still have that are going to be tough to answer in the short period of time that we’ll have come August.

“Everyone is dealing with this so there’s no whining or complaining. What we always try to do in spring is find the identity of our football team so you can sit back in the summer, evaluate and say ‘I feel good about this spot or area and move forward.’ Our approach will be a little different this year, obviously. It’s uncharted territory but we’ll have some ways to figure it out.”

June 8, the proposed start date that the University Interscholastic League is eyeing for a possible return to limited summer workouts, will mark 14 weeks since King and company has seen the team in person. King said the biggest thing about the June 8 restart date, which the UIL is currently working on plans and guidelines for, would be a acclimatization period to get kids back in shape.

“That’s going to be a big part of it once we get back,” King said. “We’re going to see how everyone has spent their time over the past couple of months as we work to get everyone back into shape.

“There are a lot of questions and will be a lot of questions moving forward in terms of how many workout days, skill-specific days, indoor workouts or outdoor. We’re going to have to be flexible and build a plan where safety, which is the top priority, and using our time efficiently will be key.”

That span includes the annual Green-White Game, which would’ve wrapped up the Lobo spring this past Monday.

Longview, like all upper-level classifications that missed spring practice, added a second scrimmage this August and will take on rival Lufkin a tuneup. The Lobos will then wrap up the preseason with a scrimmage against Texas High. Both times and locations for the scrimmages are to be announced.

“We’re going to have to think outside of the box about what is best for us with the current team that we have,” King said. “We lost 41 seniors and have a lot of questions in the line of scrimmage on both sides of the ball, questions at quarterback, questions in the secondary that we’ve got to get answered.”

Prior to the shutdown, King began one-on-one interviews with the team heading into spring break.

“We’ve got to find out best 22 to put out there, no matter where they end up,” King said. “I met with about half the team before we left for break and no one balked at the idea of changing positions. Everyone understands the importance.”

Running back Kaden Meredith and safety/outside linebacker Kybrien Jackson-Jamerson lead the charge in returners on both sides of the ball. Both Meredith and Jackson-Jamerson committed to UT-San Antonio earlier this spring, marking the first two commits under first-year head coach and Gilmer native Jeff Traylor.

Longview has experience returning in spots but several big questions remain moving forward. Here’s a quick look at what would’ve been the biggest storylines from the Lobo spring:

■ QB: Replacing a decorated and three-year starter in Haynes King was never going to be an easy task but the quarterback room for the Lobos is full in terms of players and competition. Senior Otarvio Buchanan is back with the most varsity experience and four others — Isiah Harris and Rodney Moore, who both saw time on the junior varsity, as well as incoming sophomores Landyn Grant and Jordan Allen.

“Coach (Chris) Vallery had already started with those guys before spring break to get those guys going on what we’re going to do and what the plan was going to be,” King said. “All five are in the mix, all five have been tuned into meetings and all five have had a chance.”

■ OL: The magic number remains eight for the Lobos — five starters and three quality backups, King said. Tavion Sterling, a senior, is the lone starter back on the offensive line. Connor Cox and Jatavian Bush are back from injuries while King said Logan Washburn ‘came along as the 2019 season went along’ and Jonathan Tutt was the backup center and adds depth in several places. This is an area where several JV players on both sides of the ball could compete for a spot.

■ FB: Joining Meredith in the backfield is Markevion Haynes, who quickly had eight carries for 95 yards and a touchdown before his junior season was cut short to injury.

■ WR: Whoever lands at quarterback will have options at wide receiver. Jalen Hale, an incoming sophomore, finished with seven catches for 164 yards and three touchdowns as a freshman. This spring, Hale has landed offers from Arkansas, Kansas and Auburn. Cedric Hopkins returns as another sure-handed receiver.

■ DL: Same as above in the trenches with just one starter — Joe Jones — back in this area. A lot of competition and moving parts were to be expected here. Jesse Fairchild, a incoming junior, was having a great offseason, King said. There are a lot of options here for the Lobos.

■ Options: Along with Jackson-Jamerson, Tyree Hale is back after coming on strong down the stretch in 2019 along with linebackers Laqualon Hale and Devan Isaac, who physical specimens to go on the front seven. The secondary has questions, no doubt, but options, including Dylan Davis, who was rising to the second cornerback spot in 2019 before an injury.