You are the owner of this article.
Edit Article Add New Article
You have permission to edit this article.
Edit
Welcome, Guest
Home
Sports
Schools
Stats
The Zone
Lobo Insider
Columns
Photo Galleries
Pro
Player of the Week
1 of 6 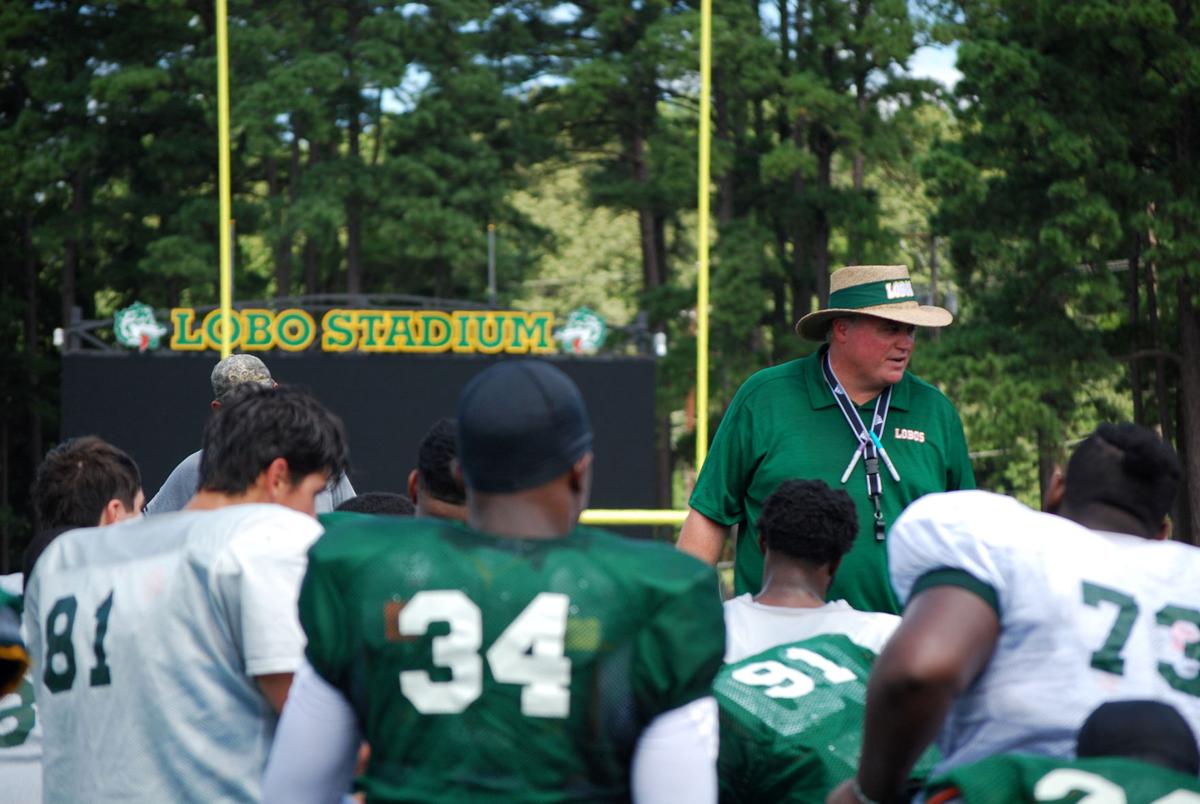 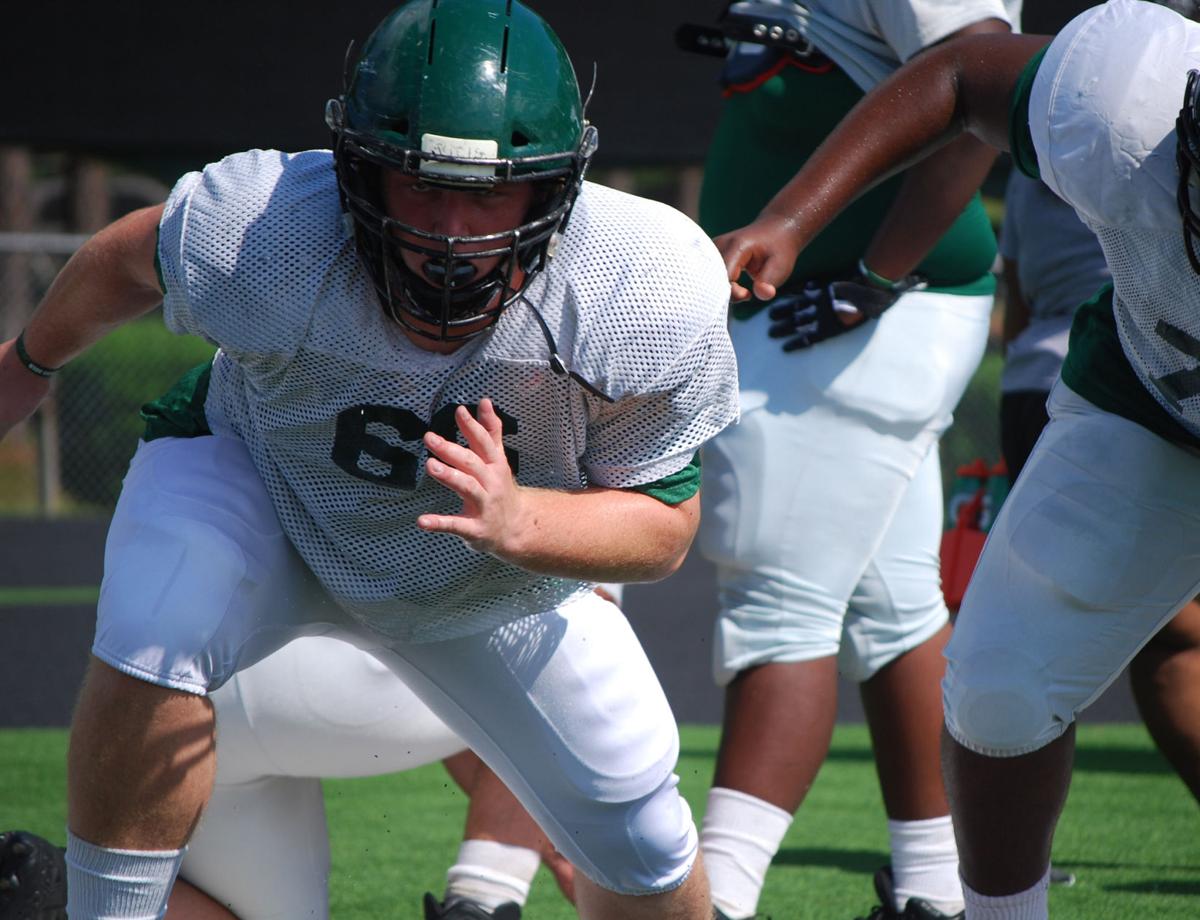 Longview offensive lineman Parker Cox warms up prior to an intrasquad scrimmage on Saturday at Lobo Stadium. 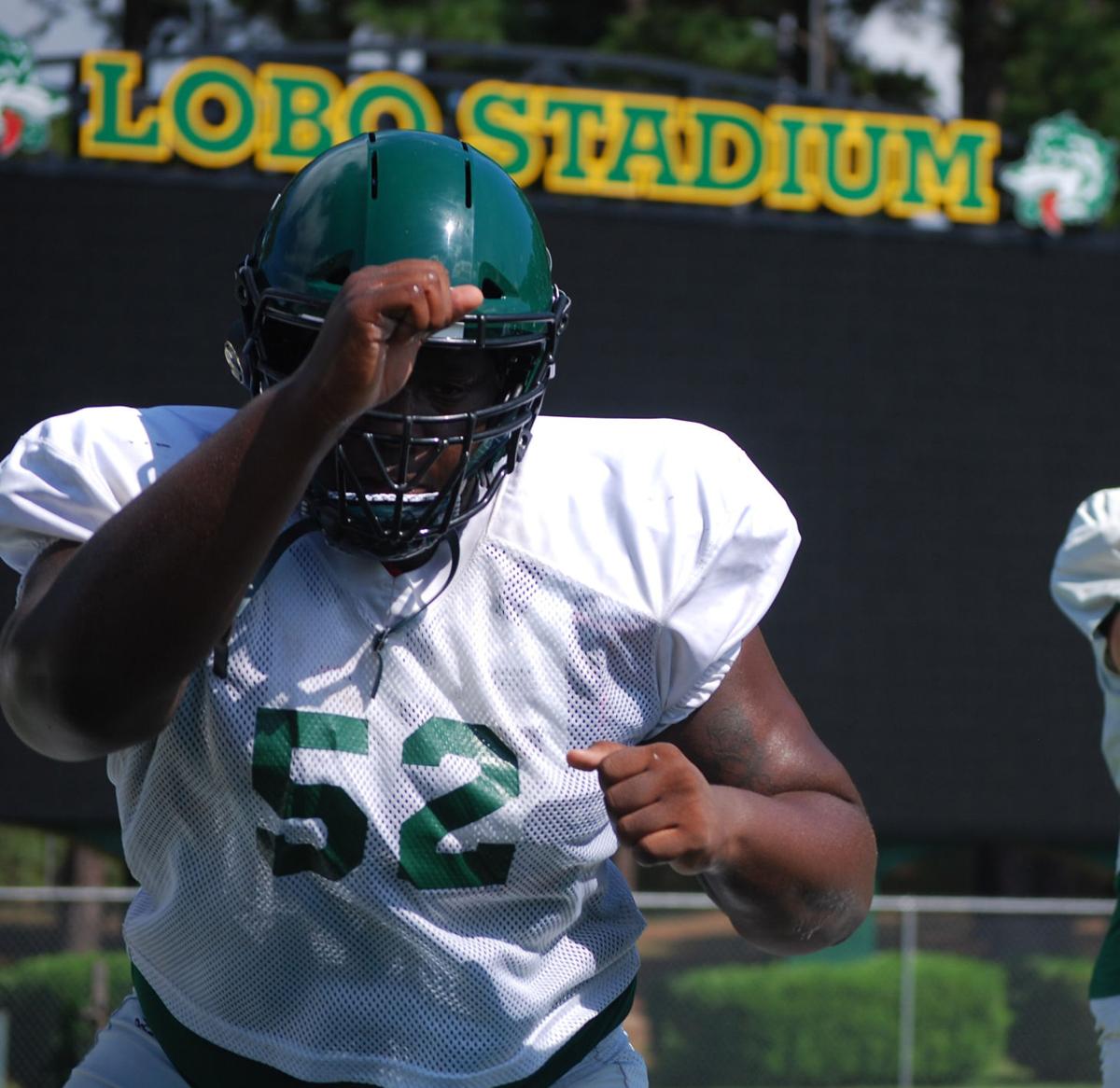 Longview offensive lineman Tim Polk warms up prior to an intrasquad scrimmage on Saturday at Lobo Stadium. 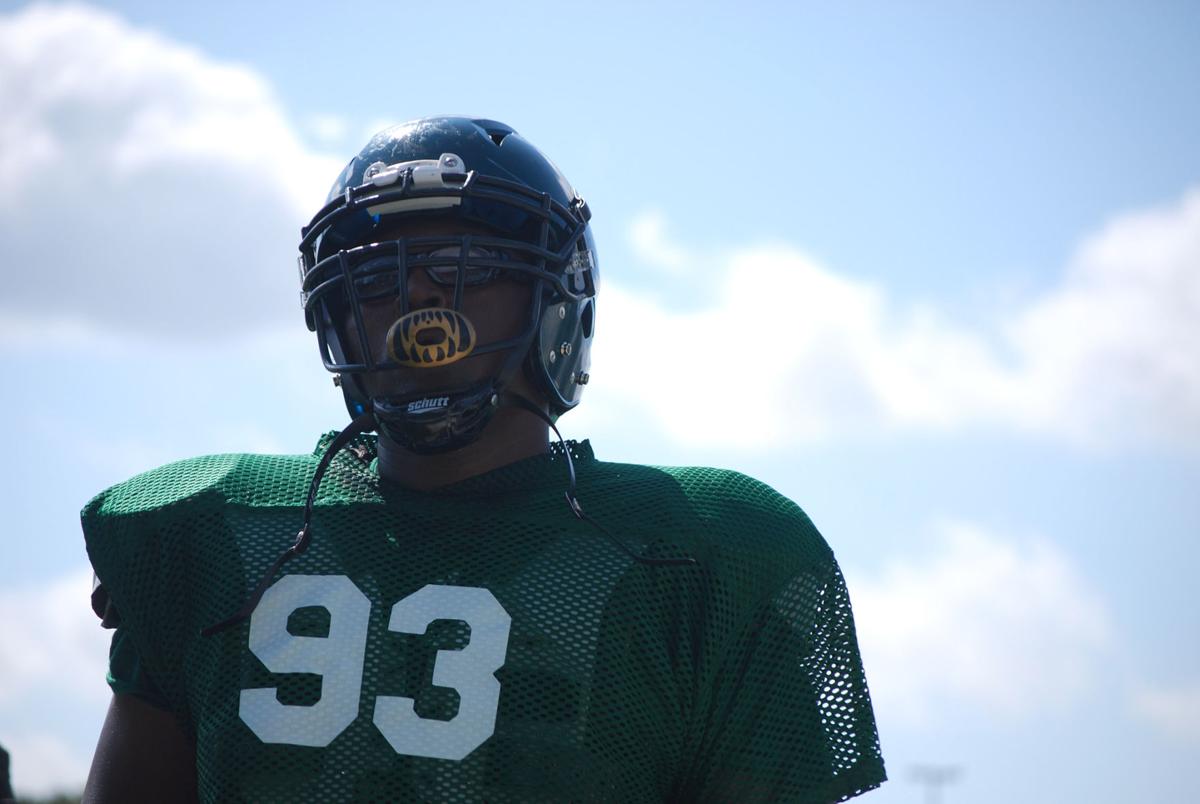 Longview defensive lineman Joe Jones warms up prior to an intrasquad scrimmage on Saturday at Lobo Stadium. 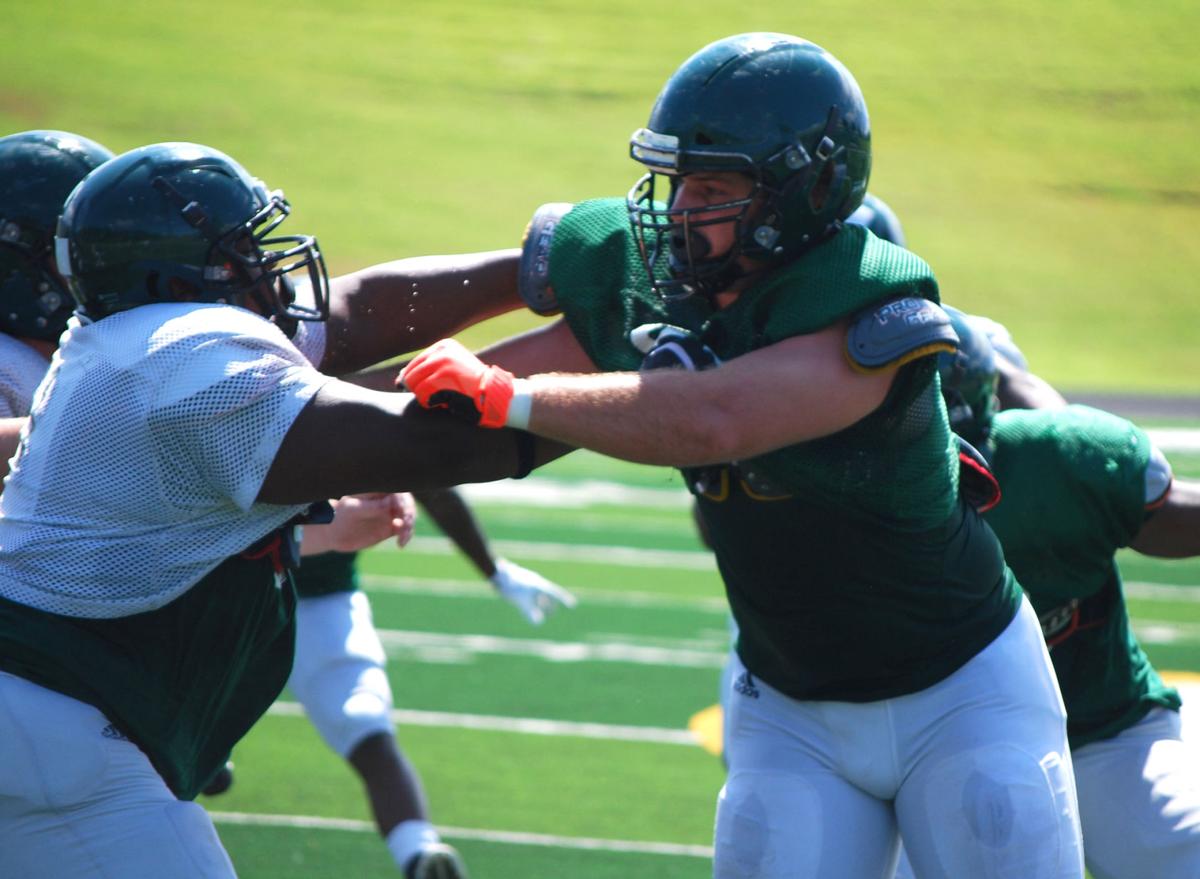 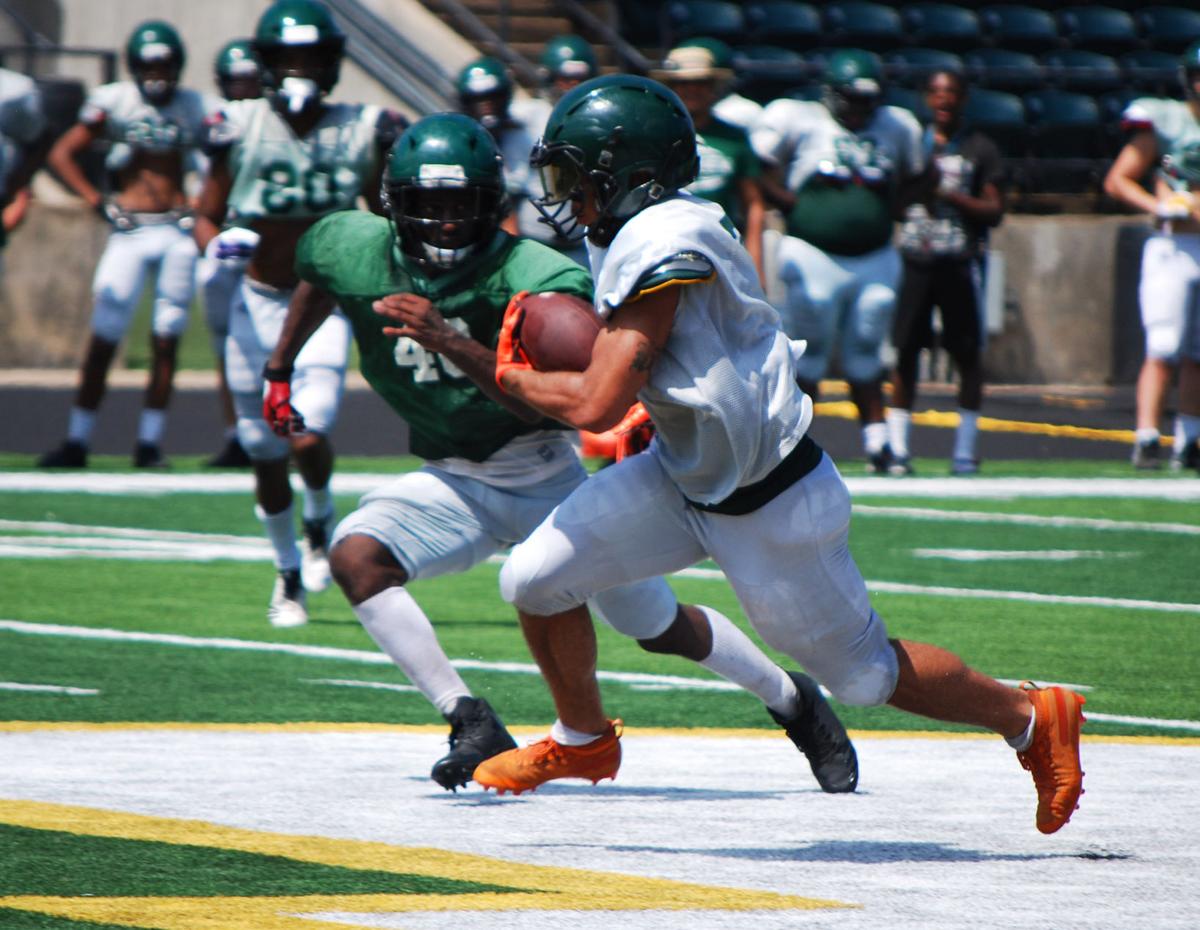 Longview offensive lineman Parker Cox warms up prior to an intrasquad scrimmage on Saturday at Lobo Stadium.

Longview offensive lineman Tim Polk warms up prior to an intrasquad scrimmage on Saturday at Lobo Stadium.

Longview defensive lineman Joe Jones warms up prior to an intrasquad scrimmage on Saturday at Lobo Stadium.

Longview head coach John King didn’t pull punches while wrapping up the first week of preseason practice on Saturday as far as what comes ahead for the Lobos.

In particular, the speed at which everything is coming at them as the 2019 season rapidly approaches.

“We’re under two weeks away from heading to Lufkin to open this season at a place and against a team that we’re very familiar with,” King told the team following Saturday’s intrasquad scrimmage, the first day in full pads for the defending state champions. “Things aren’t going to get any easier going forward — both right here on the practice field and wherever this season takes us.”

The focus remained squarely at home this week, a plan that will continue into week two of practice what will wrap up with the Lobos’ lone scrimmage of the preseason on Friday against Texas High. After a rough start on Monday, King said he was pleased with the progression and growth throughout the week for Longview, who return just a handful of players on both sides of the ball.

“I thought the progression throughout the week was about what we expected it to be,” King said. “It’s hot but it’s August everywhere in Texas.

“The effort was good, the execution was good for the most part, our retention level has been good and the kids are flying around. We’re making progress daily but we’re not where we need to be to win a ballgame but that’s why you practice. We’re making mistakes that we have to clean up but I’ve seen a lot of guys grow up and mature. Our philosophy has always been about focusing on the whole and not the part.”

Things are settling on the offensive line, King said, but depth and finding quality backups, all while keeping a high competition level for the starting spots will continue.

“We’ve got to find depth at a lot of places and we have some guys that will give us quality depth,” King said, adding that there are 149 sophomore to senior players and 75 on the freshman team.

Saturday’s intrasquad scrimmage summed up the week of the good, bad and ugly with both sides of the ball shining at times.

Quarterback Haynes King connected with junior wide receiver CJ Hopkins twice for a touchdown and hit junior tight end Austin Pencheon on another, all three coming in tight space from the Lobo secondary of Dakirin Buchanan, Shannon Jackson, Patrick Webb and Dylan Davis, who all had their moments as well.

On the ground, senior do-it-all JD Williams, who saw time at running back, slot receiver, backup quarterback and kick returner, made a couple of highlight-reel catches. Junior running back Kaden Meredith gained tough yards at times and then broke free for a long touchdown run.

Special-teams wise, the kicking trio of Spencer Powell, Antonio Onofre and Raul Torrez all had bright spots in an area of concern for King coming in.

“I feel a lot better about that area than I did this morning from the snaps to the holds to the kicks,” King said. “It’s starting to come together and we have a few of weapons there.”

Week two of practice will be crucial for the Lobos, who are embarking into new territory in 2019 as defending state champion with an added pressure and expectations sky-high.

“I know these kids don’t want to disappoint anyone, especially themselves, and they’re working with that mentality,” King said. “I think the nucleus of this football team is preparing in the right way. With some new faces, we’ve still got some that maybe weren’t primetime players a year ago that don’t understand the intensity level you have to practice with every day at every drill.

“There are moments but we’ve got to do it every day and finish it. That’s where leadership from the players and guidance from the coaches comes in. We’ve got to get it done together and be ready to battle together. Live I’ve said many times, it’s lead, follow or get out of the way and now is the time to decide what to do.”

Longview will continue practice every day after school. Friday’s scrimmage is set for a 7 p.m. start time for the varsity at Lobo Stadium.