You are the owner of this article.
Edit Article Add New Article
You have permission to edit this article.
Edit
Welcome, Guest
Home
Sports
Schools
Stats
The Zone
Columns
Photo Galleries
Pro
Player of the Week
1 of 11 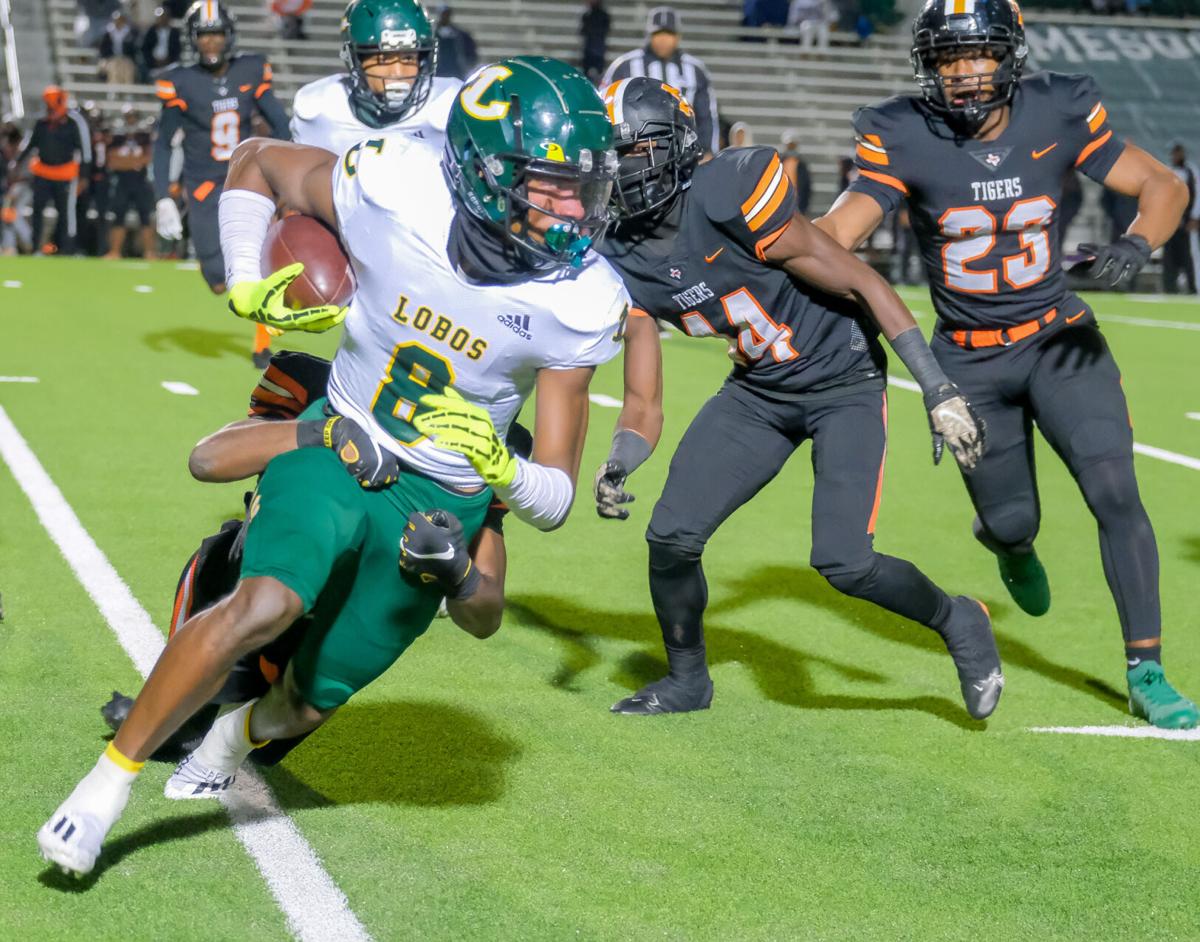 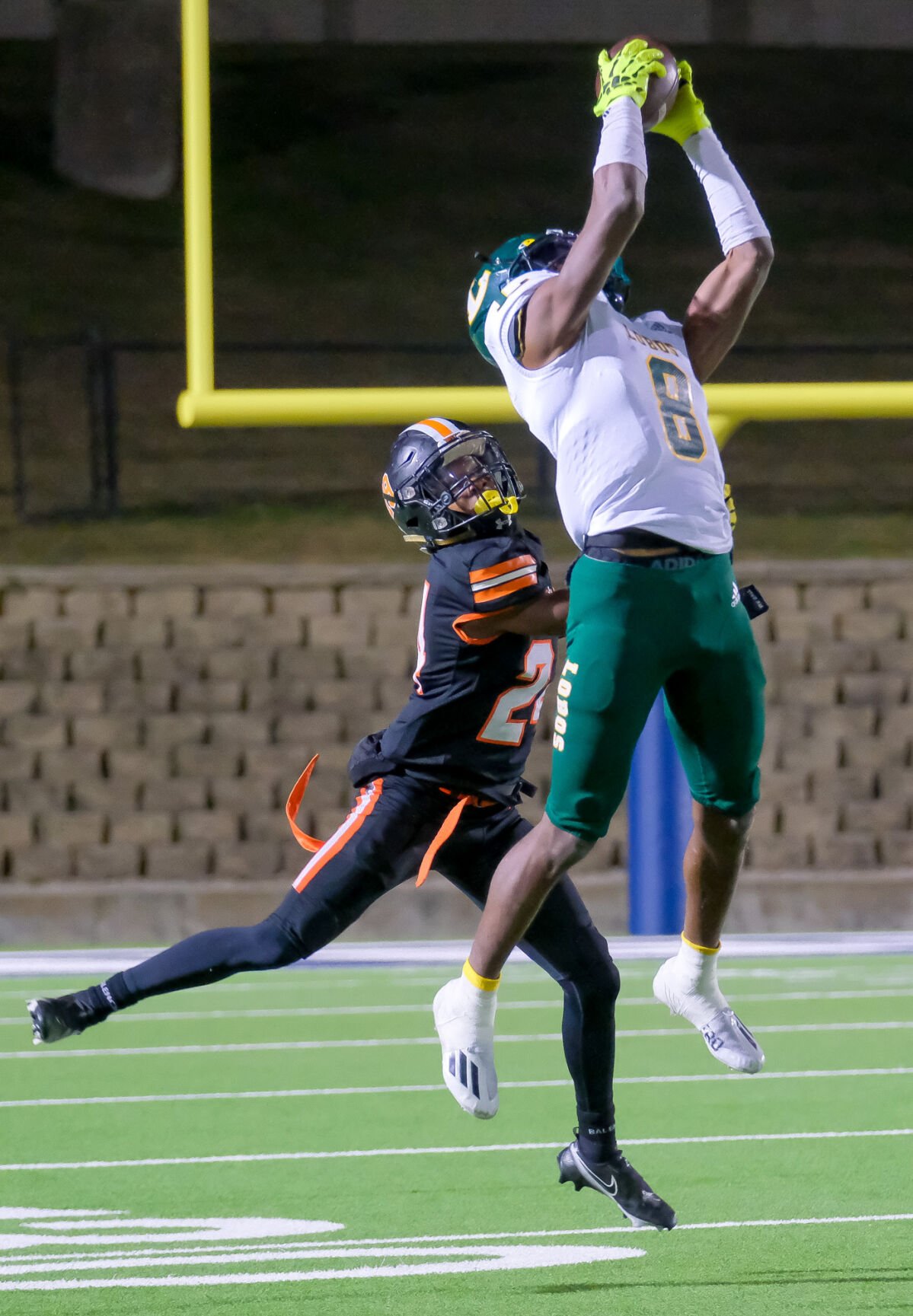 Longview’s Jalen Hale pulls down a pass reception during Friday’s game against Lancaster in Mesquite. 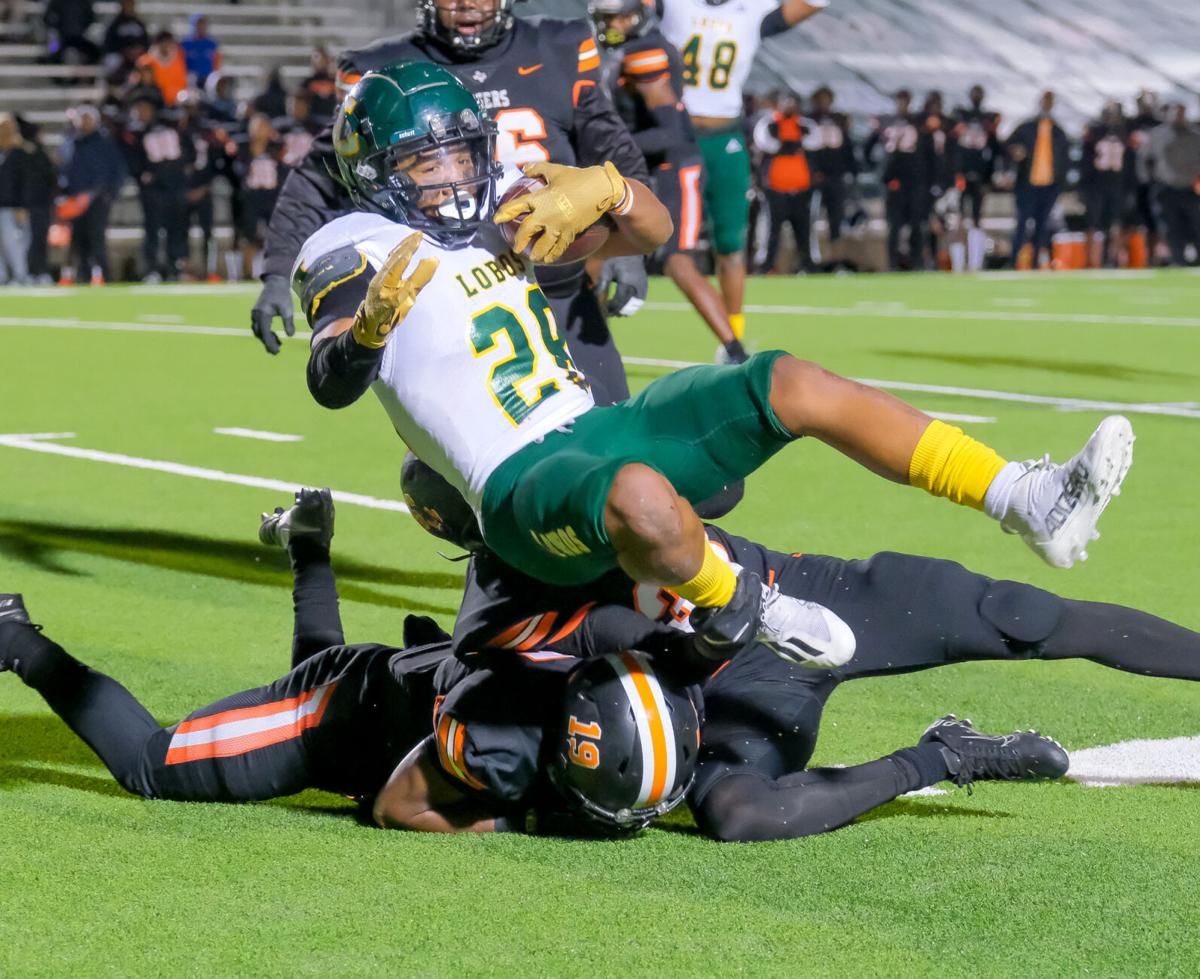 Longview’s Taylor Tatum fights for yardage during Friday’s game against Lancaster in Mesquite. 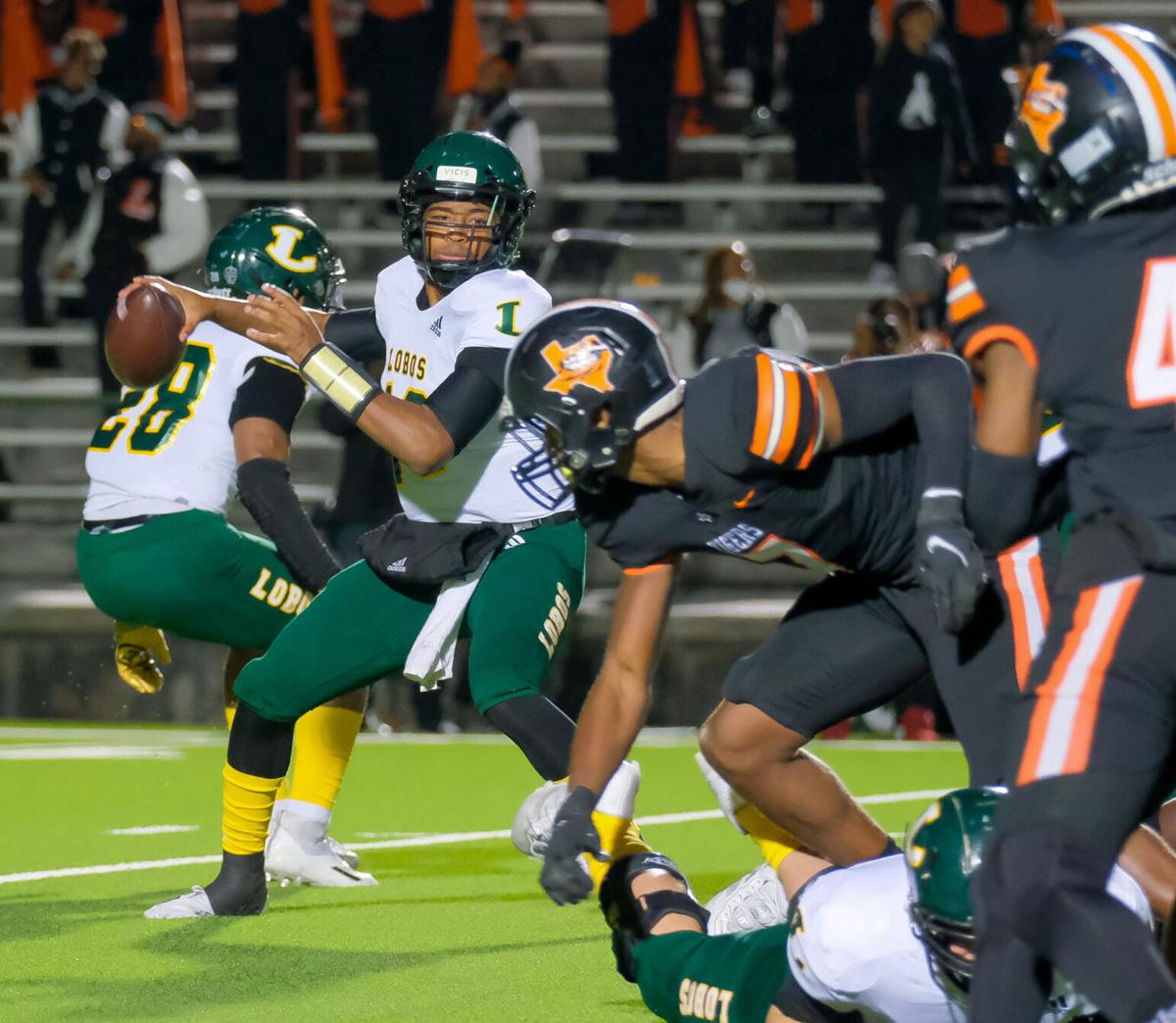 Longview’s Joshua Thomas looks for a receiver during Friday’s game against Lancaster in Mesquite. 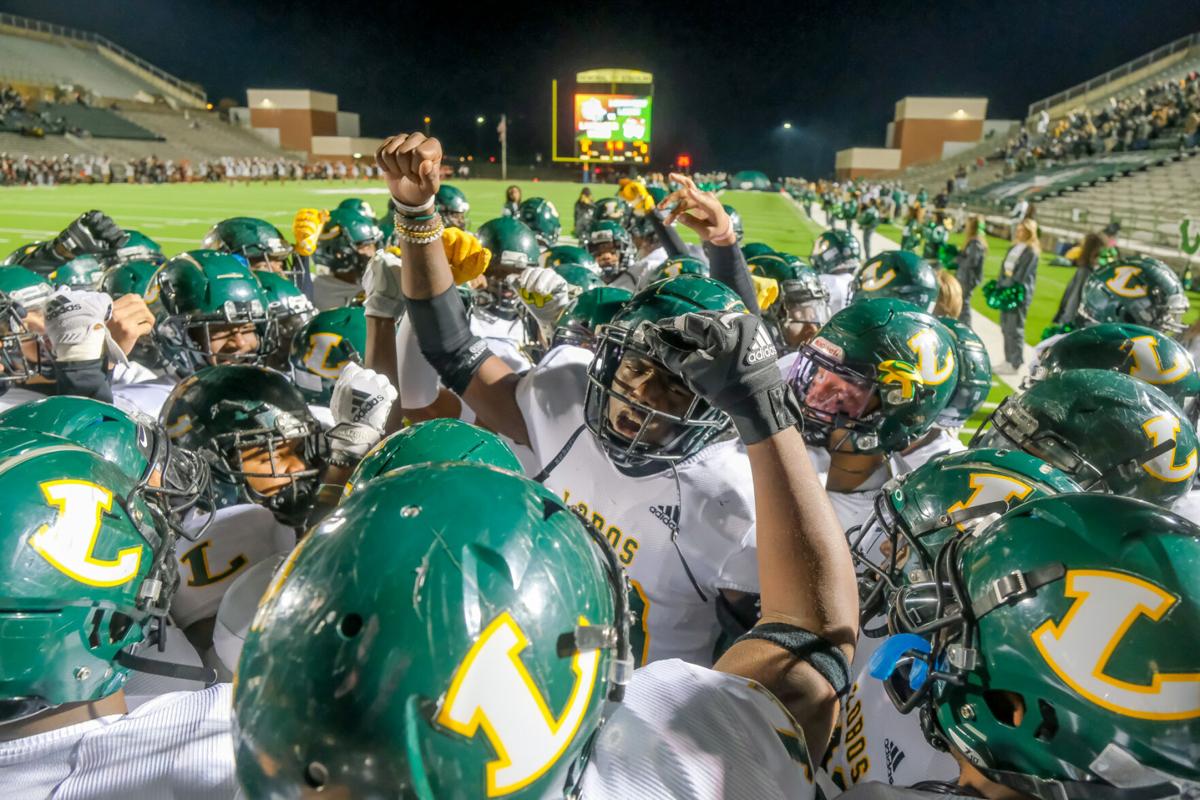 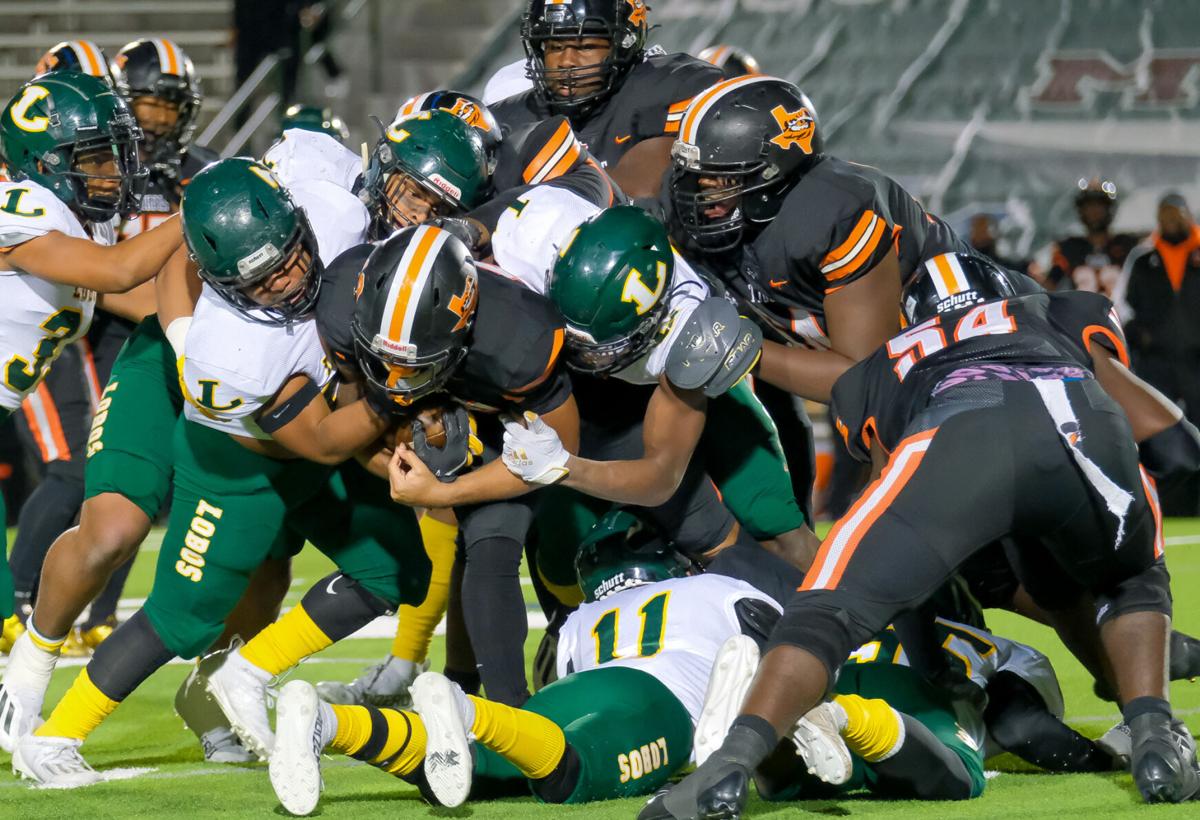 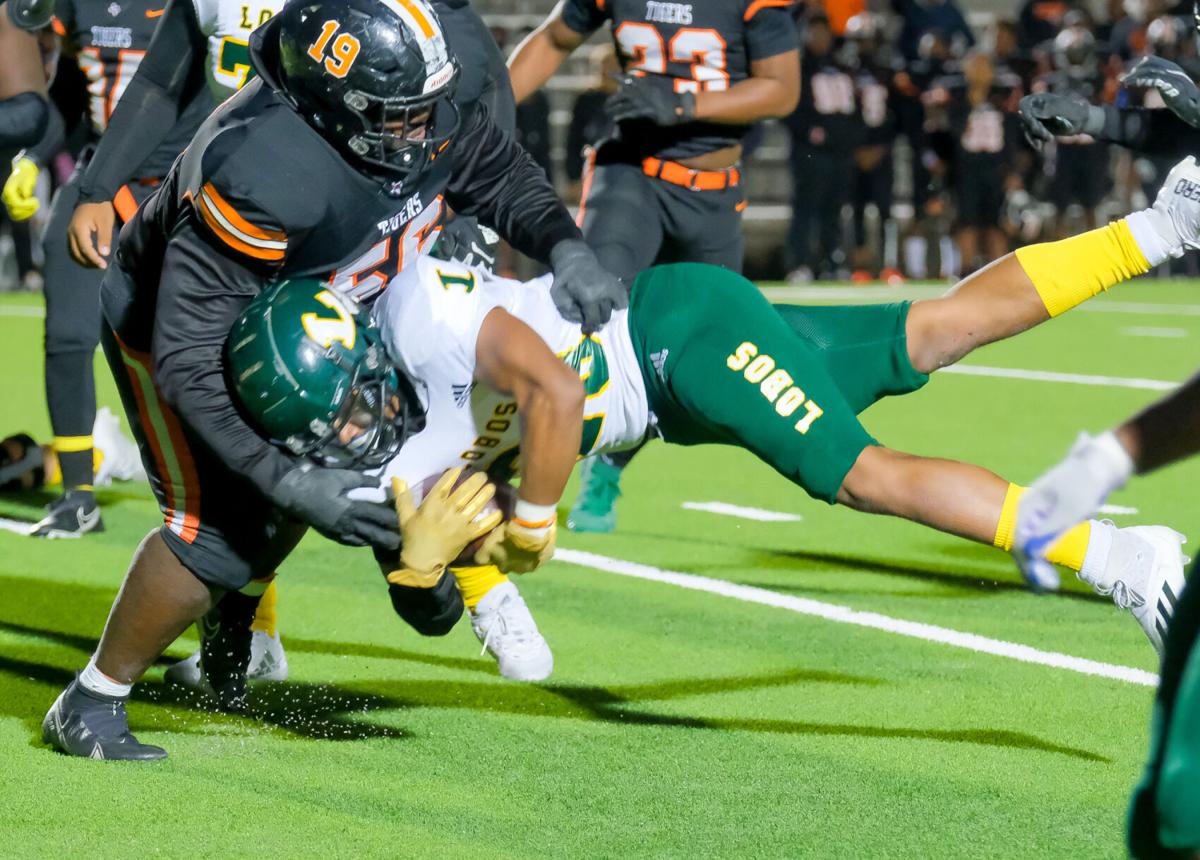 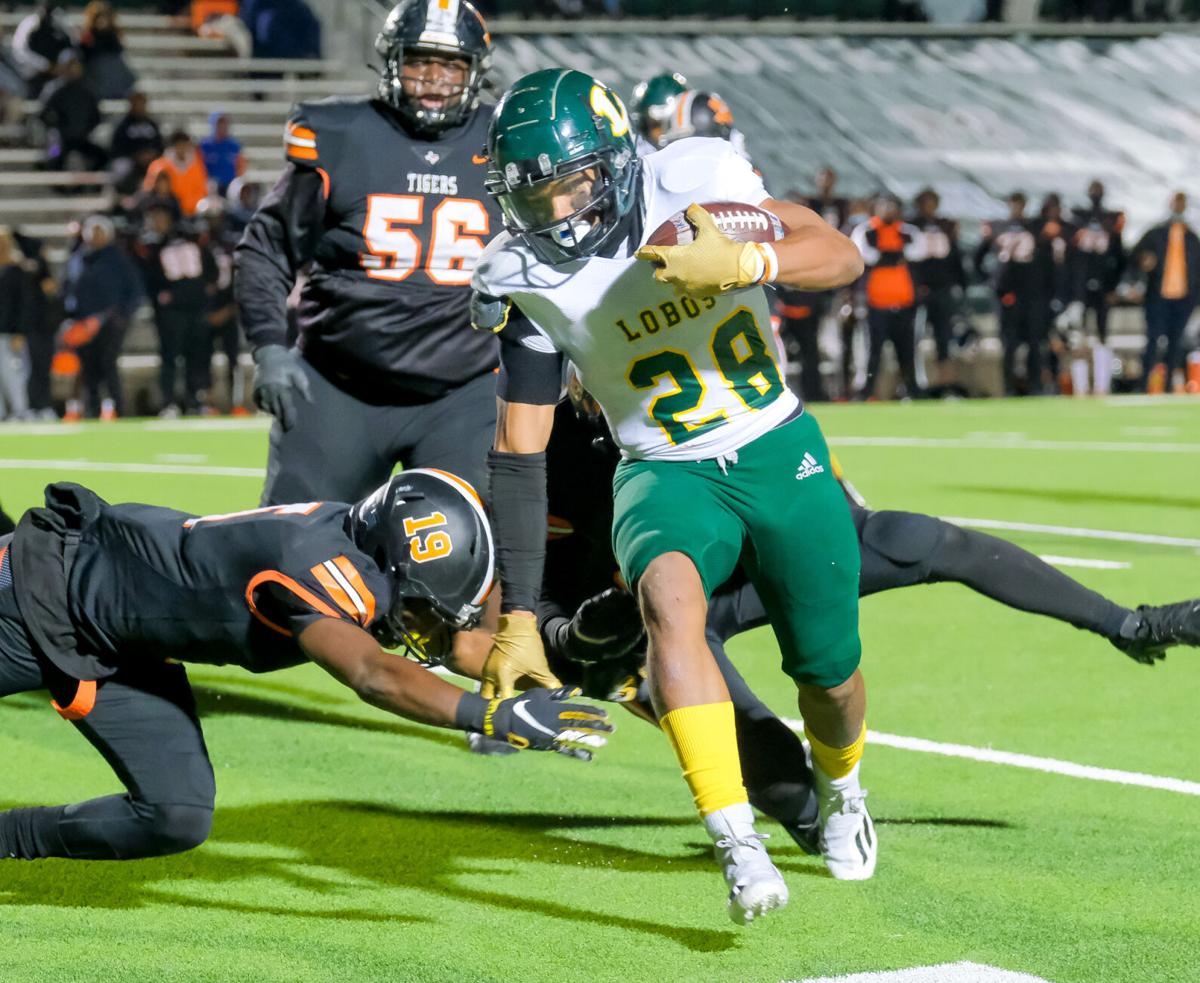 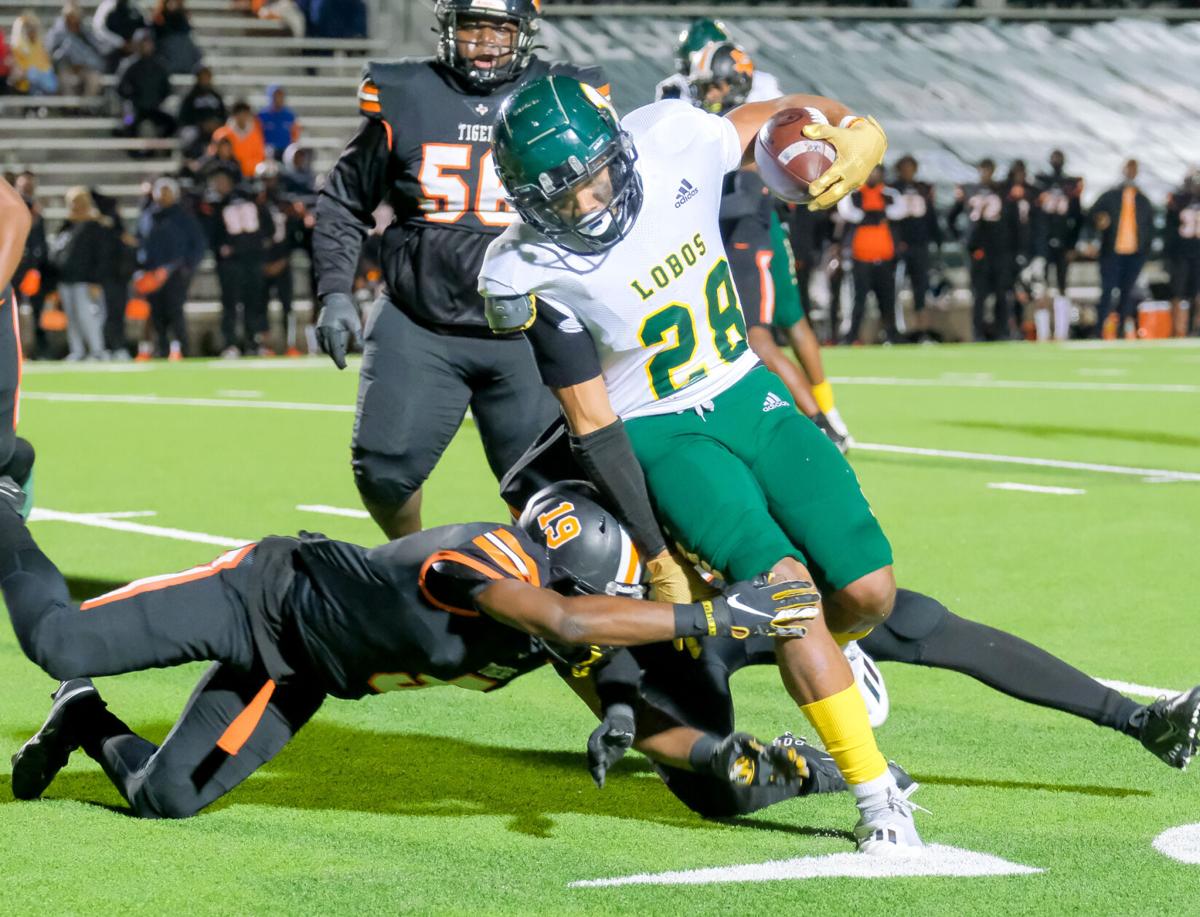 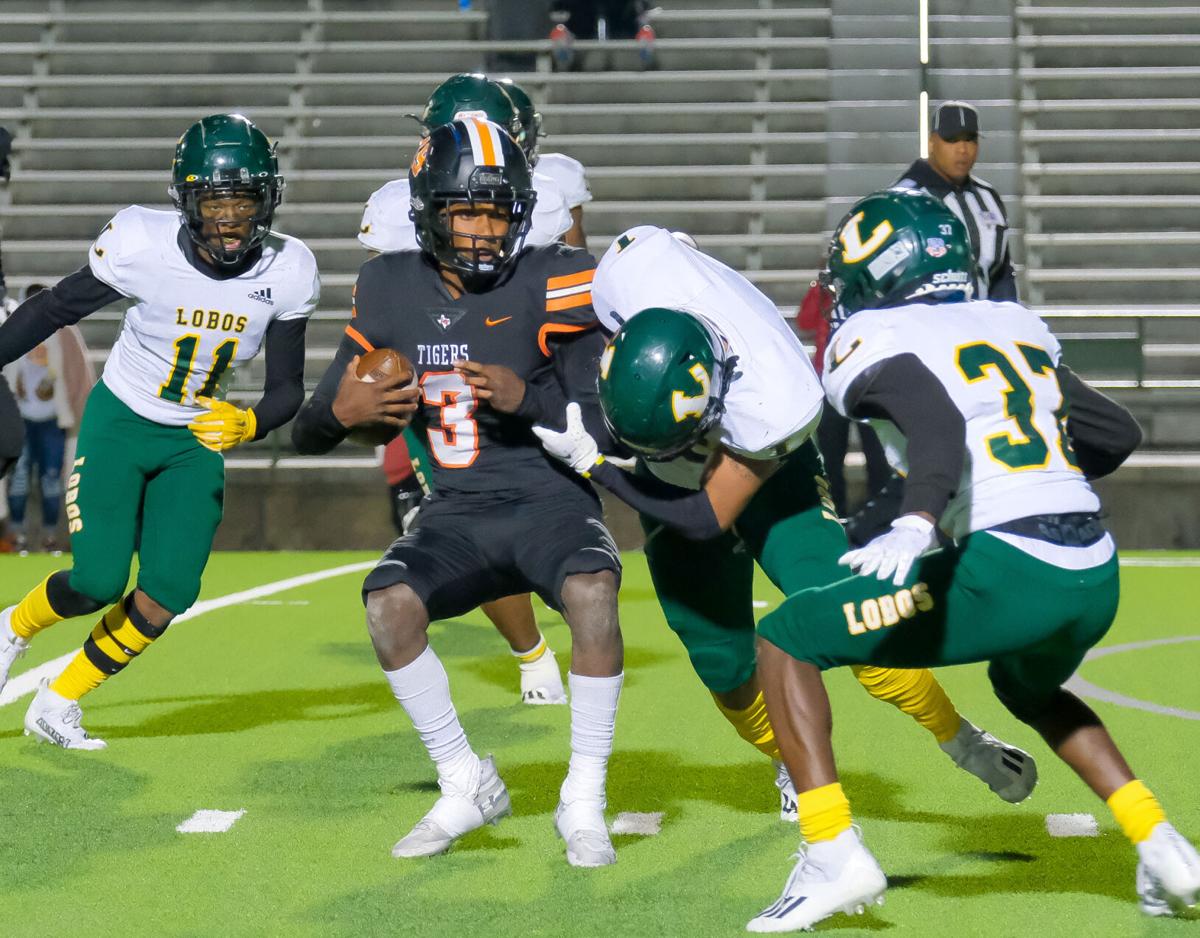 Longview defenders stop the quarterback for a loss during Friday's November 19, 2021 game against Lancaster in Mesquite. (Les Hassell/News-Journal Photo) 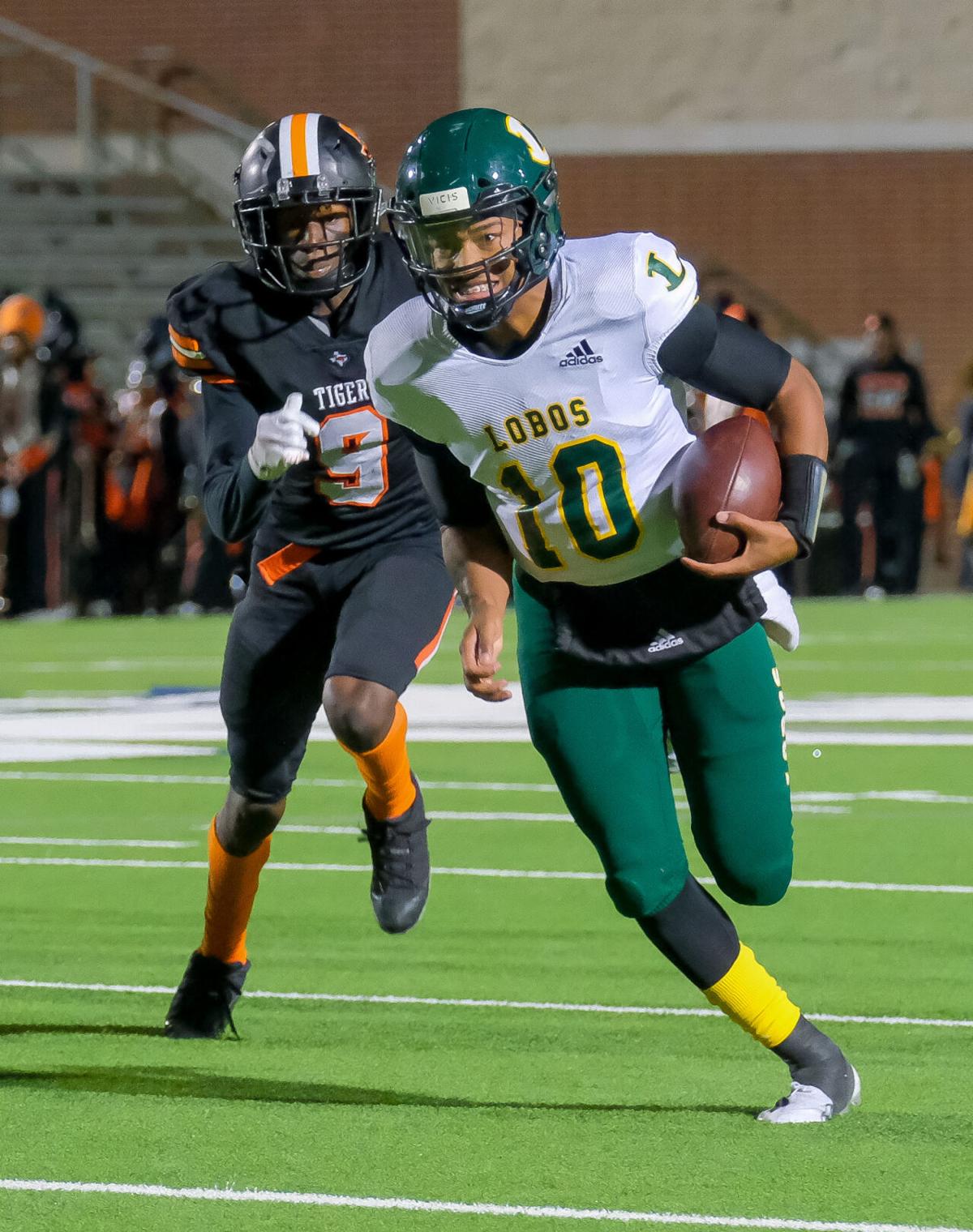 Longview’s Jalen Hale pulls down a pass reception during Friday’s game against Lancaster in Mesquite.

Longview’s Taylor Tatum fights for yardage during Friday’s game against Lancaster in Mesquite.

Longview’s Joshua Thomas looks for a receiver during Friday’s game against Lancaster in Mesquite.

Longview defenders stop the quarterback for a loss during Friday's November 19, 2021 game against Lancaster in Mesquite. (Les Hassell/News-Journal Photo)

The Lobos closed out their 34-14 win with 24 unanswered second half points to improve their season record to 9-3, and advance to next week’s regional semifinal against Saturday’s Denton Ryan/Magnolia West winner.

Longview also moves to 3-0 all-time against Lancaster, and 11-4 in games at Mesquite Memorial Stadium, while Lancaster finishes its 2021 season with a 10-2 record.

“We got some big plays offensively and turnovers on defense,” Longview athletic director and head football coach John King said of his team’s playoff win on Friday. “It’s a great overall team win.”

The game began with Lancaster’s eight-minute and 27-second opening drive. The Tigers drove all the way down to the Longview four-yard line, but Isaiah Broadway lost a yard on his rush attempt, and Nathan Gonzalez was unable to execute a 22-yard field goal attempt on the final play of the drive.

It wouldn’t take long for the first score of the night. Longview took over at the 3:33 mark of the opening frame, and quickly marched down the field on a two-play, 80-yard scoring drive that was wrapped up by Joshua Thomas’ 74-yard touchdown run. That gave the Lobos a 7-0 lead with 2:55 left in the first quarter.

Thomas finished the game with 141 rushing yards and a trio of touchdowns on 13 carries, and also completed nine of his 16 passes for 122 yards and a touchdown.

The Lobos extended their early lead to 10-0 on Michael Fields’ successful 38-yard field goal attempt at the 5:52 mark of the second quarter.

Lancaster wouldn’t stay silent for long though. The Tigers answered with Glenn Rice’s one-yard touchdown run with 2:40 left in the first half to cut the Longview advantage to 10-7. Rice finished with 60 yards and a touchdown on 18 carries, as well as 160 yards and a score on a 15-of-27 passing performance.

The Tigers put more pressure on Longview in the opening minute of the second half, and took their one and only lead of the game. They successfully recovered the opening kickoff at the Lobo nine-yard line. Then, on the next play, Rice found Phaizon Wilson on a nine-yard touchdown pass to make it a 14-10 game at the 11:50 mark of the third quarter.

Wilson earned 52 yards and a touchdown on his four Friday night receptions.

Longview regrouped with Thomas’ 30-yard touchdown strike to Jalen Hale to retake the lead at 17-14 with 1:18 left in the period.

Hale finished the night with five receptions for 93 yards and a score.

The Lobos then returned to their run game in the opening minutes of the fourth quarter, which allowed them to take their first 10-point lead since the first half.

And a Longview game wouldn’t be complete without a couple forced turnovers by its defense. It started with Willie Nelson’s eighth interception of the season, which occurred at the 7:11 mark of the frame. Then, Ta’Darion Boone’s first pick of the year was returned 42 yards at 4:52.

Following Fields’ 41-yard field goal that made it a 27-14 game at the 3:44 mark, Longview’s defense recovered a Lancaster fumble at the 3:11 mark. The Lobos turned that into another score, which occurred on Thomas’ two-yard touchdown run with 2:23 left.

“It wasn’t particularly pretty, but we kept playing,” said King. “I was really pleased with Michael Fields and the two field goals he made. Those were huge to give us the 13-point lead. And then to get that last turnover, and punch it in and score, that was big.”