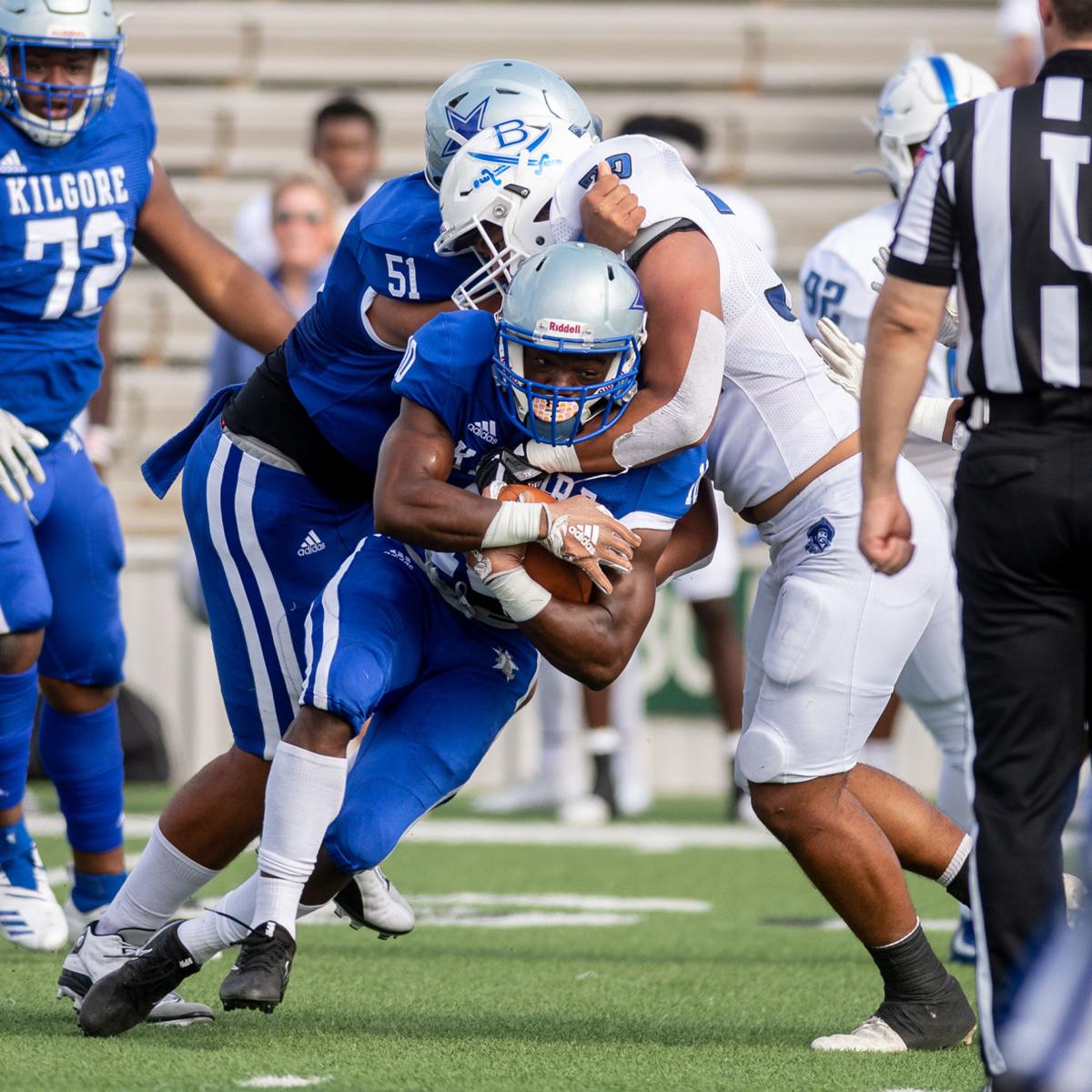 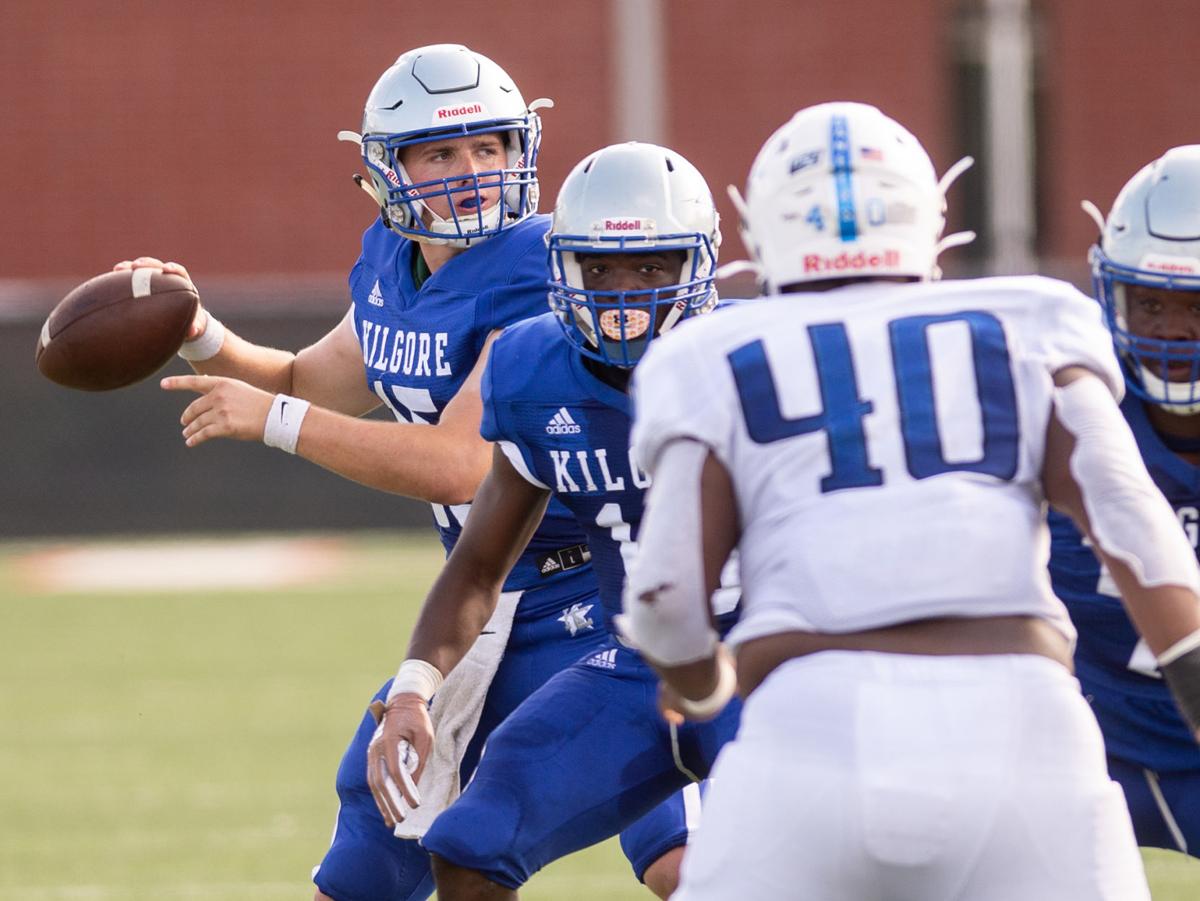 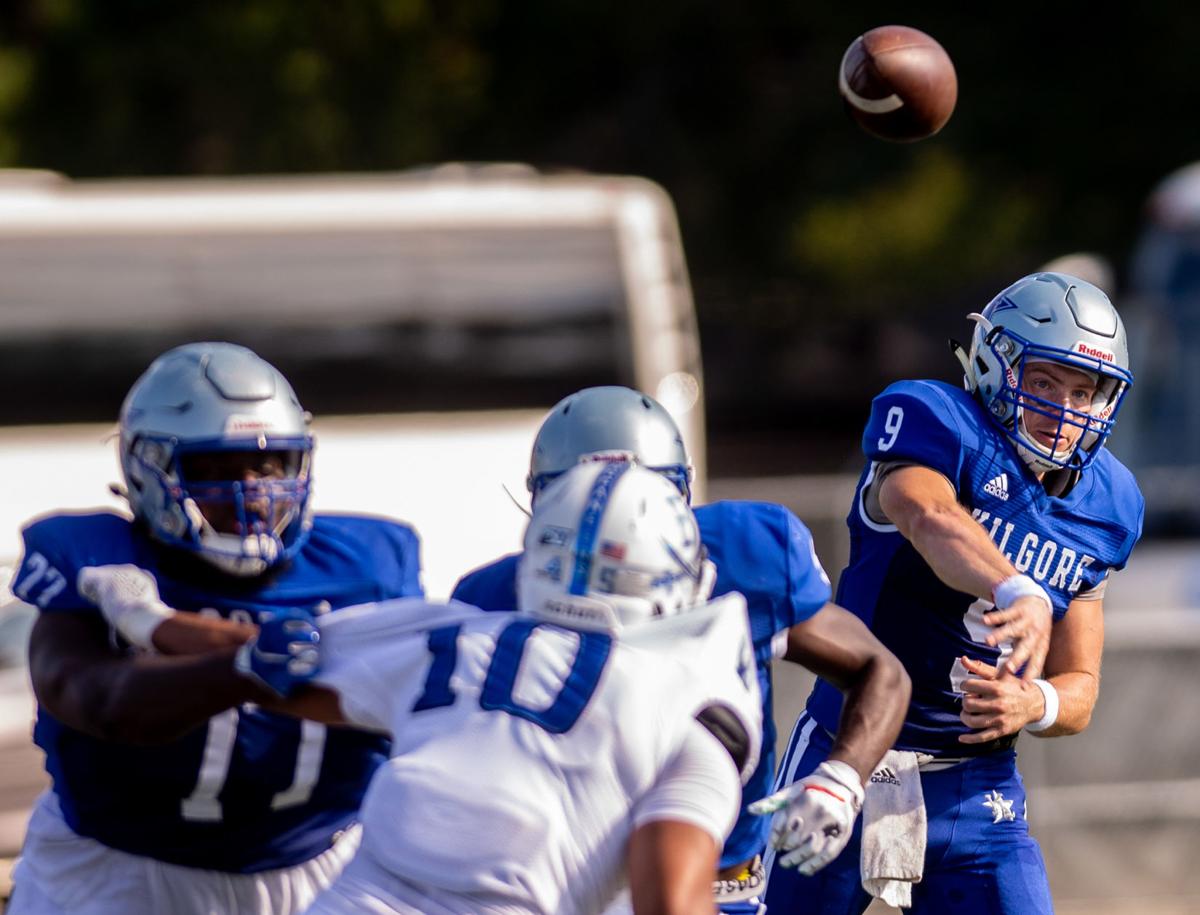 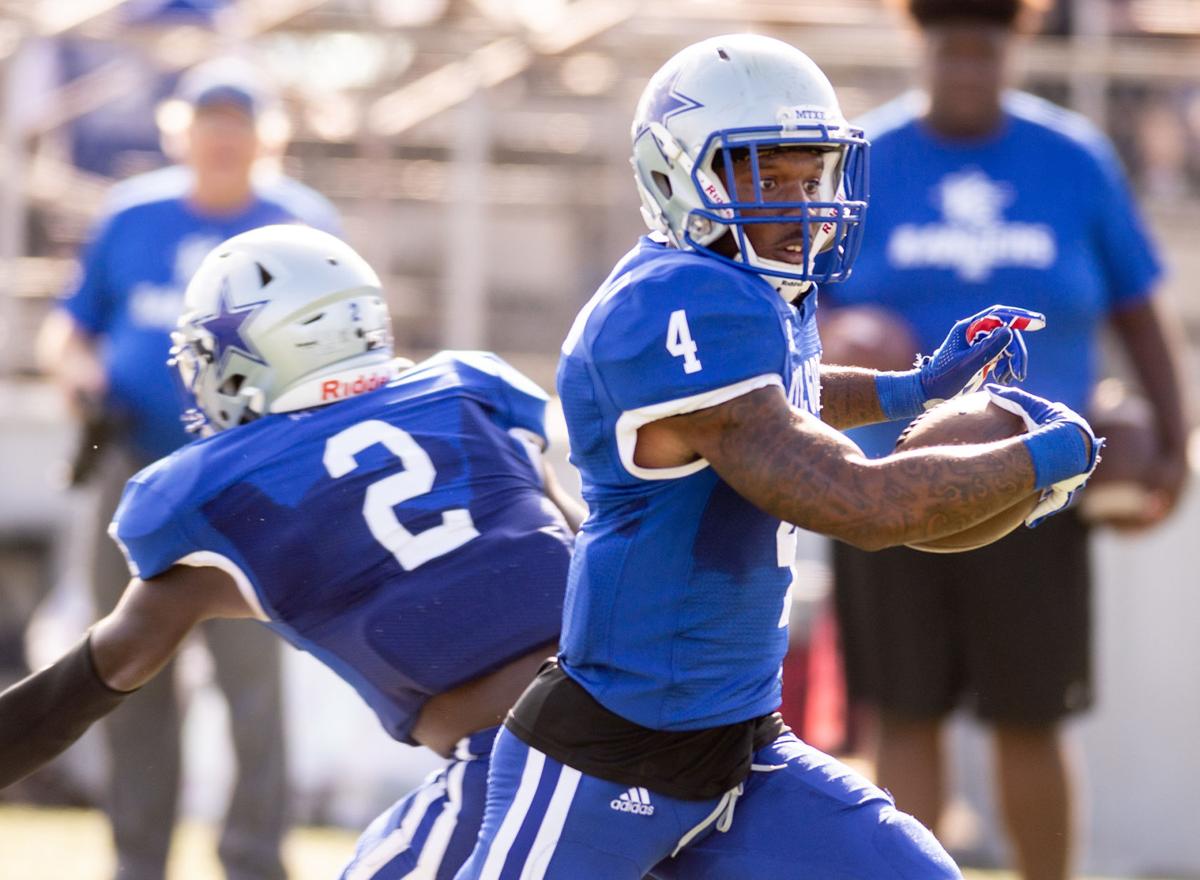 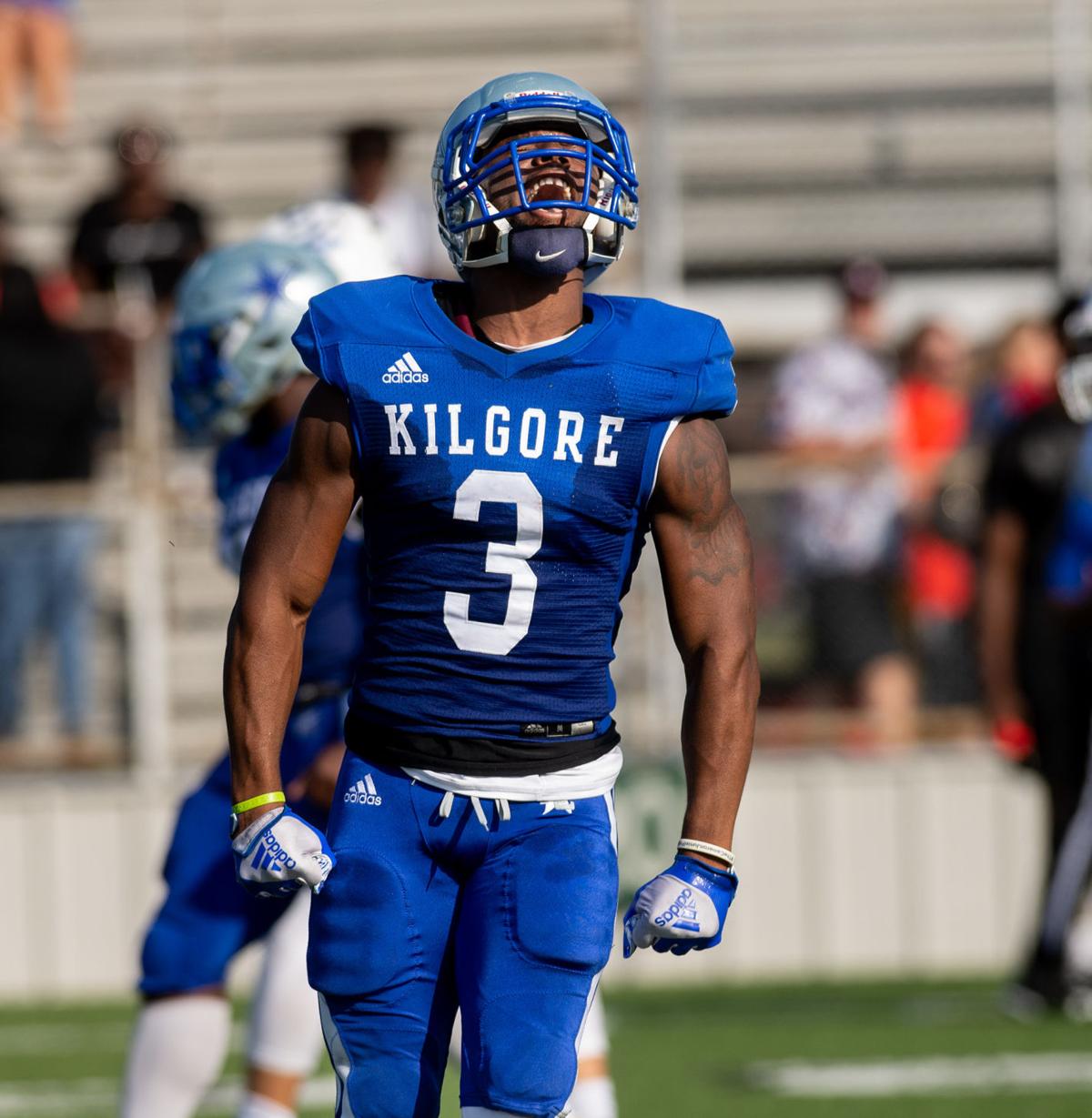 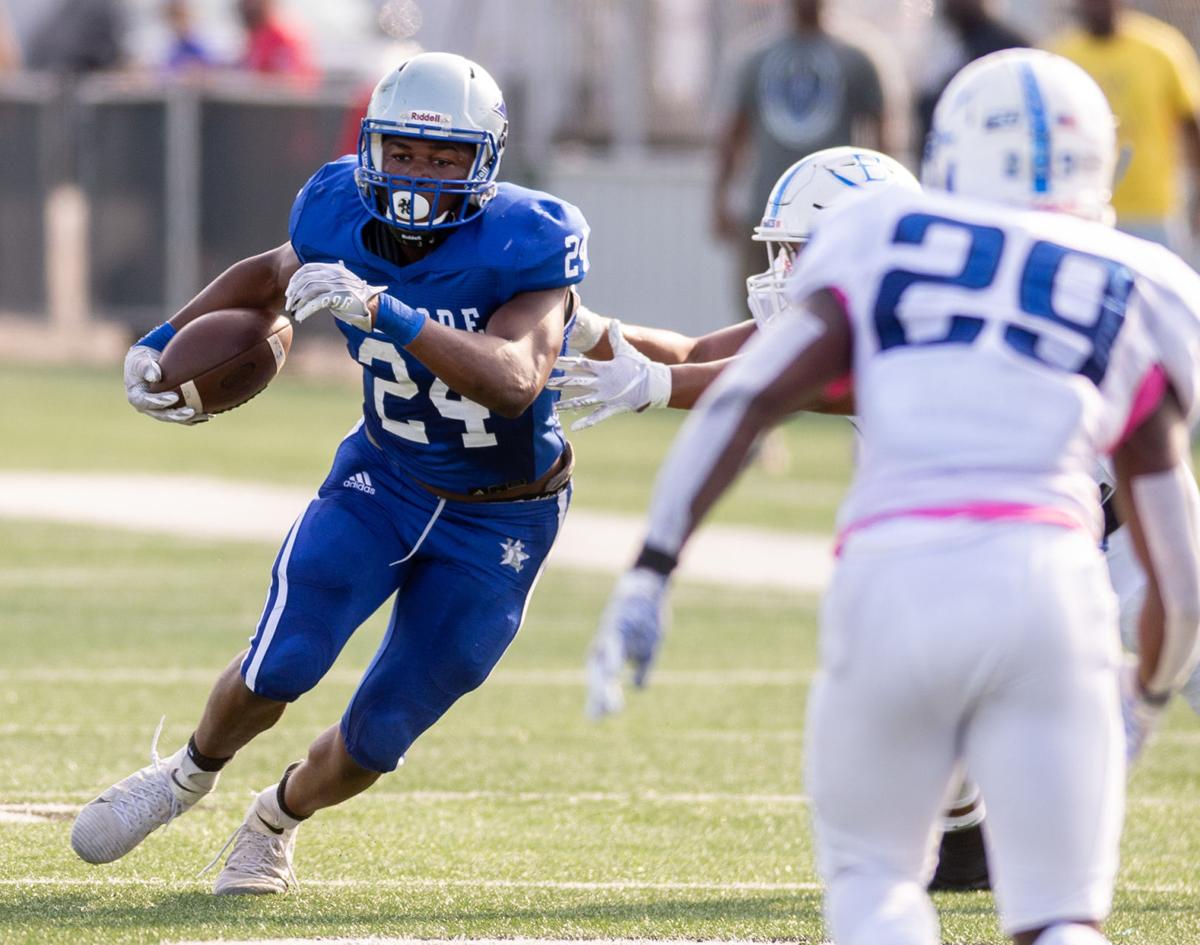 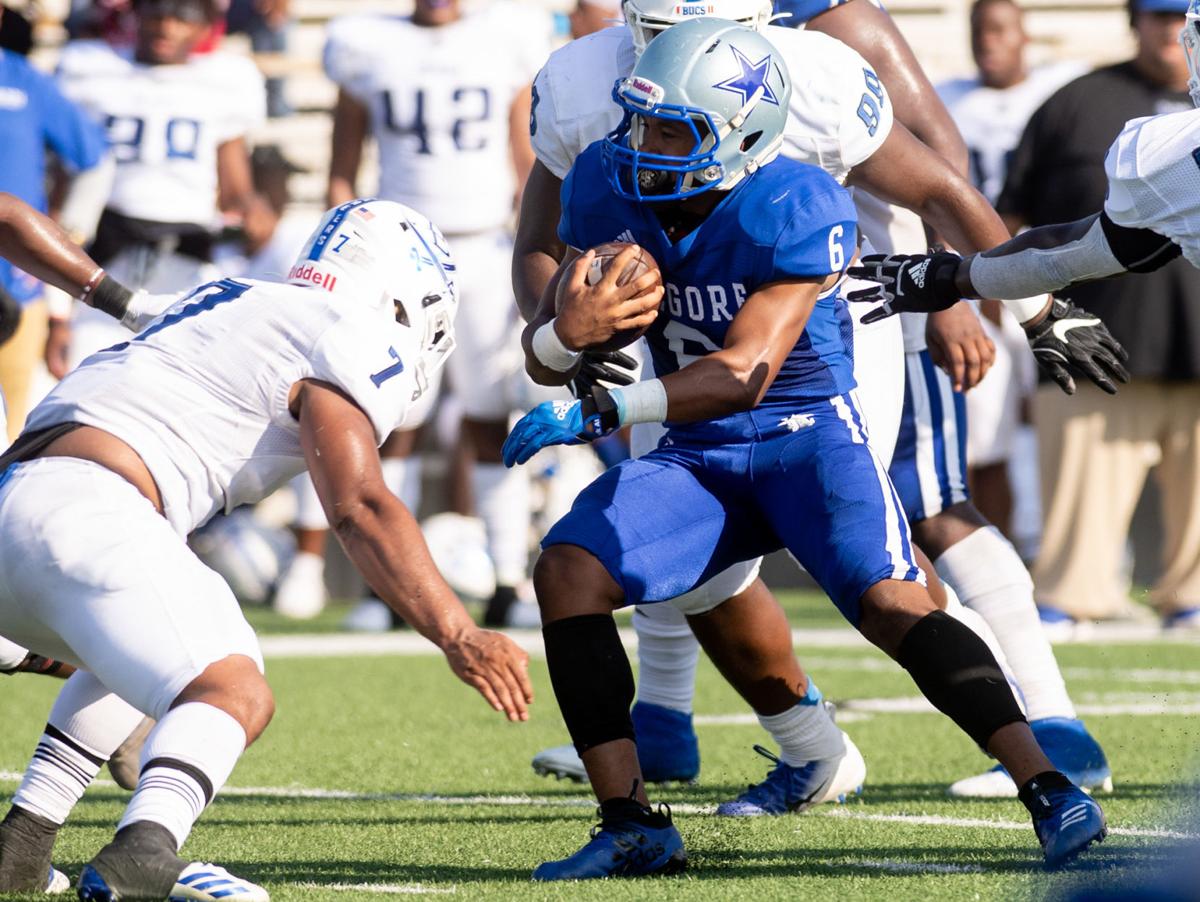 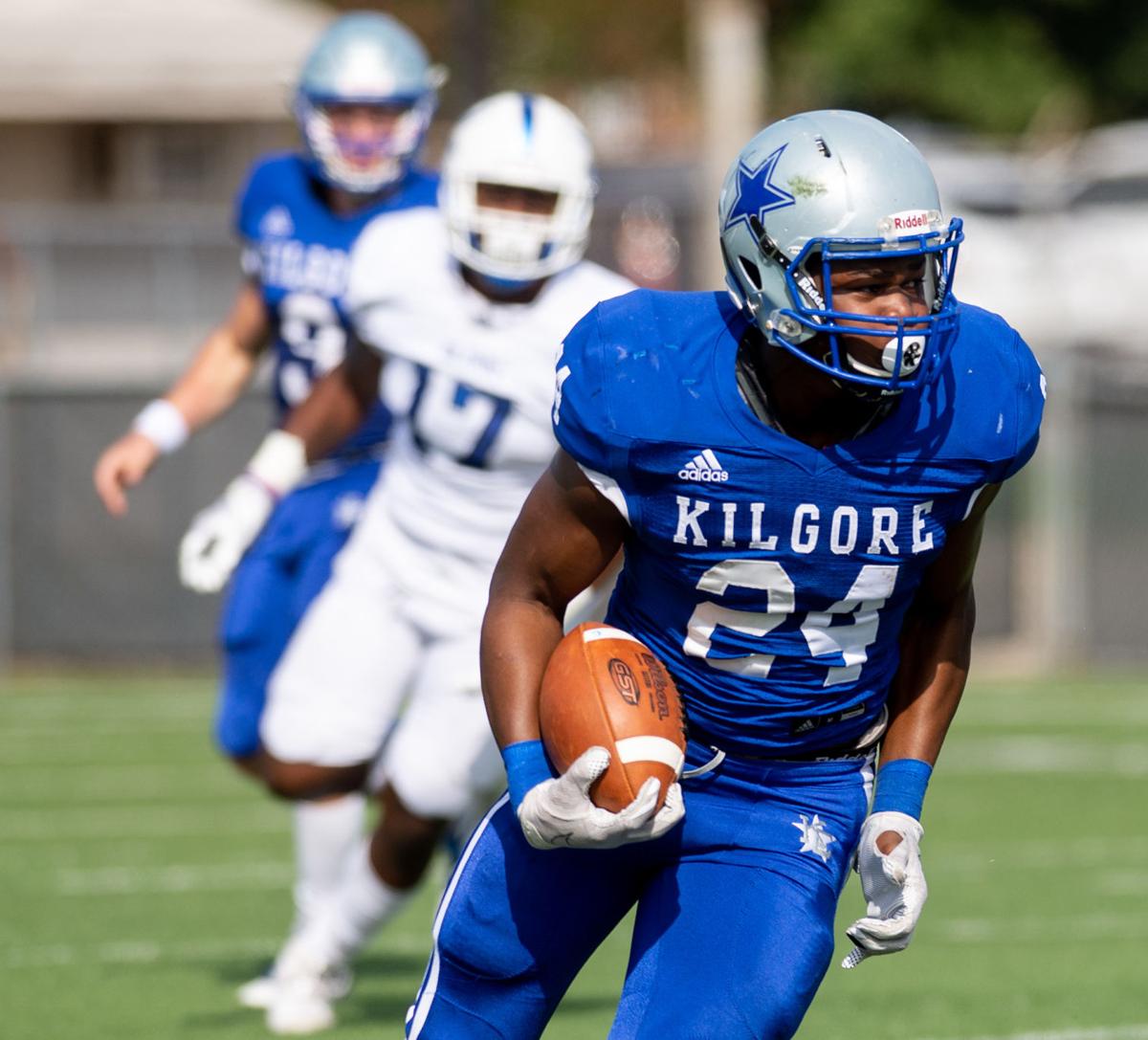 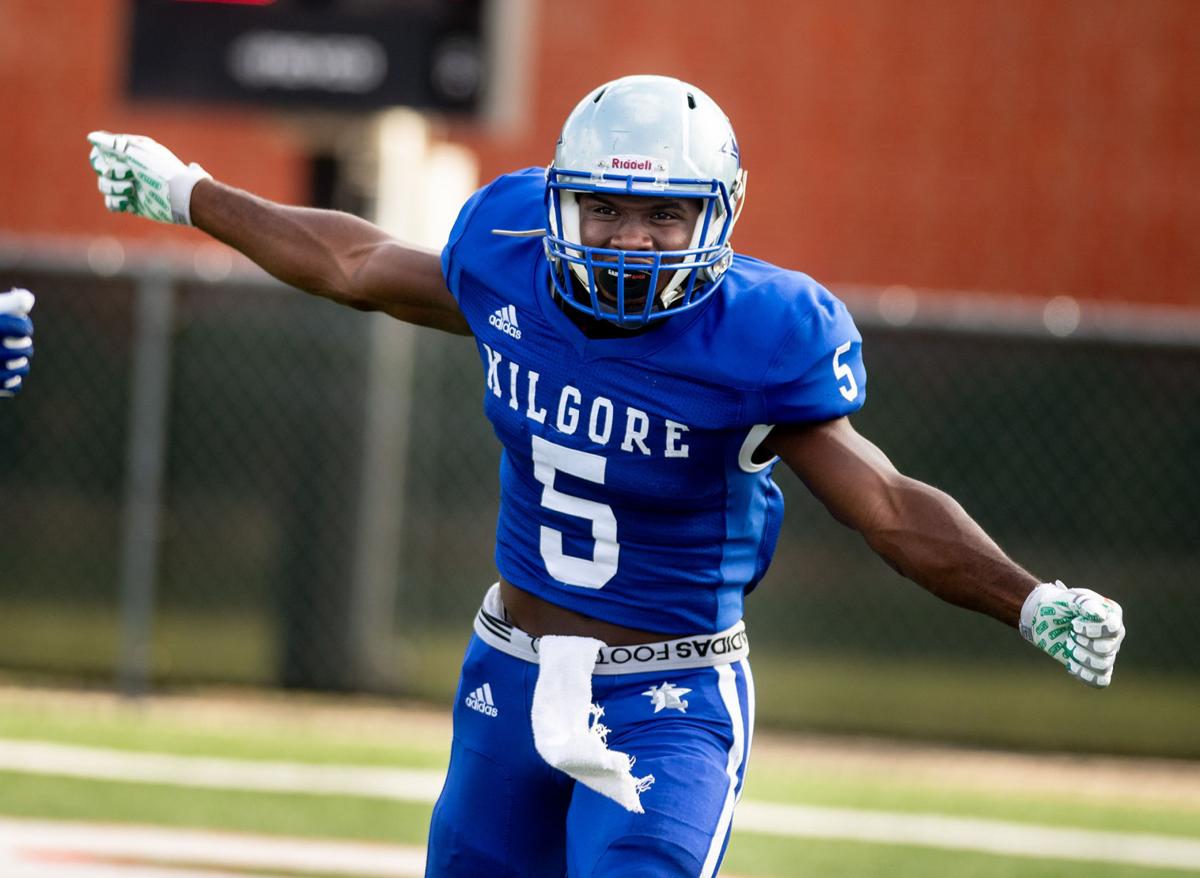 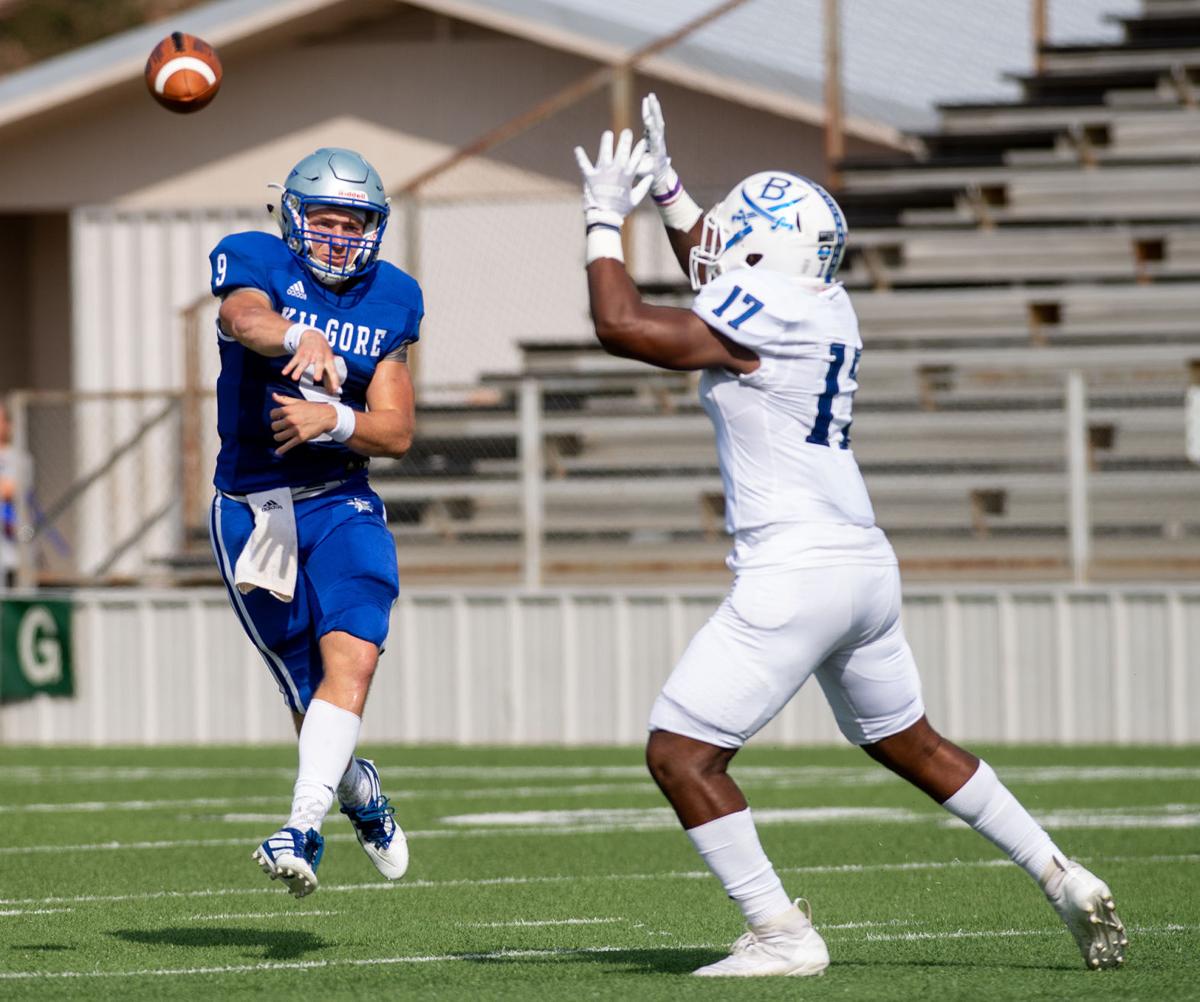 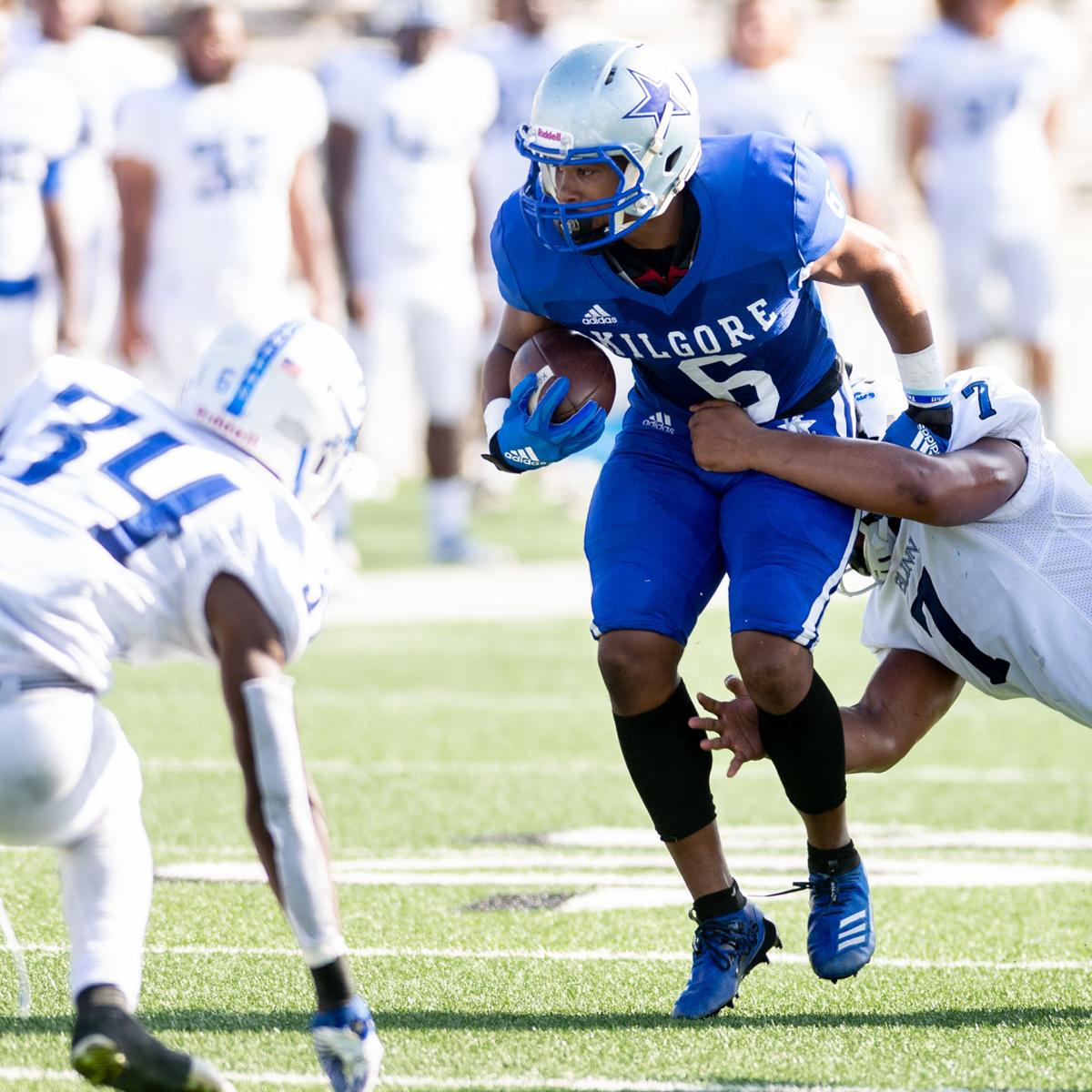 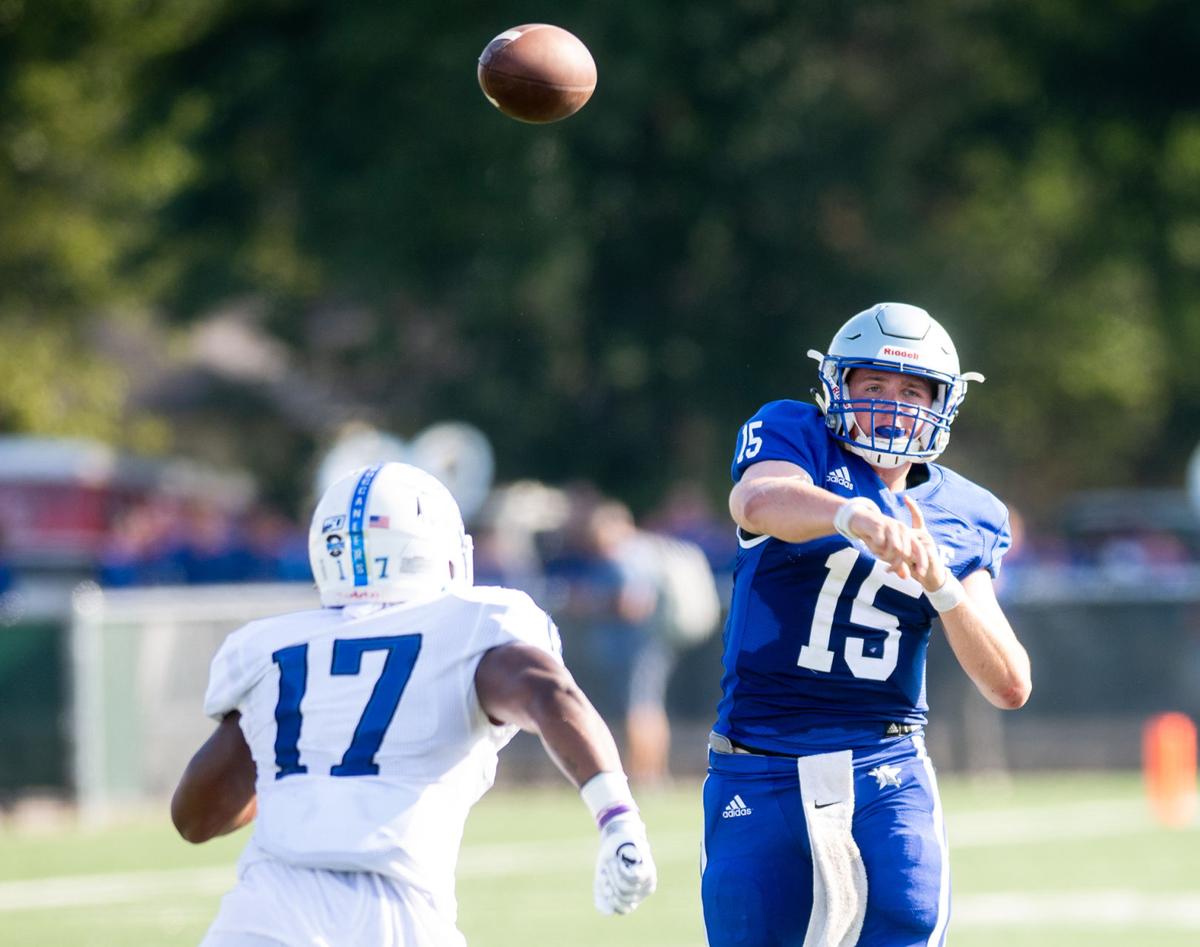 KILGORE — A time-consuming drive to open the game followed by a couple of quick scores led to a big lead for Kilgore College as the No. 5 ranked Rangers sent a clear message to the rest of the Southwest Junior College Football Conference on Saturday at R.E. St. John Memorial Stadium.

Kilgore rolled to a 49-7 win over Blinn to celebrate homecoming, turning in a dominant defensive performance.

The road to the SWJCFC championship will once again go through Kilgore.

The defending champion Rangers (7-1, 5-1) clinched at least one home game during the upcoming conference playoffs with Saturday’s win. Kilgore will close out the regular season at Tyler next Saturday, and then enter the playoffs as either the No. 1 or No. 2 seed.

This one was never in doubt as the Rangers built a 21-0 lead after one quarter and led 35-0 at the half. Kilgore piled up 228 rushing yards, led by Earnest Crownover’s 85 yards on just six carries.

Blinn, which entered the game averaging 501 yards per game — 310 through the air — finished with 237 total yards as KC harassed standout quarterback Brock Landis into an 18 of 39, 147-yard, three interception performance.

Antonio Brooks picked Landis off twice, and Jayce Bludau also had an interception. D.J. Harris came away with a sack and a fumble recovery.

The Rangers drove 80 yards in 11 plays to open the scoring with a 7-yard touchdown run by Gabe Douglas at the 5:34 mark of the first quarter.

A sack by Jadrian Taylor forceda Blinn punt on its first possession of the game, and two plays later the Rangers were back in the end zone when Jacob Frazier hit Kevin Latalus over the middle and Latalus outran the Buccaneer secondary for a 45-yard pitch an catch.

Blinn’s next drive also ended with a punt, and the Rangers’ Geovante Howard made a house call — sprinting 70 yards for the score and a 21-0 Ranger lead with 4:45 still remaining in the first period.

KC added two more scores in the second quarter on a 2-yard run by Cade Pearson and an 11-yard run by Da’Shawn Williams. Pearson’s run came after a 55-yard run from Crownover, and Brooks set up Williams’s TD with his first interception.

Blinn’s lone score came late in the third quarter on a 14-yard pass from Landis to Kadrian Hammond, but the Rangers tacked on a couple of fourth-quarter scores when Scooter Adams dived in from two yards out on the first play of the final quarter and Pearson scrambled for a 45-yard touchdown 10 minutes later to make the final 49-7.