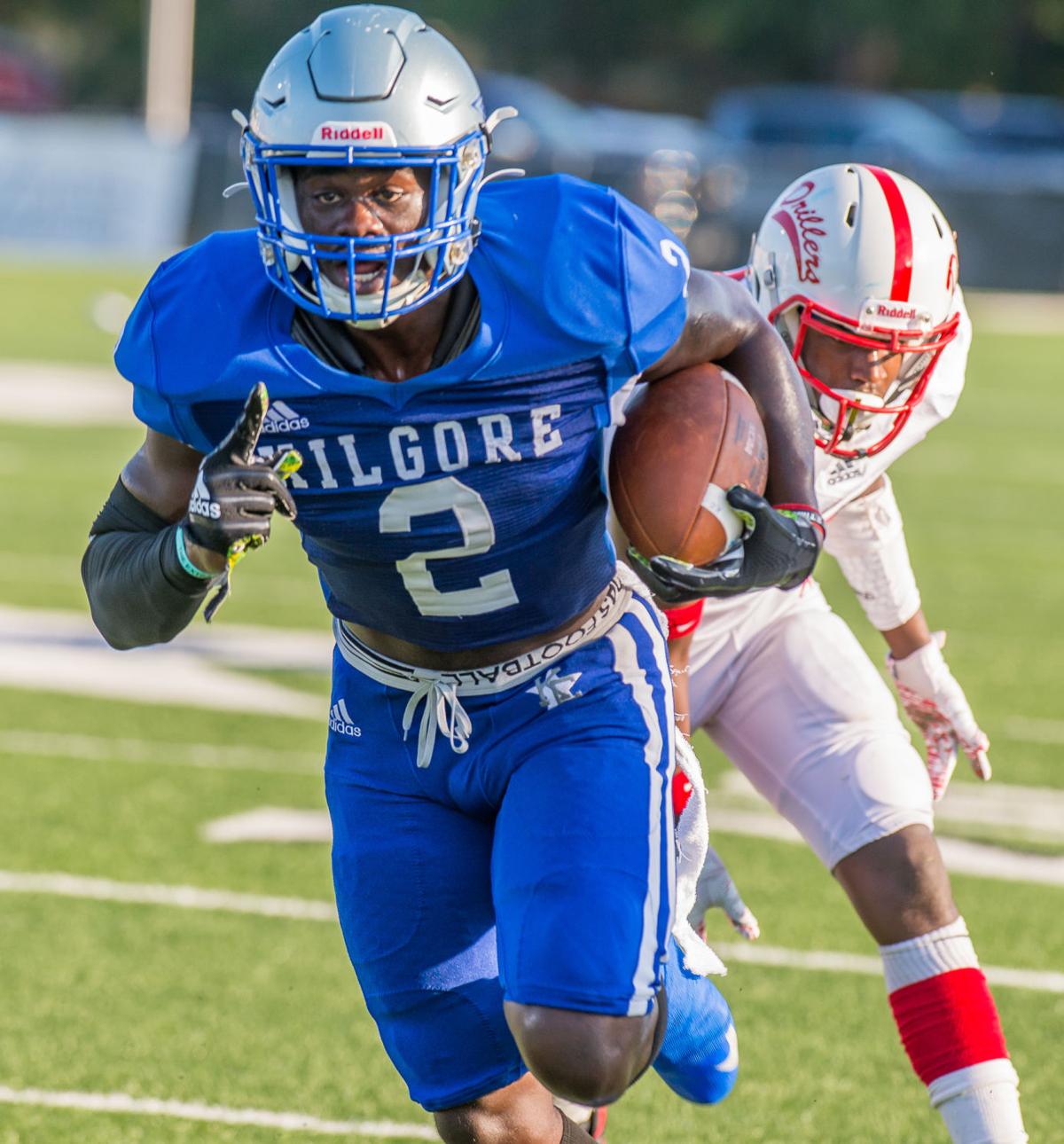 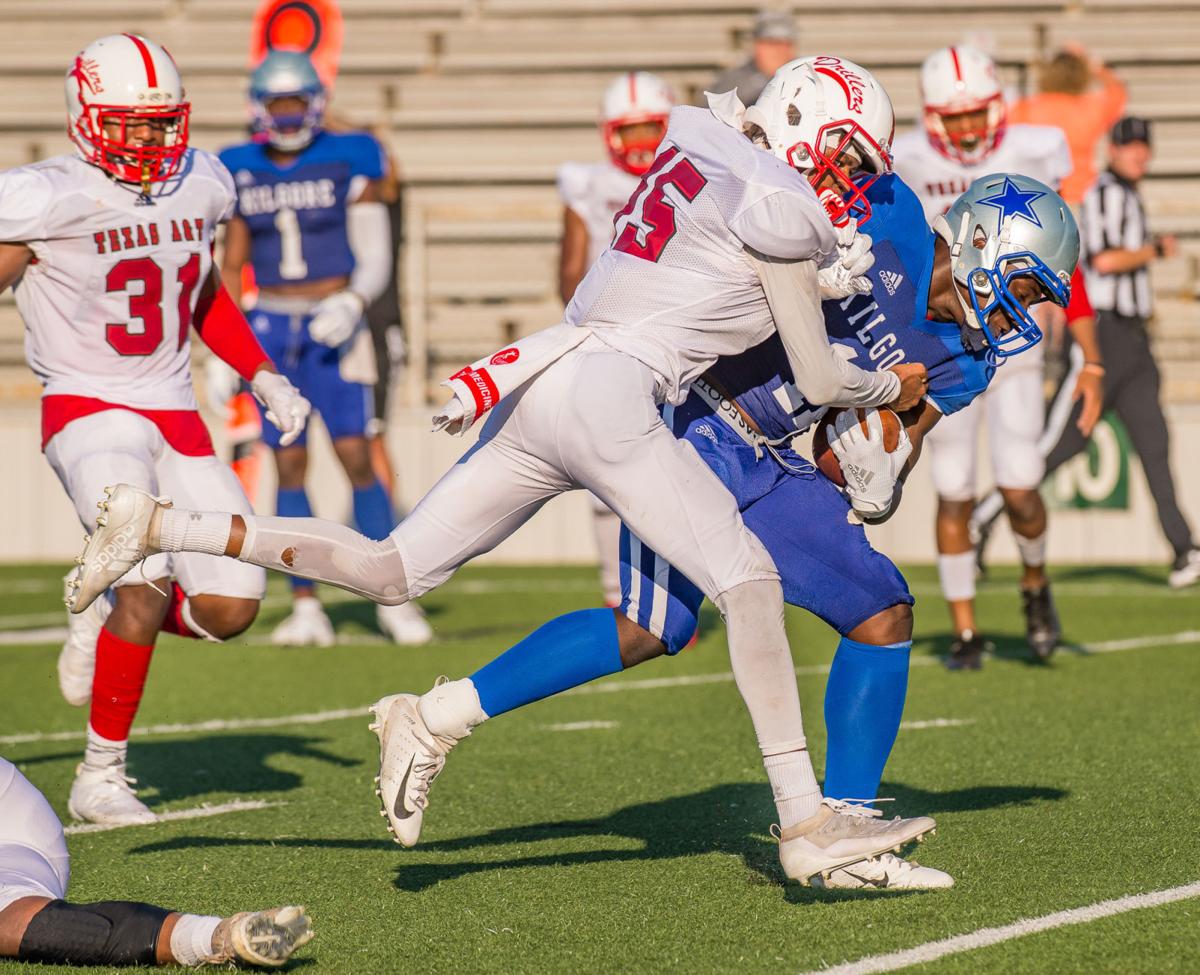 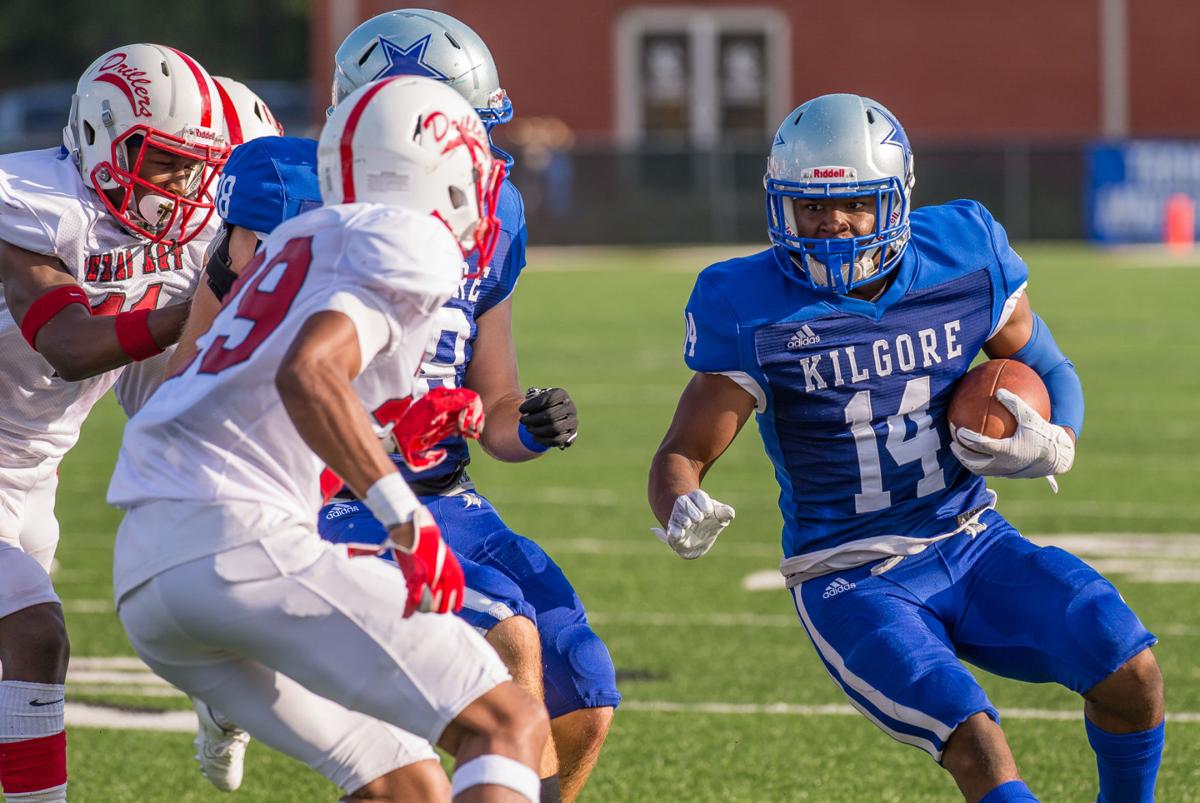 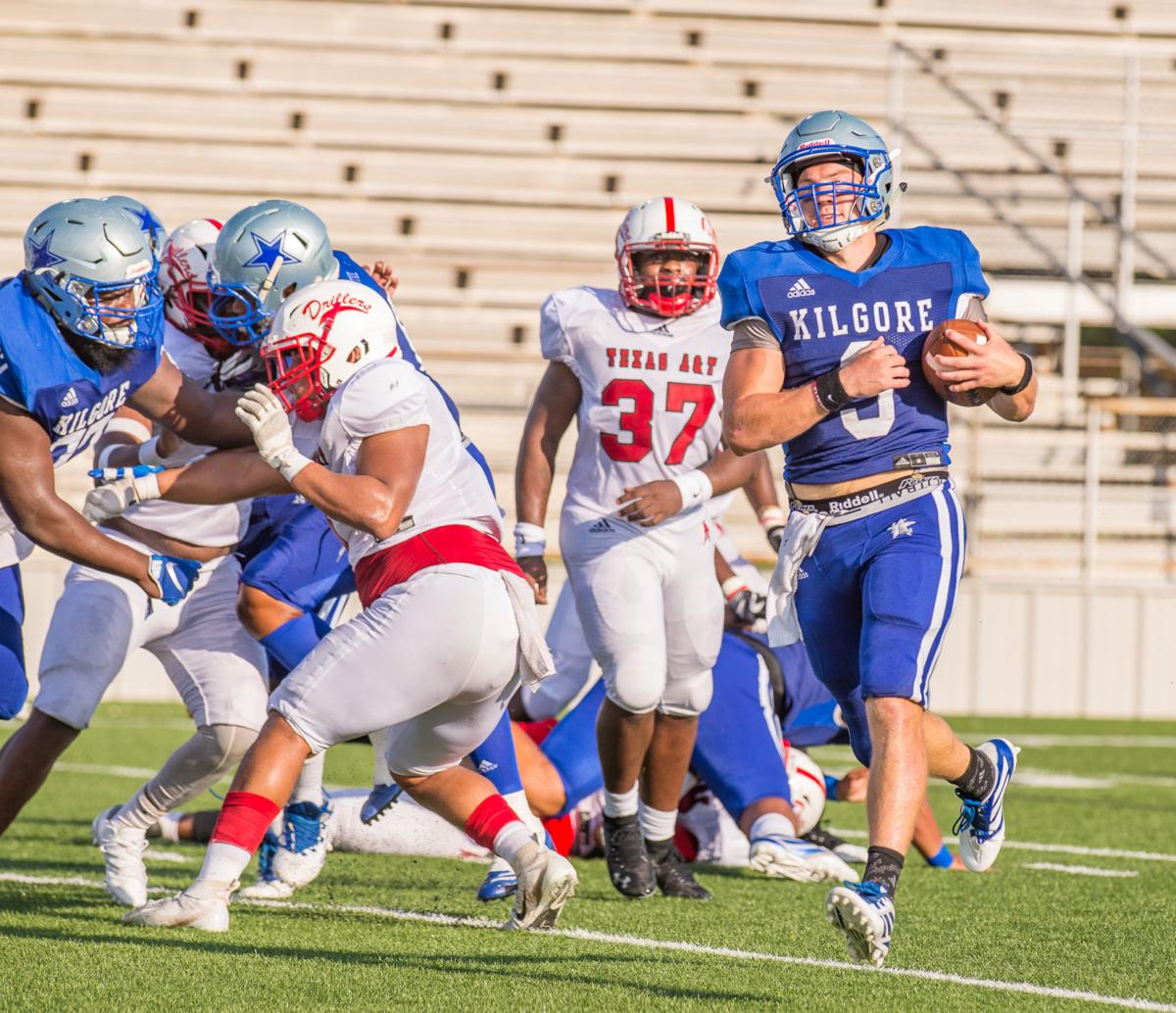 Kilgore College’s Jacob Frazier strides untouched into the endzone for a touchdown against Texas A&T on Saturday in Kilgore. 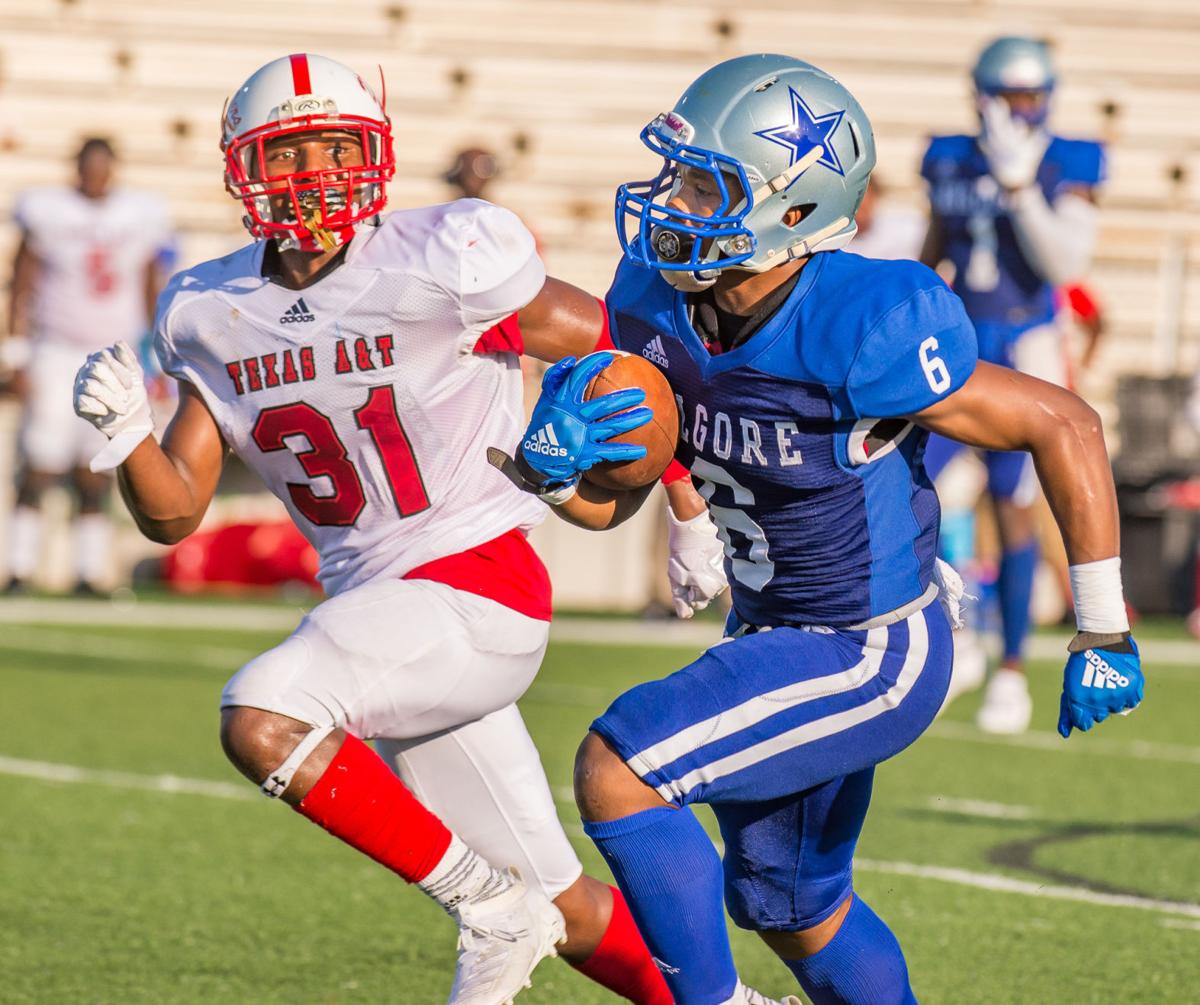 Kilgore College’s Scooter Adams breaks into the open for a touchdown that was called back during Saturday’s September 28, 2019 game against Texas A&T. (Les Hassell/News-Journal Photo) 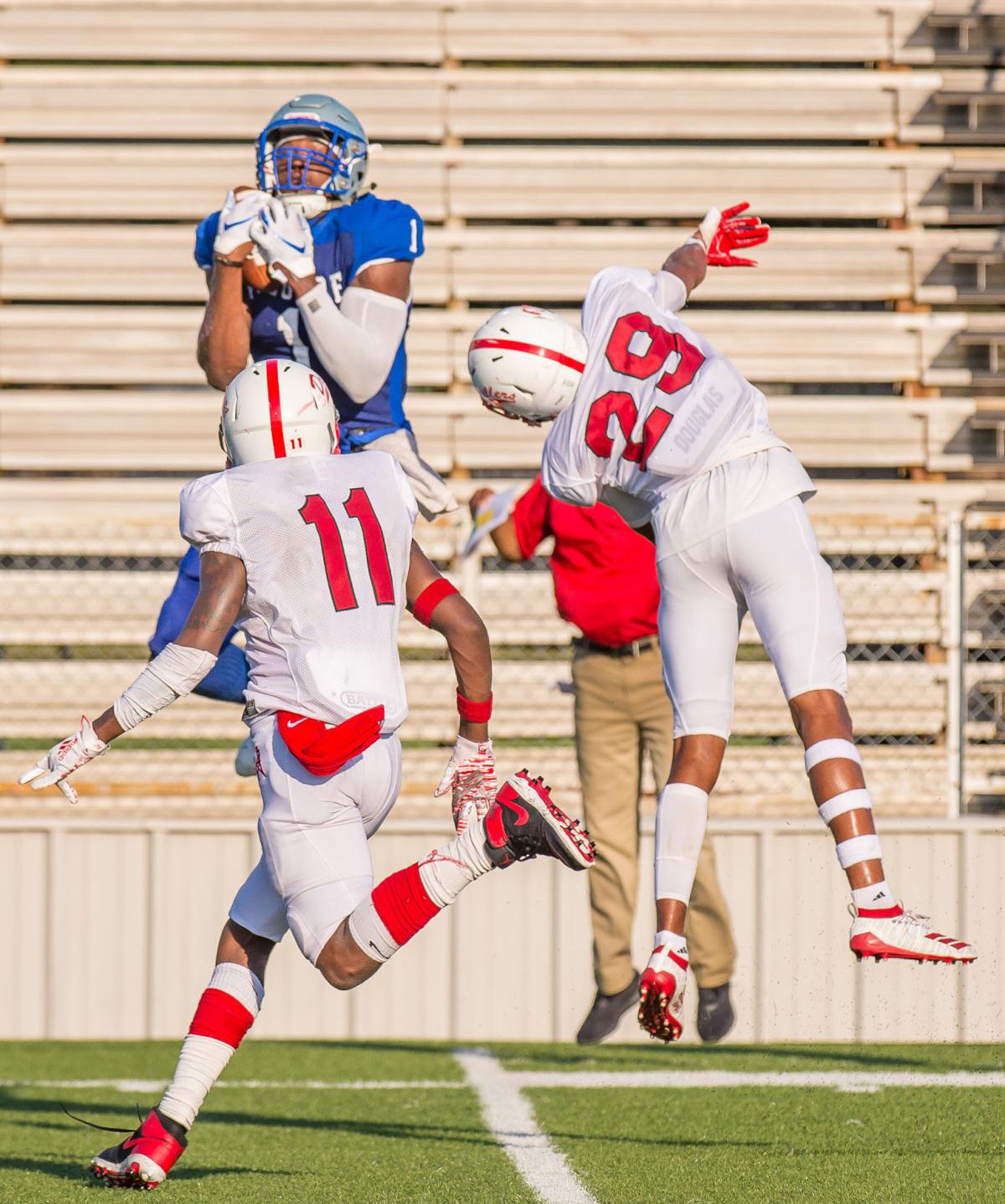 Kilgore College’s Omar Manning pulls down a pass against Texas A&T on Saturday in Kilgore. 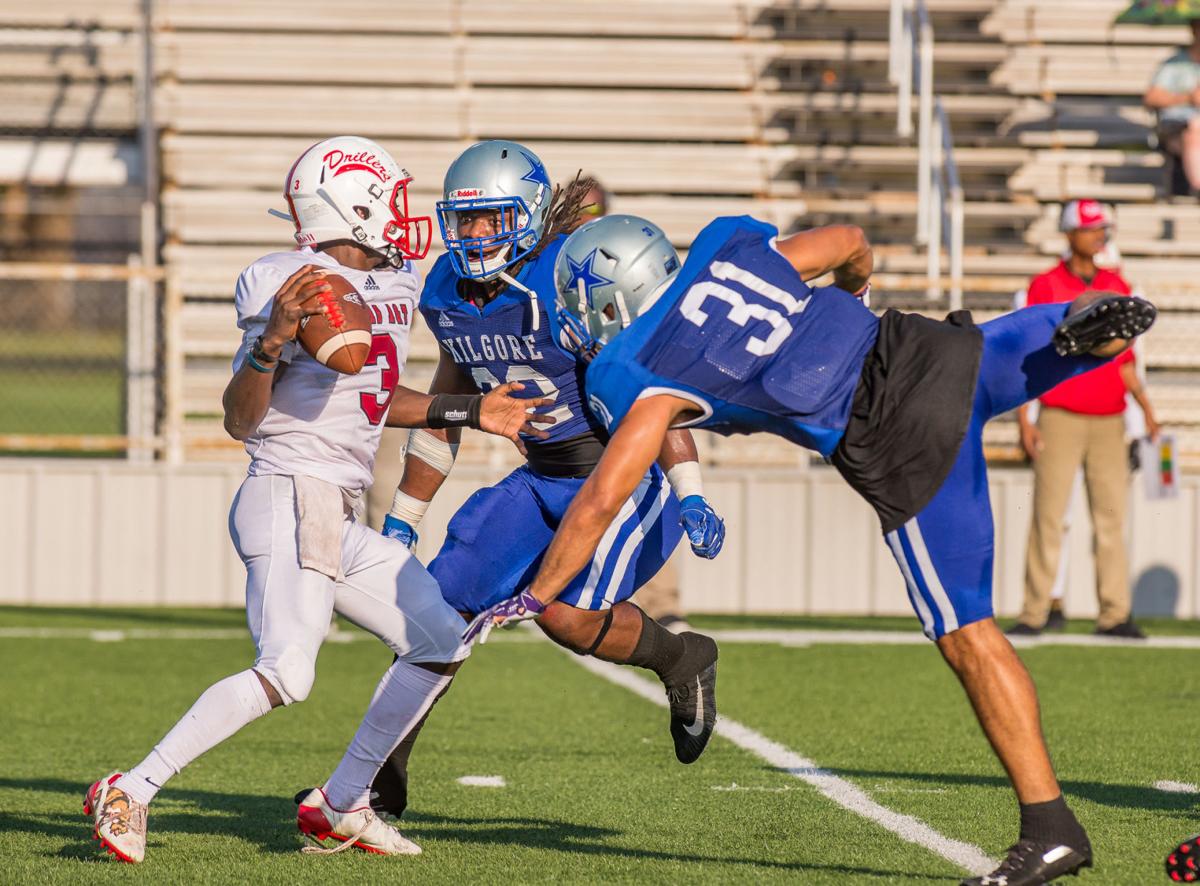 Kilgore College’s Jacob Frazier strides untouched into the endzone for a touchdown against Texas A&T on Saturday in Kilgore.

Kilgore College’s Scooter Adams breaks into the open for a touchdown that was called back during Saturday’s September 28, 2019 game against Texas A&T. (Les Hassell/News-Journal Photo)

Kilgore College’s Omar Manning pulls down a pass against Texas A&T on Saturday in Kilgore.

KILGORE — With one final test before heading into a tough stretch run of games to close out Southwest Junior College Football Conference play, the No. 7 ranked Kilgore College Rangers welcomed the Texas A&T Drillers to R.E. St. John Memorial Stadium on Saturday.

KC played the part of generous host for one half before turning things over to a stingy defense and scoring at will on offense en route to a 70-14 win.

The Rangers, now 5-1 on the season, will visit No. 13 Trinity Valley next Saturday in what could be a battle between the top two teams in the SWJCFC depending on the outcome of TVCC’s late Saturday game against Cisco. KC and TVCC were both 3-1 in league play heading into Saturday’s action.

Blinn, 2-1 against the conference, was idle on Saturday.

Texas A&T made a game of it in the first half, falling behind 21-0 and 28-7 before scoring with just 21.2 seconds showing on the second quarter clock to make it a respectable two-touchdown game.

The Rangers rolled up 540 total yards offensively — 307 rushing and 233 through the air, and eight KC players found their way to the end zone.

The KC defense allowed 213 total yards, but most came before halftime. The Drillers managed 56 total yards in the second half, and eight off Texas A&T’s 12 rushing attempts went for negative yardage.

Kilgore finished the night with three interceptions, and — fittingly — ended the game on a fumble recovery by former Longview standout Jephaniah Lister as time expired.

Kilgore took a 14-0 lead in the opening quarter on a 1-yard run by Frazier at the 7:48 mark and a 13-yard TD pass from Frazier to Douglas with just under two minutes remaining.

Chauncey Martin’s 15-yard run early in the second quarter gave the Rangers a 21-0 lead, but the Drillers got on the board with a 6-yard run by Cedrick Montgomery at the 10:22 mark.

Frazier’s 2-yard run with 5:54 left in the half boosted the Kilgore lead to 28-7, but Montgomery hit Semaj Trahan on a 1-yard TD pass with 21.2 seconds remaining.

A Frazier-to-Williams 51-yard connection on the next play sent KC into the break leading 35-14, and on the first play after the half Frazier and Williams hooked up again — this time on a 59-yard pitch and catch — to make it a 42-14 contest.

KC turned things over to the ground game after that, getting TD runs of 5 yards by Crownover and 24 yards from Glinton in the third period and scoring jaunts of 2 yards by Pearson and 16 yards by Griffin in the final stanza.

Kickoff for Saturday’s game at Trinity Valley is set for 7 p.m. KC will then enjoy an open date before hosting No. 8 Blinn on Oct. 19 and visiting arch-rival Tyler on Oct. 26.