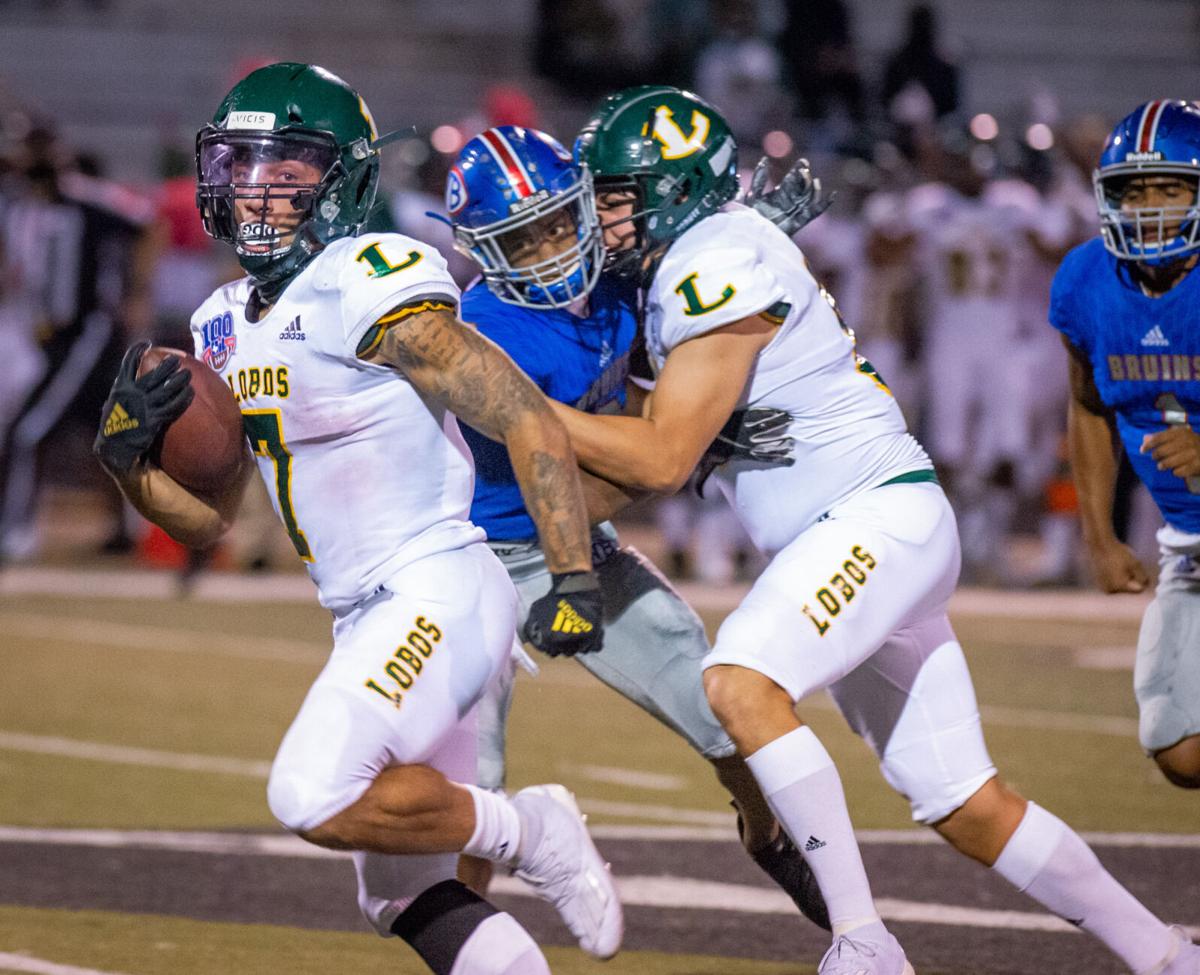 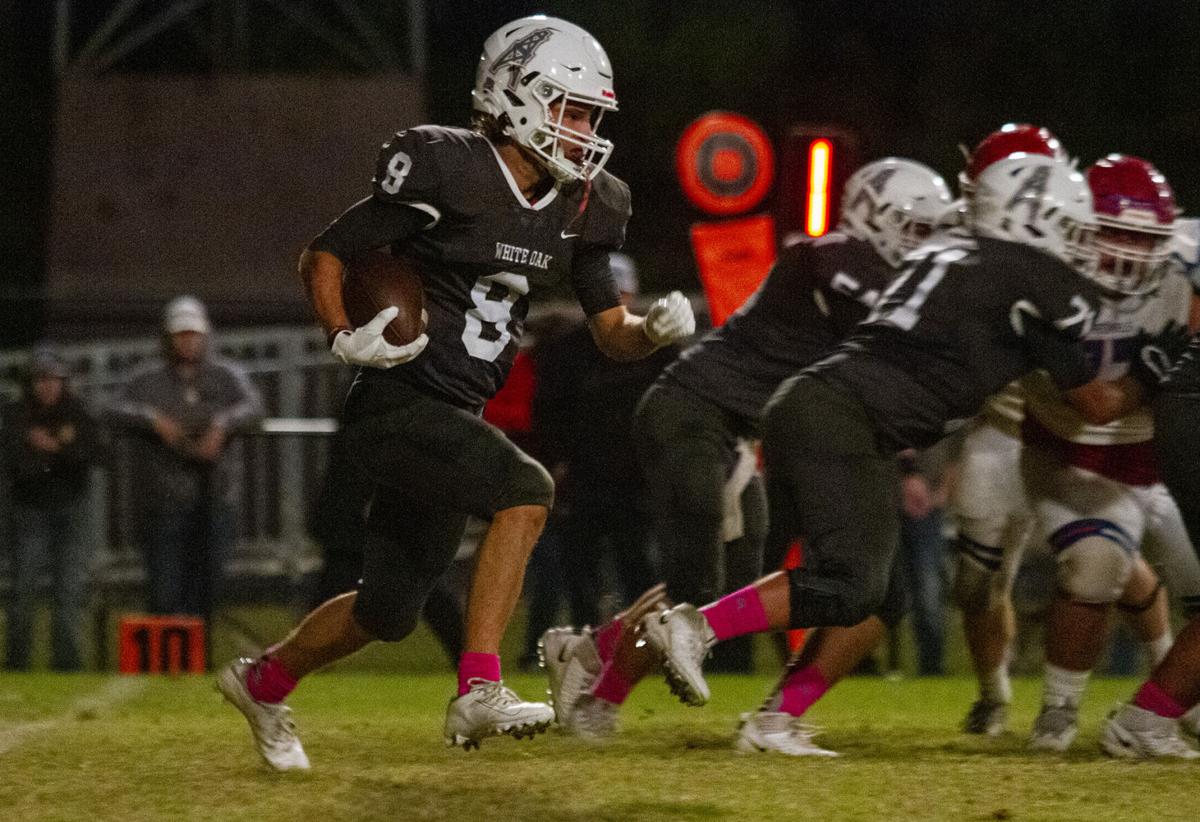  Trayveon Epps, Kilgore: Epps carried 26 times for 401 yards and scored six touchdowns in the Bulldogs’ win over Chapel Hill. The rushing yards and touchdowns are both school records.

 Brandon Tennison, Gilmer: Tennison completed 22 of 29 passes for 332 yards and four touchdowns in a win over Pittsburg.

 Mason Courtney, Carthage: Courtney rushed for 179 yards and three touchdowns in a 35-18 win over Jasper.

 Daymien Smith, Tatum: Smith returned an interception 25 yards for a touchdown and added a pair of rushing TDs in the Eagles’ 44-20 win over Atlanta.

 Blake Blain, Bullard: Blain completed 13 of 22 passes for 243 yards and five touchdowns in the Panthers’ 48-21 win over Brownsboro.

 Jackson Frazier, Colton Cobb, Rylie Redden and Michael Stevens, White Oak: Frazier carried 44 times for 181 yards and a touchdown in the Roughnecks’ win over Sabine. Cobb recorded 10 tackles and an interception. Redden had eight tackles, a tackle for loss, a forced fumble and two passes defended, and Stevens finished with 12 tackles.

 Daylon Branham and Ty Francisco, Sabine: Branham had 16 tackles and two tackles for loss, and Francisco recorded 15 tackles and an interception in the Cardinals’ loss to White Oak.

 Cole Watson, Tsean Hamilton and Mikeal Cooper, Waskom: Watson passed for 57 yards and a TD and carried 12 times for 124 yards and three scores in the Wildcats’ 56-7 win over Queen City. Hamilton carried 19 times for 149 yards and a TD. Cooper had four tackles, two tackles for loss, two sacks and a forced fumble.

 Hunter Eitel and Aron Bell, Harmony: Eitel had nine tackles, and Bell finished with six tackles, a fumble recovery and two tackles for loss in a 24-19 win over Troup.

 Zaylon Jeter and Ishmael Allen, Daingerfield: Jeter scored once on the ground and threw a TD pass, and Allen returned a fumble 89 yards for a touchdown in the Tigers’ 35-10 win over Redwater.

 Zach Conde, Braden Adams and Kayden Upchurch, Hawkins: Conde rushed for two touchdowns and completed 8 of 12 passes for 201 yards and a TD in the Hawks’ 37-34 win over Frankston. He also added three 2-point conversions. Adams carried 26 times for 138 yards and a TD, and Upchurch had 122 yards on 19 carries.

 Jacque Jones and Travion Ates Tyler: Jones rushed for 102 yards on 13 carries in a loss to Mesquite Horn. Ates had 13 tackles, two tackles for loss and a sack.

 Alex Jones and Owen McCown, Rusk: Jones carried 18 times for 193 yards and two touchdowns and McCown rushed for 114 yards and two scores and passed for 98 yards and a TD in the Eagles’ 37-29 win over Madisonville.

 Arik Williams and Jordan Jenkins, Lindale: Williams intercepted a pass — his fifth pick of the season — and returned it 95 yards for a TD in the Eagles’ 35-16 win over Athens. Jenkins rushed for 141 yards and three touchdowns.

 Ty Arroyo and Jarred Duff, Athens: Arroyo rushed for 78 yards and passed for 226 yards and a TD in the Hornets’ loss to Lindale. Duff caught eight passed for 102 yards.

 Trevion Sneed, Dawson Pendergrass and Kobe Kendrick, Mineola: Sneed carried 36 times for 301 yards, three touchdowns and a 2-point conversion and recorded 13 tackles and four QB pressures on defense in a 57-49 overtime win against Pottsboro. Pendergrass carried 19 times for 204 yards and four TDs, caught two passes for 23 yards and added eight tackles and an interception return for a TD. Kendrick racked up 13 tackles.