Skip to main content
You are the owner of this article.
Edit Article Add New Article
You have permission to edit this article.
Edit
Welcome, Guest
Home
Sports
Schools
Stats
The Zone
Columns
Photo Galleries
Pro
Player of the Week
1 of 5 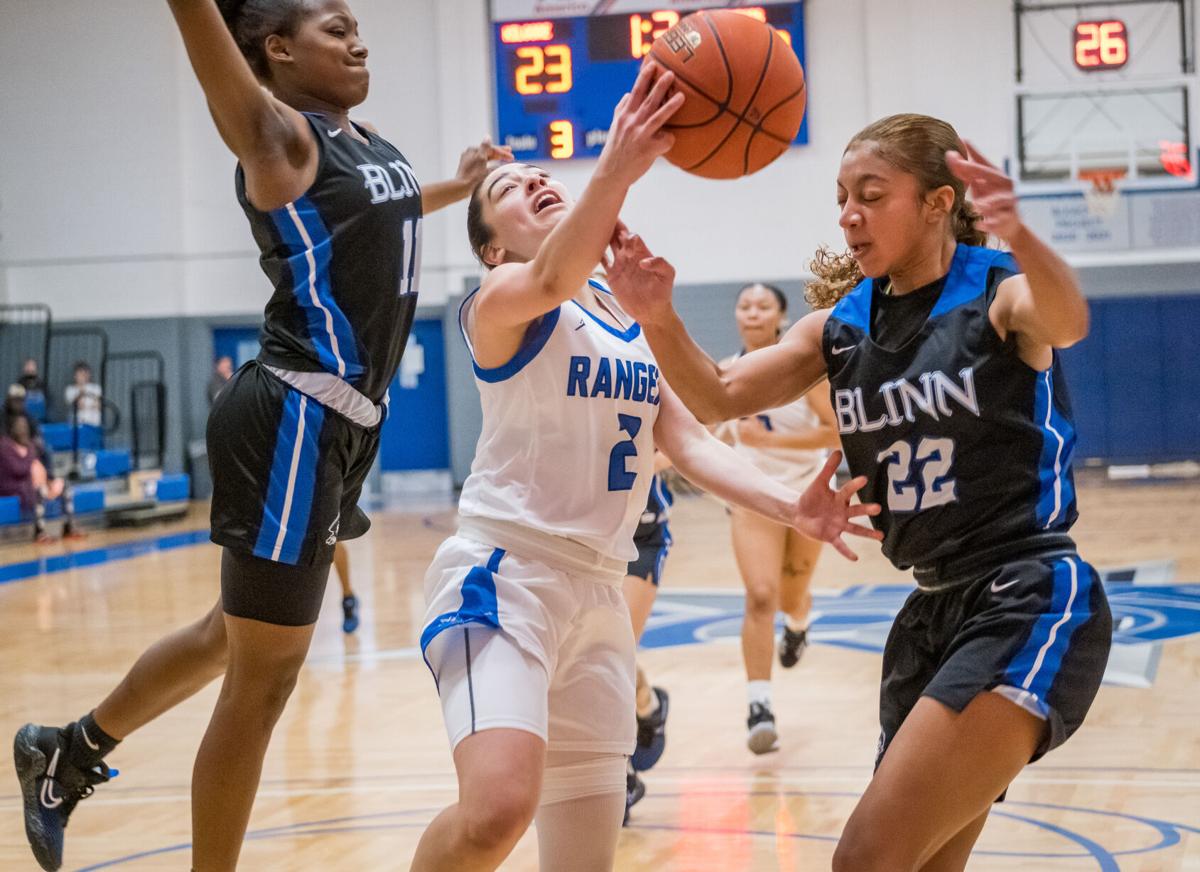 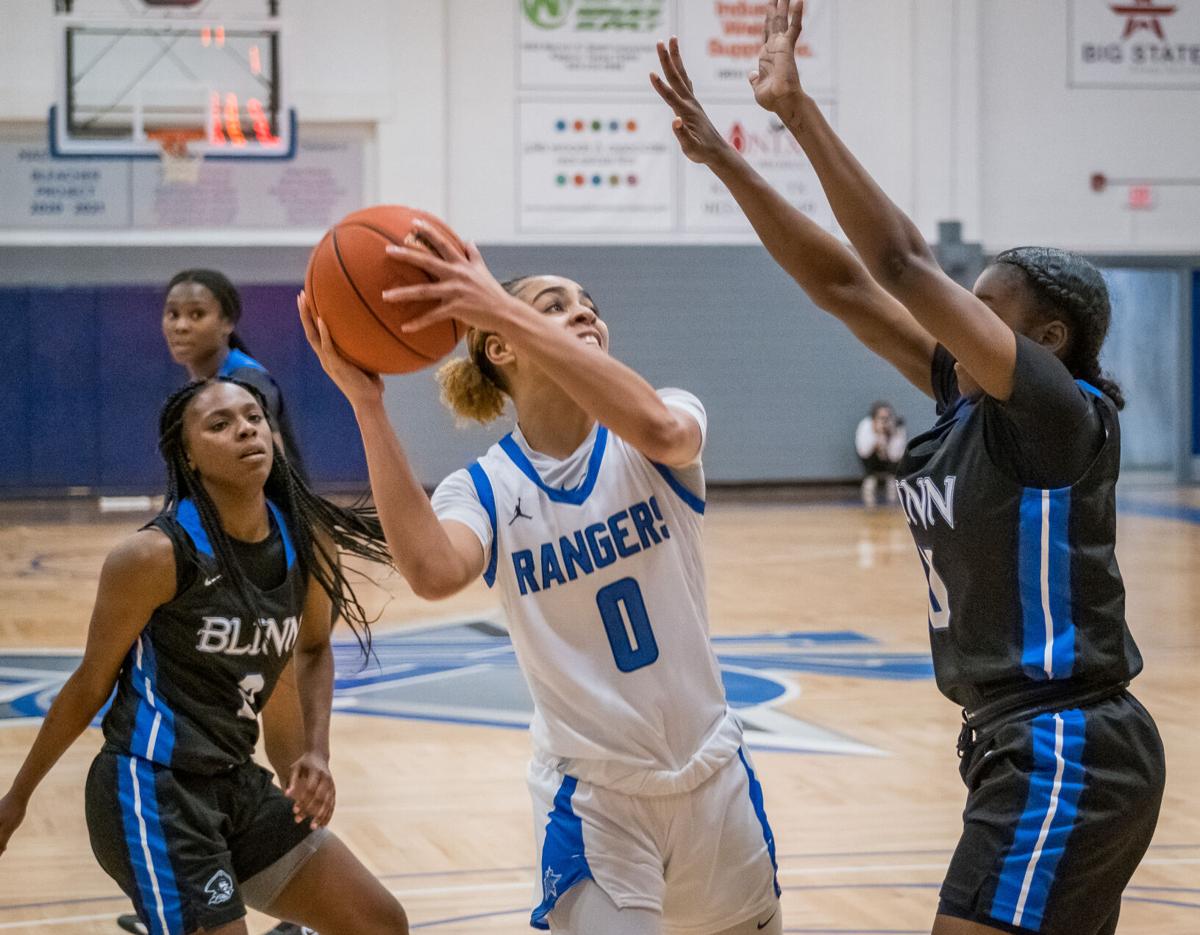 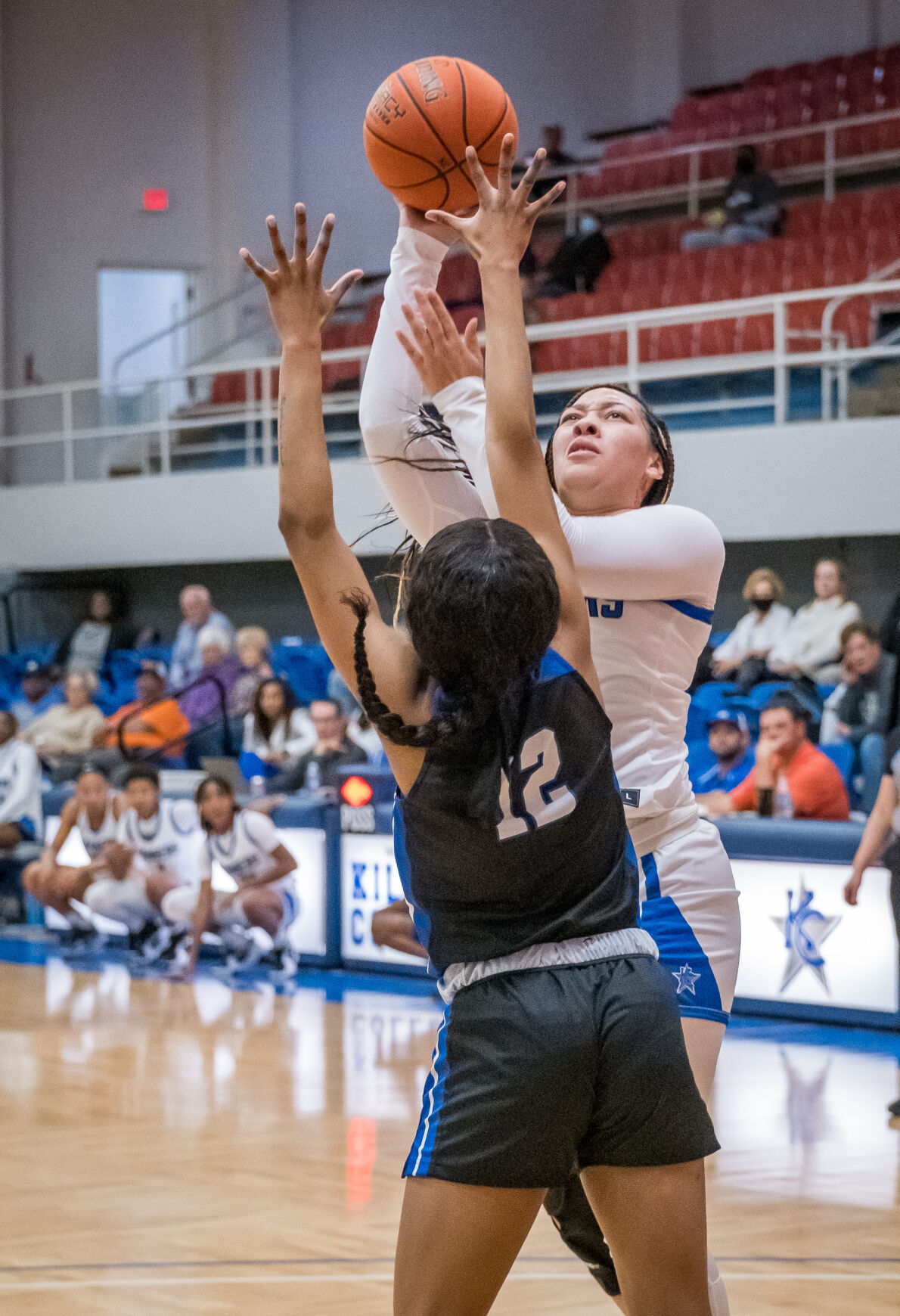 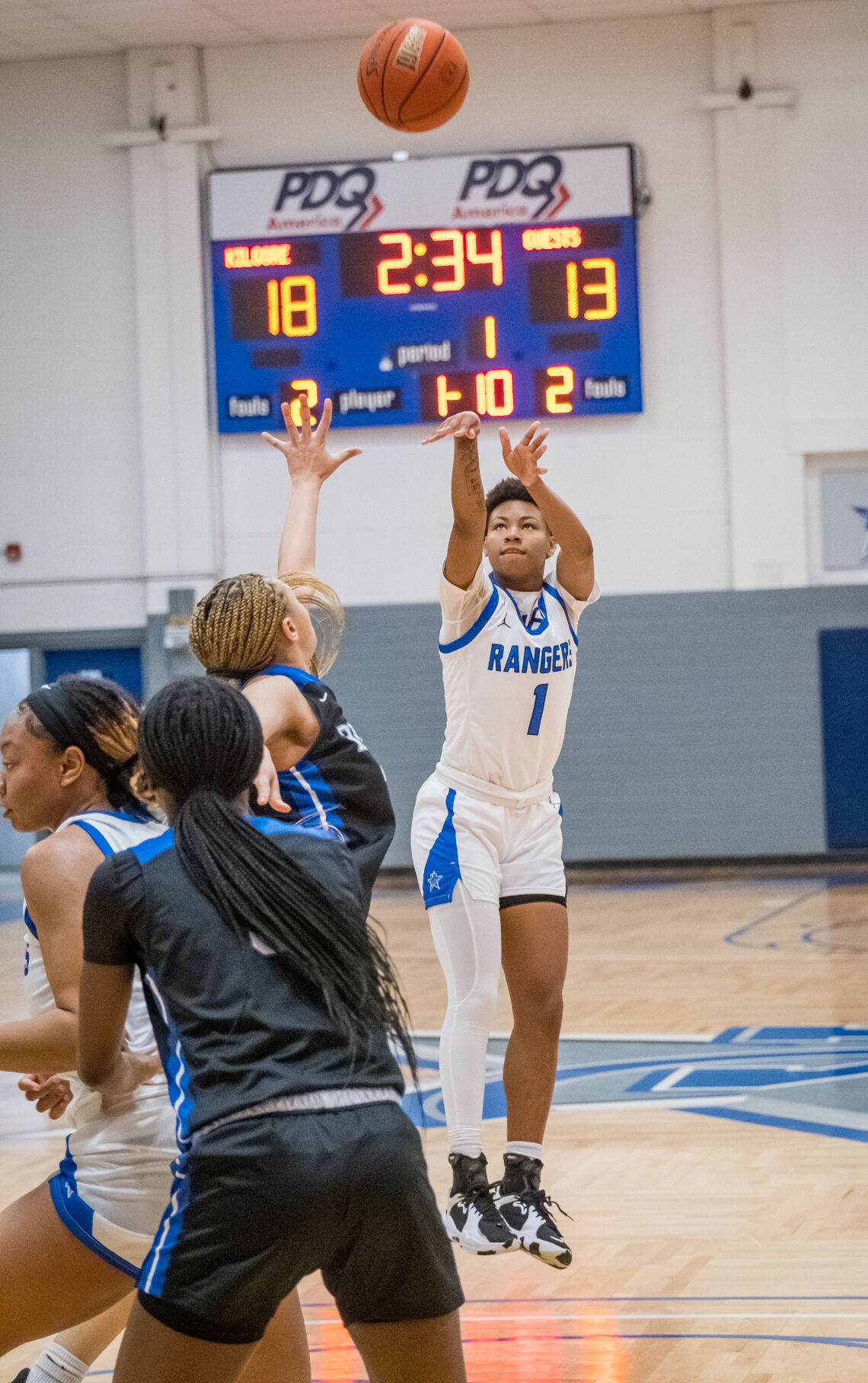 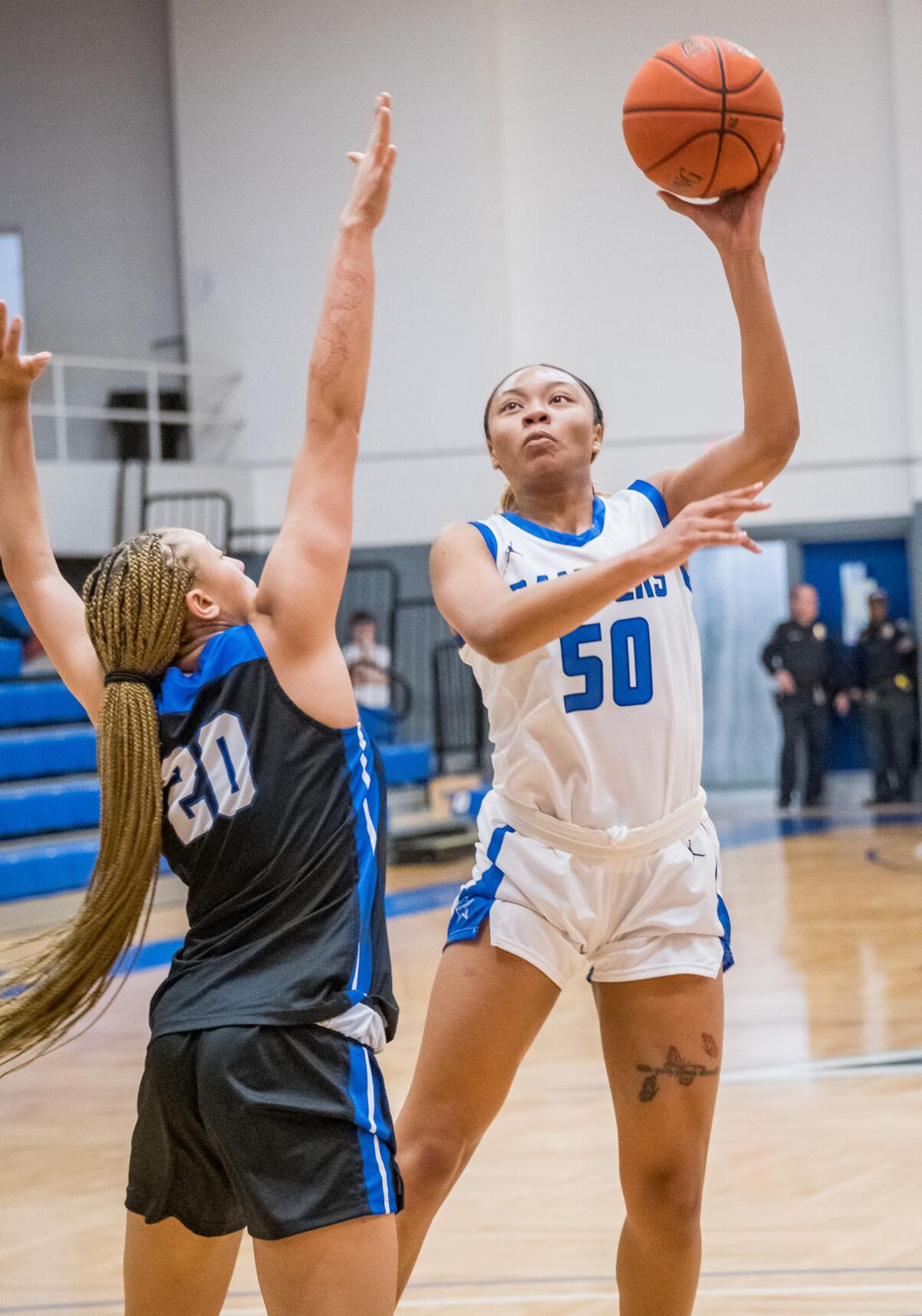 Kilgore College’s De’Asia Thomas takes a shot at the basket during Wednesday’s game against Blinn College.

Kilgore College’s De’Asia Thomas takes a shot at the basket during Wednesday’s game against Blinn College.

KILGORE – Two teams entered Kilgore College’s Masters Gymnasium with perfect records on Wednesday. The Kilgore College Lady Rangers and Rangers made sure only one left the house that way.

The KC women snapped a two-game losing skid and knocked off previously unbeaten and No. 17 ranked Blinn, 69-65, and the No. 2 ranked Kilgore College Rangers stayed perfect with an 80-59 win over Trinity Valley.

WomenIn the opener, the Lady Rangers led by 12 early and trailed by four in the second half before taking the lead for good when Kerrighan Dunn started and ended a modest 8-0 run with 3-pointers.

Dunn’s second triple in the mini-outburst helped KC take a 54-52 lead into the final stanza, and the Lady Rangers quickly pushed the lead to eight on a putback by Tara Kessner, a free throw from Tara Green and another 3-pointer from Dunn.

Blinn stormed back to narrow the gap to three, but a steal and layup by Dunn put the Lady Rangers on top 64-59 with 2:18 left.

Blinn’s Telisha Brown banked in a 3-pointer with 1:46 left to cut the deficit to a couple, but Rahmena Henderson took over down the stretch – rebounding her own miss and scoring and then sinking two free throws. A free throw from Vianey Galvan made it 69-62 and made Browns late 3-pointer a non-issue.

The Lady Rangers led by 12 late in a hot-shooting first quarter after a Dunn steal and 3-pointer and two freebies from Galvan. The Lady Rangers were 9-for-15 from the floor with five triples in the opening frame.

Brown had 23 in the loss for Blinn.

Quevian Adger had 21 and Jakevion Buckley 19 in the loss for TVCC.

The first half featured six ties and seven lead changes, and Kilgore held a slim 34-32 lead at the break before flipping the switch in the second half and turning things into a rout.

The Rangers scored the first eight points of the second half and went on a 15-1 run overall to take command. A back-in layup by Otieno and a triple from Taylor put Kilgore on top by 16 (49-33).

The lead hit 27 when Williams had a 3-pointer and a steal and layup, and TVCC was never able to get the deficit under 18 the rest of the way.