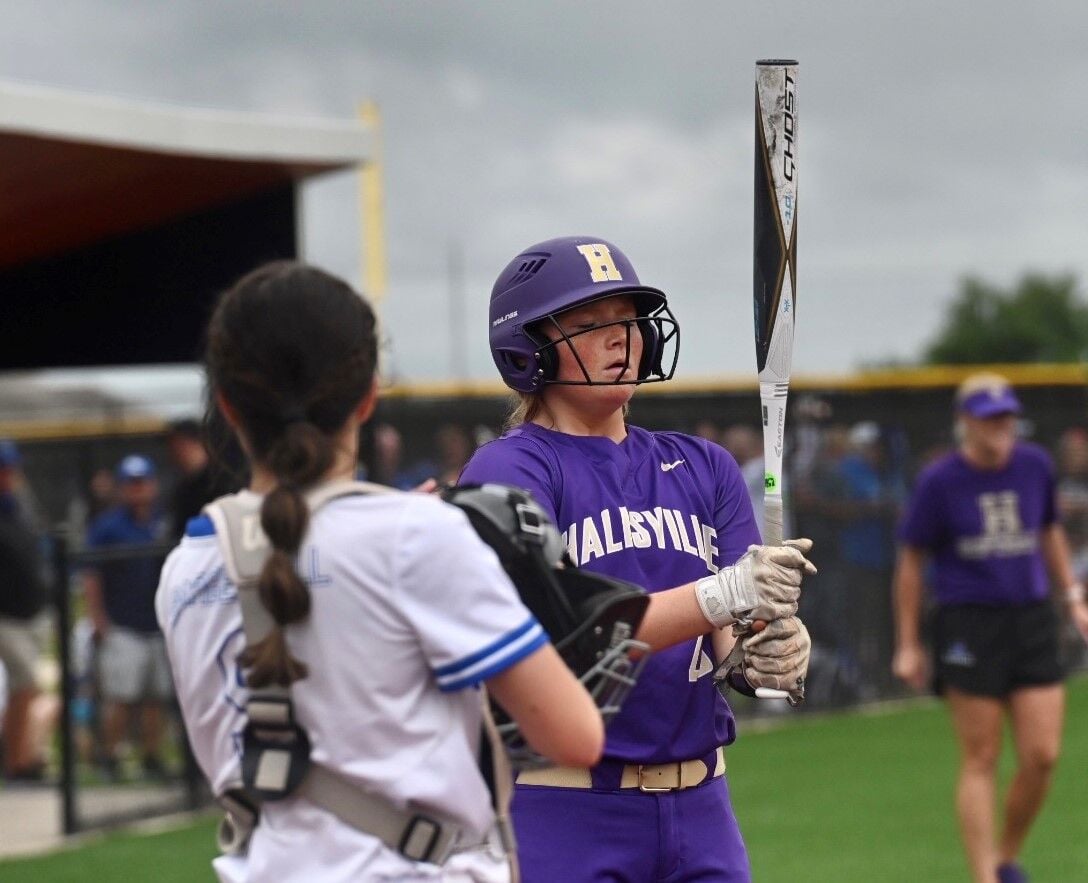 in the Class 5A semifinals Friday morning at Grizzly Diamond in Leander. (Brandon Ogden/Tyler Morning Telegraph) 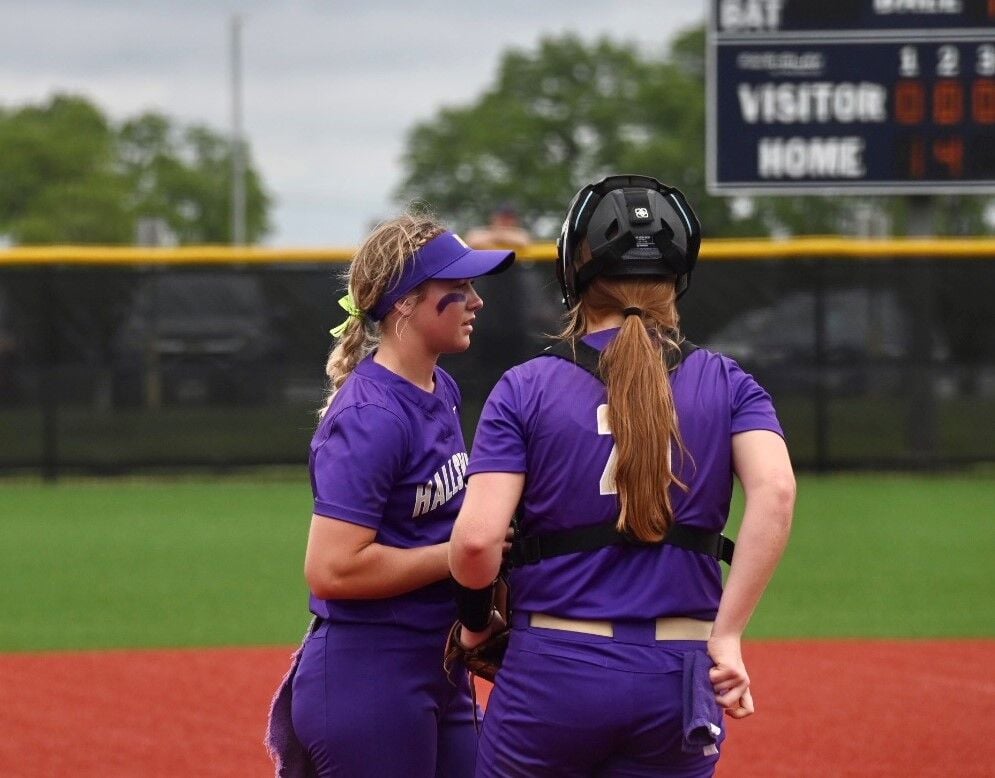 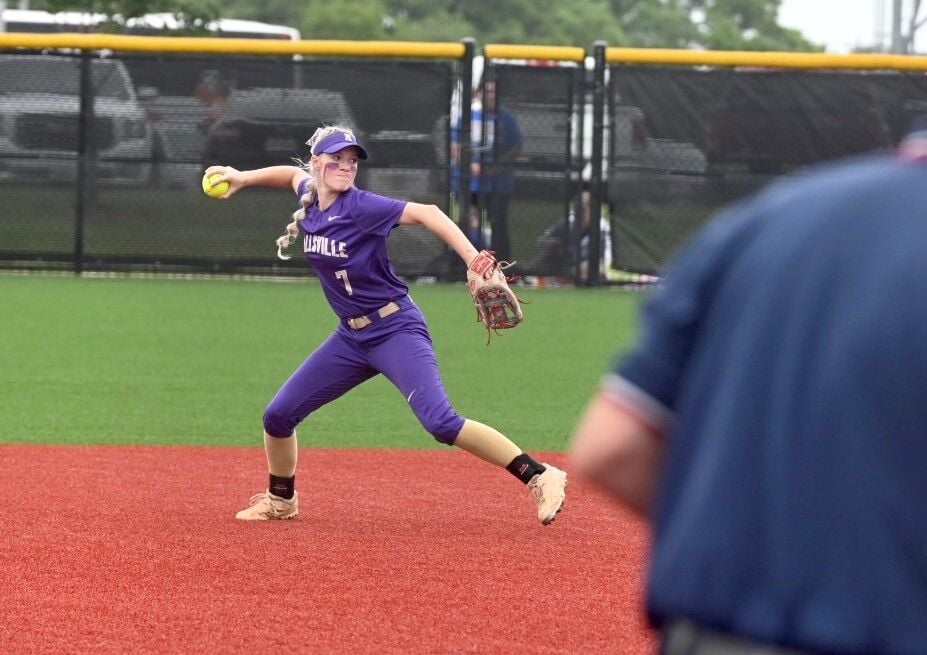 Hallsville’s Kammie Walker makes the throw to first against Barbers Hill in the Class 5A semifinals on Friday morning at Grizzly Diamond in Leander.

in the Class 5A semifinals Friday morning at Grizzly Diamond in Leander. (Brandon Ogden/Tyler Morning Telegraph)

Hallsville’s Kammie Walker makes the throw to first against Barbers Hill in the Class 5A semifinals on Friday morning at Grizzly Diamond in Leander.

LEANDER — Hallsville has boasted an explosive offense all season.

And going up against the dominant pitching of Mont Belvieu Barbers Hill, the Ladycats were aggressive early.

After Anahi Ramirez drew a one-out walk, Kammie Walker singled. Ramirez tried to advance to third but was thrown out on the play. From there, Samantha Landry held the Ladycats hitless as Barbers Hill took a 6-0 win over Hallsville in the Class 5A softball semifinals Friday morning at Glenn High School’s Grizzly Diamond.

Landry (17-1) — a University of Louisiana signee — finished the one-hit shutout with 12 strikeouts and four walks.

“I saw her make a few adjustments,” Hallsville head coach Kayla Whatley said. “And even us kind of getting our heads a little bit. But she’s good, and she knows how to hit her sports. She’s going where one of ours (Julie Rawls, who was on the previous Hallsville team to advance to the state tournament in 2015) just graduated from. We wish the best of luck to her and that whole team. We just didn’t come out and do what we needed to do.”

It was the 33rd shutout of the season by the Barbers Hill pitching staff. The Lady Eagles have had consecutive shutout streaks of 13 and 12 games this season with the tandem of Landry and University of Texas signee Sophia Simpson.

Hallsville entered the game averaging 8.6 runs per game and had scored double digits 15 times this season, including four in the playoffs, which was capped off by a 17-4 win over Lucas Lovejoy in Game 2 of the Class 5A Region II finals.

“They’ve played so well,” Whatley said. “I hate to end on a note like that with just one hit. But our offense has been so good, going through this whole series of playoff games and through district. But we know that they have two great pitchers, and we knew that going into it.”

Barbers Hill got on the scoreboard in the bottom of the first inning with an RBI groundout by Estela Garza.

Maddie Melton drew a four-pitch walk to lead off the top of the second before Landry struck out three straight batters.

Barbers Hill’s big inning came in the bottom of the second. Kateyn Cooper reached on an error, and Reagan Duty followed with a two-run home run to center field. Kaylee Hornberger added a two-run single in the inning to give the Lady Eagles a 5-0 lead.

Hallsville got two runners on in the fourth inning as Sara Houston and Makayla Menchue walked, but Landry came back with another punchout to end the threat.

Barbers Hill tacked on another run in the bottom of the fourth inning by virtue of the Ladycats’ second error of the contest.

“Defensively, we had some mistakes that we haven’t had all year,” Whatley said “That just deals with nerves, but at this stage, we’ve got to let that ride.”

Melton (22-5), who will play her collegiate softball at UT Tyler, allowed two earned runs on seven hits with five strikeouts and one walk in six innings of work.

Hornberger was the only Lady Eagle with multiple hits, delivering two singles and two RBIs.

Barbers Hill (41-2) advances to face either Georgetown or Aledo in the 5A final at 4 p.m. Saturday.

Hallsville finishes the season with a record of 32-7.

“These kids have given me everything that they could have,” Whatley said. “I asked for so much from them, and sometimes, I feel guilty for what I ask for and the dedication and the mindset that I ask of them. And they’ve gone above and beyond. It crushes me for them in this moment, but ultimately, I am so proud of them.”

In a game that announced a venue change late on Thursday night from the originally scheduled Red and Charline McCombs Field in Austin, that didn’t stop the Hallsville faithful from making the trip and supporting the Ladycats.

“It means everything,” Whatley said. “My entire coaching staff is Hallsville alumni, so we’ve been a part of it. We know the community of Hallsville is an amazing community, and they support each and every sport. And we’re just so proud of them for traveling this far with all of these extra changes. Most of all, they just want these girls to succeed. They love them and they have their back.”