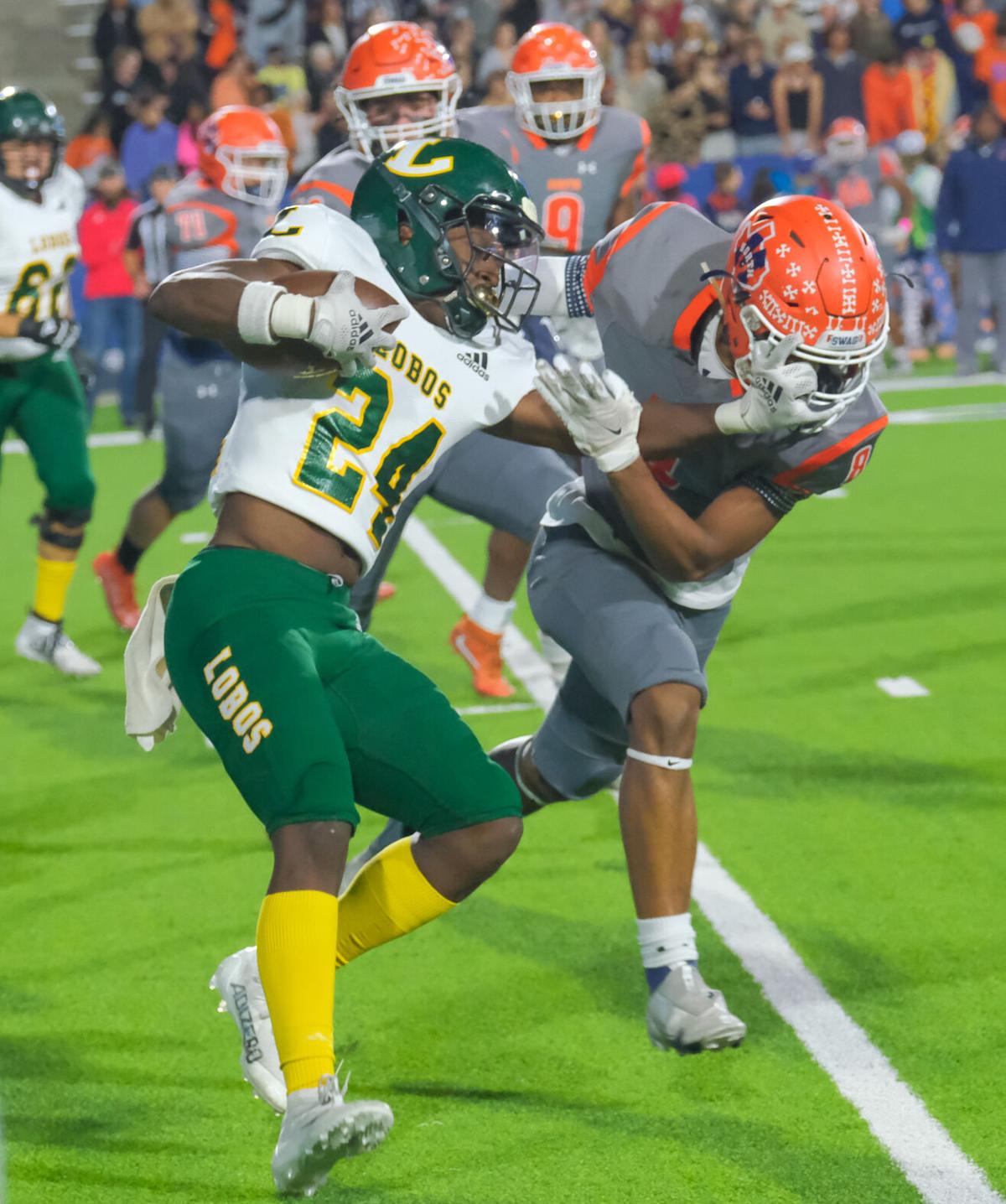 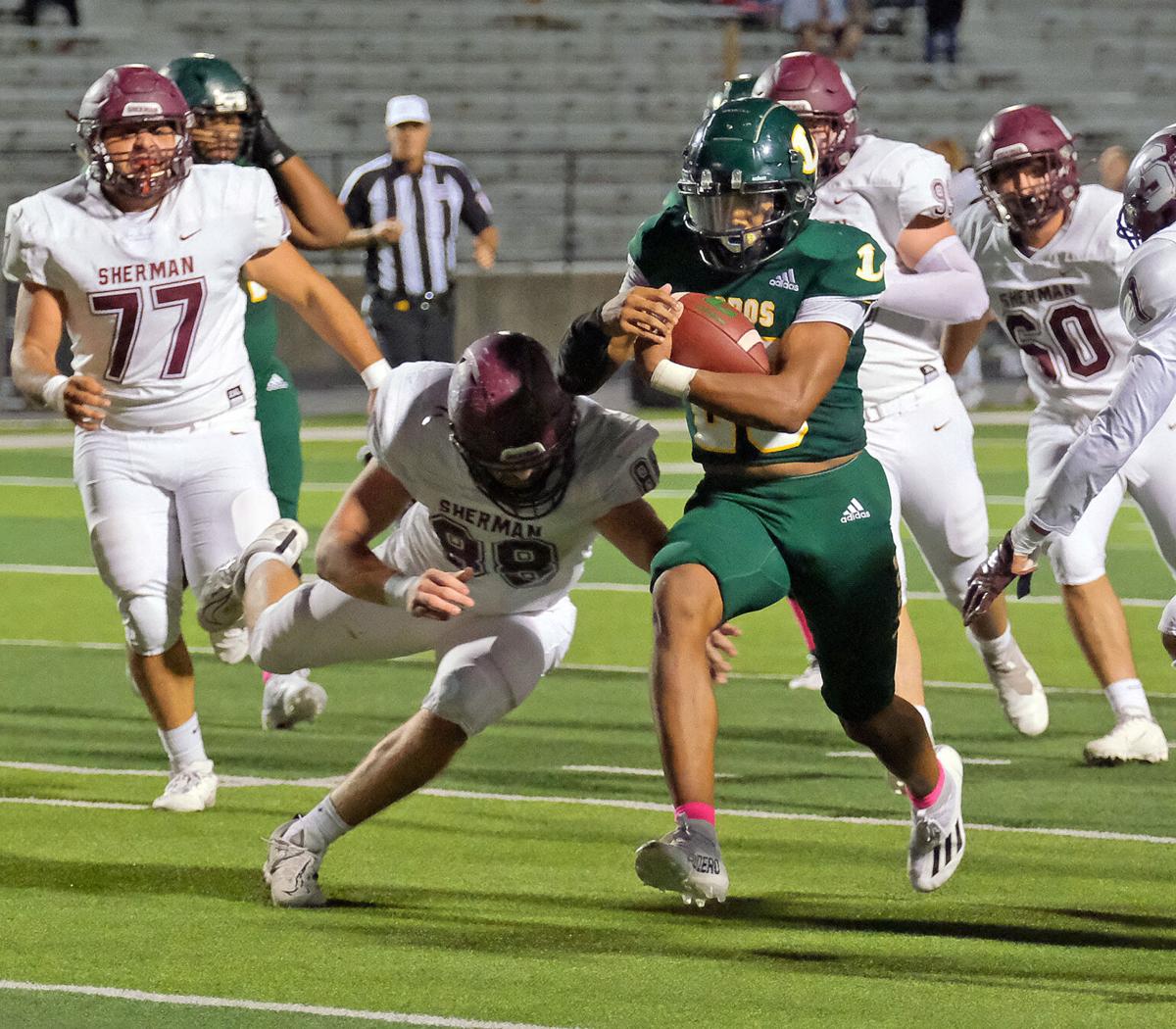 Longview’s Taylor Tatum charges toward the goal line on Oct. 15 against Sherman.

Longview’s Taylor Tatum charges toward the goal line on Oct. 15 against Sherman.

The Longview football team suffered two of its three regular season losses in the month of October, so it needed a late season boost before it entered this week’s Class 5A Division I playoff opener.

The Lobos got that in last Friday’s 49-0 rivalry win against Tyler, and also earned this Friday’s 7 p.m. bi-district playoff home game against Magnolia at Lobo Stadium.

“We did what we needed to do, and that was win to get a home playoff game,” Longview athletic director and head football coach John King said of his team’s regular season finale win. “That was the biggest thing. The kids prepared well and performed well, and we were able to finish the regular season on a high note.”

Longview reached this stage because there was important buy-in from the entire roster throughout the regular season.

“This is the ultimate team game,” said King. “You’ve got to play well on both sides and feed off one another.”

One of the groups that made noise last week and throughout the season was the Lobos’ defense. The unit recorded a non-district shutout against rival Marshall in week two, and earned a pair of district shutouts against Wylie East and Tyler in weeks six and 11.

“We’ve been playing pretty good defense,” said King. “Those guys have done a great job of giving us offensive field position, and creating defensive touchdowns. You name it. They’ve done a little bit of everything.”

“Defensively, we’re going to have to play well, and tackle well in space,” said King. “Their quarterback’s a good runner, and their sophomore running back is a very good runner. They throw a multitude of formations. Alignment, assignment and trust your eyes is going to be the ultimate test this week.”

The Lobos also expect a challenge from a Magnolia defense that only allowed 14.3 points to opponents during the regular season and made important plays to disrupt special team strategies, so their offensive and special team units have prepared for Friday’s pressure at practice this week.

“We’re going to have to earn it,” said King. “The kicking game, those guys pressure in a lot of ways. They’re going to come after every kick, whether it’s a punt, extra point or field goal. They’re going to put pressure on you to execute. I think they’ve blocked six kicks so far in the punt game this year, which is a concern.”

“And you add into the fact that defense is probably their strong suit. They’ve got a very difficult scheme. They’re going to blitz you and twist you, and send pressure from a lot of areas and a lot of different looks. It’s a tough scheme to prepare for.”

Luckily for Longview, it has plenty of playmakers on the offensive side of the ball. That starts with Jordan Allen and Joshua Thomas, who both demonstrated dual-threat abilities and regular success at the quarterback position during the regular season.

“I’m pleased with the quality of depth that we have at the quarterback position,” said King. “Both of them are good players, both bring a different skill set, and both can help lead this team to victory.”

And you can’t forget about the Lobos’ running attack that has already recorded 100-yard individual performances on the ground this season, as well as multiple players in the backfield teaming up for hundreds of rushing yards in a game.

“All those guys bring a different skill set,” King said of his team’s rushing crew. “They give you a little added dimension that the other one may not. We ran a little more quarterback run last week than we have in a while. Taylor Tatum and Jarrett Lewis are good running backs that can run the ball with physicality between the tackles, and can also get on the edge with it. Both our fullbacks are blocking well, running the ball well, and getting tough yardage when we’ve needed it. Our backfield has been pretty solid for most of the year.”