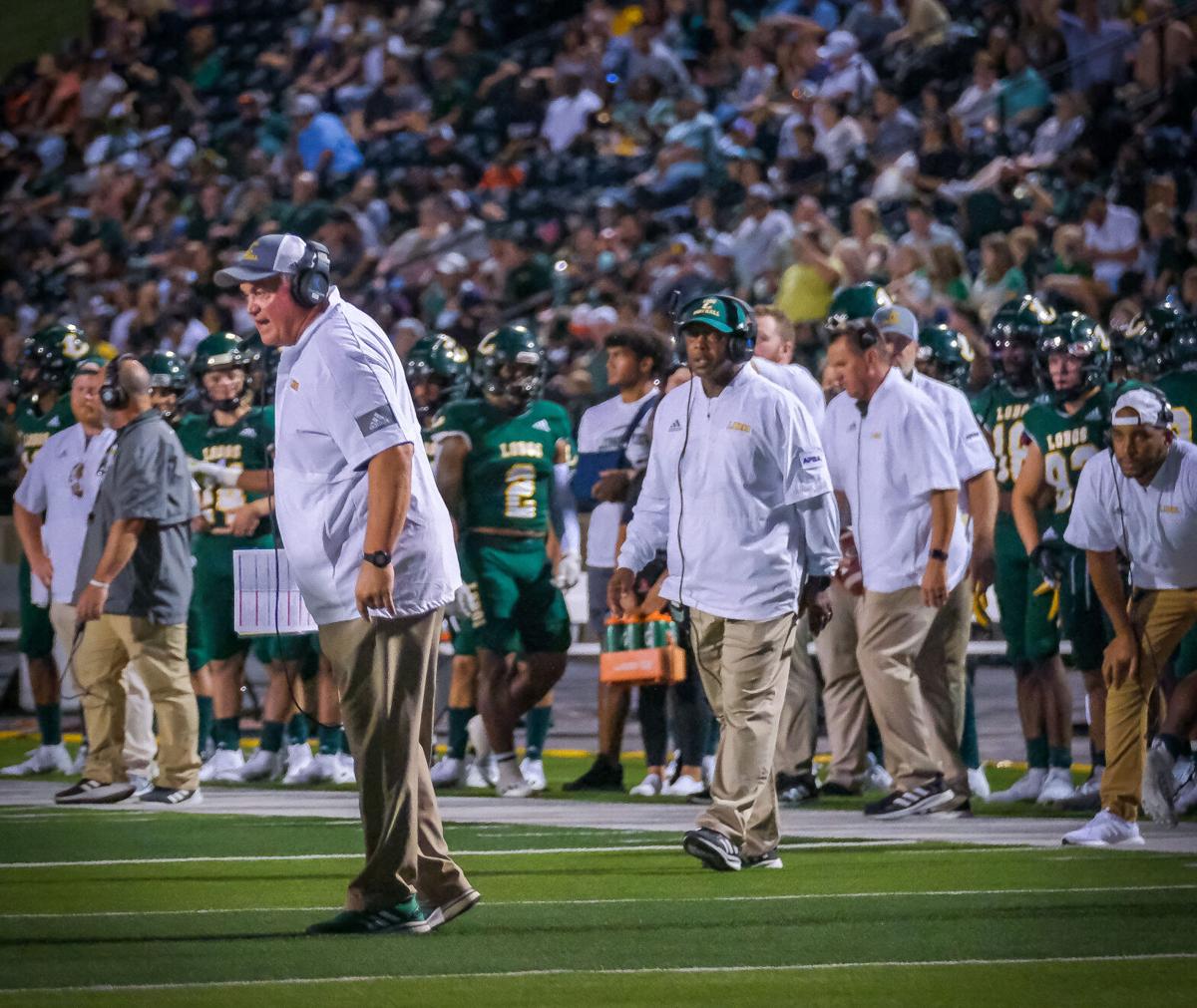 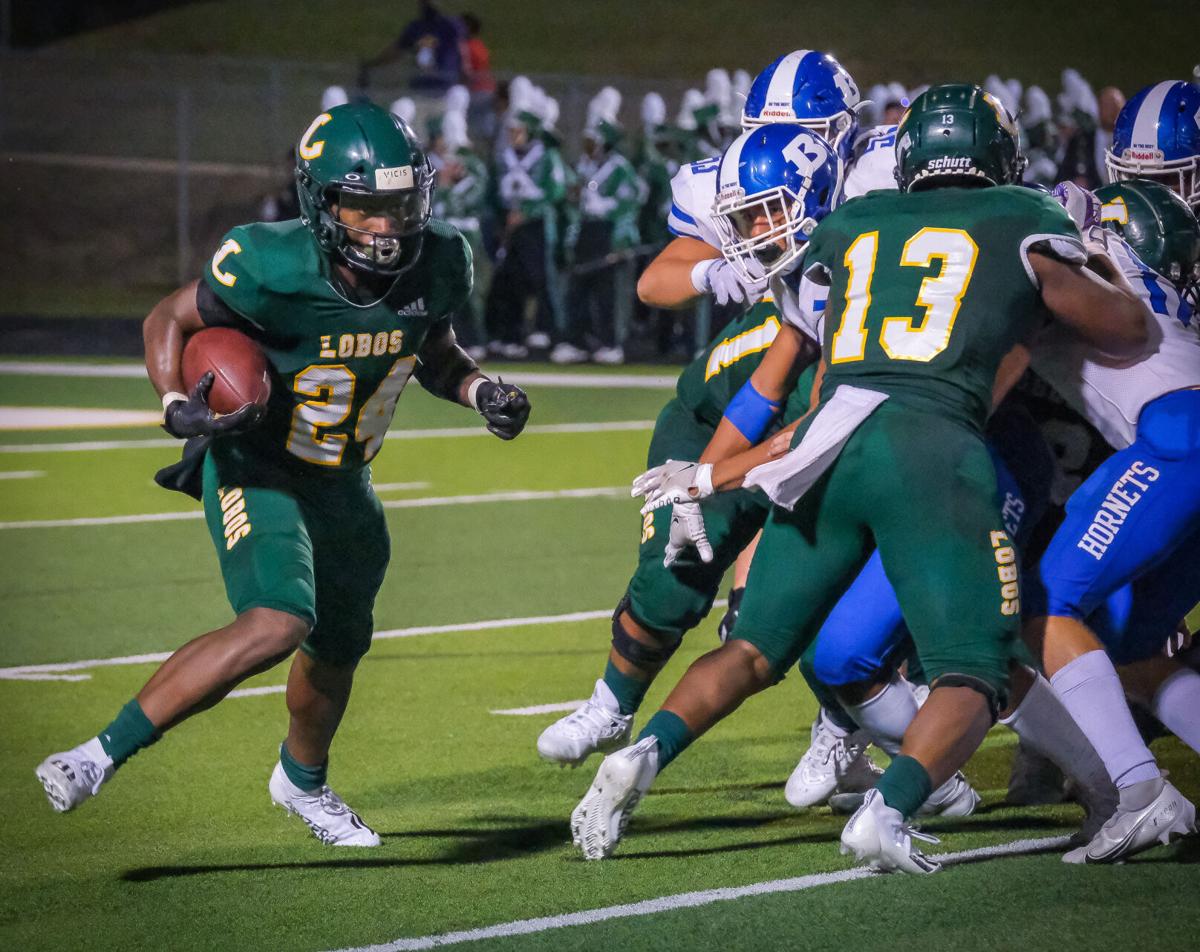 Longview’s football program is off to another strong start and is currently in the process of making the 2021 season transition from non-district competition to UIL 7-5A Division I district play.

The Lobos are fully focused on continuing their season success in their six-game district slate. That part of the schedule begins at 7 p.m. on Thursday night against West Mesquite at Mesquite Memorial Stadium.

“Basing everything on what you see and how results are of games, I think it’s probably going to be a wide-open race for playoff spots and the district championship,” said Longview athletic director and head football coach John King. “I don’t know if there is a dominant team in our district. Everybody was hit hard with graduation, and there’s a lot of youth and inexperience.”

“The quality of opponents that you play in non-district should prepare you for the district race, and I think ours have,” said King. “I feel like the quality of people we’ve played and the talent level that we’ve had to play against has been pretty good. We know a lot more about our football team than we did a month ago.”

Longview found non-district success by planning for one opponent at a time, and will continue to follow the same plan for its district slate. This week, the Lobos’ only focus is West Mesquite. The Wranglers enter district play with a 2-2 season record after earning early season wins against Waco and Chisholm Trail, and suffering losses against Mesquite Poteet and Fort Worth Timber Creek.

“West Mesquite has terrific skill people,” said King. “They always have. That’s a mainstay there with their football teams. They’ve got a quarterback that’s electric, they can throw it and run it, they get the ball out in space, and they’ve gotten a lot better in the line scrimmage on both sides of the ball. That comes from being in year two under Coach [Frank] Sandoval. They’re more adjusted to the scheme of things. You’ve got to limit the number of big plays that they make.”

The next challenge will be a 7:30 p.m. home game against Wylie East on Oct 1. The Raiders currently have a 2-1 season record after non-district wins against Mount Pleasant and Irving Nimitz, and an eight-point loss to Royse City.

Longview will then head to the highly anticipated Oct. 8 matchup of state powers at Highland Park’s Highlander Stadium. The game is scheduled for 7:30 p.m. and could play a big role in deciding the 2021 7-5A Division I district championship. The Scots have followed a similar path to the Lobos this season, and also currently hold a 3-1 season record.

They lost to a state power in Southlake Carroll in the season opener before bouncing back with three straight wins against Flower Mound, Coppell and Rockwall.

Following that will be a rare Longview matchup with Sherman on Oct. 15. The 7:30 p.m. battle at Lobo Stadium will launch the first football meeting between the Lobos and Bearcats since Sherman beat Longview 10-3 at Irving’s Texas Stadium on November 19, 1976. The 2021 Bearcats lost their season opener against longtime rival Denison, won back-to-back games against Mount Pleasant and Saginaw, and suffered a shutout loss against McKinney in the year’s final non-district game.

Longview will then refocus during their bye week before traveling to the 7 p.m. Thursday meeting with McKinney North at McKinney ISD Stadium on Oct. 28. The Bulldogs are currently 1-3 after beating season-opening opponent Oklahoma City (Oklahoma) Westmoore and losing the next three games against in-state Texas foes Justin Northwest, Marshall and Rockwall-Heath.

The 7-5A Division I district schedule wraps up with the 98th edition of the Longview/Tyler football rivalry. The latest meeting will kick off from Lobo Stadium on Nov. 5 at 7:30 p.m. The Lions are currently 2-2 after losing their first two games against Texarkana Texas High and Tyler Legacy, and bouncing back with wins against Nacogdoches and Mesquite Horn.

This year’s 7-5A Division I district mates are familiar with each other, so that will help in their district preparation. To add to this, there have been some common opponents on the teams’ non-district resumes.

Longview beat Marshall 14-0 in week two and McKinney North lost to the Mavericks 41-29 in week three. The Lobos also beat Tyler Legacy 46-20 in week three after Tyler fell to the Red Raiders 62-55 in week two. The same goes for Wylie East and Sherman, who beat Mount Pleasant 19-14 and 36-35 in week one and week two respectively.

For now, Longview is focused on this week’s test against West Mesquite, and starting district play on the right note.

“We better worry about this week,” said King. “This is district play. This is week one. You want to end up 1-0 after the start of the district, and be in the driver’s seat for a playoff spot and a district championship. Control your own destiny and it’s week to week.”