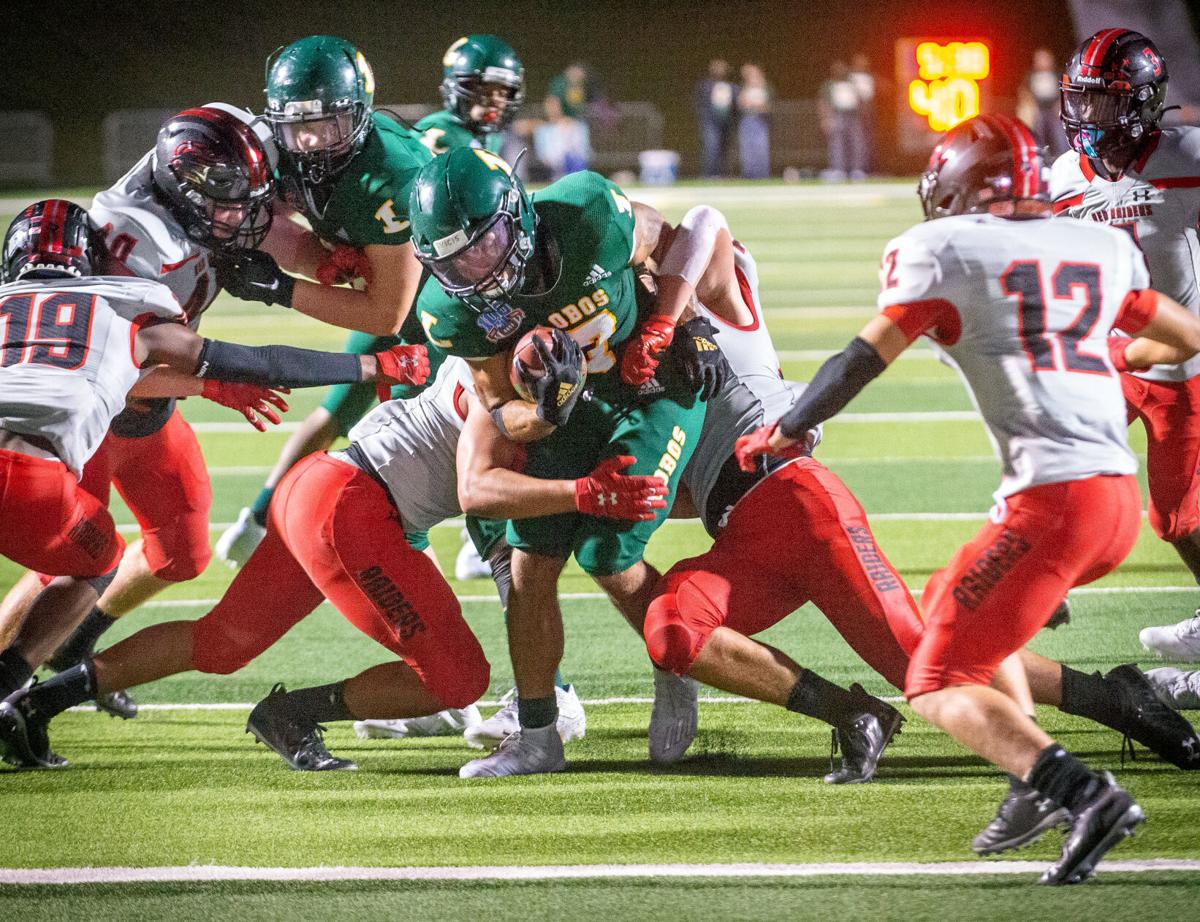 Longview’s Kaden Meredith tries to fight his way into the end zone during Friday’s game against Tyler Legacy at Lobo Stadium. 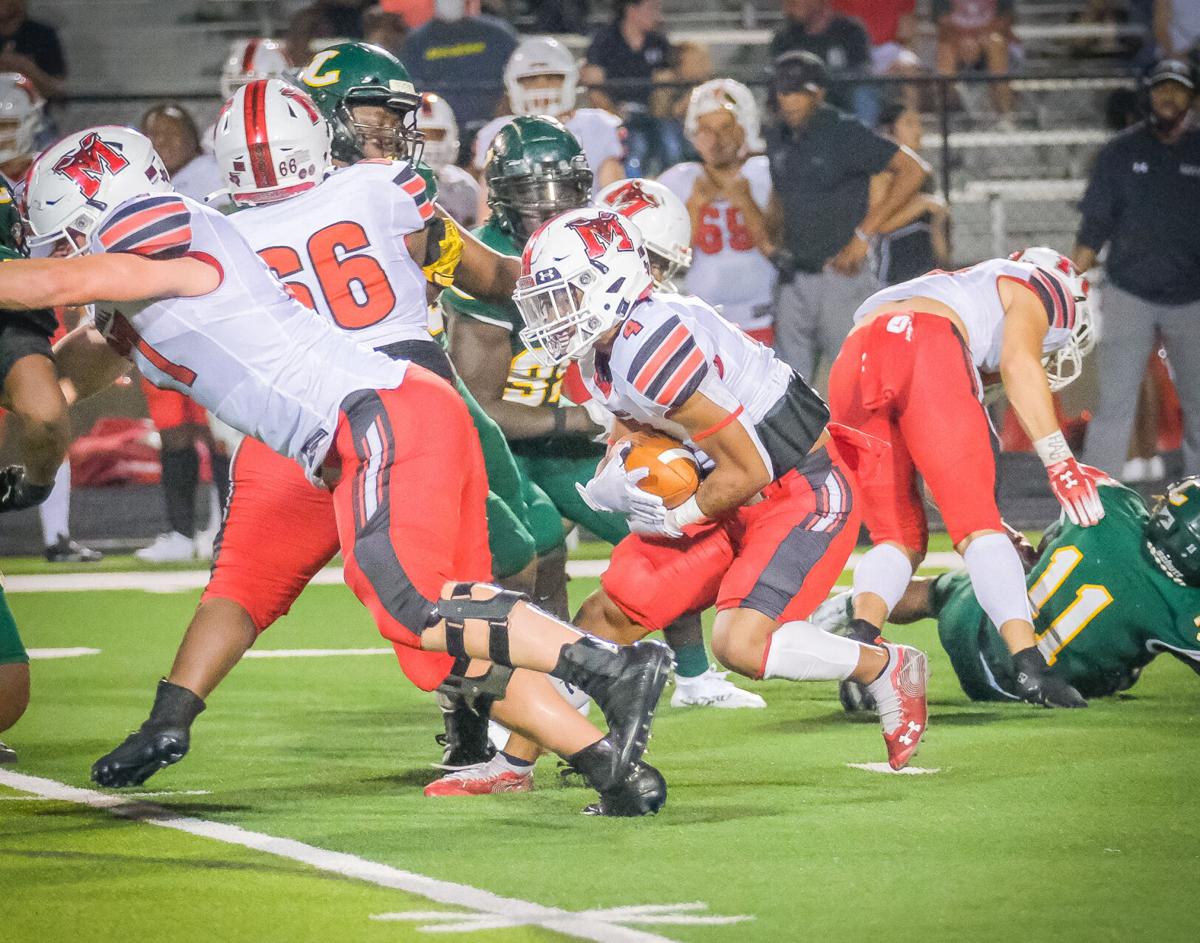 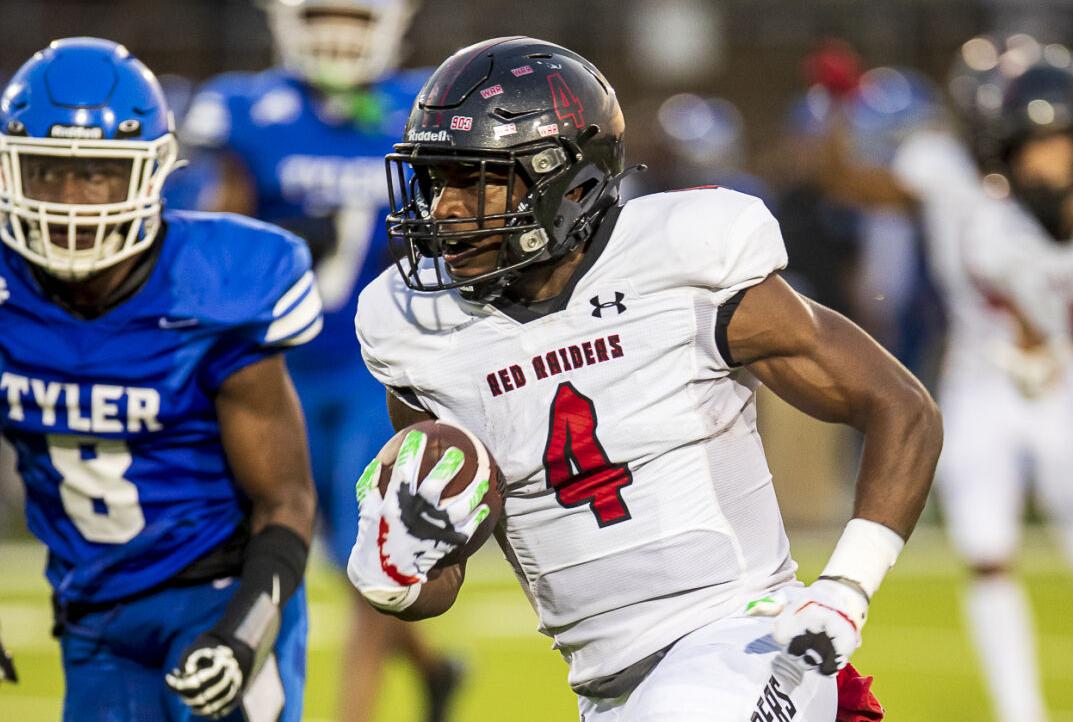 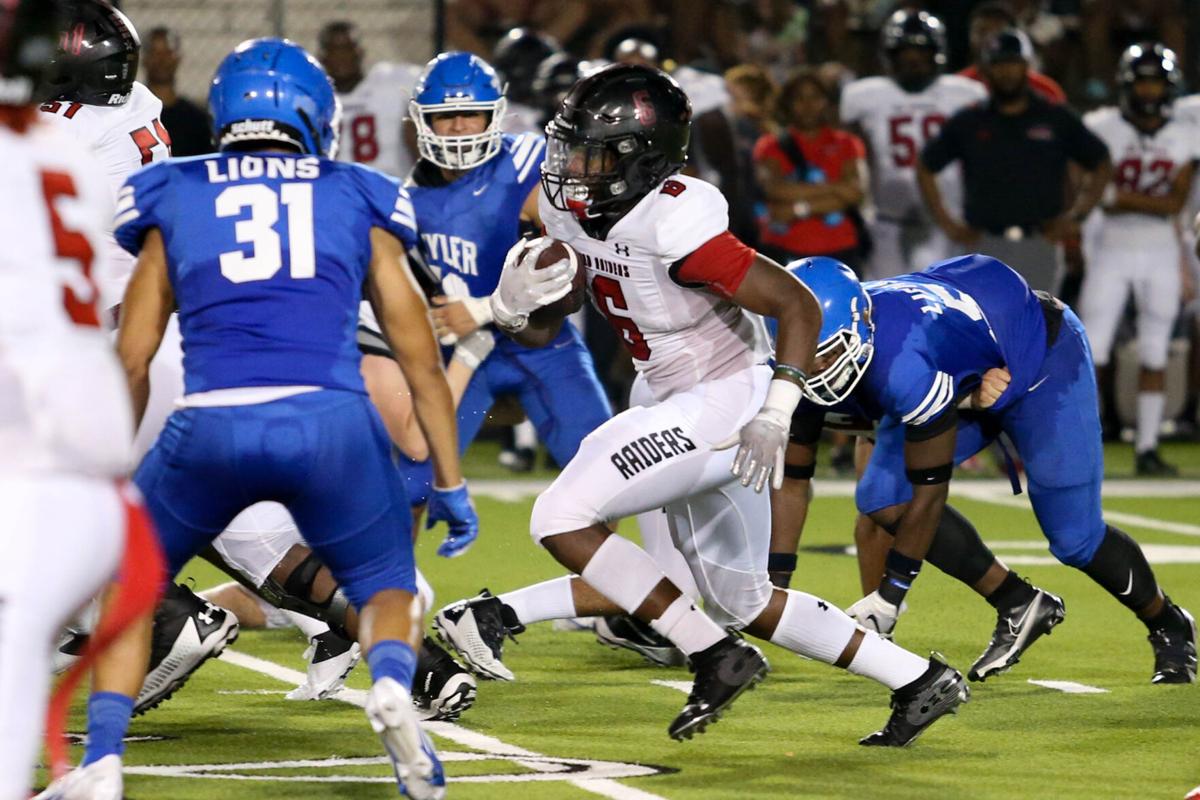 The Longview High School football team bounced back from its season-opening loss against Denton Ryan by shutting out longtime rival Marshall 14-0 this past Friday.

The Lobos improved from week one to week two, but they also know that they have to continue to improve to beat more teams down that road.

“We did have some issues with people being misaligned or not in the right gap, but we were able to overcome that,” said Longview athletic director and head football coach John King. “We’ve got to do a better job with not giving up big plays on third and long. Other than that, defensively, I thought we were outstanding. And offensively, it’s a matter of a block here and a block there. You’ve got to have everybody in sync in that unit. Up front especially.”

The defensive unit highlighted Longview’s performance on Friday because it produced a shutout, and only allowed 179 yards to Marshall’s offense. It expects to play a big role again because the Lobos will face an explosive Tyler Legacy offense at Christus Trinity Mother Frances Rose Stadium starting at 7 p.m. on Friday.

The Red Raiders have already recorded 97 points between their first and second game this season.

“It’s going to be totally different than what we played last week,” said King. “Two-headed monster with those running backs [Jamarion Miller and Bryson Donnell]. They’re going to be a different scheme to prepare for. They’re going to mix in some triple option stuff out of the pistol. You’ve got to play assignment football.”

“Two Division I running backs, not too often that you have to defend that,” he added.

“They’re as good as advertised. They’re unselfish [and] they’ll block for one another. They’re going to use them in a variety of ways.”

King expects Tyler Legacy to present a different rushing challenge than most teams on Longview’s 2021 schedule, but the Lobos can adjust on the fly and will be well-prepared after their defense allowed 54 yards on the ground to Marshall last week.

“Legacy is going to present different problems for us on both sides of the ball,” he said. “They don’t throw it like some other teams that we’ve seen or will see down the line. Marshall threw it some, but they had a power run set in there. It’s just different. It’s going to be a different game plan again this week for us. That helps you moving forward from a defensive standpoint.”

Longview’s offense had a slow start to the season, but started to turn the tide with its week two performance. Some of that success can be credited to the use of multiple players at different offensive positions.

“We’re going to play as many kids as we can,” said King. “Those that deserve to play and prove that they’re ready to play. You’ve got to keep your skill kids fresh.”

While the offense finds its footing in 2021 and the defense continues to excel, Longview can stay on track with its up-and-coming punt team. That group’s seven punts for 244 yards kept Marshall in check throughout last week’s game.

“Our punt team is going to be extremely important if we don’t play better offensively,” said King. “That’s way too many punts to start with. But, fortunately for us, we were able to get good snaps and good punts off, good coverage, and flip the field for the defense. Michael [Fields] came in and did a good job. Josh Harrison in his first time snapping, all seven of his snaps were good. If that’s what it’s going to take, then that’s what we’re going to do. But, we’re going to try to cut that punting down if we can.”