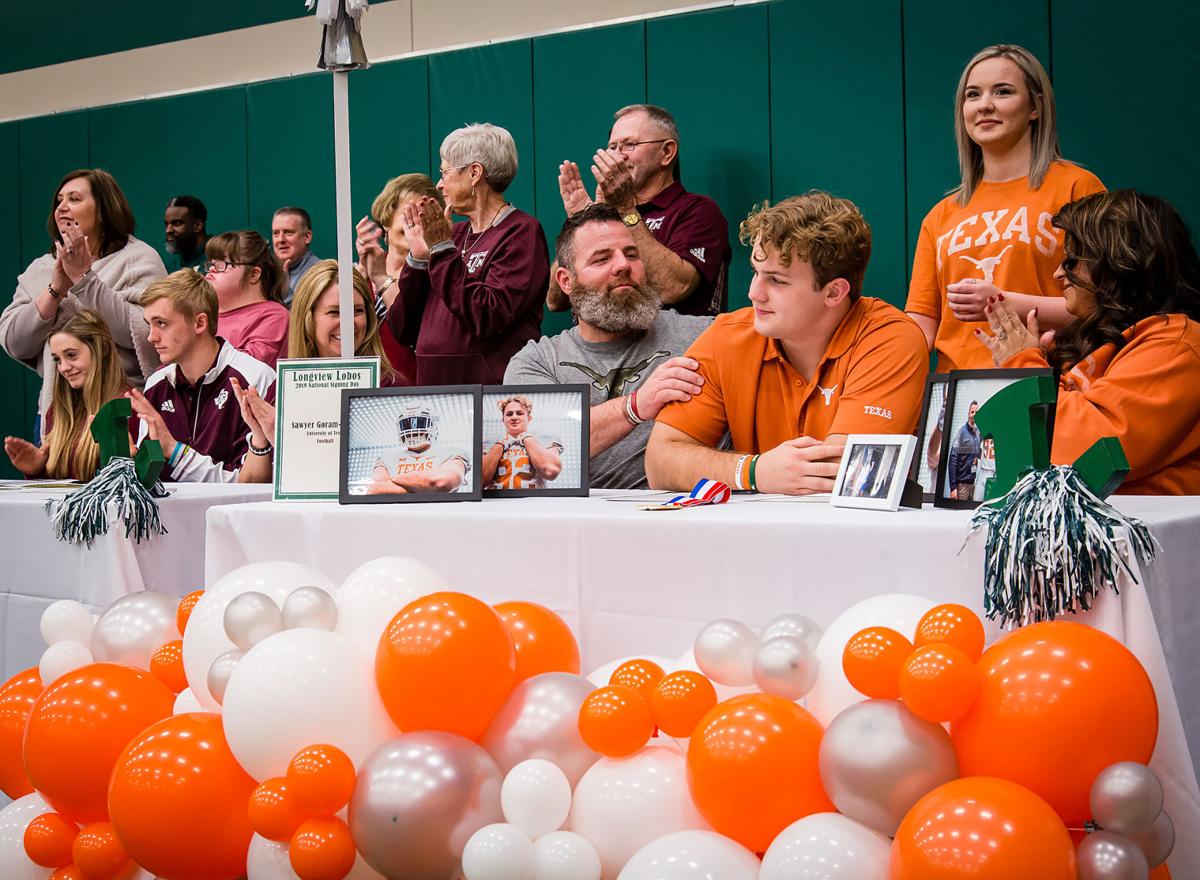 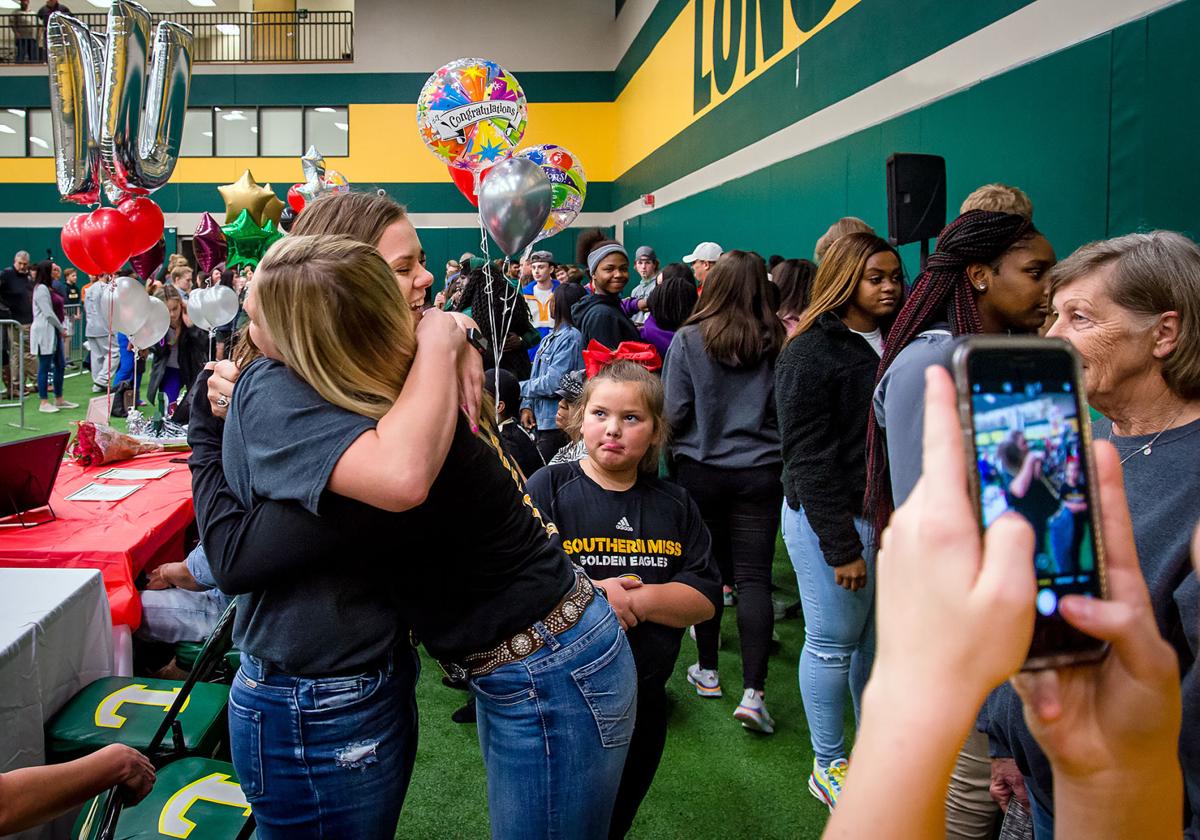 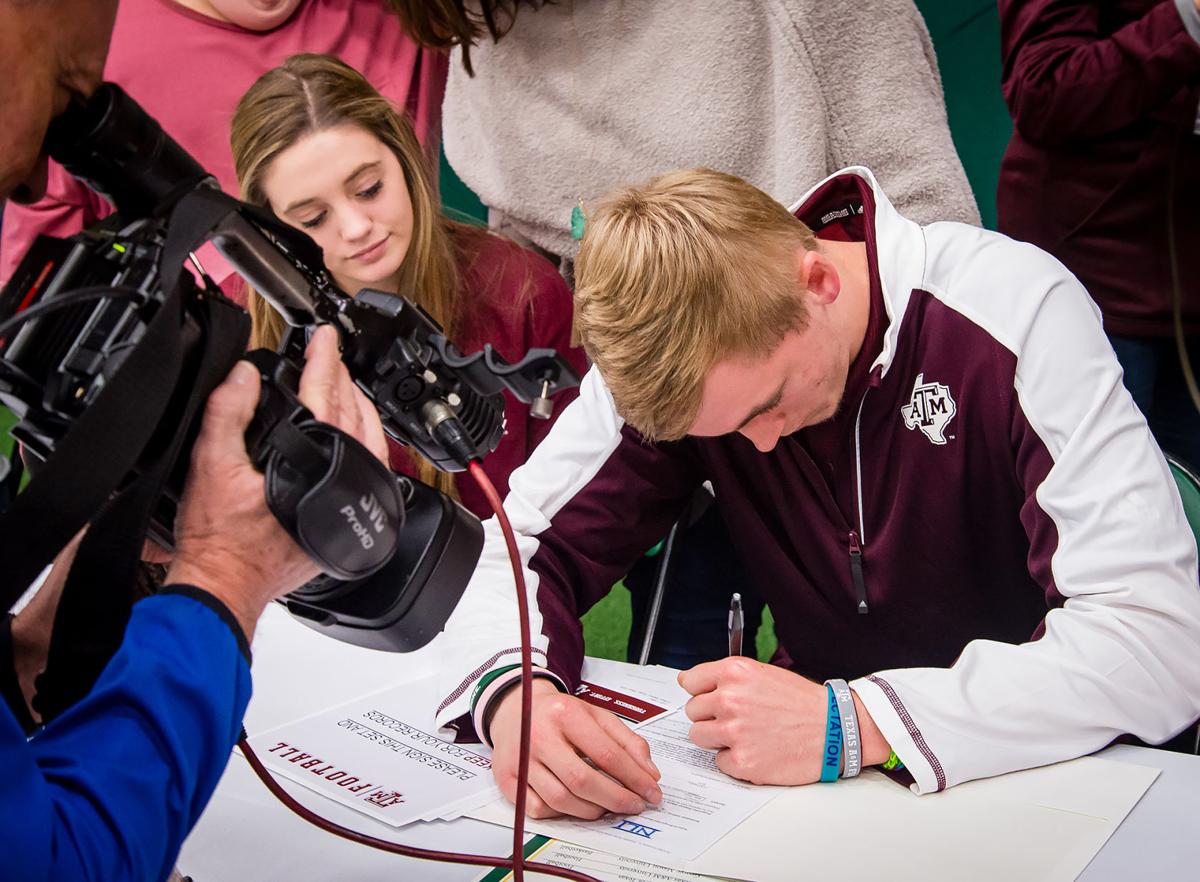 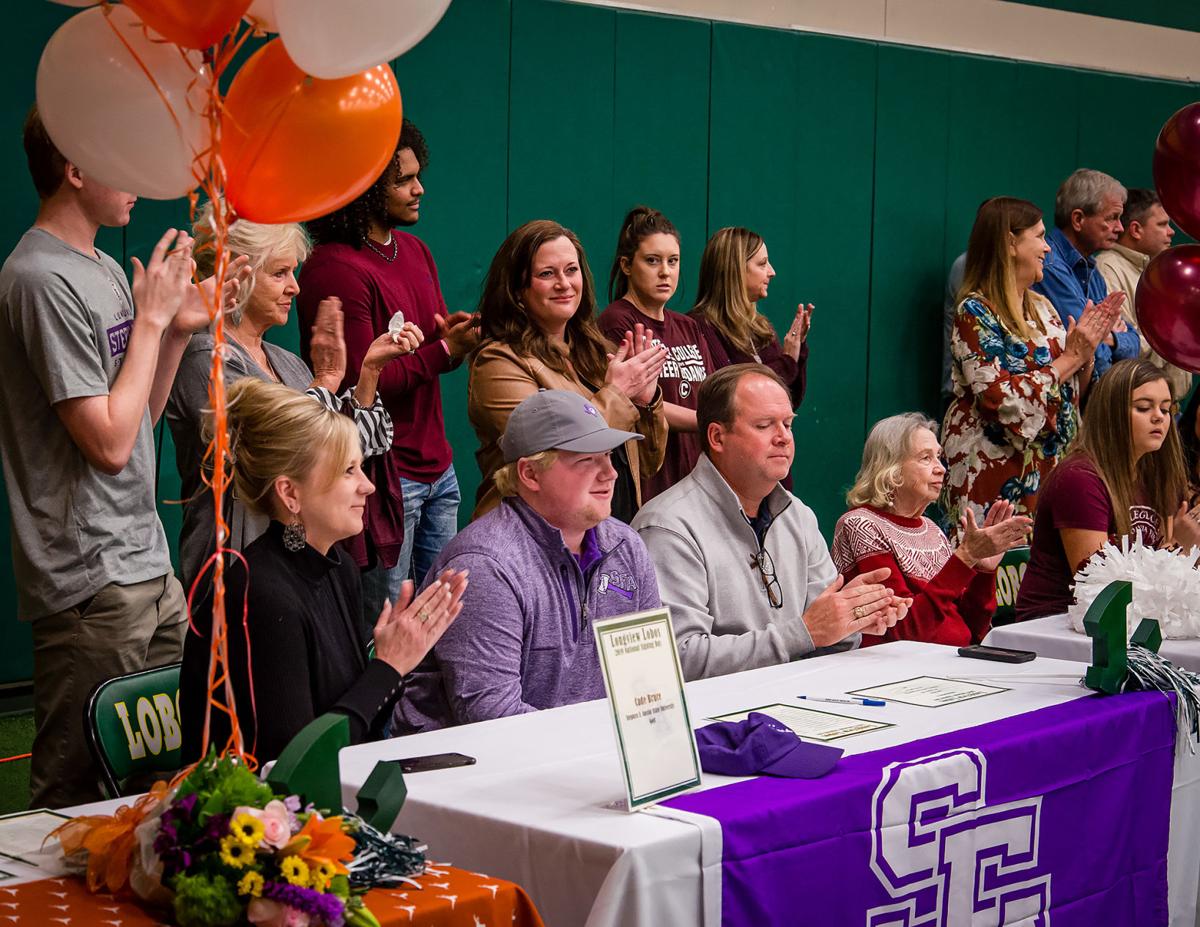 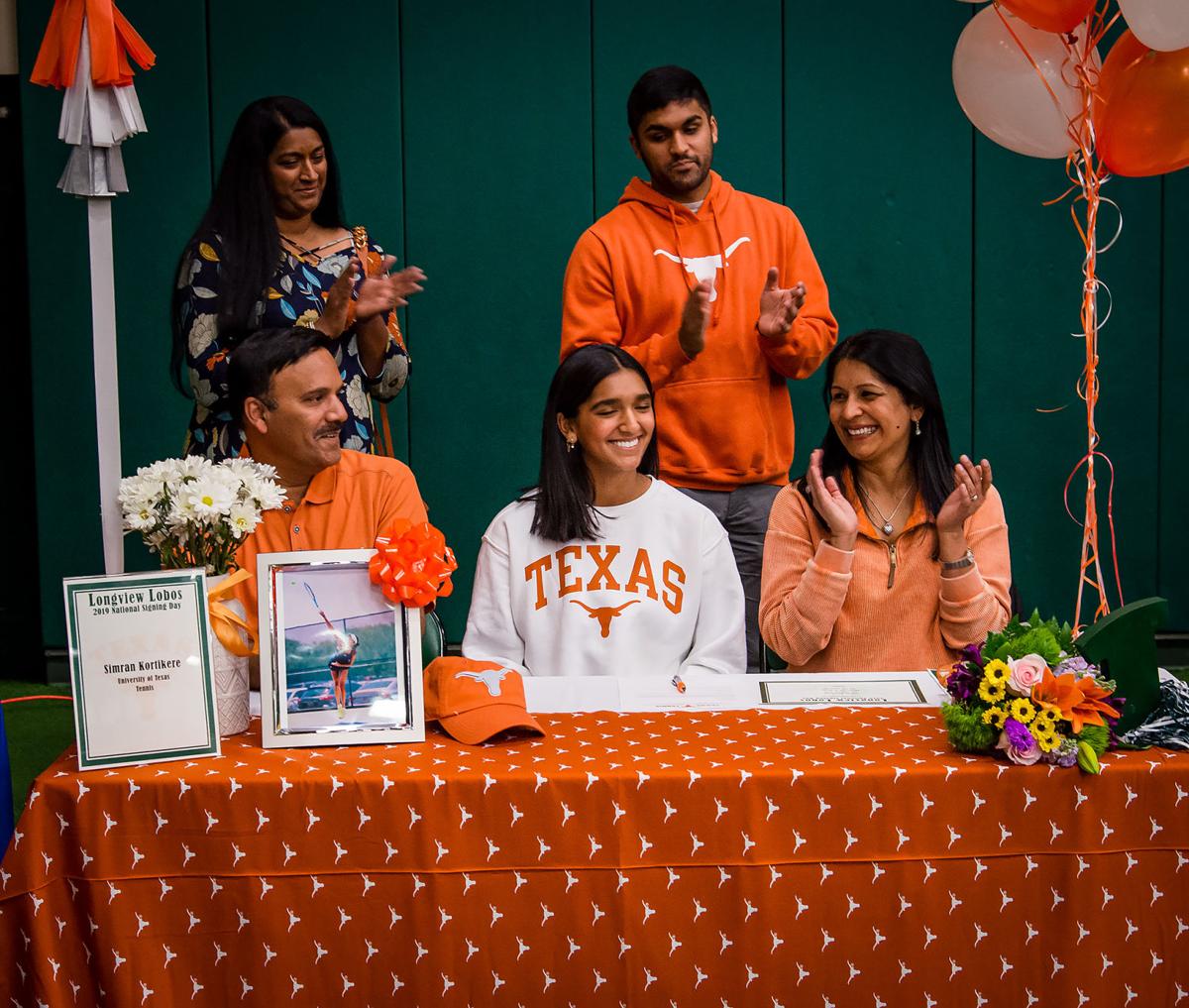 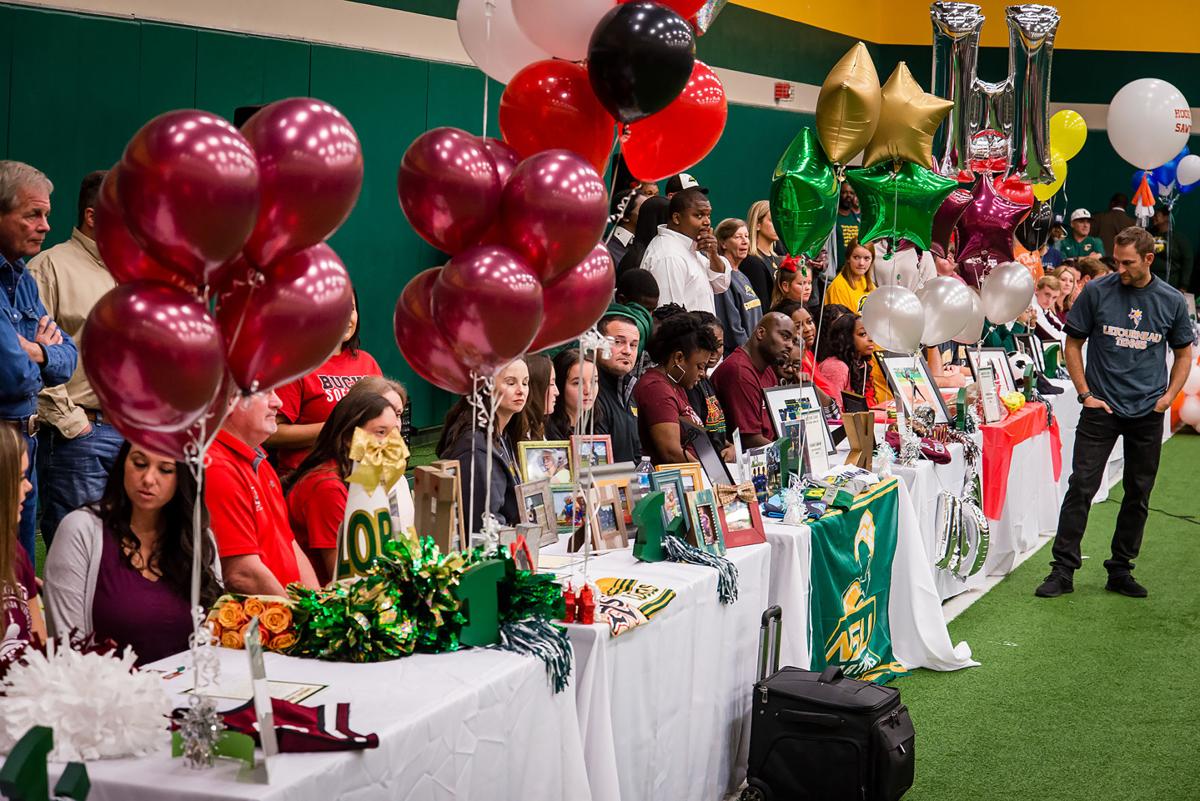 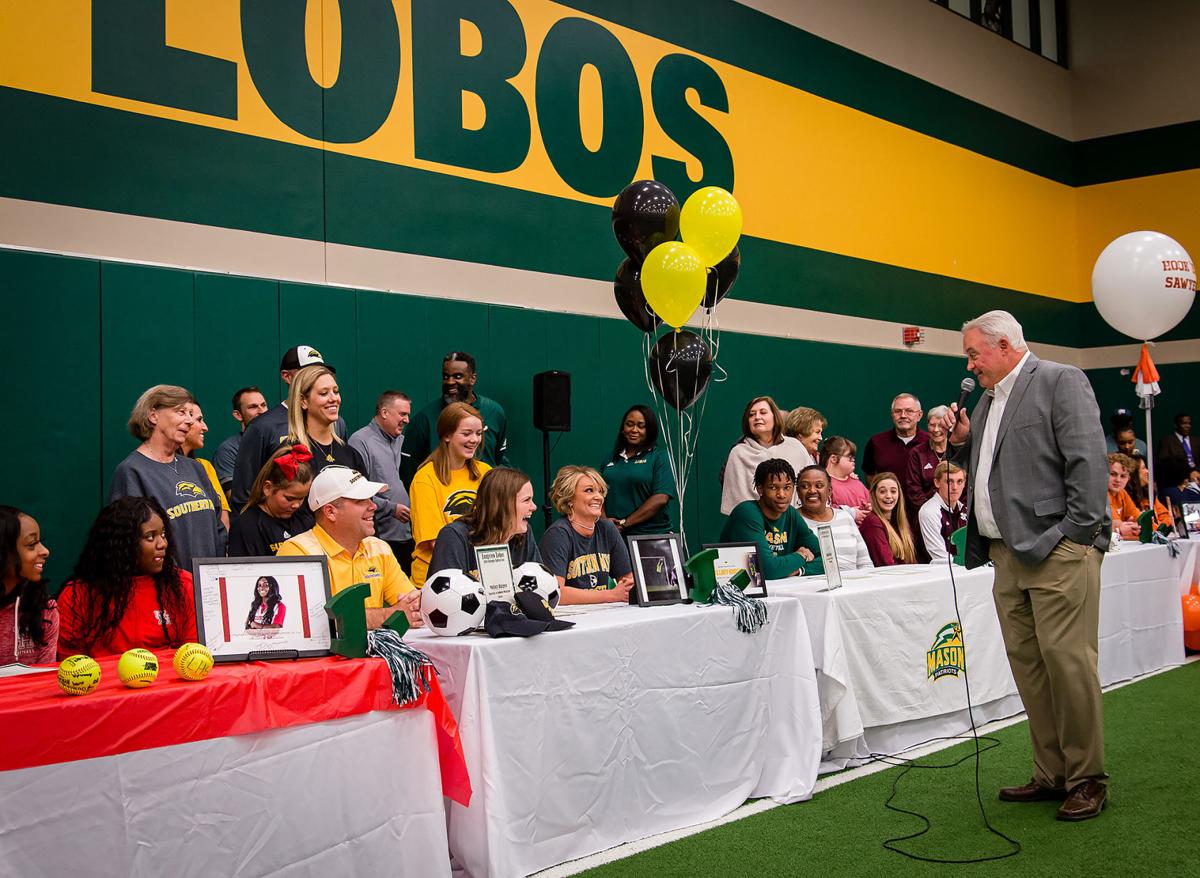 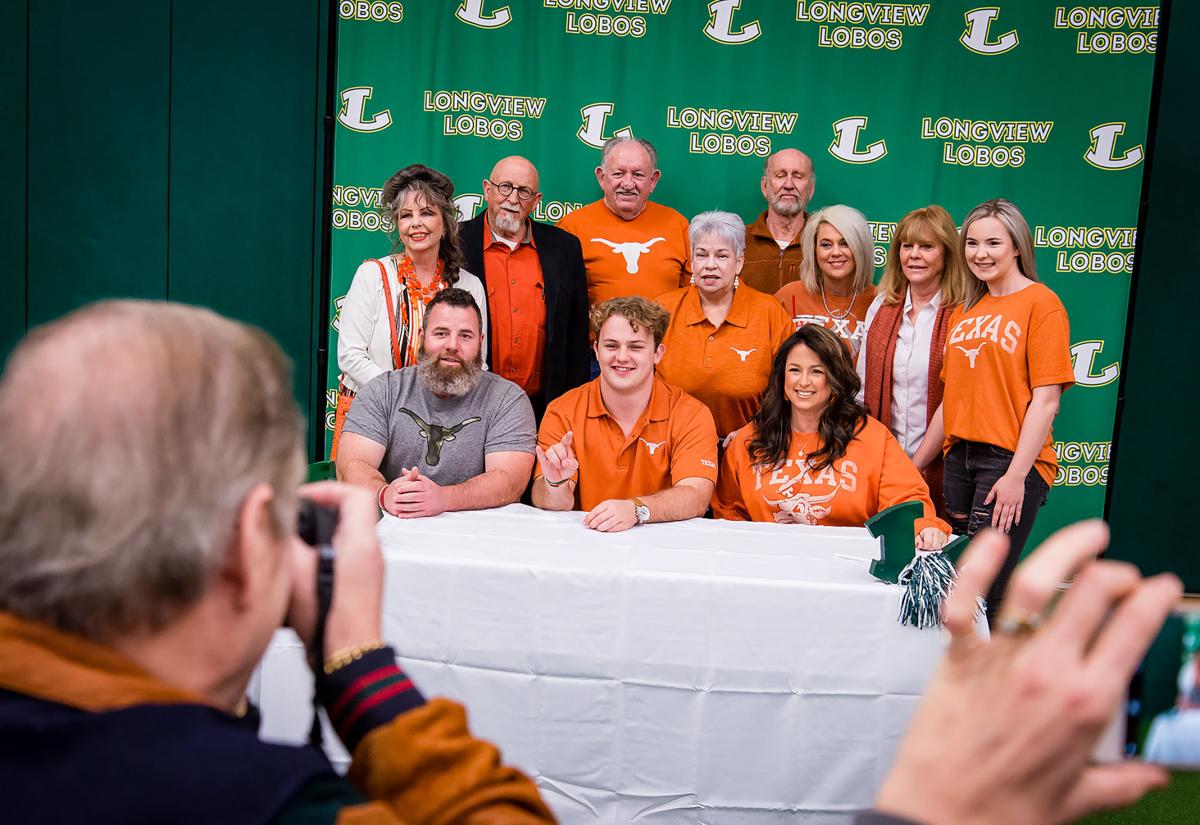 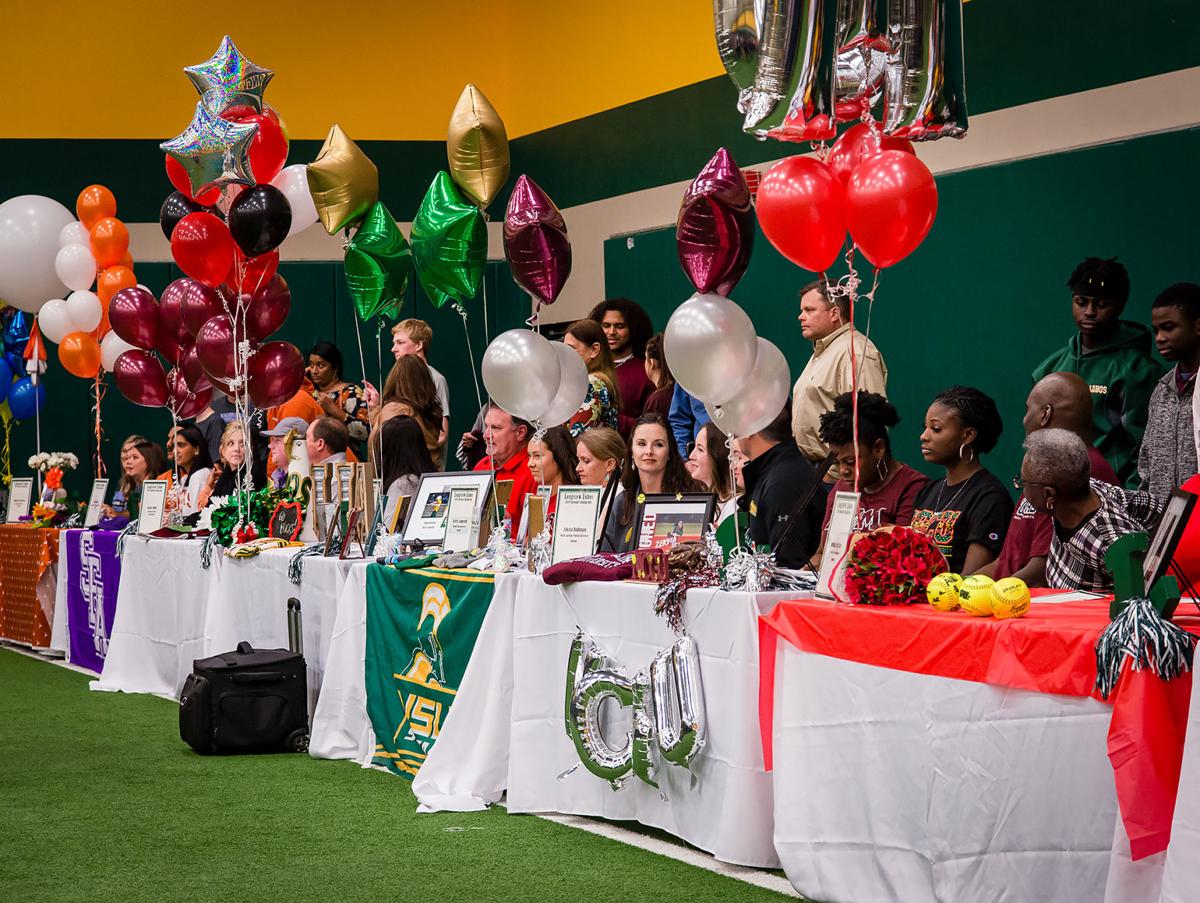 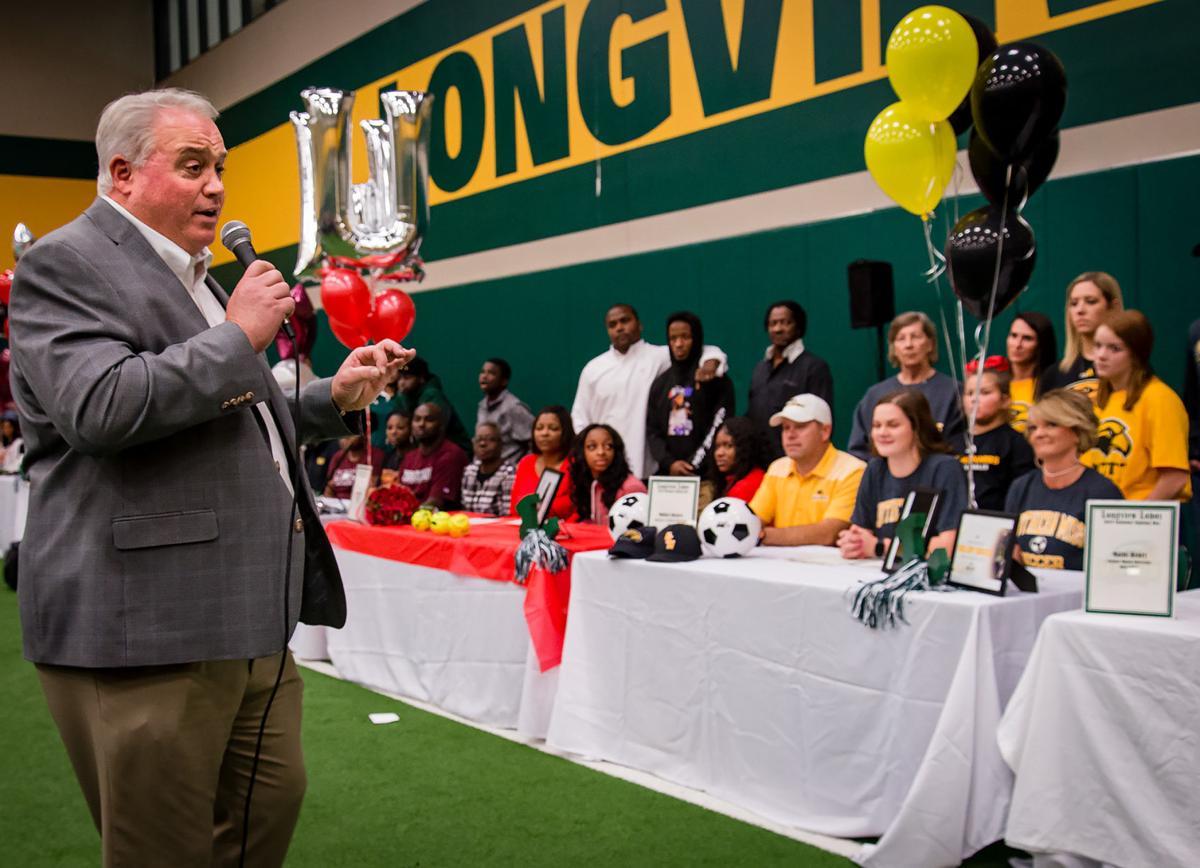 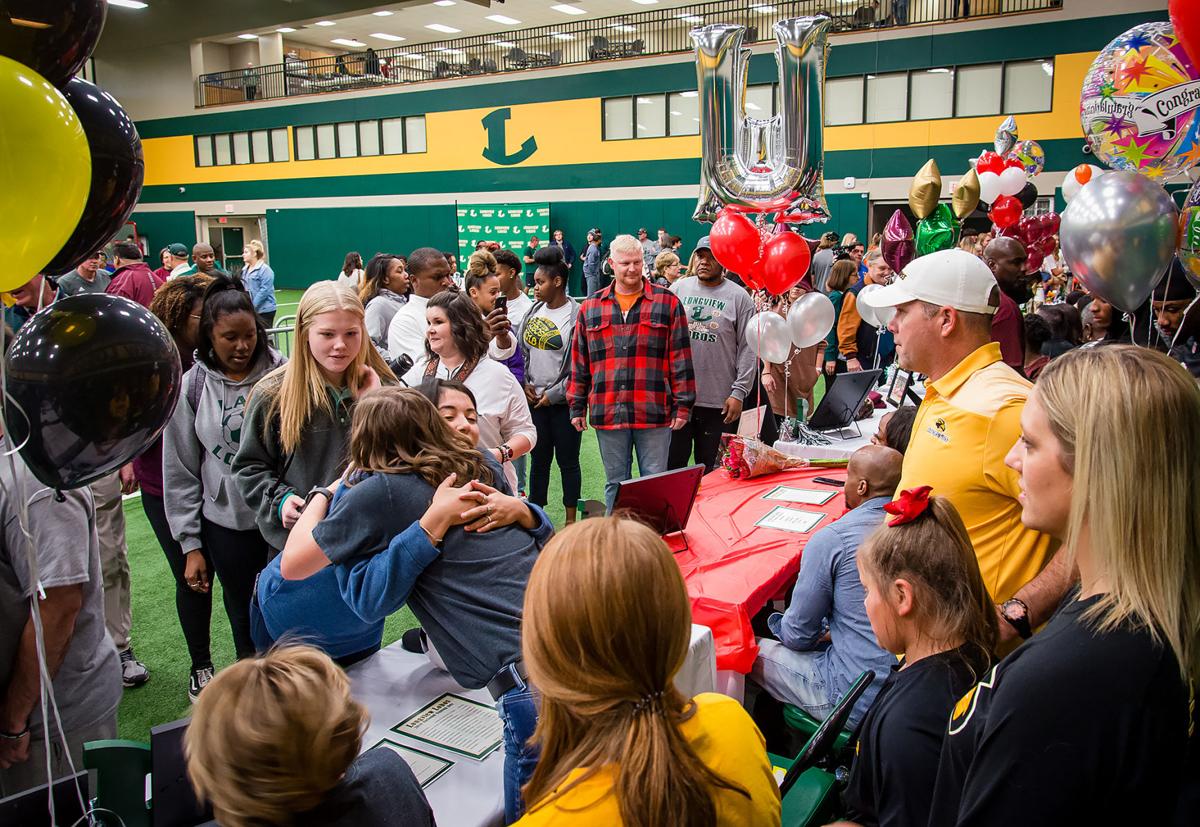 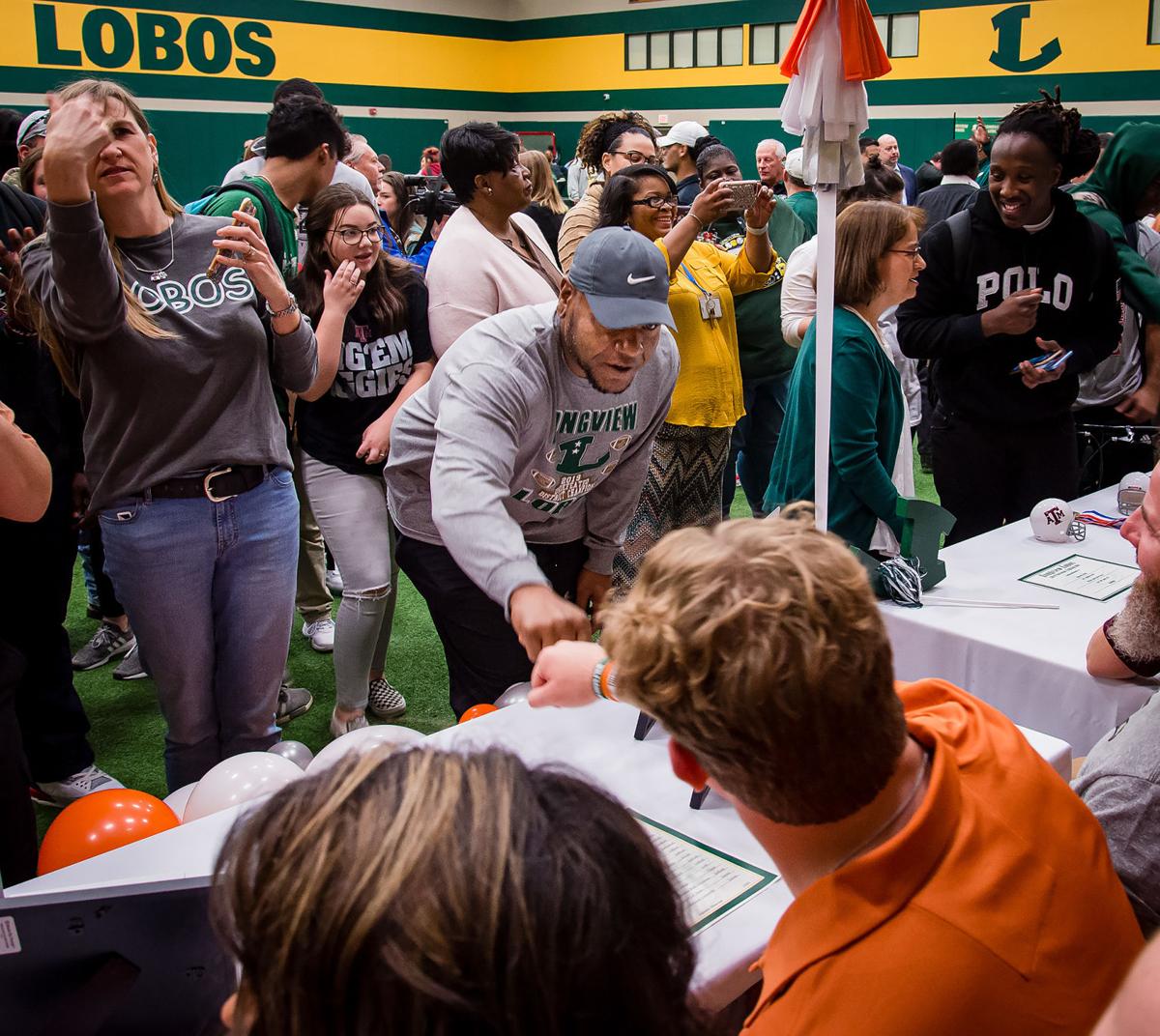 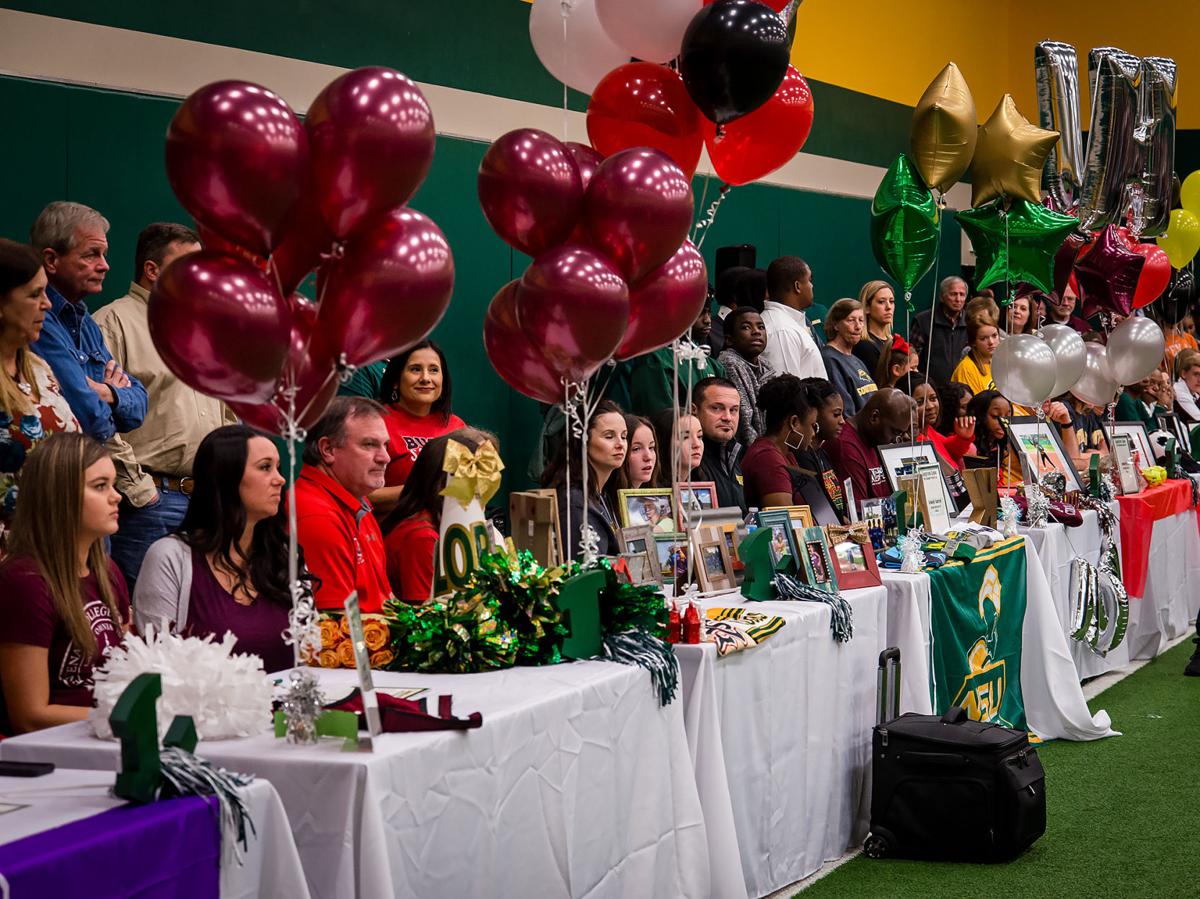 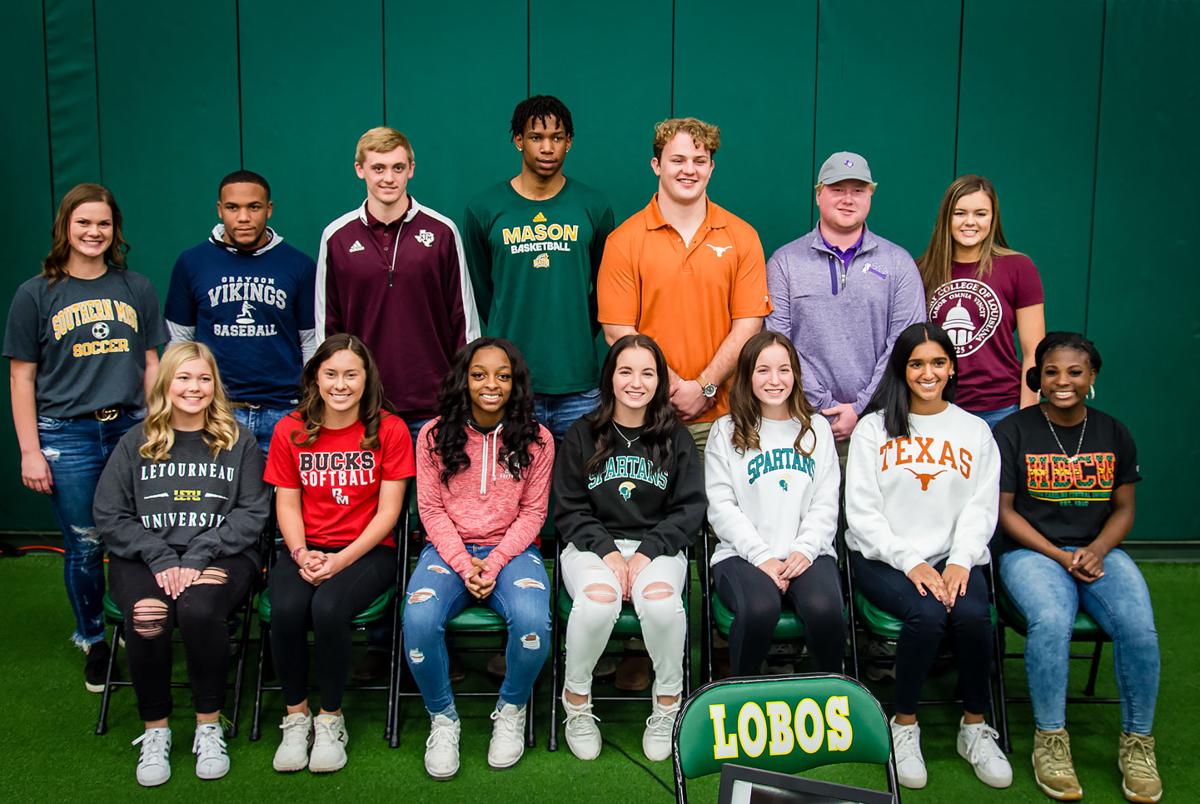 Longview High School’s Turf Room was lined wall-to-wall with student-athletes, coaches, teammates, family and friends and everyone involved had a major part in the festivities whether they were signing a piece of paper or not.

In a celebration that featured, smiles, hugs, tears and tons of photos, fourteen Lobo and Lady Lobo student-athletes, representing eight different sports, all signed to continue their respective careers at the next level on National Signing Day on Wednesday.

“This is a group that I’ve watch grow up from middle school or before all the way up,” Longview athletic director John King said. “It’s a talented group of student-athletes that has put in the work in their respective sports and in the classroom to reach today.

“Each and every one of them has had such a strong support staff along the way, from their families to their coaches and teammates. It’s a special day for everyone involved.”

“It shows the amount of talent that we have on this team and how hard we’ve all worked to reach this day,” Kerris Cameron said. “It’s an exciting day.”

Exciting days are ahead for the Lady Lobos, who will return a strong group to the field this spring.

“We have nine seniors that have been together for a while and a new player coming in,” Kennedy said. “It feels good after putting in all of the hard work that we’ve achieved our goal of playing college softball.

Malik Henry, who has helped guide the Lobo basketball team to a 13-4 start to this season, signed earlier this fall with George Mason University.

“I committed last year around Christmas and it means a lot knowing that all of the hard work I’ve been doing has really paid off,” Burgess said. “The atmosphere is great and I knew immediately that I belonged there.

“I always knew this group was going to be special with all of the accomplishments that we have.”

Hard work best describes Kayla Smith, who will cheer at Centenary College and Julia Miller, who will continue her tennis career at LeTourneau University.

The Longview-to-Austin move is strong in this class with Sawyer Goram-Welch signing with the Longhorn football team and Simran Kortikere, a longtime Lady Lobo standout and the first tennis player to sign with a Division I program since 1989, heading to the University of Texas.

“I’m extremely excited,” Kortikere said. “It’s been a long process and I’ve been going on visits around the United States. I ended up at Texas and it was just a perfect fit. It’s Texas, close to home and the support staff, the team and the facilities are second to none.”

At the end of Wednesday’s ceremony, John King shifted his role from athletic director to father as he addressed his son, Haynes, who signed to continue his football career at Texas A&M University.

“In 2004, my first year as a head coach at a signing ceremony, it was emotional and I didn’t know what I was going to do or what I was going to say,” King said. “I knew that it was such a special time for the student-athletes and their families. I just hoped one day I thought would have the chance to go through that same experience with my son.

Haynes King talked about a new chapter for him and everyone in the room on Wednesday. He also spoke about how fast it went after committing to the Aggies this past summer.

“At first, I knew it would be a little while before this day came and I was focused on the football season,” Haynes said. “Right now, I’m just anxious for the next step. Since the season ended, it’s really set in that it’s time to move one and it’s about to happen fast, quicker than you think.”

John King added that everyone had a hand in Wednesday.

“It’s not easy being a head coaches son and it’s sure not easy in Longview, Texas,” King said. “To say that you came up through the program — and it takes a village and there a lot of people in this room that had a major part in that, teachers, administrators, parents, grandparents, friends, a coaching staff that has taken him in a like a son of their own — I couldn’t ask for a better experience for him to have playing high school football.

“I look forward to watching his career in College Station and, I’m going to go ahead and say it, the best damn quarterback in Lobo history.”