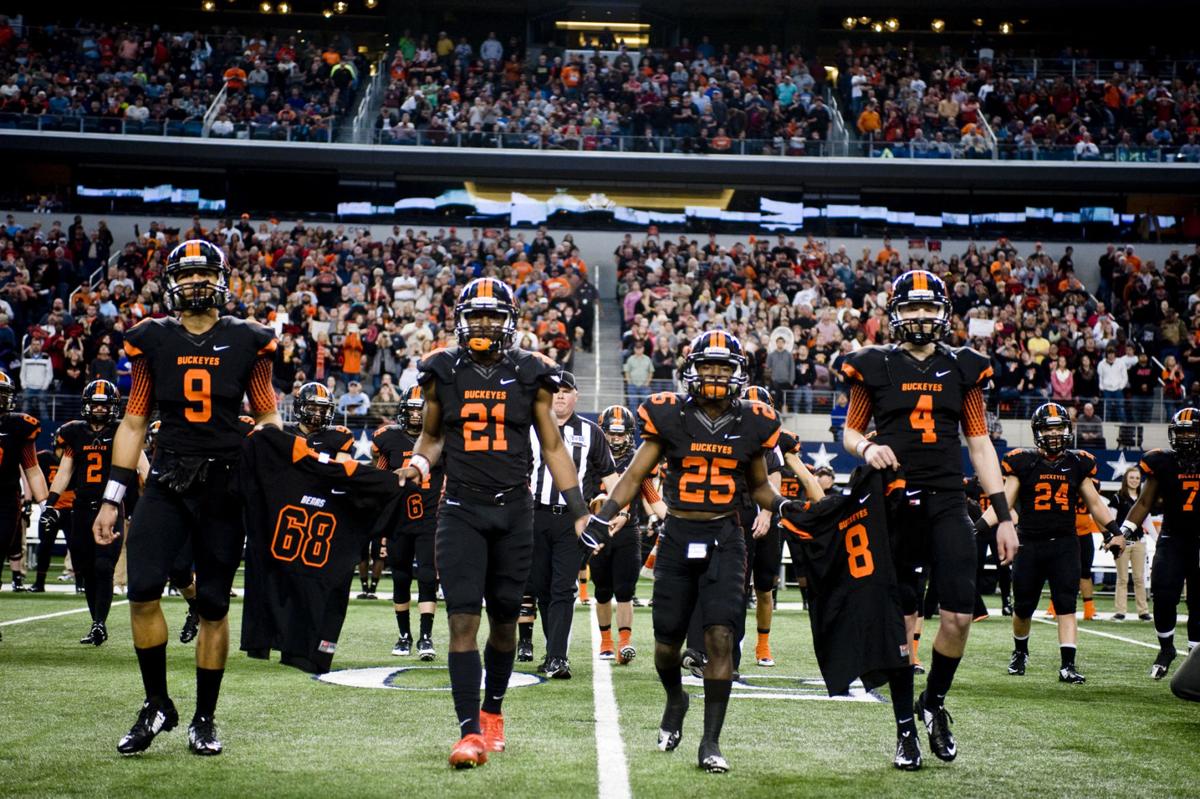 Gilmer prepares for the coin toss, on Friday December 19, 2014, before their state championship game with West Orange-Stark at AT&T Stadium in Arlington. (Michael Cavazos/News-Journal Photo) 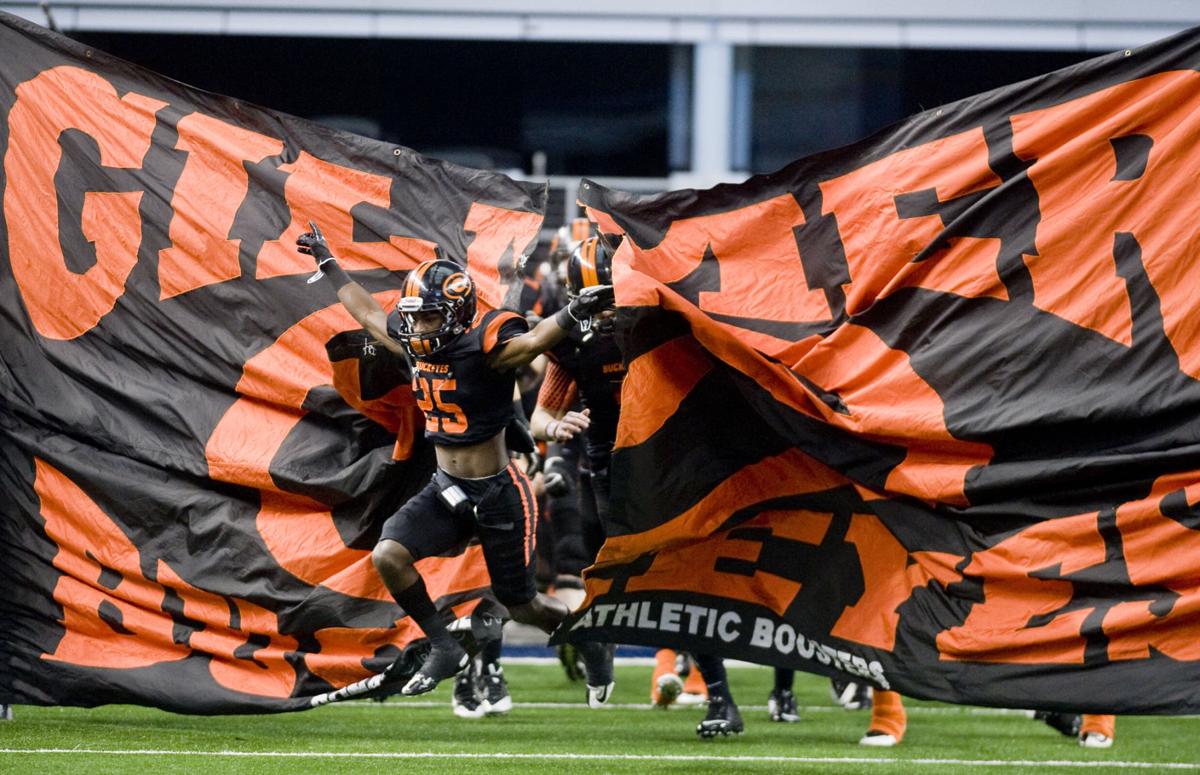 Gilmer takes the field prior to its state championship game agaisnt West Orange-Stark in December 2014 at AT&T Stadium in Arlington. 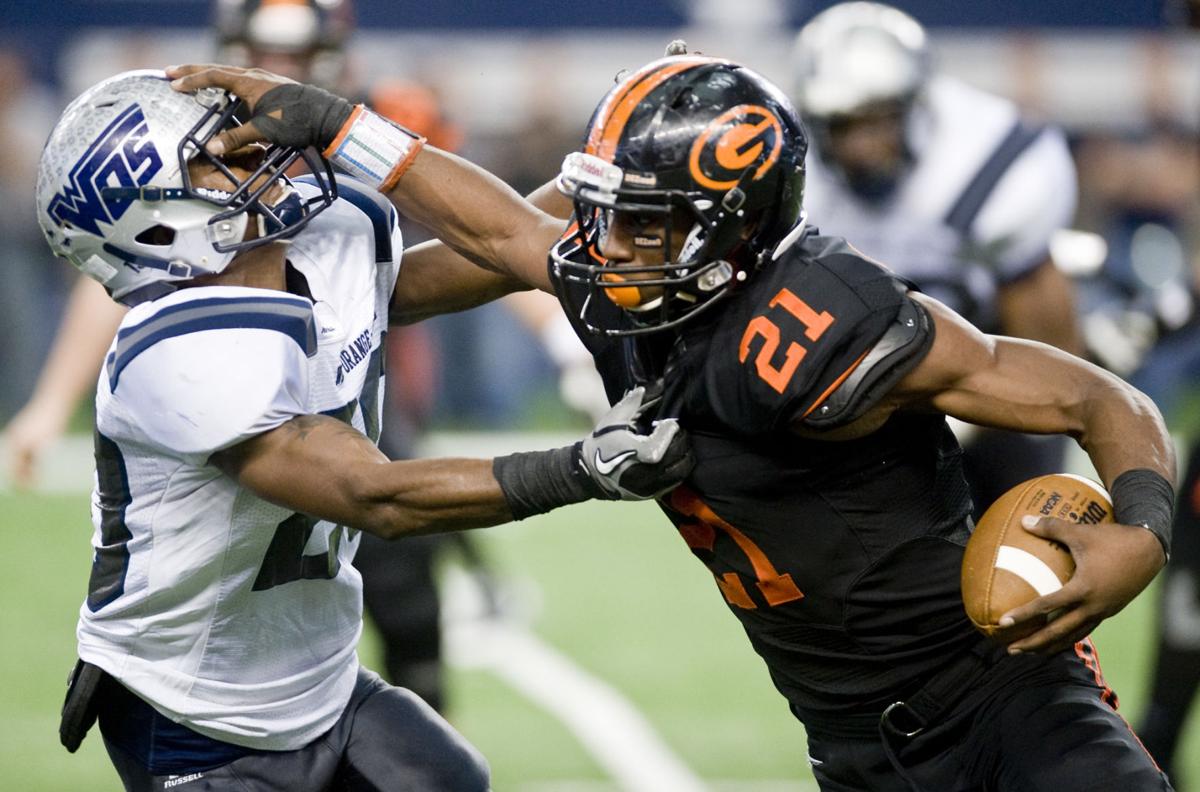 Kris Boyd runs the ball for Gilmer, on Friday December 19, 2014, during their state championchip game with West Orange-Stark at AT&T Stadium in Arlington. (Michael Cavazos/News-Journal Photo)

Gilmer prepares for the coin toss, on Friday December 19, 2014, before their state championship game with West Orange-Stark at AT&T Stadium in Arlington. (Michael Cavazos/News-Journal Photo)

Gilmer takes the field prior to its state championship game agaisnt West Orange-Stark in December 2014 at AT&T Stadium in Arlington.

Kris Boyd runs the ball for Gilmer, on Friday December 19, 2014, during their state championchip game with West Orange-Stark at AT&T Stadium in Arlington. (Michael Cavazos/News-Journal Photo)

■ Editor’s note: This is the fifth in a 10-part series looking back at the top stories of the decade in the Longview News-Journal’s coverage area.

East Texas football teams having success on the football field is almost a given, but 2014 was a remarkable year in the Pineywoods on a different level.

Gilmer and Waskom captured state championships, the third for Jeff Traylor and the Buckeyes in Gilmer and the first for Whitney Keeling in Waskom after the Wildcats had reached the state semifinals the previous season.

Union Grove, which broke a long playoff drought in 2013, proved it planned to be around for the long haul by going 10-0 in the regular season and winning the program's first district championship in more than 40 years.

Sabine snapped a long playoff drought of its own, earning an invitation to the postseason party for the first time since 1985, and Trinity School of Texas finished the year 12-1 and played for a TAPPS Six Man state championship.

Romines won more than 400 games and a state title at Longview and finished his coaching career with a 714-312 record with stops at Wells, Dayton, Hemphill, Hooks, Henderson, Barbers Hill and Longview.

Ray coached at Pine Tree for 15 seasons, winning a state title in 1973, and was a teacher at Pine Tree ISD for 36 years.

Williams was the commissioner of the LBBA for 28 years, and Newhouse had an 11-year career in the NFL with the Dallas Cowboys after setting several school records at the University of Houston.

3. Davis suspended. Former Longview standout Chris Davis was hit with a 25-game suspension late in the season following a second failed test for the banned amphetamine Adderall. Davis had previously been granted a therapeutic use exemption for Adderall, and was again granted that status in 2015.

4. Bobcats go to Round Rock. Hallsville, under veteran head coach Scott Mitchell, earned its first trip to the UIL State Baseball Tournament, losing to eventual state champ Aledo and finishing with a 34-6 record.

6. Diamond success at LETU. LeTourneau's baseball team was picked ninth in the conference preseason poll, but won its first American Southwest Conference Tournament championship and advanced to the NCAA Division III Tournament for the first time - finishing with a 33-15 record.

The LETU softball team reached the ASC Tournament for the first time in program history.

7. Hardwood success and departures. The Tatum and Kilgore boys turned in spectacular seasons, with Tatum returning to the UIL State tournament for the third time in 12 seasons - eventually falling in the Class 2A title game.

Kilgore carved out a 24-7 record and advanced to the regional finals. Following the season, Brett Carr left Tatum and Jeff Coleman left Kilgore - but both men have since returned to those schools.

8. Ladynecks back at it. After making four straight trips to the UIL State Volleyball Tournament, the Ladynecks missed out in 2013 but battled back to the big dance in 2014. The Ladynecks fell to Brock in the state semifinals, finishing with a 32-9 record.

10. Lovie Smith back in the NFL. Former Big Sandy standout Lovie Smith led the Chicago Bears to an 81-63 record in nine seasons, including a trip to the Super Bowl, but he was relieved of his duties in 2012. After a year away from the game, Smith was hired as head coach of the Tampa Bay Buccaneers.