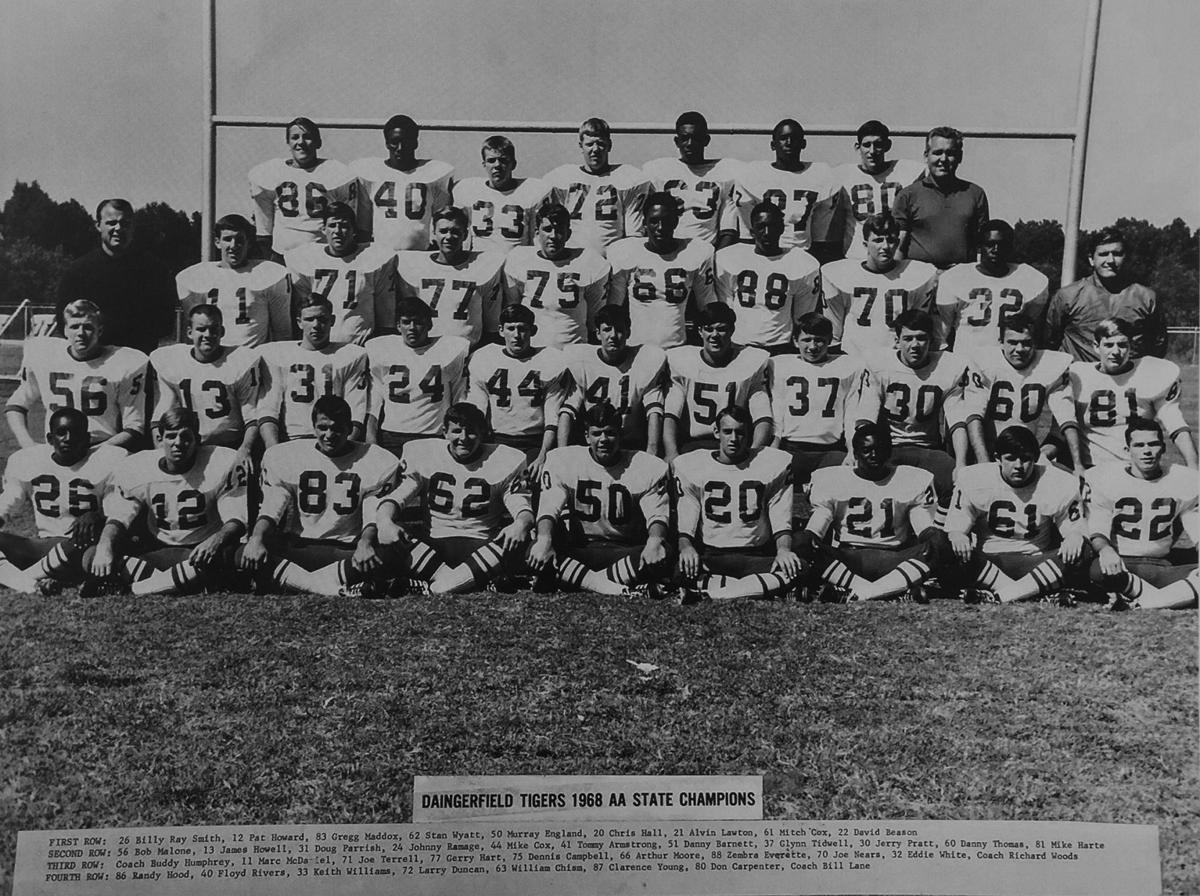 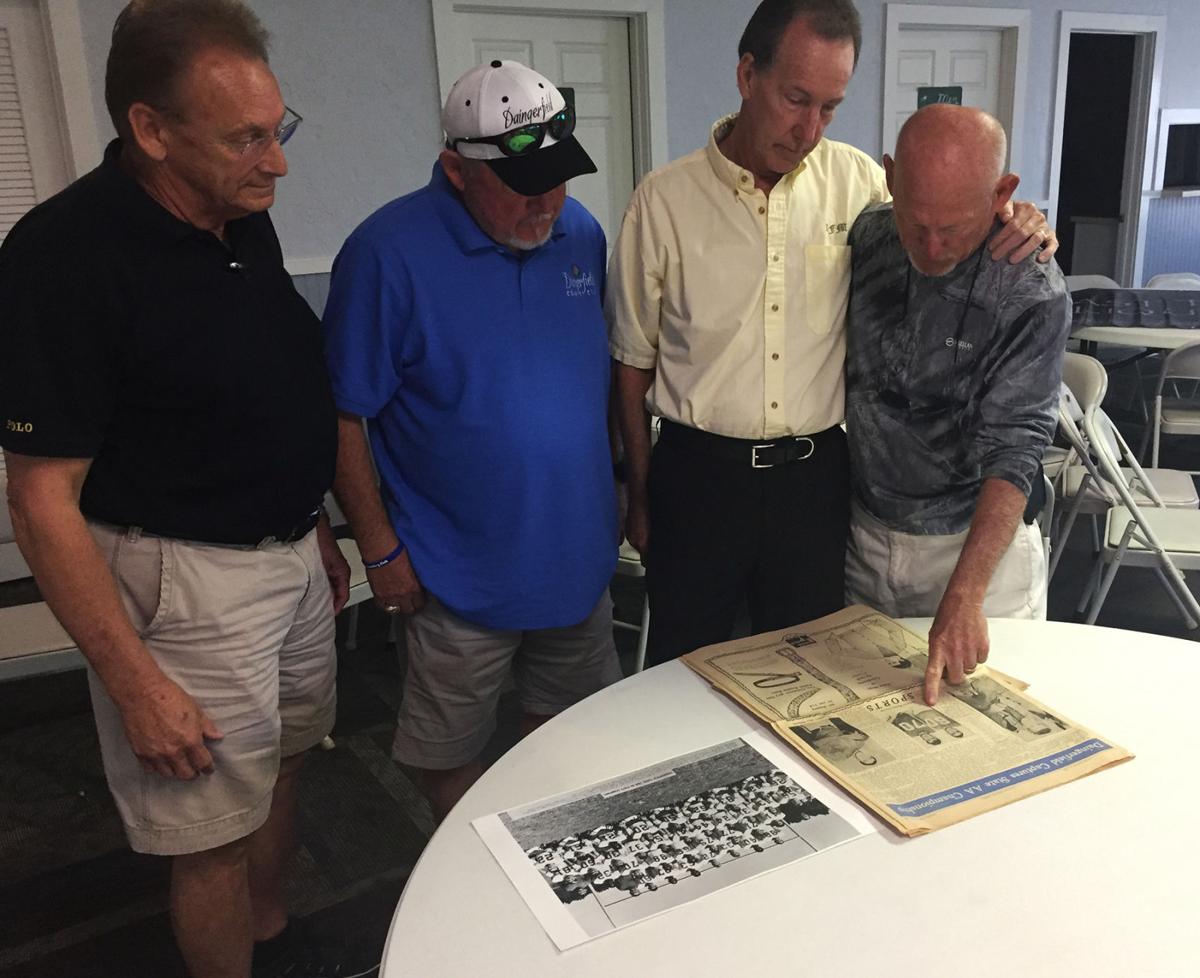 DAINGERFIELD – Times were tempestuous and unstable across the United States in 1968. The civil rights movement was in full swing on the home front, while a controversial war was being waged in south pacific jungles of Vietnam. Two prominent American figures of that era – Robert Kennedy and Martin Luther King, Jr. – had both been slain by an assassin’s bullet.

The two small neighboring northeast Texas communities of Daingerfield and Lone Star had their own set of problems 50 years ago. Integration was coming full circle as J.J. Rhodes closed its doors and black students were being bused to Daingerfield. To make matters worse, Lone Star Steel, the economic lifeblood of the two conjoined communities, was in the midst of a union strike and families were being forced to take sides.

Neatly tucked away in the underbrush of such a turbulent and stormy time in our history, the Daingerfield Tiger football team was making history of its own. And it was doing so in a positive way winning the first of six state championships.

“We were basically a steel town. Most of the people around here worked at Lone Star Steel,” remembered Mitch Cox. “They were also cattle ranchers and farmers and would work their shift at the plant, come back home and take care of their personal property.”

The heightened expectations for Tiger football back in August of 1968 had been buoyed by success of two seasons prior. Head coach Bill Lane arrived on the scene in 1964 and had to overcome the struggles of a 1-9 first season. Lane more than acquitted himself with 11-3 and 12-1 campaigns in 1966 and 1967, respectively.

“Everything going out at the time caused a lot of rifts between families. But on Friday night, everyone put their disagreements aside. The two communities united as one,” added Cox, who owns the Daingerfield Country Club and is organizing the 50-year reunion of the fabled 1968 team.

Mitch, along with twin brother Mike, Marc McDaniel and Chris Hall recently got together at the Daingerfield Country Club to reflect and reminisce on the storied events of a half-century ago.

The two Cox brothers played reserve roles on the team. Mitch was an offensive lineman and linebacker, while Mike played wide receiver and defensive back. McDaniel was an all-state quarterback and went on to play at Rice University, while Hall started at offensive halfback and would eventually get drafted by the Montreal Expos. All four men have aged well and continue to relish the memories of that first state title.

“Most people will tell you the 1983 Daingerfield team was best. But we can always say we were first,” said Hall, who is a home builder and lives in Longview.

“Whenever we started practice that August – the years before we’d been to the quarterfinals and semifinals – I believe our team was expected to go on and win the state championship,” Mike Hall offered. “We’d made it one step further each of the last two seasons, so it wasn’t a question of if we were going to win, but by how much?”

McDaniel echoed the sentiments of Mike Cox, regarding Daingerfield’s jump start from the two seasons earlier.

“To me those two previous years set the pace and expectations. My sophomore year, we were called a Cinderella team, because every week we were expected to get beat,” said McDaniel, who like Mike Cox, coached high school football for 30 years.

The prospects could have been bleak for Daingerfield as the new school year commenced. McDaniel was the Tigers’ only returning starter from a once-beaten 1967 squad. But prognosticators seemed unconcerned and boldly forecasted a midseason showdown between Daingerfield and Gladewater to determine district champion.

But things didn’t exactly start swimmingly for the Tigers as they stumbled out of the gate. It was a Friday the 13th, appropriately enough, when the Paul Pewitt Brahmas slipped out of town with a 29-14 upset. The Brahmas weren’t exactly slouches in 1968 and finished with an 8-4 record.

“Obviously we were upset, discouraged and disappointed,” McDaniel recalled. “Of course we were expected to win, but we just didn’t play well. And those Pewitt boys had a real good football team.”

Things weren’t looking a lot better when Daingerfield paid a visit to Atlanta the following Friday. The Rabbits had jumped out to a 9-0 halftime lead and the Tigers were forced to do a little soul searching.

“Coach Lane challenged us at halftime of that game. We had to make our season and we had to turn things around. Last thing we wanted to do was go 0-2 to start,” said Hall. “I would get pretty emotional and I remember coming out fired up for the third quarter.”

The Tigers responded favorably in the second half, reeling off three unanswered scores and beating the Rabbits, 21-9. This would be the first of 14 consecutive dominos to submit as Daingerfield got on a roll.

“That Tiger Pride is hard to describe,” said Mitch Cox. “This was so much more than just our football. The band, cheerleaders and pep squad all played a part and were big contributors to the success.”

From the second half of the Atlanta game, the Tigers were indomitable and never looked back. A nip-and-tuck scrap with DeKalb the following week gave way to decisive victories over Gilmer and Linden-Kildare the following weeks.

Stage was set for the much-anticipated face-off with Gladewater on Oct. 18 at Tiger Stadium. The game more than lived up to its pregame hype with Daingerfield eking out a 27-20 thriller. The Bears had driven inside the Tiger 10 when the final horn sounded.

The Tigers gained steam the final four weeks of the regular season with convincing verdicts over Hallsville, Pittsburg, Jefferson and West Rusk. This vaulted them into postseason on a nine-game win streak.

Texarkana’s Grim Stadium was site for Daingerfield’s first-round playoff and it would be a rematch with week three opponent DeKalb. Before a standing-room-only packed house, the Tigers had a little easier go of it the second time around with DeKalb.

“We had the barnburner with them earlier and knew it could be tough,” Hall recalled. “It was tight early and we led 14-7 at halftime. But we came out in the second half and dominated.”

The Tigers successfully disposed of Kaufman at Rose Stadium in round two and followed with third round decision over San Saba at UT-Arlington. Chartered buses were loaded as the Tigers advanced to the Class 2A semifinals for a meeting against Iowa Park at the Gopher Bowl in Grand Prairie.

“It’s a big deal when you grow up in Daingerfield and get to experience things like riding chartered buses. That’s big time for us small town boys. You start playing in much bigger stadiums than Tiger Stadium. The crowds filled up the stadium and that just grew the emotion and excitement of everything we were doing,” Hall said of taking in the big city.

“They said on the nights we played in the playoffs, there was nobody in town but the police,” Mitch Cox recalled. “I heard the police department actually drew straws to see who could go with the bus wherever we were playing. Daingerfield and Lone Star were like ghost towns.”

Daingerfield managed to hold on for a 14-7 win over Iowa Park and found itself bound for the first state championship game in school history. The opponent, Lufkin Dunbar, was in the midst of a 58-game winning streak and won back-to-back state titles in the Prairie View Interscholastic League and three in a four-year span.

Dunbar, an all-black school competing in the UIL, would not integrate with Lufkin High School for another two years. They were led at quarterback by the talented D.C. Nobles and PVIL coaching legend Elmer Redd.

The old SFA Stadium was selected as site for the Class 2A championship clash on Dec. 20, 1968. Despite Dunbar’s amazing talent and speed, Daingerfield felt it equal to the task.

“We’d kept getting closer and closer,” Mike Cox explained, to which McDaniel added, “We’d proven ourselves to be playoff contenders from the previous two years.”

“Worst conditions that you could have,” McDaniel added.

A steady deluge of rain had turned an already well-worn field into an absolute quagmire.

After a scoreless first half, Dunbar scratched for the first score late in the third quarter when Kenneth Williams bulled his way in from three yards out over left tackle. The all-important point after failed and Daingerfield found itself in a 6-0 hole with less than 30 seconds remaining in the quarter.

Dunbar likely wouldn’t have scored had it not been for a botched punt attempt that gave its possession inside the Daingerfield 15 yard line. On the ensuing drive for the Tigers meandered their way to midfield. Hall, who possessed blinding speed, ignited the march with his 44-yard dash to the Dunbar five.

Eddie White would write his name in Daingerfield folklore when he pushed his way in from five yards out to tie the game 6-6 with 10:20 left in regulation. Larry Duncan, with the help of McDaniel’s hold, was true on the point after to give Daingerfield a 7-6 lead.

That was the score when the clock hit triple zeros and Daingerfield was well on its way to becoming East Texas’ version of Title Town. The Tiger Pride, as Mitch Cox fondly refers, has added crowns in 1983, 1985, 2008, 2009 and 2010. Daingerfield stands side-by-side with Carthage, representing the most state titles in East Texas annals at a half dozen.

But it all got started back in 1968 when a community, so desperately in need of something positive, got just the infusion it needed from Bill Lane’s Daingerfield Tiger football team. The team will be celebrated on Saturday, Sept. 8 from 4:30 p.m. to 7 p.m. to be followed by the 2018 version of Tigers playing host to the Tatum Eagles.