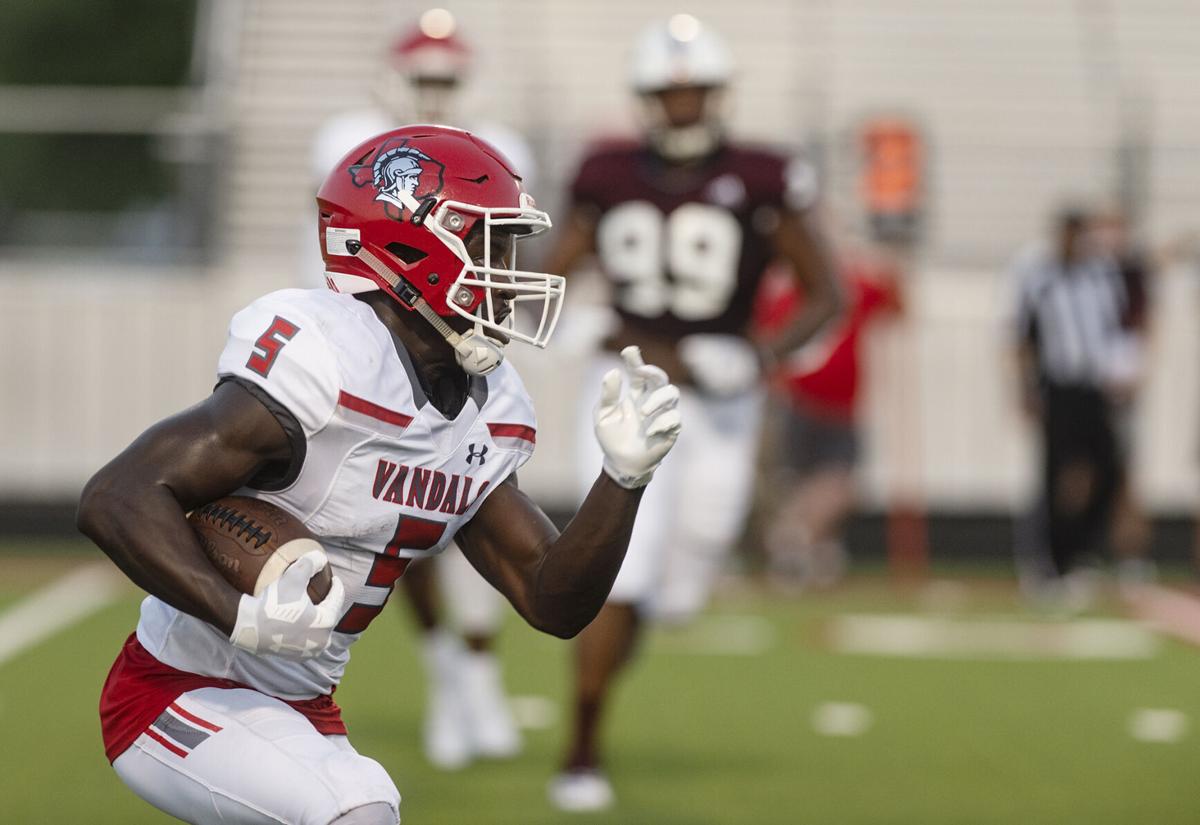 Van High School football player Javonta Thomas carries the ball during their first game of the season at home against Palestine on Friday, Aug. 28, 2020. 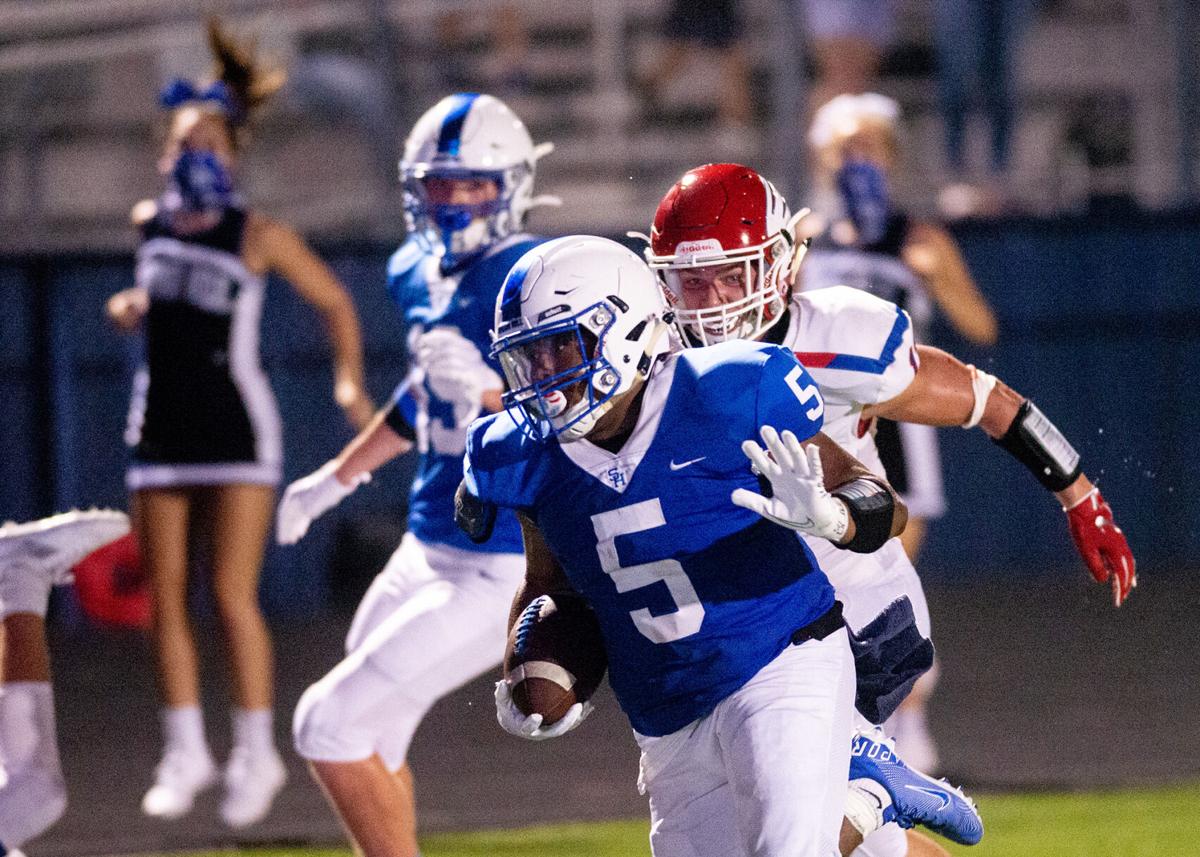 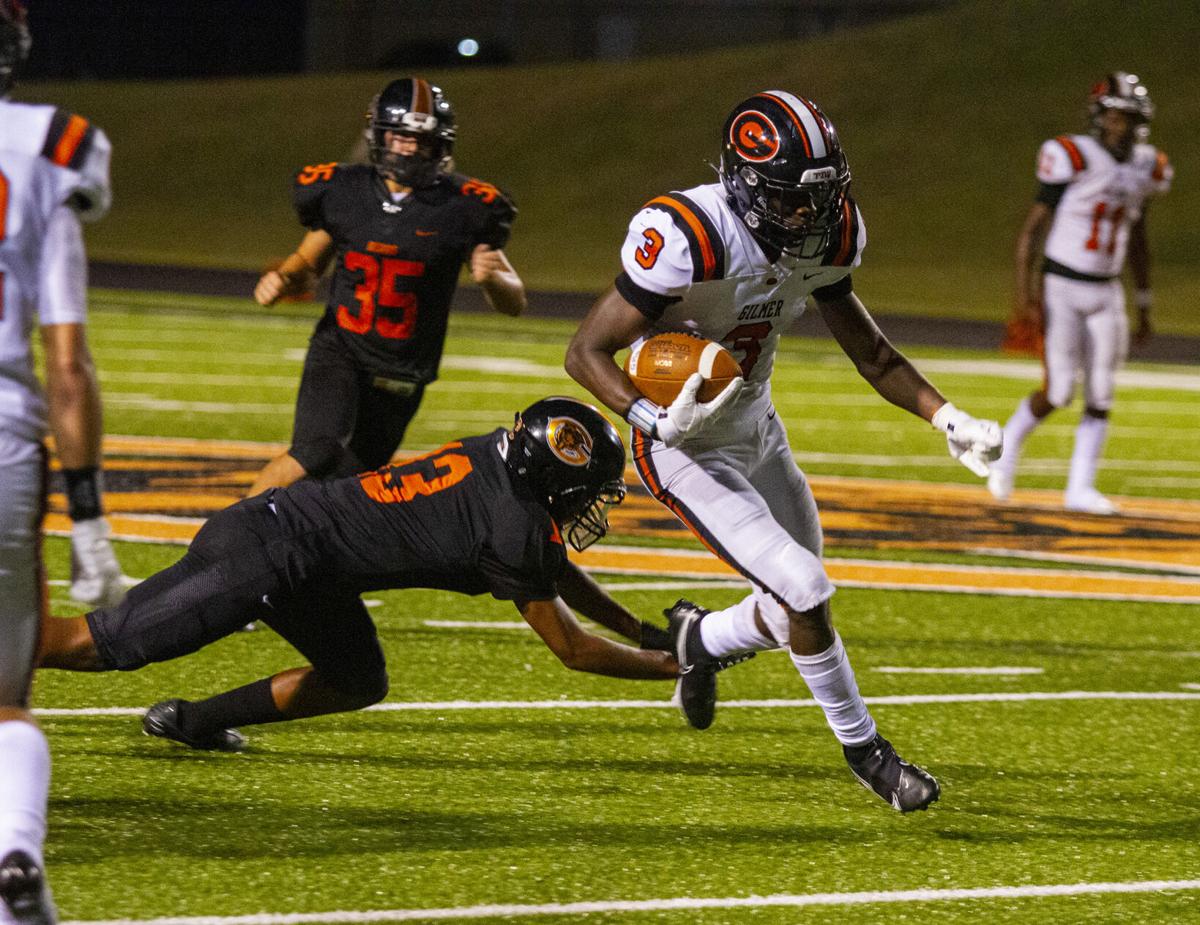 Gilmer’s Davion Smith breaks a tackle against Gladewater on August 28 in Gladewater.

Van High School football player Javonta Thomas carries the ball during their first game of the season at home against Palestine on Friday, Aug. 28, 2020.

Gilmer’s Davion Smith breaks a tackle against Gladewater on August 28 in Gladewater.

Quick hits: Kilgore hopes to get off to a better start than it did last week against top-ranked and defending Class 4A DII state champion Carthage. The Bulldogs were limited to 27 yards rushing and a 1.2 average. Terrell, bu contrast, opened with a resounding 59-0 whitewash of Wills Point in its season lidlifter.

Up next: Chapel Hill at Terrell; Kilgore at Alvardao

Quick hits: The Gilmer Buckeyes got a top-notch performance from junior signal-caller Brandon Tennison in a 55-41 season-opening win over the Gladewater Bears. The Henderson Lions must account for Tennison at all times after he piled up 441 yards in total offense with five TDs. Former Buckeye QB Mason Hurt transitioned nicely yo wide out and hauled in 108 yards on five receptions.

Up next: Gilmer at Atlanta; Henderson at Kaufman

Quick hits: The Mount Vernon Tigers proved quick starters last week in their 53-14 hammering of the Hooks Hornets. The Tigers cruised to a 24-0 lead after 12 minutes of the young season and held a commanding 39-0 advantage at the break. Pittsburg, meanwhile, was locked in a good old fashioned nailbiter against Jefferson. The Pirates eventually succumbed in a 28-22 thriller.

Up next: Paul Pewitt at Mount Vernon; Pittsburg at Tatum

Quick hits: It was a night of offensive fireworks for the Tatum Eagles in their wild and crazy 63-62 win over the Center Roughriders last week. Eagle QB Kendric Malone was a one-man wrecking crew with 402 yards total offense and 4 TDs. This should be a showcase for top East Texas signal-callers as Daingerfield’s talented Zaylon Jeter led his Tigers to a hard-fought 16-6 season-opening win over the Atlanta Rabbits.

Up next: Pittsburg at Tatum; Daingerfield at Sabine

Quick hits: Picking up right where they left off in 2019, the Sabine Cardinals scored a 17-14 win over the Spring Hill Panthers. Jace Burns made the most of his varsity debut at quarterback. Burns totaled 210 yards in offense with a touchdown. This will be the season opener for the West Rusk Raiders and second-year boss Nick Harrison.

Up next: West Rusk at Mineola; Daingerfield at Sabine

Quick hits: Offensive fireworks should be expected in this one. The Jefferson Bulldogs are fresh off a tough battle against the Pittsburg Pirates as QB Josh Thomas totaled 328 yards in offense with 3 TDs in a 28-22 win. The Center Roughriders dropped a heartbreaking 63-62 verdict to the Tatum Eagles. Roughrider halfback Keamodre Horace had a career-night in a losing cause with 217 yards on the ground and 5 TDs.

Up next: Gladewater at Center; Liberty-Eylau at Jefferson

Quick hits: It was a good start for both Elysian Fields and Joaquin in 2020 last week with victories. The Yellow Jackets rolled to a 34-20 decision over the Harmony Eagles, while the Rams hammered out a tough 8-6 verdict in their opener. Joaquin must account for EF’s talented Jackson Illingworth on both sides of the leather. Illingworth hauled in 64 yards receiving and totaled 23 stops on defense last week in the Jackets’ triumph.

Up next: Winona at Elysian Fields; Joaquin at Groveton

Quick hits: Waskom had little difficulty disposing of the Garrison Bulldogs in a 47-6 rout. Things get a little tougher this week as the state-ranked San Augustine Wolves bring their pack to town. The Wolves did not play last week and could be on the prowl. Wildcat QB Cole Watson was a cool four of four passing for 103 yards and 3 TDs in the win over Garrison.

Up next: San Augustine at Elkhart; Waskom at Shelbyville

Quick hits: The Clark Harrell era at New Diana got off to a rocky start last week with resounding 42-7 setback against New Boston. The Eagles hope for more favorable results tonight against the Redwater Dragons, which suffered a 21-18 loss to Ore City in their opener.

Up next: Edgewood at Redwater; New Diana at Harmony

Quick hits: A narrow two-point loss against Joaquin has the Beckville Bearcats ready to make amends this week against the Harleton Wildcats. This one could very well go down to the wire. The Wildcats saw their season opener with White Oak cancelled. You can bet second-year Harleton head honcho Kyle Little will have his crew ready to roll.

Up next: Rivercrest at Harleton; Maud at Beckville

Quick hits: Still smarting from a 53-16 whipping at the hands of Chisum, the Union Grove Lions look to regroup and rebound against the undefeated Queen City Bulldogs. Queen City snapped a 27-game losing streak that dated all the way back to the 2017 season. The Bulldogs scored a 14-0 shutout of the Linden-Kildare Tigers. The Lions are hoping for another solid showing from Chase Mead and Matthew Bower. The duo totaled 257 yards on the ground in a losing effort.

Up next: Alba-Golden at Union Grove; Queen City at Quitman

Quick hits: The Carlisle Indians were surprised in their lidlifter last week by Palestine Westwood in a 40-21 stunner, while the Troup Tigers also scored a somewhat surprising 27-0 whitewash of Alto in their opener.

Up next: Alto at Carlisle; Bullard at Troup

Quick hits: In this battle of striped cats, Clarksville wants to build upon its 17-14 season-opening win over Whitewright, while Linden-Kildare wants to regroup and bounce back from a 14-0 blanking against Queen City.

Up next: Clarksville at Tom Bean; DeKalb at Linden-Kildare

Quick hits: It’s a 6-man showdown of top 10 squads this evening when the Union Hill Bulldogs entertain the Blum Bobcats at Bill Bass Stadium. Union Hill kicked off 2020 with a 57-12 win over Stephenville Faith. Blum was a 56-6 victor over Aquilla.

Up next: Blum at Gorman; Coolidge at Union Hill

Quick hits: The Leverett’s Chapel Lions got off to a roaring good start last week with a 56-0 shutout of Willow Bend.

Up next: Leverett’s Chapel at Fannindel; No information available for Tyler HEAT

Quick hits: Ford, who was the starting quarterback at John Tyler last season, was named the Built Ford Tough Texas Class 4A Player of the Week and the Tyler Morning Telegraph Offensive Player of the Week for his performance in a 65-33 win over Splendora … Chapel Hill was originally scheduled to play rival Whitehouse this week.

Up next: Henderson at Kaufman; Terrell at Chapel Hill

Quick hits: Jenkins is a four-star Baylor commit … Midlothian Heritage opened with a 42-14 win over Wichita Falls Hirschi … Walker is committed to Houston as an offensive guard.

Up next: Van at Lindale; Midlothian Heritage at Decatur

Quick hits: Bullard held Mabank to 40 yards passing and 179 total yards in a 17-12 victory … Caddo Mills opened with a 42-20 victory over Gainesville.

Up next: Canton at Caddo Mills; Bullard at Troup

Quick hits: Malakoff opened the season with a 31-24 overtime loss to Class 3A Division I No. 2 Grandview … Four of Malakoff’s six losses since 2018 have been to Grandview, which has won two straight state titles … Thomas had a passing, rushing and receiving touchdown in a 33-7 win over Palestine.

Up next: Van at Lindale; Trinity Christian-Cedar Hill at Malakoff

Up next: Life Waxahachie at Brownsboro; Athens at Fairfield

Up next: Athens at Fairfield; Life Waxahachie at Brownsboro

Quick hits: Pendergrass and Moreland are sophomores … Sneed is committed to SMU, and Anderson is a Colorado pledge … Wills Point lost to Terrell in the opener, 53-0.

Up next: West Rusk at Mineola; Wills Point at Mabank

Quick hits: Arp is opening the season with three straight road games. The Tigers' first home game is scheduled for Sept. 17 against Waskom. ... Arp lost two standouts — Kajun Horton and Tren Jones (Tyler Junior College) — to graduation. Arp went to the playoffs 11 straight years before missing the last two seasons. ... This is Coach Dale Irwin's 18th year as head coach of the Tigers. He has taken his team to the playoffs 13 times

Up next: Frankston at Huntington; Winona at Elysian Fields

Quick hits: The Wildcats are in a rebuilding year after losing standouts Caden Minter (Tarleton State) and Kedron Brown. ... Coronado will be a leader as he will be starting his third year. ... The Wildcats will be young with 22 freshmen. ... Alba-Golden lost a heartbreaker last week to the Patriots. ... The Panthers are favored by 10 points over the Wildcats, according to TexasFootball.com.

Quick hits: Just a week after moving to Rusk from Myers Park, North Carolina, McCown — son of former NFL quarterback Josh McCown — accounted for more than 300 yards and four touchdowns for the Eagles .

Up next: Buffalo at Crockett; Rusk at Palestine

Quick hits: Winnsboro’s opener against Paul Pewitt was canceled due to COVID-19.

Up next: Hughes Springs at Winnsboro; New Boston at Hooks

Up next: Grand Saline at Rains; Edgewood at Redwater

Quick hits: Palmer opened the season with a 35-7 win over Kemp … Grand Saline opened with a disappointing 54-0 loss to Cooper last week

Up next: Palmer at Bosqueville, Sept. 11; Grand Saline at Emory Rains, Sept. 11.

Quick hits: The Bears used their speed to outrun the bigger Frankston squad last week. ... Timpson has made the playoffs six straight years, but is hopeful of winning its first district championship since 2004 and first outright title since 1993. ... It is the second straight home game for the Yellowjackets before they have three consecutive road games. ... Alto is coached by Ricky Meeks, son of legendary coach Dickey Meeks who passed away recently

Quick hits: Elkhart had a tough going against the Bison of Buffalo. ... The Elks have missed the playoffs for five straight years and are looking for their first district title since 1991. ... The Elks lost a key player Ky Thomas, who is now at SFA, to graduation. ... Moore rushed for 1,124 yards last year with Birdow grabbing 15 receptions for 402 yards and six TDs.

Quick hits: Hawkins wants to be build on last year's playoff appearance, the Hawks' first since 2009. ... The Hawks are favored by 14 points over the Pirates, according to TexasFootball.com.

Up next: Kemp at Scurry-Rosser; Queen City at Quitman