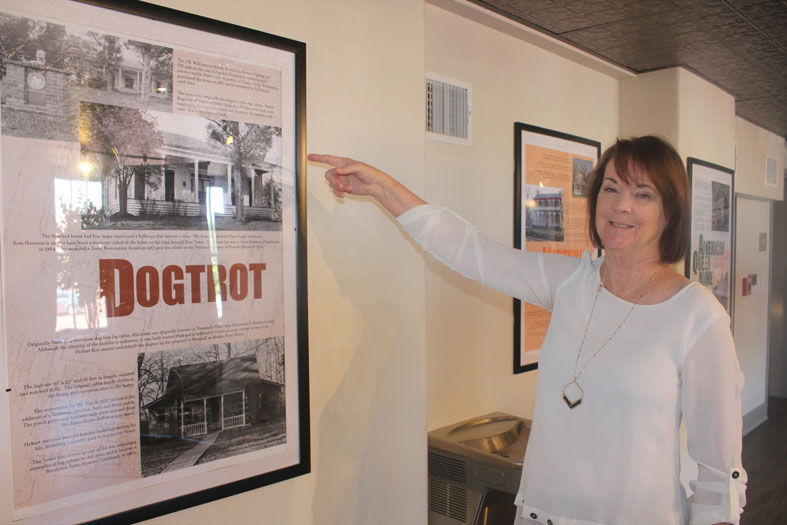 Becky Palmer, executive director of the Harrison County Historical Museum, invites the public to the traveling exhibit, “The Way Things Were: Texas Settlers and their Buildings from 1860 to the 1930s,” sponsored by Humanities Texas, through Oct. 24. 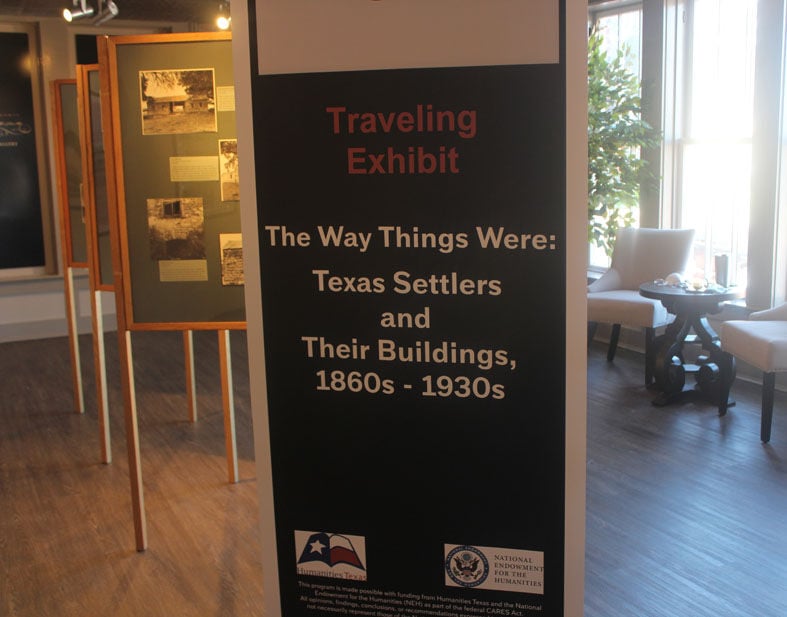 The Harrison County Historical Museum presents the traveling exhibit, “The Way Things Were: Texas Settlers and their Buildings from 1860 to the 1930s,” sponsored by Humanities Texas, through Oct. 24, inside the museum gallery at Memorial City Hall.

Becky Palmer, executive director of the Harrison County Historical Museum, invites the public to the traveling exhibit, “The Way Things Were: Texas Settlers and their Buildings from 1860 to the 1930s,” sponsored by Humanities Texas, through Oct. 24.

The Harrison County Historical Museum presents the traveling exhibit, “The Way Things Were: Texas Settlers and their Buildings from 1860 to the 1930s,” sponsored by Humanities Texas, through Oct. 24, inside the museum gallery at Memorial City Hall.

A reflection of the life and family of Texas settlers — as depicted through historical buildings — is now on exhibit as the Harrison County Historical Museum presents “The Way Things Were: Texas Settlers and their Buildings, 1860s to 1930s,” a traveling exhibition.

The exhibit, on display through Oct. 24, is in the museum gallery inside Memorial City Hall in downtown Marshall.

“This is a photographic exhibition of Texas settlers and their buildings from 1860 to the 1930s,” museum Executive Director Becky Palmer said.

The exhibit is sponsored by Humanities Texas, the state affiliate of the National Endowment for the Humanities.

“These are houses that come from all around the state, and you’ll notice that they mimic ours, somewhat,” Palmer said, referring to the inclusion of Harrison County’s own historic architectural design and structures in the exhibit.

According to Palmer, the exhibition looks at early Texas buildings for information about settlers’ visions of community and progress and their accommodation to the physical demands and economic realities of everyday life.

“Print resources that accompany the exhibit help audiences explore our cultural heritage, modern attitudes toward the past and our duty to future generations,” noted Palmer.

Harrison County sitesThe Harrison County portion of the exhibit features historic facts and photos of the architectural styles of some of the county’s own notable homes, including dogtrots, folk Victorians, Greek Revivals, American Queen Annes, and Victorians.

“These are all Marshall and Harrison County buildings,” Palmer said.

The exhibit posters were all designed by local historian and business owner Bill T. Whitis of the Print Shop. The photos and information came from the museum’s Inez Hatley Hughes Research Center and Library.

“He did a fabulous job,” Palmer said of the posters designed by Whitis. “In the background of each poster is an architect’s floor plan for that style home, and those floor plans were pulled from our files.”

“Everything in the exhibit, except for the center (Humanities of Texas traveling exhibit) part, came from the files of the Inez Hatley Hughes Research Center,” Palmer said. “We pulled all of this together.”

“Most of these are simply farm houses,” Palmer said. “These are old farm houses from early, early Texas.”

“The brush arbor is very interesting,” she added. “That’s where they all had their revivals.”

“It has various miscellaneous (features),” Palmer said of the main exhibit, focusing on the life and community of settlers across Texas.

Regarding the Harrison County structures featured in the exhibit, one of the dogtrots on display is an 1842 home that was originally built as a two-room log cabin in Marion County. Hobart Key later moved and rebuilt the dogtrot on his property in Marshall on Henley Perry Street. According to the museum’s records, the home also serves as one of the few remaining examples of log cabins in this area, and it became a recorded Texas Historic Landmark in 1965.

“Dogtrots have even sides and breezeway,” Palmer said of the architectural design, explaining how doors were originally built to allow for a large, open breezeway that flows through the center of the house.

“This was all open, clear to the back, for air to flow through,” Palmer said. “And people have closed those breezeways in.”

The Victorian homes in the exhibit are some of the most recognizable in the county. The exhibit features the Ramsey-Bibb Home, the Todd-McKay-Wheat home, which was built in the 1850s; and the Heartsill Home.

“These are all Victorian style and they all exemplify the scroll work, and the big porches,” Palmer said.

The Ramsey Bibb Home, located at 515 E. Houston, was built in 1904 for Texas & Pacific traveling engineer Robert Randolph Ramsey, according to museum archives. The home was later purchased in 1914 by Joseph Hall Thompson Bibb Sr., a local attorney and first president of the Marshall Chamber of Commerce.

The folk Victorian was a smaller scale Victorian home. One of the ones on display in the exhibit is a 1900 photo of the Hudgins-Allen Home at the corner of Alamo and 500 E. Austin St., in Marshall. According to the museum archives, the house was built in 1877 by William Phillip Hudgins and boasts 11 rooms.

“American Queen-Anne is kind of a ramped up Victorian,” Palmer said of the classical detailing. “You can tell that there’s kind of a cross-over here; but they include a whole lot more angles and roof angles and triangles and gingerbread (elements).”

The exhibit also showcases many of Marshall’s Greek revival homes.

“What signifies Greek Revival is the columns, the balconies and they’re even on each side,” said Palmer. “It’s kind of cool.”

Greek Revivals featured are the Allen House at 610 N. Washington; the original Marshall National Bank building at the corner of North Washington and East Austin streets; and Edgemont Hall, built on Farm-to-Market Road 3379, in 1844, from hand-made red bricks made onsite.

Artifacts from Magnolia Hall, the Allen House and the renowned Ginocchio are also on display.

Also included in the Harrison County portion of the exhibit is the architectural history of the historically black Bethesda Missionary Baptist Church.

“We’re working very hard to try to exhibit all citizens of Harrison County in all our exhibits where we can,” Palmer said of the museum’s goal to promote diversity. “All of our artifacts were donated by families.”

The history of Bethesda was provided by the Rebecca Buard family. It showcases the oral interviews of Mrs. Polete Buard and Max S. Lale. The display of Bethesda concentrates on the design evolution of the church.

“The interview points out that the original Bethesda Baptist Church, when they got ready to build a new building they took elements of this architecture (from the original building),” Palmer noted. “They replicated because they loved the design. You can see that they have brought these elements through to each (new) church. You have a three-column. The windows mimic this same one. So they upgraded, but they kept design elements.”

“The Buards were (among) founders of the church. To actually have Rebecca’s family telling about the three buildings (is special),” Palmer said.

Virtual lecturesThe executive director said the museum will also offer two virtual lectures as an extension of the traveling exhibit.

“We are excited that once we booked this Texas Humanities exhibit, that they gave us a grant to extend it and expand on it,” said Palmer.

“The Starr Home is Greek Revival and she’s going to do a ‘Journey’s’ lecture on the Starr family and their journey to Harrison County and what they did once they were here,” Palmer said.

Both lectures will be available on all of the museum’s social media pages: Harrison County Historical Museum; the HCHM Inez Hatley Hughes Research Center and Library; and the Service and Sacrifice Harrison County at War group.

“We’re stepping out into the virtual realm,” Palmer said.

What: “The Way Things Were: Texas Settlers and their Buildings from 1860 to the 1930s” traveling exhibit