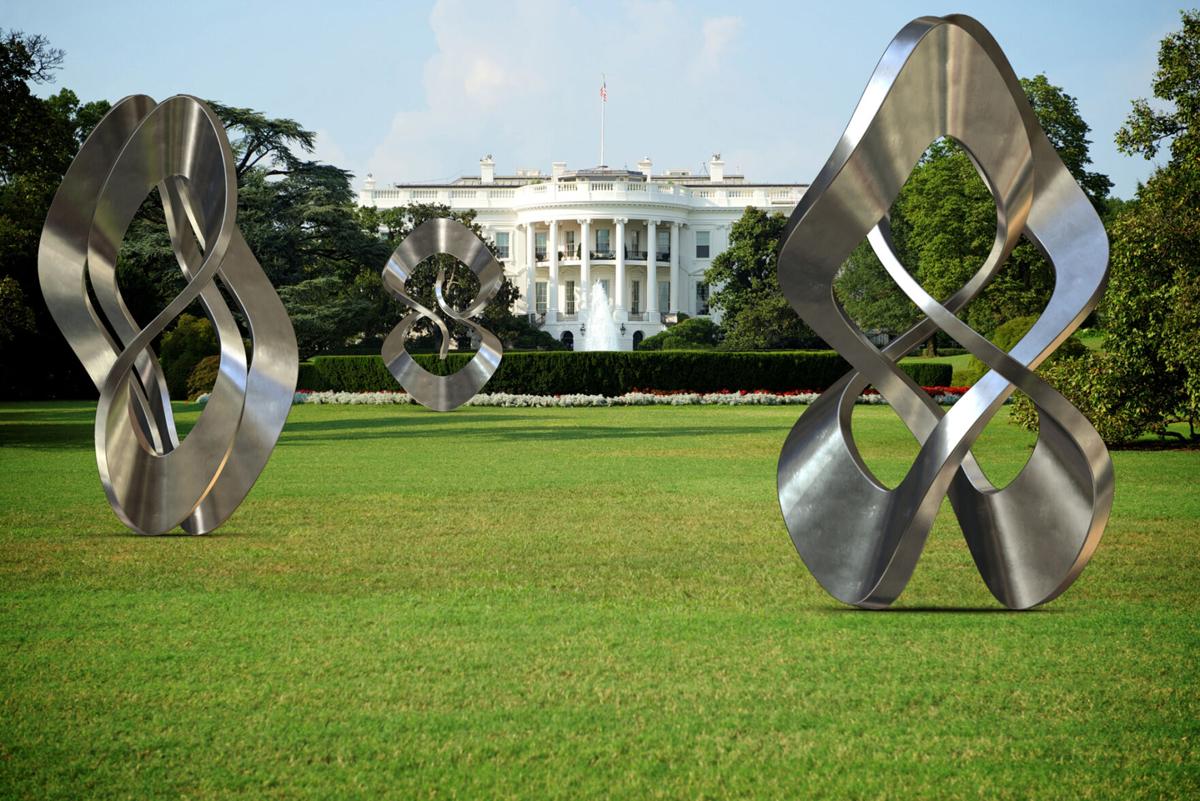 Sculptor Anton Bakker’s virtual artworks can be viewed anywhere, via an augmented-reality app that uses your smartphone’s camera to situate the math-inspired works in real-world settings. 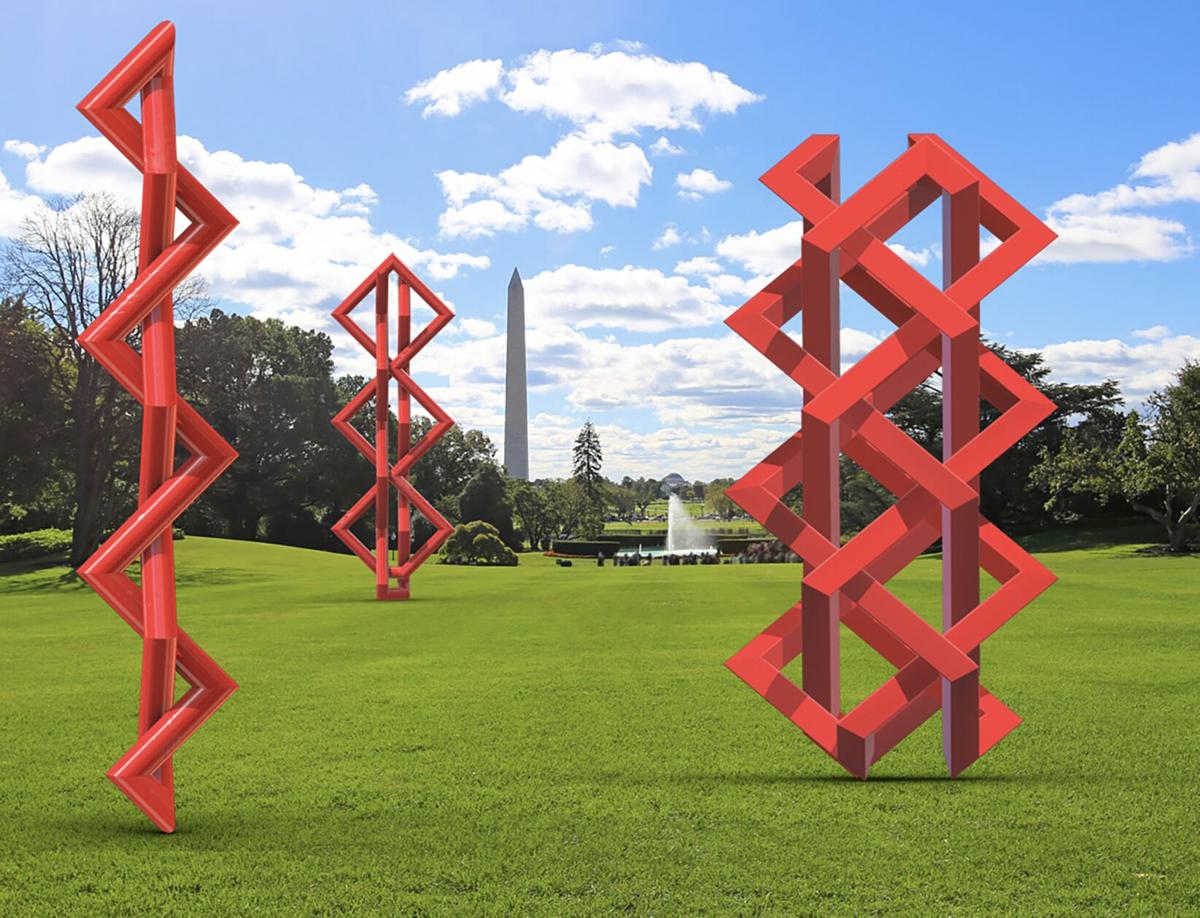 Virtual “Polyline” sculptures by artist Anton Bakker, part of the exhibition “Global Perspective: Math, Art and Archtecture Around the World.”

Sculptor Anton Bakker’s virtual artworks can be viewed anywhere, via an augmented-reality app that uses your smartphone’s camera to situate the math-inspired works in real-world settings.

Virtual “Polyline” sculptures by artist Anton Bakker, part of the exhibition “Global Perspective: Math, Art and Archtecture Around the World.”

Abstract sculptor Anton Bakker’s math-derived structures are on exhibit at some of the world’s best-known sites, including the Washington Monument grounds, New York’s Times Square and equally prominent locations in Paris, Tokyo, Mexico City and more. Now, they’re also in your backyard and living room.

This is possible because the sculptures are not, of course, really anywhere. They’re virtual entities that can be seen only through cellphones and other camera-equipped mobile devices, not with the naked eye. Observed via a digital lens, though, the sleek creations housed at globalsculpturepark.com have a compelling presence. They can be approached, circumnavigated and — it almost goes without saying — selfie-ized. (Click the “Activate AR” button to bring up the augmented-reality display, which places the artworks, virtually, in your own environment.)

The series of displays, titled “Global Perspective: Math, Art and Architecture Around the World,” will continue through the end of 2021. Every month brings a new set of designs, each with a particular theme, such as fractals, optical illusions and Mobius strips. The complex (and bright red) “Polyline” figures now on view will be replaced by silvery “Knots” at the beginning of March.

The pieces in all the monthly displays are in the tradition of such modernist sculptors as Constantin Brancusi, Alexander Calder and Isamu Noguchi, whose work is streamlined and sinuous. But Bakker’s inventions are more complex, regular and symmetrical, although the latter two qualities tend not to be immediately evident.

“Sometimes I feel I’m more of a discoverer than a sculptor,” says the Netherlands-raised artist, while giving a recent tour, on the Washington Monument grounds, of artwork that was unseen by everyone else who passed by. What his creations demonstrate, he explained, is “the beauty that exists at the atomic level.”

If Bakker’s project sounds a bit like the art-world equivalent of “Pokémon Go,” that’s not coincidental. The artist founded a Norfolk data-mining company that collaborated with California’s Niantic on a mobile game, “Ingress,” whose geolocation technology led to the Pokemon-hunting app.

After the 2018 death of his mentor, Jacobus “Koos” Verhoeff, Bakker sold his business and turned to art full-time. “Now I do data-mining for beauty,” he says.

That wasn’t such a major transition, he notes, because the internal structure of a database is similar to that of the 3-D grid he uses to make sculptures: “I am at home in the cubic lattice space.”

Another inspiration is M.C. Escher, a fellow Dutchman who devised eye-fooling compositions that depict impossible perspectives and seemingly infinite sequences. Bakker was introduced to this tricky work by Verhoeff, who sometimes advised Escher on mathematical issues.

Although Bakker’s forms are initially drawn with a computer program he coded, they don’t all stay virtual. About a dozen designs annually are sent as digital files to a foundry that translates them into bronze or steel. Indeed, the current virtual show began as an actual one scheduled for New York’s National Museum of Mathematics.

When the pandemic scrubbed that, Bakker and the museum, his partner in presenting this exhibition, turned to augmented reality. Initially, the sculptures used geolocation, which meant that viewers had to be within 150 feet of the site to see the object positioned virtually there. But most of the D.C. places Bakker selected became inoperable, since they were near the White House in an area that’s currently fenced-off.

The divisive political climate that led to the erection of those barriers makes Bakker’s sculptures timely. He sees his work as a metaphor for how to understand information — and by extension life. “I like to have structures that are really different depending on how you look at them,” he says. “I encourage people to look at things from all sides.”

Bakker hasn’t decided how long he’ll keep the sculptures’s geolocation switched to “off.” The twists, loops and knots appear more substantial, and just more interesting, when they seem to be anchored to a particular place — and thus in dialogue with monuments made of stone and metal instead of pixels.

A virtual sculpture park is still a park, an environment where the natural landscape frames and contrasts the man-made art, and a fine spot for a socially distanced stroll. Rather than ponder his elegant 3-D mathematical models at home, Bakker says, “I hope that people will still say, ‘Let’s go out to a beautiful place.’”