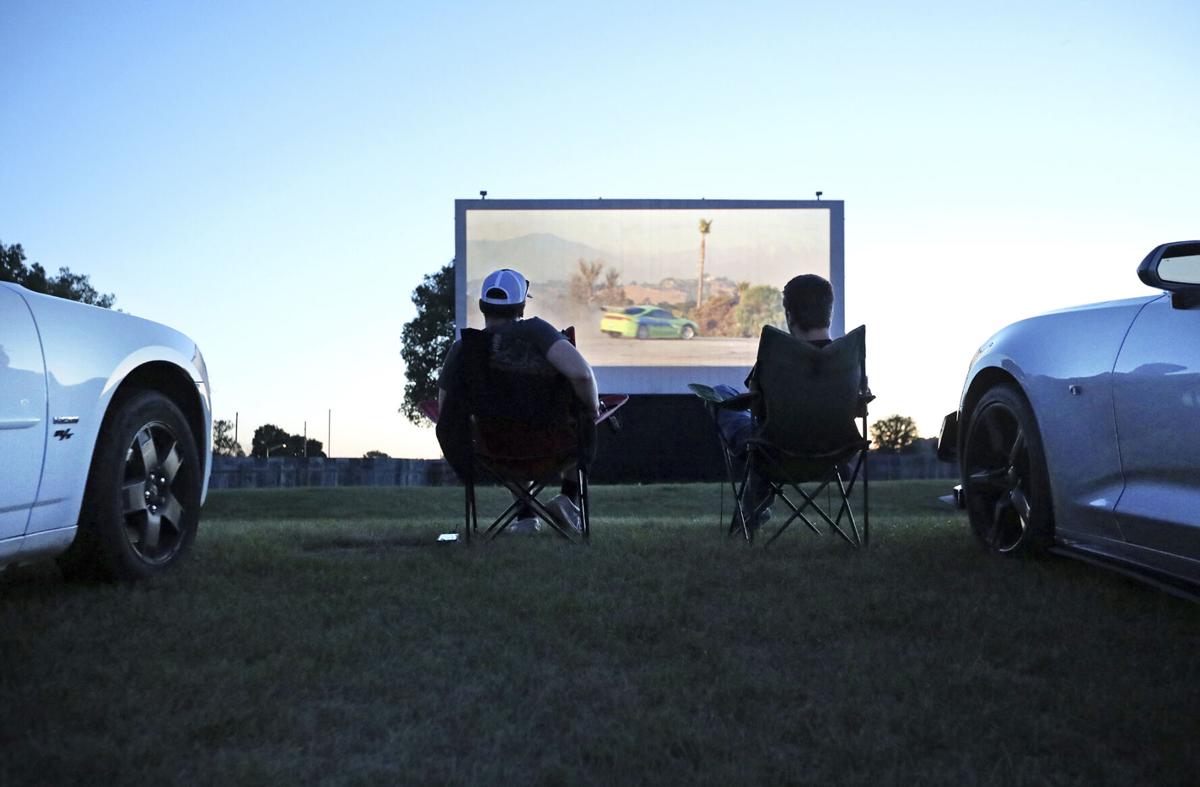 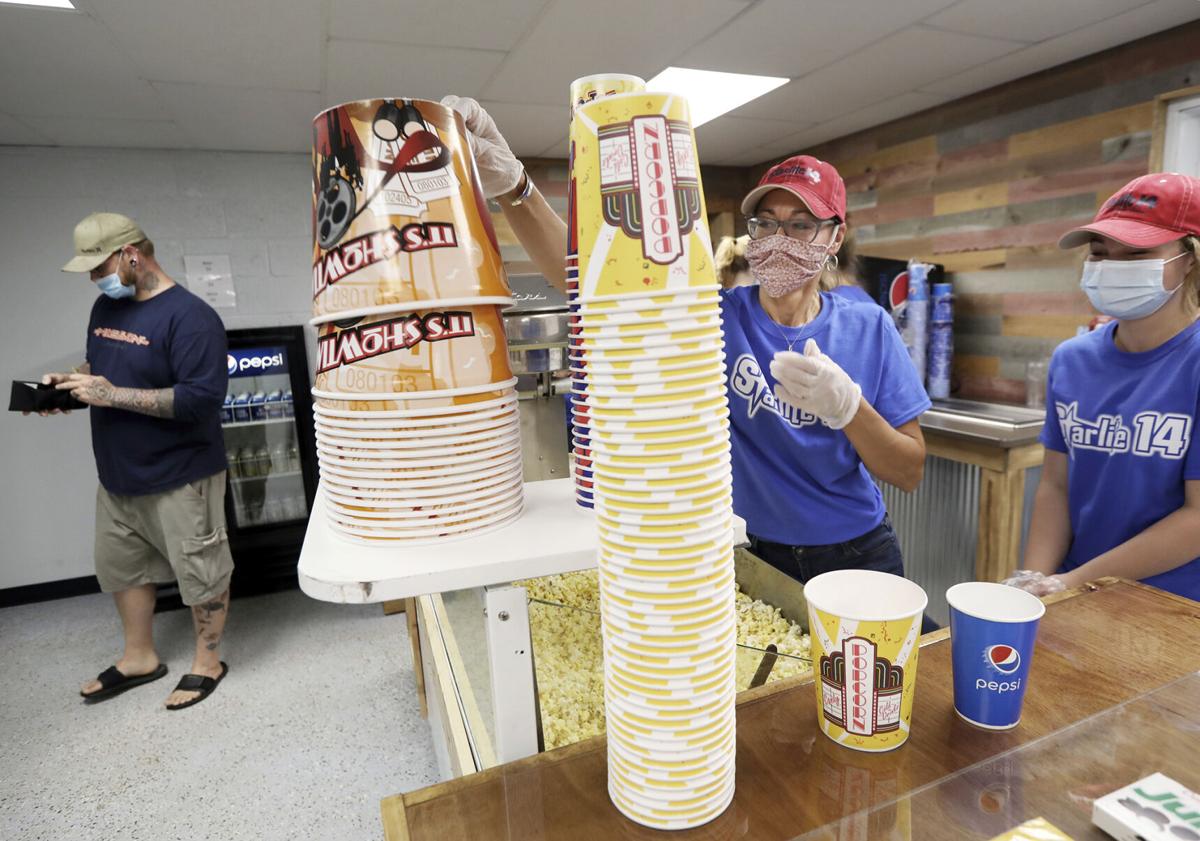 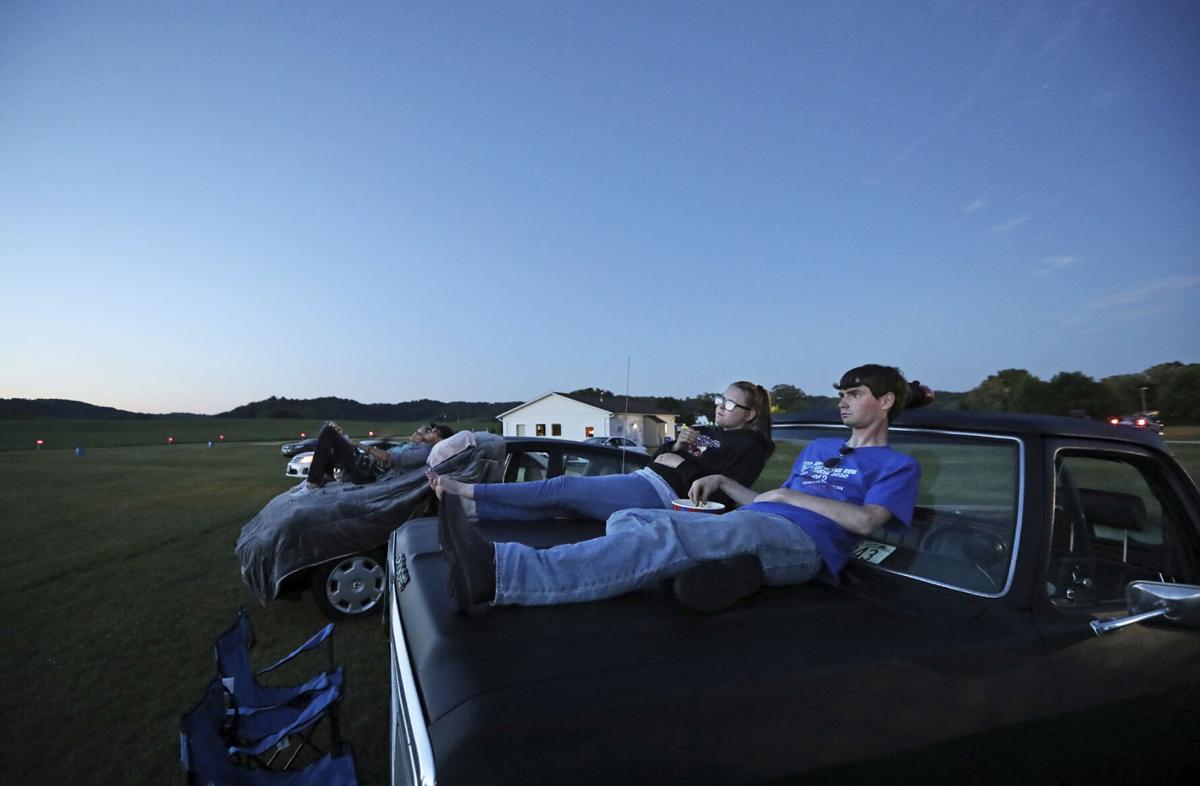 Ethan and Seirra McCracken, of Edmund, watch “Fast & Furious” while sitting on the hood of their truck July 10 at Starlite 14 drive-in theater in Richland Center, Wis. 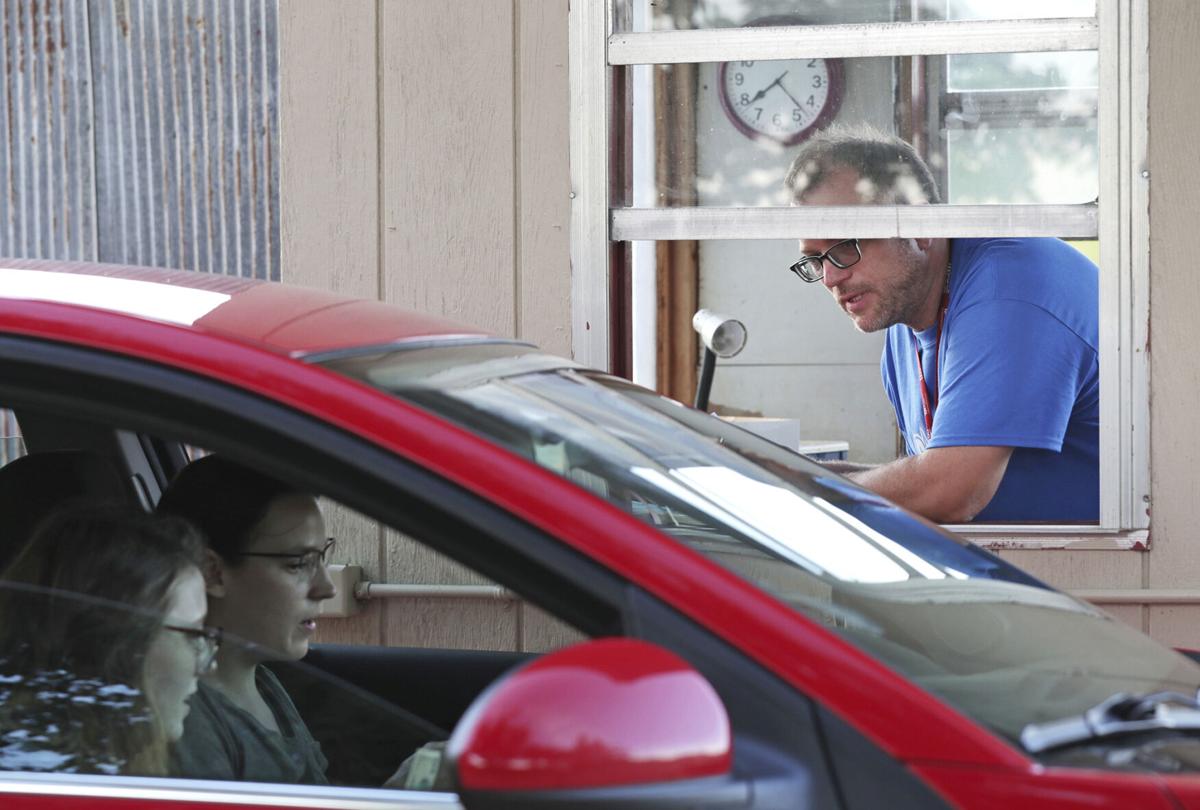 Ethan and Seirra McCracken, of Edmund, watch “Fast & Furious” while sitting on the hood of their truck July 10 at Starlite 14 drive-in theater in Richland Center, Wis.

RICHLAND CENTER, Wis. — The marquee has been refreshed, a stage has been installed for special events, and the concession stand has undergone a $40,000 remodel and deep clean.

The parking configuration is also improved at the Starlite 14 Drive-In after the removal of the 4-foot-tall metal poles and speakers. They’ve been inoperable for years, and customers now use their FM radios to hear the sound from the movies projected onto the 60-foot-wide and 38-foot-tall screen that has been a Richland County staple since 1953.

For Brent Montry and Holly and Tony Johnson, the timing had little to do with the fallout from the pandemic. Instead, they made the decision in early March, prior to the shutdown, to buy the drive-in last month from longtime owners Bill and Lisa Muth as a way to preserve one of the few outdoor theaters in the state.

“We didn’t go into it with expectations to turn it into a money-making career for us because we all have a way of making a living beyond this,” Montry told the Wisconsin State Journal. “Our intent was to save it.”

But instead of a recently released blockbuster to celebrate the outdoor theater’s grand reopening on a recent Friday, the first feature was “The Fast and the Furious,” a Vin Diesel action thriller that debuted in 2001. The second show of the night was “Furious 7.” It came out in 2015.

The crowd on this night was fairly light with about 15 vehicles and 45 to 50 customers. Mosquitoes were tolerable, the stars above and the fluttering lightning bugs prolific, and the weather near perfect. The smell of deep-fried onion rings, french fries and cheese curds wafted from the concession stand.

Kayla Schug, 33, came from Viola with her husband and three children. They set up camp in the bed of their Ford F-150 that was parked backwards toward the rear of the lot. Their nearest neighbor was yards away.

“We’re trying to quarantine the best that we possibly can and this is pretty amazing for kids activity-wise,” said Schug, a healthcare worker. “We’re pretty excited. You don’t really see things like this anymore.”

COVID-19 may have shut down Hollywood, but outdoor theaters around the country are providing a natural, socially distanced entertainment option in the midst of a summer inundated with canceled fairs, festivals and concerts, shuttered indoor theaters and no first-run movies.

New releases aren’t expected for weeks, so Wisconsin’s nine outdoor theaters are filling their screens with throwbacks like “Sixteen Candles,” “Uncle Buck,” “Grease” and “Shrek.” At the Hi-Way 18 Outdoor Theatre just west of Jefferson, vehicles park in every other space, masks are required in the bathroom and social distancing is required at the concession stand. “American Graffiti” and “Animal House” were that weekend’s features, while the Big Sky Twin in Wisconsin Dells was showing “Aquaman,” “Jumanji: The Next Level,” “Bloodshot” and “Shazam!”

At the Twilight Drive-In in Chilton, located about 35 miles south of Green Bay, sales are up 75% over last year, according to owner Mike Radue, who opened the theater in a former Walmart parking lot in 2012. Instead of 200 vehicles per show, Radue is allowing only 100 at a time, and the mini-golf course and video arcade are closed. The concession stand remains open and includes homemade pizza that can be ordered via text message. Last week’s movies included “Jaws” and “E.T.,” while this weekend’s offerings were “Inside Out” and “The Empire Strikes Back.”

Radue has added live music before some movies and, like many other outdoor theaters, has a contract with Encore Live to show pre-recorded concerts like the Garth Books show on June 27 and the just-announced concert for July 25 featuring Blake Shelton, Gwen Stefani and Trace Adkins. Radue is hopeful that added exposure to outdoor movie theaters could be a positive for the industry in the long run.

“I think the outdoors will make a big comeback,” Radue said. “I think this is going to change the thought process for a lot of people.”

Radue also has three indoor theaters but business has been slow. He’s limiting his auditoriums to just a third of their capacity but has yet to hit that threshold for any show.

In Monroe, the Goetz family opened the indoor theater in 1931 with 1,000 seats but over the years converted the space to three auditoriums. Those theaters, located on the city square, remain closed and likely won’t reopen until new movies are released, said Duke Goetz, whose grandfather and great uncle founded the family business. The Sky-Vu Drive-In opened in 1954 along Highway 69 just south of the city and is helping to keep the overall business afloat, even though sales are down by 40% over last year.

“We’re obviously taking a pretty big hit,” Goetz said. “I never anticipated something going this wrong. This was never anticipated, but we’re OK. The drive-in is covering a lot of the costs for things like taxes and insurance.”

The Sky-Vu can hold more than 300 vehicles, but concession sales are down 20%. Trash cans have been removed to limit exposure to his employees, and customers are asked to take their trash home. They’ve come from throughout southern Wisconsin, northern Illinois and beyond.

“Drive-ins are a unique breed,” said Goetz, who mans the ticket booth each night. “I have so many new people I’ve never seen before and some have been back. I think the drive-ins will continue to be strong.”

According to the United Drive-In Theatre Association, the U.S., as of October, was home to 305 outdoor movie facilities with a combined 559 screens. That compares to 447 sites and 684 screens in 1999.

At the Starlite, movies are only part of the equation in an effort to continue its long legacy and maximize revenues.

A car show was held on the grounds on a recent Saturday, a live Ultimate Fighting Championship event will be streamed next month, and the facility will also be used for private parties, business functions and another 11 concerts from Encore Live. Instead of closing on Labor Day Weekend, the drive-in will be open through October, with a Christmas tree lot near the entrance opening a few weeks later.

“I actually think our timing is perfect,” Holly Johnson said, referring to the purchase. “Not everybody is willing to gather inside for movies. Now is the perfect time for (the Starlite) to flourish and it will give us a chance to do the renovations we need to do at the indoor so we can be ready for the public to enjoy the indoor theaters again.”

Johnson and her husband live in the town of Orion south of Richland Center and met Montry when he took a dance class for dads at Holly Johnson’s Dance Elite studio, where his daughter was taking a class. The trio began talking about buying the outdoor theater and the indoor Center Cinema downtown while sitting around a pool at Disney World over spring break. The theaters came as a package, but the outdoor theater did not include the land. It is leased but would have reverted back to farmland had the Starlite closed for a year or more.

“It’s pretty entertaining. Most of us aren’t that coordinated,” Montry, who owns a basement repair business, said of his dancing. “It kind of turned out to be an expensive group to belong to.”

The last two weeks of June were spent remodeling the concession stand and building a stage under the outdoor screen. They finished just in time to host an outdoor recital on June 26 and 27 for Johnson’s students who dance at her studios in Richland Center, Fennimore and Prairie du Chien. Over 1,000 people attended the recitals, normally held indoors but pushed outside due to COVID-19. The drive-in showed the Garth Brooks concert that weekend and its first movie of the season on July 3.

Bill Muth purchased the indoor cinemas and Starlite in 1988. After he put the business up for sale in October for $180,000, there were 23 people interested in the property, some from out of state. He’s grateful that the business will remain locally owned by the Johnsons and Montry.

“They understand the people around here and they know the community,” said Muth, who is helping out during the transition. “I was real comfortable with selling to these guys. They’ll do a good job.”

On that Friday night, employees wore masks, there was a separate entrance and exit for the concession stand, and signs encouraging social distancing.

Seirra and Ethan McCracken made the 35-mile drive from their home in Edmund, in rural Iowa County. The couple, married just two weeks, sat on the hood of their 1990 Dodge D150 pickup, using the windshield as a backrest. For Sierra, 21, it was her first outdoor movie.

“In a movie theater you’re kind of like all scrunched in and stuff,” said Sierra, who has been with Ethan, 23, for four years. “Here, you get to enjoy the weather and the movie and the stars and everything all in one.”