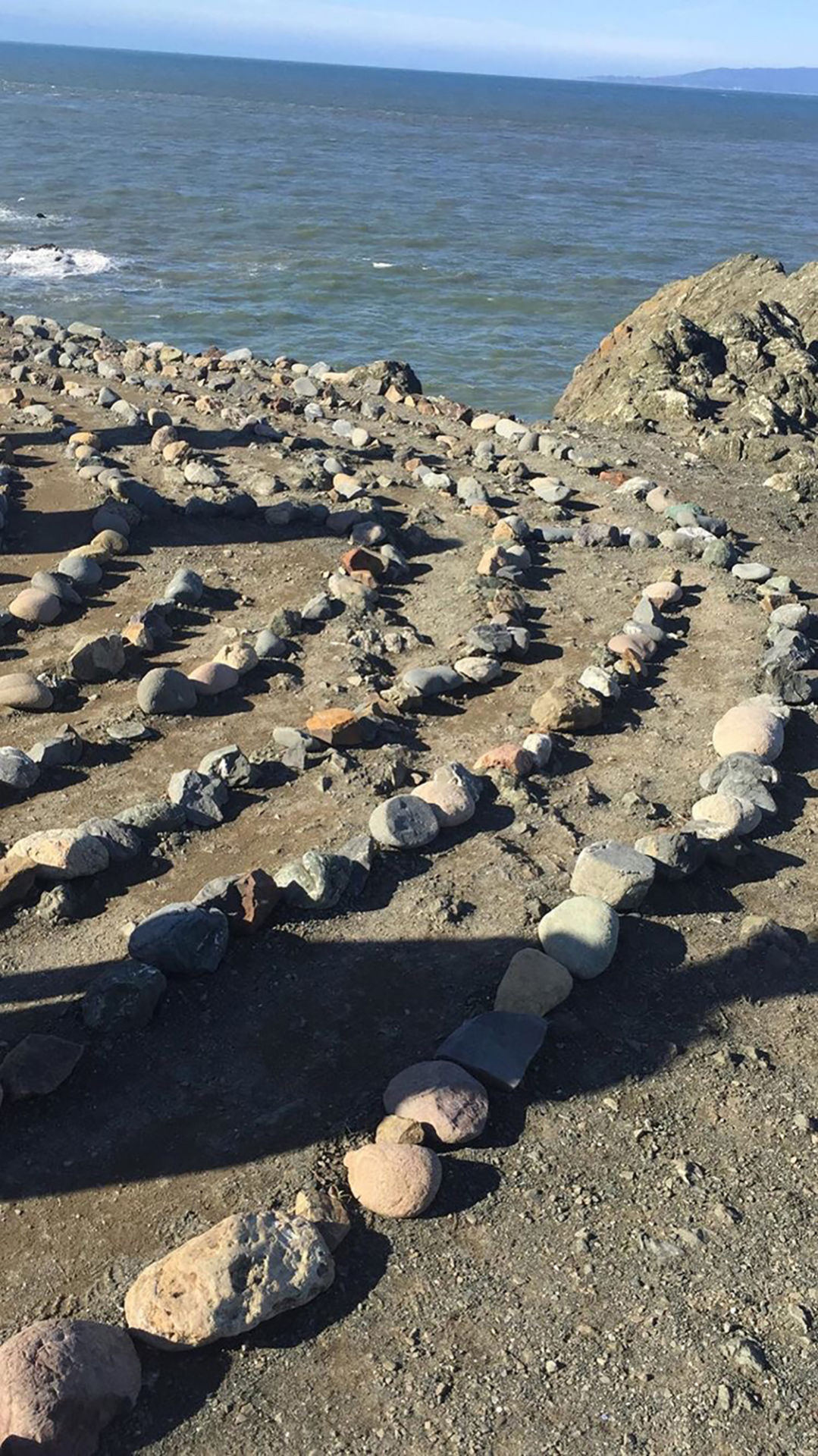 The labyrinth at Lands End, create by Bay Area artist Eduardo Aguilera, has been rebuilt by volunteers several times over the years. MUST CREDIT: Washington Post photo by Helen Carefoot. 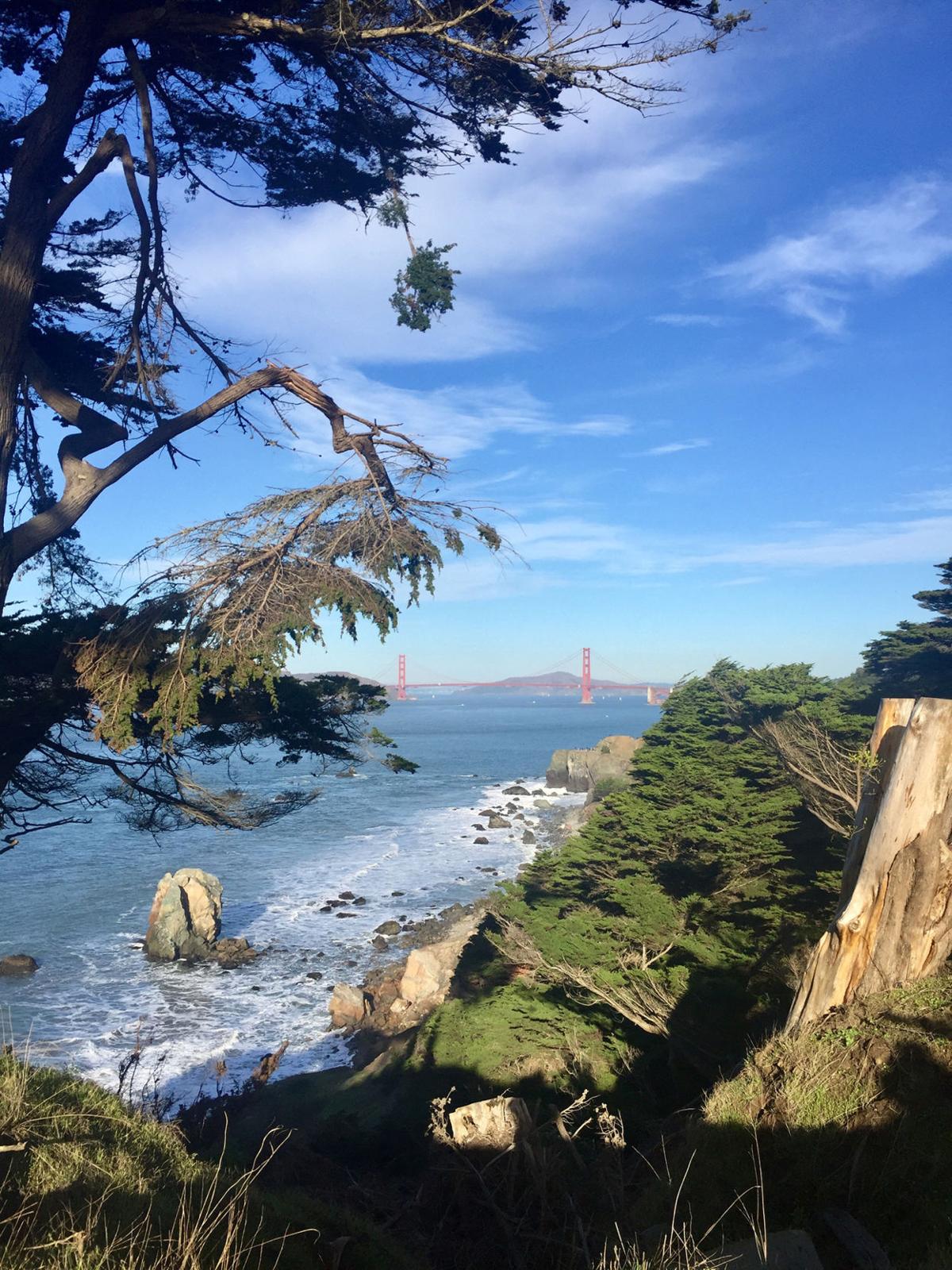 The Coastal Trail carves a path along cliff edges and through forests and beaches, offering numerous unobstructed views of the Golden Gate Bridge. 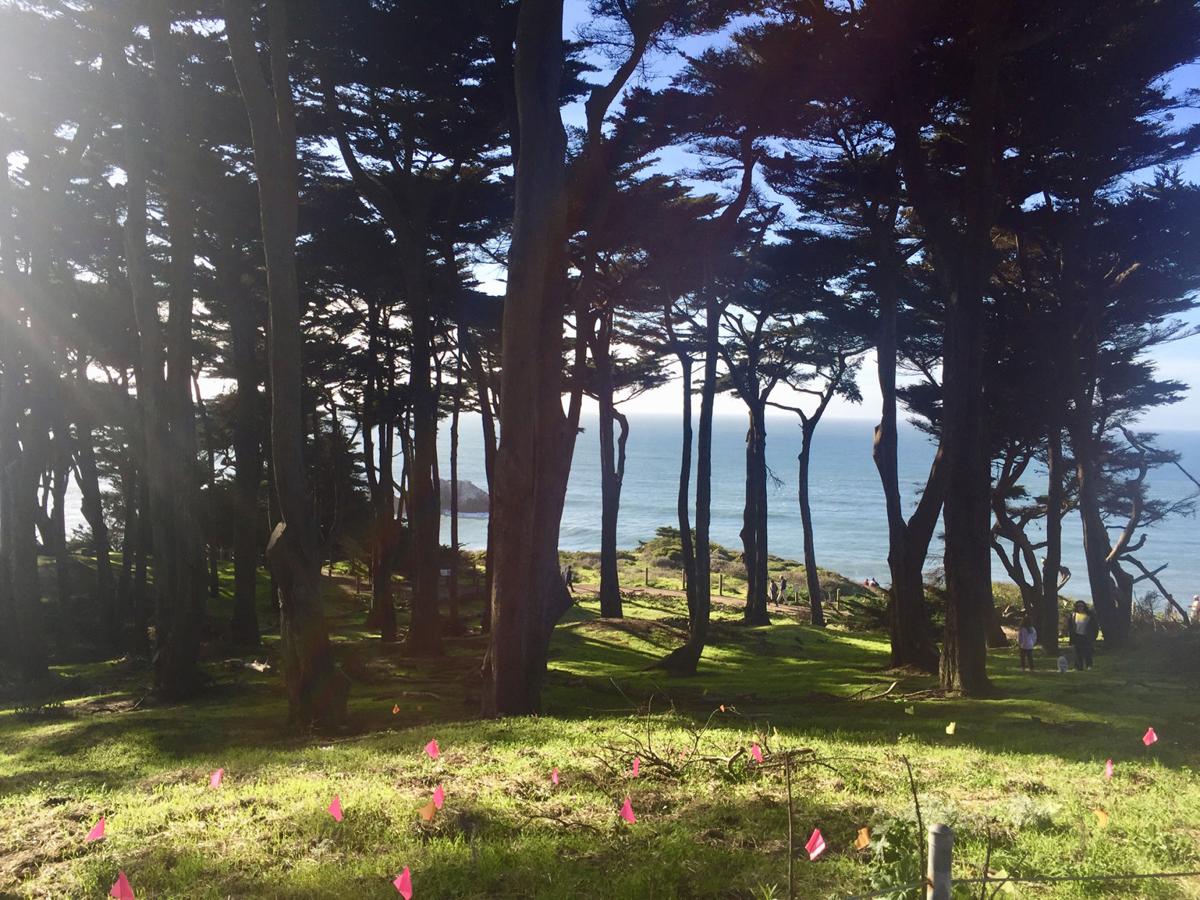 Hikers are never far from the ocean on the Coastal Trail, which is bordered by cypress and eucalyptus trees. The 1.7-mile route follows the path of a railroad that operated there in the 1880s. 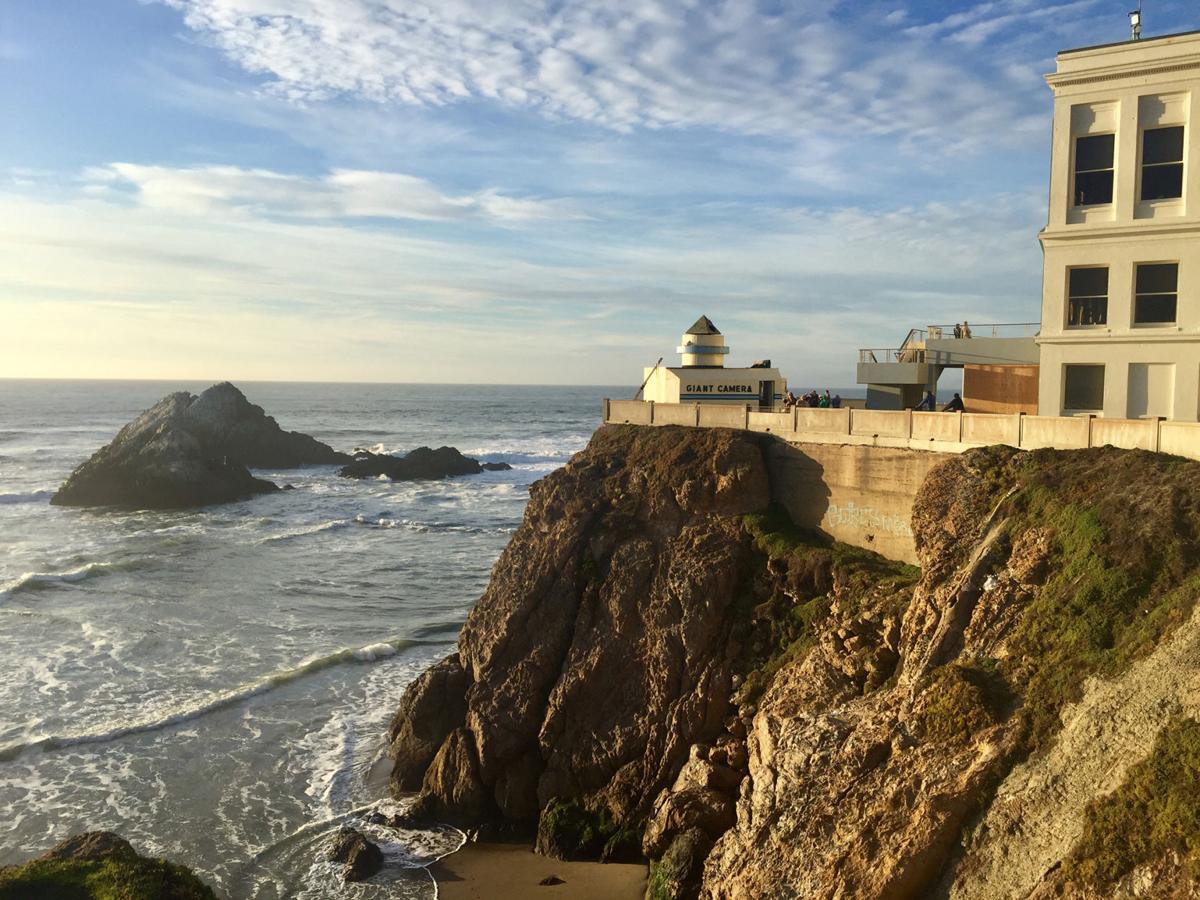 The Cliff House, right, a 157-year-old restaurant, overlooks Seal Rocks, and the Giant Camera Obscura, center, a pinhole camera built in 1946, are right off Ocean Beach.

The labyrinth at Lands End, create by Bay Area artist Eduardo Aguilera, has been rebuilt by volunteers several times over the years. MUST CREDIT: Washington Post photo by Helen Carefoot.

The Coastal Trail carves a path along cliff edges and through forests and beaches, offering numerous unobstructed views of the Golden Gate Bridge.

Hikers are never far from the ocean on the Coastal Trail, which is bordered by cypress and eucalyptus trees. The 1.7-mile route follows the path of a railroad that operated there in the 1880s.

The Cliff House, right, a 157-year-old restaurant, overlooks Seal Rocks, and the Giant Camera Obscura, center, a pinhole camera built in 1946, are right off Ocean Beach.

I savor every second I’m home in the Bay Area. I disconnect from my hectic life in Washington and trade it for uninterrupted time with family and friends, enormous $1 avocados at the farmers market, and as many hikes and beach trips as possible. I was due for a visit to Lands End, the rugged oceanside park within the Golden Gate National Recreation Area, the 82,027-acre expanse that includes many of the Bay Area’s most jaw-dropping landmarks and vistas. Exercise, trees and ocean views sounded like the perfect antidote to the East Coast winter. I was in dire need of some vitamin sea.

Hugging San Francisco’s northwest shore, Lands End offers an unobstructed view of the iconic structure that draws so many visitors from around the world — the Golden Gate Bridge. And seeing it here doesn’t require elbowing your way through the crowds at Baker Beach or Fort Point. The site’s trails weave through the forests and beaches that abut the steep cliffs and sharp rocks that form a natural “gate” for the ships that sail into San Francisco Bay. Hiking here is a way to feel a little wild again, even in the quintessential 21st-century city.

After a late and leisurely breakfast at home, my mom, my younger brother, Erhan, and I set off toward San Francisco on Interstate 280. Erhan deejayed as we wound through the South Bay’s green foothills and cypress forests until Ocean Beach unfurled before us, a shimmering canvas of blue water and pale sand dotted with joggers. Lands End is usually less crowded than some of the other local spots, but on this sunny but brisk Saturday, the main parking lot was full. Erhan, a regular here, maneuvered us to another one around the corner past the Lands End Lookout, the beginning of the park that includes restrooms, a cafe, visitor center and bookstore.

We decided to follow the Coastal Trail, an easy 1.7-mile route that follows the railbed of the railroad that operated here in the 1880s and takes visitors through tunnels of trees and past scenic outlooks. It’s not a strenuous hike, but we had dressed in running attire to contend with the rocky and uneven parts of the path (the area has experienced landslides). We paused at Point Lobos, named for the sea lions, orlobos marinos, that sometimes sun themselves on the rocks below — though, sadly, not today.

From the trailhead, we looked down at children and parents peering into a large concrete pool on the shore. It’s the ruins of the Sutro Baths, a public swimming pool and entertainment complex that was the crown jewel of this neighborhood when it opened in 1894. Named for its developer, Adolph Sutro, a gold-rush-era millionaire who later became mayor of San Francisco, the baths were once a playground for city dwellers. Sutro died in 1898, and while his family continued to manage the complex until it was sold in 1952, the Great Depression and tighter health restrictions had caused the baths’ popularity to dip. The complex closed permanently in 1965 and was destroyed by a fire the next year. Now all that remains are the steel beams and concrete blocks.

It’s not hard to learn something at Lands End, as signage along the route provides interesting facts about the area’s history and ecology. The baths’ colorful history is a case in point.

We cut back across the cliff top and proceeded north to the trail. As we wound into the cliffs and further away from the parking lot below, the loud waves drowned out the sound of cars and the only reminders of the world outside were the smartphones in other hikers’ hands.

The main path is wide and well trod; because several people have died falling from the cliffs over the years, numerous signs urge hikers to stay on marked trails. Glimpses of the bridge were visible as we walked under a dark green canopy of cypress and eucalyptus trees. We paused at the Eastern Coastal Trail Overlook, where other hikers and dogs were resting, to take in our first expansive view of the bridge — a reward after so many quick glimpses. A smaller trail beckoned; about 200 steps below us was Mile Rock Beach, a little cove strewn with logs and stacked boulders with a beachfront view of the bridge from below.

From the primary trail, we headed to the site that populates the Instagram feeds of so many Bay Area teens — the stone labyrinth created by San Francisco artist Eduardo Aguilera. The maze crowns a large cliffside clearing with a panoramic view of the bridge. Getting there is more strenuous than the rest of the trail and requires walking on narrow paths and descending numerous steps. The labyrinth, which has been repeatedly vandalized and was destroyed twice over the years, was rebuilt with the help of volunteers. The design looks as if it’s carved into the earth, and its setting at cliff’s edge is a beautiful but uneasy reminder of how jagged and high these bluffs are.

After a workout climbing the stairs, we returned to the forested portion of the trail and took more pictures through the trees. The last leg of the trail starts in a eucalyptus grove and becomes grassy and filled with wildflowers; signage names the native plants that surround us — coyote brush, sticky monkey flower, seaside daisy and toyon. Small yellow flowers look like drops of paint spilled on a green canvas composed of wild, linear strokes. At Eagle’s Point, the lookout closest to the bridge, we join some people eating sandwiches from Ike’s — a local mainstay — on a long bench. This was the closest we got to the urban cityscape (the trail runs into the ritzy Sea Cliff neighborhood), but it still felt far away. Taking in the view, we decided not to continue on to China Beach and instead returned the way we came.

Before we headed back to the car, we walked to Ocean Beach to savor the view from Cliff House, the aptly named restaurant overlooking Seal Rocks. The 157-year-old restaurant has survived numerous iterations over the years, as well as two fires and the 1906 earthquake. The best views inside are at the Bistro, the casual walk-in portion of the restaurant, which includes a historic zinc-topped bar and floor-to-ceiling windows facing the beach. We walked behind the building to the observation deck and were rewarded with a stunning view. Alone on the deck, the three of us looked out on the blue expanse and I felt my last bits of stress wash away with the tide. It’s a reminder to stand still. I’m thankful the sun and the waves put on a show for me the day before I left.

Being near the ocean lulled me into sleep, and I rested easy on the drive home. On my red-eye flight back to Washington the next evening, I could still feel the wind whipping my hair and the California sun kissing my cheeks.- — -

Bistro at the Cliff House

This historic bar and restaurant with enormous windows and expansive ocean views has gone through numerous iterations and is at this point part of the rugged San Francisco headland it sits on. Sit down for a meal in the window-lined Bistro or cap off your hike with briny, salty calamari and a cocktail such as the Strawberry Pink Pepper Lemonade at the Zinc Bar. Open daily 9 a.m. to 9:30 p.m. Appetizers from $4.95; glass of wine from $8.50; cocktails from $10.50.

An oceanside park that runs along the edge of the city and offers unbeatable views of the Golden Gate Bridge, access to beaches, native plants and multiple historical sites such as the Sutro Baths and USS San Francisco Memorial. Trails range from easy to moderate. Download a printable map to plan your itinerary and a guidebook for more information about the route’s history. Parts of the path are paved, but there are many stairs and some rocky terrain, especially down to Mile Rock Beach and the labyrinth, so wear comfortable walking shoes. Lands End Lookout Visitor Center open daily 9 a.m. to 5 p.m. Free.

Tucked behind the Cliff House, this pinhole camera was built in 1946. Based on a design by Leonardo da Vinci, the camera obscura uses sunlight and mirrors to project 360-degree views of the surrounding beaches. Open daily when weather permits 11 a.m. to 5 p.m. General admission: adults $3, seniors and children 12 and under $2; cash only.