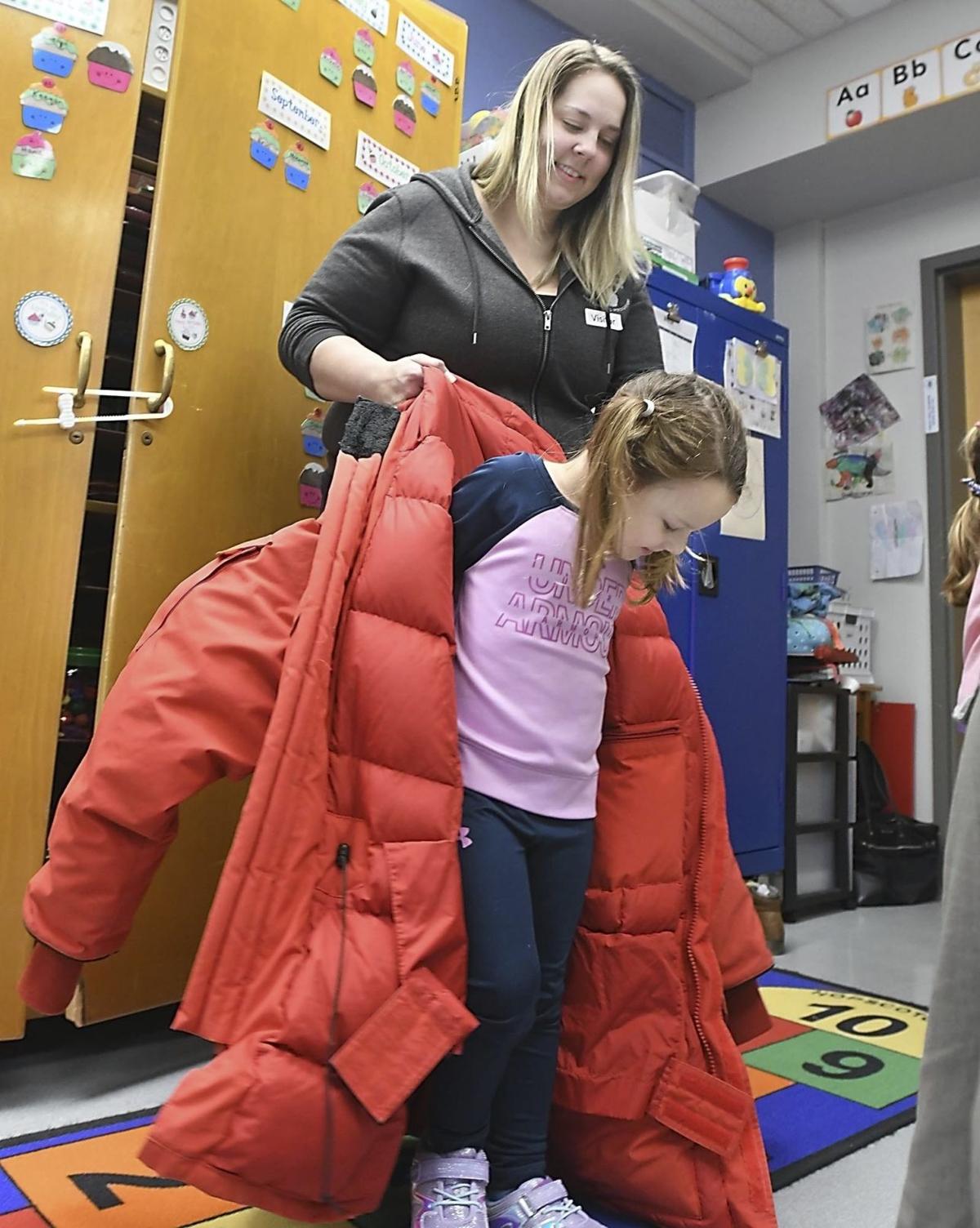 Antarctic dispatcher Kris Sack helps St. Peter preschooler Brianna Tish try on a coat similar to the one she wore in Antarctica during a presentation March 10 before the COVID-19 outbreak in St. Peter, Minn. 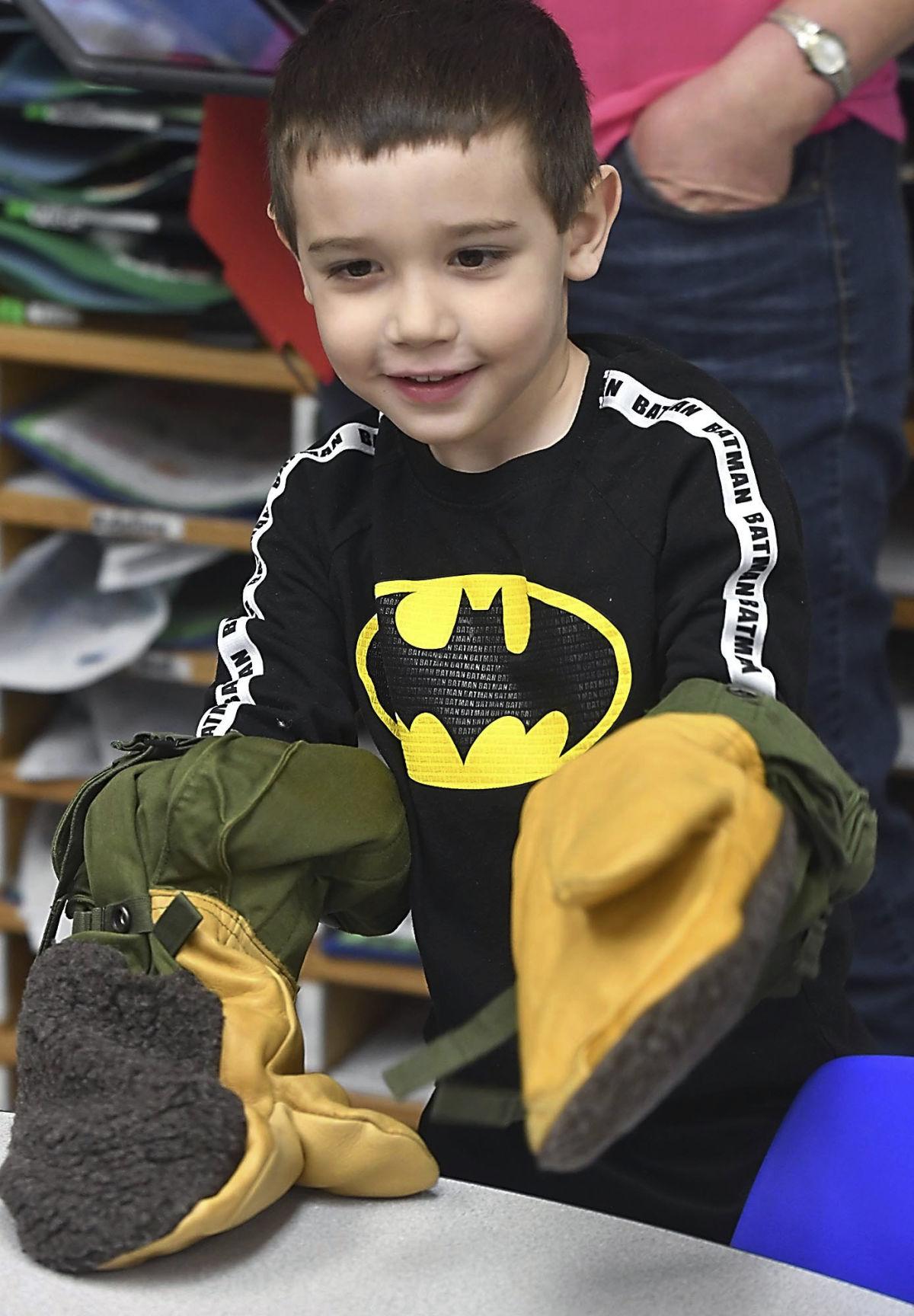 St. Peter preschooler Logan Midthun tries on gloves typically worn by McMurdo Station researchers during a classroom presentation March 10 before the COVID-19 outbreak in St. Peter, Minn. Native Kris Sack, who works seasonally as a dispatcher at the station on Antarctica, brought them along.

Antarctic dispatcher Kris Sack helps St. Peter preschooler Brianna Tish try on a coat similar to the one she wore in Antarctica during a presentation March 10 before the COVID-19 outbreak in St. Peter, Minn.

St. Peter preschooler Logan Midthun tries on gloves typically worn by McMurdo Station researchers during a classroom presentation March 10 before the COVID-19 outbreak in St. Peter, Minn. Native Kris Sack, who works seasonally as a dispatcher at the station on Antarctica, brought them along.

MANKATO, Minn. (AP) — When their daughter announced last year she’d be leaving soon for a job at a remote base on Antarctica, Cheryl Guentzel and Ken Gansen of St. Peter weren’t too surprised.

“It’s in her nature,” Gansen said about 33-year-old Kris Sack’s personality that led to a three-month stint on the icy continent.

“I’ve seen her bucket list,” Guentzel said, then mentioned a few accomplishments from the more than 100 adventures Sack’s promised herself.

“Kris drove a truck ... and she taught in Japan — straight out of high school,” Guentzel said.

“This isn’t her first foray into the cold,” Gansen said.

Sack was working at Seward, Alaska, in 2010 when she first set her sights on working at research stations on the opposite side of the world, the Mankato Free Press reported.

“I kept trying for 10 years until I was accepted,” she said about her job as a radio dispatcher at an Antarctic research hub about 850 miles north of the South Pole.

“I’m from Minnesota, mostly I wore fleece and flip-flops,” she said, describing her workplace attire.

She spent September through February working at McMurdo Station on the southern tip of Ross Island. She was hired by a contractor to handle typical 911 calls — medical, fires, domestics.

Her previous experience as a dispatcher for the Nicollet County Sheriff’s Department was very useful at McMurdo.

Sack is thankful she did not have to deal with a major disaster while she was on duty in Antarctica where “every event has the potential to become more extreme.”

The research station’s remoteness from the rest of the world — flights take at least five hours to reach the nearest large community — Christchurch in New Zealand — means calls for help may quickly turn into serious emergency situations, Sack said.

Dispatchers are a vital part of the communication system on a continent without cellphone towers. Sack’s duties included passing on messages to scientists and assisting them with flight check-ins.

“We also keep track of researchers when they’d go out in the field.”

McMurdo is home to a variety of climate and geological research projects as well as wildlife studies.

About 90% of U.S. Antarctic Program participants — 130 to 200 in the winter and up to 1,000 in the summer — stay at the station. The government organization manages all U.S. scientific research and related logistics in Antarctica as well as aboard ships in the Southern Ocean.

When Sack returned to St. Peter in February for a mandated break all employees must take, she brought along loads of educational materials to use during classroom presentations.

USAP supplied her with free fact sheets about research, Antarctica and its wildlife, and a knapsack full of winter gear like that worn by the scientists at McMurdo.

Two researchers went “above and beyond” to help Sack understand the basics of their research so the projects can be described to schoolchildren. They also sent photos, videos and other materials to use during classroom presentations.

“If I was a kid, I would find those kinds of things really interesting,” said Sack, who had completed at least 13 presentations in a variety of classrooms in St. Peter and Nicollet before schools went to long-distance learning because of the coronavirus pandemic.

“Kris was able to describe her real life experiences by using language they could understand. For example, she used a tape measure to show the length of a seal,” said Erin Stueber who teaches preschoolers in St. Peter.

“At the end of her presentation, Kris let them try on some winter gear — and she offered to come back next year,” Stueber said.

Sack is scheduled to return to Antarctica this fall. In the meantime, she’s a management consultant for the St. Peter American Legion.

She’s also enjoying time with her husband. Being married to a person who’s curious to explore the world for a couple of months while you stay home in St. Peter has required some assistance from family and friends, James Sack said.

His in-laws have helped a lot with taking care of the couple’s two big dogs.

He’s got lots to keep busy with in St. Peter — his job, fishing, hunting and a new smokehouse. Traveling to Antarctica soon is not in his plans.

Some patience and a lack of wanting to change someone has been key to their sometimes long-distance marriage.

When Kris is back to work at McMurdo, the couple will communicate regularly despite the 10,000 miles between them. She’ll purchase minutes on phone cards so they can talk in real time.

“And we’ll be emailing when we have some downtime,” James said.

Besides family and friends in Minnesota, she’ll miss having access to fresh fruit and vegetables when she returns to Antarctica, Kris said.

She knows what she will and won’t need for her next stint.

“For my first trip, I took all kinds of clothes. That won’t be the case (this fall). I am going to download a lot more music and books to take with me.”