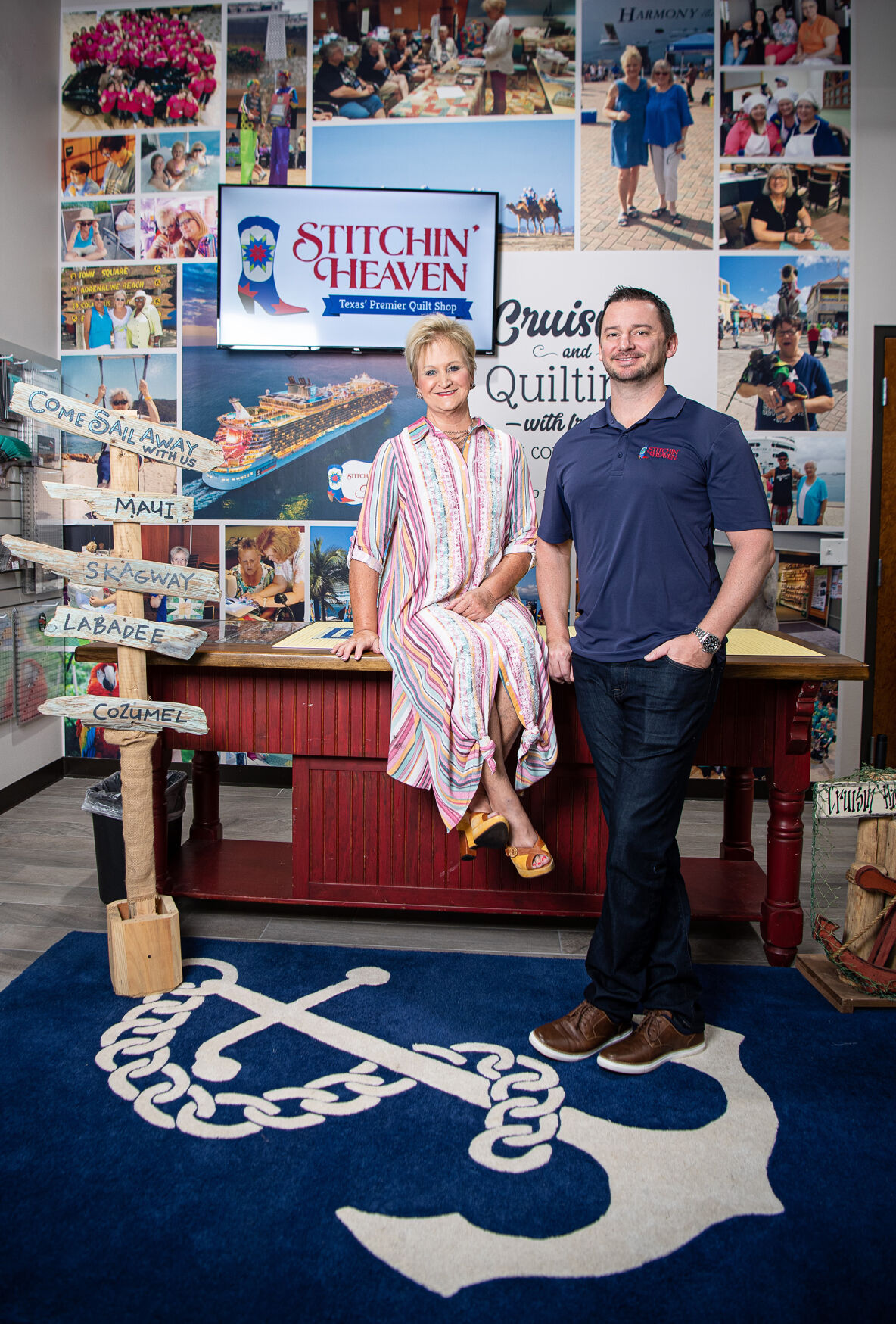 Stitchin’ Heaven owner Deb Luttrell is seen with her son, Clay Luttrell, who is also co-owner. 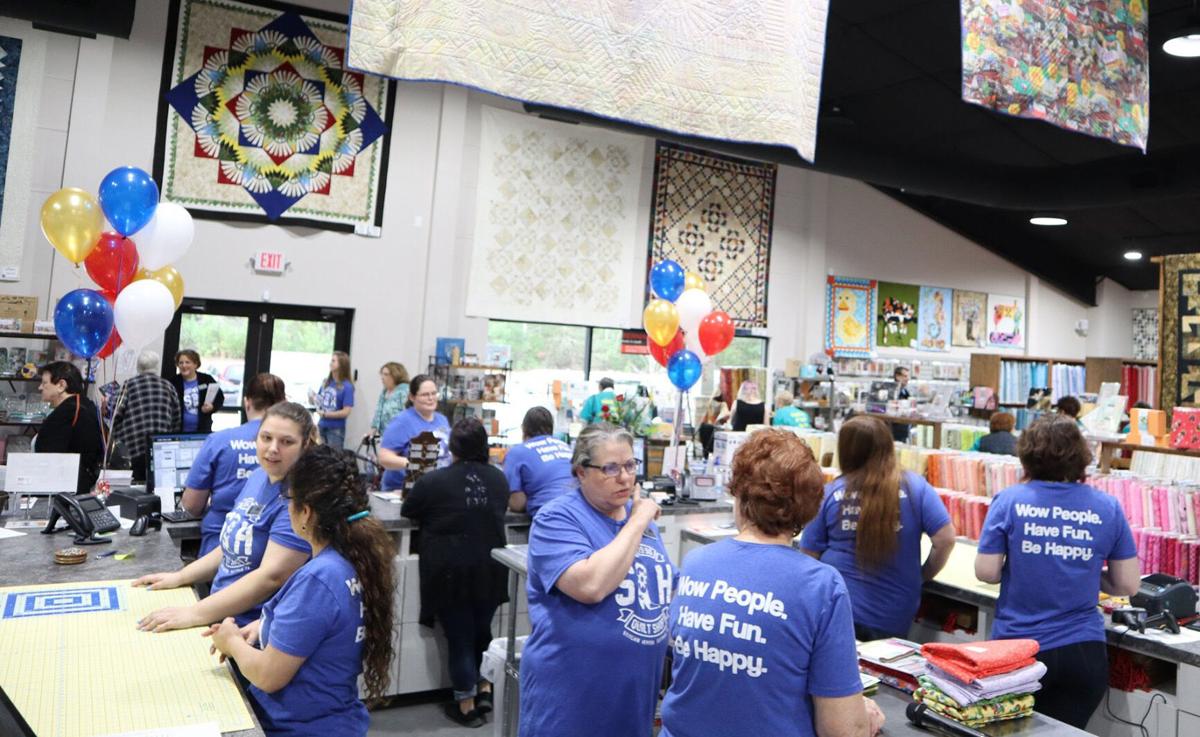 Customers talk inside Stitchin’ Heaven in Quitman, which opened in 1996 and has expanded. 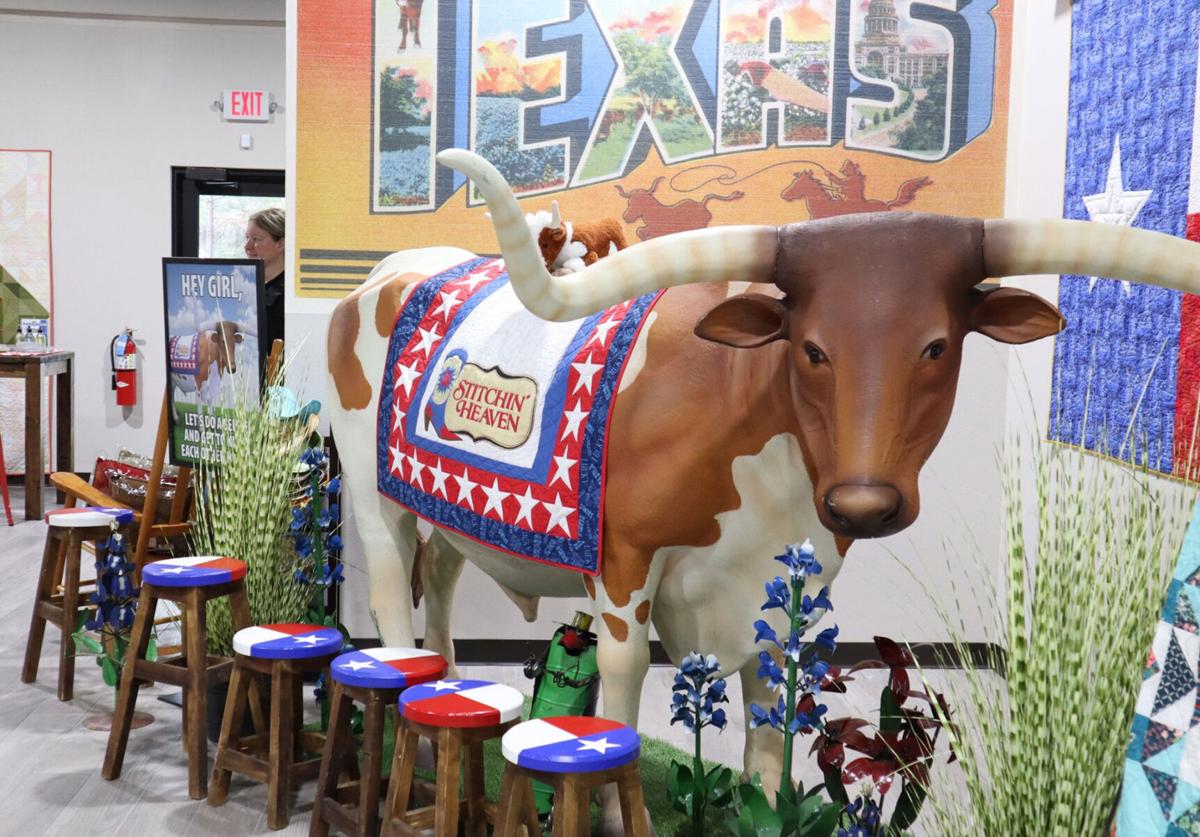 A model longhorn is seen inside Stitchin' Heaven in Quitman, which opened in 1996 and has expanded. 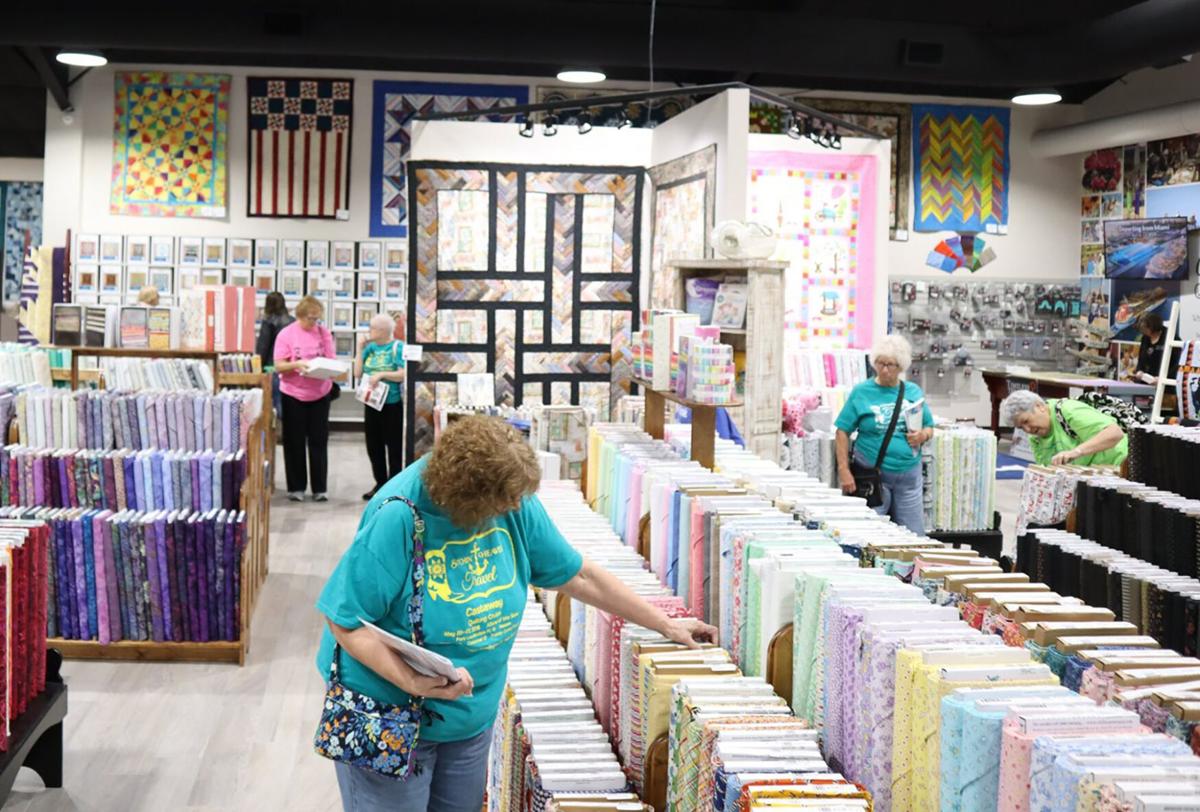 Customers browse inside Stitchin’ Heaven in Quitman, which opened in 1996 and has expanded. 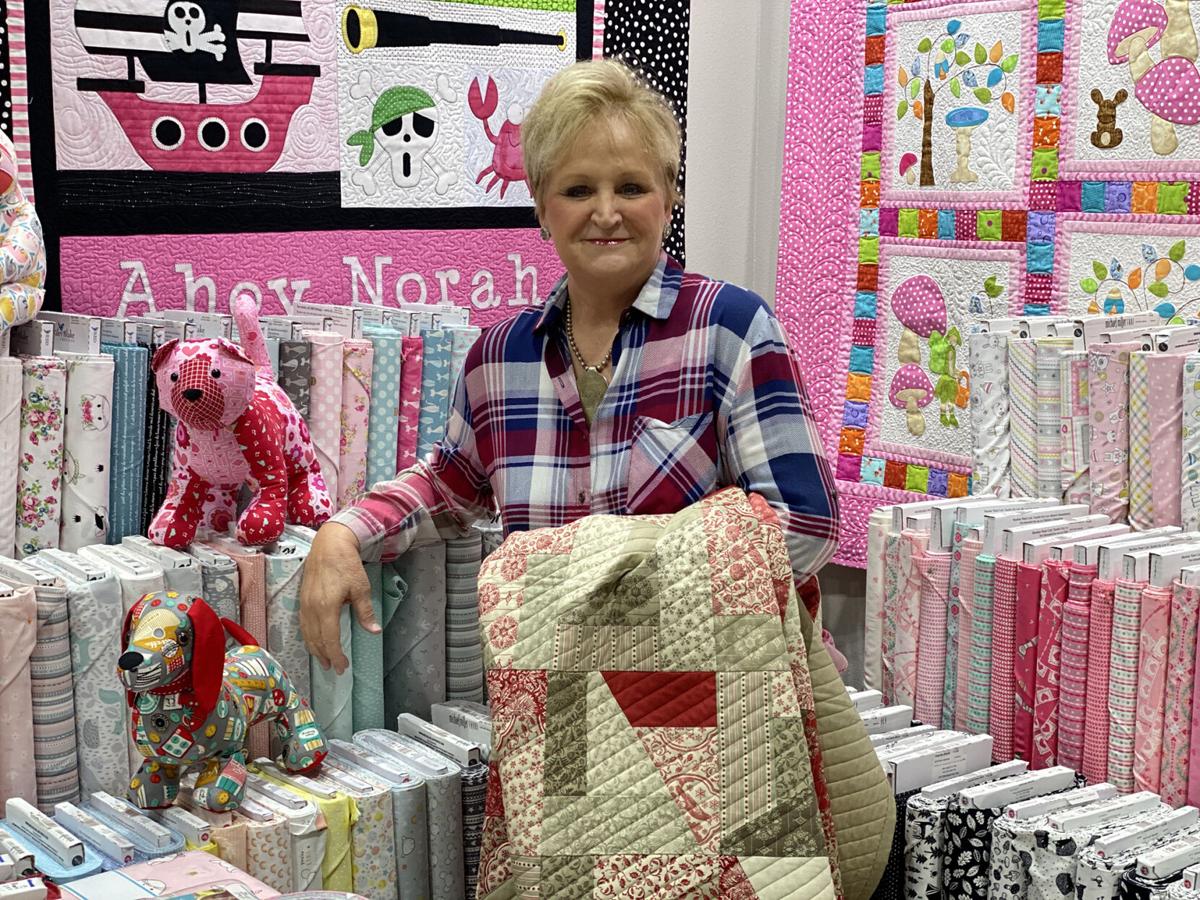 Deb Luttrell is surrounded by bolts of fabric inside Stitchin’ Heaven, which opened in 1996. 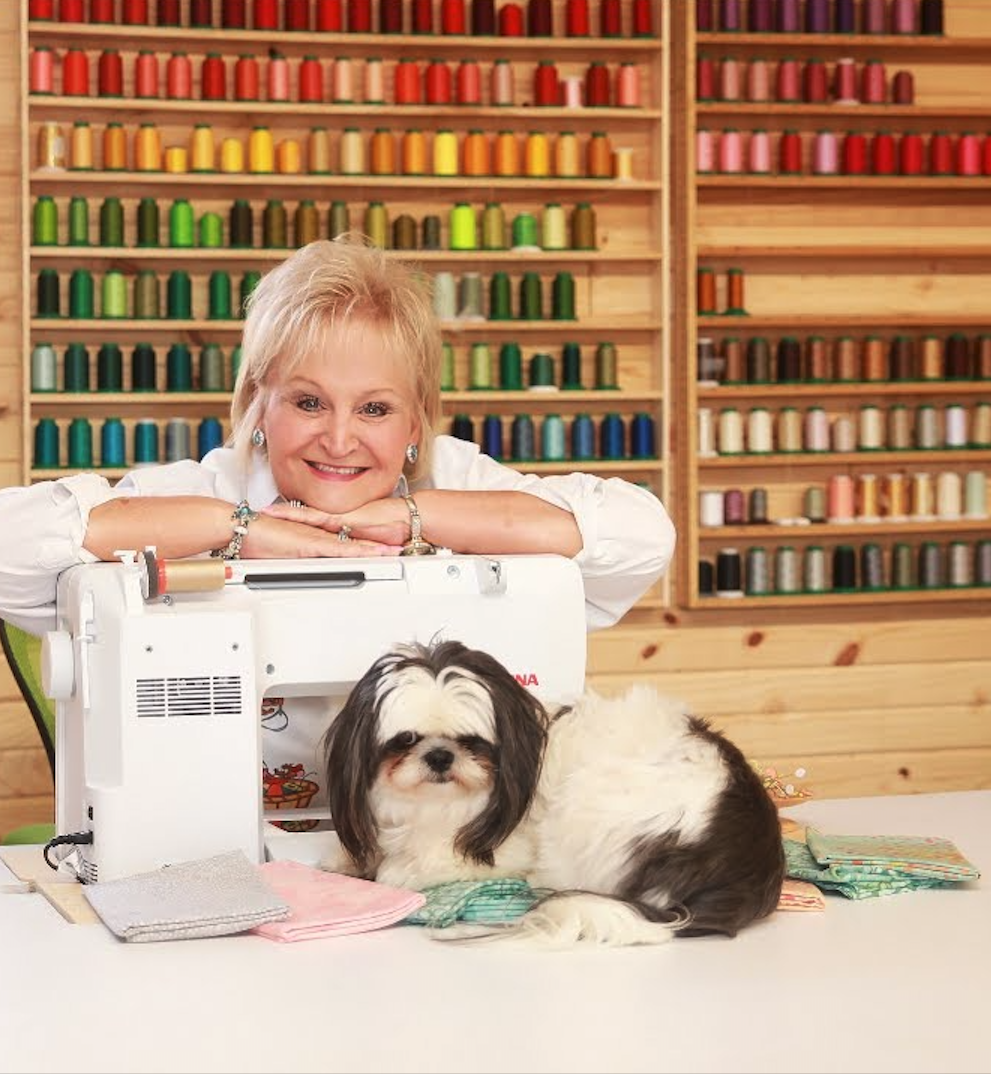 Deb Luttrell is shown with her dog, Jack. Luttrell opened Stitchin’ Heaven in Quitman in 1996. 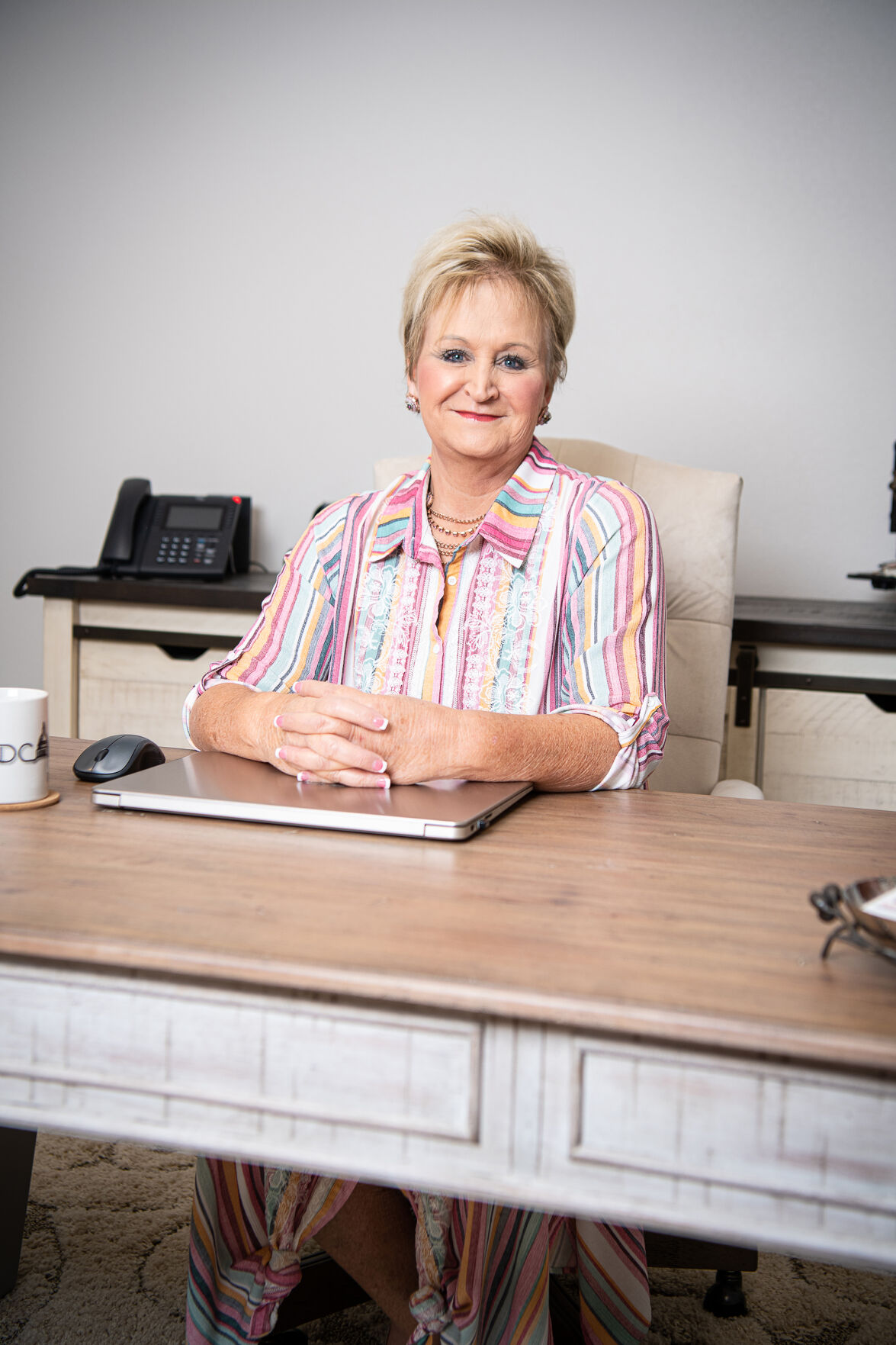 Stitchin’ Heaven owner Deb Luttrell is seen with her son, Clay Luttrell, who is also co-owner.

Customers talk inside Stitchin’ Heaven in Quitman, which opened in 1996 and has expanded.

A model longhorn is seen inside Stitchin' Heaven in Quitman, which opened in 1996 and has expanded.

Customers browse inside Stitchin’ Heaven in Quitman, which opened in 1996 and has expanded.

Deb Luttrell is surrounded by bolts of fabric inside Stitchin’ Heaven, which opened in 1996.

Deb Luttrell is shown with her dog, Jack. Luttrell opened Stitchin’ Heaven in Quitman in 1996.

Deb Luttrell moved to East Texas more than 20 years ago with a plan to raise emus.

The emu farm never happened. However, Luttrell had a vision to open a shop that would appeal to people who enjoy quilting and sewing. That vision led to Luttrell opening a small sewing center in Quitman.

“I opened my business after leaving a corporate job and moving to the country,” she said. “Fortunately, we never got into the emu business. God saved us from that. But that was why we moved to the country and bought the property.”

Before opening the center, Luttrell said she had only dabbled in quilting.

“I had made maybe two quilts, but I loved the hobby. and I loved the creativity of it and the fun and the friendships,” she said. “So, I thought it would be so cool to own a quilt shop.”

Luttrell said when it came to naming the shop, she wanted a name that would reflect more than just quilting.

“A friend of mine was an avid cross stitcher, and that was during the time when cross stitch was so popular,” she said. “At that time it was our idea that we would have a store that offered quilting and stitching supplies for cross stitching, and we came up with Stitchin’ Heaven.”

“We closed our doors on March 15 because of COVID-19 orders to stay home, and we were just running our online business,” Luttrell said. “That weekend, I saw a YouTube video showing people how to make masks and I thought, this is going to be a big deal.”

After seeing reports of face mask shortages, Luttrell gathered her team, and they began making face masks from their stockpile of fabric.

“Monday morning we came in and we set ourselves up mainly as a distribution center,” she said.

The team created a YouTube tutorial and encouraged their community of sewers to make masks for their local facilities or to send their masks to Stitchin’ Heaven for distribution and delivery to those in need.

The efforts of Luttrell and her Stitchin’ Heaven team caught the attention of Clarkson.

“I was contacted by their producer and she interviewed me and asked what was going on,” Luttrell said. “She said Kelly has this Zoom program that she is broadcasting from her home in Montana, and she would like to have three individuals who were involved in this mask-making initiative across the country.”

Luttrell said others participating in the segment included a fashion designer from Dallas and a woman from Florida whose nonprofit group mass-produced masks.

“It was very exciting,” she said. “We set Zoom up in the store, and Kelly was on with us and interviewed each one of us. It was a lot of fun.”

Since opening, Stitchin’ Heaven has grown far beyond just quilting and sewing.

The Bunkhouse, a 2,200–square-foot log cabin designed for small group quilting retreats, was built in 2000. In 2012, Lone Star Laser was started, making it possible to offer laser-cut fabric kits and pre-fused and laser-cut appliqué projects.

“Until COVID, we were offering 15 quilt cruises a year to our customers,” Luttrell said. “We have a conference center on the ship that we deck out with sewing machines and people come in and they take lessons during the cruise. It’s just a wonderful time.”

Luttrell said they also are building a 9,500-square-foot retreat center with 10 cabins.

“We’re very much a destination store,” she said. “We want to have a place where groups can come to retreat but also for someone who just wants to come and spend the night and enjoy the East Texas area. Quitman is a small town, but we’ve got a lot to offer.”

Clay Luttrell, who lives in Tyler, is amazed at how Stitchin’ Heaven has grown and the different directions it has taken.

“The last few years we’ve really accelerated that growth and the next few will be even better,” he said. “We grew by 64% last year, and we’re on track for 90% this year.”

Deb Luttrell said they are readying for Phase 3 of the expansion project.

“We started on our retreat center, and we’re building a pond right now that will be a part of the retreat center property,” she said. “We’re also going to build 25,000 square feet on the back of our 17,000-square-foot building. It’s amazing how much we’ve grown and how much we’re growing.”