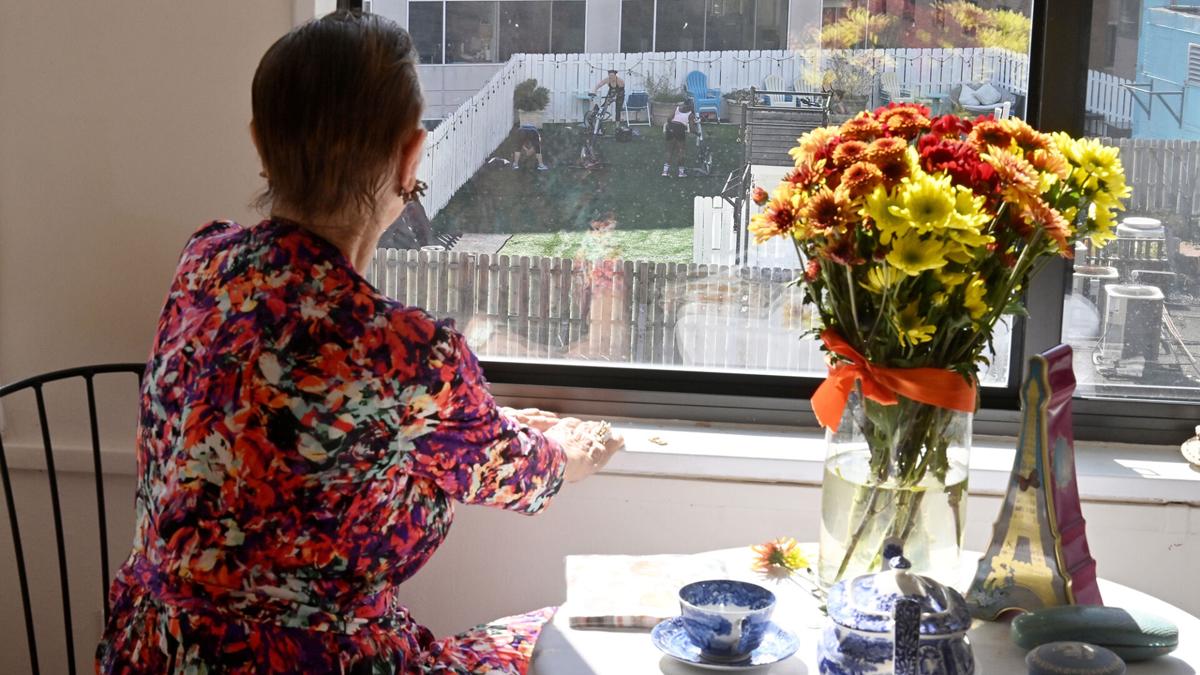 Tessa Sollom Williams, 90, lives in an assisted-living apartment and watches every day from her window as members of Balance Gym at Thomas Circle exercise on the roof of the gym. 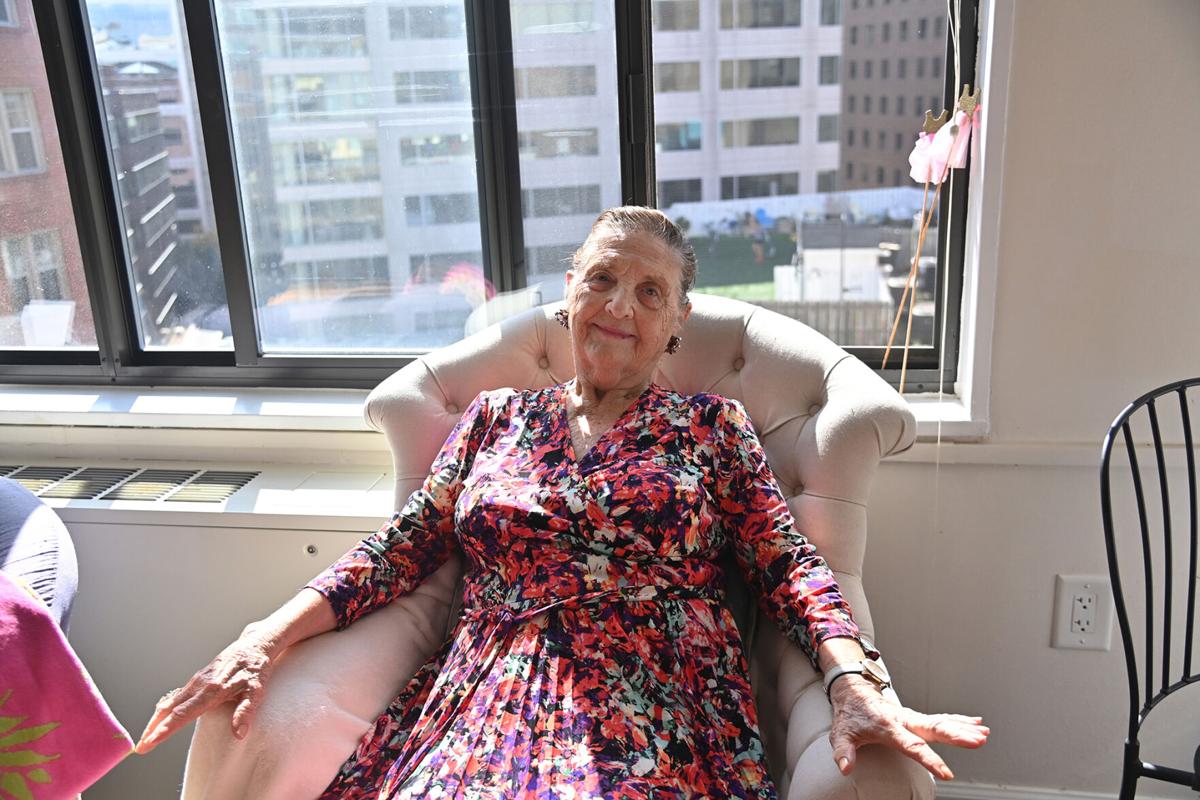 Sollom Williams moved to Washington, D.C., four years ago to be close to her daughter.

Tessa Sollom Williams, 90, lives in an assisted-living apartment and watches every day from her window as members of Balance Gym at Thomas Circle exercise on the roof of the gym.

Sollom Williams moved to Washington, D.C., four years ago to be close to her daughter.

For several months, Devin Maier has taught daily fitness classes on the rooftop of a D.C. gym. Until recently, though, he had no idea that a 90-year-old woman was keenly observing — all day, every day.

Tessa Sollom Williams, whose eighth-floor apartment faces the gym, watches the workouts from her window. Her spectating begins around 7 a.m., to coincide with the first class, and typically continues — often with a cup of tea — until the final workout session ends at 7 p.m. Occasionally, she tries to emulate the moves.

“I see them doing such hard exercises. My goodness me!” said Sollom Williams, who was born in London and in her youth was a professional ballerina for 15 years.

She now lives alone at an assisted-living facility, and observing the outdoor fitness classes has been her sole source of motivation and entertainment during the pandemic.

“I never miss it,” she said, adding that she gives her daughter an update on the classes during their daily phone calls.

Watching the training sessions has had such a significant impact on Sollom Williams that her daughter felt compelled to write an email to the Balance Gym at Thomas Circle to thank them.

“This is an odd email, but genuine. I am writing to thank your members for working out! My 90-year-old mother lives at Thomas Circle on the 8th floor facing your rooftop,” Tanya Wetenhall wrote Oct. 9. “... Seeing everyone on the roof, working out, and keeping up with their routines has given her hope.”

“Her worst days are rain days and she worries if your members are okay and getting their exercise,” she continued. “I hope you can share with your members that they have given an elderly lady much joy in seeing them embrace health and life.”

For the gym staff, the unexpected email was a bright spot after months of coronavirus-induced business challenges.

“It made our day. It was very timely and much-needed,” said Maier, 39, co-chief executive and part-owner of the gym, explaining membership has dwindled and times have been tough.

After receiving the message, the staff wanted to honor Sollom Williams and any other onlookers who might be watching the fitness classes from afar. They decided to paint an outdoor mural featuring a boldly written message: “Keep Moving.”

“The alleyway isn’t necessarily a beautiful view,” Maier said. “Our building is old, and it’s kind of ratty, but the email got us thinking: If we were looking out the window every day, what could we put up there to give people a reason to be inspired and motivated to keep moving?”

The gym occupies all four floors of the building and has three other locations across the city. Pre-pandemic, the gym had more than 2,000 members.

“We’re at half of that right now,” said Maier, adding that at the height of the lockdown, the gym pivoted to virtual classes before slowly reopening.

“As soon as the pandemic hit and we were forced to close, we started renovating our rooftop and second-floor landing,” Maier said.

Since late May, when D.C. entered Phase 1 of reopening, Maier and other fitness instructors at the gym have been using a 4,000-square-foot rooftop to teach a variety of socially distanced classes.

Little did they know how much the renovations would also benefit neighbors such as Sollom Williams.

“I love watching them,” said Sollom Williams, who danced with the International Ballet — a British ballet company that was directed by famed dancer Mona Inglesby.

“It was quite an unbelievable amount of work,” reflected Sollom Williams, who moved to the United States in 1961. “But well worth it.”

After the ballet company closed in 1953, Sollom Williams moved to Paris, where she danced in nightclubs. There she met her husband, who was a tap dancer.

His catchline was: “Direct from America, Tall, Dark and Dancesome, Stan the Man,” Sollom Williams said. “Everyone was raving about this young American. Eventually, I married him.”

Stanley Williams was originally from Spokane, Wash., and shortly after the pair met, he wanted to move back to America. Though hesitant to leave Europe at first, Sollom Williams joined him, and they had two children. In Spokane, she continued to pursue her passion for dance, opening her own ballet school, which she ran for 34 years.

Sollom Williams moved to D.C. after her husband died four years ago, to be close to her daughter, Tanya Wetenhall, 53, who is a professor of design history and theater at George Washington University.

“It was so hard for me during lockdown to have my mom over here,” said Wetenhall, explaining she has only recently been permitted to visit her. “The workouts were the one thing she kept bringing up on every phone call we had. She always remarks about how hard they’re working.”

From the vantage point of her mother’s apartment window at Residences at Thomas Circle, “you don’t see anything but other buildings around. But then there is this little patch of life,” Wetenhall said.

As an older adult, Sollom Williams is avid about physical fitness and regularly attended exercise classes at the retirement home before sessions halted in March.

Although virtual exercise classes are offered to residents, “mom is part of the generation that can’t use a computer at all,” said Wetenhall.

“This is what I watch,” Sollom Williams responded, gazing out the window, tea in hand, as the final yoga class of the evening wrapped up. “Half the time I can’t find the remote for the television.”

For Wetenhall, the decision to reach out to the gym was obvious, she said.

“In a way, this was a lifeline for her, to see people in motion,” Wetenhall said. “You think you’re doing something for yourself, but it’s really a thread of life that’s being extended to someone else.”

Maier echoed her sentiment: “We sometimes don’t realize that we can potentially inspire others just by training and going about what we do on a daily basis,” he said. “If we can get people stuck inside moving in their bedrooms, even just a little bit, I think that’s extra special.”

Several volunteers recently gathered to paint the mural, spearheaded by Madelyne Adams, 29, a local graphic designer and muralist who donated her time to help with the project.

“It’s been incredibly rewarding for me to use my technical skills to give back to other people and help small businesses and nonprofits,” said Adams, adding that she has worked on several pro bono murals throughout the pandemic.

“Lifting each other up is so incredibly important right now,” she said. “I love the domino effect this story shows; the gym has been working so hard to support their members, and by working out, the members’ perseverance meant a lot to someone just looking out their window.”

Seeing the finished mural for the first time, Sollom Williams was elated.

“I hope it reminds people that they have to smile and stay determined,” she said. “Keep moving, no matter what.”